Italian firm  noa* – network of architecture has transformed an over 160 years old refuge in South Tyrol into a new model of hospitality serving as a good example of responsible tourism. The nineteenth-century barns are reborn as mini-chalets, which bring back the charm of an alpine village. Here, the South Tyrolean tradition is combined with comfort, quality of design and sustainability. The eco-friendly hotel was built with maximum environmental protection in every aspect of the construction. 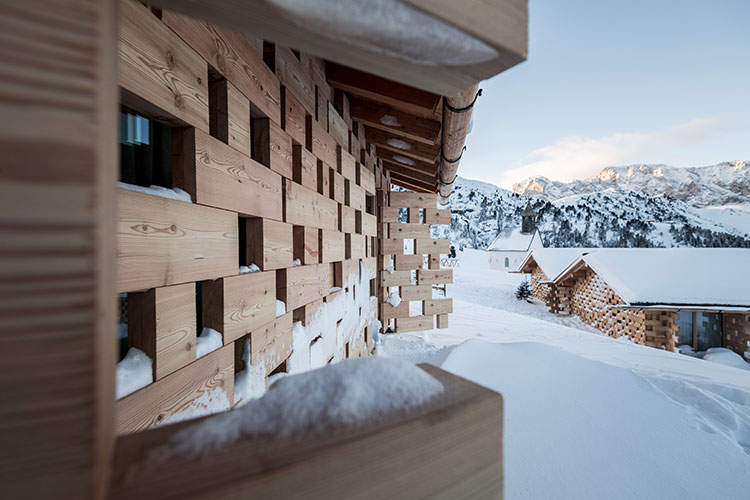 The project, completed in 2017, has created new spaces without altering the existing volumes of the Zallinger Refuge in the Alpe di Siusi area, and at the same time has returned to the historic settlement with the characteristic of the original small village. Through the solutions and materials adopted, the magic of that era was brought back to life, in both respects for the environment and traditions.

The Zallinger Hut was first built in the middle of the 19th century at 2200 meters, below the Sassopiatto. It was formerly surrounded by seven barns and a small church. Subsequently, the barns had been replaced by a single large building (1880), which over time had assumed other functions. The extension was an opportunity to revive the original structure, proceeding, as well as the restructuring of the central body of the hotel, the demolition of the former barn and the construction of seven new chalets arranged respecting the original plan of the site. 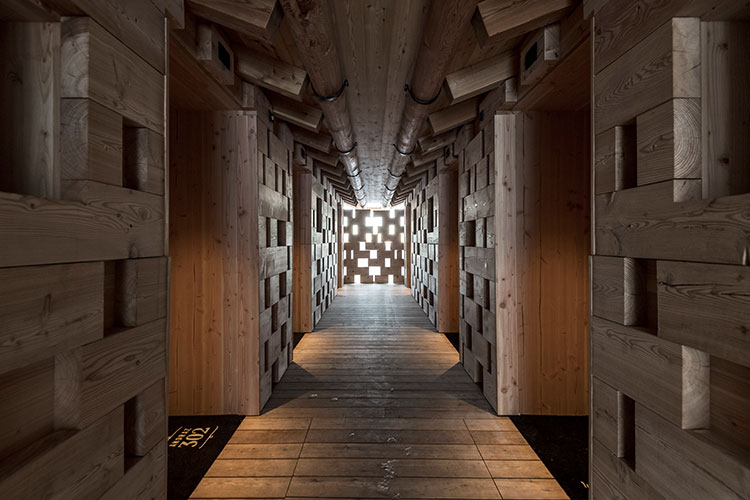 Noa*’s aim was to recover the traditional structure of the South Tyrolean mountain pastures in a modern way, which resulted in the design of the new chalets. The external claddings that surround the chalets are made of blocks of solid wood appearing to be stacked together in an alternation of full and empty spaces, becoming a dominant motif of the new settlement. The outcome, inspired by the structure of the ancient barns, avoids the annoying reflections of the exposed windows, inappropriate in a high mountain context. The wooden panels are designed to be able to open at the large windows, providing a view of the spectacular alpine scenery, while when they are closed create evocative light and shadows in the rooms, contributing to the relaxation of hotel guests. 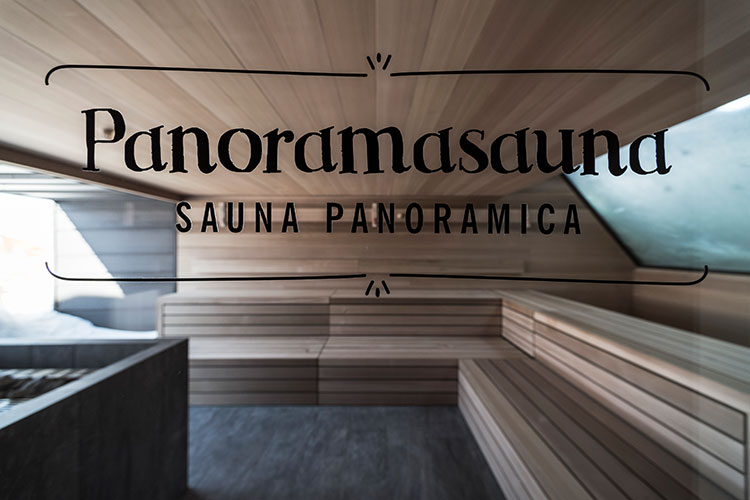 The wellness area stands in place of the pre-existing barn, as an independent building, with a metal-plated structure branches out, that houses the sauna, an awe-evoking environment, from the spatial point of view, with two large windows overlooking the landscape: the first looks towards the valley; the second opens on Mount Sassopiatto, with an inclination of 45 degrees (to allow the snow, during heavy snowfall, to flow to the base of the frame, leaving the view free). A relaxation area with a small distribution of hot and cold drinks completes the range of services, adding to the sense of comfort.

Sustainability, respect for the mountains and direct contact with nature are the principles that have guided all design choices. For example, in the design of the new rooms, careful use of the space was made to provide high levels of comfort in relatively small sizes; the roofs wood shingles, typical of the South Tyrolean tradition were used.

All the materials have been certified and the complex of buildings, heated by pallets, has obtained the Clima Hotel certification. It was even decided not to illuminate the paths connecting the chalets and the shelter, to avoid light pollution and allow guests, equipped with lanterns, to admire the charm of the starry sky. 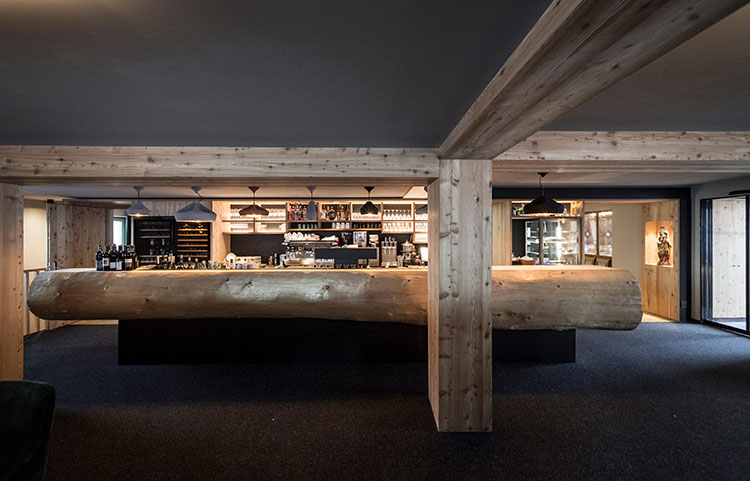 The interior of the rooms is cozy and warm with a modern mountain-lodge character. The materials are inspired by the traditional hunter’s clothing; cushions with knitted details and felt. Some rooms have a small loft that can be used as a bedroom for kids or just a relaxing corner. The sustainable mission of the project is also expressed in the fact that the property has renounced the ‘4 Stars’ classification of the hotel, in order not to increase the volume of the building to the detriment of a negative impact on the landscape: Zallinger’s challenge is to offer a receptivity luxury through the quality of the spaces and services without increasing the surface square meters in a macroscopic way. 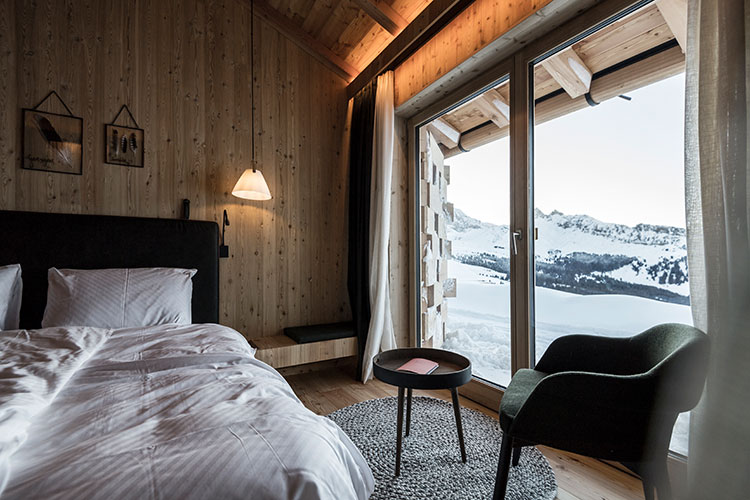 It is significant that along with the refurbishment of the Zallinger Refuge, a plan has also been launched to minimize the flow of cars in an area that has seen strong visitor growth in recent years. Starting in 2014, the Zallinger property, with the support of noa *, involved the managers of 6 other refuges in the area in the construction of a single collection point for the guests’ cars located in the valley. This structure is nearing completion, but already in 2017 the arrivals to the guesthouses occur only by bus or, in winter, with the ‘snow cat’. 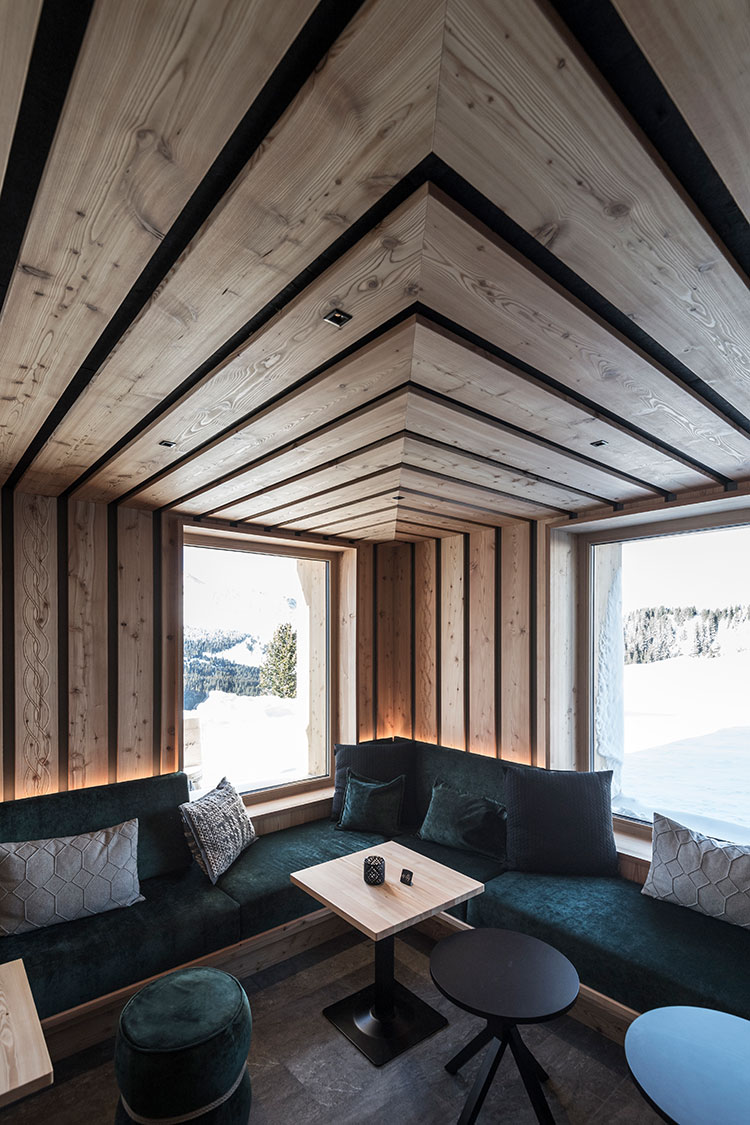 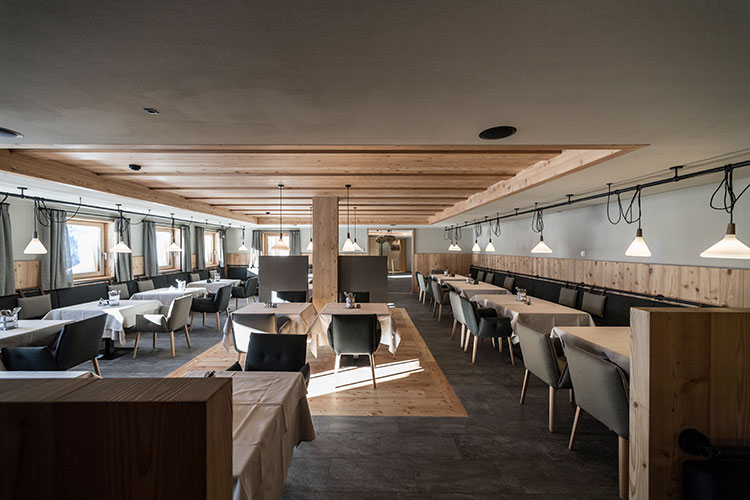 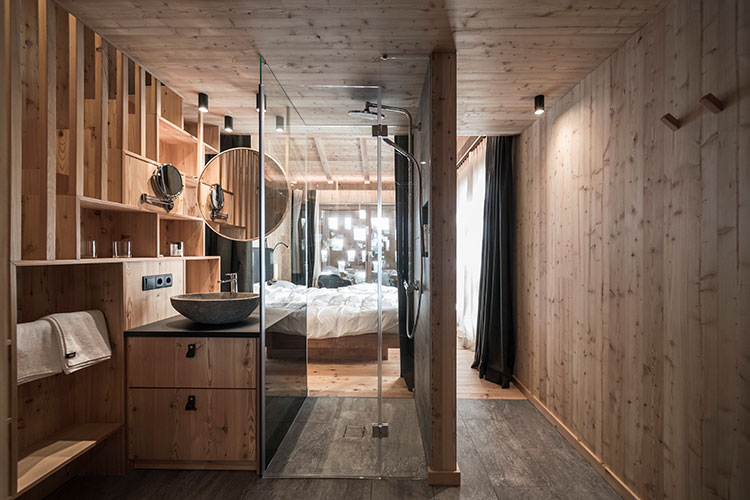 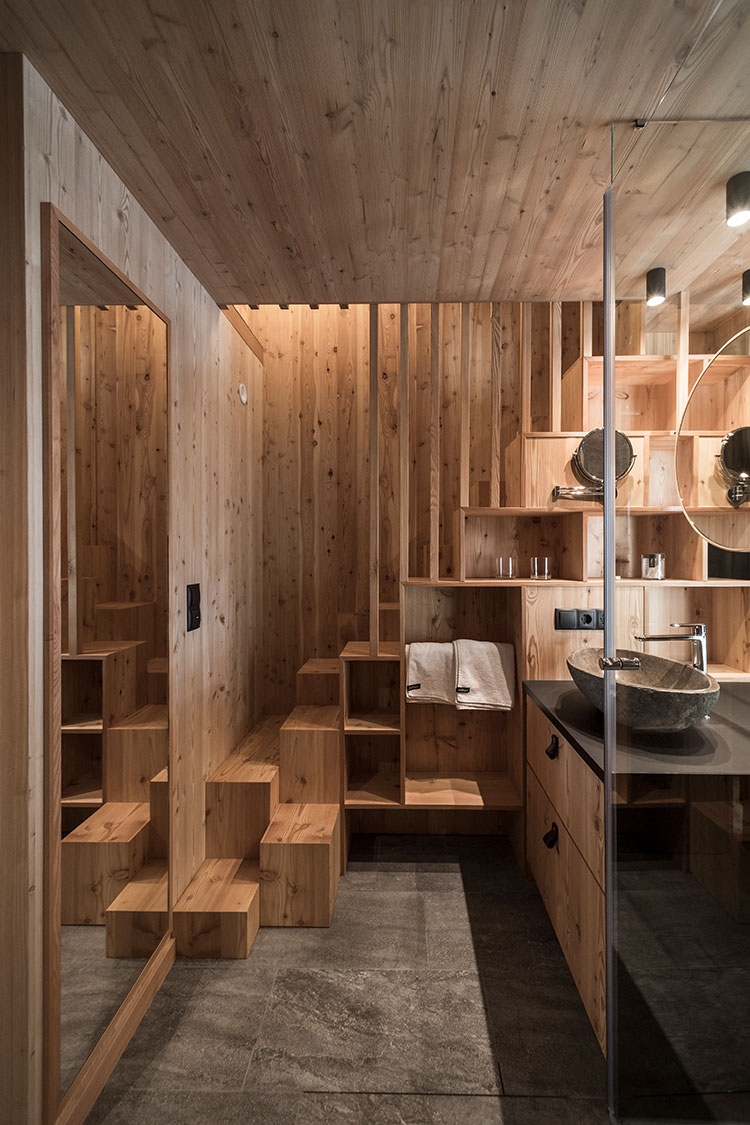 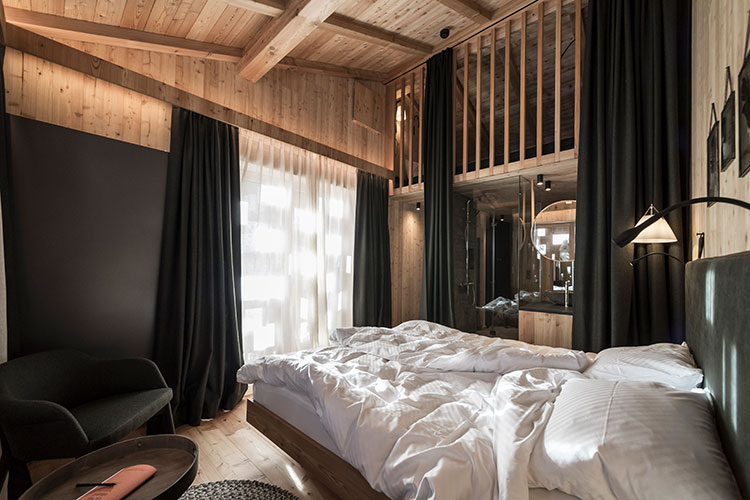 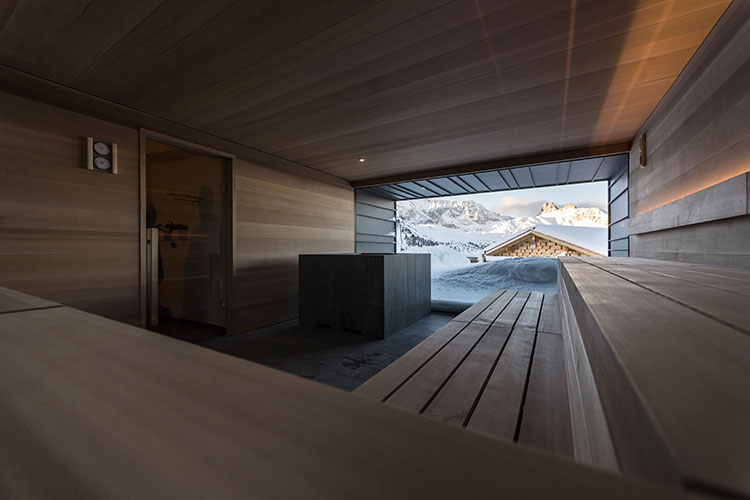 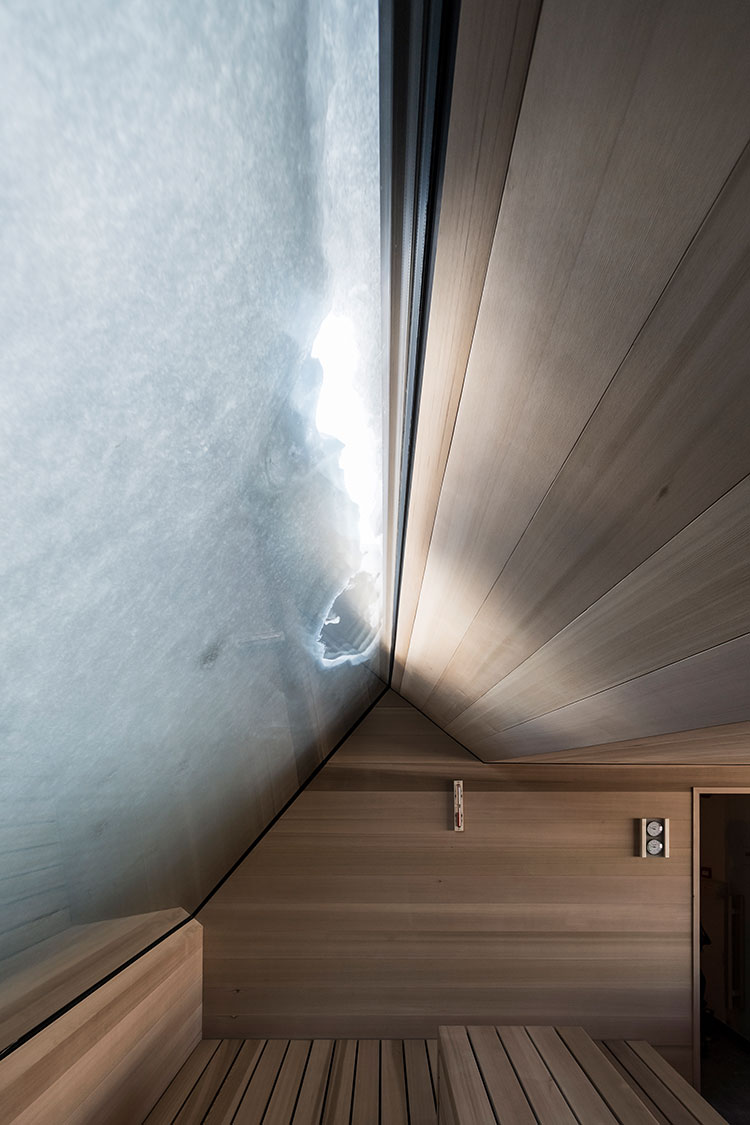