When you think of a dim sum restaurant, what first comes to mind? Often, one of the first impressions of a dim sum restaurant is that it looks just like any other traditional Chinese restaurant. Some may even look small and run-down, due to it standing the test of time in traditional Hong Kong. But, there are also those that stand above the rest. There are restaurants that now also have that added mix of both a modern and traditional design, but well very thought of. One of these is John Anthony, as discussed below.

The Concept Of John Anthony

Designed by Chinese studio Linehouse, John Anthony is a contemporary dim sum restaurant located in Hong Kong. The concept for the restaurant is drawn from the historical figure John Anthony, the first Chinese man to be naturalized as a British citizen in 1805. John Anthony, an employee of the East India Company, embarked on the voyage from the East to West arriving in Limehouse, the east end docklands of London. There his job was to ensure lodgings and food for arriving Chinese sailors. He became the father of Limehouse’s Chinatown. 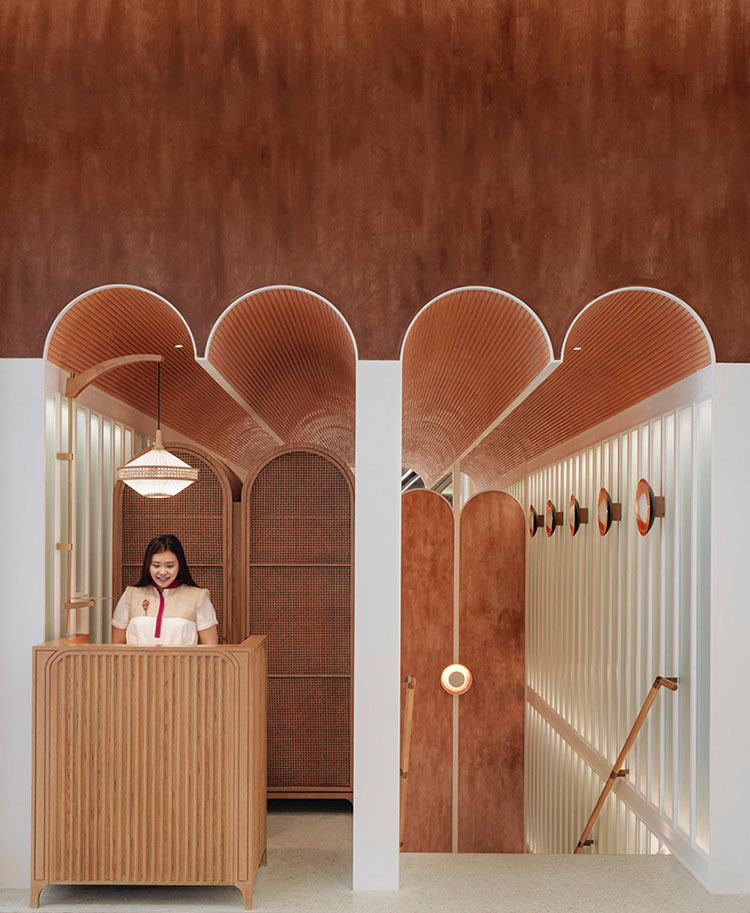 The design drew on John Anthony’s journey, exploring the fusion of architectural styles and materiality between East and West and colonial architecture blurred with eastern detailing, to create a British tea hall turned Chinese canteen.

Arriving guests are transported down a vertical staircase of white metal and back lit diffused glass. The entrance captures a glimpse of what is to come: terracotta render walls with a triple height arched ceiling clad in pink tiles, and a lime green terrazzo floor. Infinite reflections of the arches are captured in the high-level mirrors. 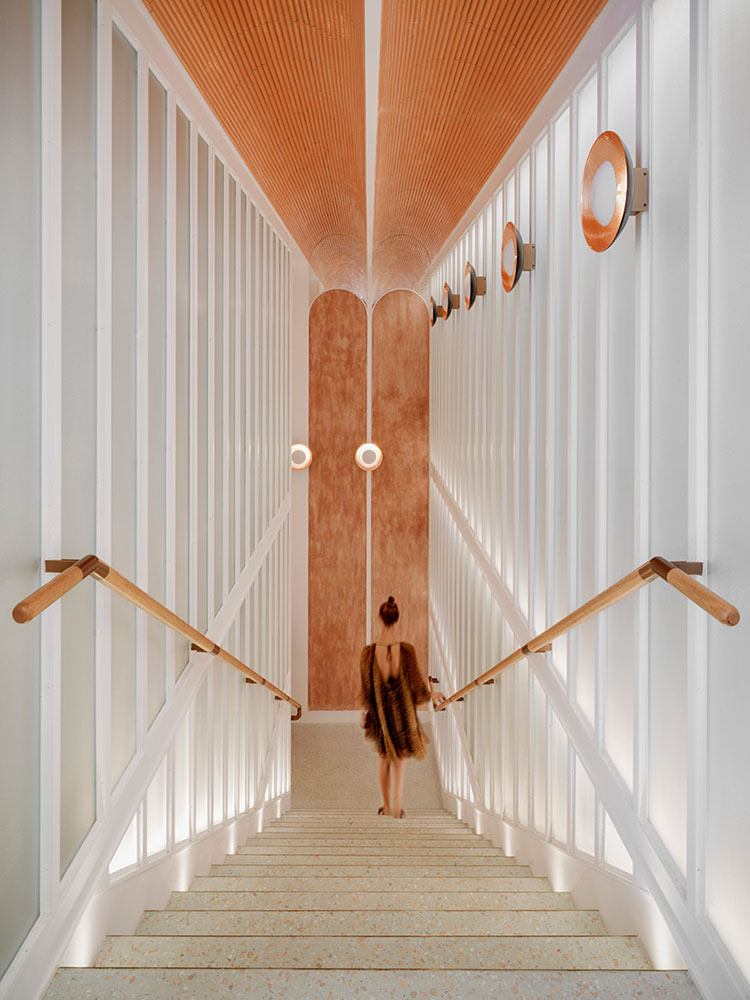 The main dining hall in the restaurant is an interpretation of the storehouses in the docklands. The modern vaulted space plays on verticality, lightness and has a sense of whimsy with circular canopy columns in a dusty pink lacquer and white metal arches surrounded by terracotta render.

Linehouse plays on the retro nostalgia of the Chinese canteen, fusing this with colonial detailing captured in the details of the timber bar with glass vitrines, wicker leaners and furniture, and gold and maroon floral fabrics. A collection of infused gin tubes hang vertically above the bar, infused with blends of botanicals found along the Spice Routes. With this, despite the modern feel that one can have when inside the restaurant, you still have that very traditional, Chinese atmosphere. But, it’s a far cry better than the usual red and gold color mix that Asian restaurants usually have.

At high level the arches are backlit with diffused glass, allowing for shifting light qualities throughout the day and night. This arched structure hovers above the bar displaying an expansive gin collection behind glass vitrines. A white metal structure hangs from the render ceiling reminiscent of an industrial storehouse, suspending custom timber tube lights. Bespoke hammered copper lights line the walls. 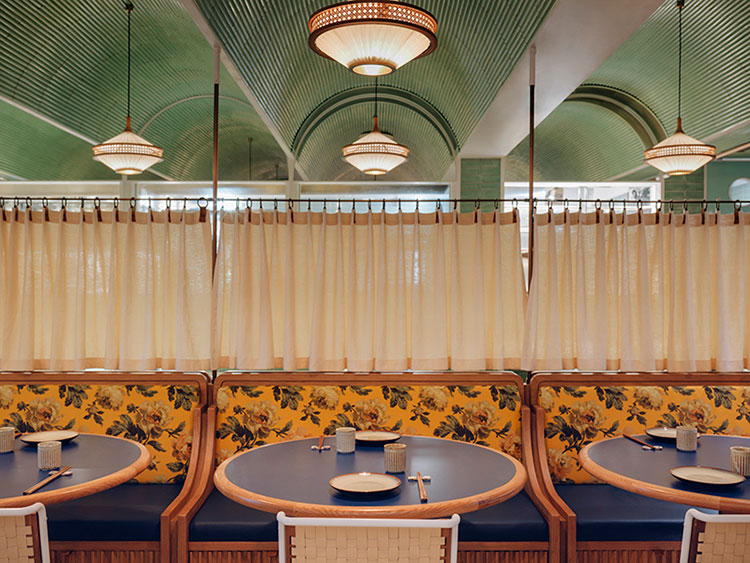 Yes, this is a dim sum restaurant like no other. It’s not all the time that you’ll find a bar placed within a restaurant that has dim sum as the main offering.

Beyond the dining hall, a series of arched spaces allow for more intimate dining. The arches are clad in handmade tiles in green and blue, framing views of the kitchen and the spaces beyond. These spaces can be screened for privacy from the main hall by turquoise curtains. This allows for more privacy, which is also representative of traditional Chinese restaurants with individual rooms for small conferences or meetings, usually by family members, or for businessmen.

Along that line, see more about these kinds of design from the eyes of another excellent designer, Eimer Design. Should you also be in the pursuit of opening your own restaurant, these are pegs for you to be inspired by. 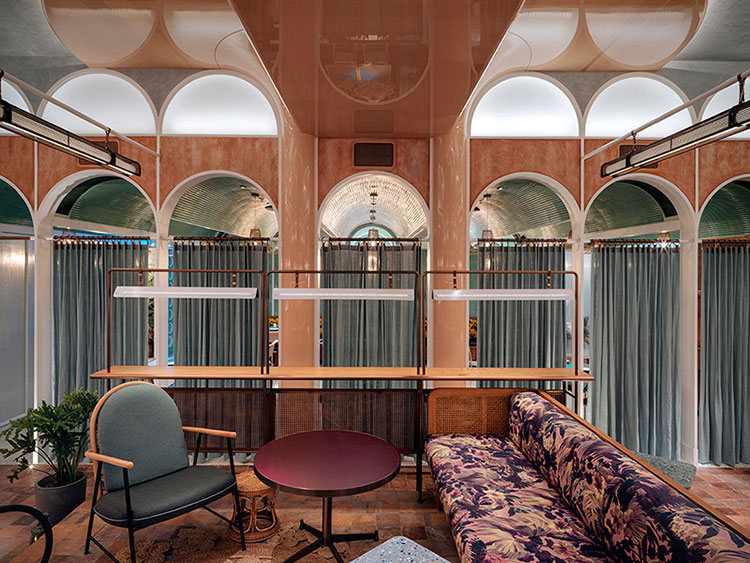 Linehouse explored the materials John Anthony would have encountered on his journey: hand-glazed tiles, natural and racked renders, terracotta, hand dyed fabrics and hand woven wickers. The private dining rooms are lined in hand-painted tiles featuring large-scale illustrations of commodities traded between the British and Chinese in the 18th century such as medicinal poppies and exotic animals. The room is enveloped by a hand racked arched plaster ceiling. Reclaimed terracotta tiles pave the main dining hall, sourced from abandoned houses in rural China.

An intimate room behind the bar welcomes guests to be seated on floral booth seats, allowing glimpses of the bartenders beyond. Cream linen curtains hang on a copper rail, dividing each booth and billowing hand dyed indigo linen envelops the ceiling recalling nautical qualities. Remember that during this time, travel and exploration by the rich were also done through magnificent nautical journeys in big ships. 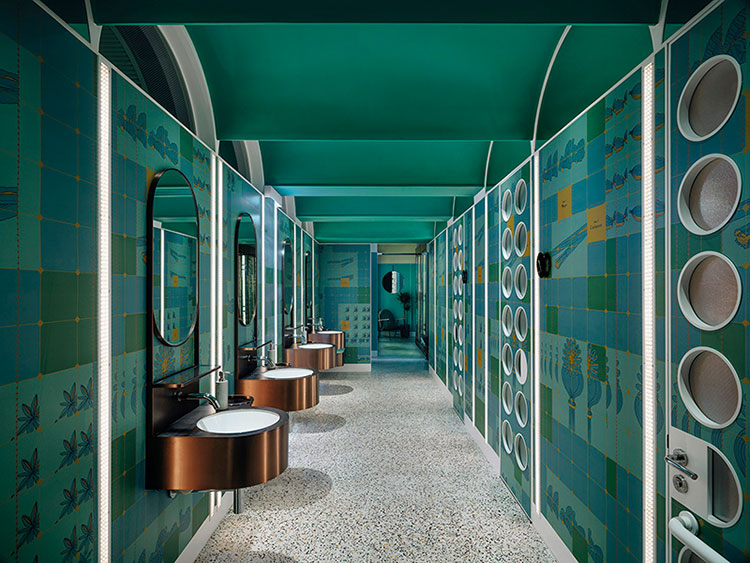 The bathrooms reference the spice trade, with a custom laminate in green, mustard, and turquoise framing the space, custom copper mounted vanities, and a green arched ceiling. Recycled plastic tubes line the ceiling of the bathroom stalls.

At the heart of the venue is a sustainable message, woven into every aspect of the interior and operations. From upcycling wasted plastic and paper into coasters and menus, to tiling floors with reclaimed terracotta and using highly sustainable rattan, every element incorporates an eco-friendly or ethical initiative. The kitchen uses traceable ingredients from sustainable food suppliers and employs equipment to reduce energy usage. Wines and spirits are sourced from environmentally responsible vineyards and craft distilleries.

These materials and descriptions would only go to show that Chinese restaurants today, even in other major cities in China, are getting more modern and open-minded with its design. This fact alone makes it even more attractive to tourists that wish to see China in a more modern light. 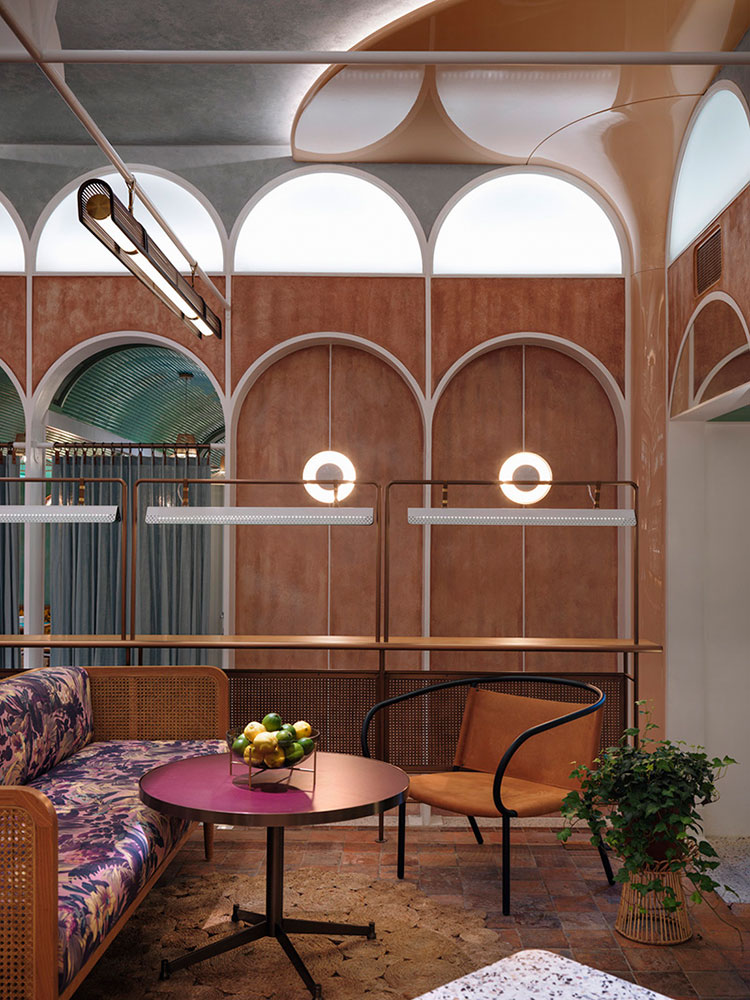 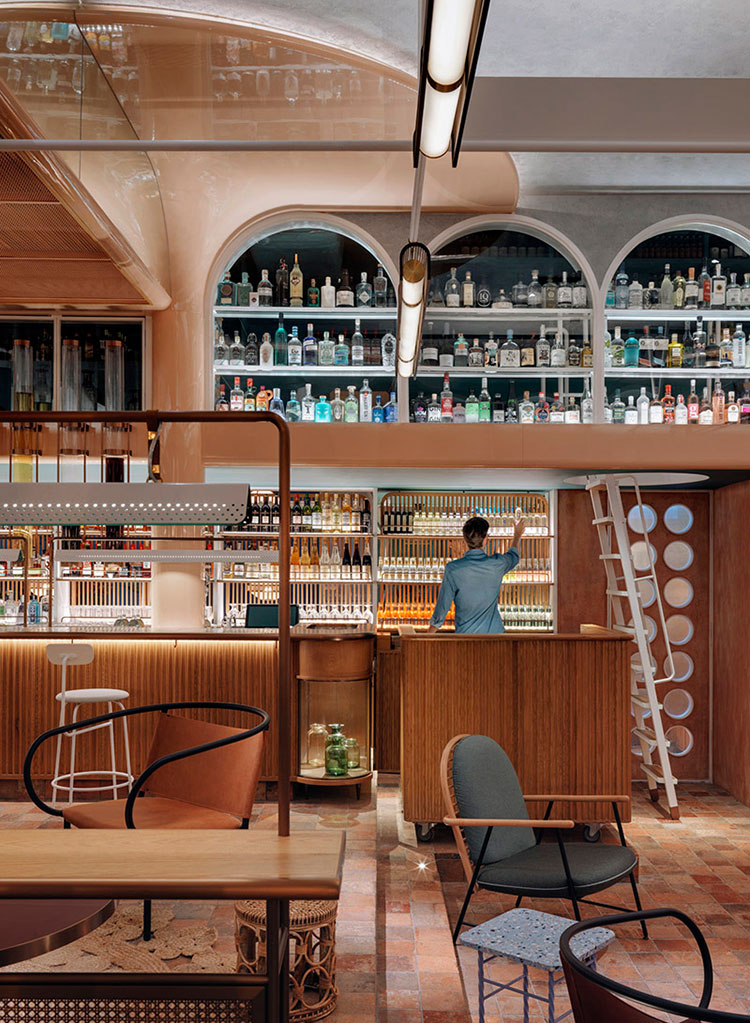 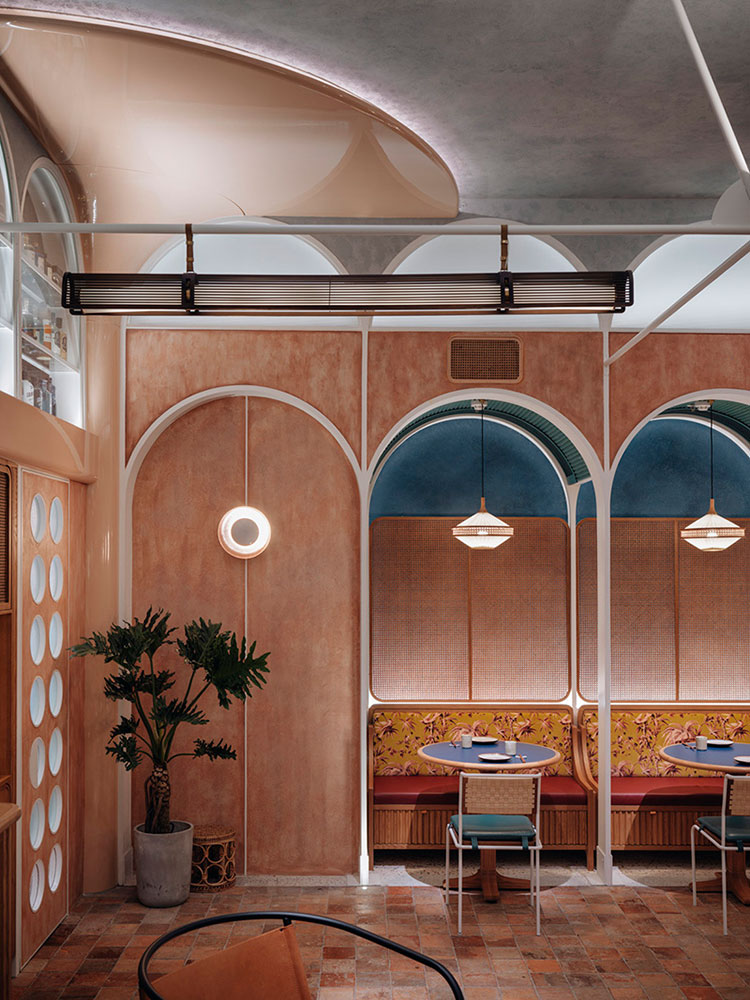 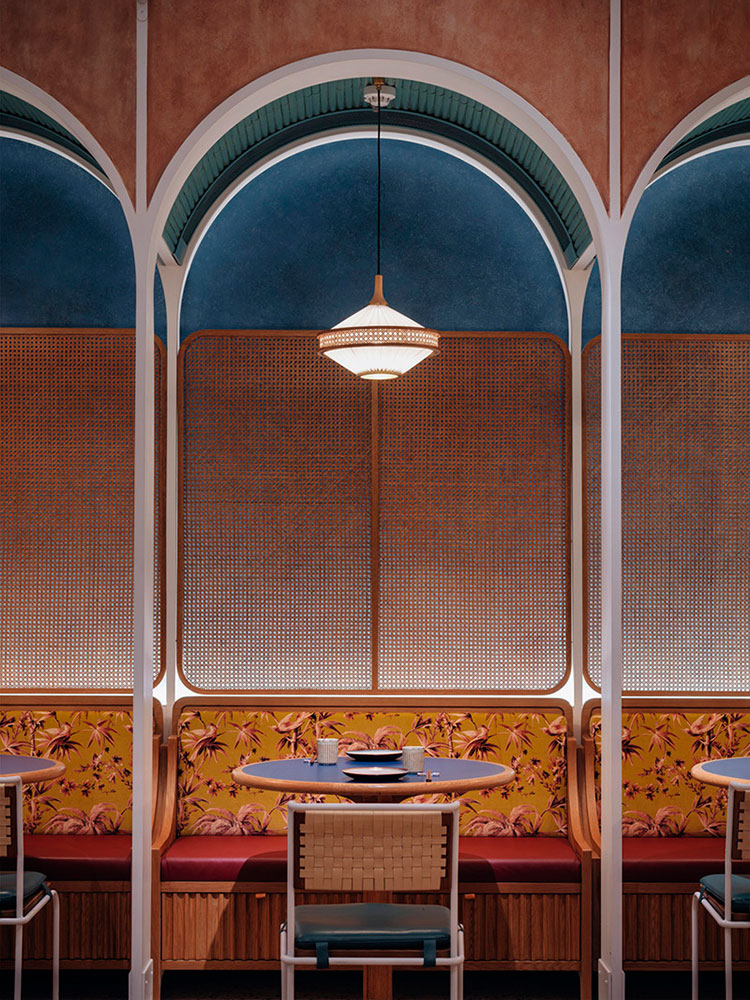 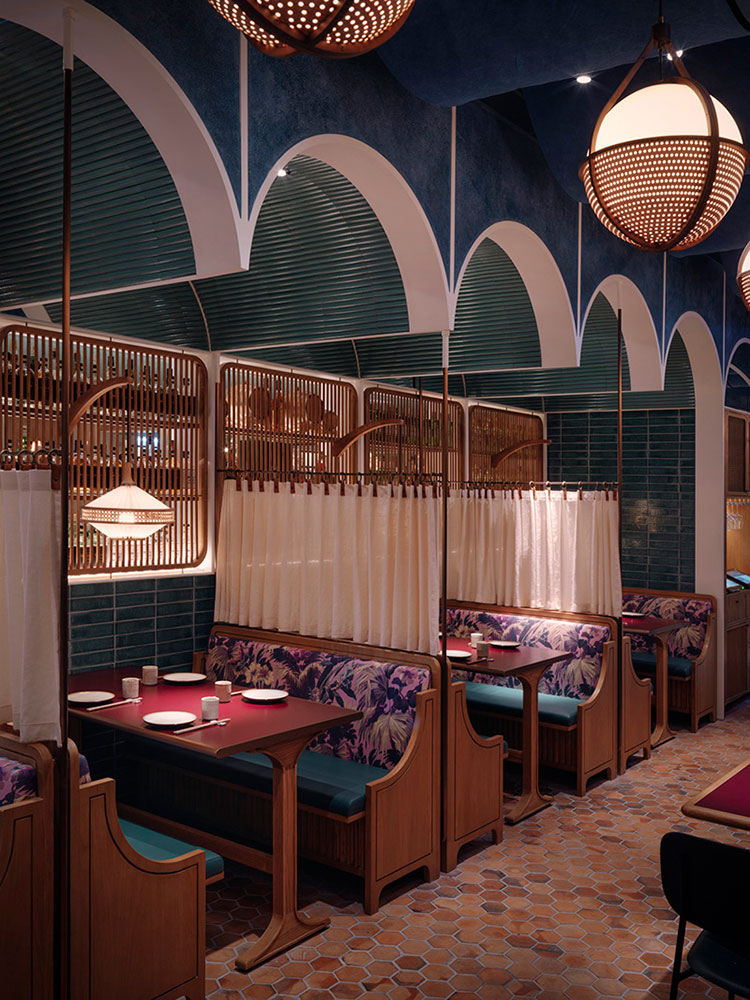 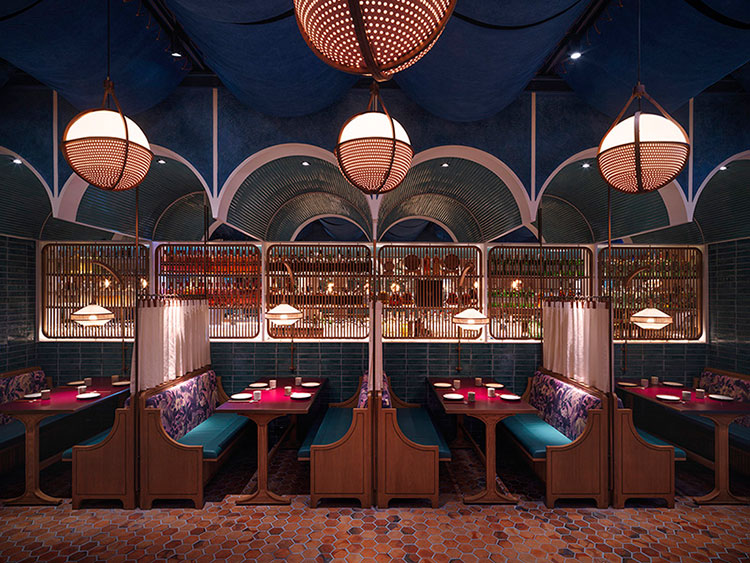 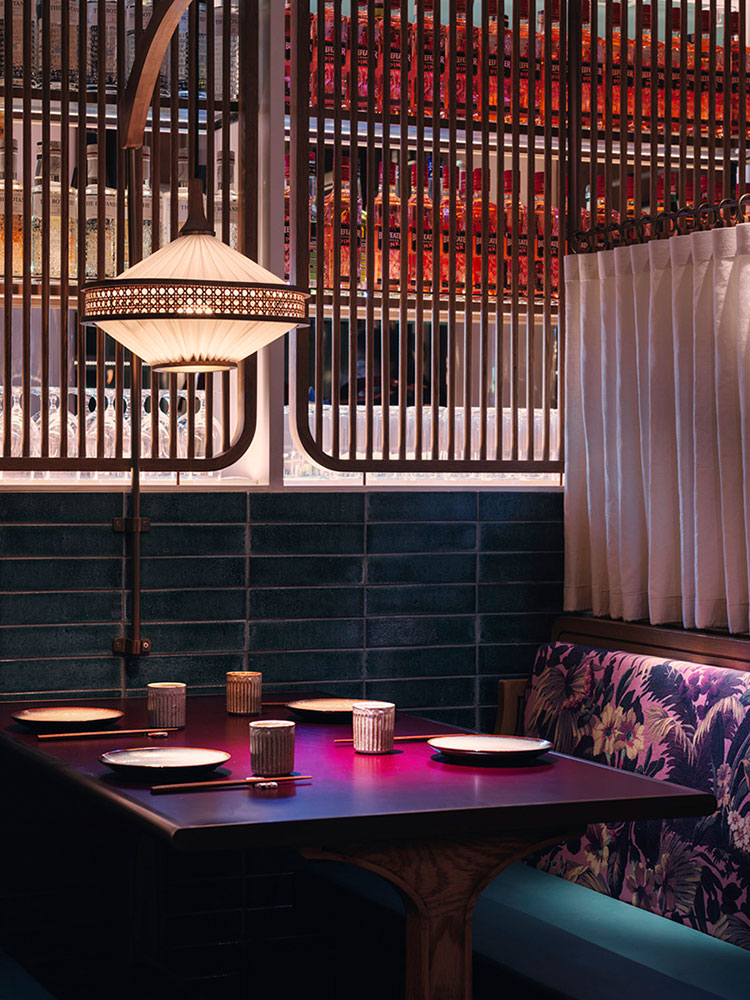 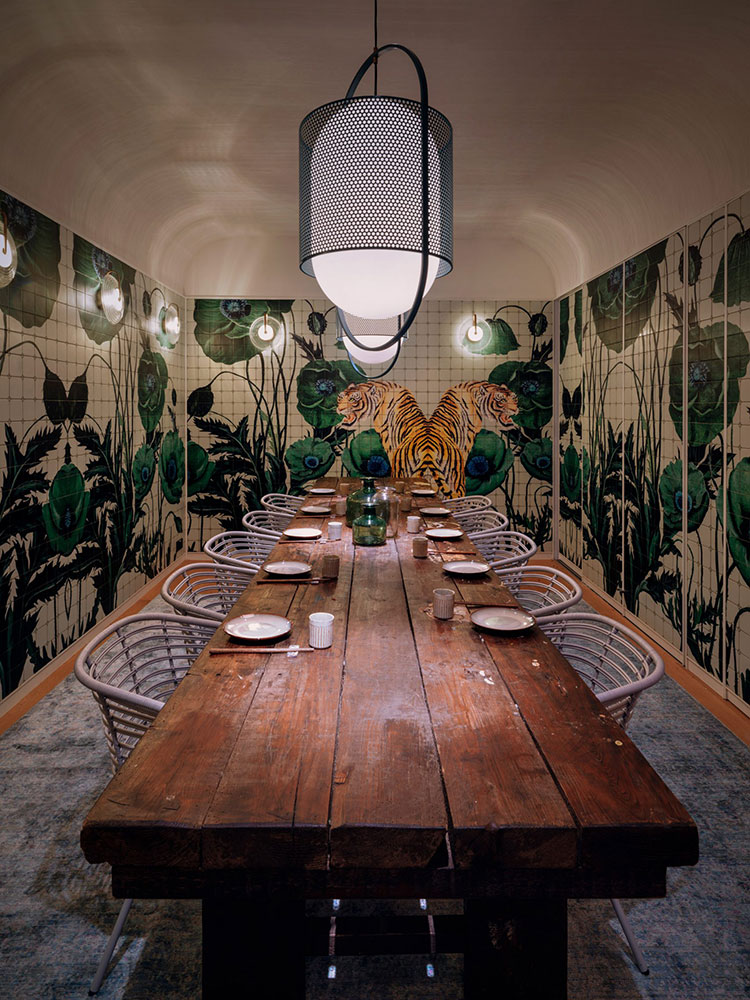