Following the opening of its first location in Italy, Starbucks Reserve Roastery New York has opened its doors in Downtown Manhattan. Located in the meatpacking district at 61 9th Avenue (on the corner of 9th Avenue and 15th Street), the New York location marks Starbucks fourth Roastery and second location in the U.S.

The immersive coffee experience – across nearly 23,000 square feet of retail space – celebrates the heritage of roasting and the craft of coffee. The sights and sounds of coffee’s journey from bean to cup are reflected at every turn in the thoughtfully designed environment. The New York Roastery joins locations in Seattle, Shanghai and Milan with future openings coming to Tokyo and Chicago in 2019. urdesignmag was invited to be among the first to see the space during an exclusive preview event.

“We designed the Roastery as the pinnacle experience around all-things-coffee, and there is nothing else like it in the world. With premium coffees, teas, mixology and the iconic Milanese Princi Bakery, it serves as a Starbucks brand amplifier and a platform for future innovation,” said Kevin Johnson, Starbucks ceo. “Beverages such as Draft Nitro, Cold Foam and the recent launch of Juniper Latte all began at the Roastery and have since been introduced to Starbucks locations around the world. It is the ultimate Starbucks Experience and an unforgettable way to connect with our customers.” 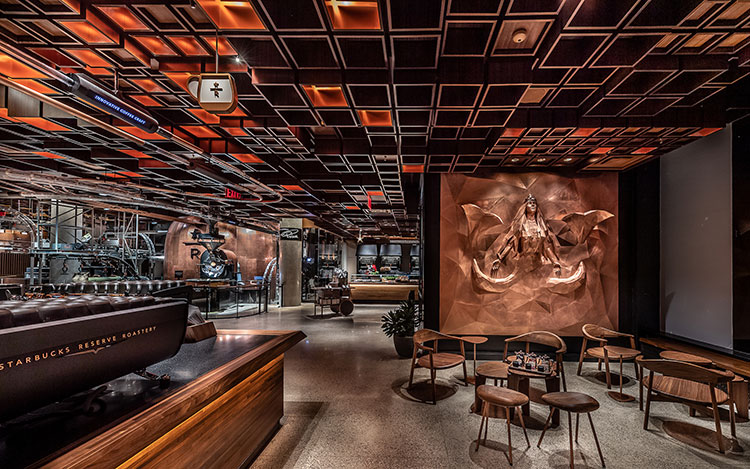 Starbucks has a long history in New York. In 1994, Starbucks chairman emeritus, Howard Schultz, who was born and raised in Canarsie, Brooklyn, opened the first Starbucks store in the city on Broadway and 87th Street on the Upper West Side. Nearly 25 years later, there are 350 Starbucks stores across the five boroughs in the city where Starbucks employs approximately 5,000 partners (employees). The Roastery employs nearly 300 people, including roasters, baristas, commessas and mixologists. 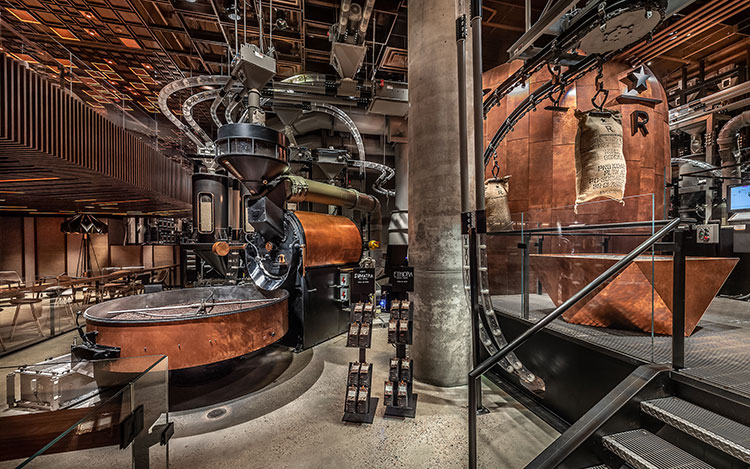 “Like most people I first experienced Starbucks as a customer, where I would go to my store at 195 Broadway in the Financial District in New York City and order a tall latte which was the perfect way to start my day,” said Reserve Roastery New York managing director Raul Adorno. “I look forward to welcoming my fellow New Yorkers and visitors from all around the world when we open the Roastery on Friday. You will be amazed.”

At its core, Starbucks Reserve Roastery New York is a working coffee roastery, where every day Starbucks Master Roasters, who have trained for years in the craft of coffee roasting, will be small-batch roasting Starbucks rarest single-origin coffees and blends called Starbucks Reserve. Those coffees then get served fresh at the Roastery or shipped to Starbucks Reserve stores across the U.S. That functional purpose, as well as the history of industry and manufacturing in the meatpacking district, is reflected in the design of the space.

“New York is a hub to the world,” said Liz Muller, chief design officer of Starbucks. “It’s an unbelievable place with such history. The meatpacking district has a fantastic history of industry, and the neighborhood has an electric energy; it is alive. We’ve designed a space where the excitement and dynamic activity of the neighborhood is mirrored in the Roastery. We want our customers to come in and feel very inspired.” 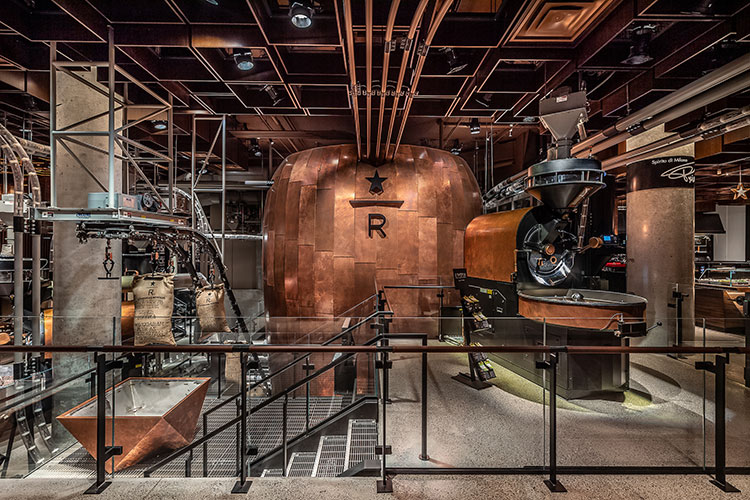 There are two coffee bars at the Roastery, which in total offer seven brewing methods, including pour over, Chemex, coffee press, siphon, espresso, Clover and cold brewing. Upon entering the Roastery, visitors can visit the coffee bar on the main level, where baristas, called coffee masters, are crafting classic espresso beverages such as cappuccino, latte, cortado and specialty drinks such as whiskey barrel-aged cold brew, sparkling citrus espresso, nitro hopped apricot cold brew and rotating specials like the cardamom latte. 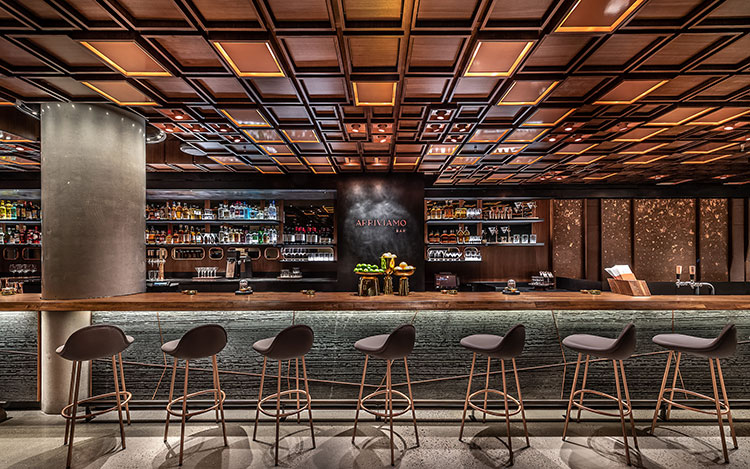 For the first time in the U.S., Starbucks will debut Arriviamo Bar inspired by the Italian tradition of aperitivo. This craft cocktail bar is located inside the Roastery where expert mixologists will serve coffee- and tea-infused cocktails curated by award-winning mixologist Julia Momose. Specialty cocktails include the Nocino Notte, made with cold brew coffee, gin and black truffle salt, and the Triomphe, made with Teavana/MC Darjeeling de Triomphe Tea, gin, dry Riesling, aquavit, passionfruit sparkling water and orange saffron bitters. The Arriviamo Bar will also serve a selection of beer, wine and classic cocktails. Inside the Roastery is the Milanese boutique bakery Princi from founder Rocco Princi, with on-site baking of fresh breads, Pizzas, cornetti, focaccias, desserts and more. 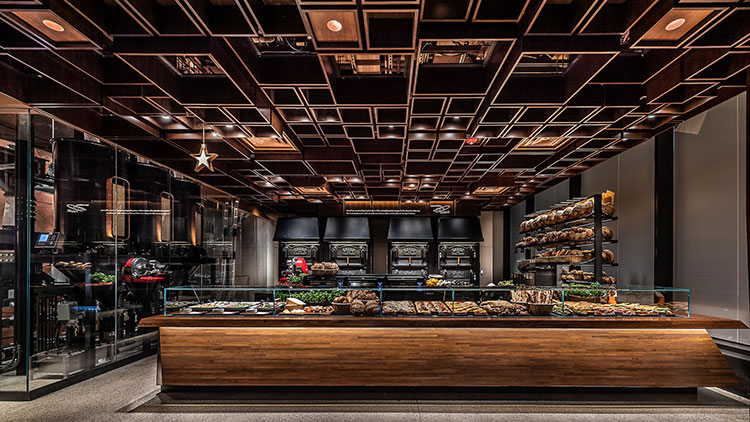 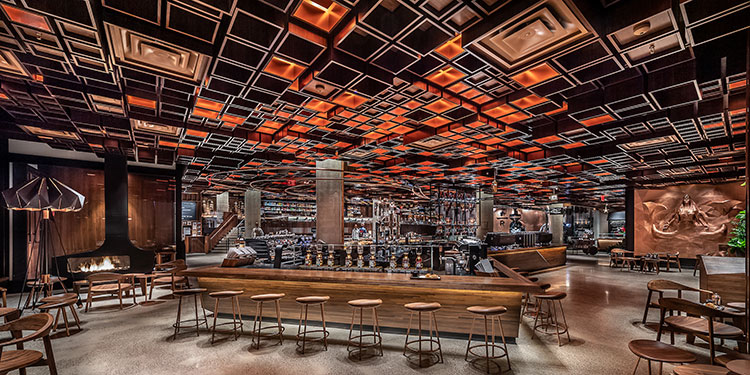 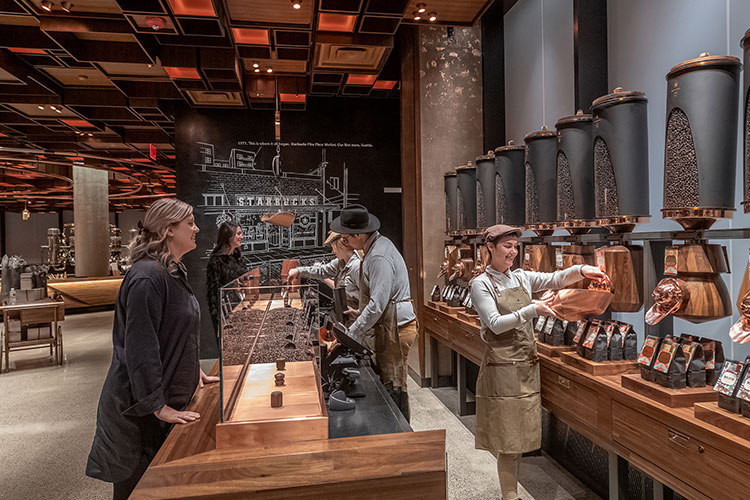 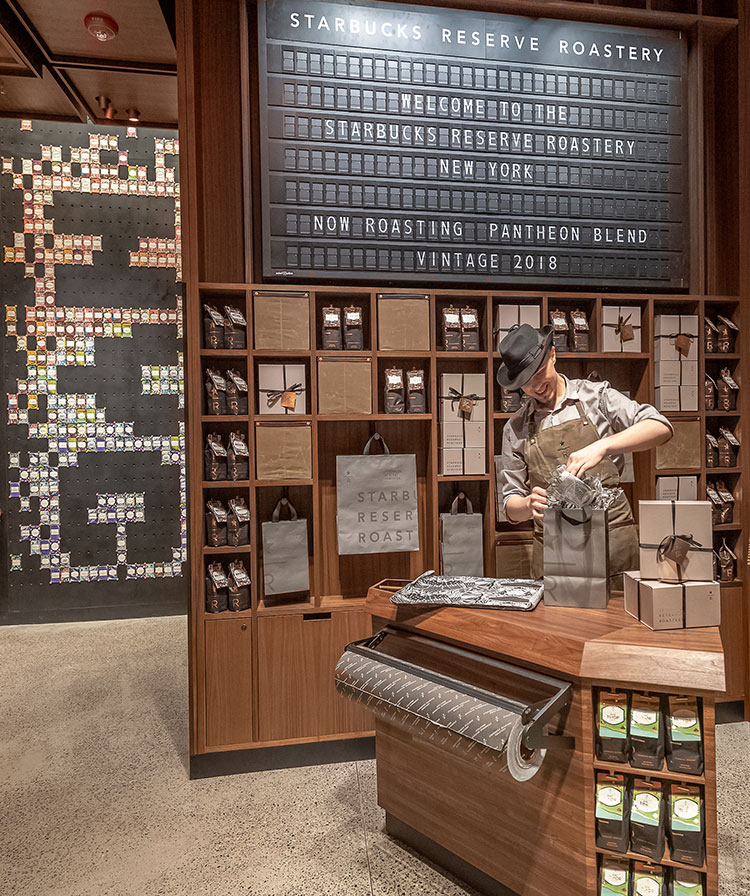