Natural forms, fractal geometry, a modularity inspired by crystals, combinations of traditional craftsmanship and advanced technologies; these are just some of the elements which American practice Aranda/Lasch concocted into a formula which contributed to redesigning contemporary architecture. For the new Valextra store, in Miami, the practice chose to highlight the luxury brand’s Milanese origins, bringing a corner of the Italian city in sunny Florida. 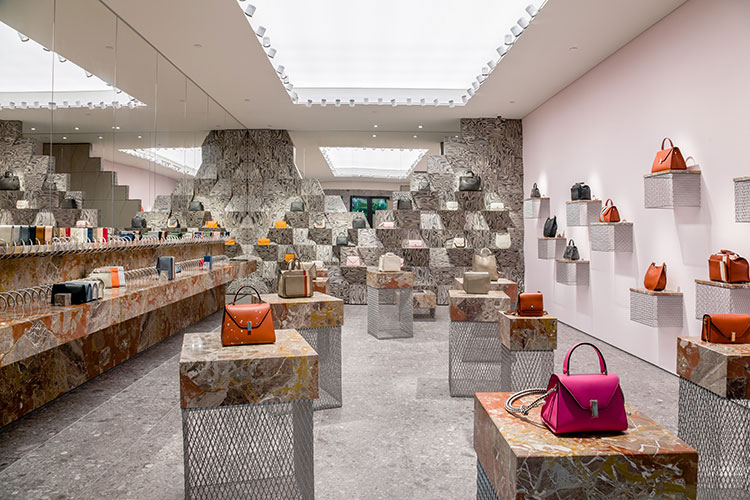 The primary inspiration which Benjamin Aranda and Chris Lasch followed for the project were the unique entrance of Milan’s palazzos: gates, lobbies, hallways, liminal spaces which connect the indoors with the outdoors, the metropolis’ chaos with domestic intimacy. The project is invaded by this suspended tension, by the dichotomy between inside and outside which permeates throughout the environment. It’s an energy both measured and dynamic, which is evident in every detail and which enhance the unique style of the brand’s products. A brand, as the architects describe it, ‘very Milanese: it’s as sophisticated as it is understated, but sensual in its finishings and colors.’

Visitors first encounter the pair’s design approach before they enter the boutique, observing the façade which features the large door inspired by a palazzo entrance, and clad in the city’s signature stone, Ceppo di Gre. Inside, the architects created a design which deconstructs and reconstructs the fundamental elements of a classic Milanese atrium: marbles, metals, decorated walls are presented in a combination of sophistication and intelligence. 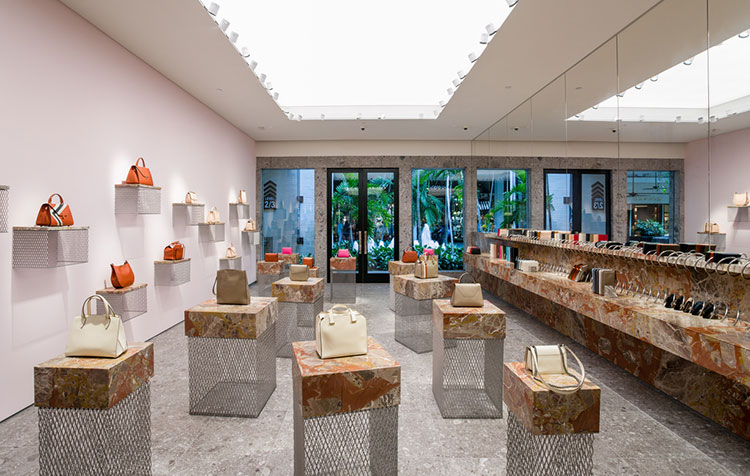 The exclusive Valextra collections are shown on bespoke structures which combine a series of Arzo marble blocks (the same material which can be found in the Via Manzoni, Milan, flagship) with metal details. The latter, created with a common industrial material, features graceful, meticulous detailing. The heavy Italian stones appear to be floating on a mesh net, a structure composed by light iron springs which convey speed and lightness. 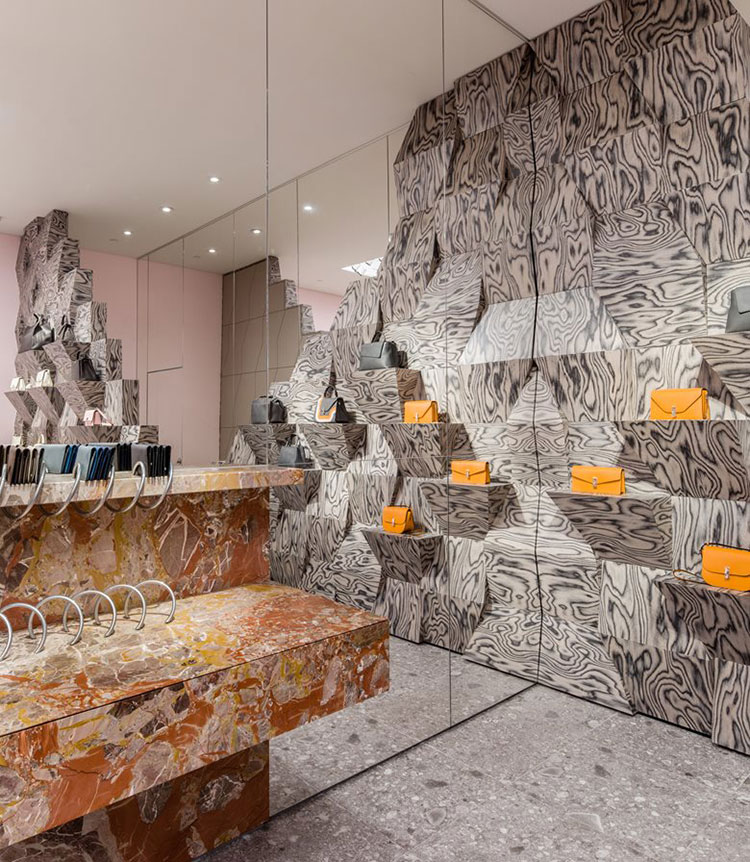 The bags, lying on plinths, evoke a fluid environment, where the stone slabs were floating in the air. In the middle of the space is a wall designed as a double theatrical wing, clad in Alpi Wood by Ettore Sottsass. A composition which is quintessentially Aranda/Lasch: geometric modules whose repetition creates an effect reminiscent of crystals and minerals.

Two marble shelves enrich the structural and chromatic palettes of the space, set across the wall and each featuring a metal spring offering support for the small leather goods. A mix of shapes and materials that combines the formal and structural characteristics of a style typical of the Milan we love the most.

To complete the atmosphere, Barrisol lighting graces the ceiling, alongside a composition of invisible spotlights, a combination which would not be out of place in a museum of an art gallery. What is a Valextra object, after all, if not a portable artwork? In the space, the simplicity of details is combined with the strong impact of shapes and leathers: an environment that is contemporary and flexible, fluid and fresh, which emphasizes the small Valextra masterpieces with unexpected lightness. 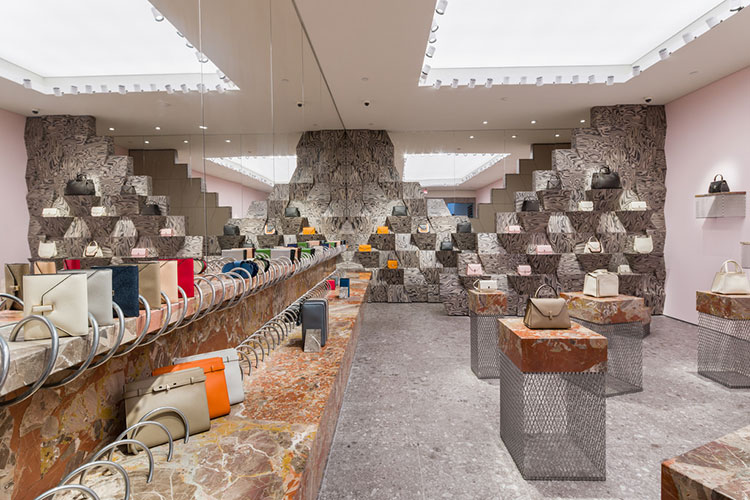 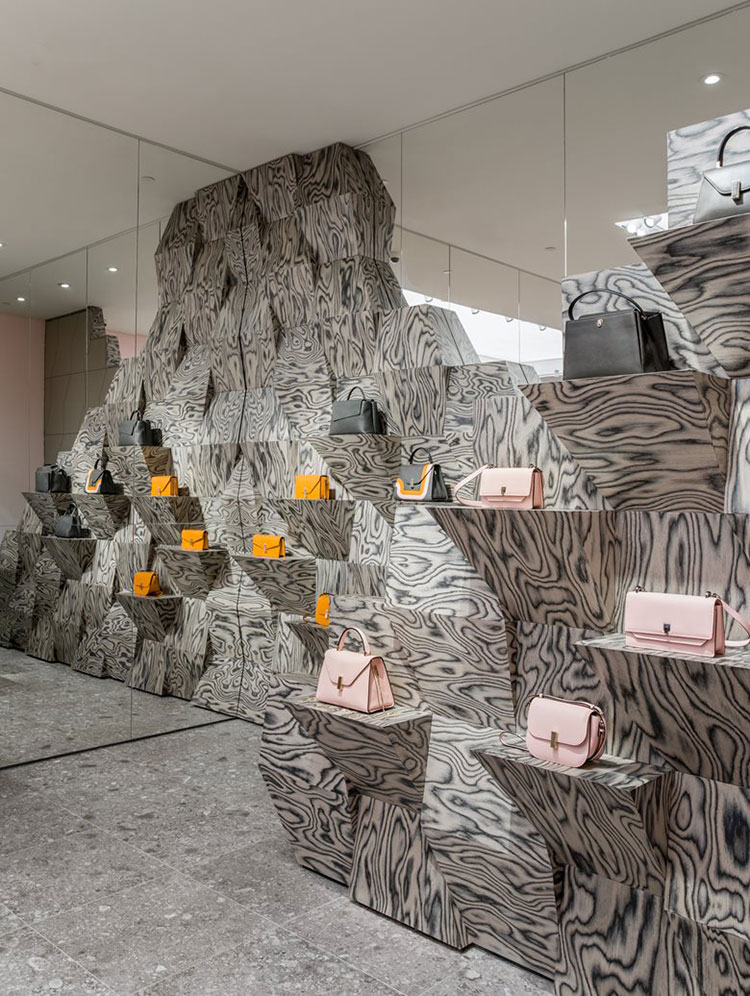 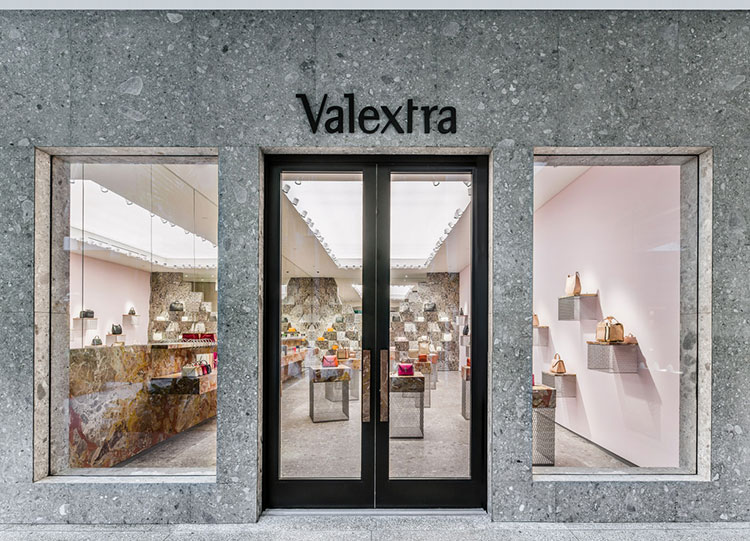