Swedish architecture practice Claesson Koivisto Rune used midnight-blue surfaces, Swedish limestone, oak and copper to create a timeless aesthetic for the interior of the newly-opened Portal Bar in Stockholm. The new venue is the “mischievous younger sibling” to the well-established Portal Restaurant next door — awarded Best Stockholm Restaurant of the Year, 2016 — owned and managed by Klas Lindberg, Swedish Chef of the Year, 2012. 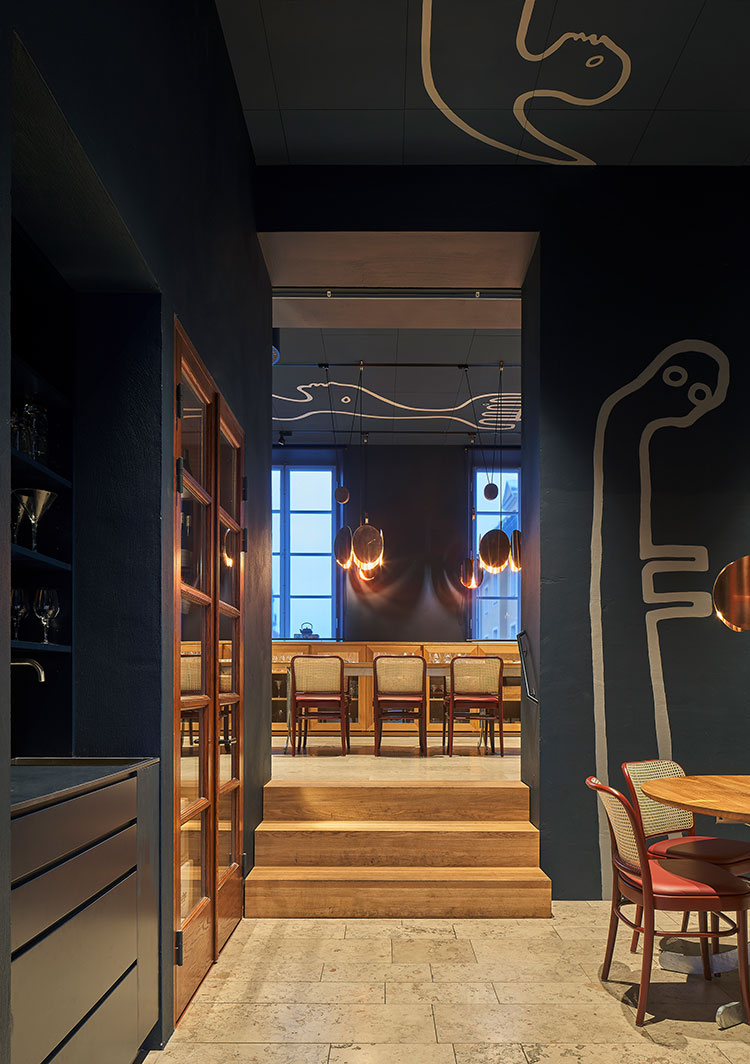 The name stems from the characteristic portal, in the centre of the historic building, which leads pedestrians from the busy S:t Eriksplan, via stairs, to the calm residential Atlas district below and behind. The Portal Restaurant and the Portal Bar now flank either side of this portal. Klas Lindberg asked Stockholm-based architects Claesson Koivisto Rune to design the interior architecture for Portal Bar, realizing an ambiance that had to be in contrast to the blond and bright interior of the next companion.

“Much thought has gone into creating a contained spatial flow and unity in what used to be two different shops with closed back storages,” explains the studio. “First, the windows were cleared so that the space fully takes in the panorama from the public square and park outside. Then the interior was opened up all the way to the back so that parallel sightlines run through the ascending levels of the bar space, via an intermediate smaller dining area and a larger back dining hall that doubles as a chambre separée. In the basement lies a full studio kitchen for cooking classes and events.” 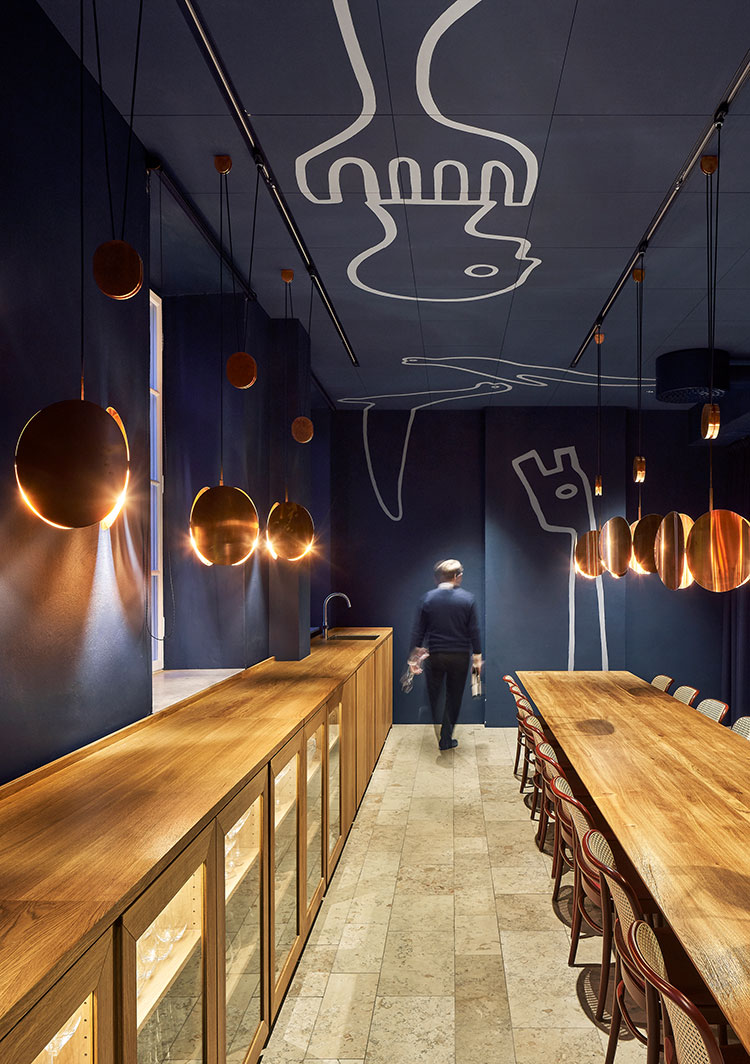 New zinc and oak tables for Swedese, copper lamps for Wästberg and burgundy red wine racks for Design Of was custom designed by the architects for Portal Bar. But Claesson Koivisto Rune wanted to add another artistic dimension, so they called their friend, artist Jesper Waldersten. He agreed to create a graphic artwork, named “Dante’s Ocean”, that was painted on-site and meanders over the entire ceiling and upper parts of the walls.

“I see the work as dream-like, friendly constellations against a canopy that is both the ocean and the night sky at the same time,” Says Jesper Waldersten. 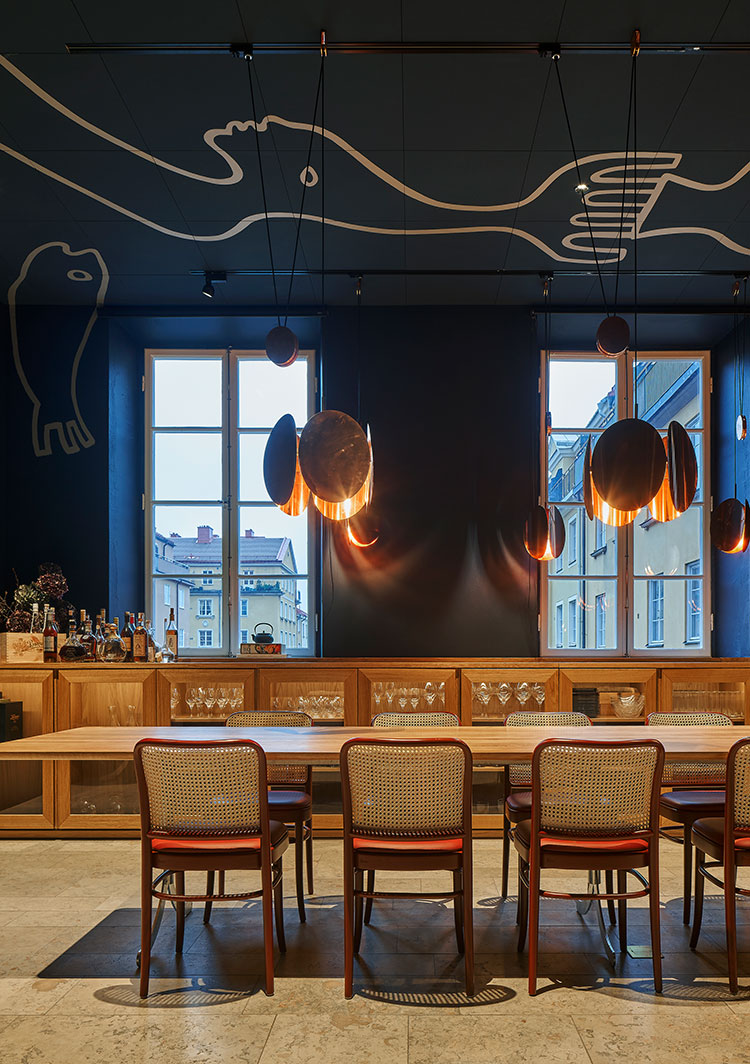 The interior ambiance matches the food and drink concept which is “light fare with a wide array of beverages”. In short, the perfect watering hole for a spontaneous and unpretentious get-together. During the Stockholm Design Week Maurizio Stocchetto – bartender grandmaster and owner of legendary Bar Basso, Milan – was guest starring and serving cocktails. Bar Basso is the famous late-night hangout for all the star designers of the world and their entourage during the Milan Design Week in April every year. 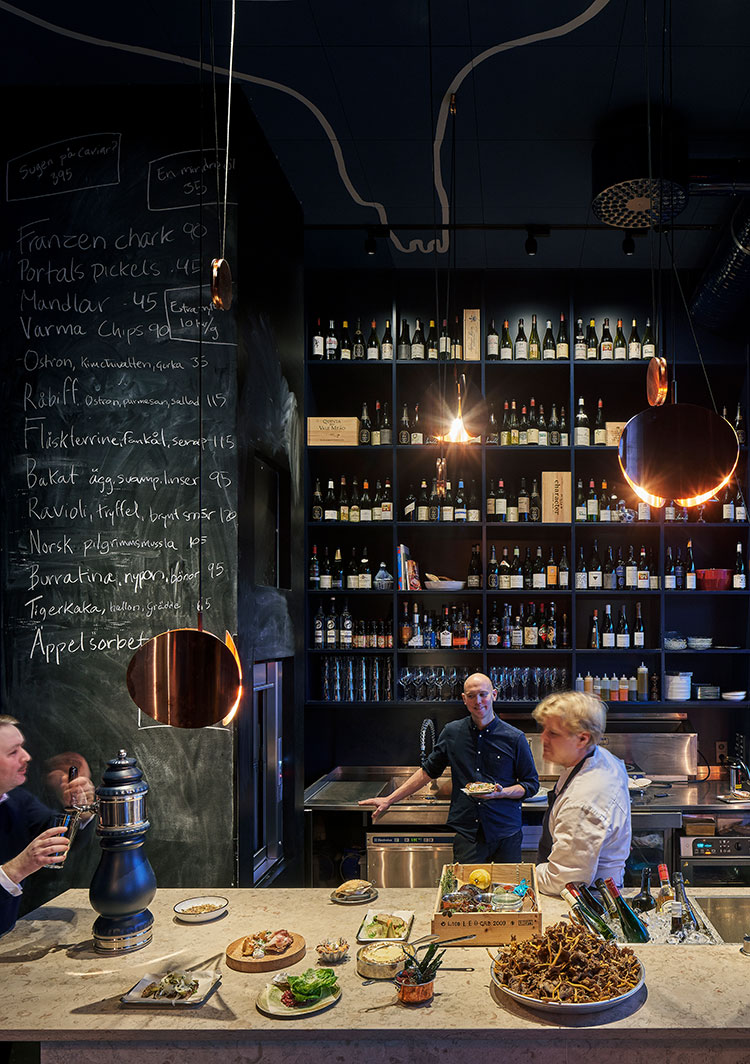 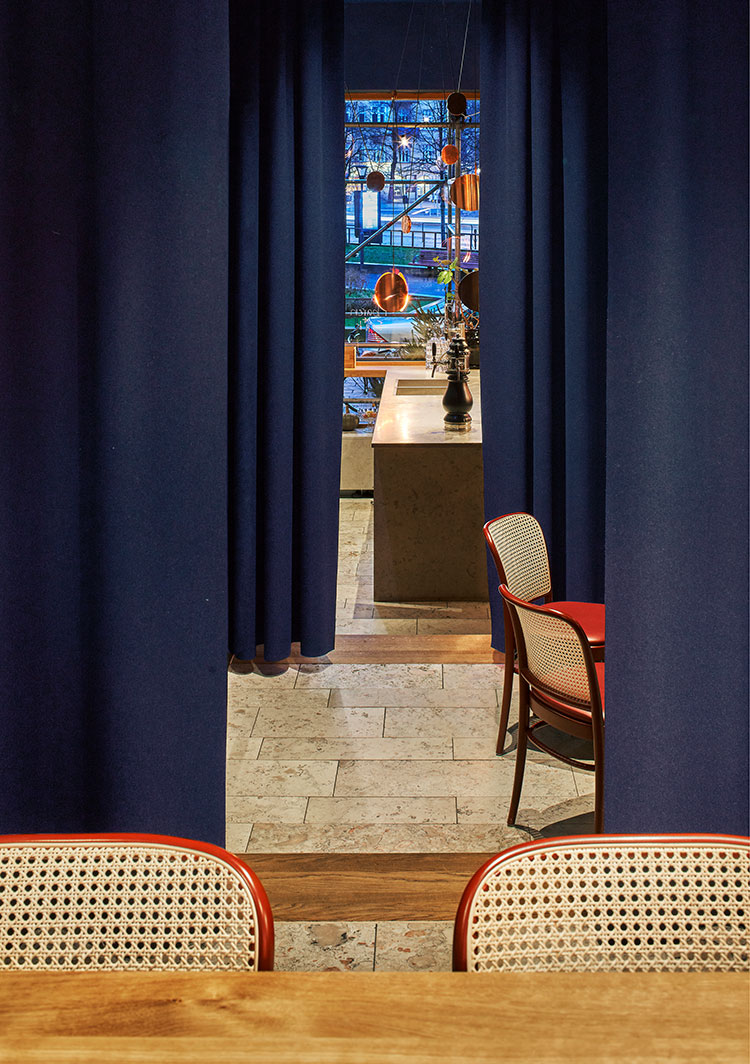 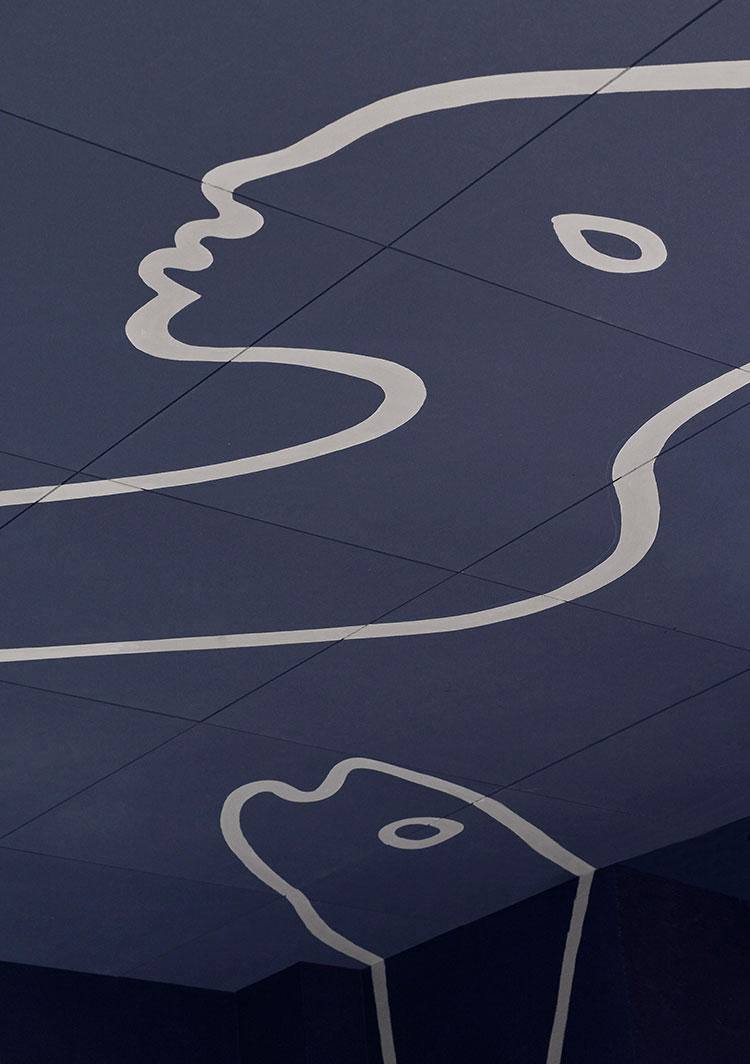 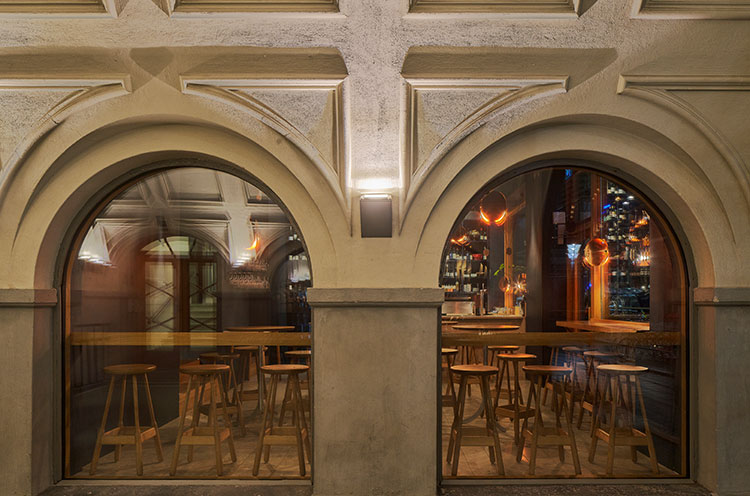 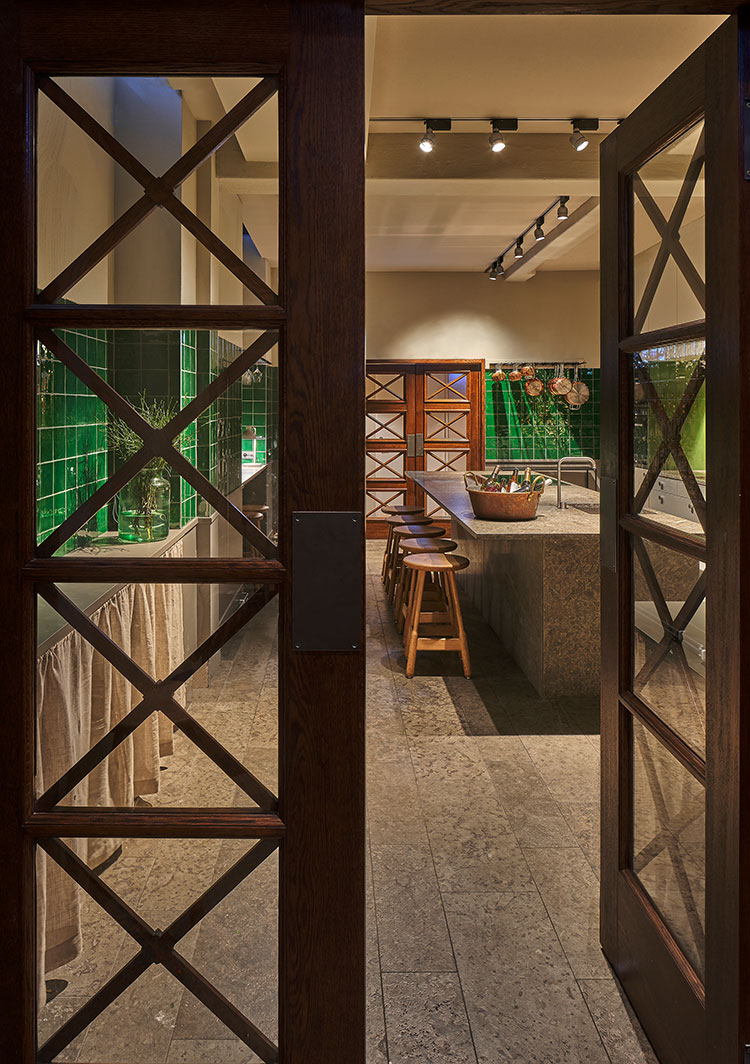