Chinese practice Topos Design Clans has recently designed a seafood restaurant in Yongqiang, Wenzhou, on the coast of East China Sea, with a theme inspired by the ocean beside the city. Shunfenglou Restaurant is a well-known old fashioned local seafood restaurant. On the occasion of the 35th anniversary of its founding, the owners of the restaurant have announced a bold innovation. They entrusted Topos Design Clans to reinvent the restaurant as a place with a fully renewed sensory dining experience. 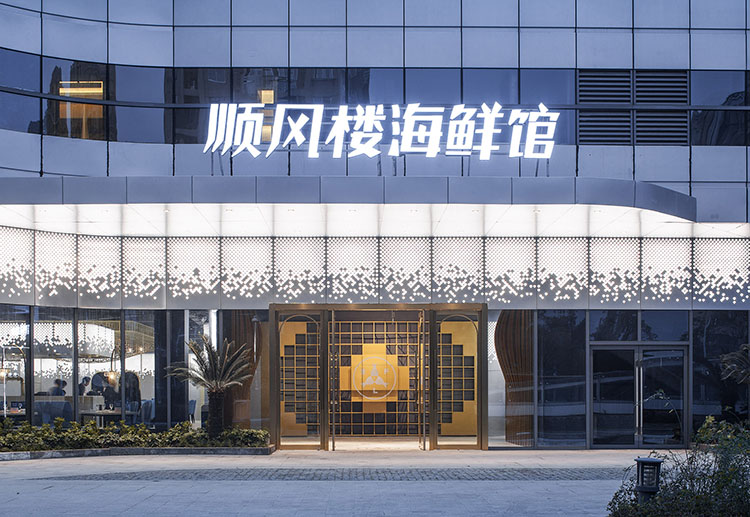 Drawing on the symphony “La Mer” composed by the French musician Claude Debussy, who is the impressionist music master in the early 20th century, the designers created a series of synesthetic experiences about the sea with the deconstructed space, and presented an impressionist symphony of blue sea for the new restaurant.

Yongqiang, formerly known as the Land of Eastern Ou, is located at the mouth of Oujiang River in the east of Wenzhou, Zhejiang province. It is surrounded by mountains on three sides and faces the sea on the east side. Local people in the farming era were known for their diligence and enthusiasm. They relied on the sea to farm, fish and make salt. 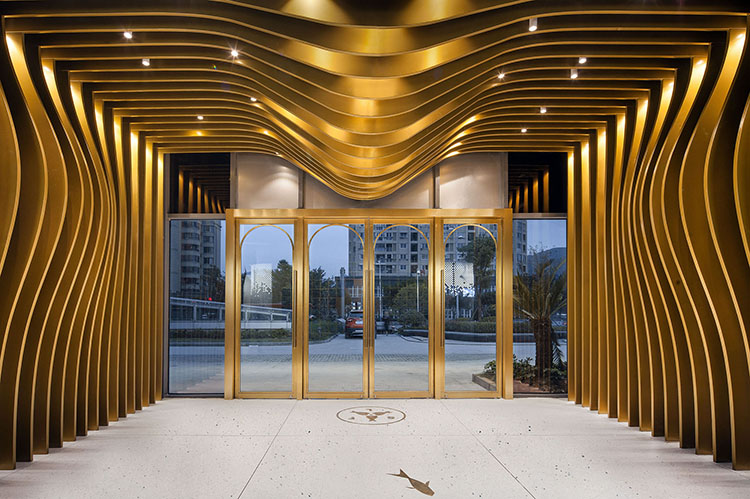 Because of the location, seafood naturally became the major ingredient of all the meals. Shunfenglou Restaurant is famous for offering fresh seafood ingredients and authentic local seafood cooking. After 35 years since the opening of the very first small restaurant, the new head of the restaurant, the second generation of the founding family, wanted to pay tribute to the sea of the homeland through the redesign of this old fashioned restaurant. The design team believes that a good restaurant is the place which can offer both delicious food and enjoyable dining atmosphere. 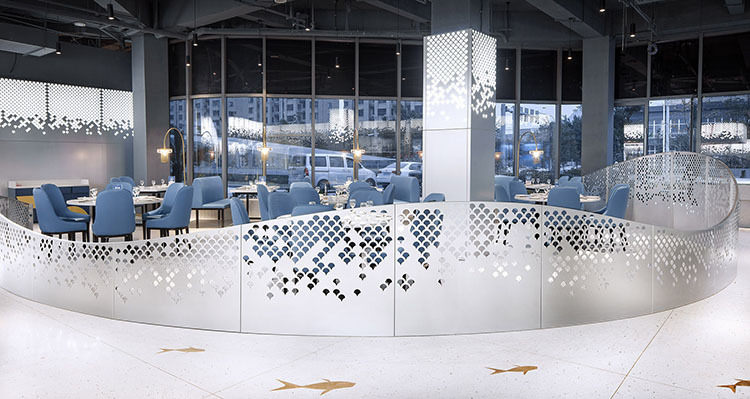 The site of the restaurant is located on the ground floor of a newly built high-rise near Wenzhou Airport, which was originally designed to function as corporate office. The facade of the building is covered by silver aluminum panels with glass-curtain walls, which lacks a basic commercial atmosphere.

Respecting the building operator’s management requirements, the designers followed using silver aluminum panel as the main material for the facade renovation of the restaurant, and decided to use light and small yet unique modifications to enrich the design with delightful surprise in order to blend into the whole building.

Topos Design Clans worked with the visual designer to create a pattern of fish scale as the essential visual element. The parametric design team then developed a code-base principle to arrange the pattern, which would reduce the pattern’s density from top to bottom, to create macro-gradient waving effects. In cooperation with the construction team, Topos Design Clans prefabricated the perforated aluminum panels. Each piece was then arranged by the same combination of sub-patterns, similar but different. After all the pre-made panels were installed, the facade resembles the shimmering sea when backlights illuminate.

There is a set of golden light appears at the main entrance under the hanging canopy. The golden aluminum door illuminates the dull dark ash of the building. Through the glass, there is a cluster of undulating cubes radiating with light, as if it were the sun rising slowly from the sea. 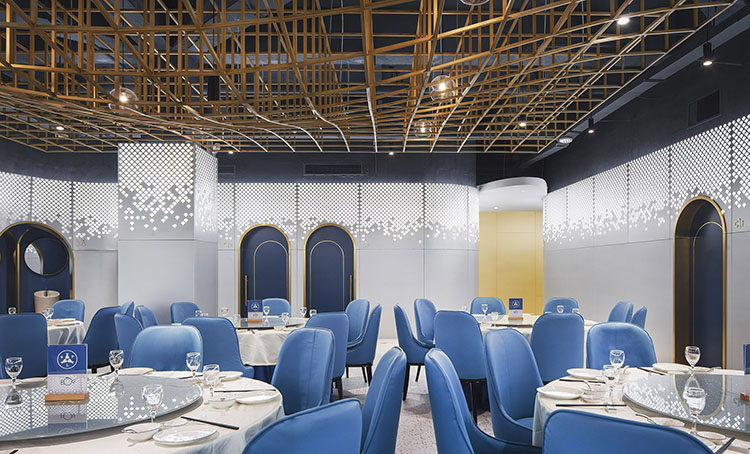 In Gu Cheng’s poem “Arc”, the designers read the fullness of dynamic beauty and speed; just like in Debussy’s symphony “La Mer”, they heard all the emotions, breathings and colors of the sea. To create fluid interior space, the design team carefully implanted rounded corners and smooth forms in different dimensions and positions into the design. It not only resulted a sophisticated game of space and form, but also an architectural translation of perceptions and senses.

The prototype of the space is a flowing labyrinth with perceptible paths. Firstly, it starts with the boundary of the waves: two continuous perforated aluminum partitions extend the texture of the facade, with the hidden rooms behind enclosing the central hall.

Secondly, it goes on with a melodious semicircle screen made by perforated aluminum panels, separating the seating area and the ordering area. Finally, a central lounge bar opening to the surroundings is like a luminous lighthouse standing in the middle of the ocean, together with several shoals of copper fish on the terrazzo floor, navigating the circulation. As a result, the designers transformed the1,500 square-meter irregular space into a dynamic fluid container.

A group of organic form-finding installations using natural imagery were organized as a series of metaphorical montage: the undulating waving ribs encircling the lobby, the quintessence of the pixel light on the front wall, together with the curved mesh grid ceiling hanging in the dining hall. All of them were intimately combined together, like the wind blowing through the sea, like the keel structure of the dragon-boat, and like the delicious belly of marine fish. Finally, these elements defined the entire space. The parallel arrangement of five large arches in the VIP dining rooms created a spatial experience similar to the cabin on a boat. The lavatory is hidden behind five parallel arches, the two on both sides are the men’s and women’s bathrooms and three in the middle are washstands with round mirrors. 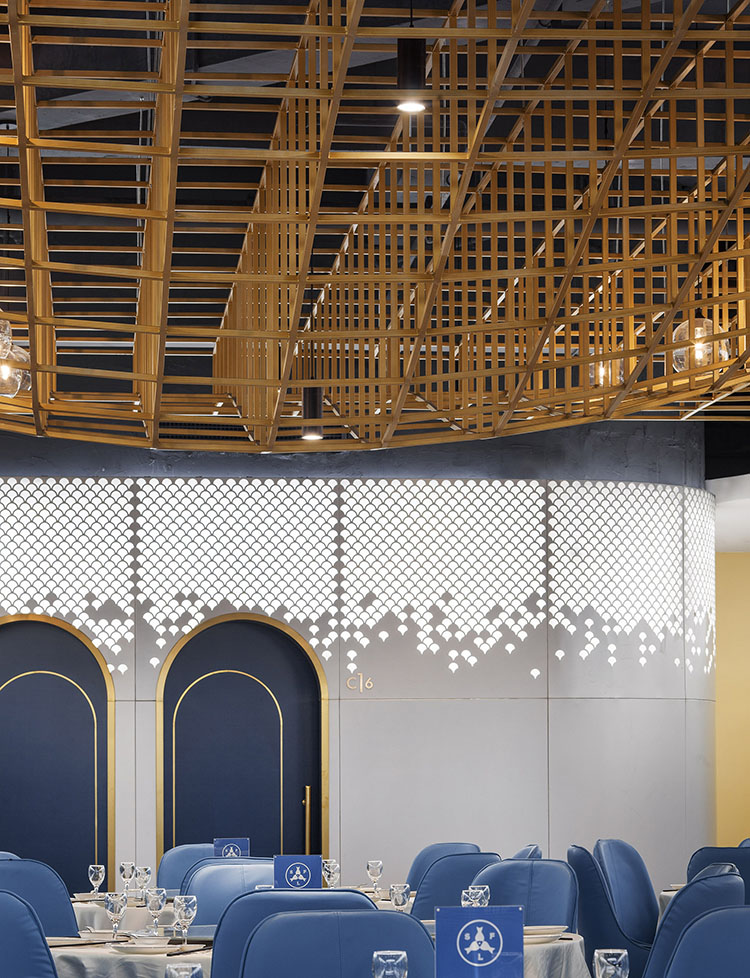 The space is more blue rather than gold and silver. A wide variety of blue colors emerge on different materials that are used for different purposes. The baking-finish arch doors in deep-sea blue, the painting walls painted in navy blue, and the leather chairs in deep sky blue, together render the space like the tender and vast blue ocean.

Topos Design Clans believes in the philosophy of realistic utopia, and strives to create good things and beauty in the real world. In this particular design, the designers paid tribute to the sea, which was not only the tracing of the glorious of tradition and history of the restaurant, but also a brave attempt to combine the organic nature forms with the spirit of contemporary design. Since the opening, the new restaurant has given the thought to the local people to visit the sea once again, as if the symphony “La Mer” that once made a gentleman in Paris at the beginning of the twentieth century to exclaim: “Oh! This is the sea! ” Yes, the sea, it is!