Originally conceived by seminal architect Sigurd Lewerentz and now reanimated at the hands of Gert Wingårdh, the opening of Blique by Nobis marks the rebirth of a modernist landmark in one of Stockholm’s emerging neighborhoods. Set between the gallery district of Vasastaden and the up-and-coming area of Hagastaden, Blique by Nobis stands not only as a launch point to the Swedish capital’s arts scene, but also as a natural nucleus for local and traveling creatives. Blique by Nobis is housed within a 1930s warehouse designed for Philips by acclaimed architect Sigurd Lewerentz, creator of Functionalist masterworks such as the Malmö Opera House. For the transformation of the landmark building, the Nobis Group looked to another modern design master, Gert Wingårdh, to create a 249-room contemporary urban hotel in his inimitable “high organic” style. 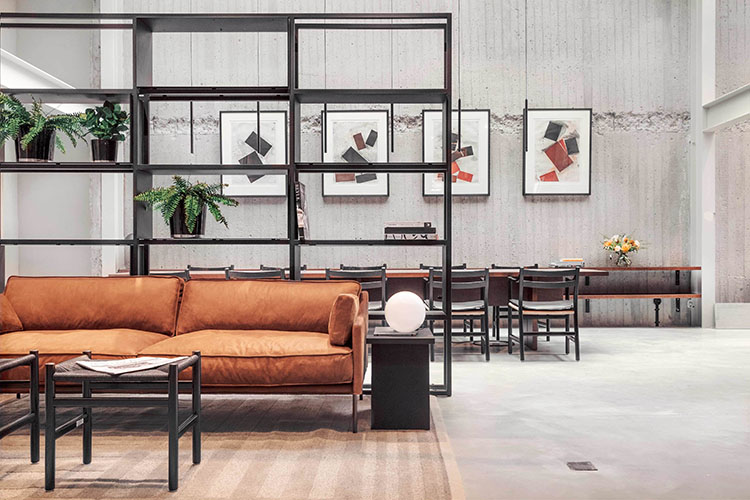 Wingårdh has ensured that the architectural integrity of the original structure remains intact, with a design concept defined by the use of concrete, steel, and exposed metal pipework. Timeless natural materials such as leather and oak, as well as tactile textures like velvet and wool, have been layered onto this industrial base to create interiors that are unapologetically urban, yet warm and welcoming. 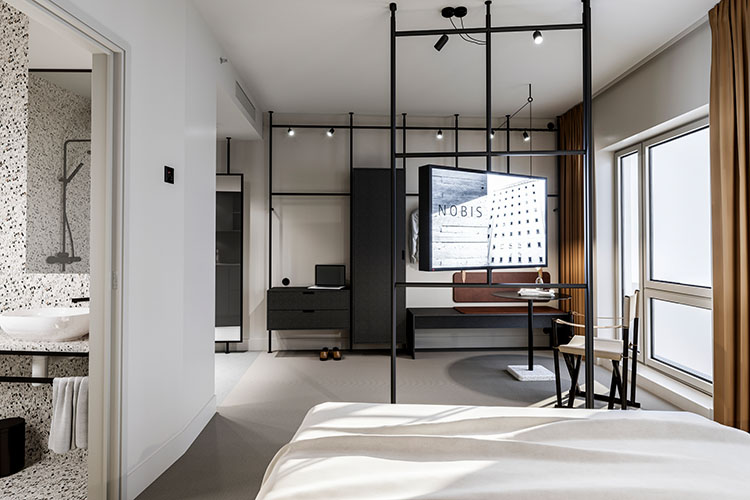 Paying homage to owner and Original Alessandro Catenacci’s Roman heritage, Italian design pieces have been woven into the aesthetic, including the couches and armchairs by De Padova that are found throughout the public areas. However, it is Nordic design that stands centerstage—from Fogia Tiki sofas in the lobby to the classic CH47 chairs found in Boketto restaurant, designed by Danish visionary Hans J. Wegner for Carl Hansen & Søn. 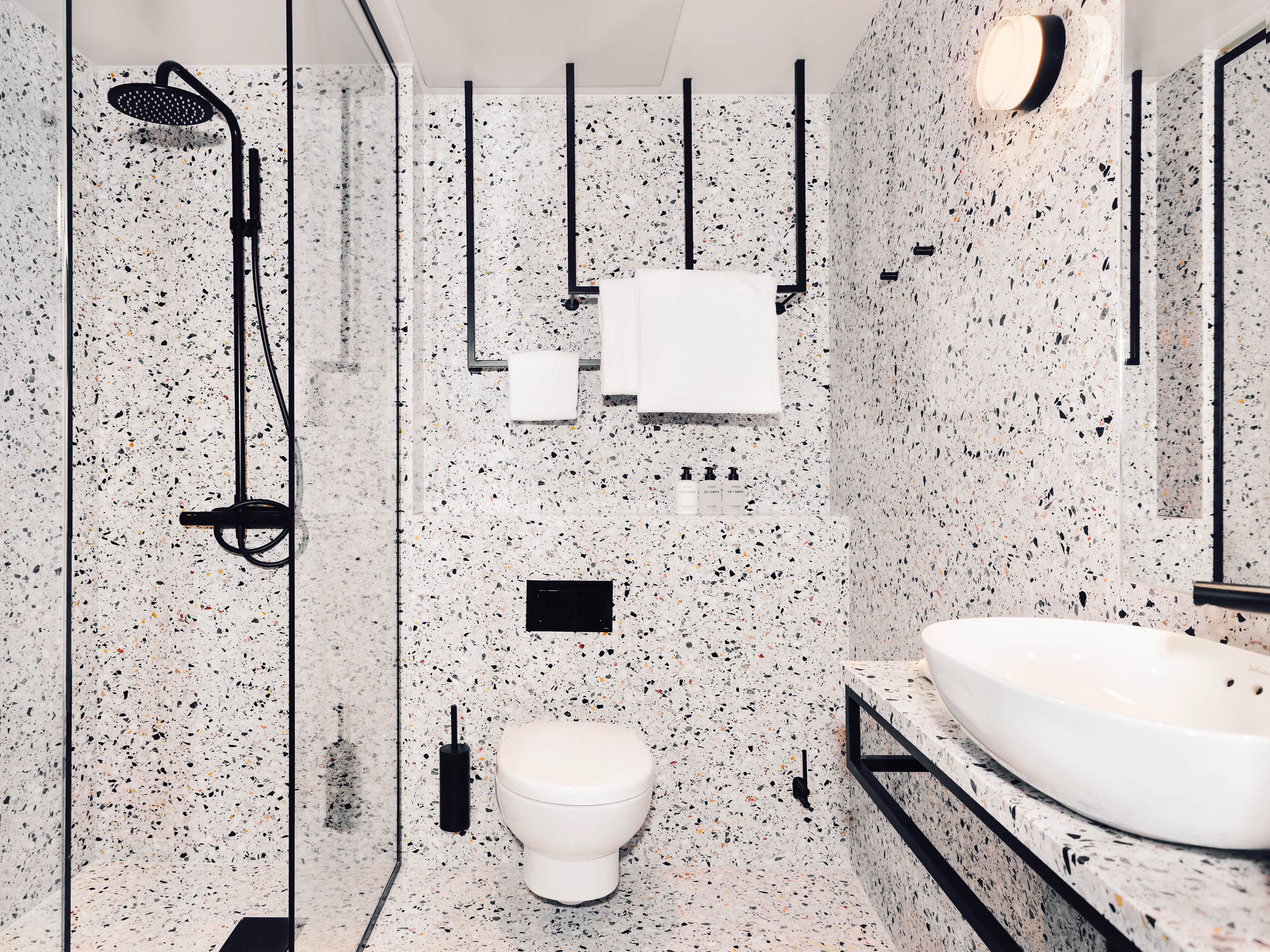 A perfect marriage of form and function, the 249 guestrooms have been meticulously planned by Wingårdh to combine space efficient solutions with the beauty of artisanal craftsmanship. Ranging from 10 to 66 square meters, all rooms and studios feature supremely comfortable beds from Bed Factory and custom-designed, open storage units rendered from steel tubing. Ideally appointed for extended stays, the 58 Studio suites play host to fully-fitted kitchenettes, and the top-floor Studio Executive suite boasts a dining area overlooking the city. A soothing palette of greys complement the rooms’ industrial elements, while wool carpets and the use of leather, textiles, and wood create a cozy atmosphere. The stylish color scheme extends to the luxurious bathrooms, which are outfitted in white Terrazzo flecked with amber, and feature amenities by Swedish-based parfumerie Byredo. 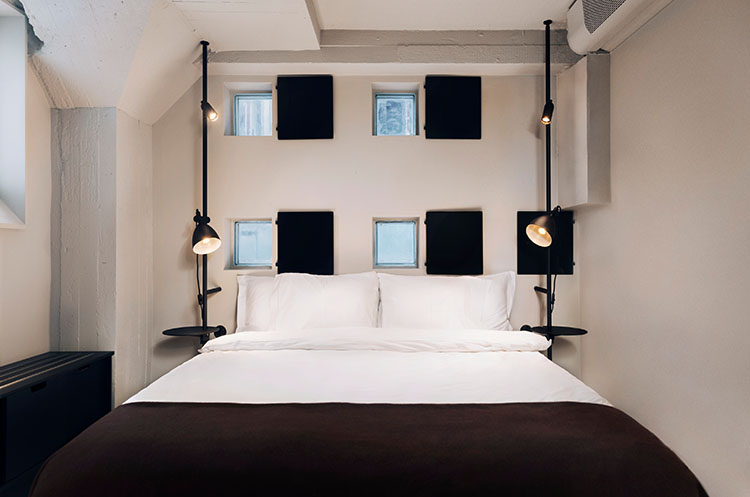 Far from being defined solely by aesthetics, however, Blique by Nobis embodies a contemporary collective where innovative architecture and design coexists with the art of social interaction. The importance of community to the overall concept is made apparent from the very first impression—the hotel is accessed via a large public courtyard that invites visitors to linger, fueled during endless Swedish summer days by a resident food truck. The airy, inclusive lobby emerges as a beacon for the nomadic art scene, playing host to a progressive program of music and visual arts, and a transient exhibition wall. An ever-changing roster of emerging and established DJs soundtrack evenings at the lobby’s Origo Bar, creating a buzzy, inspiring atmosphere further encouraged by the open stairwell leading down to Boketto. 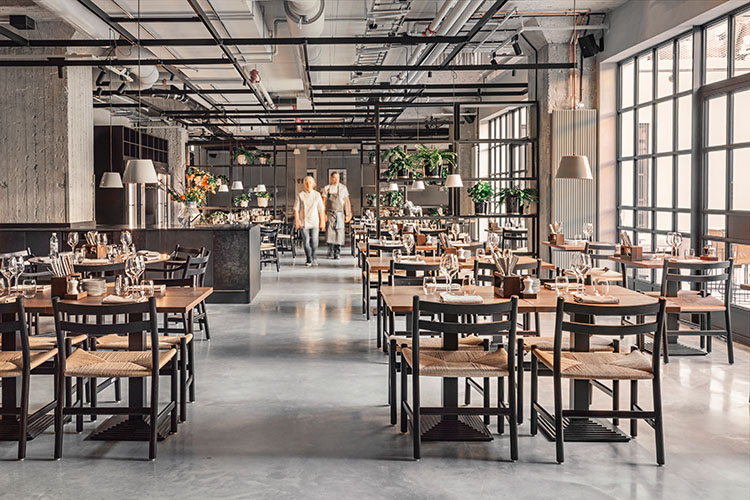 The Nobis Group is renowned for its portfolio of exquisite restaurants, defined by ingredient-driven menus and creative concepts, and Blique by Nobis is no exception. Featuring an innovative Euro-Asian menu, Boketto is the hotel’s subterranean restaurant and bar—accessible via the lobby and the central courtyard—where guests seeking a quick meal can also order Napoletanean-style pizzas. From the ground up, Blique’s top floor is home to Arc, a fusion restaurant specializing in Scandinavian seafood and Korean cuisine, while the bar boasts a premium selection of sake. Stretching over the terrace and utilizing the freshest, organic herbs and vegetables from the hotel’s rooftop kitchen garden, Arc is the epitome of high-style living overlooking the capital’s spectacular cityscape.

Rounding out the hotel’s facilities, the events space features eleven meeting and conference rooms and the courtyard food truck is available to hire for private parties. A 20-seat private cinema is available for screenings and launches and will also host regular movie nights. Off-duty revitalization comes courtesy of the stylish sauna and fully-equipped fitness area.