Michael Tozzi, former chef at Olive et Gourmando and Le Club Chasse et Pêche, didn’t hesitate to call on interior design firm BlazysGérard when it came time to open his own restaurant, Dandy. The project brief was clear: Tozzi wanted a welcoming, unpretentious space with a touch of class. A place that would feel like a world unto itself. Known for designing spaces with a distinctive character including:  Les Cavistes, Bistro Brasserie Les Sœurs Grises and the Casino de Montréal, Alexandre Blazys and Benoit Gérard were eager to take on the challenge. 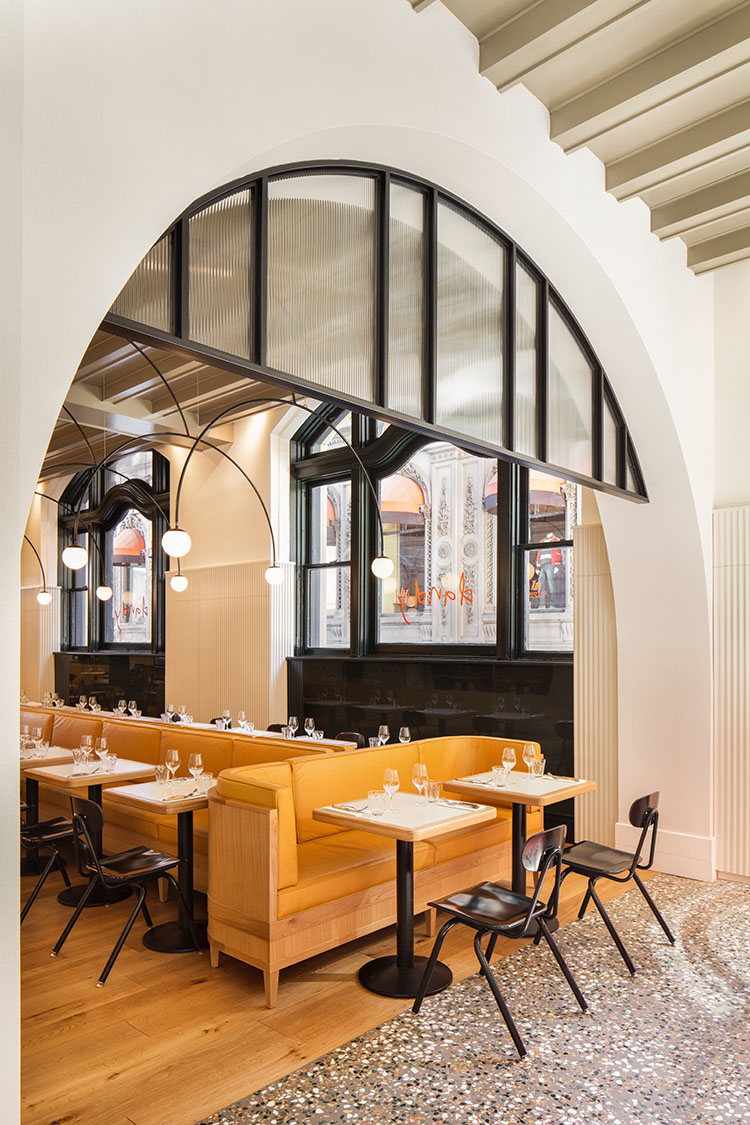 Located on Saint-Jacques St. in Old Montreal, Dandy is open only in the daytime: breakfast and lunch on weekdays and brunch on weekends. From the outset, the restaurant’s hours had an impact on the work of Blazys and Gérard. The designers opted to create an understated but brightly lit space, with a focus on people – “because we always look better in a simple space than in a cluttered one,” Blazys explains. “In our profession, we sometimes want to do too much, put too many ingredients in the mix. With Dandy, the challenge was to make the most of a few carefully planned interventions.” 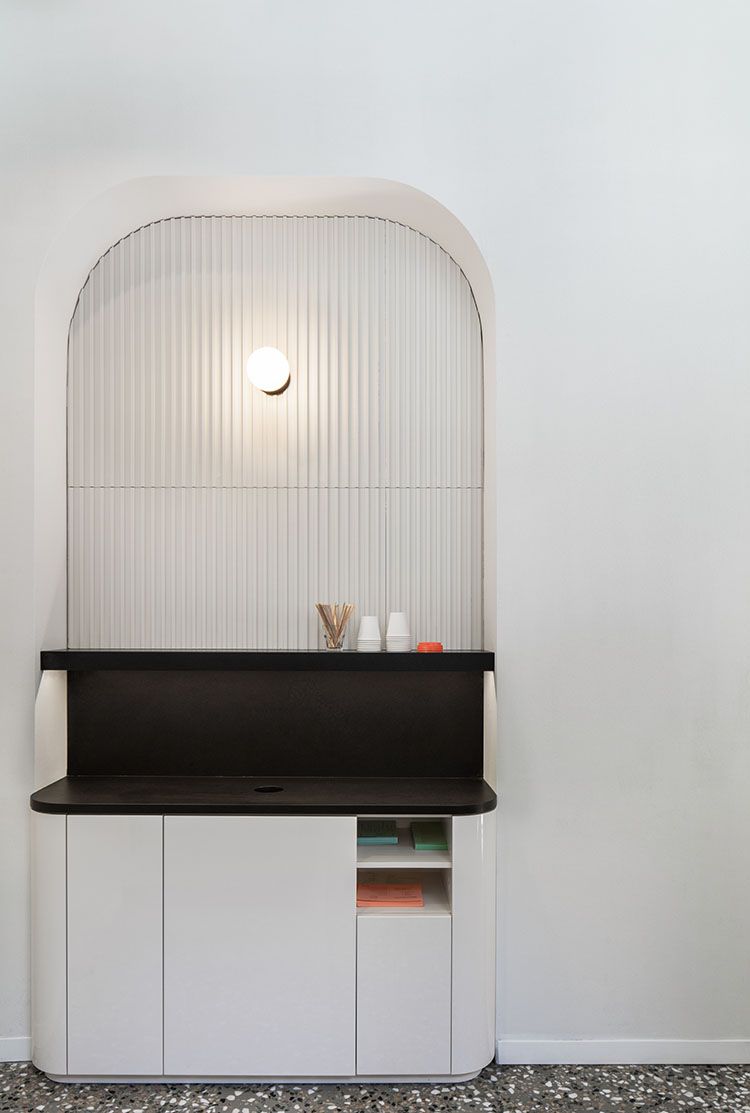 The space, originally an insurance company boasts huge windows. And yet it was very dark when the designers first visited. Inspired by the windows – the only vestiges of the insurance company – they asked themselves what the entrance area would have looked like if the original tenant were still there. As a result, they designed the service counter as if it were that of a bank, positioning it prominently to complement the long dining room and its two rows of banquettes, as well as the kitchen, at the back of the room. Inspired by the curved windows, they soon hit on the idea of building two large arches to set off the dining room. “We like it when the architectural language of the exterior finds its way inside,” says Gérard. 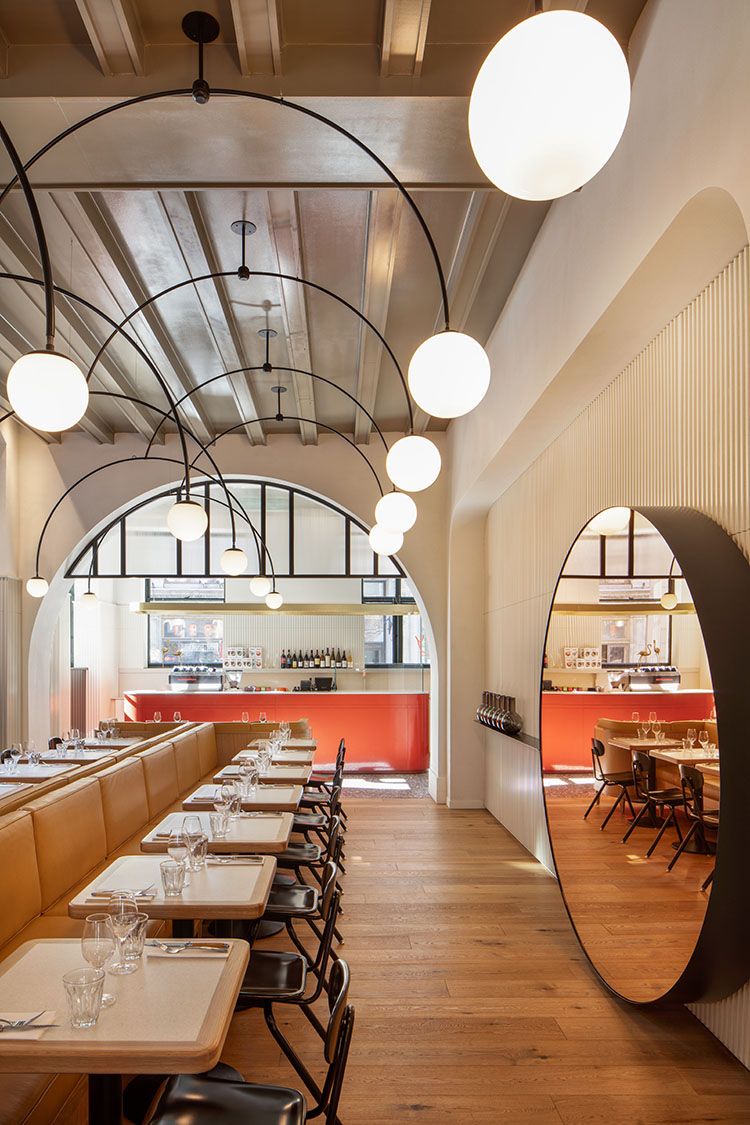 Above all, the partners worked with light the way they work with wood. “To us, light is another raw material. We play with it and sculpt it, just like any other material.” Blazys and Gérard opted for yellowish accents, taking advantage of the color’s capacity to reflect and absorb light. The result: natural light – a constant presence at Dandy – illuminates faces and enhances the casual ambiance. The designers installed a beamed ceiling for better acoustics and finished it in reflective paint. “Outside light is reflected off the ceiling and bounces back into the room, boomerang-style,” Gérard explains. 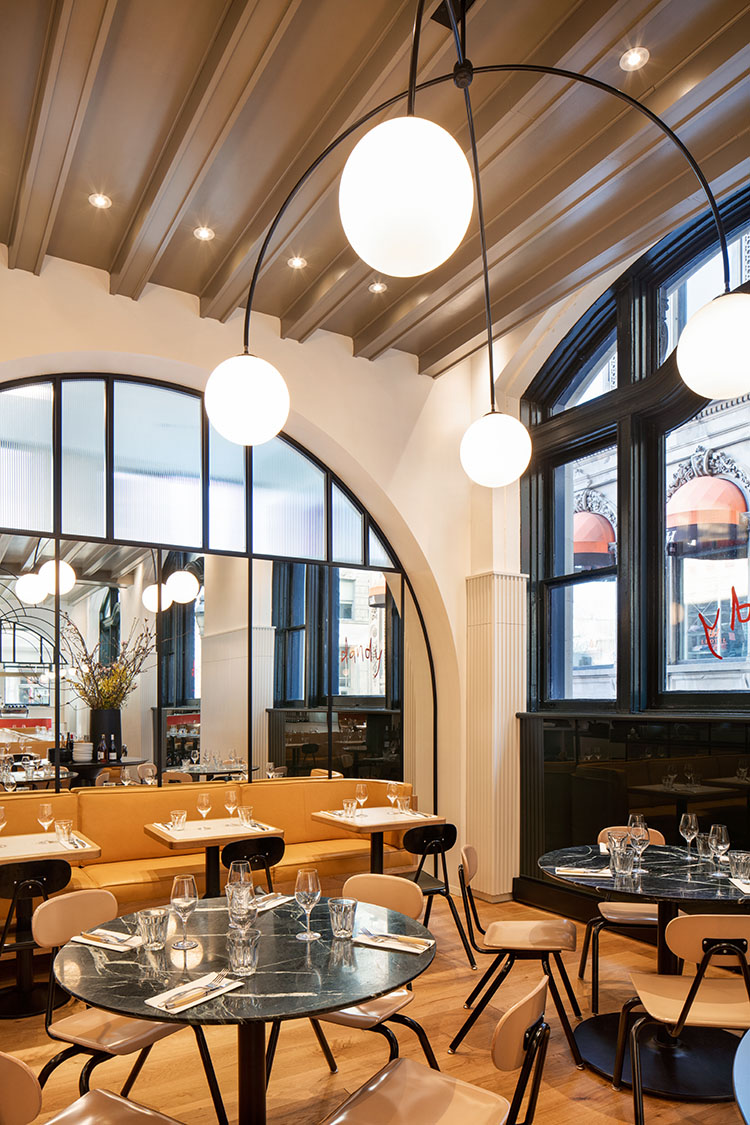 To create movement and pique the curiosity of passers-by, the partners designed a giant lighting fixture with multiple stems, floating like a mobile above the dining room. The fixture gives each table its own lighting and punctuates the space to give a sense of intimacy within the vast dining room. So that each guest feels sheltered from the bustling street outside, the lower portion of the windows is covered with opaque paint. “When you’re inside, you feel completely cut off from the city. Outside, the window starts 1.8 meters above the sidewalk. Passers-by can see the mobile, but little else,” the designer explains.

Lastly, continuing their work with light and reflections, the designers installed a large round mirror facing the windows – a nod to the safe once located on the premises. “As well as giving diners a glimpse of the city outside, the mirror is used daily by customers for taking selfies. It’s a perfect space for ‘instagramming’.” 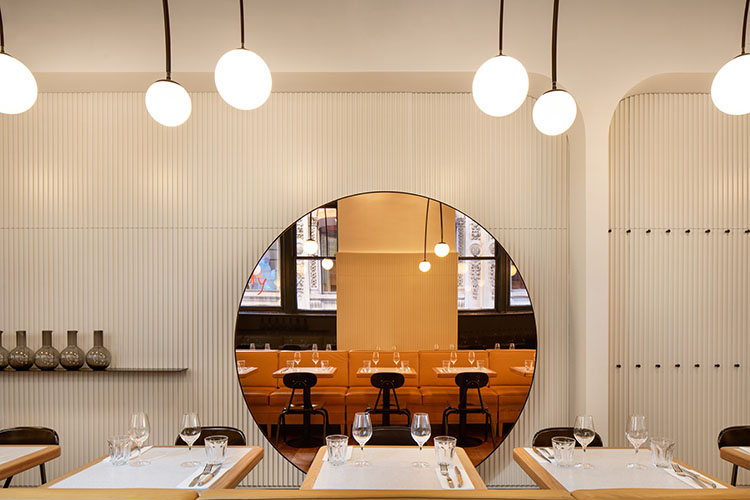 Like the chef’s kitchen, the entire restaurant needed to be about energy, freshness and simplicity. The partners, therefore, chose a single color – an orange-yellow – to give the space a sunny vibe. The floor is finished in classic white oak, while the entrance hall echoes the banquettes with terrazzo poured in situ. Activity zones, like the service counter near the entrance or the bar near the kitchen, are set apart through the use of red. “In the morning, customers can pick up pastries, made in-house, from the front counter. If dining in, the other counter, the one directly connected to the kitchen, puts them close to the chef, who they can watch plating meals.” 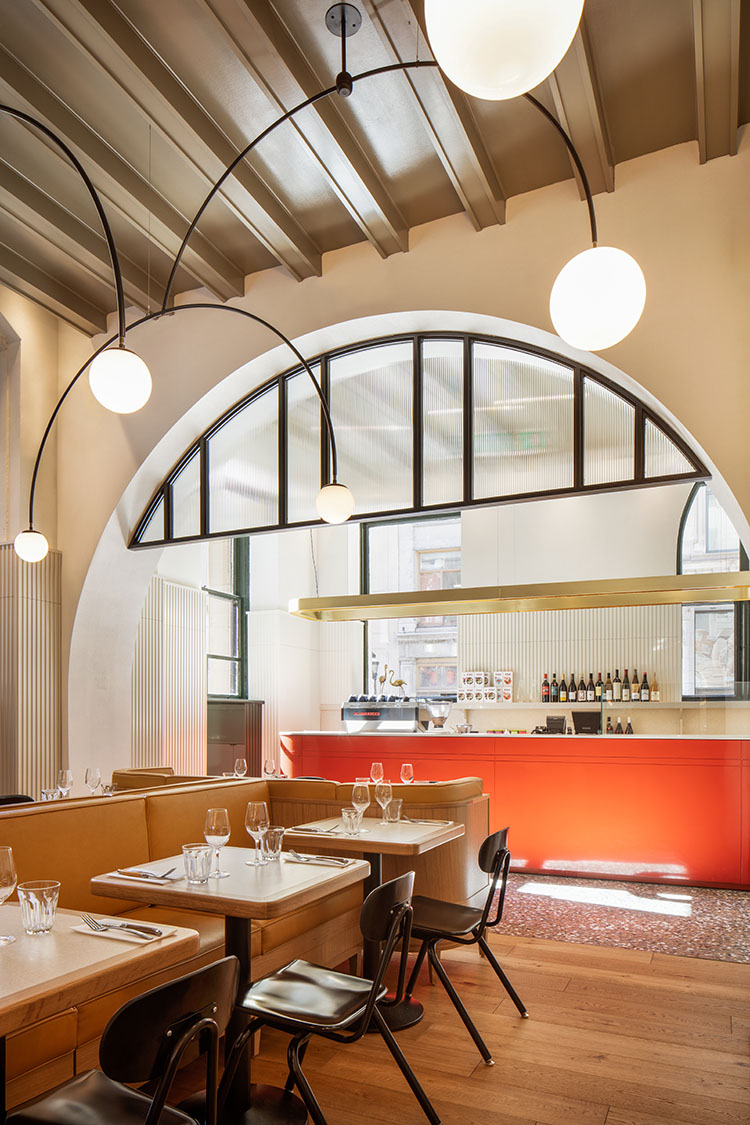 Simple, refined cuisine and a chic, welcoming ambiance: Dandy is reminiscent of certain New York daytime restaurants, like La Mercerie. On weekdays, the clientele skews toward young professionals of every stripe, as well as lawyers and workers from the nearby banks. On weekends, young families come out for brunch, attracted by the refined, warm space, as do the neighbourhood’s trend-setting residents. Alexandre Blazys and Benoit Gérard have accomplished their mission of giving the space a strong personality with broad appeal, while keeping everything light and unpretentious.