A fashion icon since the Fifties, Pierre Cardin is known for his revolutionary designs and experimental outlook. Inspired by geometric shapes and motifs, his work embraces imagination and innovation, blending circular movement and structured lines. Obsessed with shape and form, one of Cardin’s most well-known designs was his sci-fi style ‘bubble dress’ (1954) – which combined earthly elegance with out-of-this-world colorways. 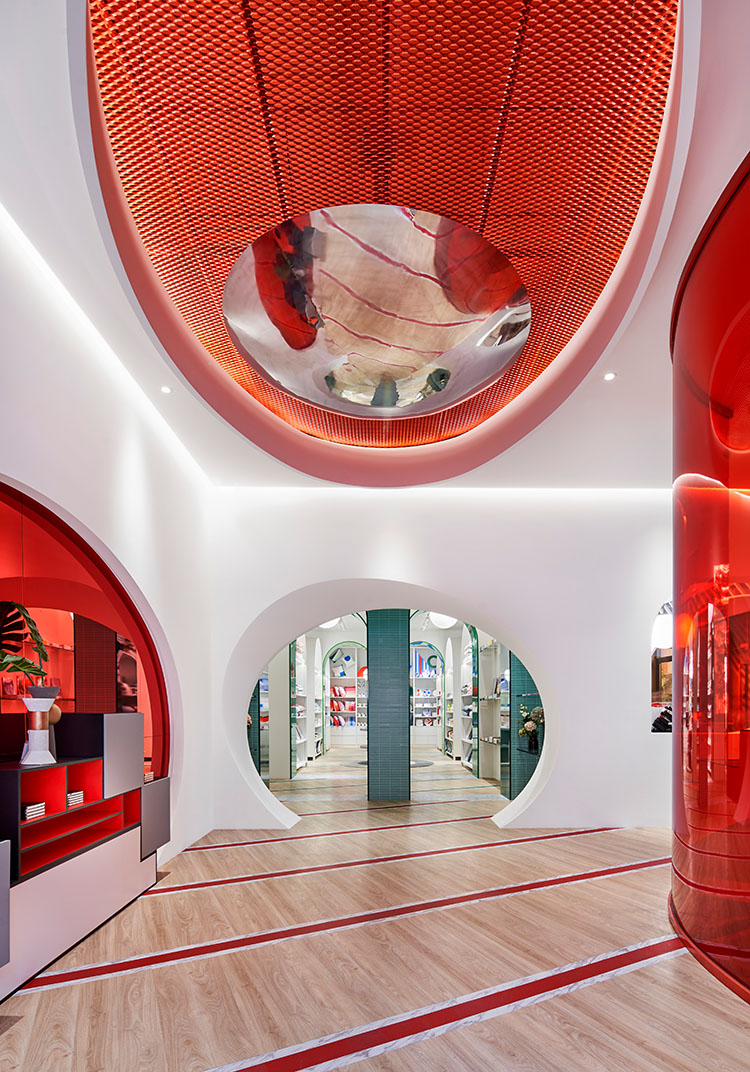 The bubble theme continued when, in 1989, Cardin became the second owner of the iconic Palais Bulles (the Bubble House), perched on a rocky cliff above the Mediterranean Sea in the South of France. When the original owner passed away, Cardin swooped in and completed work on the monumental house which was designed by Hungarian architect Antti Lovag to mimic early cave dwellings. Cardin translated his passion for geometric shapes, symmetrical cuts and curves into the interiors, and the Bubble House – with its series of pod-like domed structures – was to become a place that inspired him constantly. 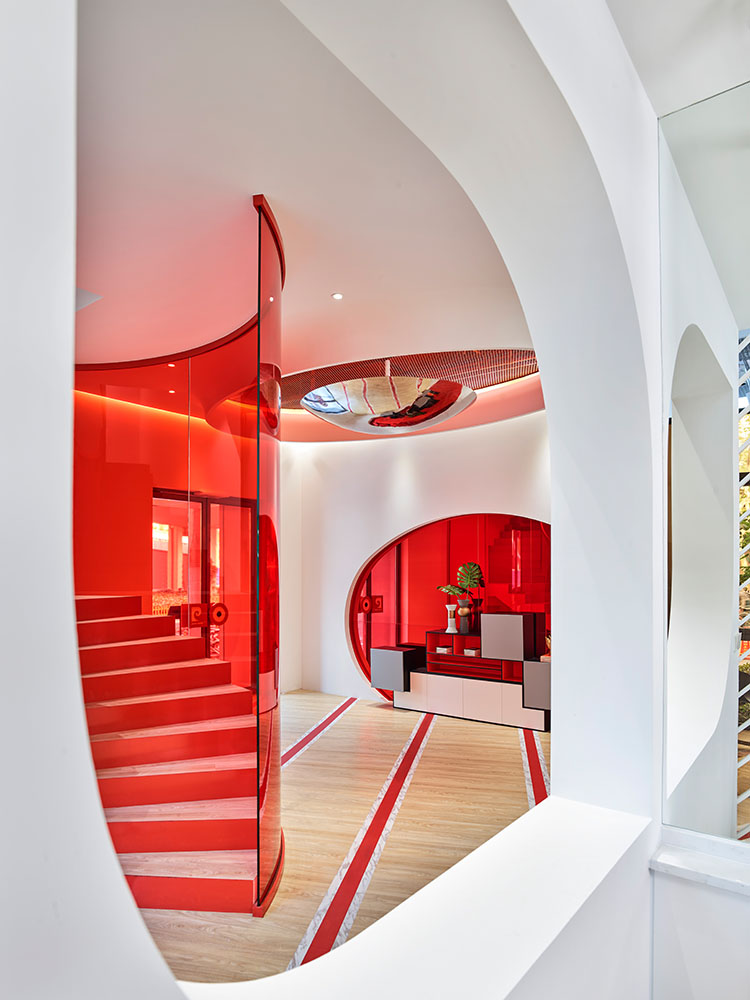 Studio MVW took inspiration from the Bubble House and from Cardin’s passion for sci-fi when developing the Shanghai Home Showroom. The result is a dynamic 500-square-meter interior which offers visitors a dynamic retail experience and an insight into Pierre Cardin’s creative world. Bold colors and rounded forms define the retail journey which begins with a curved red Bubble House-style entranceway, leading to a dramatic white-walled interior defined by bold accents of green and red. Globe lighting throughout – both ceiling-hung and incorporated into custom-designed merchandise stands – echoes Pierre Cardin’s fascination with bubbles. 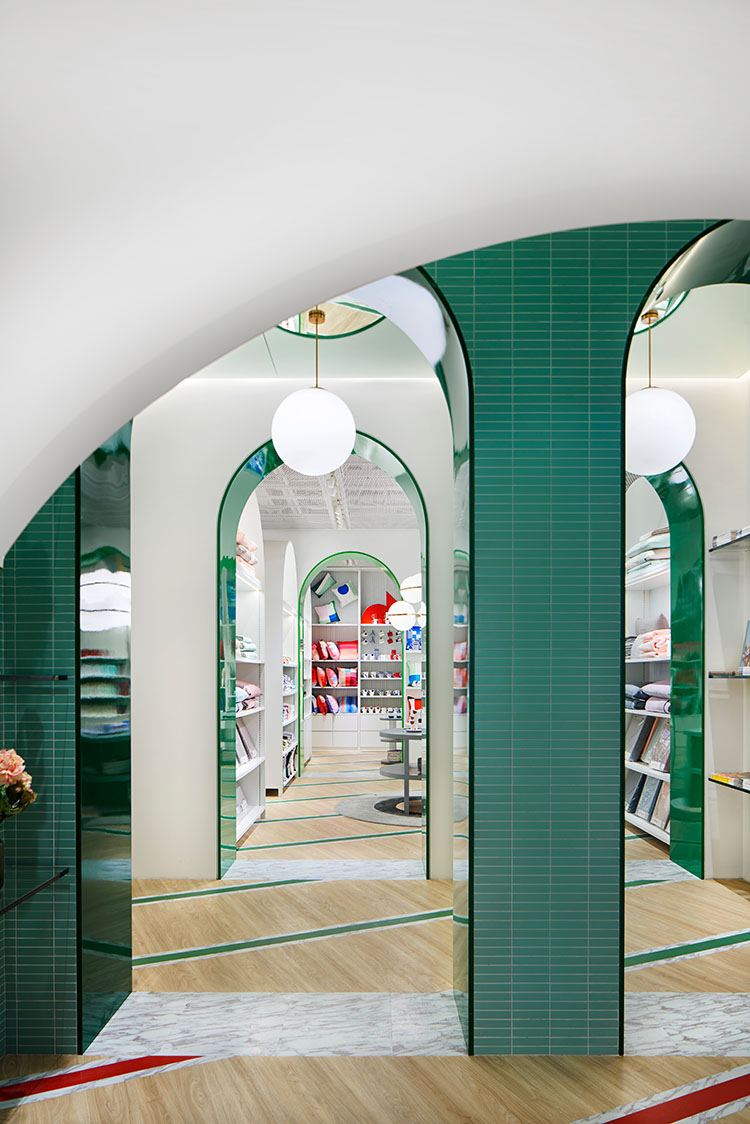 In an elegant nod to the iconic archways of Parisian shopping arcades, the showroom’s central corridor is composed of a series of white archways inset with reflective green lacquer panels. The shade of green used by Studio MVW was inspired by Pierre Cardin’s first showroom interior, which still exists today in Paris’ Faubourg Saint Honore. The succession of arches inset with mirrors serves to create different perspectives depending on where you look. This further engages guests to discover the space. 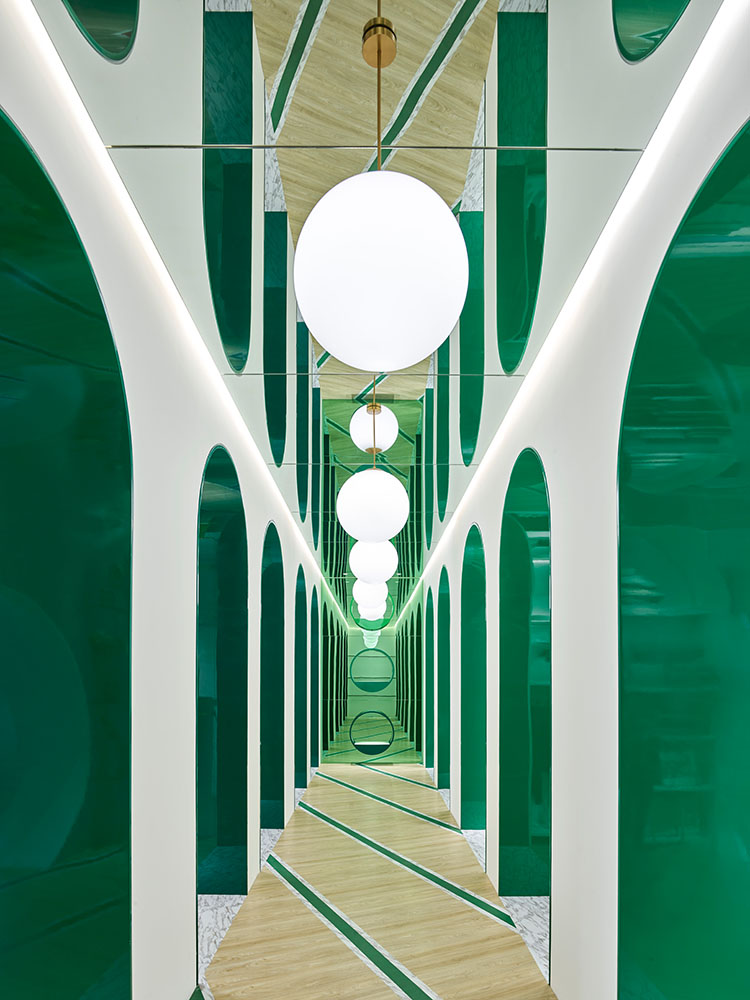 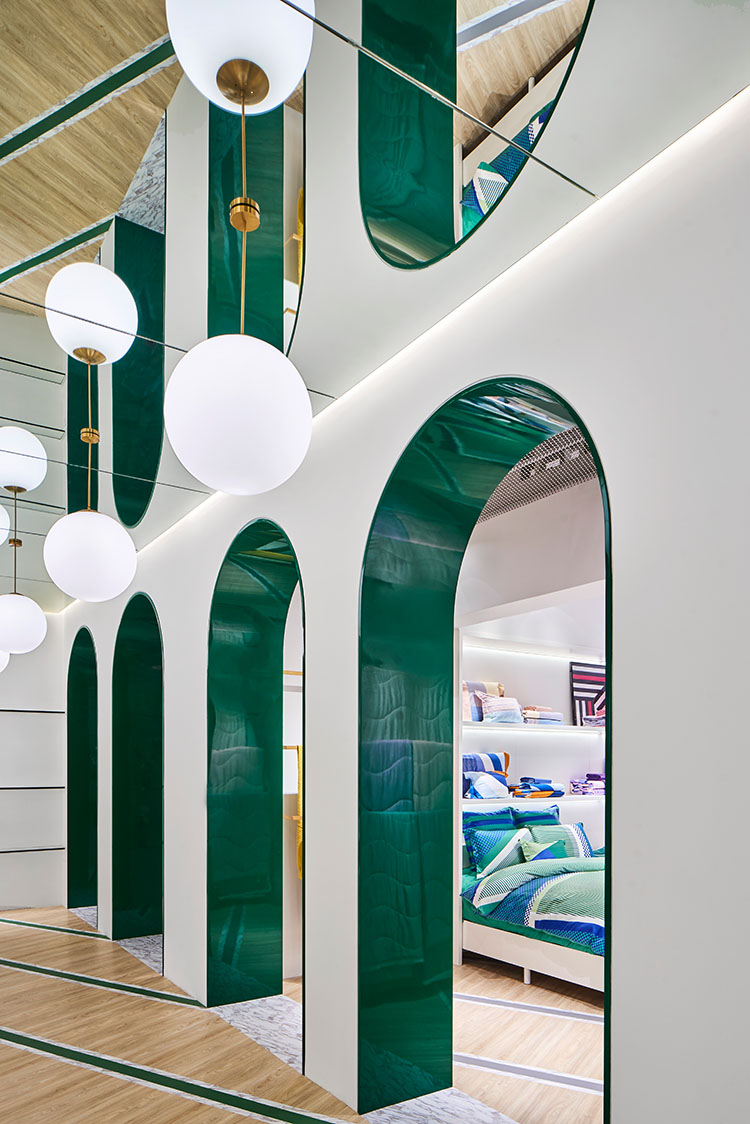 Studio MVW’s custom-designed display furniture has been used throughout – inspired by a series of 1970s Pierre Cardin sculptures that blended the decorating function with an artistic personality. “My furniture is sculpture,” says Cardin. “I like to work as a sculptor; it’s my life, my passion, my happiness and my joy. The reason of my work.” Studio MVW also incorporated grid motifs and geometry detailing into the display cabinets and the loose furniture to further emphasize Cardin’s space age style.

In all, the interior pace expresses beauty, flexibility, harmony and balance, allowing the imagination free reign. The composition of forms and colors creates a spontaneous joyful design, and an experience full of surprises due to the different perspectives experienced throughout.