Set behind a striking façade of Scottish stone at the point where Edinburgh’s historic Old Town meets the New Town, Market Street Hotel emerges as a cultural gateway to both the city’s storied past and its pulse-quickening present. Award-winning design studio FG Stijl have devised the visual concept of the 98-room hotel to pay homage to the capital’s character and historic narrative, while simultaneously exploring Scottish cosmopolitanism. 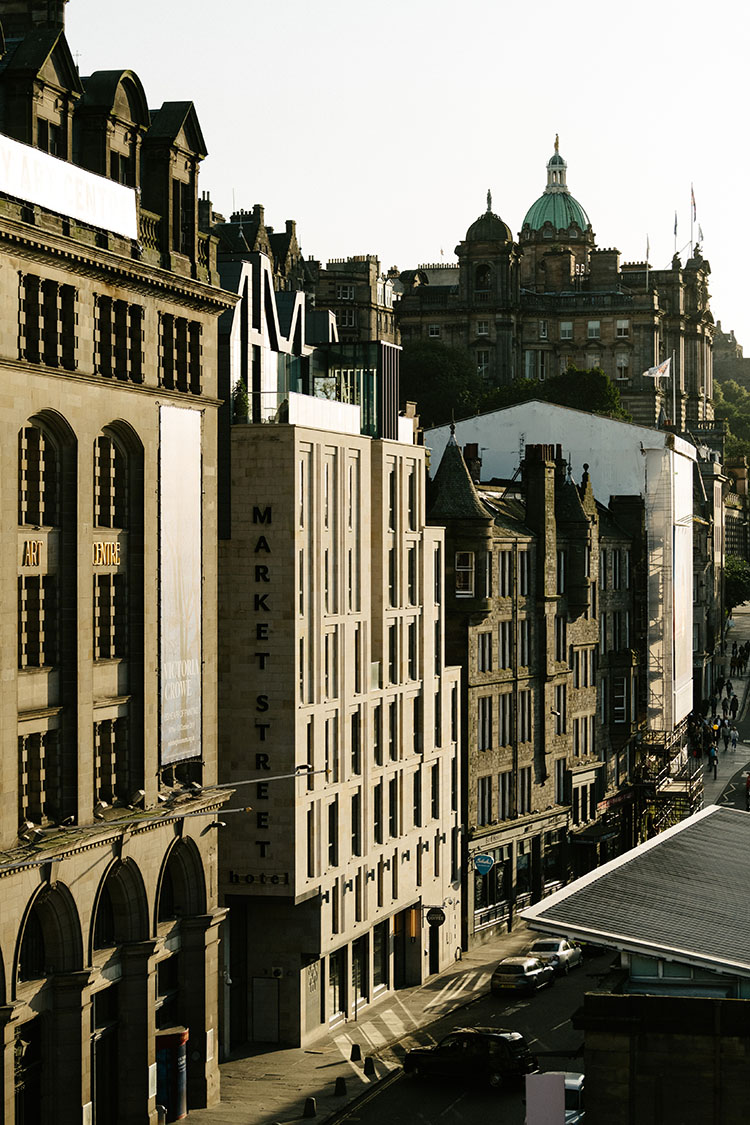 Cracked, earthen walls are juxtaposed against the clean, minimalist lines of contemporary furnishings, and unexpected bursts of traditional tartans and heritage fabrics provide an experiential element to the hotel’s aesthetic. Should guests feel the need for even deeper immersion in this most singular of urban locations, the property’s spectacular rooftop Champagne lounge, Nor’ Loft, offers views across the city’s historic landscape and celebrated icons. 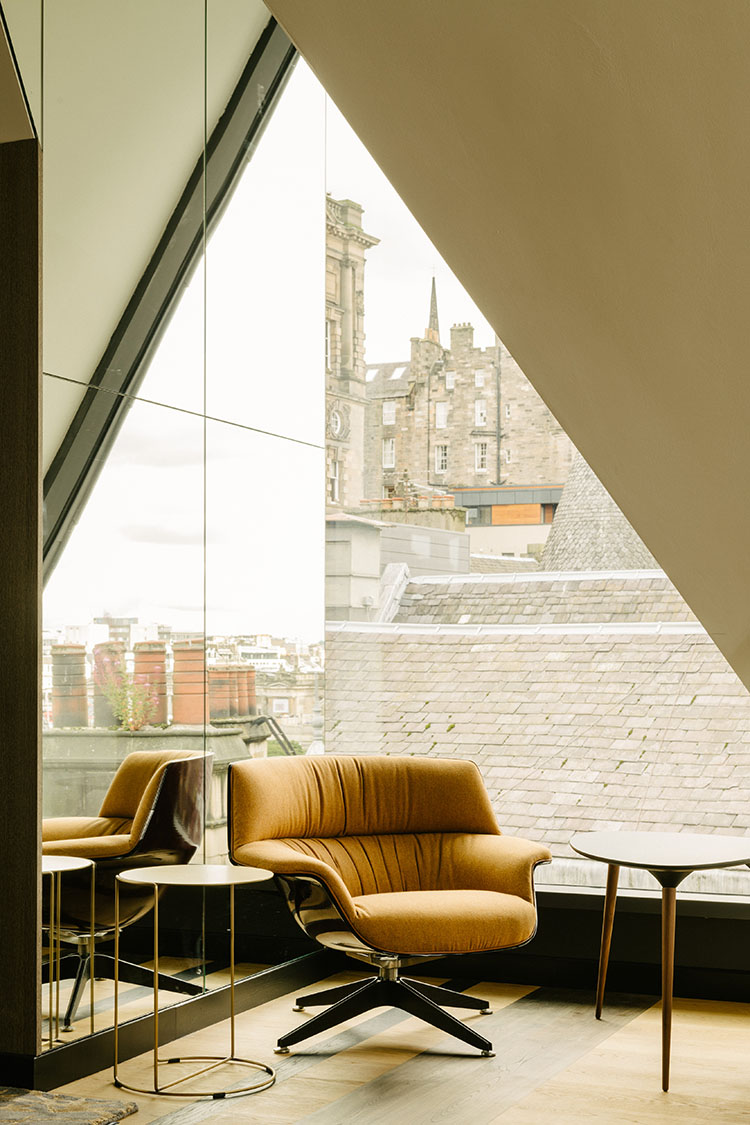 Occupying such a prominent space in Edinburgh’s cityscape, it was vital that the structure of Market Street Hotel harmonized with its surroundings, while still maintaining a unique footprint that celebrates the city’s cultural zeitgeist. Acclaimed architecture practice jmarchitects were tasked with creating a bold, modern hotel that honors the age-old architectural diversity of the city without slipping into imitation.

The result is a beautifully layered composition; locally-sourced white stone cladding mirrors the tone of Edinburgh’s Craigleith sandstone, and striking whinstone recesses nod to both the city’s weathered slate roofs and the dark, shadowy slots of the medieval “closes”. However, it is at the hotel’s pinnacle that the balance between old and new is best expressed—the innovative folded, stone-clad roofscape provides a truly unique architectural standpoint, and yet blends seamlessly with surrounding spires. 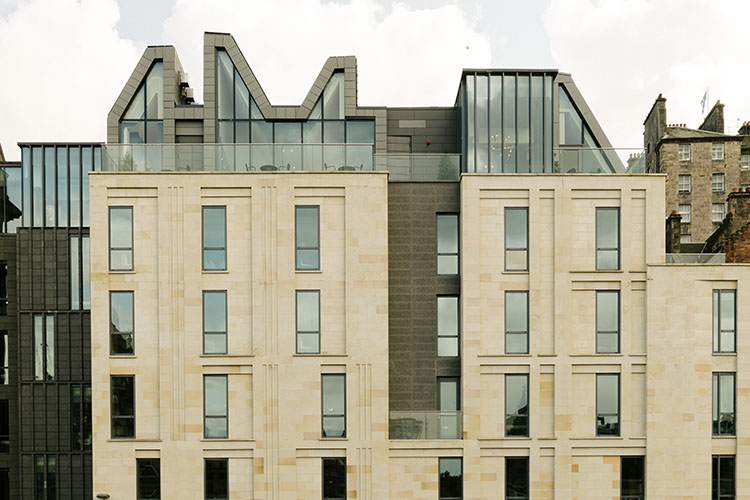 This meaningful connection with the location continues throughout the hotel’s interiors, starting with an expansive wall in the entrance that pays homage to the dried earth of the “Nor Loch” lake that used to sit on the grounds. Further in, a self-defined concept of ‘brutal beauty’ works to update the archetypal Scottish fortress aesthetic with a hefty dash of contemporaneity. As such, Amsterdam-based design outfit FG Stijl have created a tapestry of wood, stone, glazed bricks, soft wallcoverings, wool and tartan, adding mirrors and a signature lighting concept for textural depth. Traditional Scottish motifs have been reimagined and cleverly woven into the multifaceted design, culminating in a series of five floating copper fireplaces that together replicate the first notes of “The Flower of Scotland”. 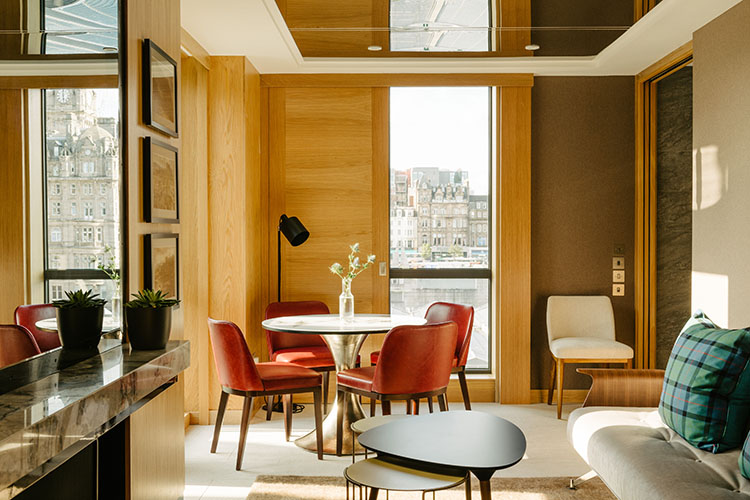 A modern take on Baronial materiality and composition also provides the inspiration behind Market Street’s 98 rooms and suites. Organic, natural materials such as oak and locally-sourced stone provide a tactile canvas for modern design classics from the likes of Fritz Hansen and Saint Luc, alongside custom-made furniture and handcrafted local pieces. Charming wooden shutters are inspired by the traditional window fixtures of the Old Town and create a warm, homely atmosphere, which is further encouraged by the use of fabric wallpaper and soft woolen accents. 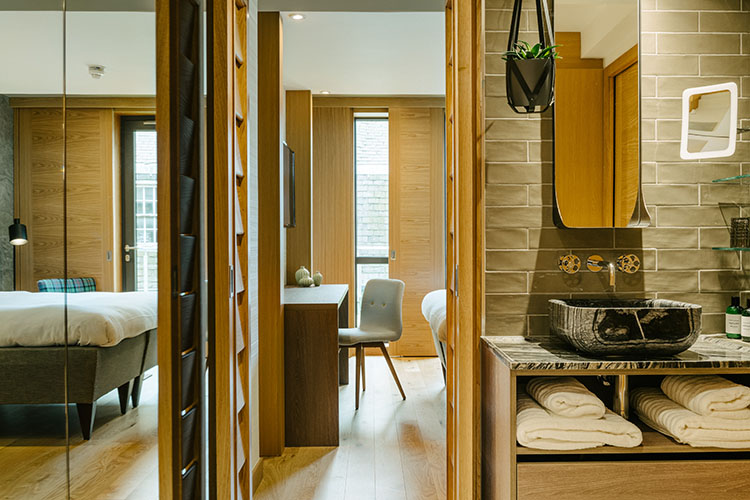 Bathrooms have been designed as stylish anterooms, outfitted in luxurious marble and featuring solid stone basins, rainfall showers by Via Bizzuno and amenities by vegan brand Votary. The bathroom in the hotel’s signature Alba Suite adjoins a spacious dressing room, whereby a pair of double doors lead guests through to the master bedroom and stunning city views beyond. 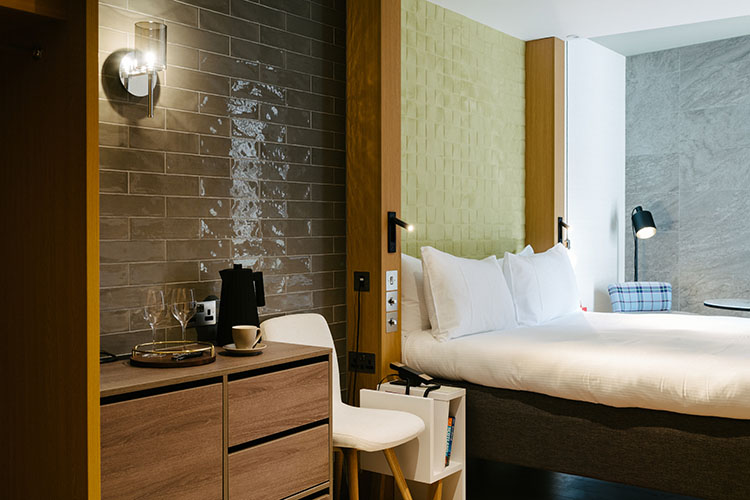 Named for the loch that previously occupied the site of the hotel, Nor’ Loft is the hotel’s rooftop Champagne lounge. An achingly chic addition to the city’s UNESCO World Heritage skyline, the 7th-floor space is centered around an elegant Champagne table boasting over 20 prestige labels and a curated spirits list. Open throughout the day serving breakfast, afternoon tea, and small plates—all crafted in an open kitchen in full view of diners—the Nor’ Loft’s culinary concept focuses on classic flavors and locally-sourced, seasonal ingredients prepared with an imaginative flair. By night, the lounge transforms into a vibrant social hub illuminated by the open fireplace, welcoming guests and locals alike with its laid-back atmosphere and peerless panorama.