London-based architects Orms has recently completed the conversion of the former Camden Town Hall Annexe, a 1974 Brutalist structure overlooking King’s Cross, into the 266-room contemporary hotel, The Standard. The project marks the iconic brand’s first foray into the UK market since launching in the United States.

Responsible for the exterior shell and core, Orms worked alongside interior designer Shawn Hausman Design and interior architect Archer Humphryes on behalf of Crosstree and The Standard. 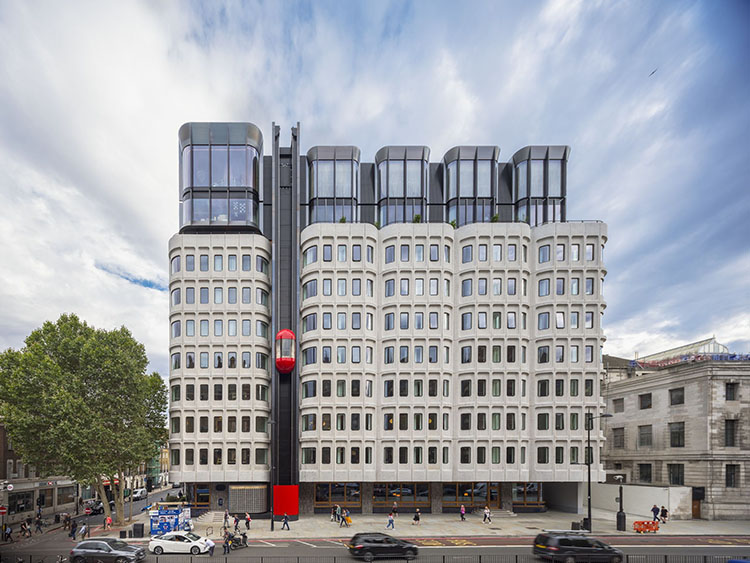 A former theatre in the 1920s, Camden Town Hall Annexe was redesigned in the brutalist style in the 1970s by Camden’s in-house architects, as an annexe to the adjacent Neo Palladian Camden Town Hall, to provide offices and meeting rooms for the council’s workforce.

Orms began the conversion from offices to a contemporary boutique hotel by retaining and cleaning the original brutalist concrete frame. The original tinted-windows in their distinct rounded rectangular frames were then replaced with clear glass, and on the building corners, rounded panes with high-grade acoustic specification were inserted to combat noise from the busy roads below. 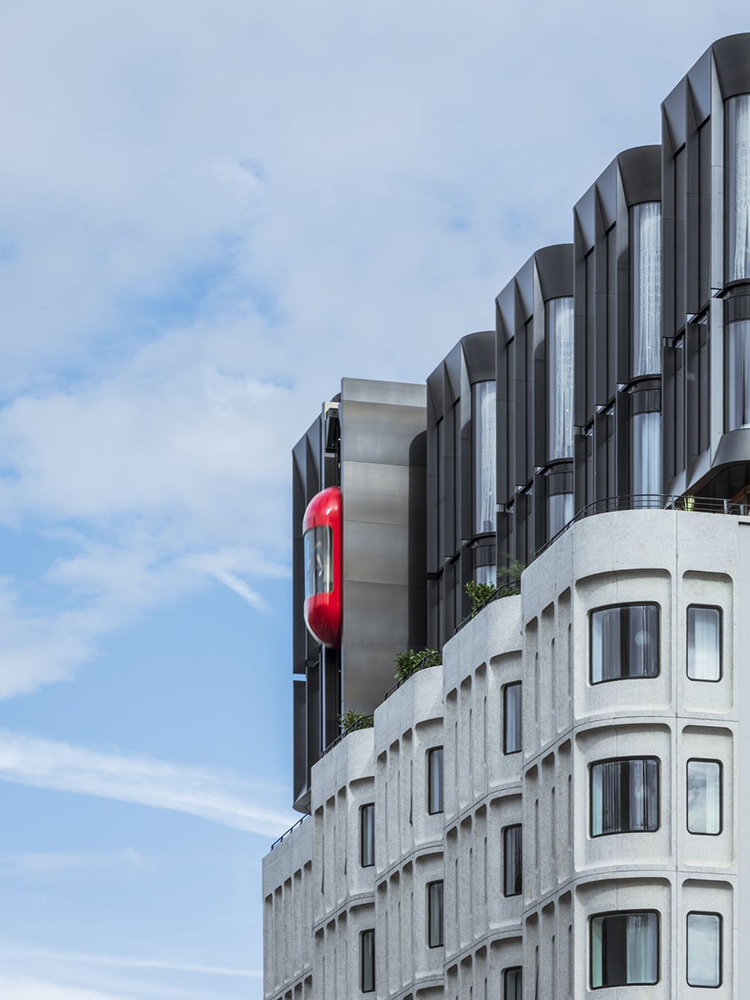 The façade’s existing precast concrete panels formed an integral part of the building’s structure and so could not be removed or altered without significant structural remodelling, so separating the annexe from the neo-classical Town Hall was entrusted by Orms to convert the former Camden council offices into a shell and core suitable for premium hospitality facilities. 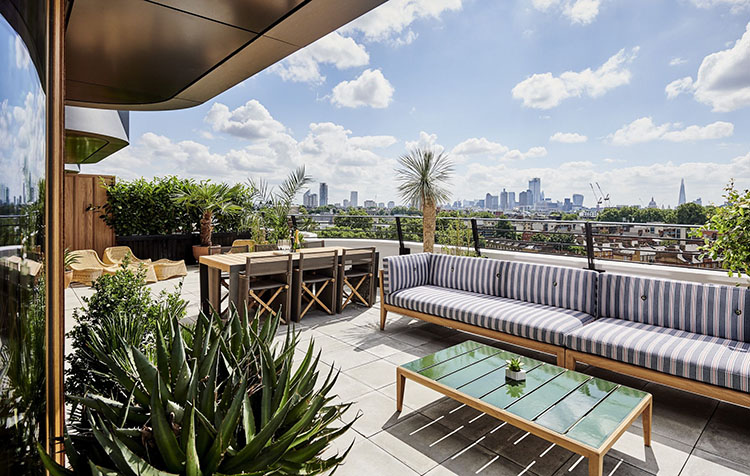 To do this Orms had to remove the stair core and the concrete plant enclosure at roof level that joined the Annexe and Camden Town Hall together and allowed access but blocked important views through Tonbridge Walk to St Pancras and beyond.  By removing, Orms allowed the sculptural mass of the building to be expressed as a stand-alone building for the first time. However removal of the core also meant that the building’s stability was partly reduced, and so the architects used the addition of new internal goods lift core and a shear wall to re-stabilise the building. 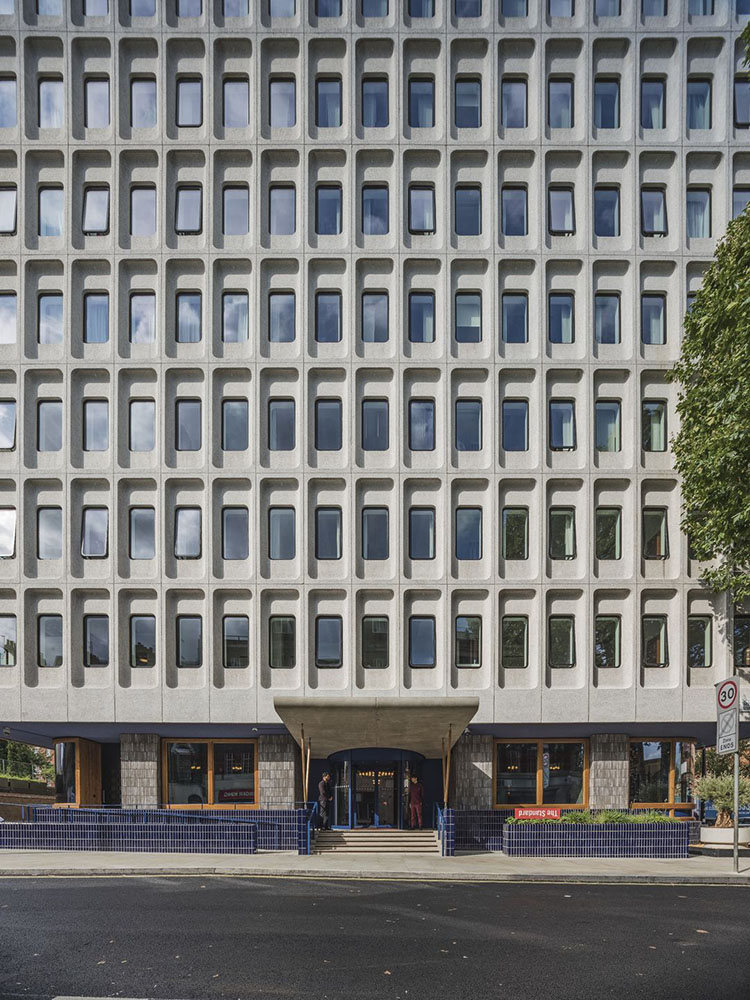 Adding three new-build storeys to the existing structure was a key component of Orms’ brief, and to accommodate the additional weight of the three new floors, Orms collaborated with Structural engineers Heyne Tillett Steel to add new steel columns to the existing structure. These were threaded like needles down through the existing waffle slabs to the 1st-floor transfer slab and concrete columns below.  These columns needed to be carefully aligned with the waffles on each floor and be incorporated into the build-up of the new dividing walls between bedrooms. 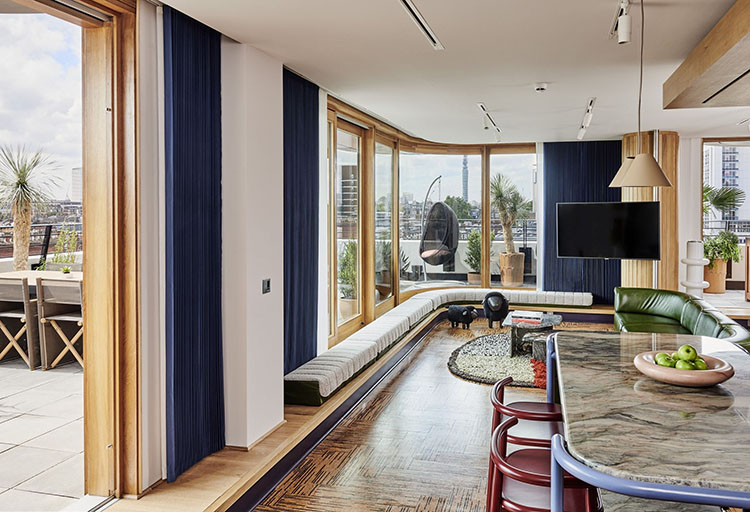 “Our proposal to reuse, adapt, and extend the existing Brutalist building was supported by English Heritage,” says Simon Whittaker, Associate at Orms. “They especially welcomed the reuse of the annexe on the grounds of its ‘considerable design merit’ and accepted that the height of the extension was ‘integral for making the design fit for purpose’.  The bold design has completely transformed the perception of the building, reimagining it for its new use as a destination hotel.” 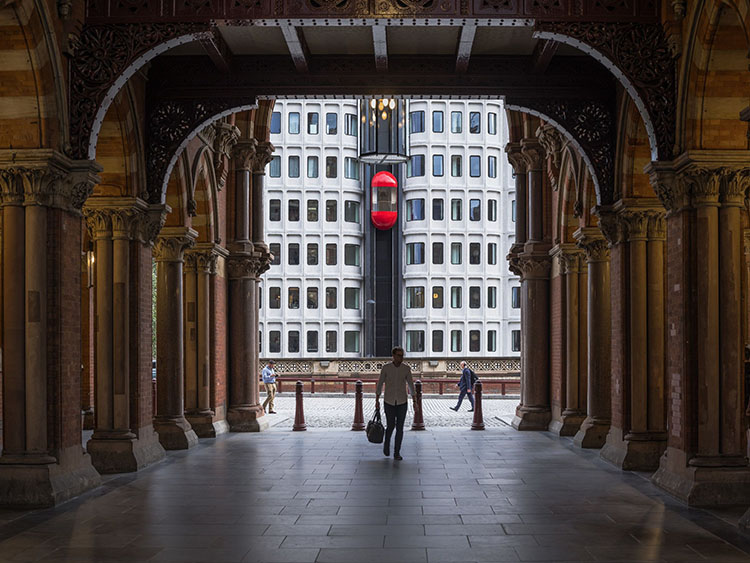 To create the rooftop extension PVD coated stainless cladding was used and deliberately angled to form a solid, sculpted roof element, catching the light differently throughout the day to create a constantly changing display. On the 8th-floor, facades constructed in timber and glass allow the interior materials of the bedrooms to ‘flow out’ onto their private terrace which feature outside baths. Above these, the 9th and 10th-floor bays cantilever out – to match the profile of the existing building below – to host the new restaurant and bar, and a roof terrace above. 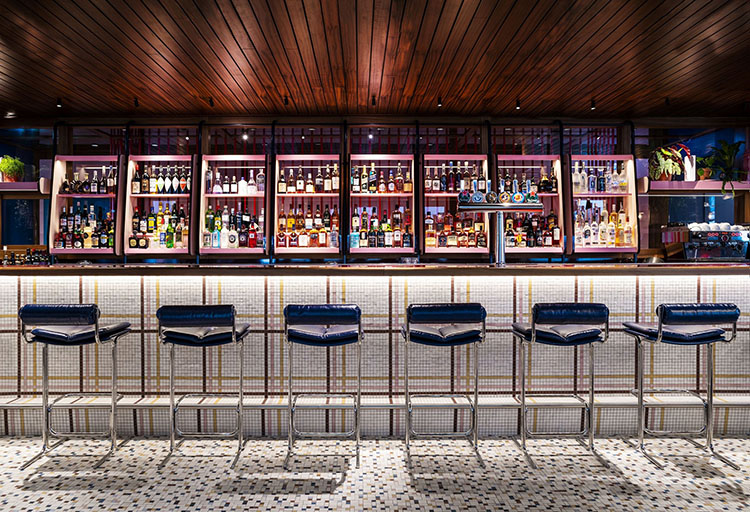 Orms designed dramatic 4.6m floor to ceiling heights on the top level, maximizing the views to St Pancras and Kings Cross to the north and the city, and West End to the south. The top floor is served by a dedicated external shuttle lift which glides up the north face of the building opposite St Pancras. Its red colour – chosen by Shawn Hausman Design and based on the iconic London bus – and rounded form gives the building an additional striking feature on its public face. 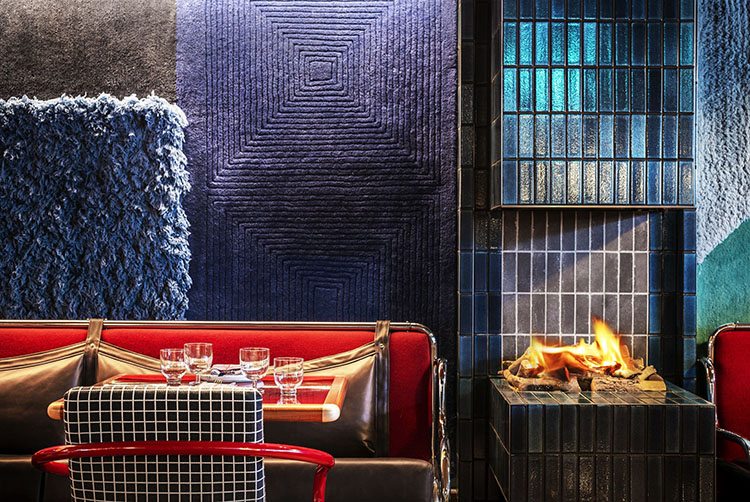 At ground level, a large format, blue revolving door marks the new entrance to reception under a new precast concrete canopy.  The characteristic design style of Shawn Hausman Design and Archer Humphryes carries its way up through the variously configured hotel rooms and suites, and throughout the common hospitality spaces. 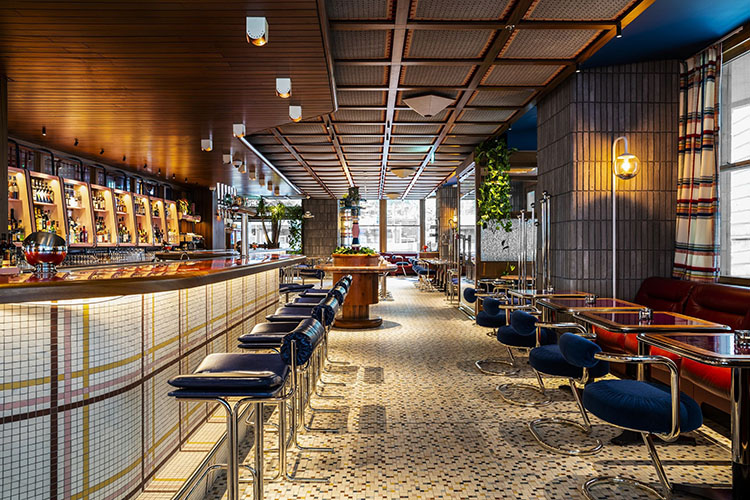 Re-designed façade entrance points and a reinstated public garden to the south, originally closed due to anti-social behavior, connects the hotel to the local streetscape and the hotel’s bar and restaurant. Providing a tranquil escape from the bustle of Euston Road and featuring board-marked concrete planters and seating areas, the garden boasts lush new planting with ‘feature’ trees and lighting. A new, permanent east-west routhye for pedestrians and cyclists has also been created through the garden between Argyle Street and Tonbridge Walk. 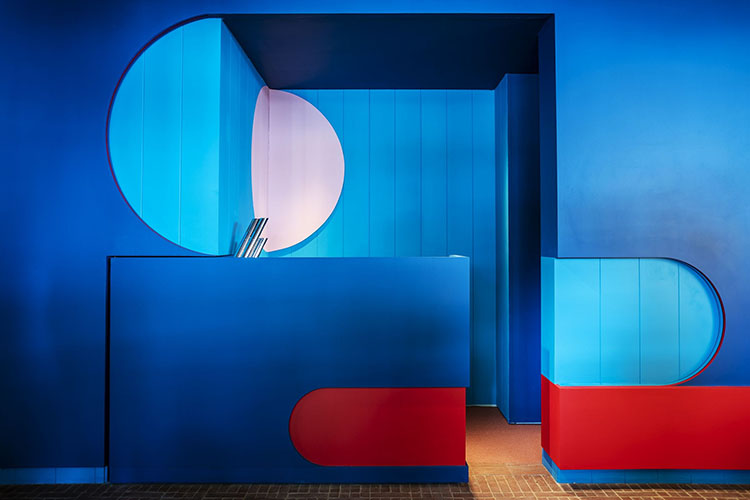 “We are delighted to have preserved and reimagined a much-maligned 1970’s office building into a new iconic hotel in the rapidly evolving King’s Cross area, in close partnership with The Standard, Orms, Shawn Hausman, Archer Humphryes and all of the design and construction team. While London is known and loved the world over for its traditional Georgian and Regency period architecture, The Standard, London shows the art of the possible with more recent Brutalist gems,” said Sean Arnold, Co-Founding Partner of Crosstree Real Estate Partners. 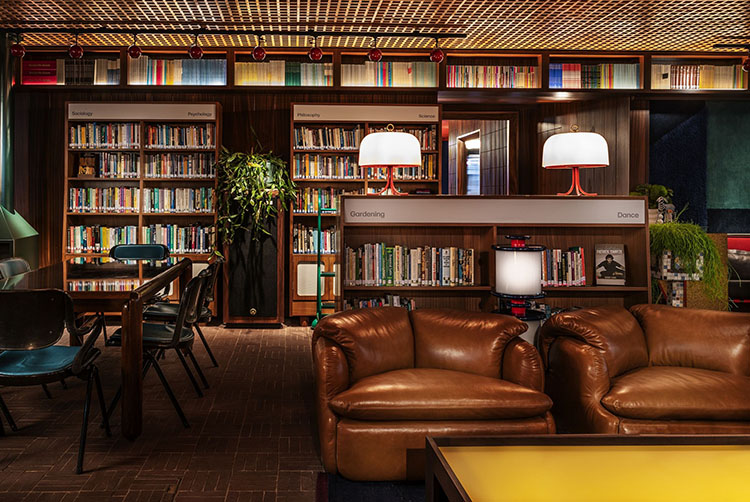 The resulting hotel offers a myriad of facilities including a library lounge, which pays respect to the original use of the space that the team inherited – designed to bring a tactile quality and to spark conversations between people. The ground floor reception-come-library hosts two restaurants and a bar. Upstairs, the 266 rooms configured in 42 unique styles over seven of the existing floors and 2 new floors, range from rooms placed within the core, windowless ‘sanctuaries’ designed for a restful night’s sleep, to terraced suites with outdoor bathtubs overlooking St Pancras. Above this, the top floor of Orms’ three storey extension houses an additional restaurant and roof garden reside. 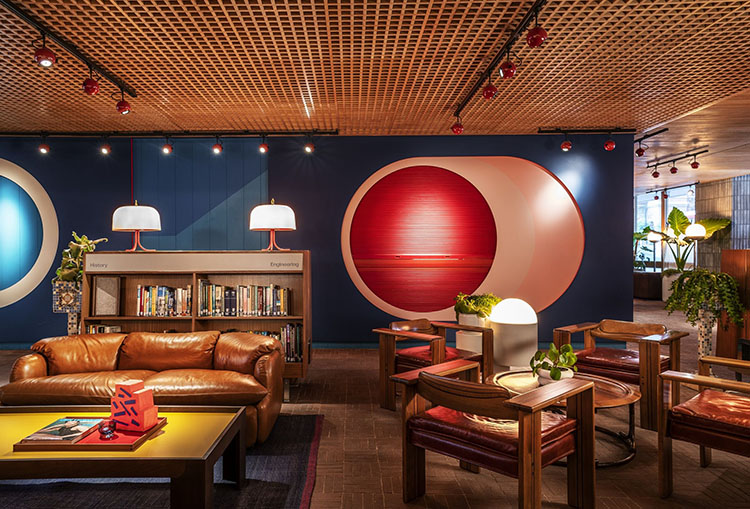 “We could not be prouder of what The Standard team and our many collaborators have created, in a beautiful, overlooked building that was almost left for naught. I look forward to welcoming the world in to see and, more importantly, feel what it is that makes The Standard so special,” said Amar Lalvani, CEO of Standard International. 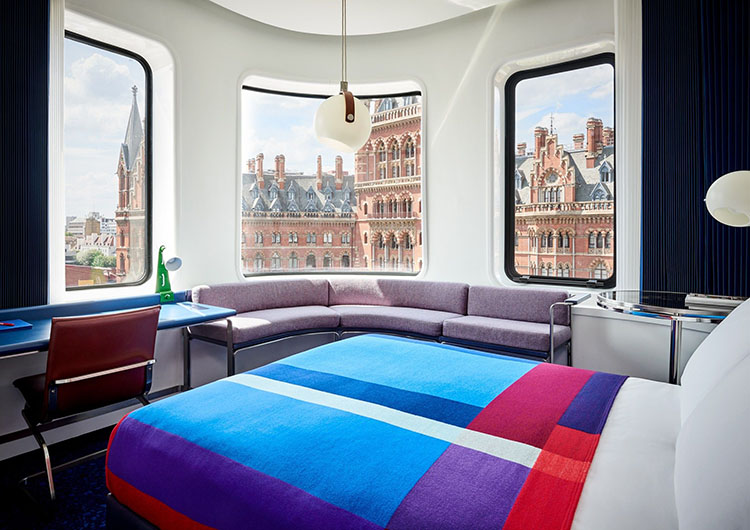 Informed and inspired by Camden’s history, from politics, intellectuals and punk rock bands to the mischievous underbelly of King’s Cross, The Standard London pays homage to both its location and the building while recognizing the remarkable transformation taking hold of the neighborhood.