After months of anticipation, this Friday, November 15, Starbucks will open the Starbucks Reserve Roastery Chicago – an immersive experience dedicated to roasting and crafting small-batch coffee. The Chicago Roastery is the company’s sixth roastery, and at 35,000 square feet, is its biggest showcase yet. It is a five-story tribute to the city’s art, architecture and culture – and the indelible mark the city has made on Starbucks.

Step inside the front doors on Michigan Avenue and you’re immediately surrounded by the sights, sounds, and smells of coffee. Here, burlap bags of green (unroasted) Starbucks Reserve beans are roasted and then piped to coffee bars located on each level where they are crafted into specialty coffee beverages only found at Starbucks Reserve Roasteries and Stores. The Roastery offers seven different brewing methods – from the classic French press to the theatrical siphon – and there several beverages on the menu that are exclusively available at the Chicago Roastery. 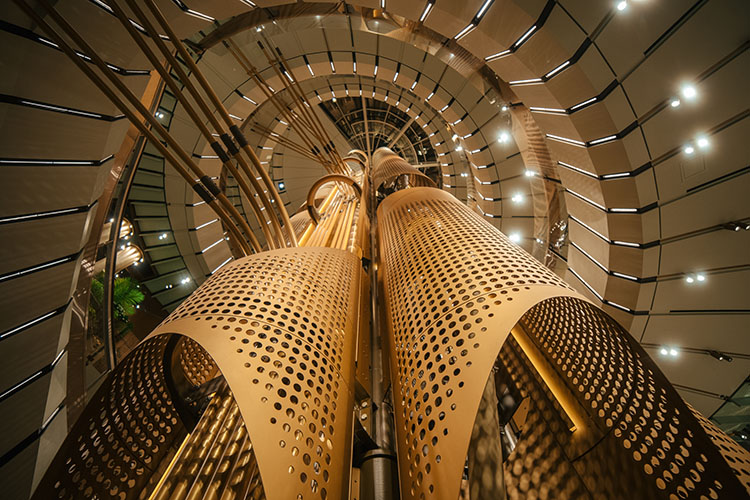 Standing as the centerpiece of the Roastery is a 56-foot steel cask, a sculptural blend of form and function, where coffee beans go to rest and de-gas after being roasted before they are piped to the coffee bars throughout the Roastery. Encircling the cask is a curved escalator – the Midwest’s first – taking visitors from the first to the second floor and on a 360-degree tour of the roasting, brewing, and scooping below. Looking outwards provides a view of the Magnificent Mile through the curved glass windows of the building. 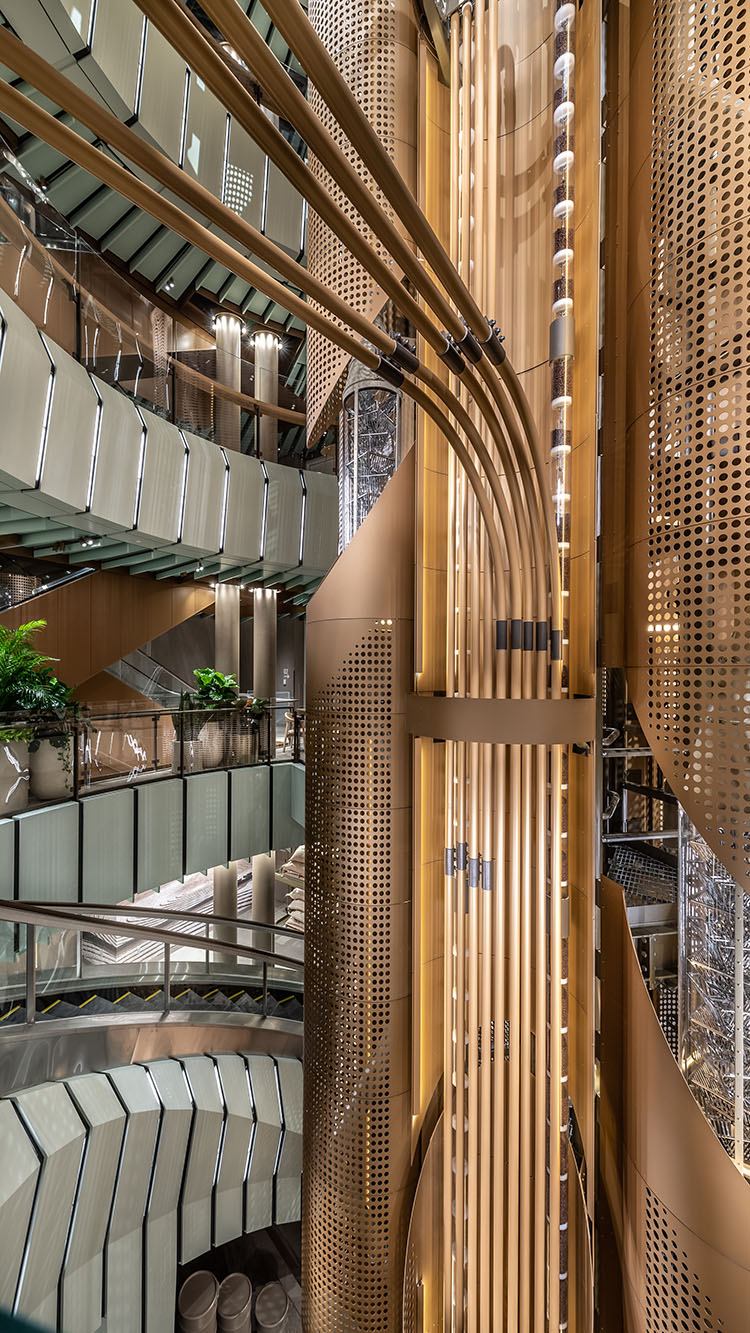 All of the six Roasteries have their own custom artistry, and Chicago features three hand-painted murals from local artists. Every Roastery has a unique Starbucks siren; Chicago’s, located between the third and fourth floors, was painted by local Chicago artist David Anthony Geary. “She’s floating there, weightless in the space, holding a coffee branch. In the daytime, she’s bathed by light from the skylight and she slowly transforms throughout the day,” Enomoto said.

A progressive mural by artist Eulojio Ortega, nicknamed “The Chicago Muralist,” pays tribute to the farmers and coffee-growing regions of the world. The mural begins in a staircase between the first and second floors and spans all five stories, following the journey of coffee from tree to cherry to harvest. 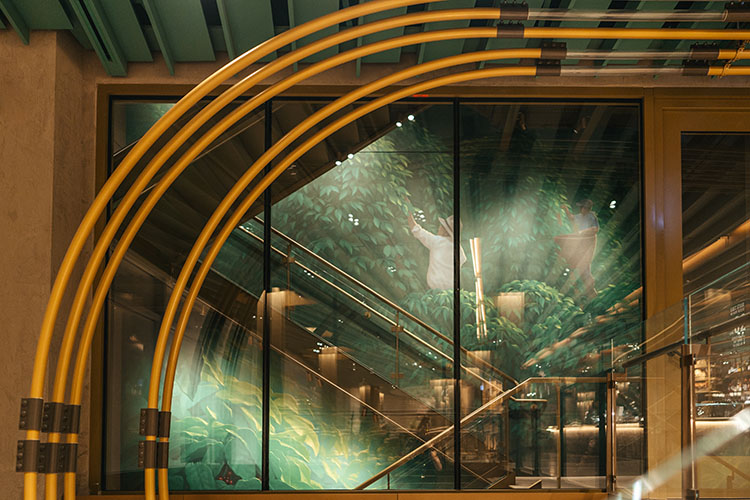 All of the Roasteries have iconic ceilings designed to support both the overall design as well as seamlessly incorporate functions such as acoustics, HVAC, Wi-Fi, lighting and more.

The ceiling in Chicago, with rings of outward spiraling shades of green, was designed to symbolize rays of sun touching rolling hills of green coffee trees.  The shades of green were inspired by the agricultural nature of growing coffee.  Illuminated ‘sunbeams’ radiate outward throughout the floors. 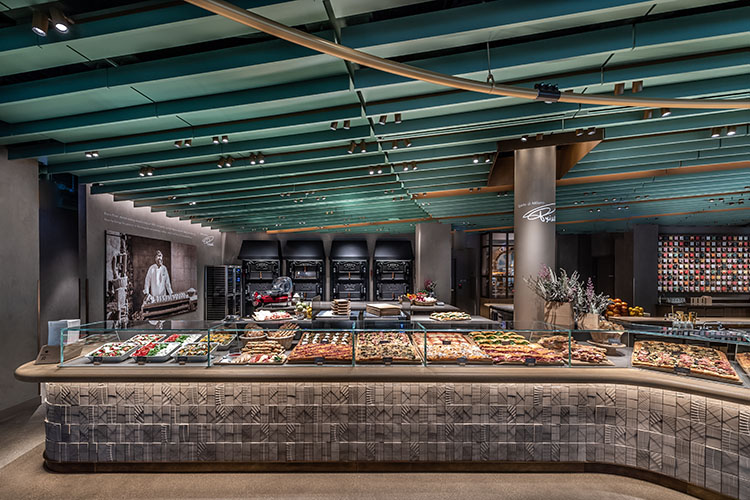 In addition to serving specialty coffee beverages, the Reserve Roastery Chicago features an Arriviamo Bar which serves a menu of signature cocktails inspired by the culture of Chicago such as the Roastery Boilermaker and Union Stock. Throughout the Roastery customers will also be able to enjoy freshly baked bread, pastries and pizzas as well as aperitivo bites from the Italian boutique bakery, Princi. 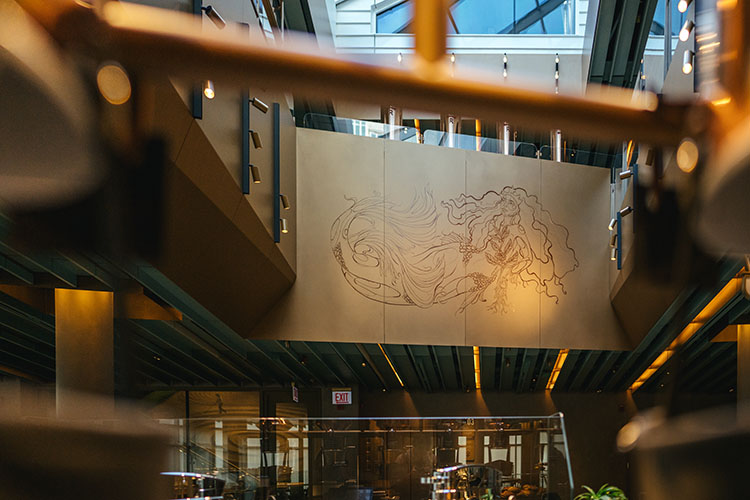 The Chicago Roastery is the only Starbucks in the U.S. to offer on-demand liquid nitrogen gelato designed to pair with Starbucks Reserve coffee. Nitrogen gelato previously debuted at the Milan Roastery when it opened in September 2018. The barrel-aged coffee bar showcases a variety of spirit-free coffee beverages whose beans have been carefully aged in barrels. Here, visitors can explore a menu of cocktail-inspired coffee creations exclusive to the Chicago Roastery, including the Smoked Cold Fashioned and Minted Cold Brew. 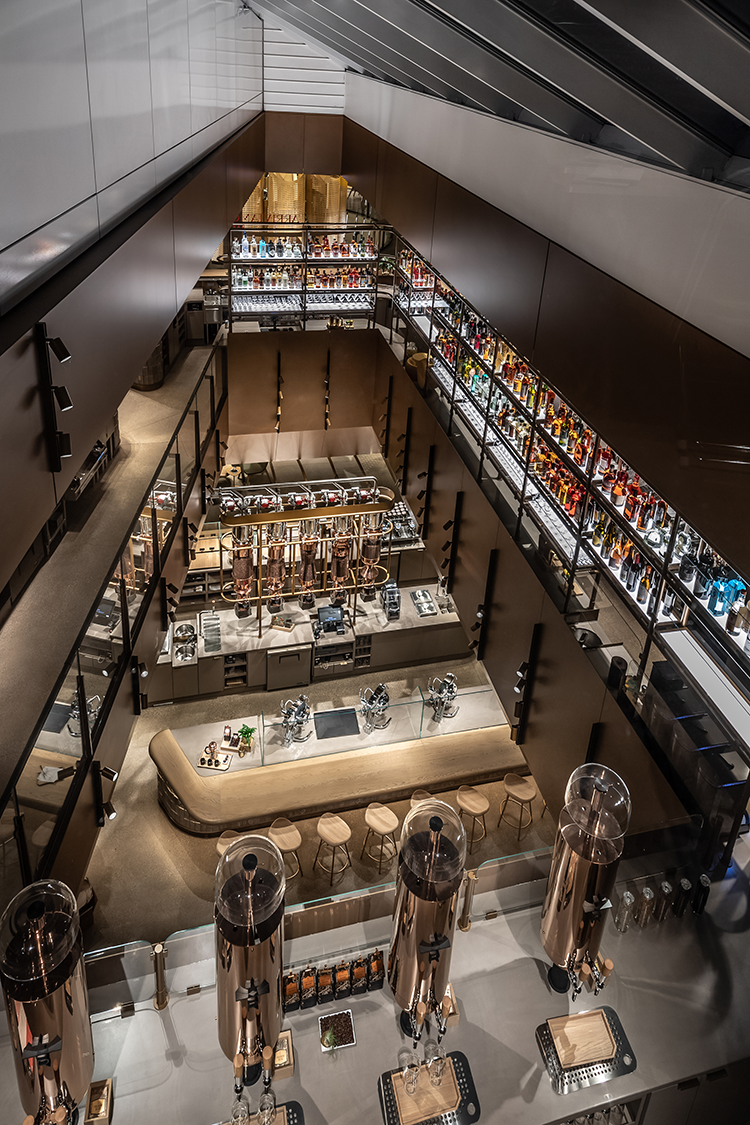 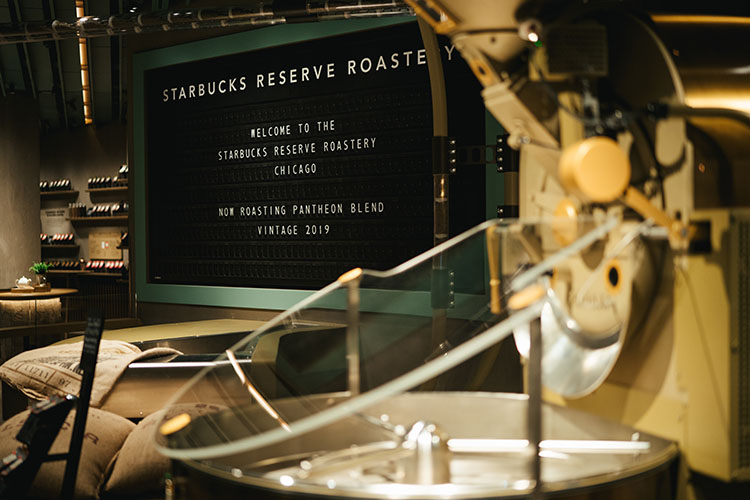 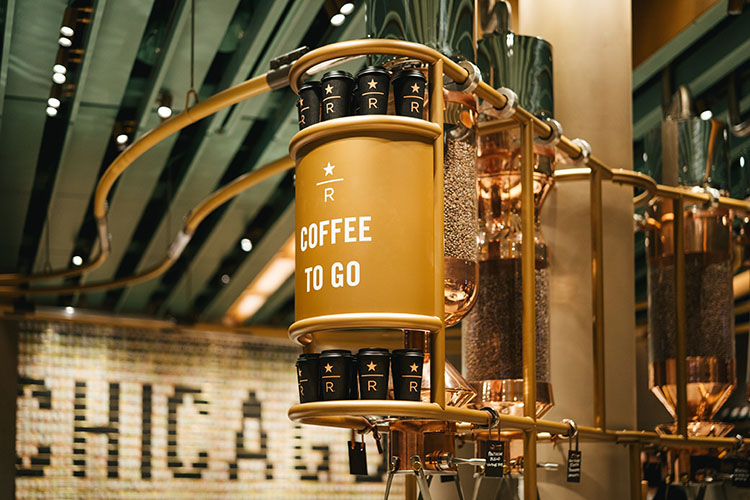 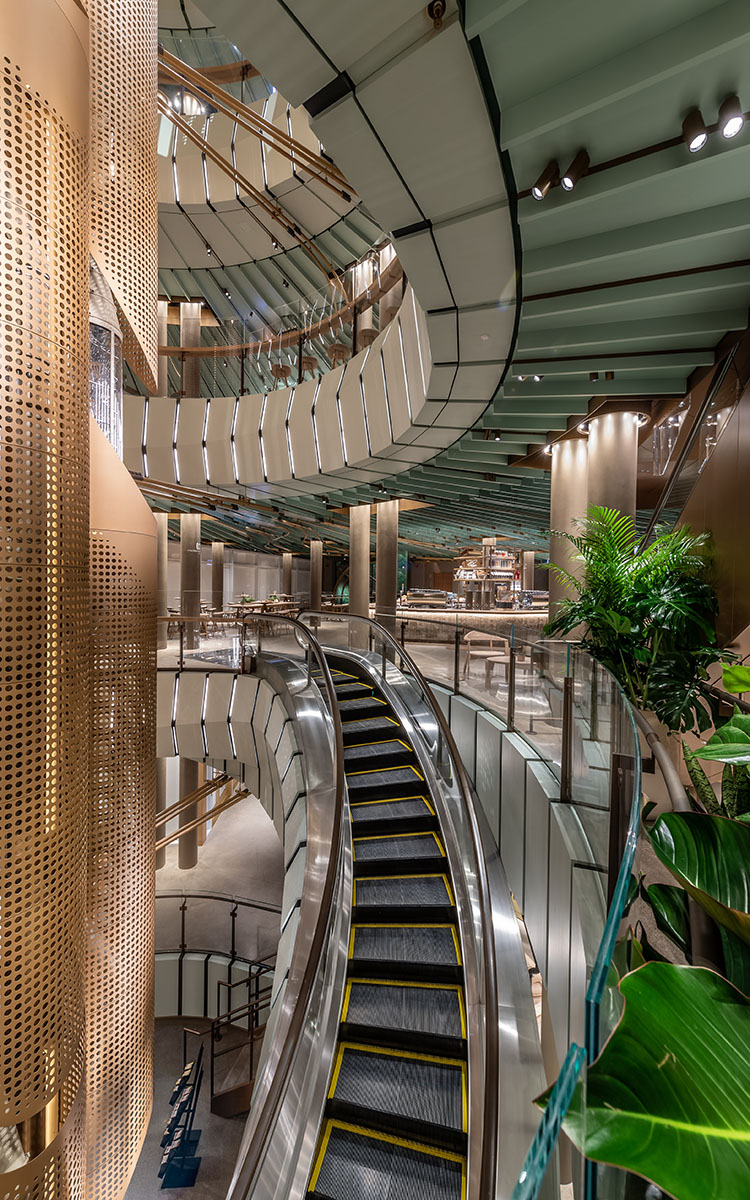 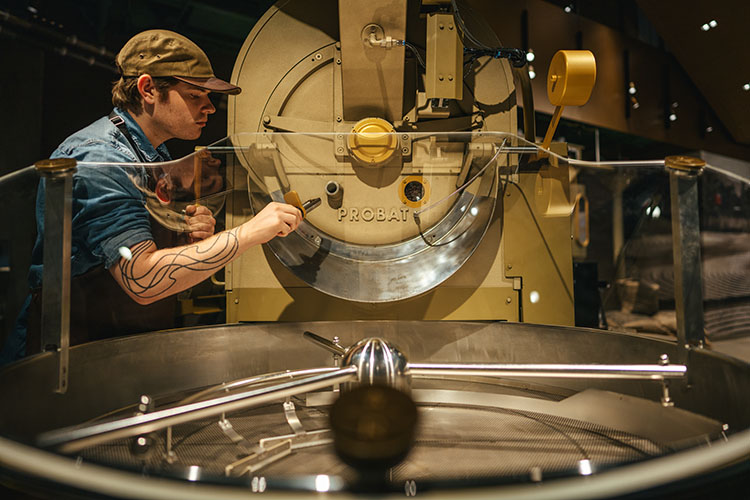 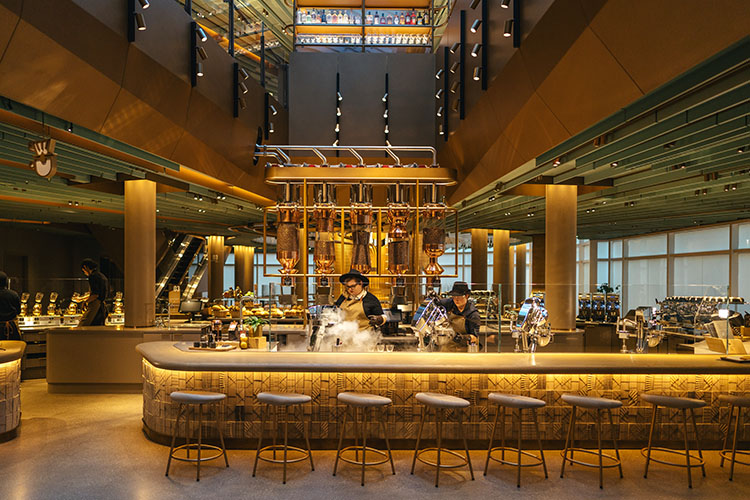 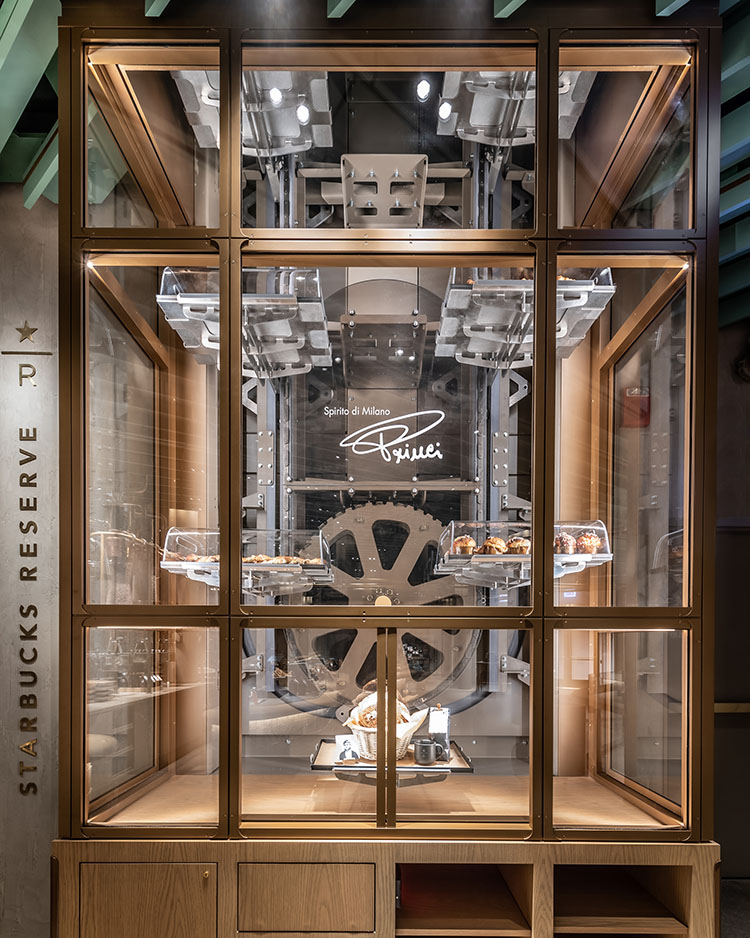