Studio MORQ has recently completed the “Scenario”, an exclusive boutique hotel situated in the Vicolo delle Ceste in the IX district – the area that encloses the Pantheon, Largo di Torre Argentina, Via delle Botteghe Oscure and Piazza Venezia in Rome. Scenario is an excellency, perfect for travelers who want to savor a contemporary and authentic atmosphere in the beating heart of the Eternal City.

After the experience with the Boutique Hotel dei Barbieri, a group of entrepreneurs led by Giuseppe Massimo Piperno, has decided to open a new hotel in an ancient four-story building just a few steps from the Pantheon. 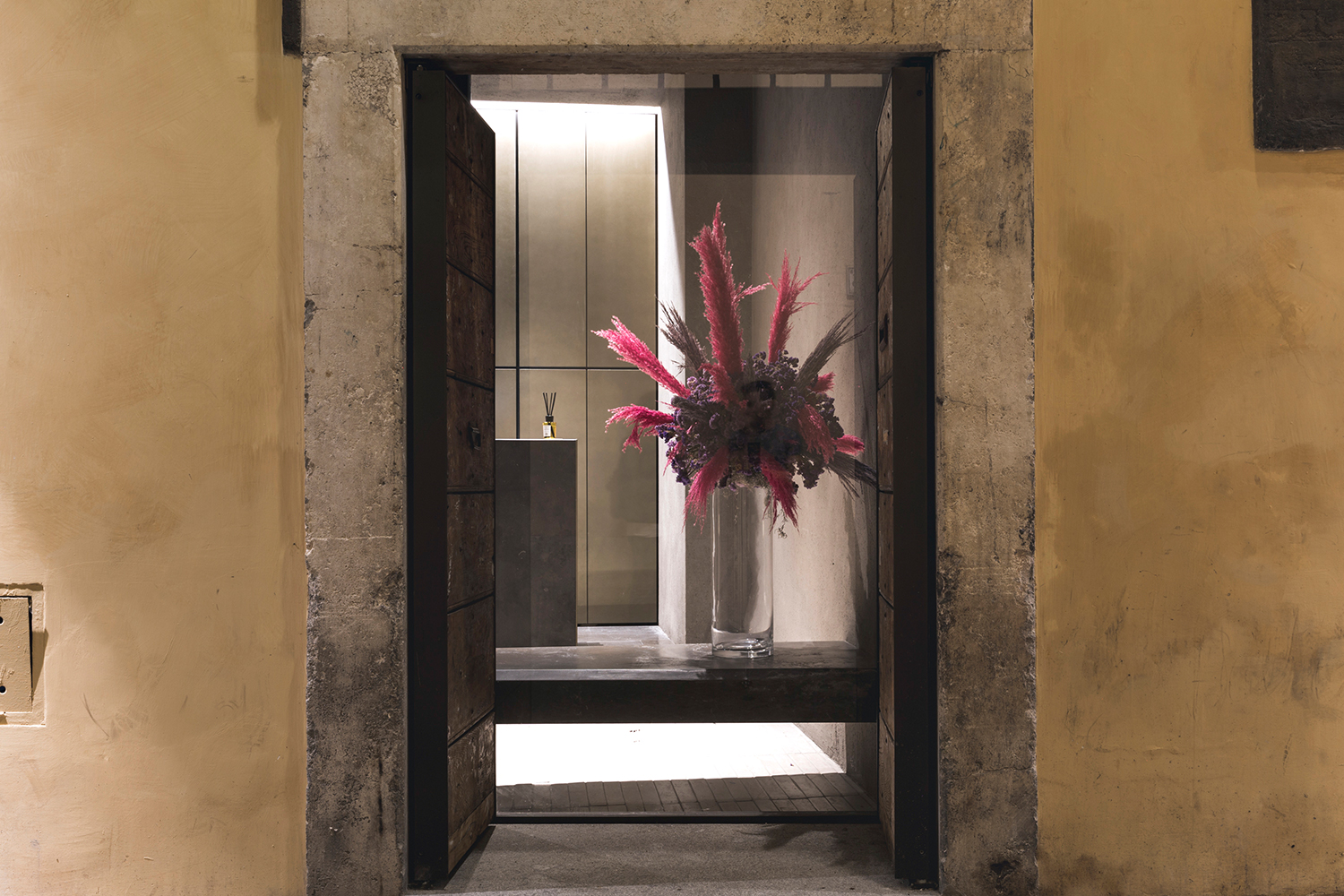 The Studio MORQ has signed the renovation project with the intention of bringing together the elements of contemporary Rome and those of historical Rome inside Hotel Scenario. An intervention that took place in harmony with the surrounding environment but at the same time endowed with a strong identity: “A narration that follows travelers from their arrival at the hotel until their accomodation in their room and it gives the impression of an elusive reality that continues to evolve, which focuses on reflections, lights and shadows, as well as on evocative objects that stimulate emotions and actions”.

The name ‘Scenario’ was not casually given to this hotel. A clear theatrical reference was chosen to emphasize the environment in which the scene takes place: “We would like for the guest to feel like the protagonist of his stay, as if he were to be in the center of a stage in a theater”, says Giuseppe Massimo Piperno. 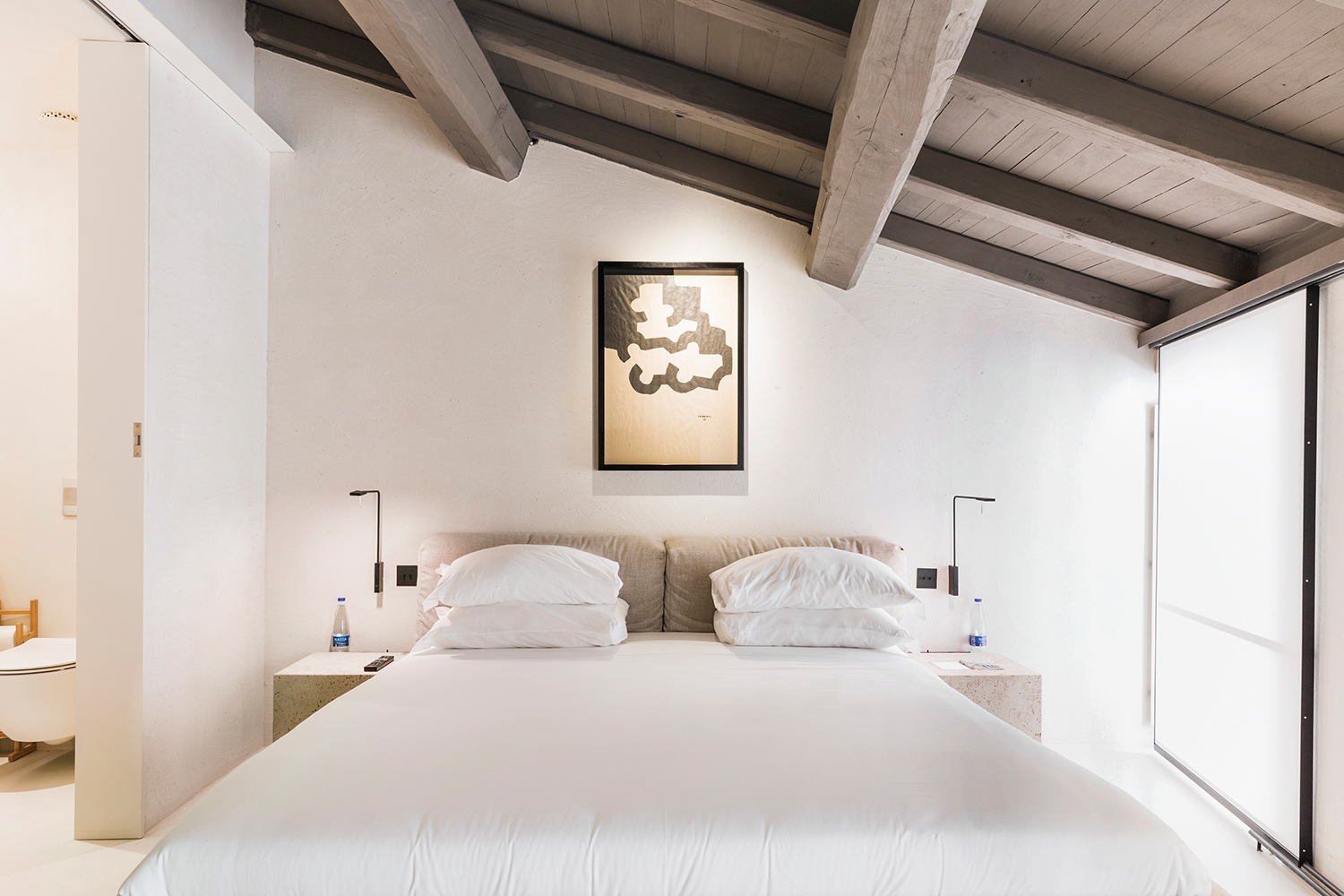 The Hotel is composed of 12 suites of approximately 20mq filled with every kind of comfort. They are beautiful spaces in which one can lay down and relax during their Roman holiday. When entering the rooms, each one is laid out differently and the traveler is immersed in an intimate atmosphere dominated by the different shades of silver and beige. The high wooden ceilings bring back the past while the material of the thick walls coated in clay, enhance a more contemporary feature.

The furniture is simple and authentic and is made with natural materials like wood, metal, linen and leather. Each piece of furniture was custom designed by Studio MORQ and was created by local artisans who, with care and skill, contributed in giving value and character to the Boutique Hotel in Vicolo delle Ceste. 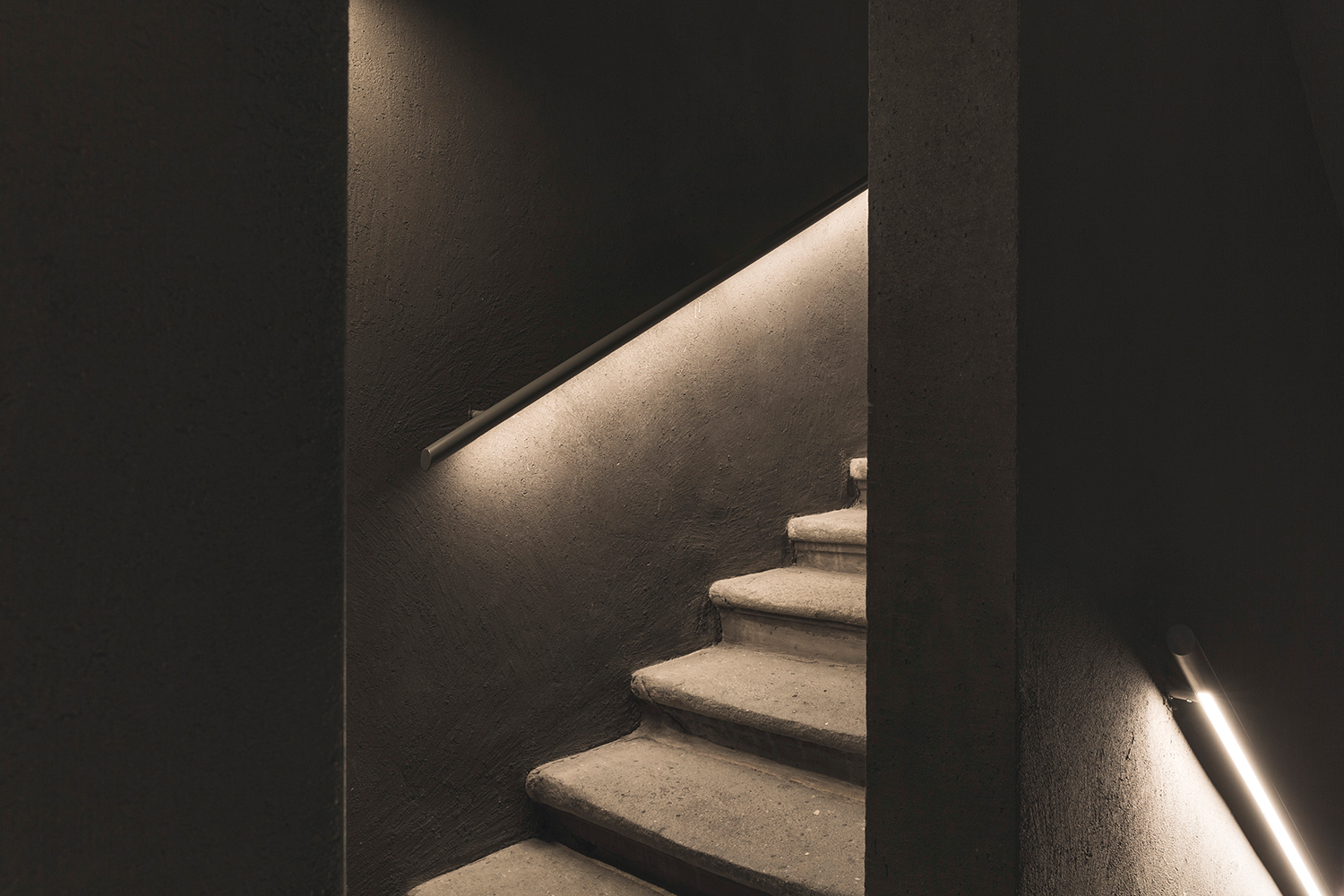 A full-height sliding glass panel, conceived as a sort of large curtain, separates the room from the bathroom area. The traveler is reflected in his room, projecting himself in a scenario where he is the main actor.

The bathrooms, made of marble, have different shades of white. They also have spacious walk-in showers with a relaxing rain shower jet spray.

In front of the windows, the sliding linen panels gently filter the light and allow you to focus your sight on the street below.

The rooms are also enriched with modern technologies that include personalized light control, air conditioning, Wi-fi and HD televisions to offer an accommodation with all types of comforts. 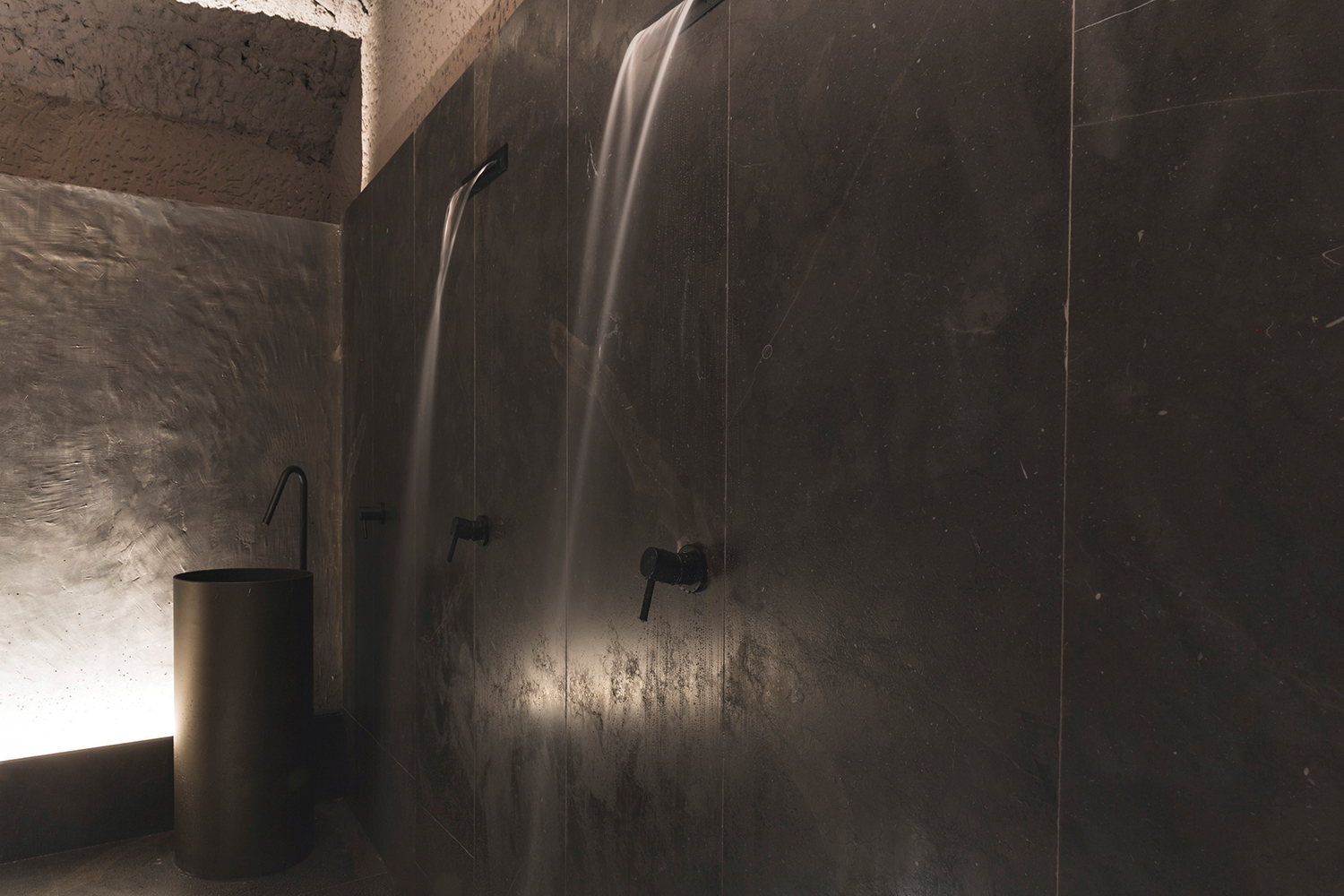 A soft light welcomes guests of the boutique hotel inside the Spa located on the lowest floor of the structure. The glass spaces characterize the welcoming interiors of the sauna and hammam. Complete with a sensory shower, the Hotel Scenario’s spa immerses visitors in a pleasant moment of relaxation, a wellness experience that is not to be missed. 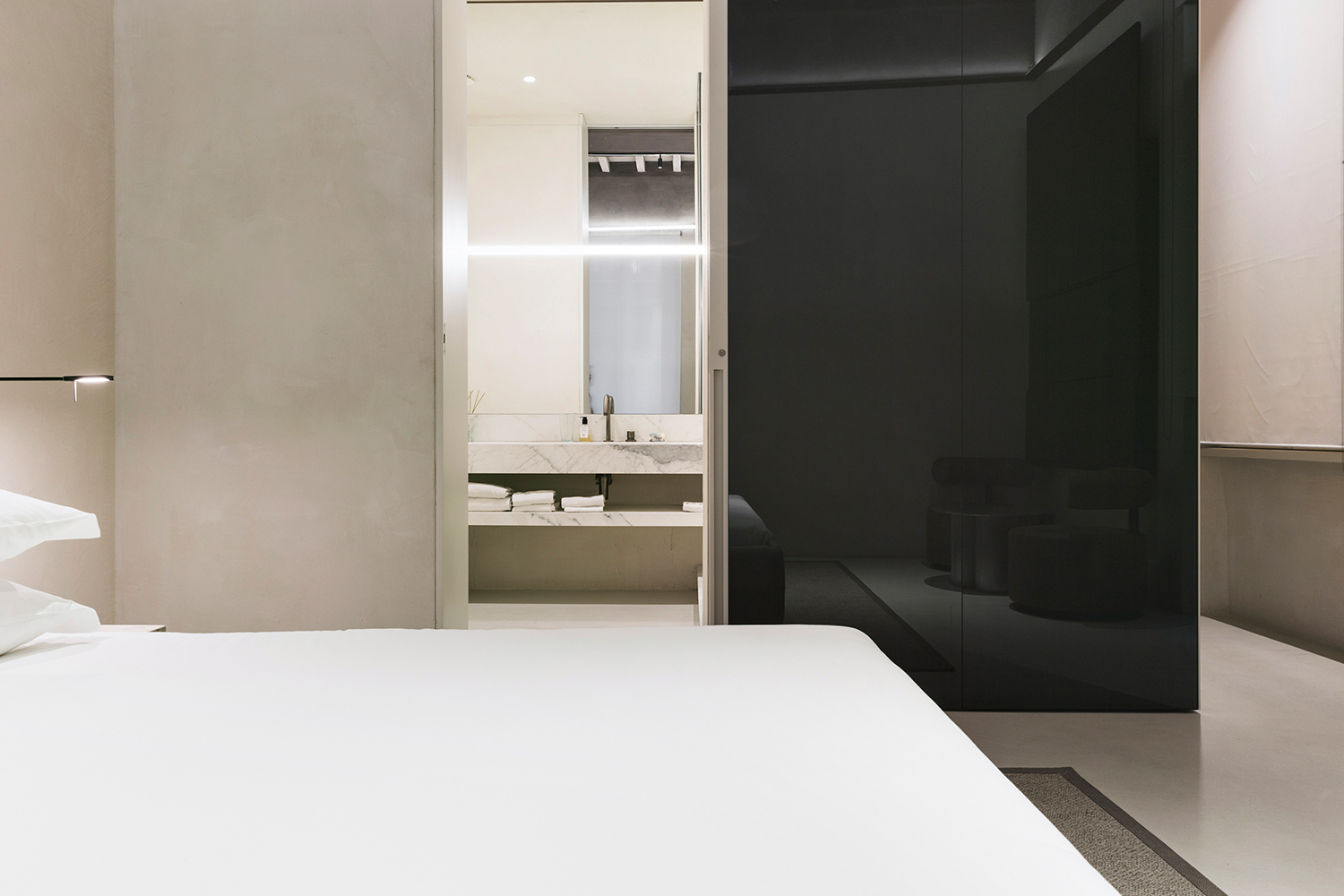 At number 26 of the small street of Vicolo delle Ceste, an ancient wooden door allows access to the Hotel Scenario. Once through the door, travelers enter the lobby and into the reception, both characterized by soft lights and dark colors that catapult the traveler into a Caravaggio-like atmosphere between past and present. A large stone staircase leads to the rooms and opens onto a central courtyard. The steps of the staircase consumed by the numerous passages of its ancient inhabitants, remind customers of the passing of time. 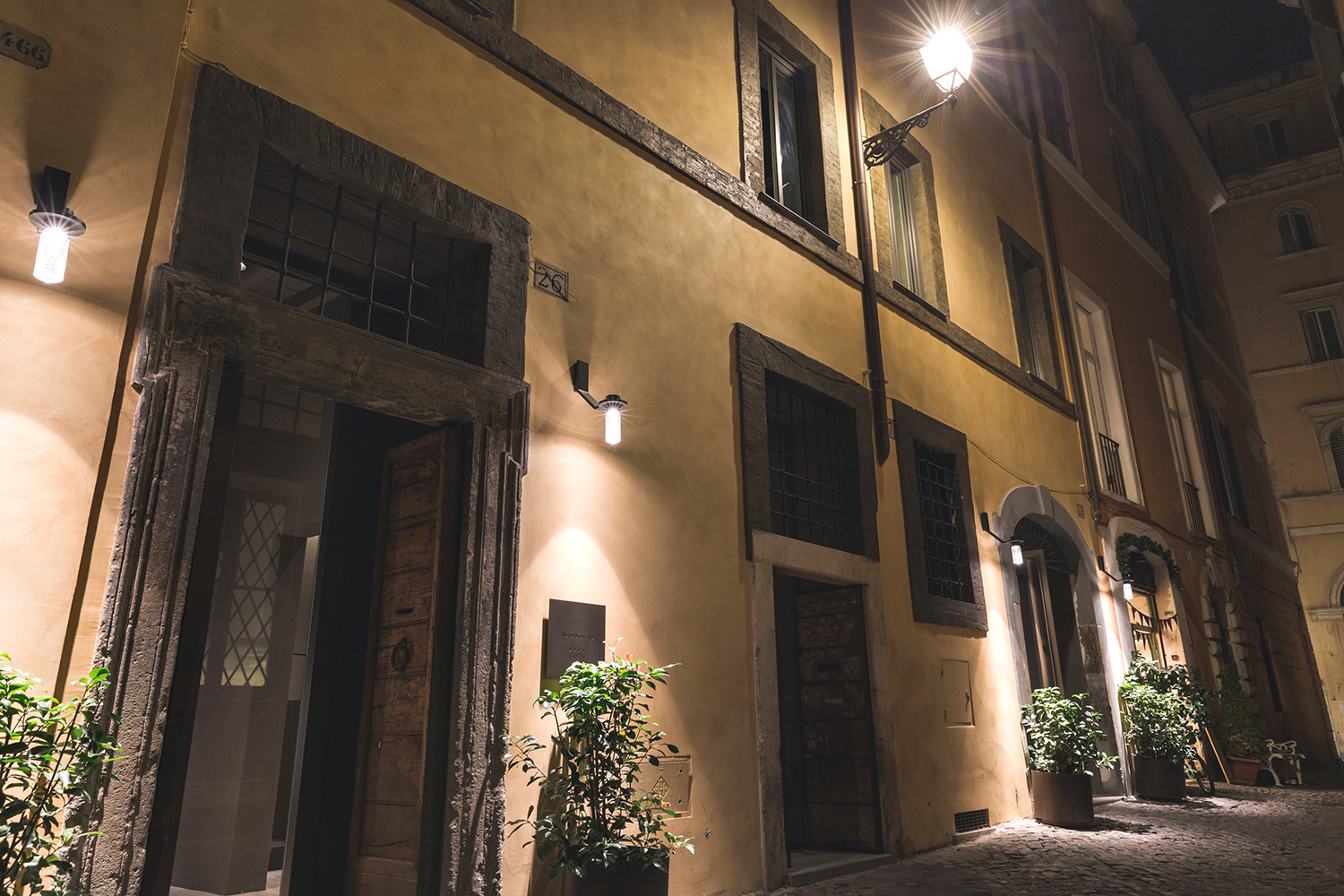 From the ground floor you can access Scenario’s courtyard, which has been transformed into a cozy and small space through which you enter the Archivolto restaurant. It is here that chef Giorgio Baldari receives his guests in what were once the stables of the palace. The rough walls and high wooden ceilings recall the past, while the contrast with the black wood, the steel furniture and a long reflective glass arch, welcomes the customers of the restaurant in a current reality. Twenty seats, dedicated not only to the customers of the Hotel but also to all those who want to taste a cuisine with authentic flavors in the center of Rome. 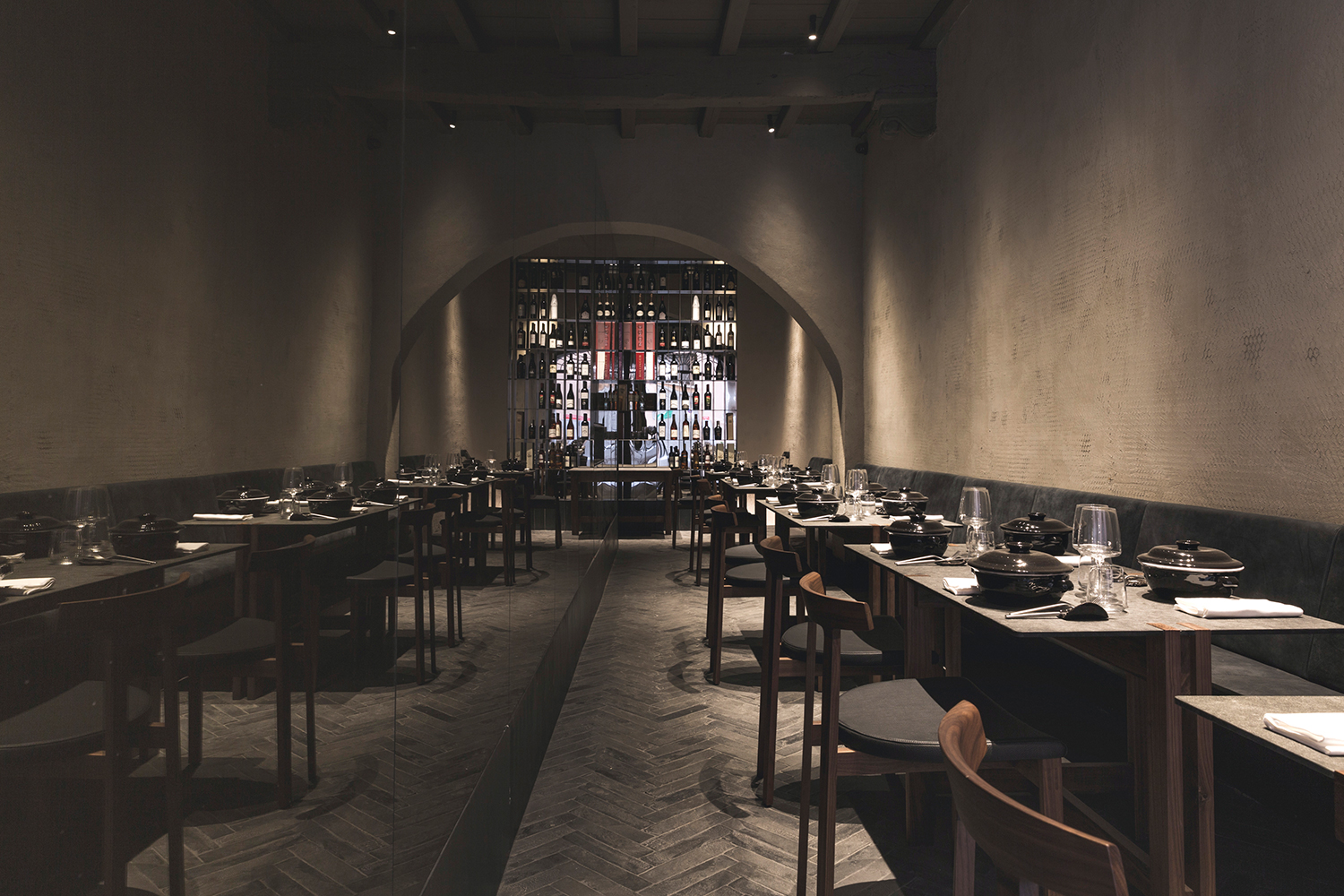 Hotel Scenario’s gem is the rooftop terrace that will be officially inaugurated in the spring of 2020. The terrace overlooks the roofs of the surrounding buildings and is a space that offers ten seats that are all cared for in every detail. The rich Mediterranean vegetation surrounds the whole area, bringing the guests in a soothing green mood.