Wick Architecture & Design has teamed up with LAND Design Studio to design the authentic Baja ambiance of Loqui, a 1,346 s.f.  restaurant located in the Art District near downtown Los Angeles. Evocative of a handcrafted Mexican taqueria, the new restaurant is the second Loquia location in the Los Angeles area and the first to carry the newly branded aesthetic image of the family-owned business.

“The first location in Culver City has always been a very ‘mom and pop’ style space, so the owners approached us about designing a second location that would be more forward in terms of executing a concept,” says David Wick, principal and lead designer of Wick Architecture & Design. “The original location has earned a lot of street credit, but the new location captures the essence of the business and provides Loqui with an aesthetic branding.” 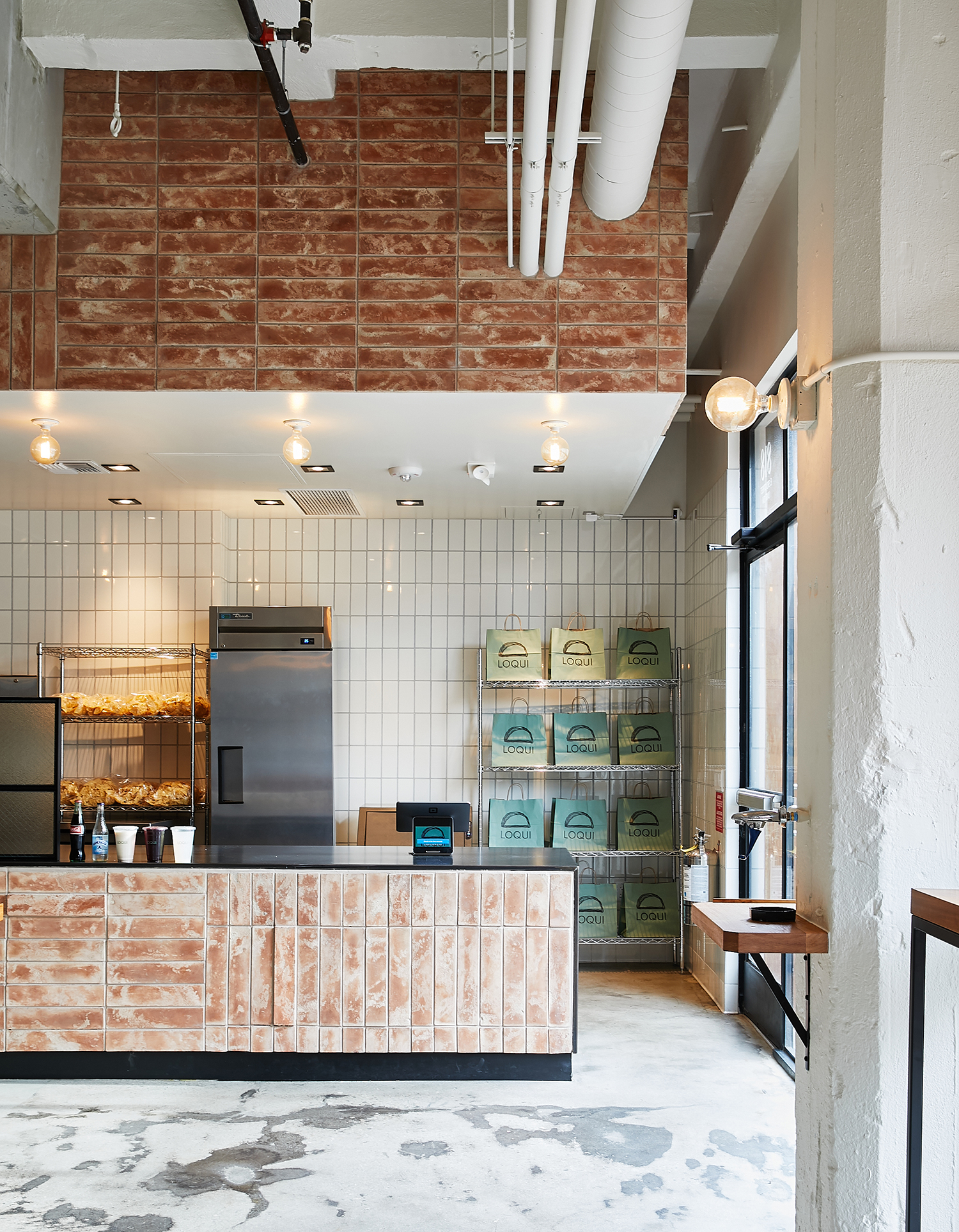 Situated in a gentrified industrial area of the city, the new Loqui space occupies a portion of the ground floor of an old four-storey concrete building that has been converted for office space, restaurants, and bars. With Loqui as the first tenant, the building provided Wick and Lindley with a blank canvas to work with. The designers inherited concrete floors and ceilings, as well as exposed pipes housing vertical plumbing and mechanical systems for the entire building. They went to great lengths to clean up any unsightly aesthetics by removing some redundant components and strategically erecting walls to conceal others, while maintaining some of the original elements, including the concrete floor, that appears organized and purposeful.

With an outer shell carefully carved out, the design team embarked on a plan to replicate some of the materials and visual elements of a typical handcrafted Mexican structure. The focus was on building something rustic that wasn’t ‘overthought or overwrought’, resulting in material selections that could be found on a construction site, including terracotta brick, stained oak, olive stucco, and patinated steel. 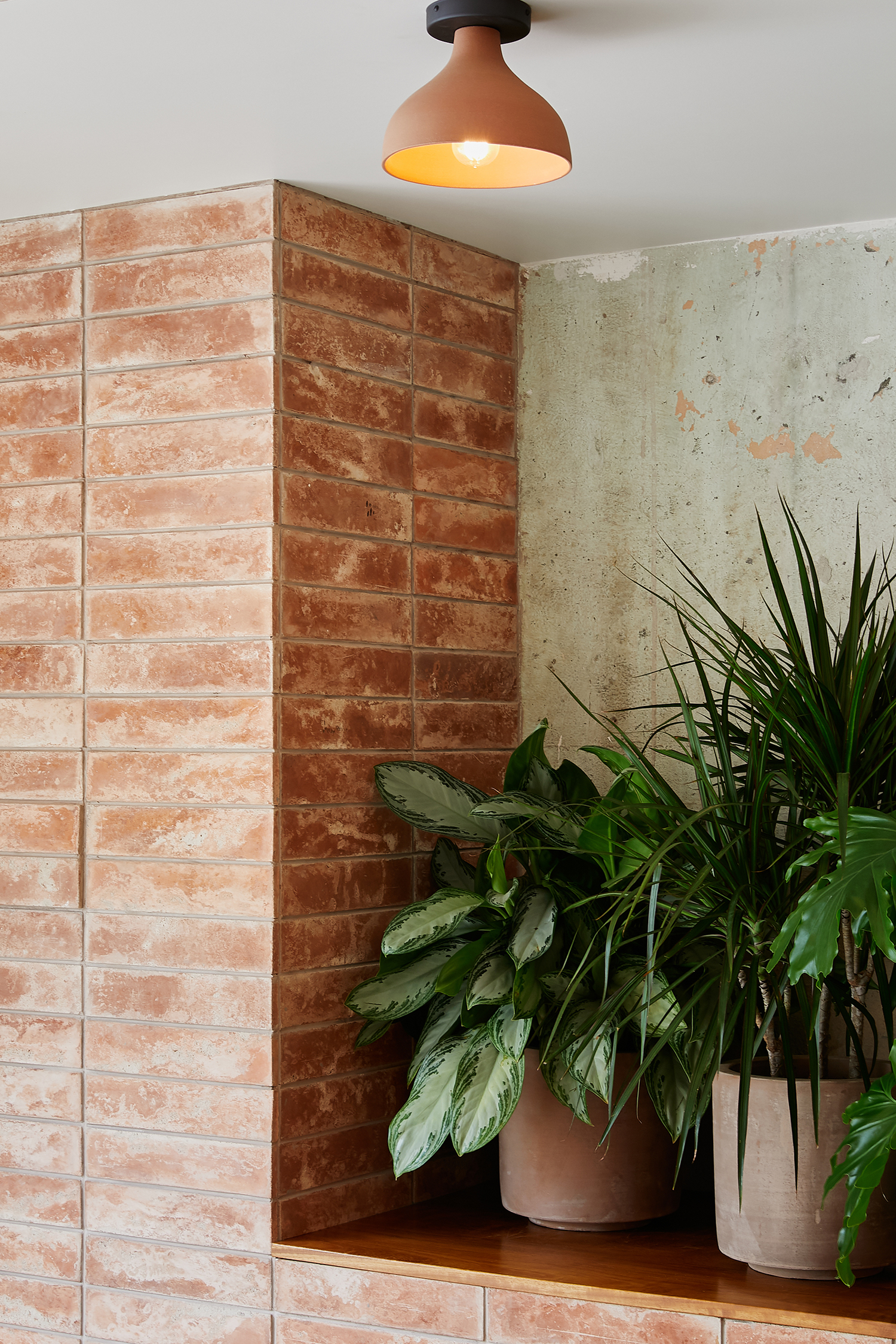 In approaching the design and connectivity of a kitchen, a service line, a small dining room, and a patio in a recessed rear courtyard, Wick and Lindley established continuity by utilizing terracotta bricks throughout the space. Simple vertical and horizontal Cartesian patterns, with periodic embossed bricks, seamlessly wrap the walls, seating, and outdoor area in a defining and unified ambiance.

“Upon entry, the brick encapsulates three sides, including the service line and kitchen, the portal to the restrooms, and the dining area,” explains Andrew Lindley, principal and lead designer of LAND Design Studio. “The abundant use of the terracotta bricks reflects our desire to use a simple material that would tie the whole space together and capture and extend the essence and mood throughout.” 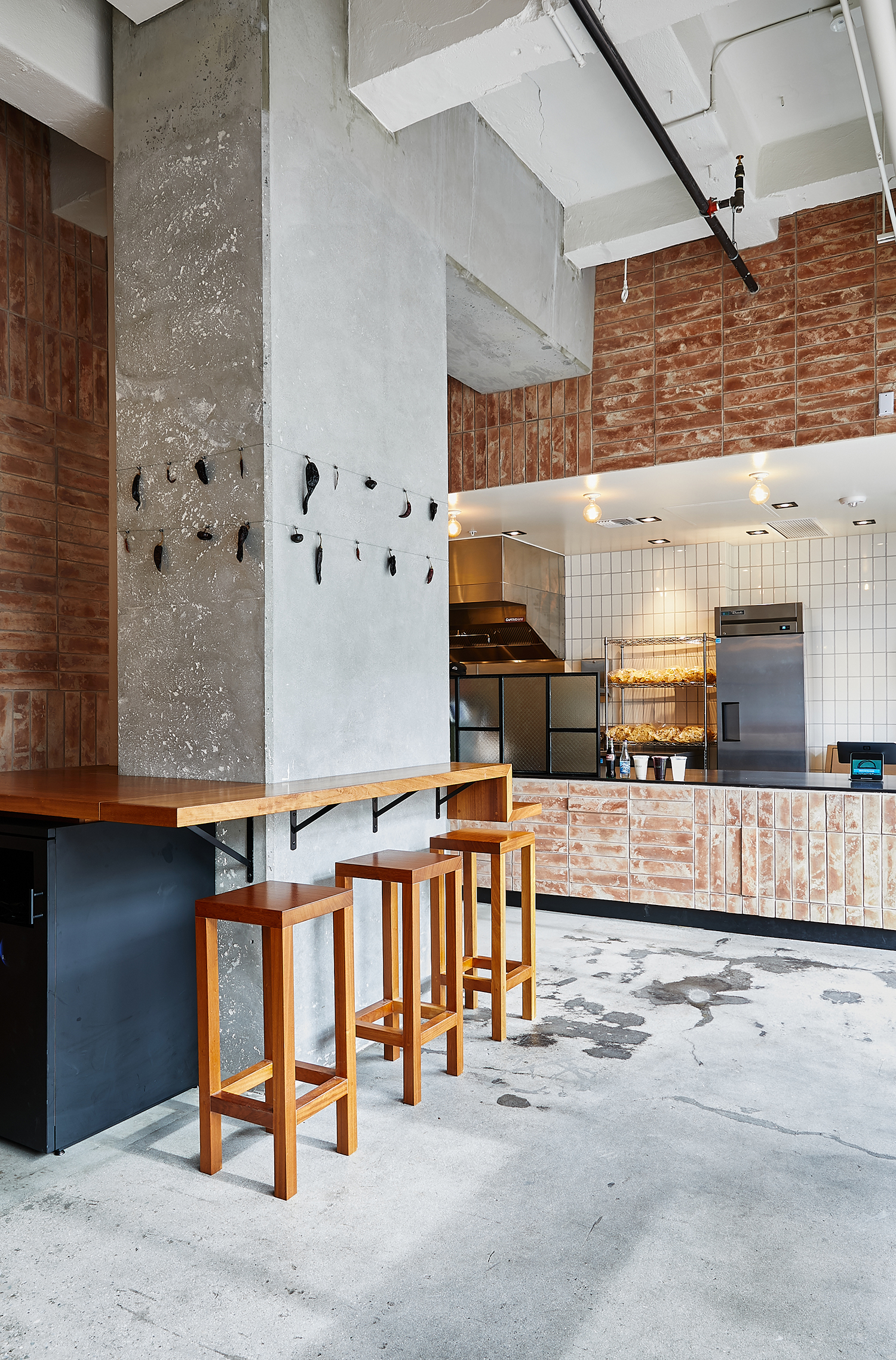 Beyond the use of terracotta, the material palette for giving the Loqui design a handcrafted look includes a restroom corridor finished in olive green stucco, as well as a kitchen backdrop featuring tiles with subtle blue trim. To bring it all to life, the design team chose FOLK Abigail small soft cone semi-flush lighting from Rejuvenation to add warmth and character to the internal space.

“One of the things that we wanted to avoid was the clinical feel that kitchen areas often project in small restaurant spaces like this,” adds Lindley. “We decided to use Shadow Edge tiles from Wink Design Source, and the blue edges definitely soften the aesthetics.” 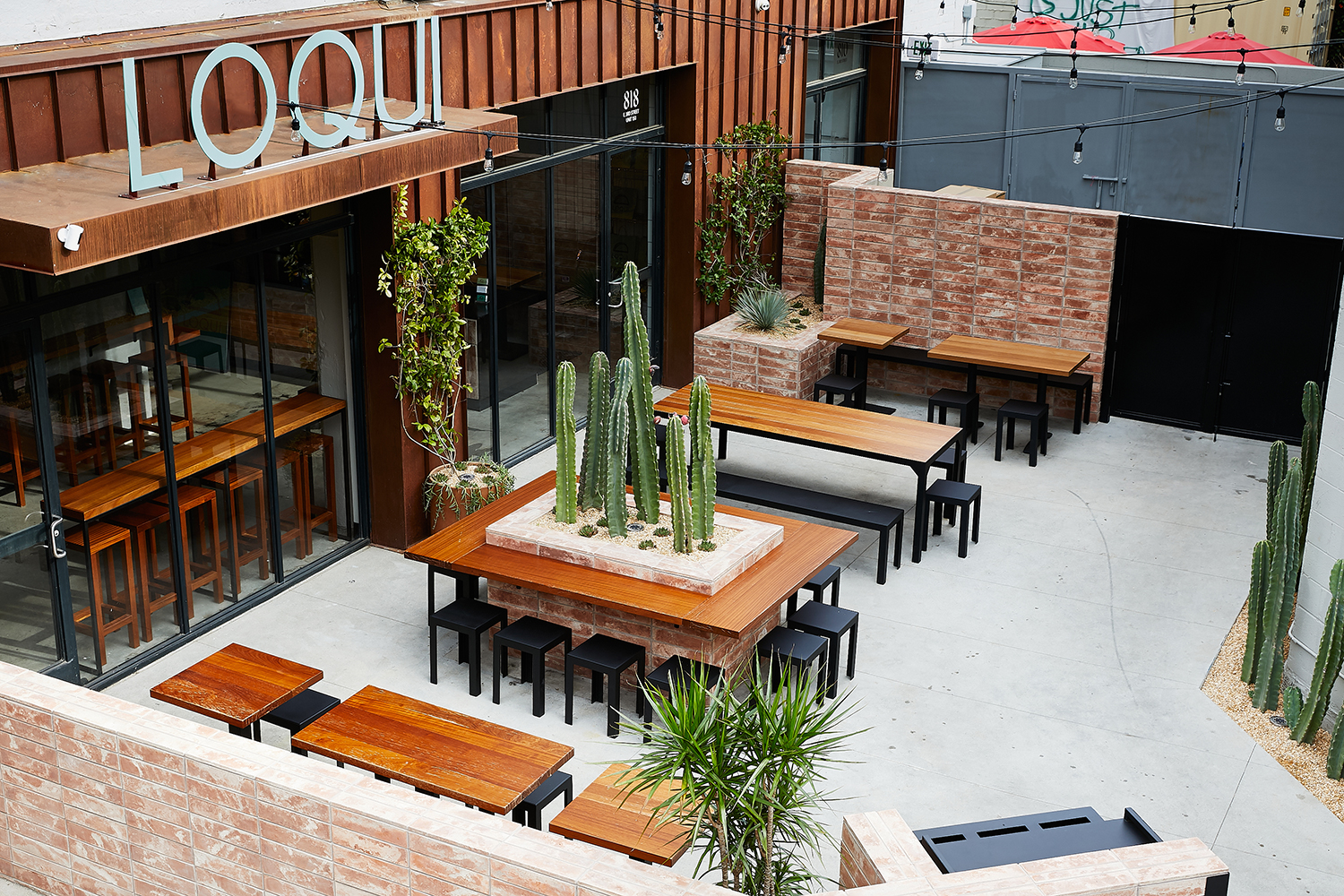 Although located at the rear of the building, the outdoor patio serves as the restaurant’s main entrance. That presented Wick and Lindley with the challenge of turning a back alley courtyard into an appealing gateway for Loqui, while establishing the vibe of a year-round Southern California setting. Equal in proportion to the indoor dining area, Loqui’s outdoor space is an extension of the interior, with a natural flow and continuity courtesy of erected terracotta brick walls that define the space. Stained oak panelling frames the building façade, while black painted patina metal, with natural texturing, forms edges around the terracotta barrier walls. 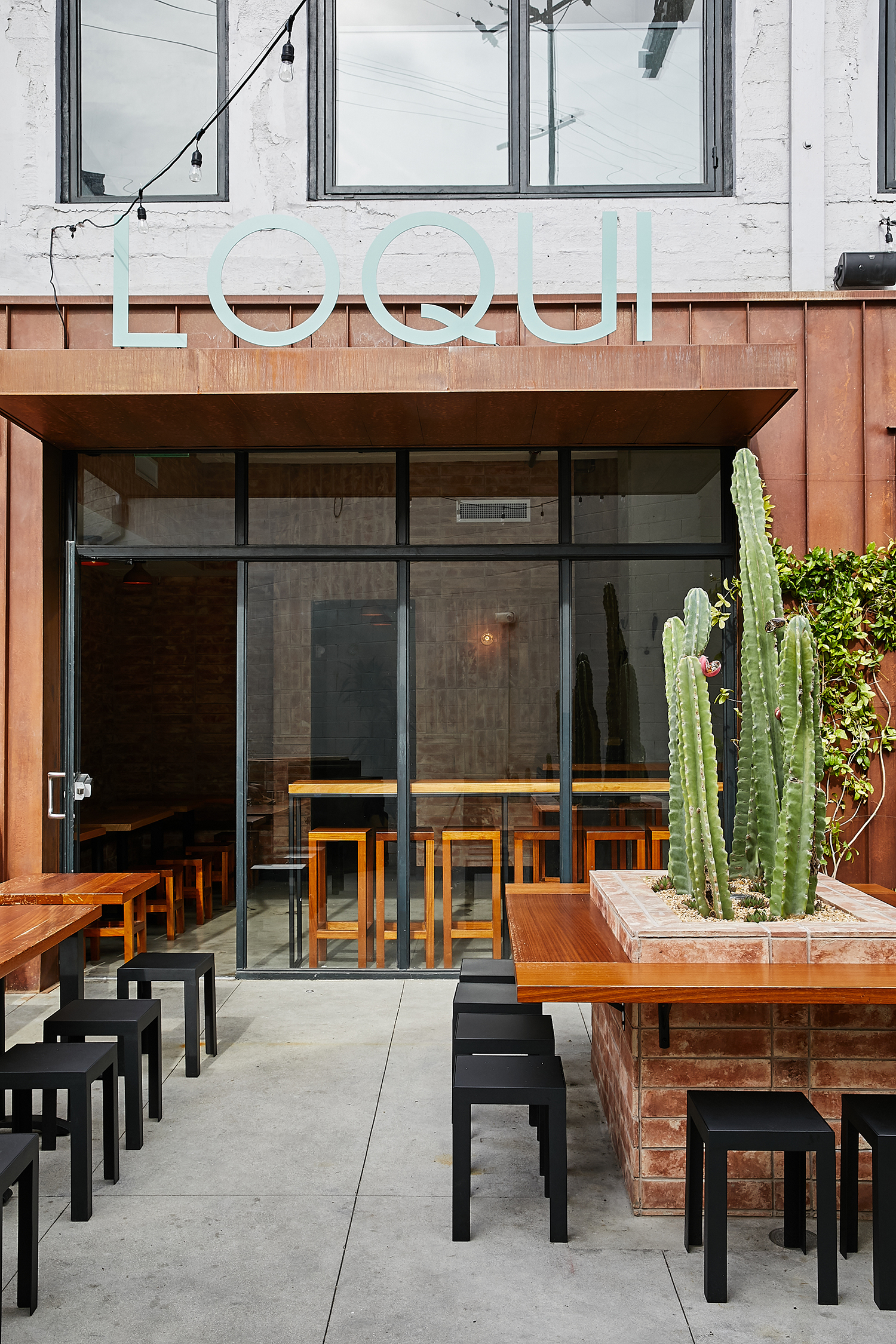 Finally, Wick and Lindley brought in landscapers to provide the courtyard space with an abundance of neatly groomed cacti and other vegetation in order to complete the authentic Baja look and feel.

“Every project for us begins with sitting down with the client to discuss their needs, and then proposing visually stunning solutions that will help them to achieve their goals,” explains David Wick. “We adapt every project to the challenges at hand, and Loqui is a perfect example of our versatile creativity.”