Designed by Torafu Architects, Freitag‘s new store in Kyoto is characterized by industrial aesthetics, which bring visitors closer to the original atmosphere of the company’s headquarters in Zurich.

For the uninitiated, Freitag is a brand selling colorful messenger bags and accessories made from recycled truck tarpaulins, bicycle inner tubes, and used car seat belts. 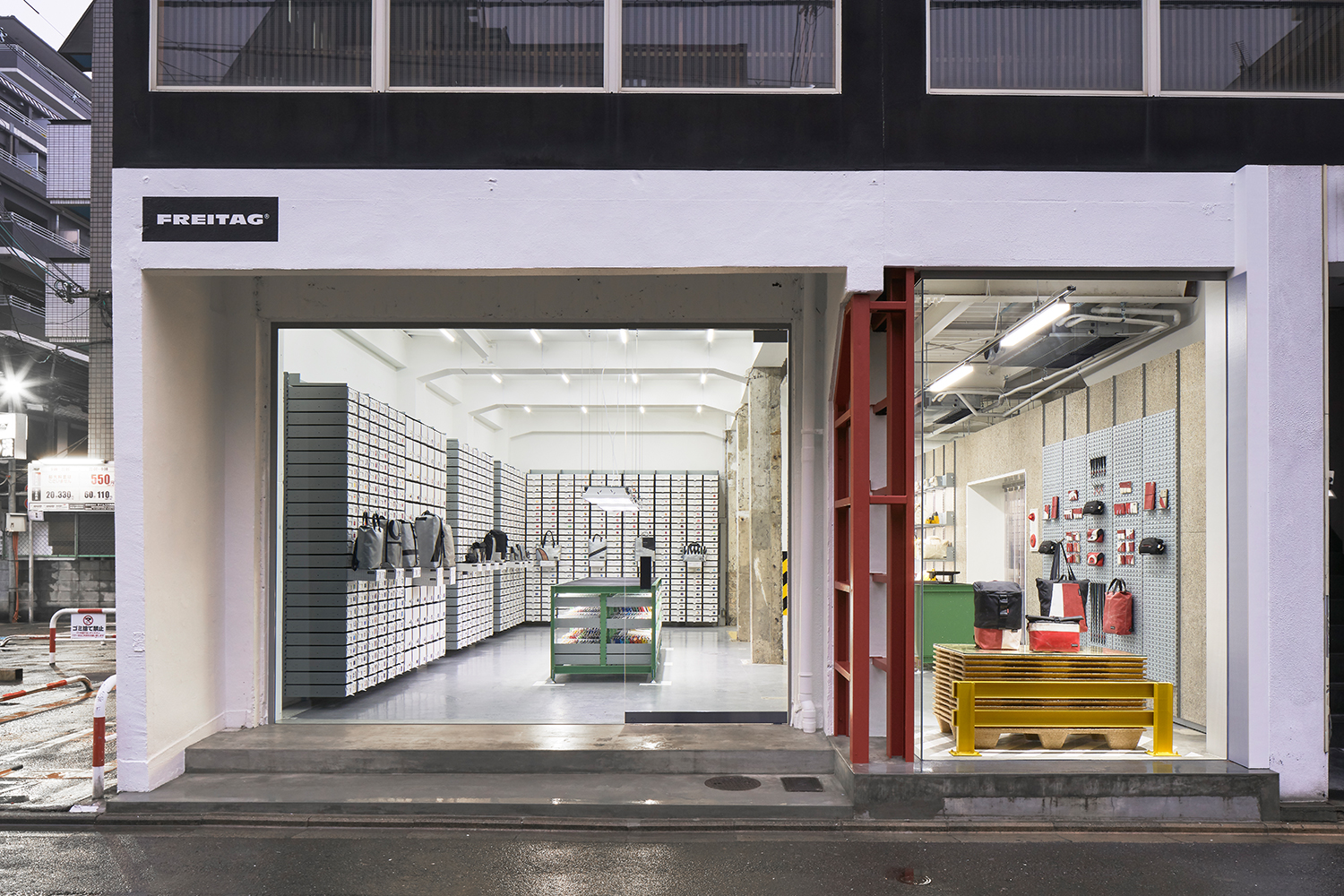 At the start of this project, the first floor of the building was renovated. It has been originally two buildings with different structures, and these were combined after removing the exterior wall. The existing spandrel wall and shutter were removed, so that the glass facade opens fully toward the storefront and enhances the connection between the street and inside. 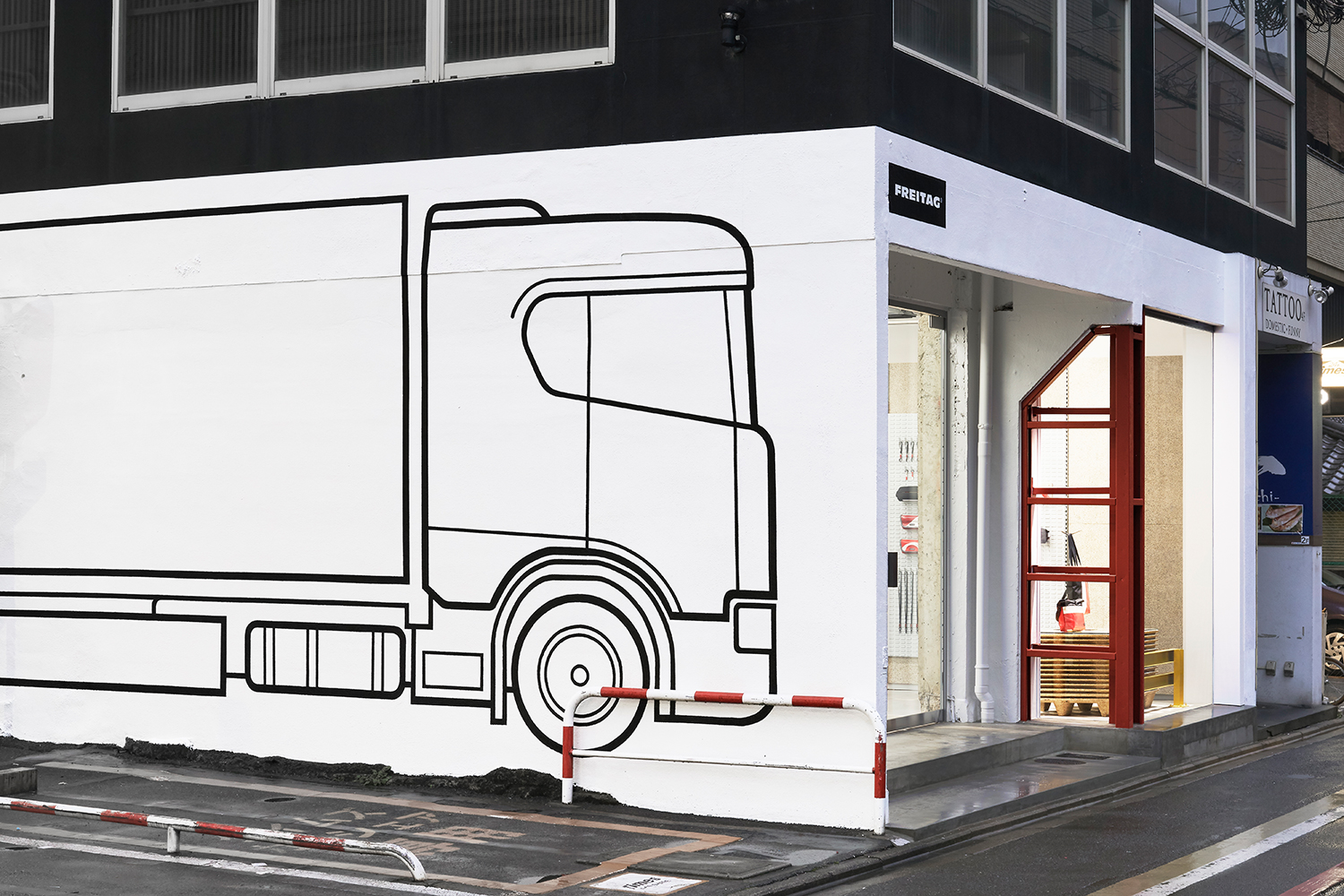 The island fixtures, such as a large workbench type with rubber top and V100, Freitag’s original system, define a clean reinforced concrete space constructed with rough columns and beams. The pendant light delivers enough even light which is diffused by reflectors to the top of the island fixtures, where items can be examined thoroughly. 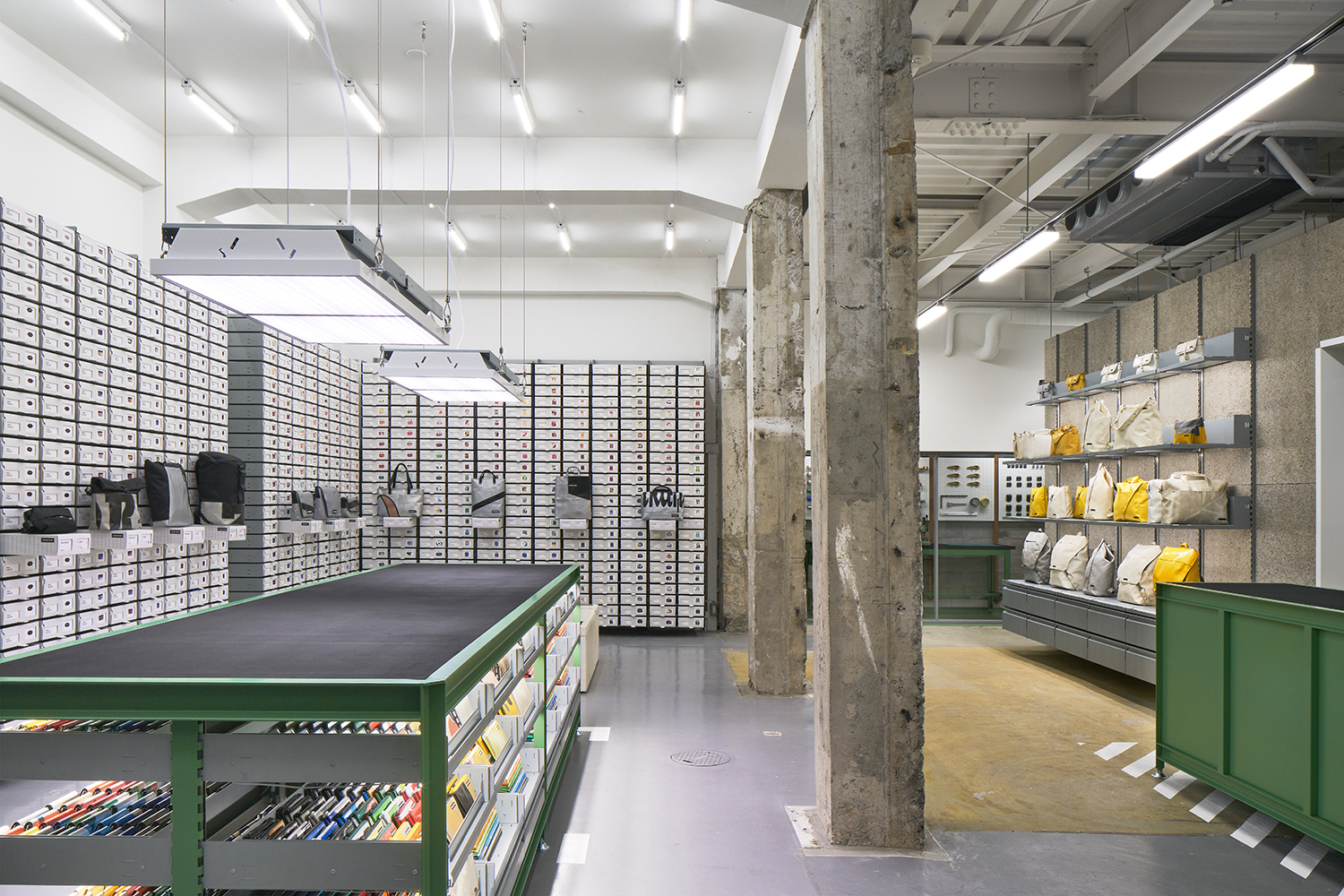 Some functions such as a stockroom and a POS counter are located in the steel structure section with a semi-outdoor workspace. The first DIY workstation in Japan installed in the workspace provides opportunities to make original items. The system fixture fixed on the stockroom wall covered with the wood wool cement board enables multiple patterns of visual display for the items. 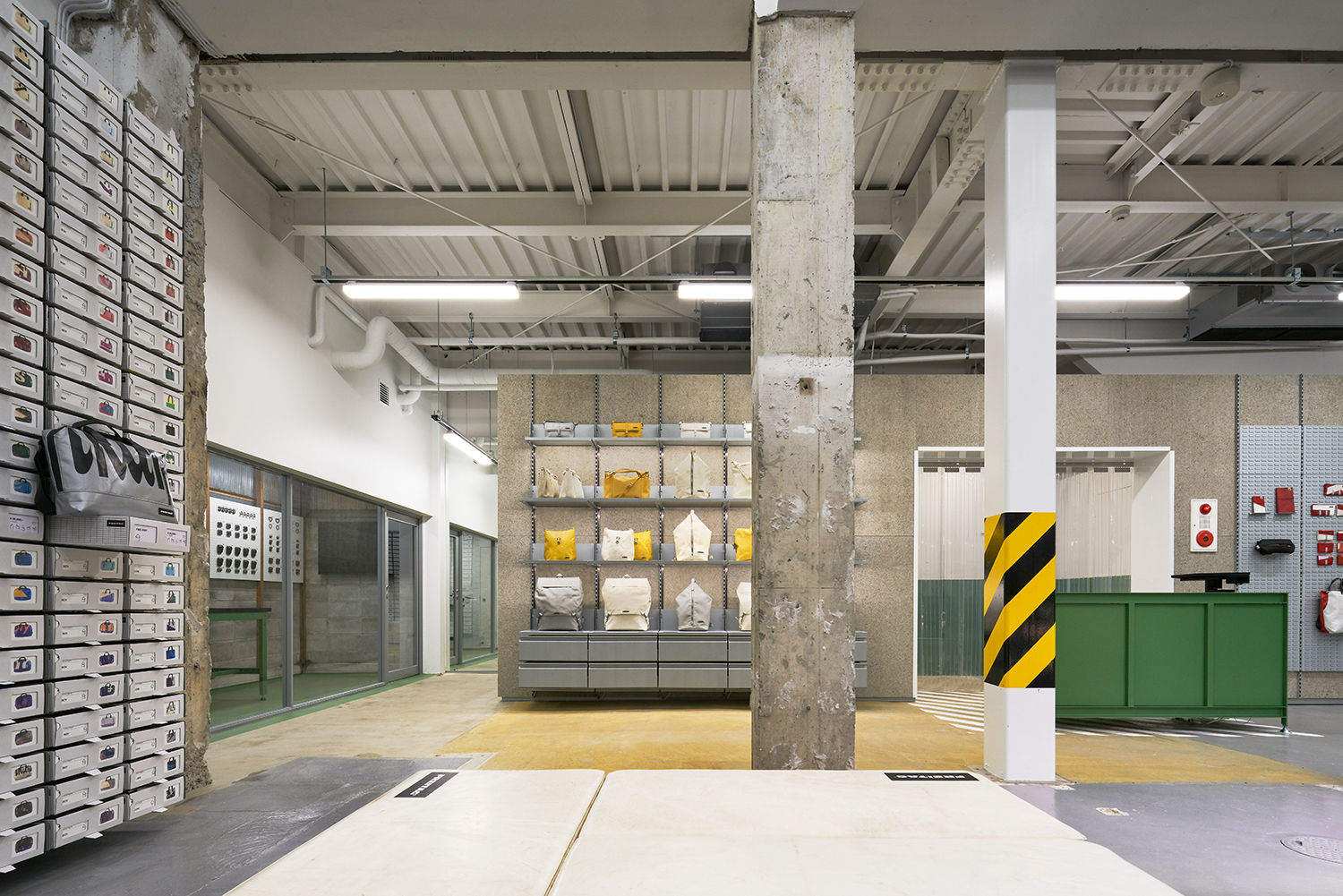 The full-sized truck running on a highway, drawn on the wall facing the parking lot, symbolizes the store image as an industrial distribution center in Zurich, Freitag’s base. “Through interpreting the conflict between two different structures to the distinct advantages of the existing building, we aimed to create the space representing Freitag’s creativity,” explains Torafu Architects. 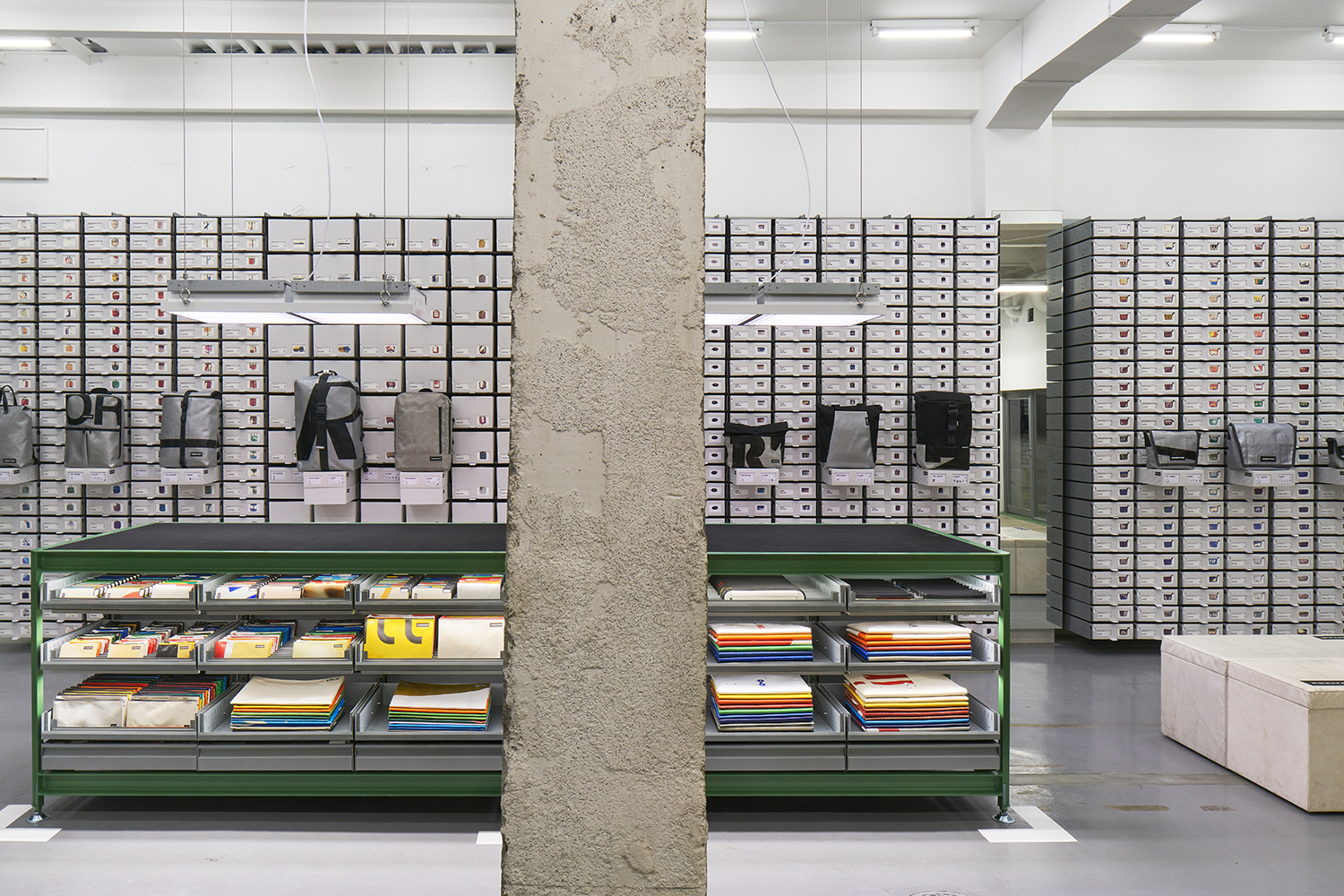 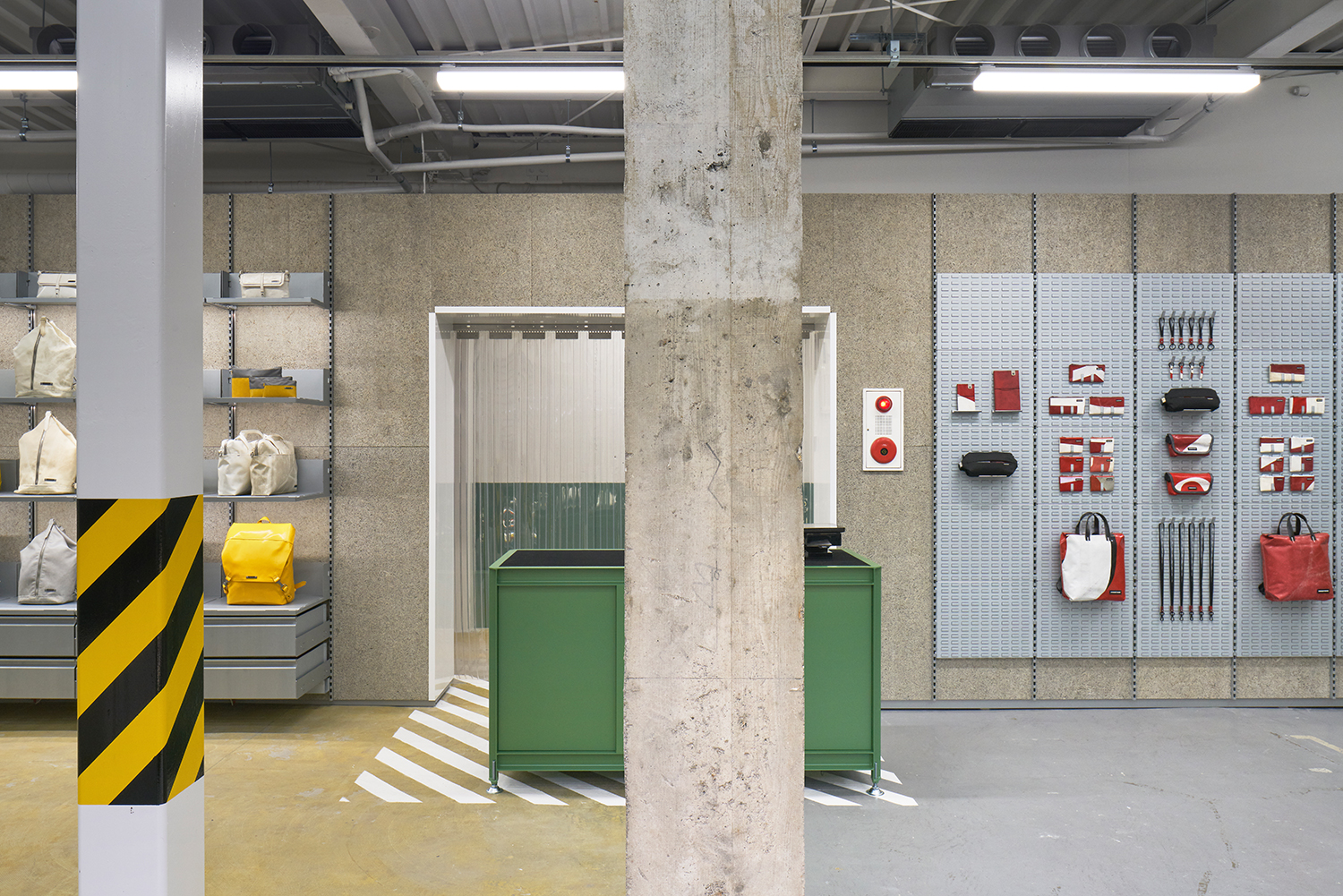 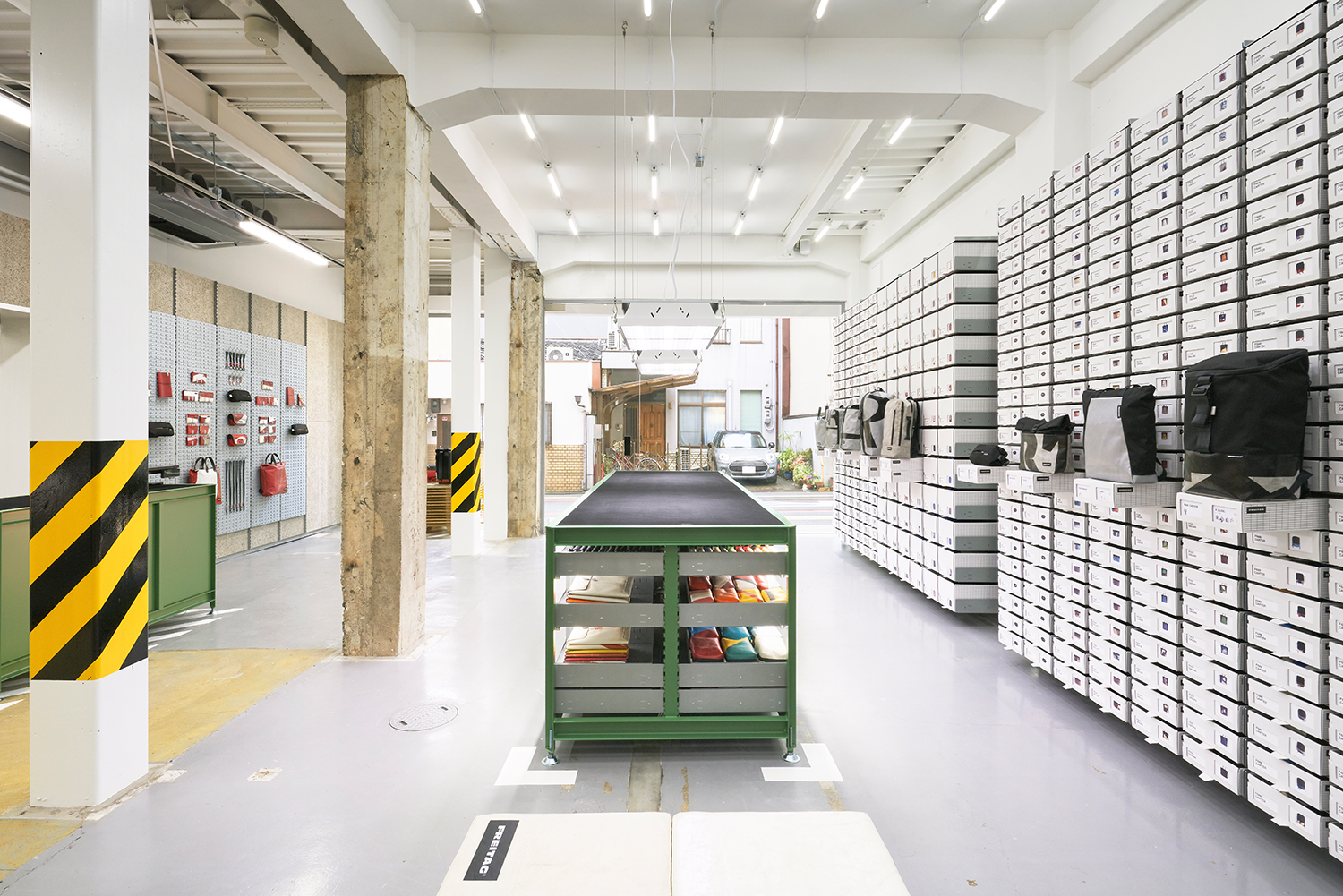 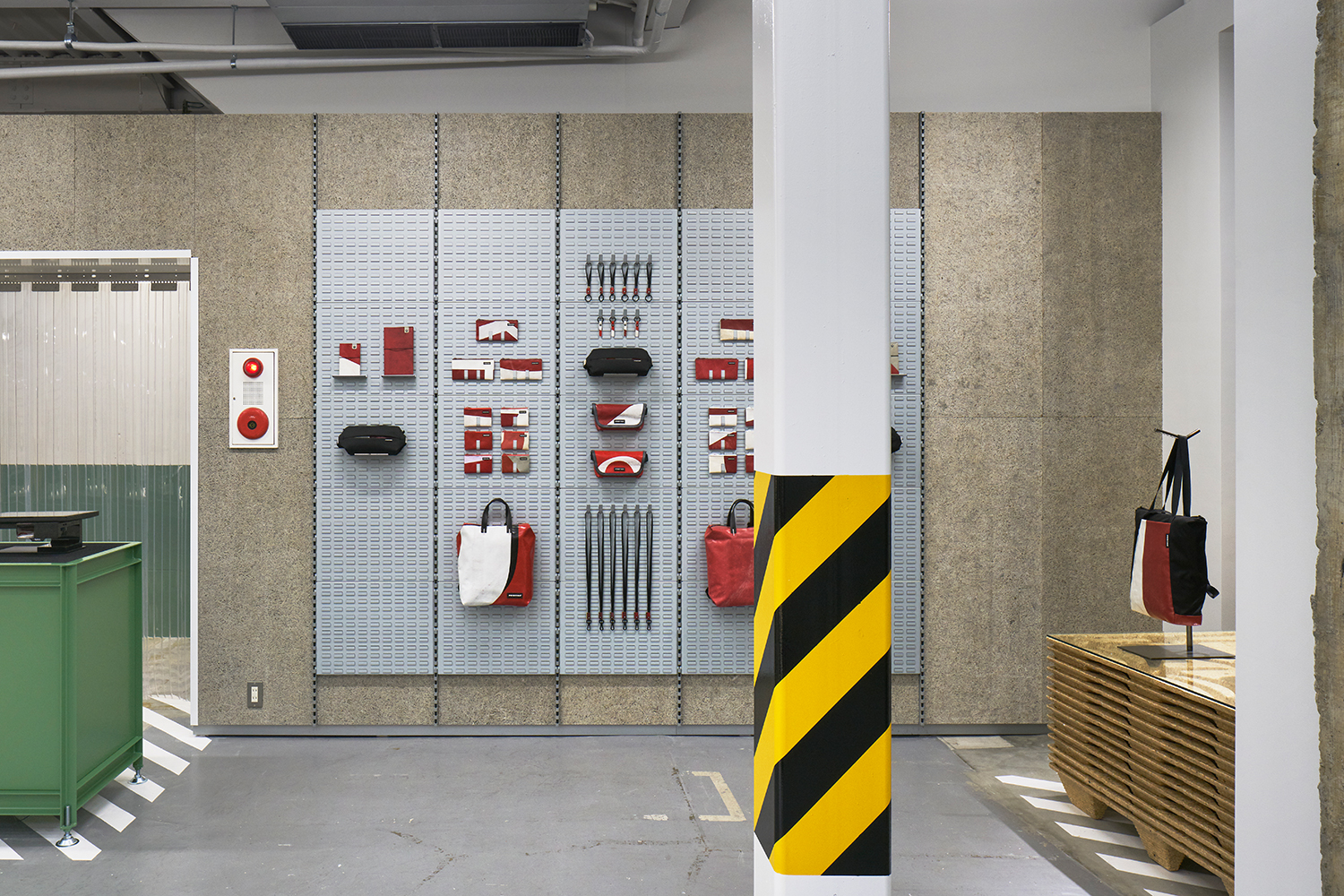 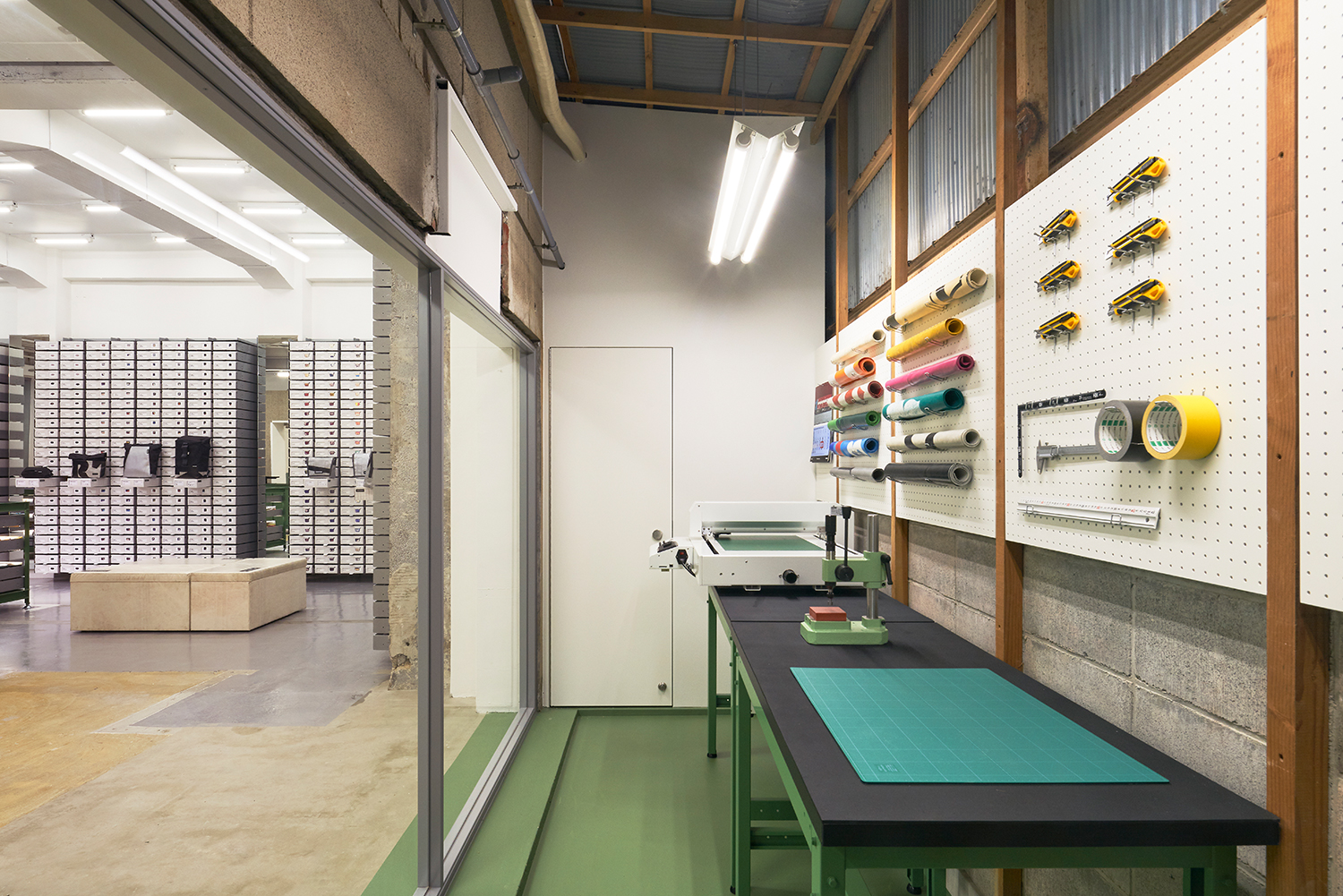 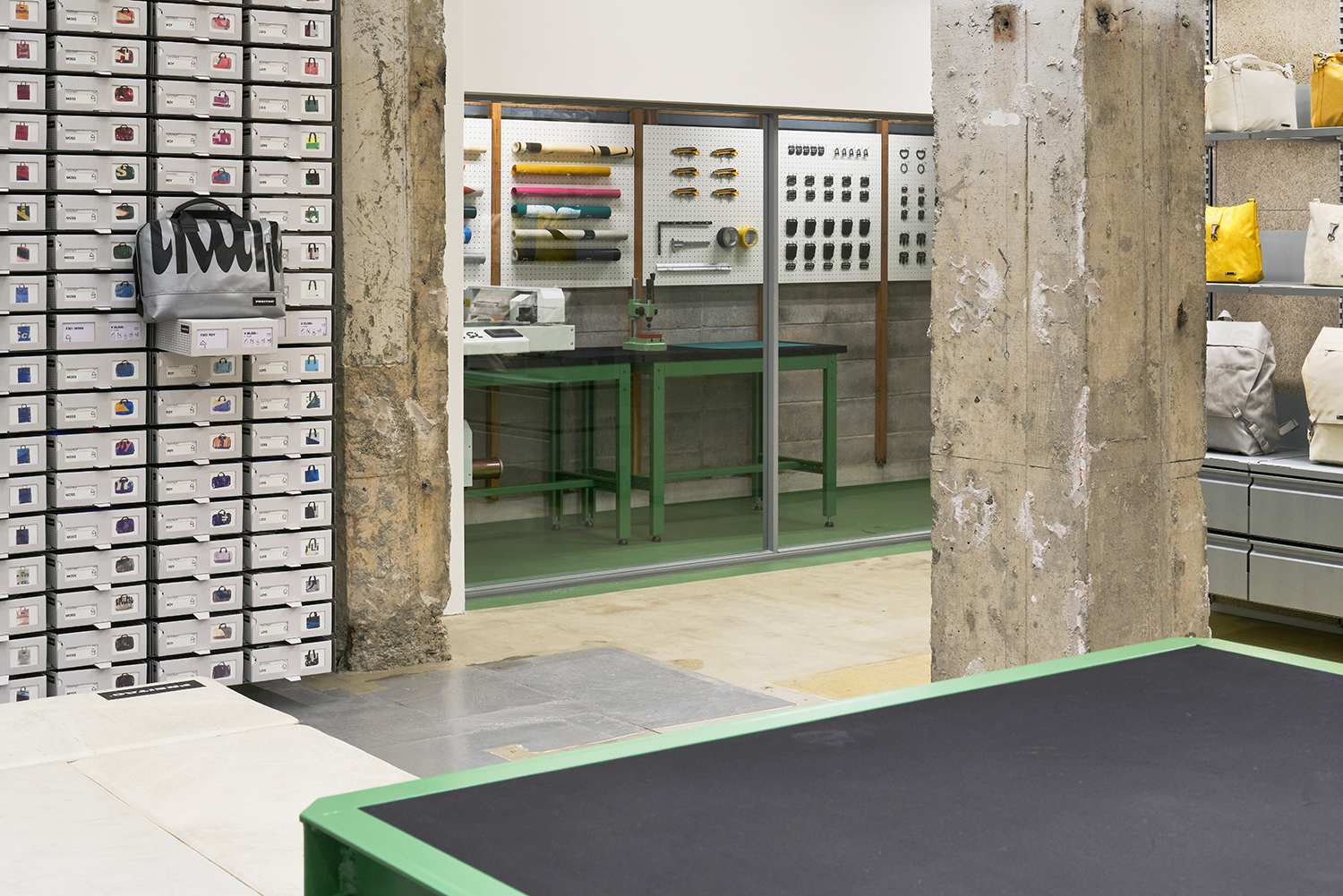 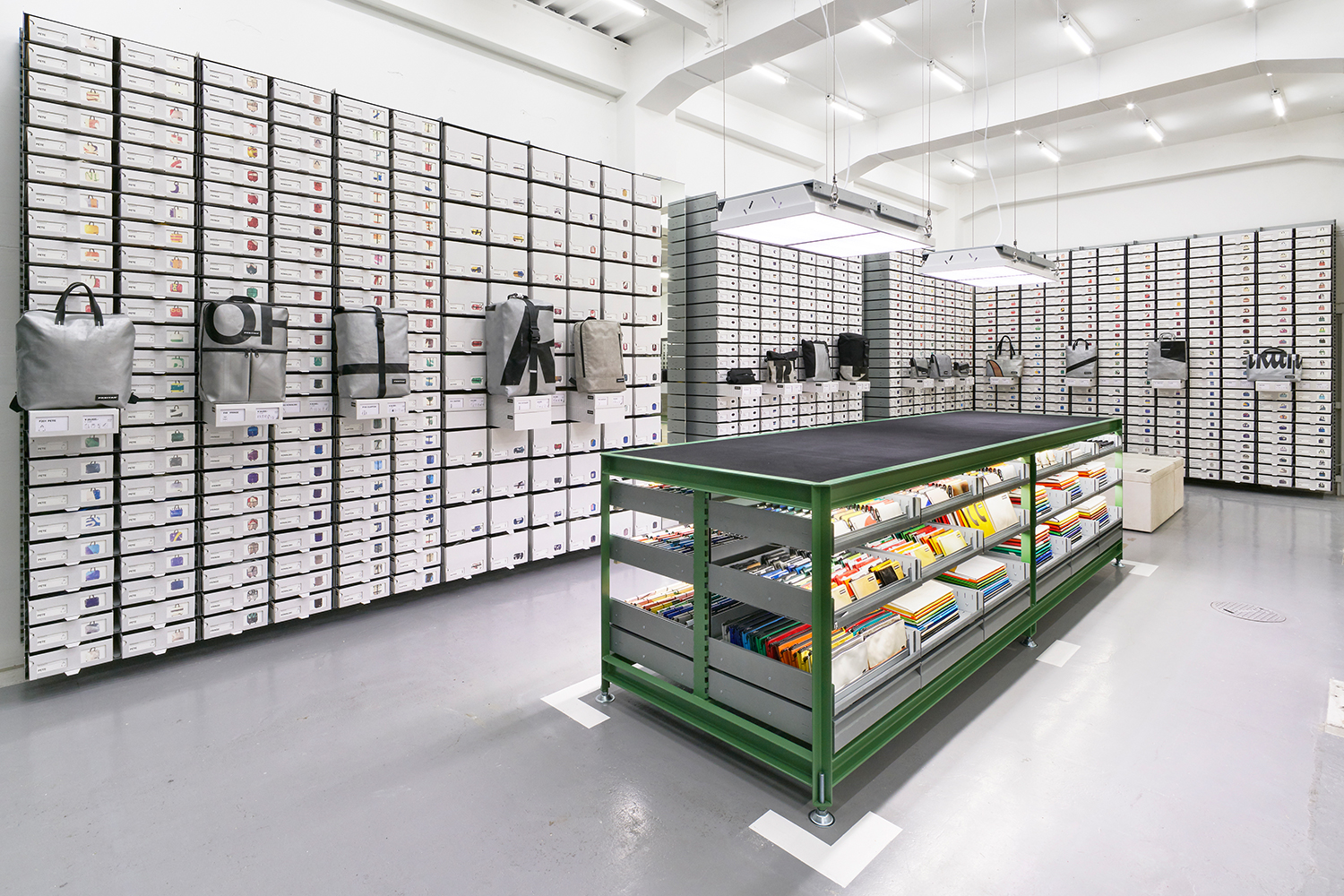