As part of the extensive refurbishment project of Hotel Kardial in Banja Vrućica, Bosnia and Herzegovina, Slovenian architectural firm Enota has designed a new wellness facility, which comprises interior and exterior pools, sauna and massage parlors.

Banja Vrućica is a destination with a long and successful tradition of medical tourism. In order to accommodate the change in the guests’ habits and requirements, there has lately been a clear tendency for the development of wellness and congress tourism, which is most evident in the health resort’s flagship, Hotel Kardial. The extension and overhaul of the bathing and wellness sections of the hotel is thus a logical next step in the complex’s gradual transformation in this direction.

Hotel Kardial has recently undergone extensive refurbishment. The overhaul reduced the size of the balconies in order to enlarge the hotel rooms, further rooms were added on the building’s roof, and all the accompanying programs were overhauled, namely the congress halls and the wellness facility. 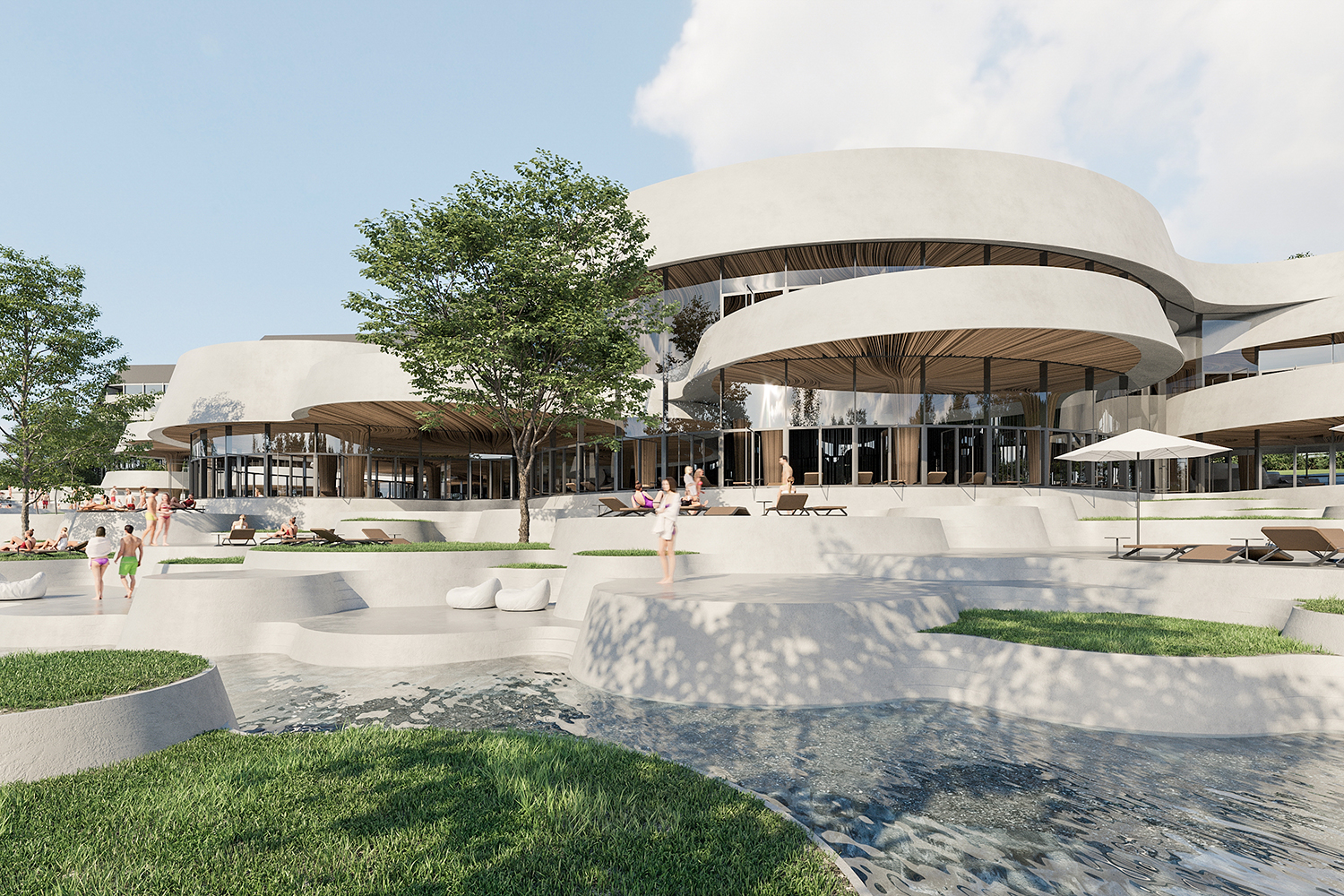 The final addition was an exterior pool platform with accompanying service spaces at the outside-guest entrance. The subsequent use of the refurbished building revealed that the interior pool section was too small and somewhat inconveniently placed above the exterior pool platform. This resulted in the sauna and massage parlors being located on the lower floor, which is to the detriment of optimal organization of the spaces and service.

The spaces in question also exhibit a number of technical issues stemming from the refurbishment. From the investment standpoint, it makes the most sense for these spaces to be removed and replaced with new ones, eliminating the current shortcomings, subject to appropriate planning. Notwithstanding the removal of the enclosed spaces, all the exterior spatial layout, i.e. the exterior pool and the service entrance facility, is to be retained. 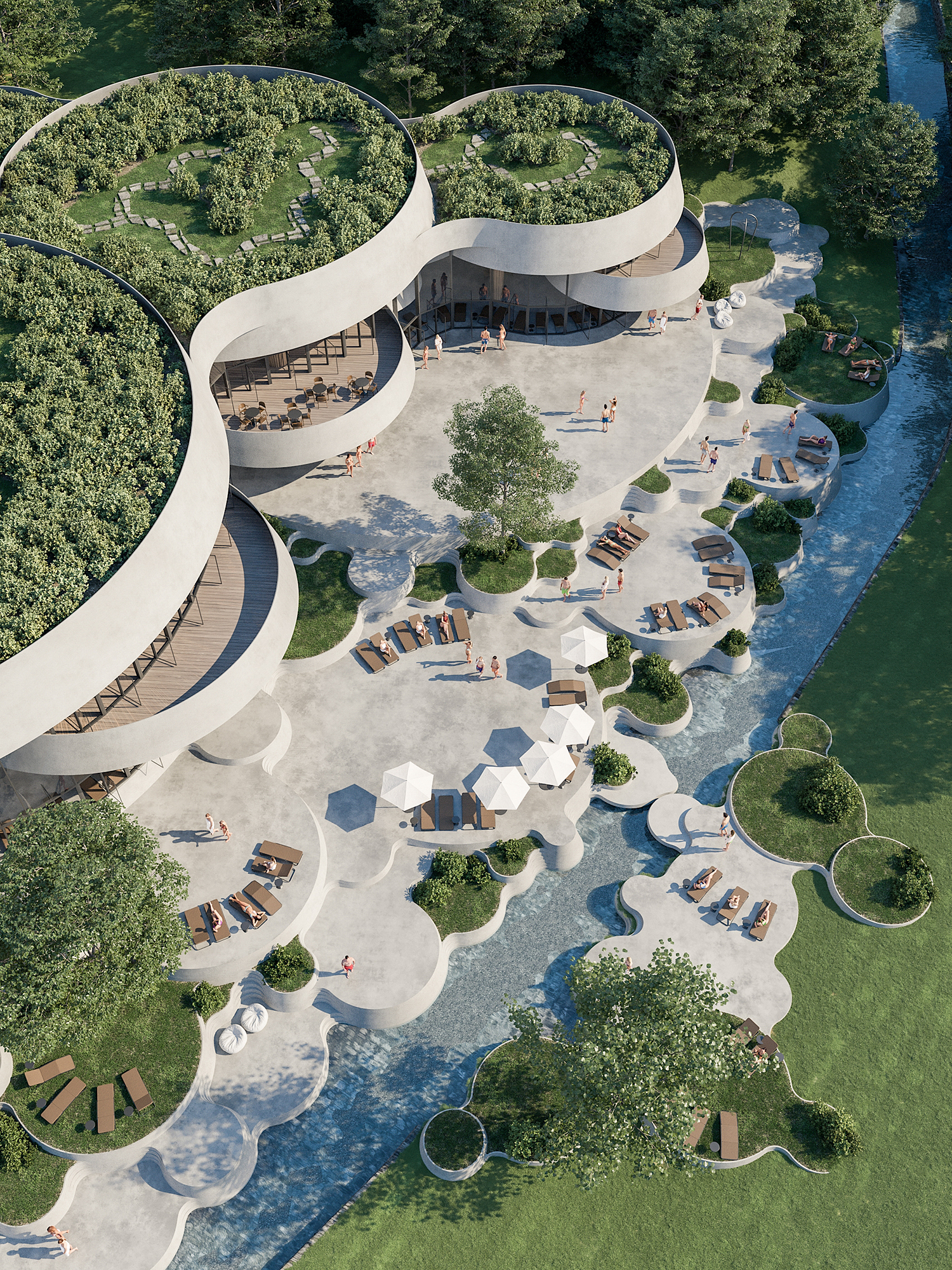 The visual design of the retained spaces is markedly organic, based on circular strokes. In order to achieve a homogenous final visual expression of the complex, this approach is applied as the starting point for further design of the envisaged buildings and exterior layout. The planned interventions therefore make no design distinction between the building and the exterior layout: all are to employ the same materials and design principles. This enables the congruity of the entire layout below the hotel entrance level with no alterations to the hotel above this grade. 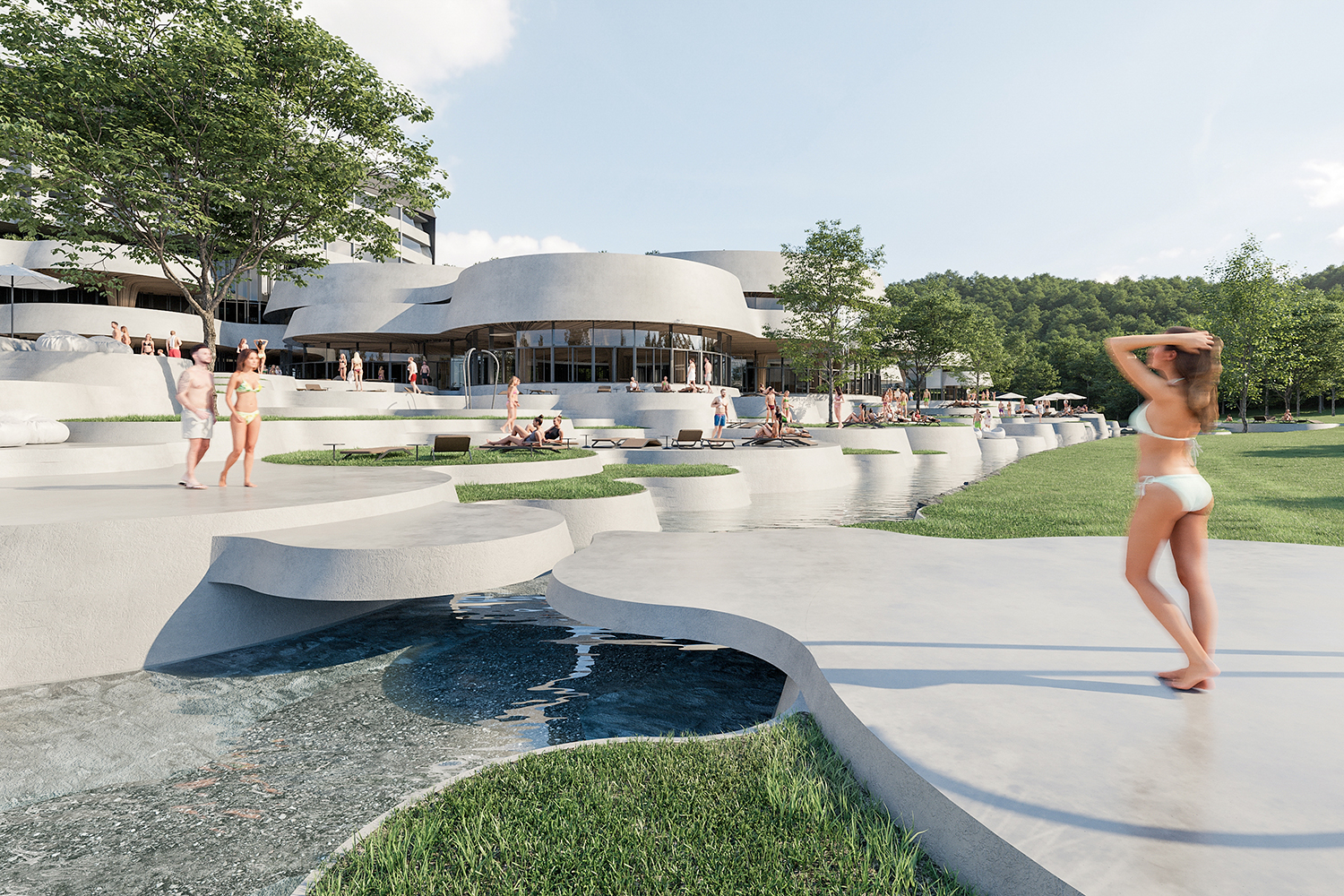 One of the key goals of the renovation is making the waterside of stream Jelića part of the exterior functional surfaces in order to provide a welcome content enhancement by means of the water element. At the same time, the inclusion of this surface allows for future expansion of wellness programmes on available plots on the other side of the stream. The uniform treatment of the space from the stream to the hotel’s ground level, which also encompasses the first two storeys of the pubic programme, together with the covering of the new pool section, perceptually diminishes the hotel building from seven to five floors. Using the ground level, the new terraced structure of the layout with overhanging roofing further reduces the appearance of the existing building and brings the entire layout closer to the human scale. 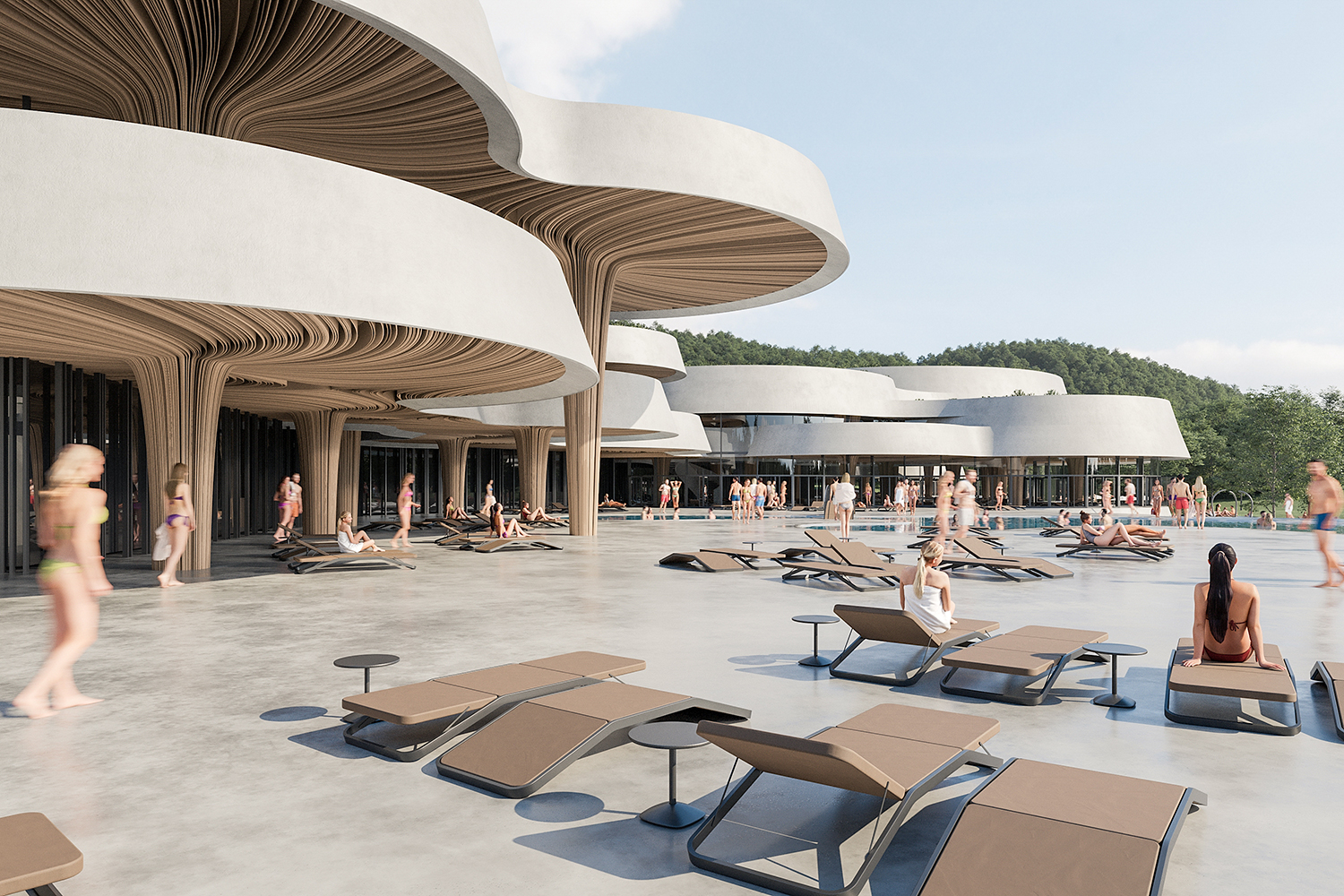 The individual terraces of the exterior layout and the roofs of the new buildings feature ample greenery, certainly a welcome characteristic of an environment where well-being is foremost dependent on nature. On the other hand, the green roofs bridge the gap to the ground level for room users as the view across the roofs continues unbroken to the ground floor layout and further afield to the natural landscape at the other side of the stream. 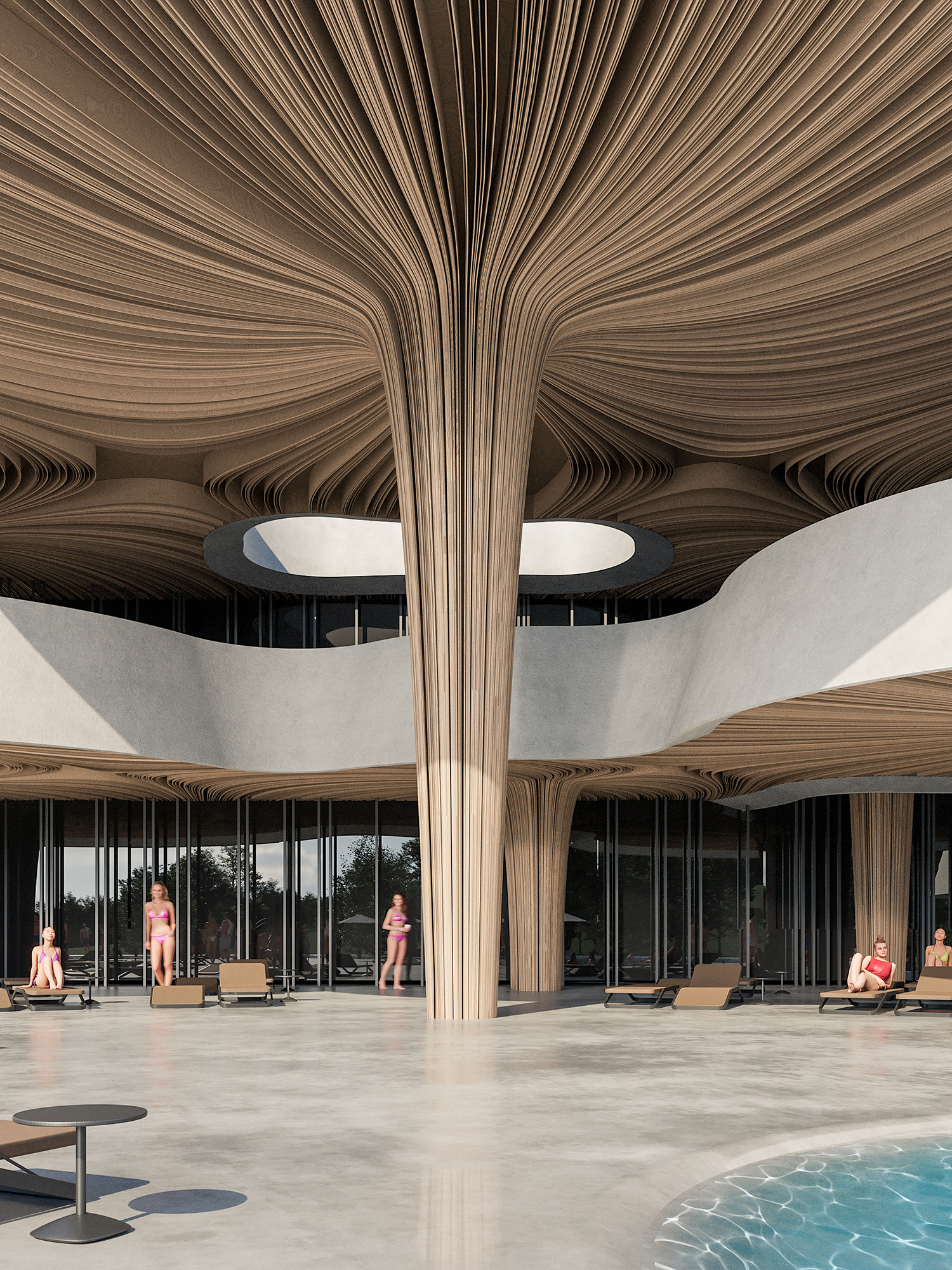 The new appended spaces are accessible through the new reception area, which connects to the existing underground corridor and the outside-guest entrance. Additionally, Hotel Kardial guests can take advantage of the direct access to the wellness program and the swimming pool locker room, which also serves as the gateway to the new sauna parlors. The swimming pool hall is divided into two different sections. The larger of the two is intended for families and connects to the existing external pool on the same level with additional pertaining surfaces being placed on the gallery floor above the pool. The other, smaller section is located above the pool on the primary – gallery level where the saunas and associated programs are also found. This part of the facility boasts its own separate exterior surfaces and is intended for more demanding guests. 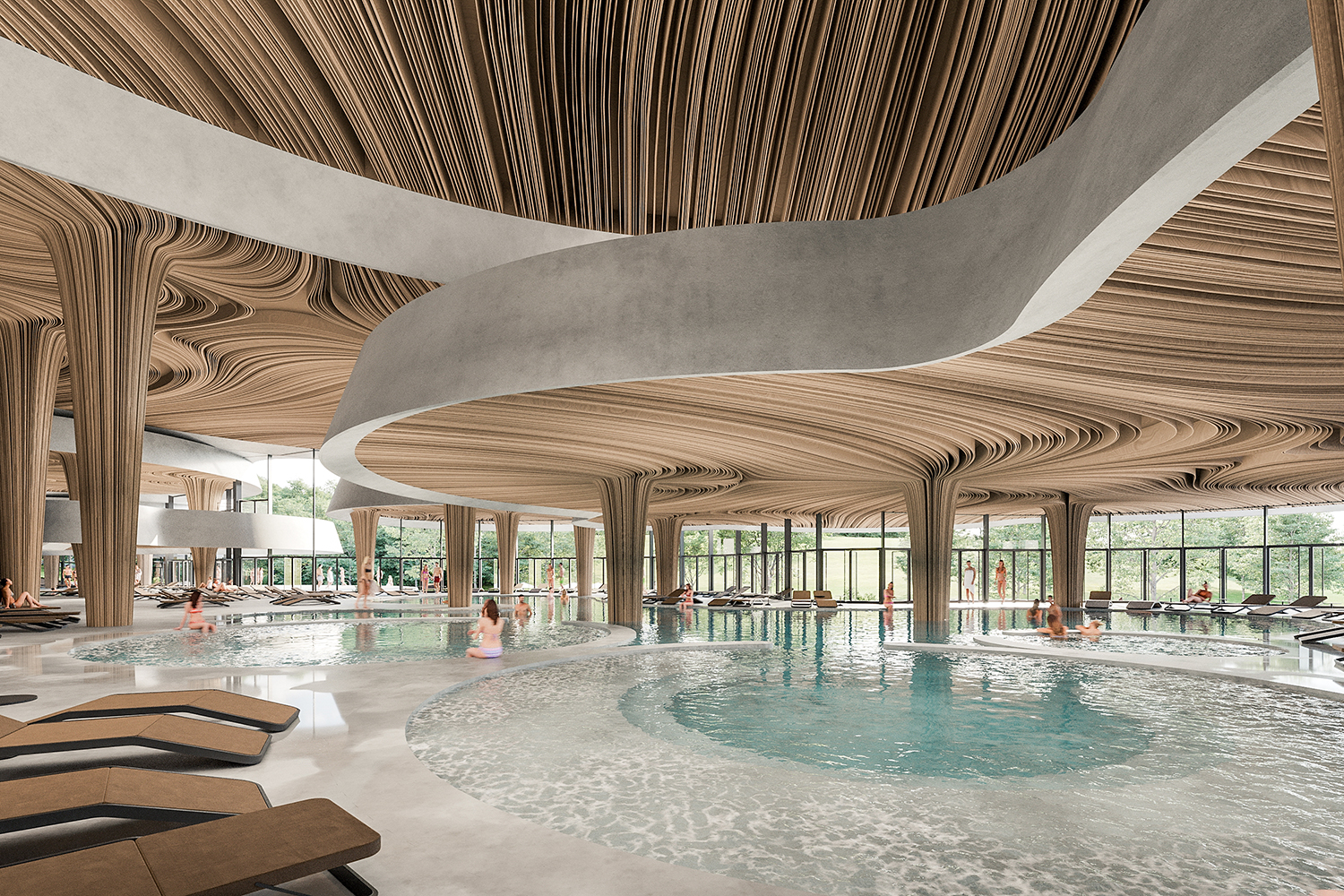 The fundamental guideline for the design of the new building’s interior was to produce a sensation of constant connection to the external, natural landscape. The main load-bearing structure of the individual roof elements has thus been shifted into the building’s interior. The perimeter glass facade, which still features a secondary load-bearing structure, contiguously envelops the building and ensures uninterrupted contact with the surrounding landscape. In spring and in autumn, temperature-permitting, the entire glass perimeter may be opened in order to provide an even better connection between the interior and the exterior. 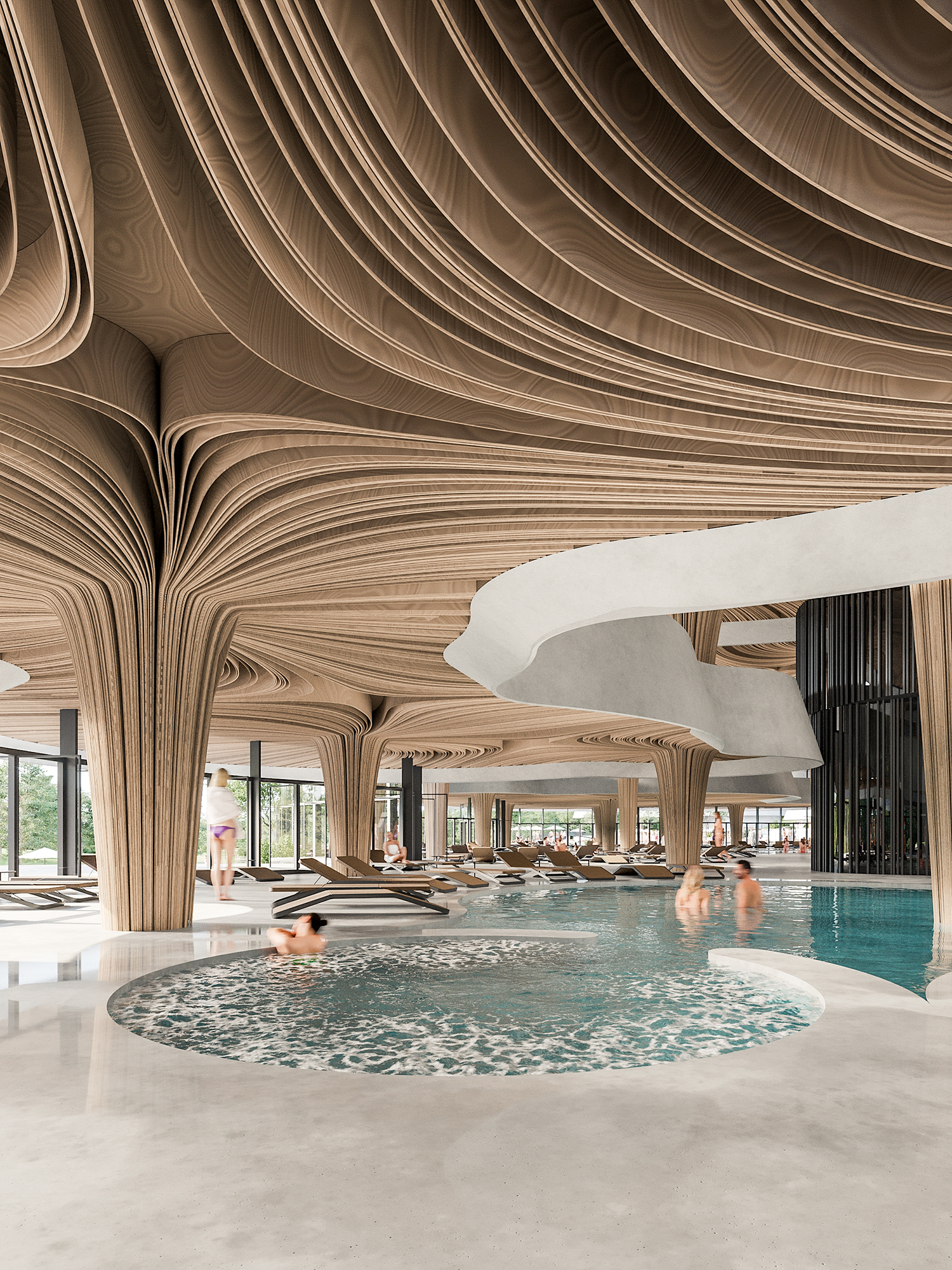 The new swimming pool building’s volume is divided into several smaller roof segments whose respective levels separate them from one another, yet they are still linked in a unified structural system. The elevation shifts also enable clerestory lighting deeper in the space’s interior. The interior ceiling is additionally clad with a suspended timber structure which conceals all the necessary installations and lighting. The organic, undulating ceiling pattern reflects the basic desire for the highest degree of connection with nature while the wood offers a sensation of warmth in this very bright and open relaxation space.