Wick Architecture & Design, in partnership with LAND Design Studio, have unveiled the unique ambiance of Stereoscope, a branded coffee shop in Newport Beach that is turning heads with its cathedral-like opulence. The Newport Beach location is the second store opening for Stereoscope Coffee in Orange County, and raises the bar on the modern coffee shop experience for the roaster’s sophisticated coffee clientele.

Well-received since its opening, the coffee shop is situated on the ground level of a large two-building office complex sharing a common courtyard. The owners, Texas-based Granite Properties, brought in the design team to partner with Stereoscope Coffee as part of a mandate to create a buzz within the building that would resonate with its tenants. 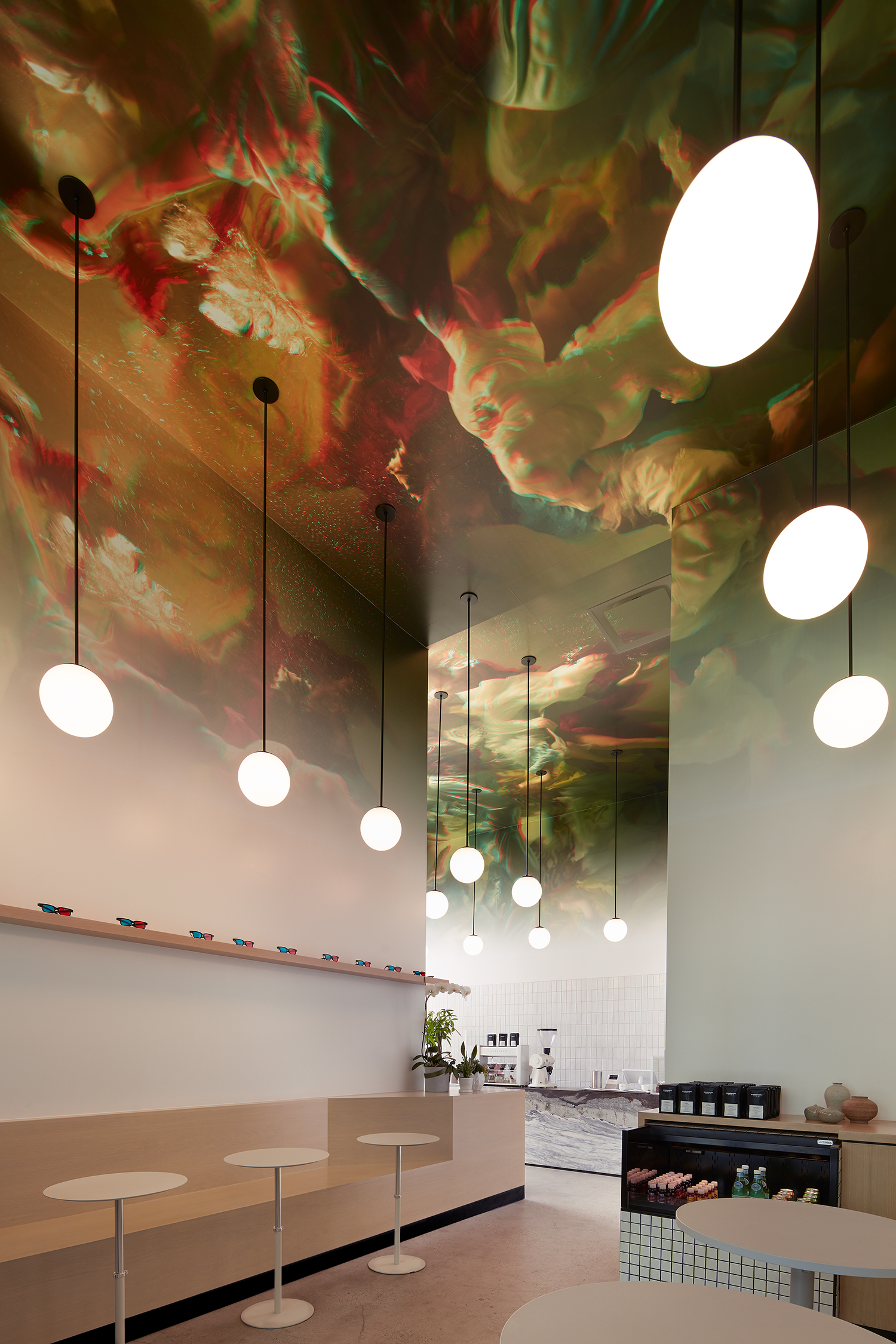 “We were approached to assist Stereoscope Coffee in creating a ground floor amenity that would not only provide a service, but which would also generate excitement,” explains David Wick, principal and lead designer of Wick Architecture & Design. “The client wanted something that had never been done before, and we believe that we have given them exactly that.” 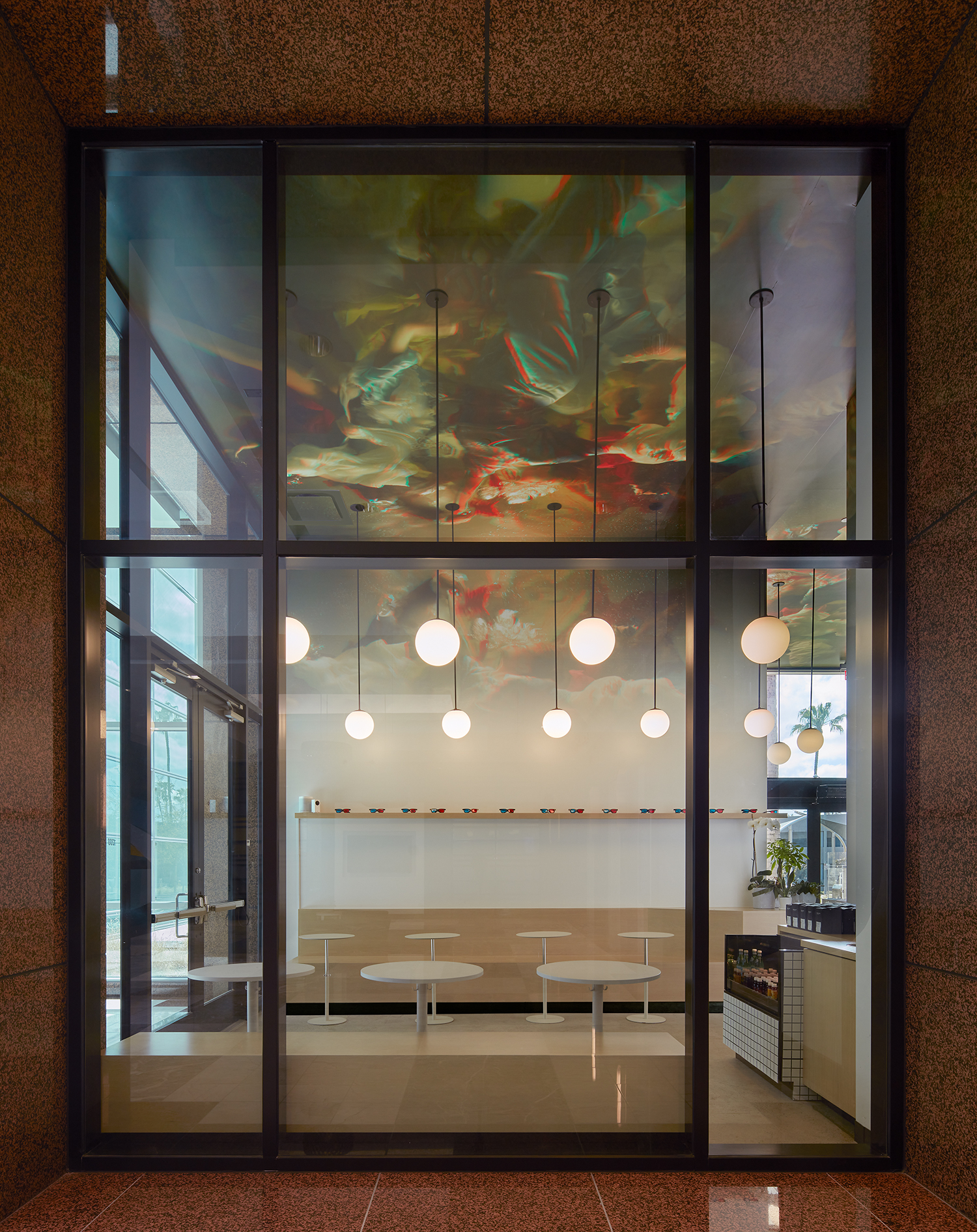 The design team was tasked with infusing excitement into a narrow, L-shaped space with a 15’-0” foot ceiling. The space connects to entrances at both ends of the L, including one adjacent to the building’s lobby, and another connecting to the exterior courtyard. The layout, together with Stereoscope Coffee’s taste for modern, minimalism, created a unique challenge for Wick and Lindley. 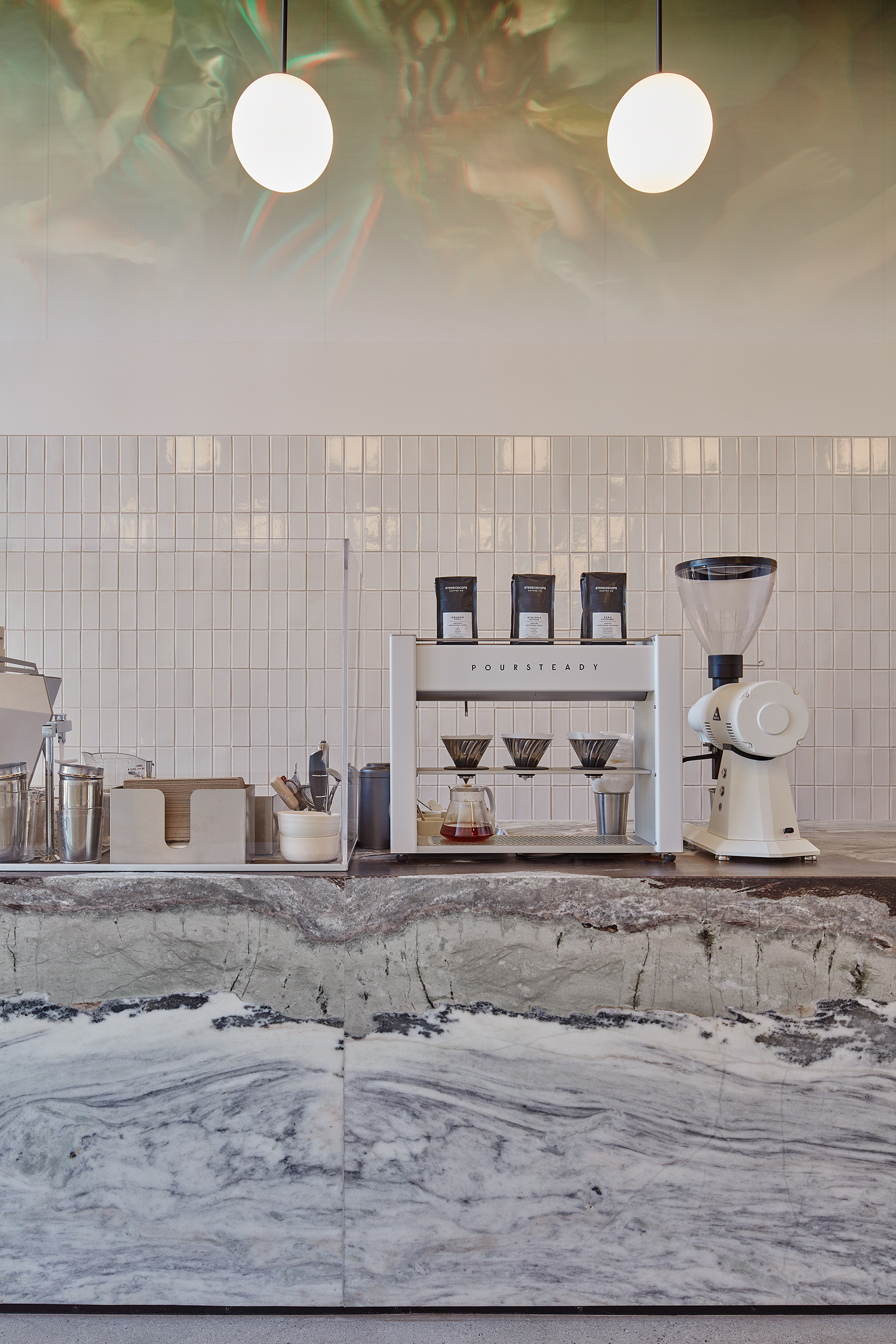 Having traveled the world extensively, David Wick and Andrew Lindley harkened back to a recent trip to Italy, where they had the opportunity to view Correggio’s Assumption of the Virgin, a 16th-century fresco adorning the dome of the Cathedral of Parma. The duo envisioned the possibility of a modern interpretation and adaptation of that historic Renaissance approach, with a multi-dimensional aspect to it that would capture the essence of the word ‘Stereoscope’, a precursor to modern 3D technology. With a concept in mind, the design team turned its attention to the challenge of bringing the vision to life as a body of work that would dazzle the masses. 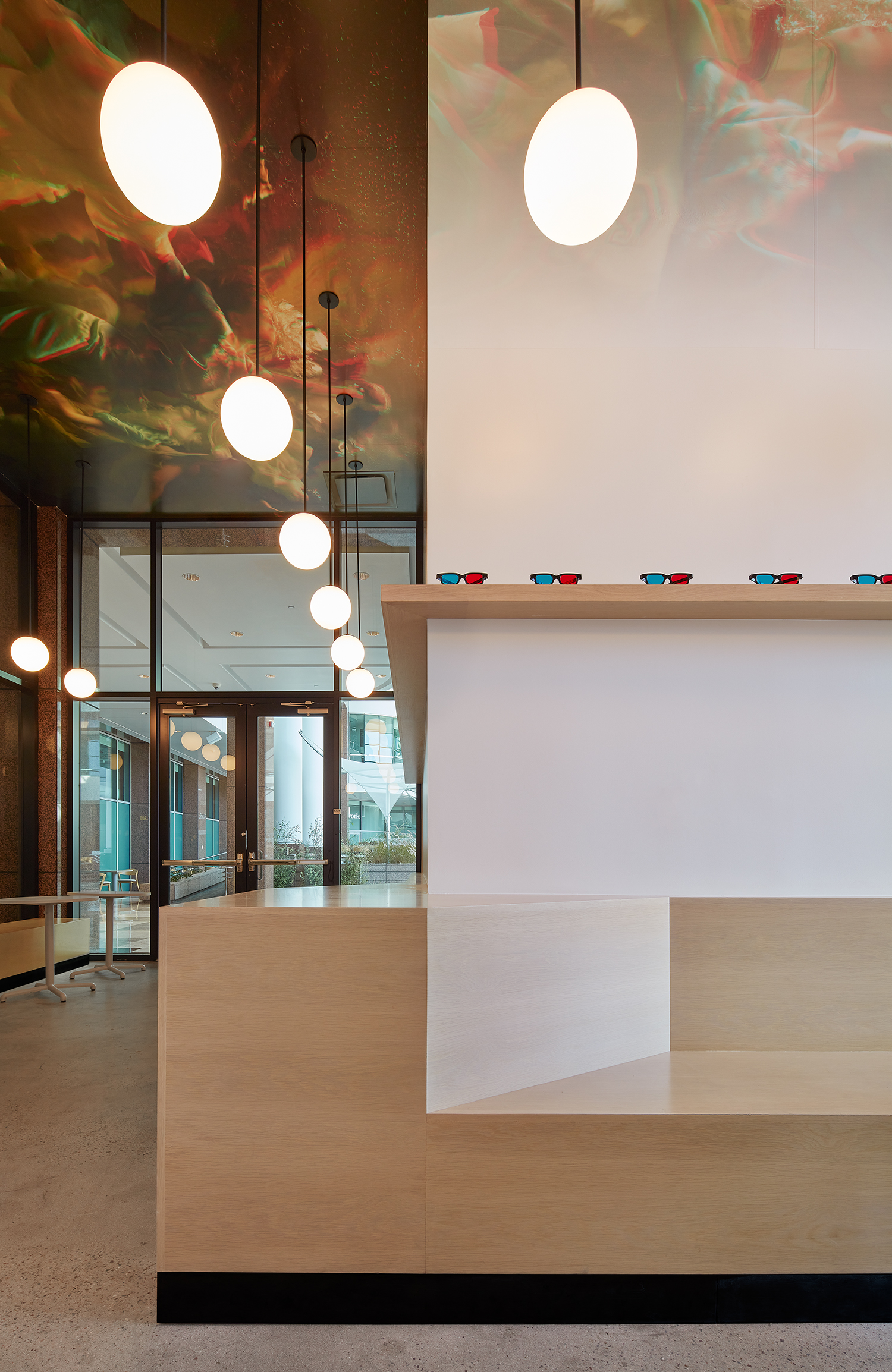 “We recalled an artist named Christy Lee Rogers, who is renowned for her unique underwater Renaissance and Baroque style photography,” notes David Wick. “We approached her with the idea of licensing a piece of her work, The Reunion of Cathryn Carrie and Jean, and then transferring it to 3D.” 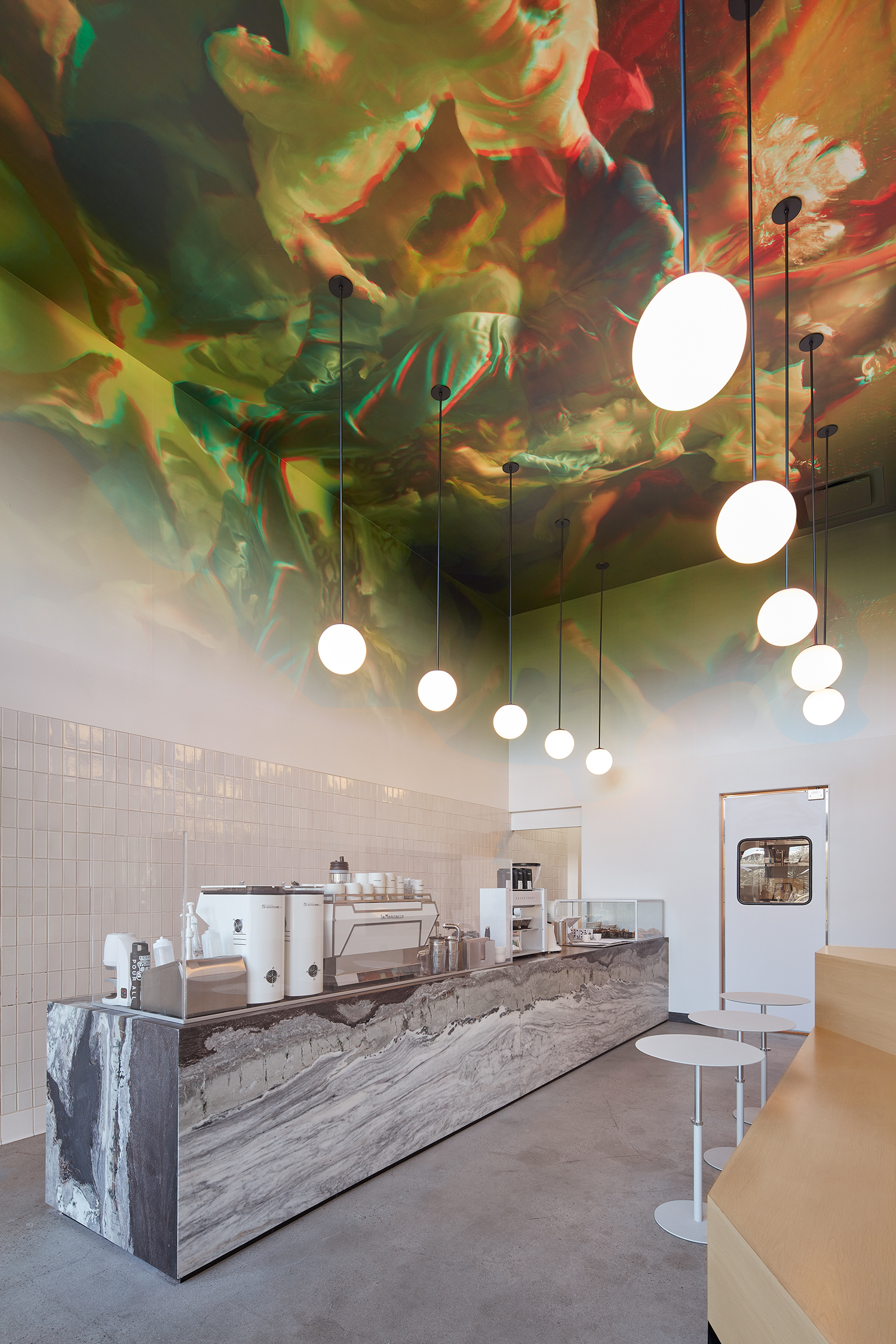 Armed with a work of art and a clear vision, Wick and Lindley studied the path to achieving their goal from hundreds of different perspectives. Would it be black and white, or in color, and would the image flow down the wall, or gradate?

“After extensive study, at the end of the day we felt that the strongest interpretation would require the use of color on the ceiling,” explains Andrew Lindley, principal and lead designer of LAND Design Studio. “We also chose to gradate the image downward to have it seamlessly fade into the white of the walls.” 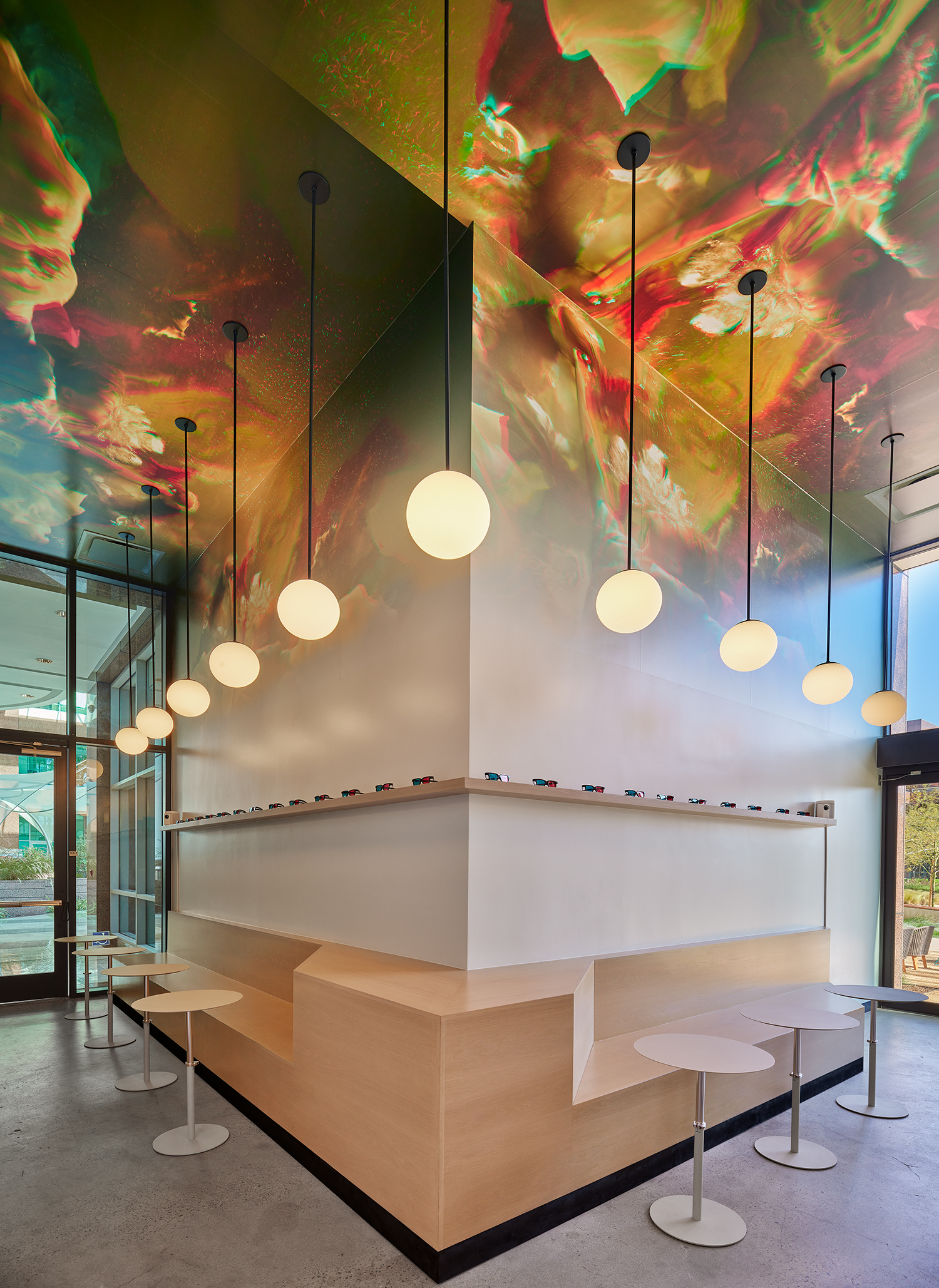 The next step in the process was to transfer the art to the ceiling. Working in close collaboration with a Nashville-based blueprinters, Big Visual Group, the design team developed a key for cutting the art into pieces, before printing the pieces onto 5-foot vinyl rolls with one-inch overlaps to work with. They also made several adjustments to the collective work’s level of 3D projection, ensuring that patrons who opted not to wear 3D glasses would still have a beautiful and eclectic work of art to view. Once completed, the vinyl rolls were applied to the ceiling like wallpaper during a remarkable installation process that took less than a day to complete.

Where the elaborate artwork fades to white, 8 feet above the floor, Astro Globe lighting fixtures from Andrew Neyer’s Suff collection align to provide a strong, clear line The lighting bends around the corners of the L to accentuate the space, while also serving to delineate the modern, minimalist décor below. 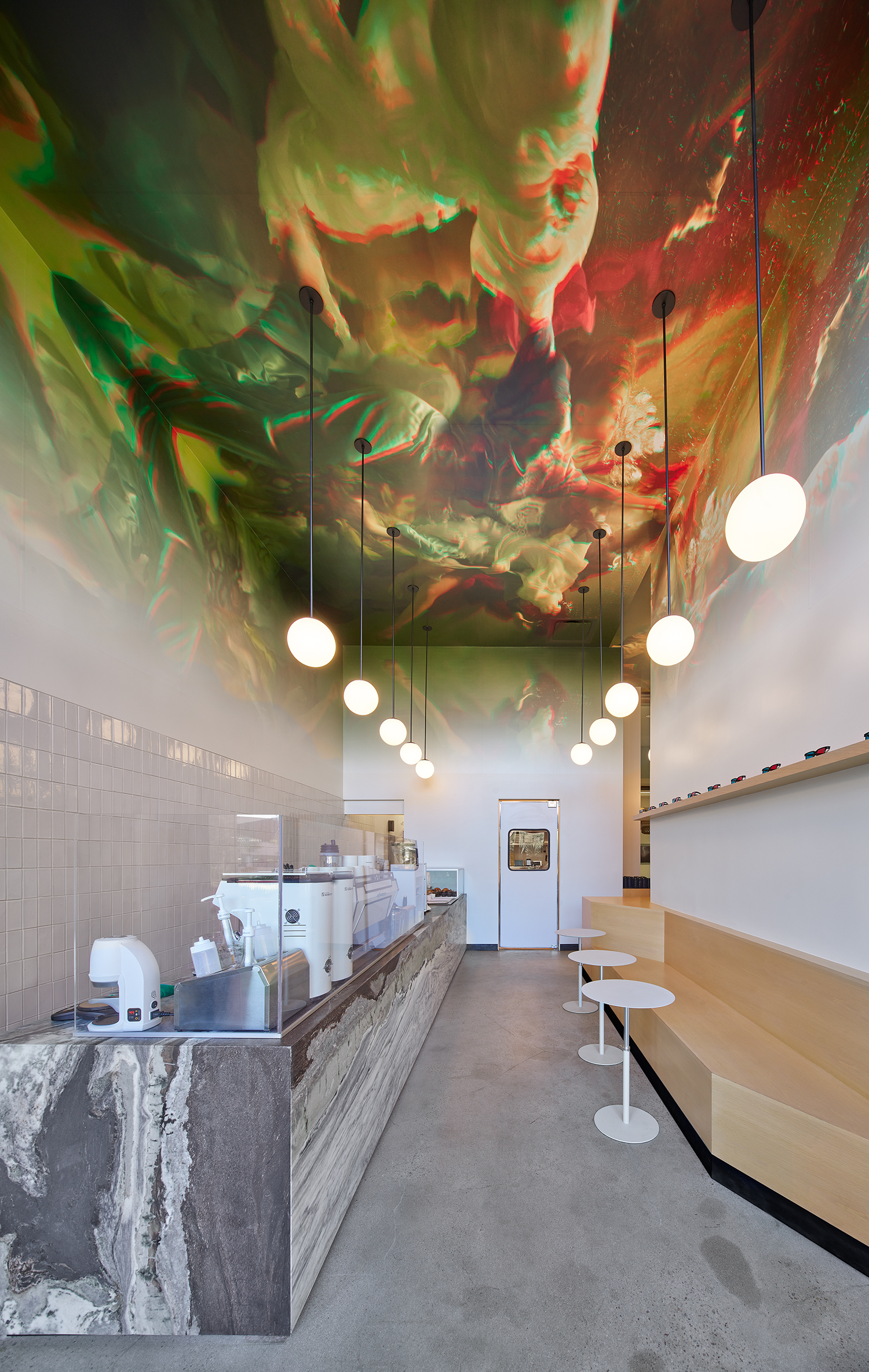 In contrast to the boldness of the cathedral-like ceiling, Wick and Lindley chose materials within a warm, modern palette to ground Stereoscope’s interior to its natural concrete floors. White oak bench seating wraps around the L-shaped space, accentuated by a 6-inch ledge for convenient storing of personal items. Visible from both entrances, blue orca marble by Wink Design Source infuses movement and texture into the cut stone coffee bar’s minimalist composition, while bone-white matte tiles line the back of the service counter to provide a very warm and blended texture. Finally, above the bench seating, shelving for 20 pairs of 3D glasses provides access to the full visual grandeur of the artwork above, completing the space’s avant-garde experience.

“This project is a prime example of how interior design can transport a vision beyond the confines of the space that it occupies,” says David Wick. “We’re proud to have pushed the boundaries of traditional design to deliver something truly distinct and remarkable for our client.”