Hungarian practice Studio Arkitekter has recently completed the interior design of this four-room apartment that will compete with the increasingly dense Budapest accommodation market. Located on the top two floors, the 170 square meter apartment is equipped with a sixty square meter terraces, that offers a “Parisian” views of downtown rooftops, as expressed in real estate term. On the lower level there are the communal areas: the kitchen-dining room, the living room, two spacious terraces, one-bedroom, while upstairs there are three more double bedrooms, each with a separate bathroom. 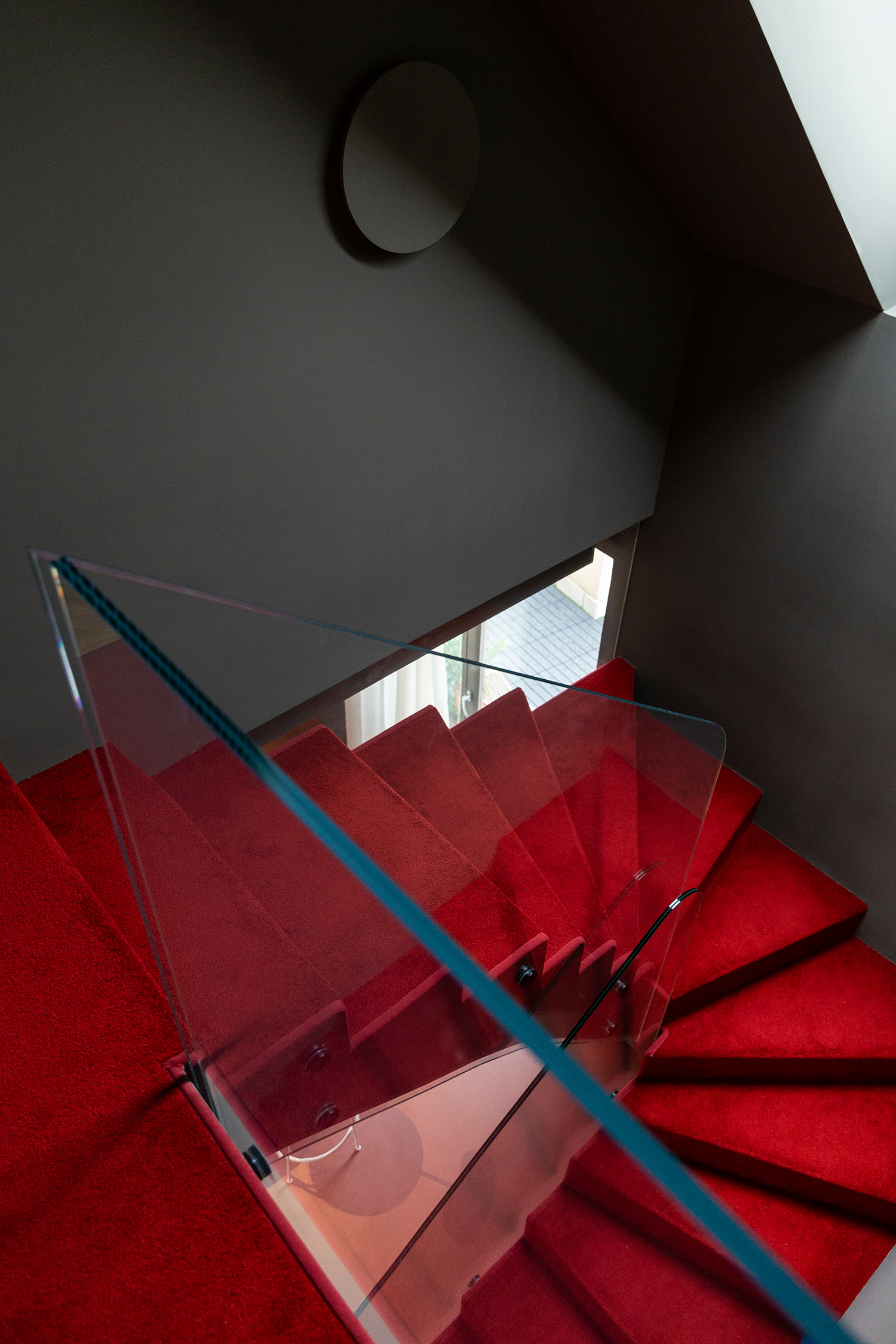 “We wanted a place that people could fall in love with – but not necessarily would be committed to have in their own apartment,” said Viktor Csap, head of Studio Arkitekter. “It’s bolder than you imagined for yourself. On the one hand, it’s more eye-catching – on the other hand, I’ve long wanted to design something dark to show that we don’t have to be afraid of dark colours, because it won’t necessarily make the property dark.” 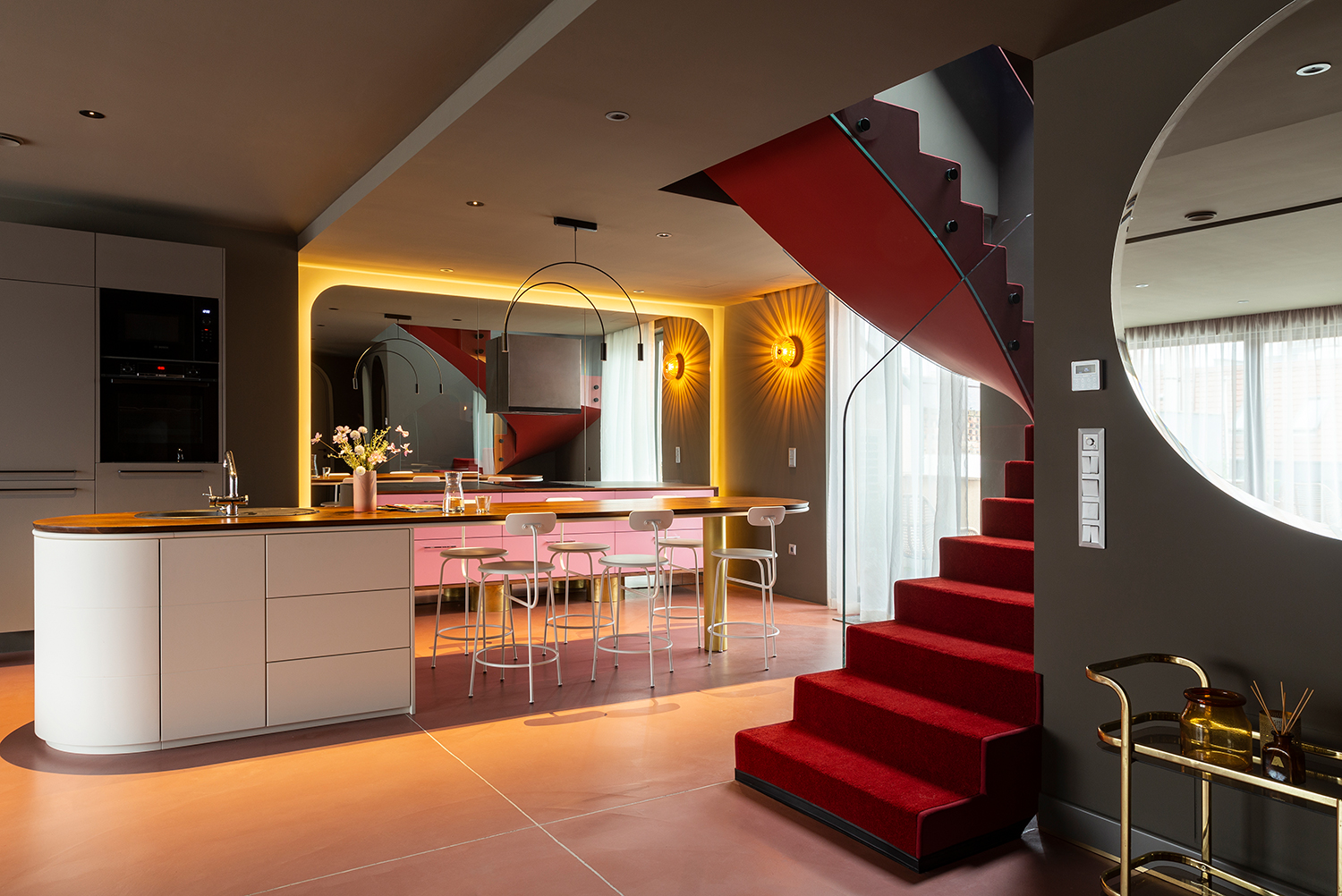 The interior of the apartment is therefore dominated by the dark olive green shade of RAL 6015, which provides a great backdrop for the lighter patches of Mobilia. Patterned materials were not intentionally used, so spatial bodies also act as picturesque surfaces. The mirror bears the same characteristics: it represents itself not as a protagonist, but as an additional surface behind the kitchen counter, for example. The six-millimeter-thick mirror glass situated in the hallway – the largest diameter circle that can be cut from this material – is virtually explosion-proof; it has already survived a significant fall without a scratch. 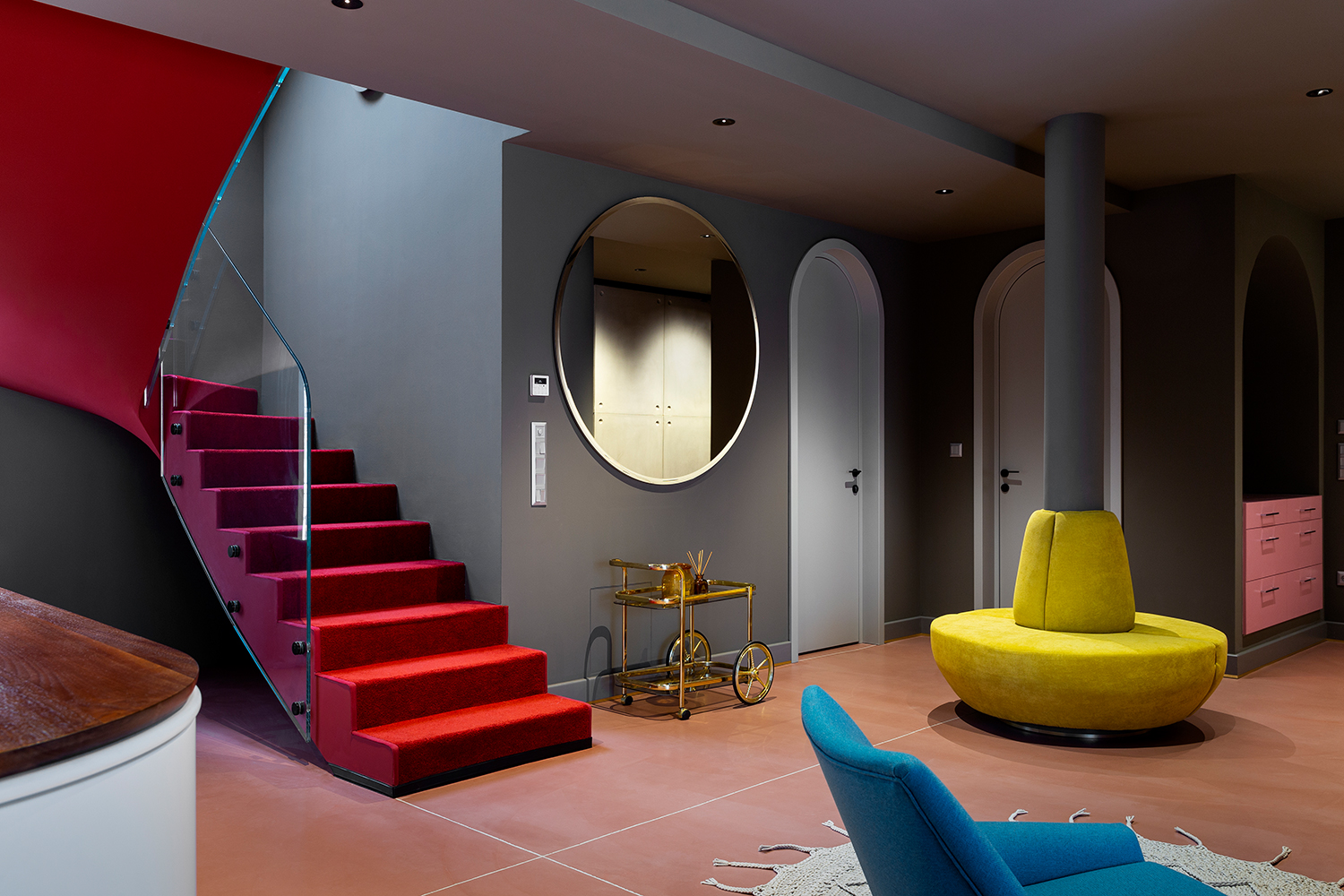 Durability will also be needed with this feature. The mini-hotel is considered relatively new in the domestic accommodation market. Each of the four independent rooms accommodates two people comfortably. They can be used independently, but its size makes the apartment a good destination for larger companies. For this reason, great emphasis was placed on noise protection. The doors were fitted with automatic thresholds, double plasterboard layers and a textile cover on the stairs were installed – while the red carpet is designed to absorbs the noise of late arrivals. 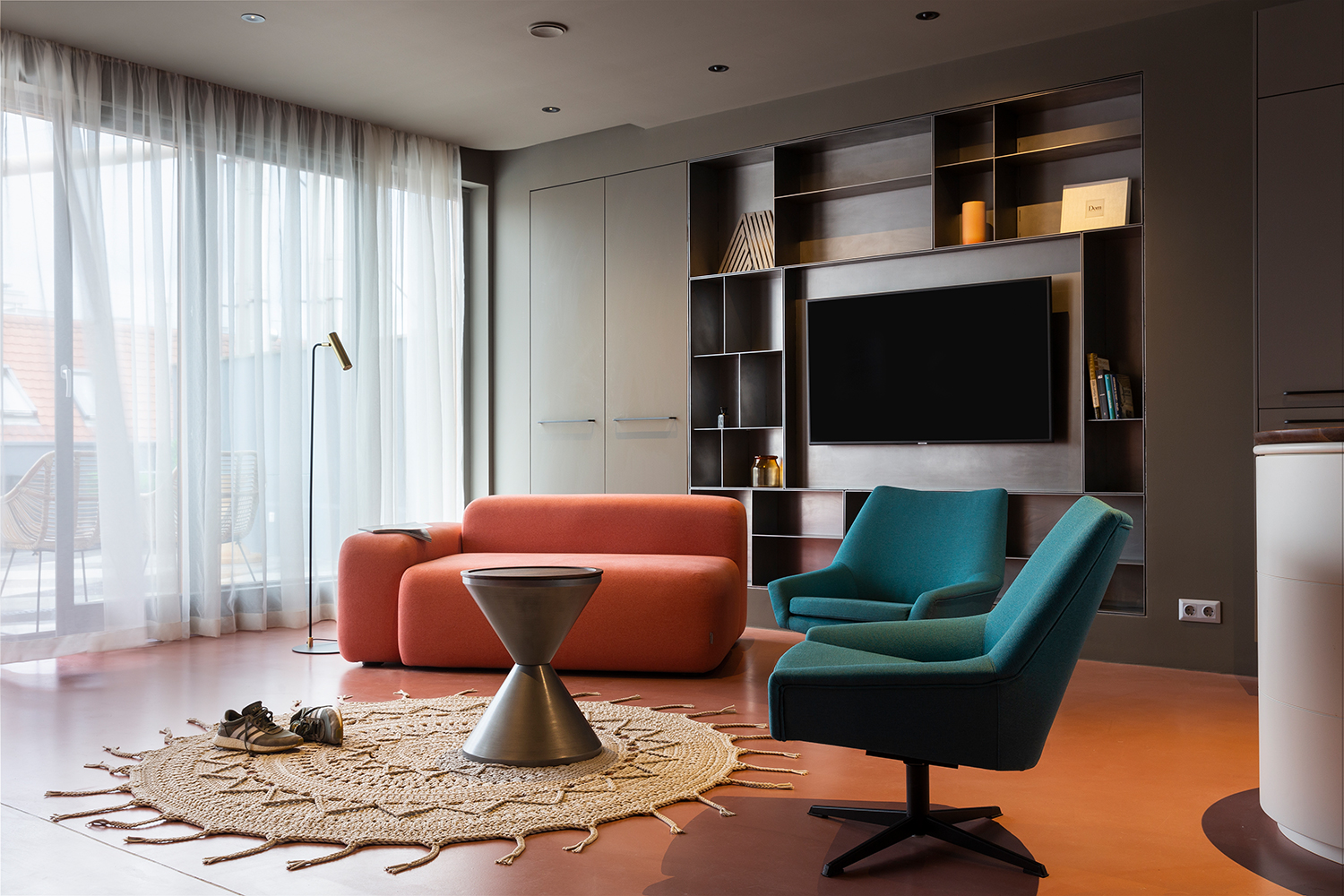 Not only is the designed function considered experimental – Studio Arkitekter, having been commissioned to carry out the design, has had the opportunity to try out some innovative technologies.

“The biggest challenge we faced was the cast concrete floor painted with iron oxide,” explained the studio. “We’ve never done this before. There was too much iron oxide in the first room – we got a beautiful syrah shade, that was a little more than needed. The second casting was mixed with more white pigment, which made the concrete very creamy and difficult to spread; that made it a bit industrial. We were satisfied with the final results.” 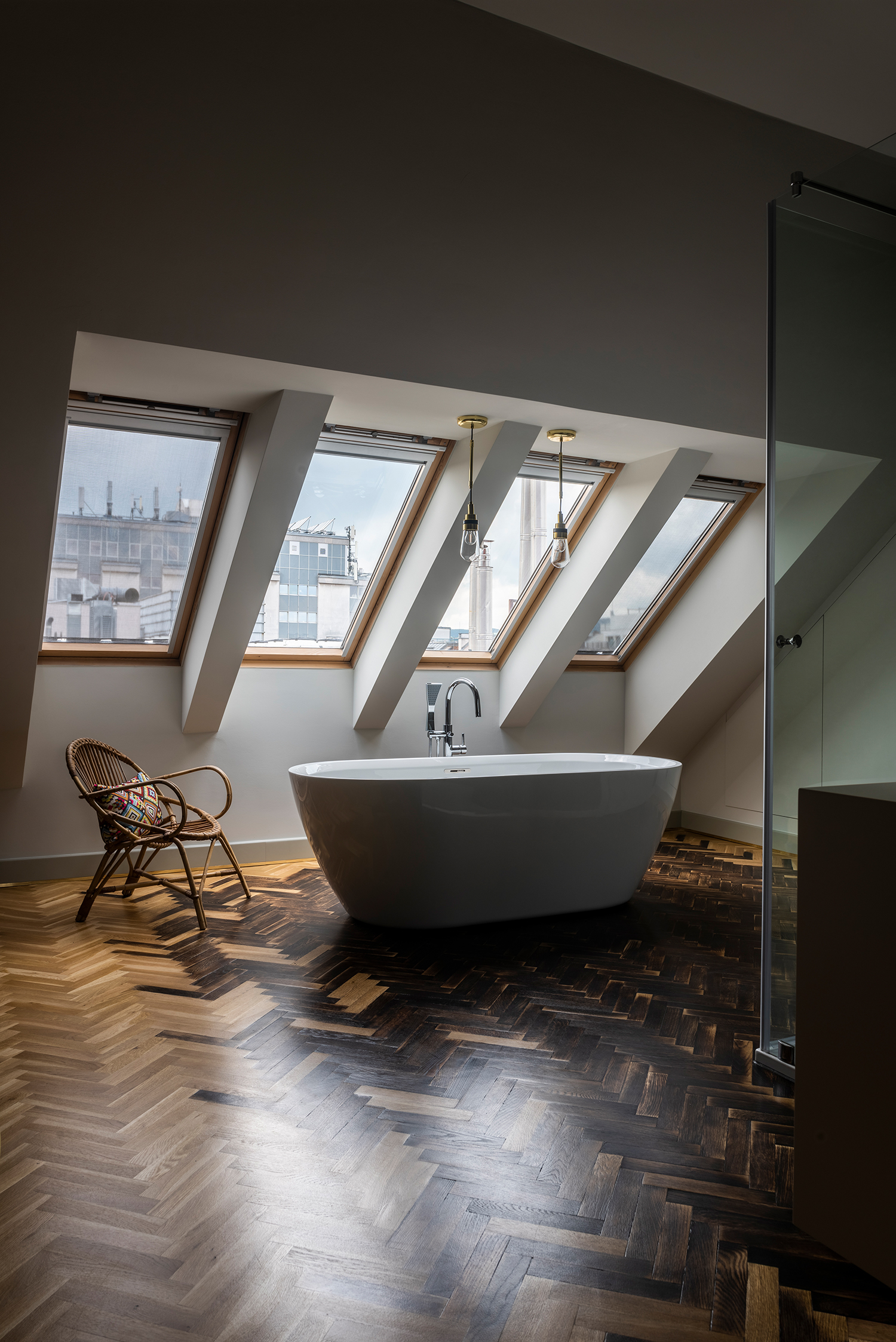 The terrace covering, diamond-shaped concrete elements were designed and constructed in-house, with a diameter of 120 cm and a weight of about 80 kg each. In addition, an interesting solution was found in one of the upstairs bedrooms, where the bath and the bed are in one space. To avoid clutter of tiles and different layers of parquet flooring, parquet was added to the wet area using special surface treatment called “shou sugi ban”, a traditional Japanese technique. The oil ordered from Japan was threefold applied on the parquet and burned to the black with a flamethrower. In the end, it proved to be even cheaper than using the originally designed tiles, and the Japanese oil manufacturer guarantees a 100-year guarantee on water resistance. It is worth planning for the long run… 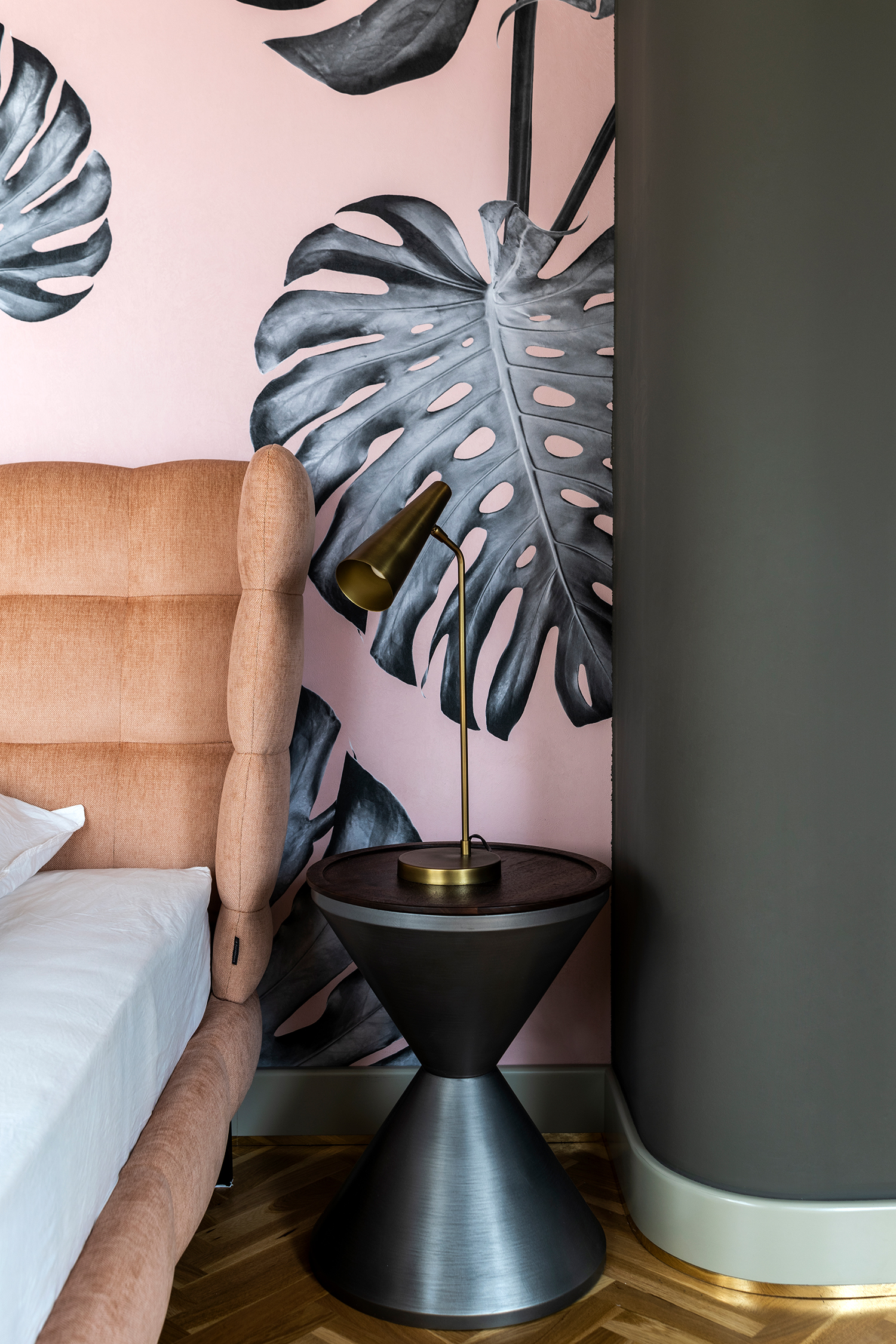