Tres Cinco Uno\Creative Studio signs the recently opened Claroscuro restaurant, located at 31 Velázquez street, one of the most prestigious arteries in the popular and well-known Salamanca district of Madrid. The restaurant, which is the first project of the young and highly experienced studio in the Spain capital, has a 200-square-meters space whose design has been inspired by brutalist architecture, in the 60’s Madrid style and in bar’s informal culture. 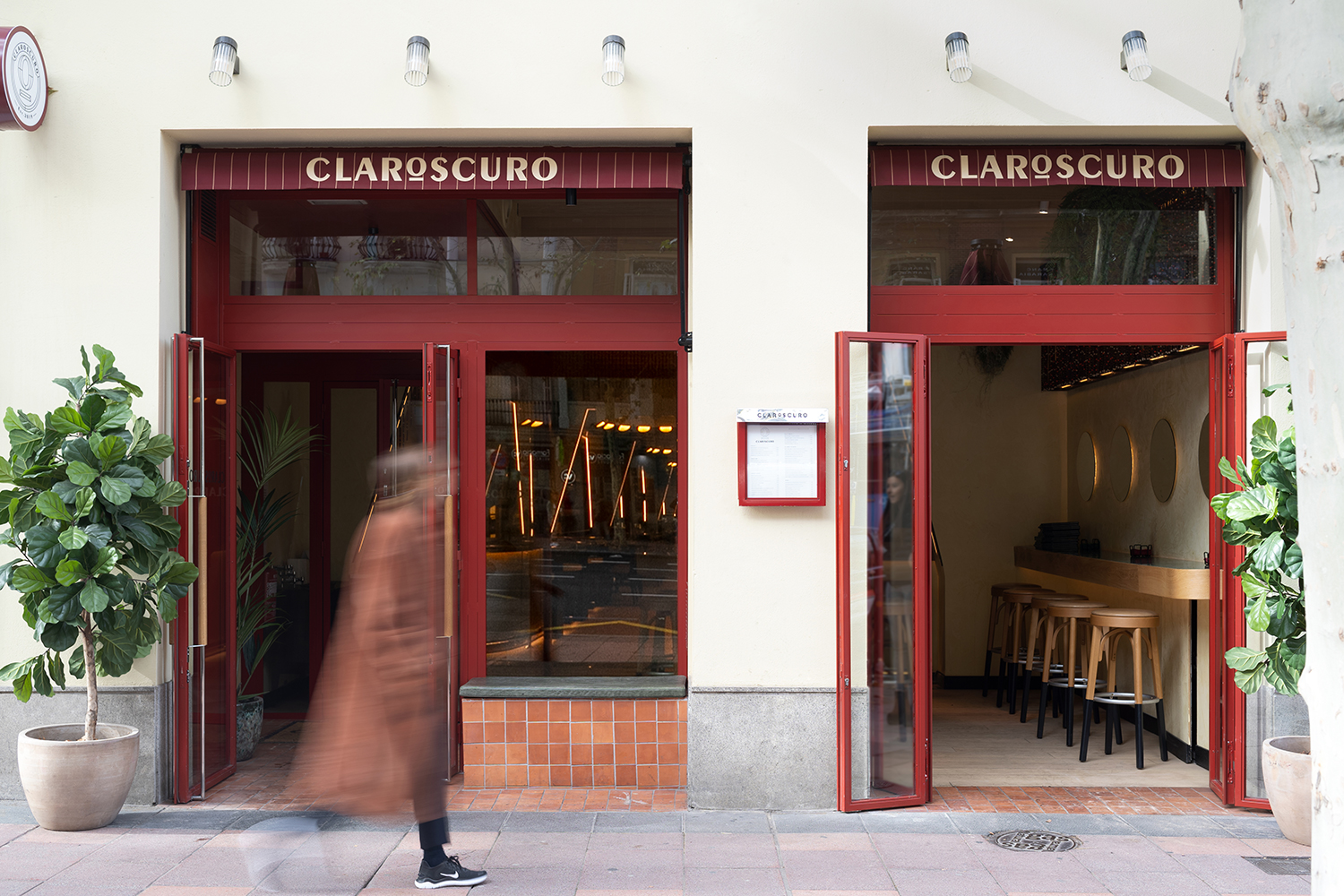 Without a doubt, Madrid is one of the design&style European capitals in terms of architecture and interior design. For this reason, Tres Cinco Uno, with the Claroscuro’s interior design and branding project, has attempted to keep up with it and bring together a complete and successful experience for the customer in the same space: a high comfort place from a catering sector point of view; a hedonistic place, from design and a construction point of view, A space that envelops, praises and rewards the senses. 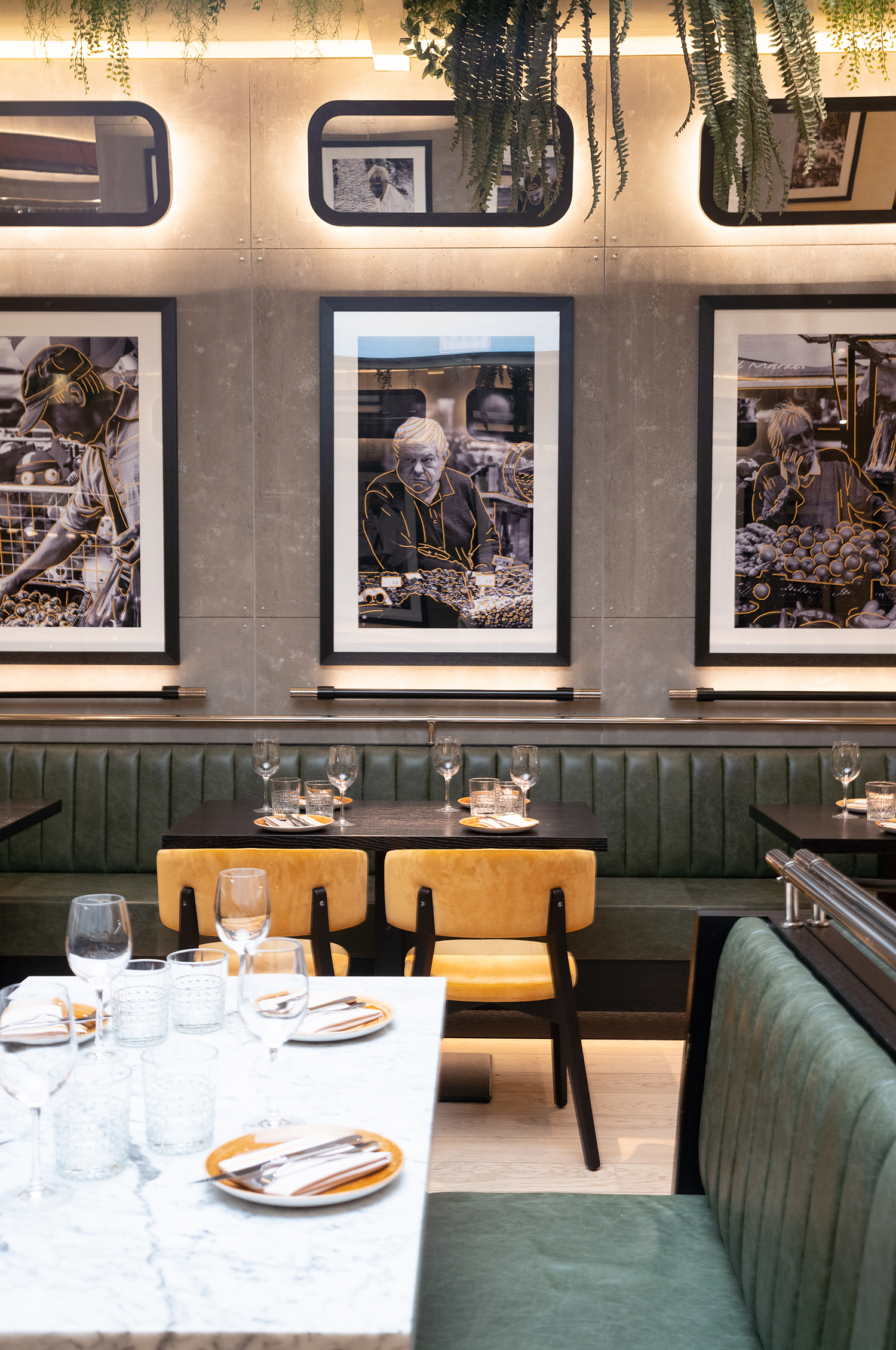 Since Claroscuro opened in late 2019, the restaurant has positioned itself as one of the new jewels on Velázquez Street. It is exposed to the street through a facade dressed with large garnet awnings that, together with its carpentry of the same color, opens completely to the street, stripping the bar of the restaurant and giving rise to a new porch’s concept. It is the restaurant’s riskiest side. Place designed conscientiously in order to the client can enjoy sitting on the benches located in the same Velázquez street, as well as in the bar, with an aperitif or some wines, a custom so deeply rooted in Spanish culture. Precisely to extol that culture, the marble curtains are used, due to it was such a decorative element so common in the Spanish bars of yesteryear. 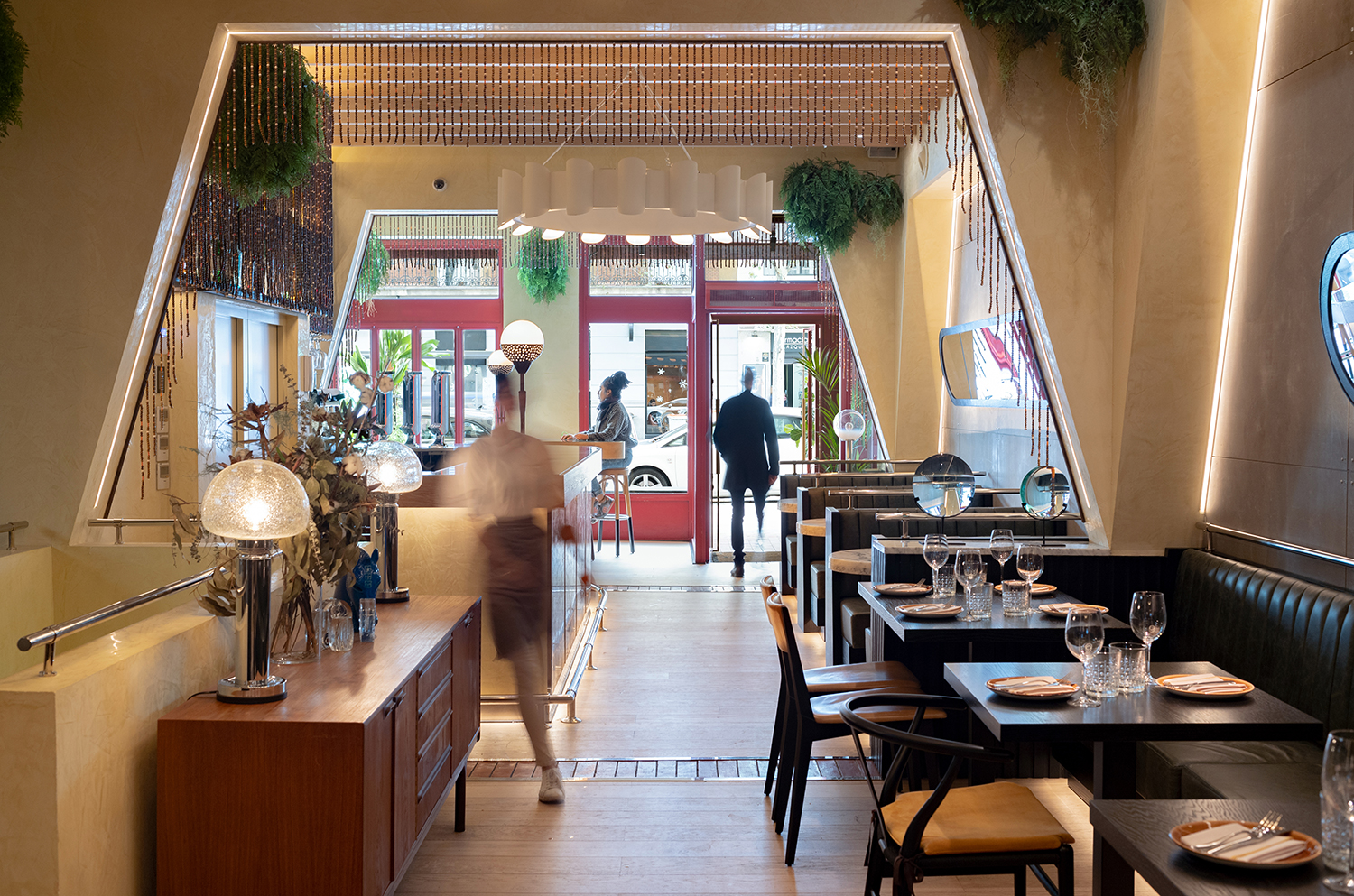 Leaving the porch behind, we enter the restaurant through a corridor of geometric arches that end in different subspaces that be dining rooms. If there is something that characterizes the interior design of the restaurant, and which is also the reason for its name, it is the lots of mirrors that run along the perimeter of the space, generating infinite points of view and activating light and shadows. This luminous game is the creator of atmospheric volumes that characterize the restaurant. A fusion between light-dark – and simplicity of color, which creates rhythm and dynamism for the client to discover the reality of the space. 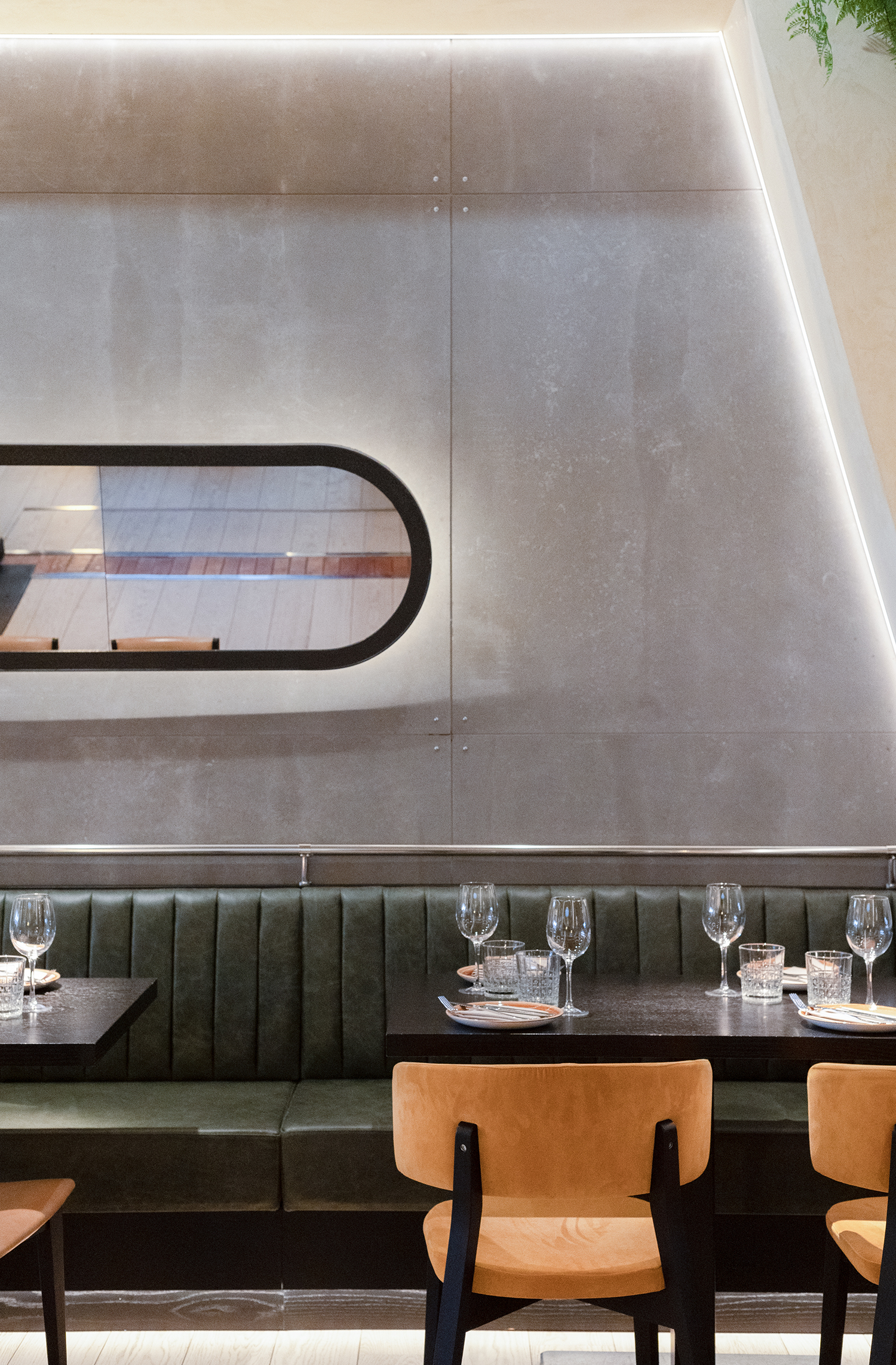 In this way it gets into a large room presided by a monumental skylight with natural light during the day and an imposing lamp at night, making this place to be one of the most spectacular in the project. This room is also characterized by being the showcase of an extensive collection of photographs that show the market’s life, graphically worked on its surface with the aim of Tres Cinco Uno \ Creative Studio also used this contrasting language to design the restaurant’s corporate identity, for which it is also responsible. The confrontation of a complementary palette of red and green colors, and the use of the “O” of the restaurant’s name as an icon, are the characteristic elements of the Claroscuro brand’s visual image. 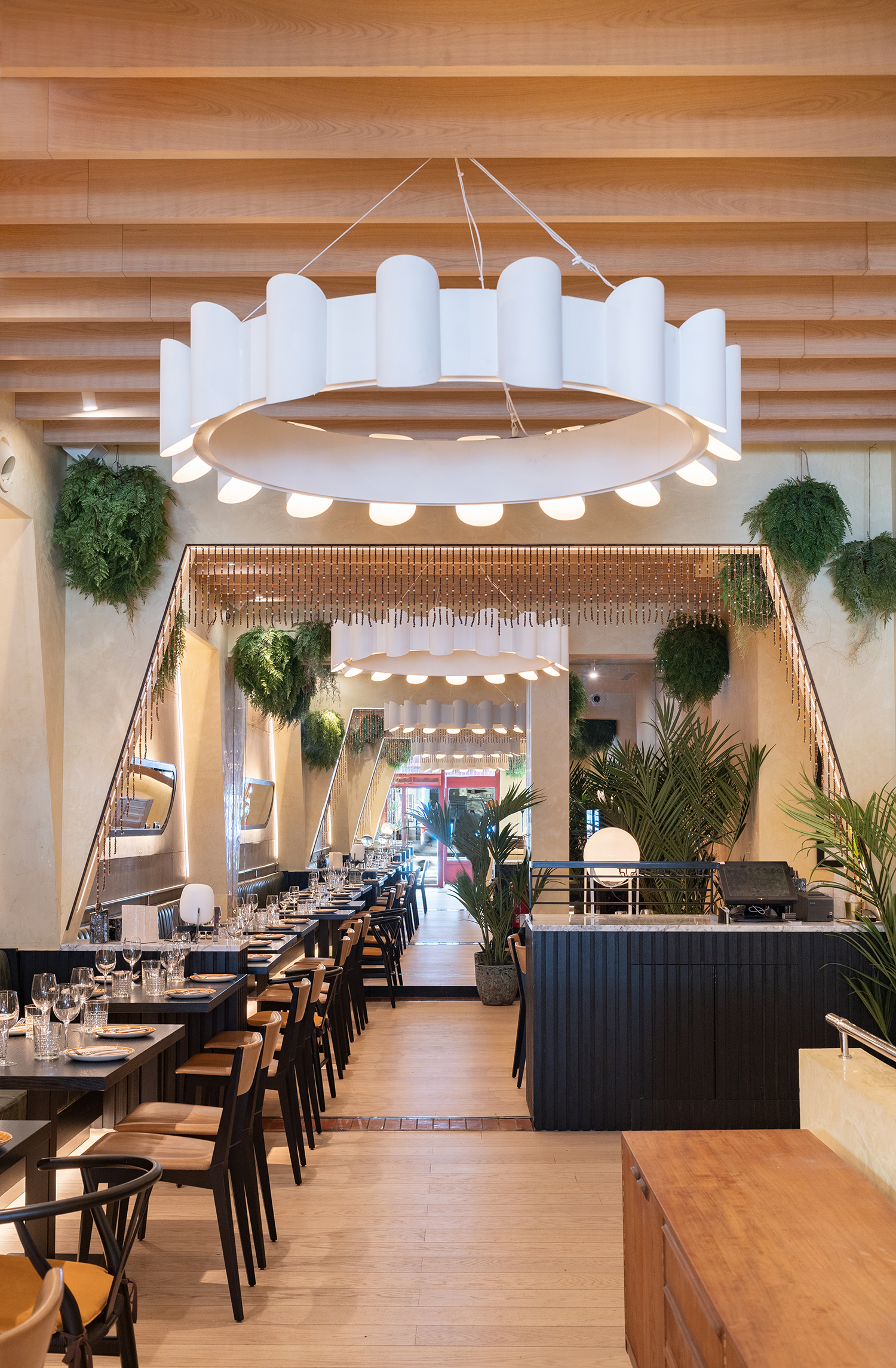 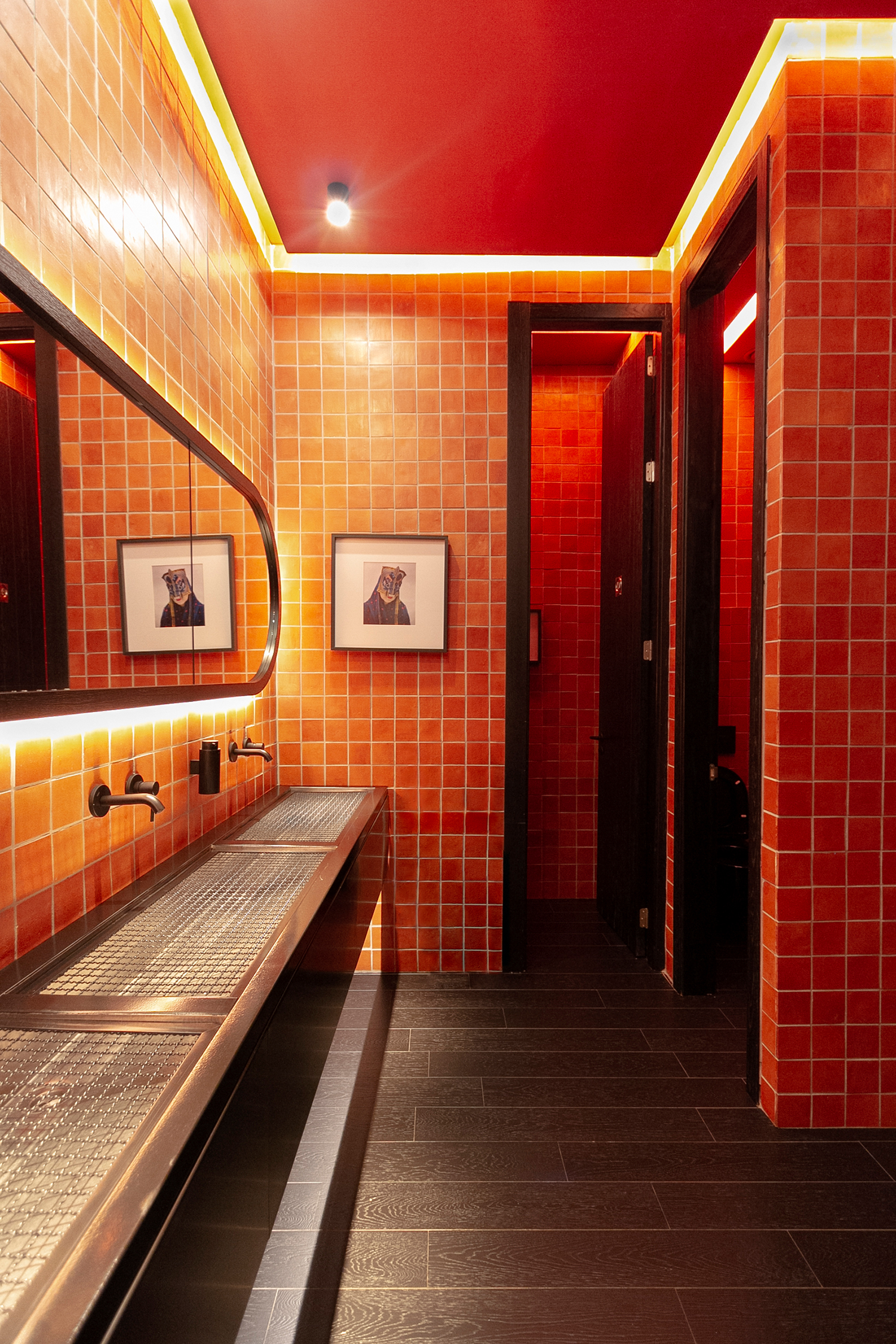