Located in the Abando neighborhood, a growing area in Bilbao, Bobby’s Gourmet is the new restoration project designed by Tres Cinco Uno. The gastronomic style offered by the restaurant was the guiding thread for the project’s development: American food in the purest “American BBQ dinner” style. The main objective was to dignify this kitchen, as well as all the lifestyle that surrounds it. 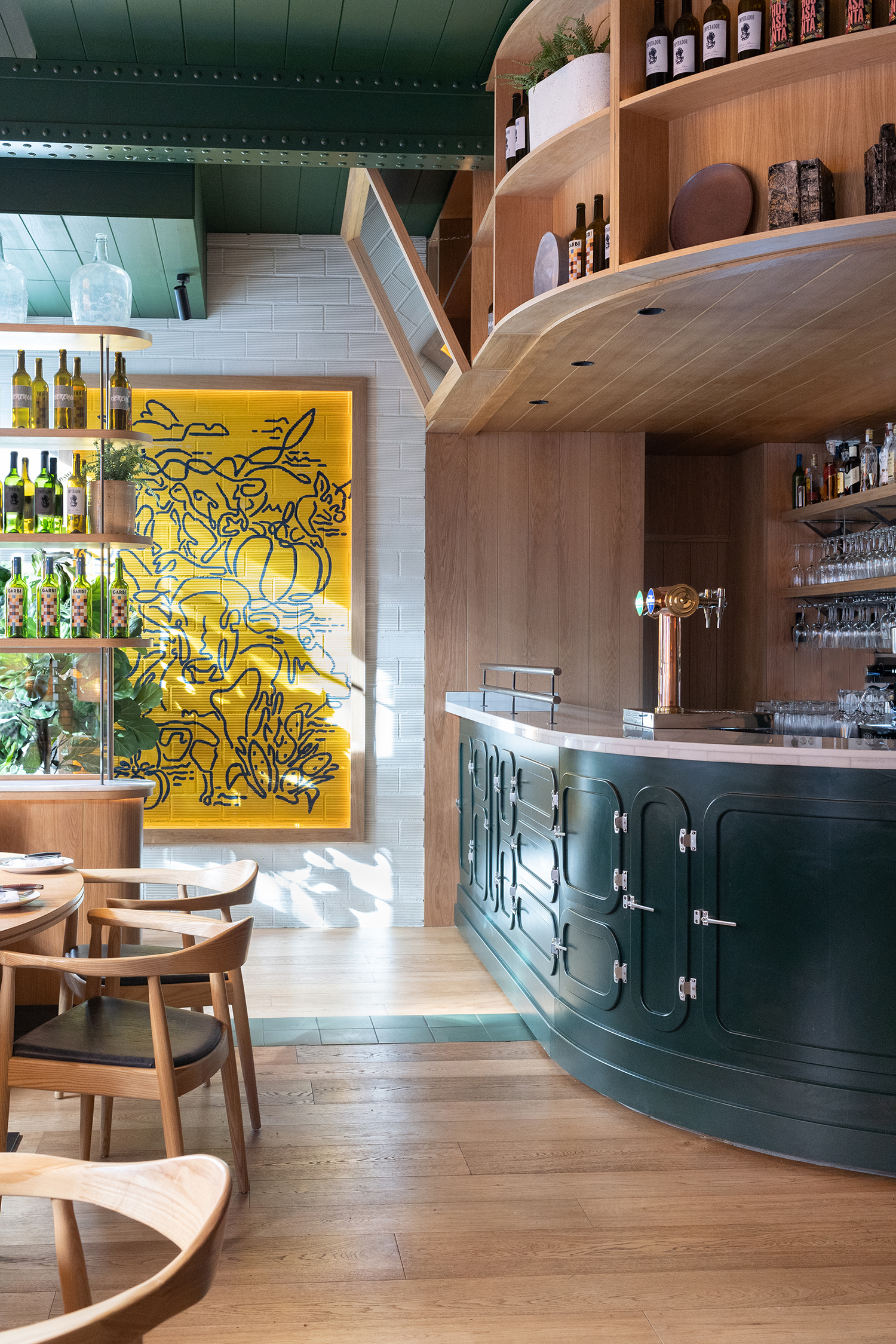 To do this, the 120-square-meters that the restaurant has were designed under the strategies of breaking with the aesthetic topics that surround Yankee gastronomy, designing a striking, understandable concept and creating its own identity, distancing it from the usual image that surrounds this restaurant model. 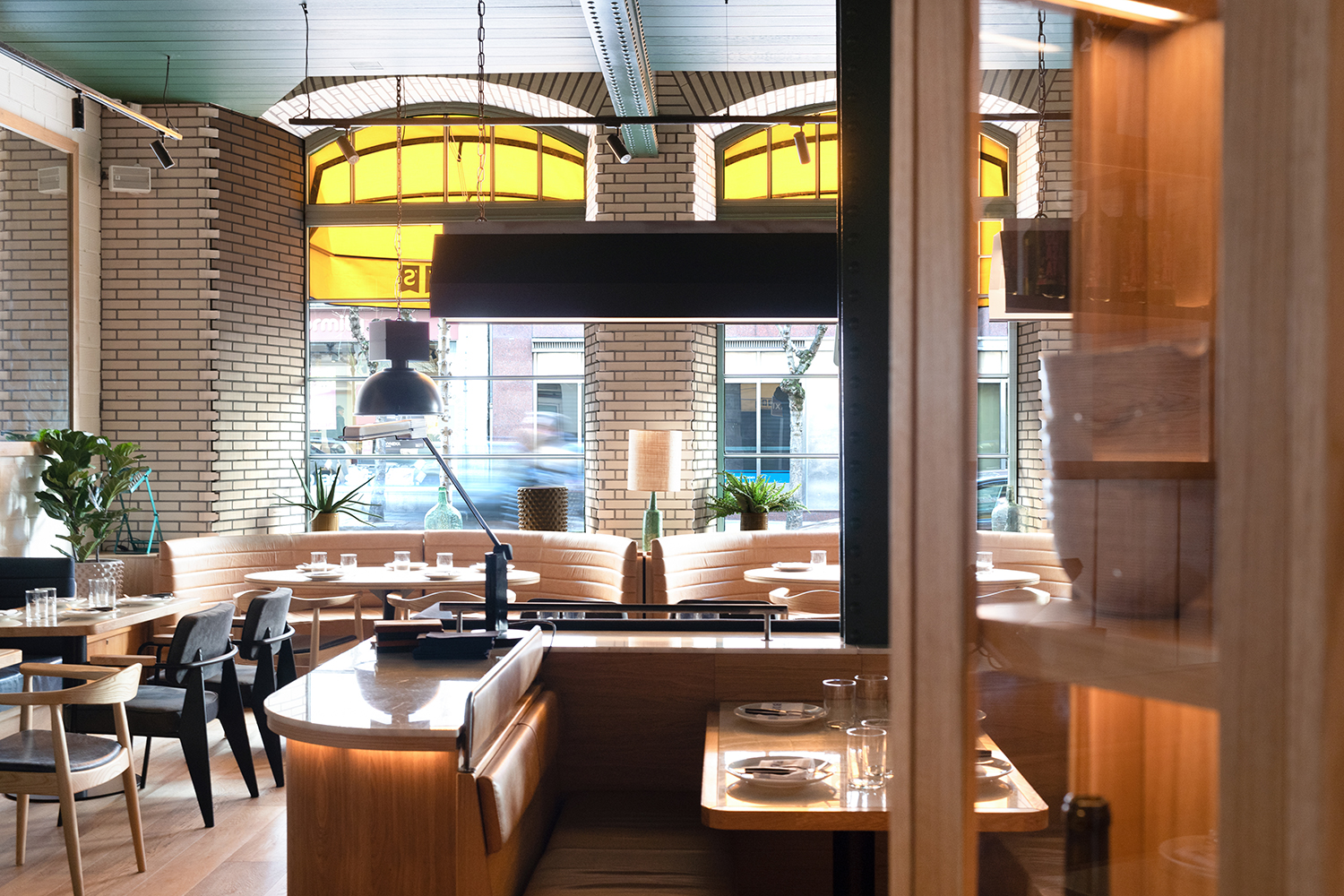 The venue has a public area on the street level. Large windows to the outside provide it with great natural lighting and, at the same time, they function as gigantic showcases, from where one discovers the leading industrial style that the space has.

The American barbecue has an undeniable social character and the space is conceived under that need. A space that allowed sitting groups of people was a requirement. For this reason, it was decided to structure the restaurant using large benches that would allow large groups and families to form, but without giving up more protected and intimate corners in the interior areas. 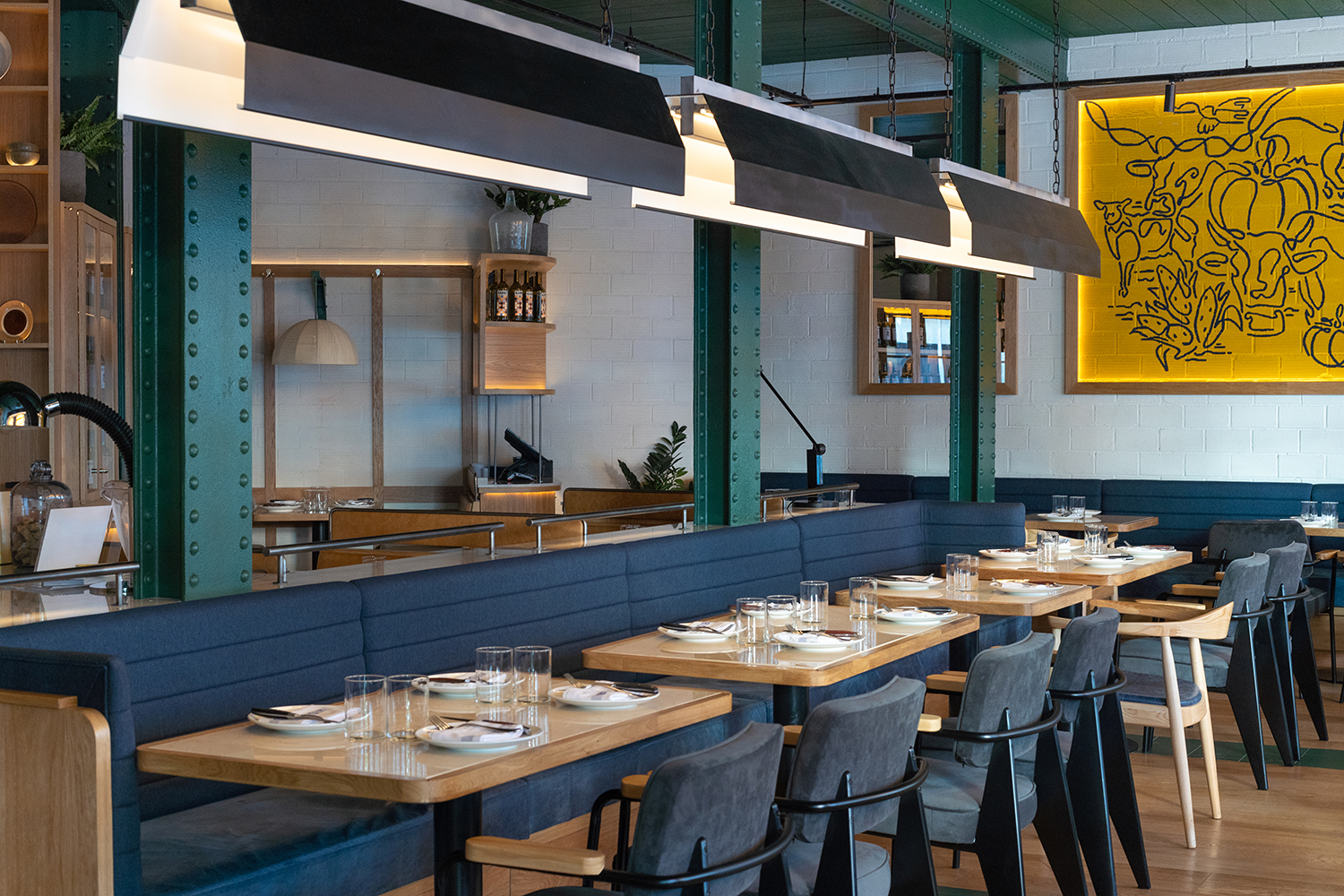 With an undeniably industrial aesthetic: exposed brick walls, painted brick, metal lampshade lamps and a pre-existing metal structure that space has. In addition, all these decorative elements coexist in harmony with the counterpoint of oak wood used in floors, in bench structures and in large wine racks that serve as coverings and dividers, and that provide warmth to the whole. 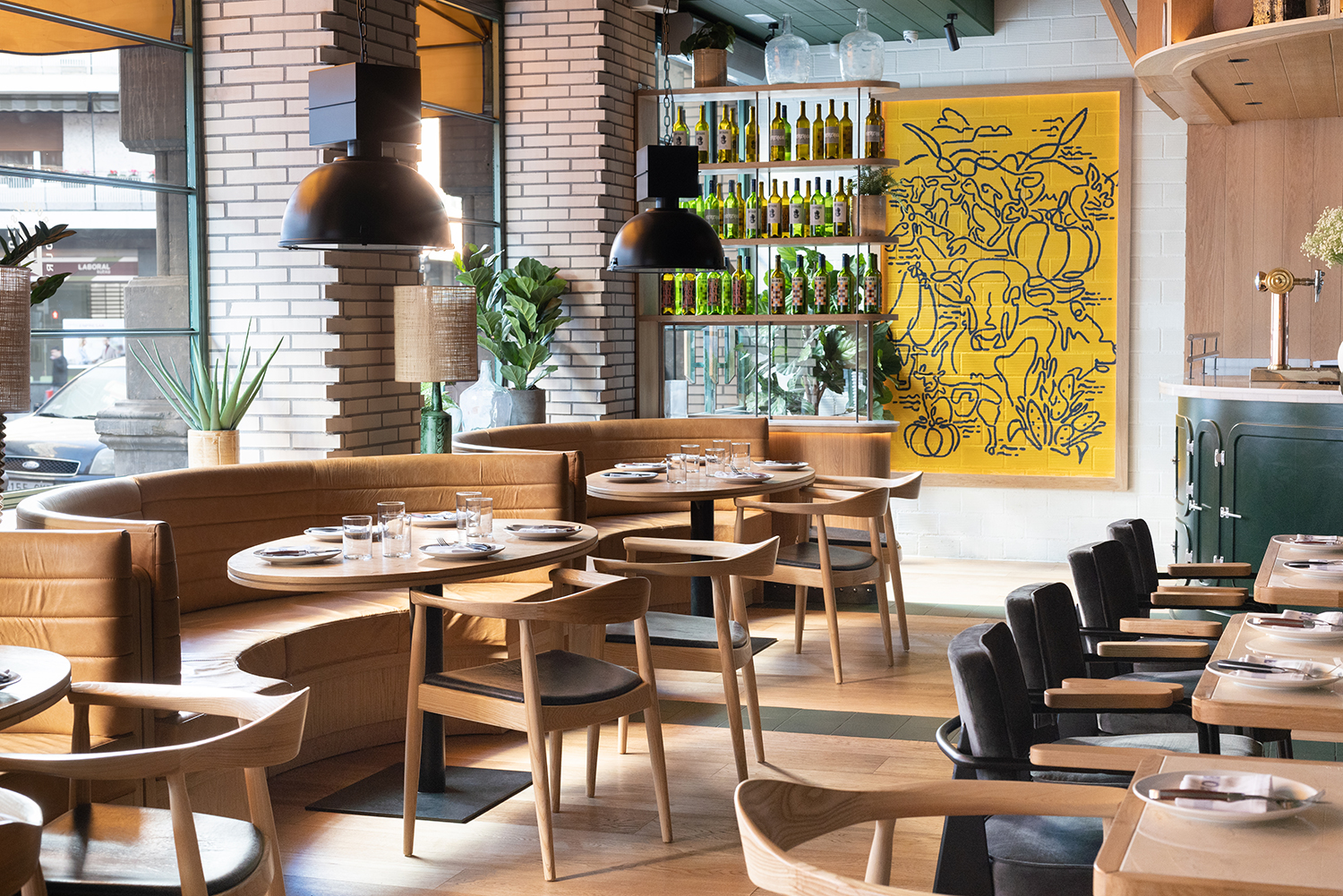 The yellow-large murals that crown the room were designed and painted by hand. With them, it was intended to extol the restaurant’s raw material. In a creative and artistic way, it wanted to divinize, on the walls, what was going to create joy on the plate. Always by means of an elegant drawing that flees from the obvious. 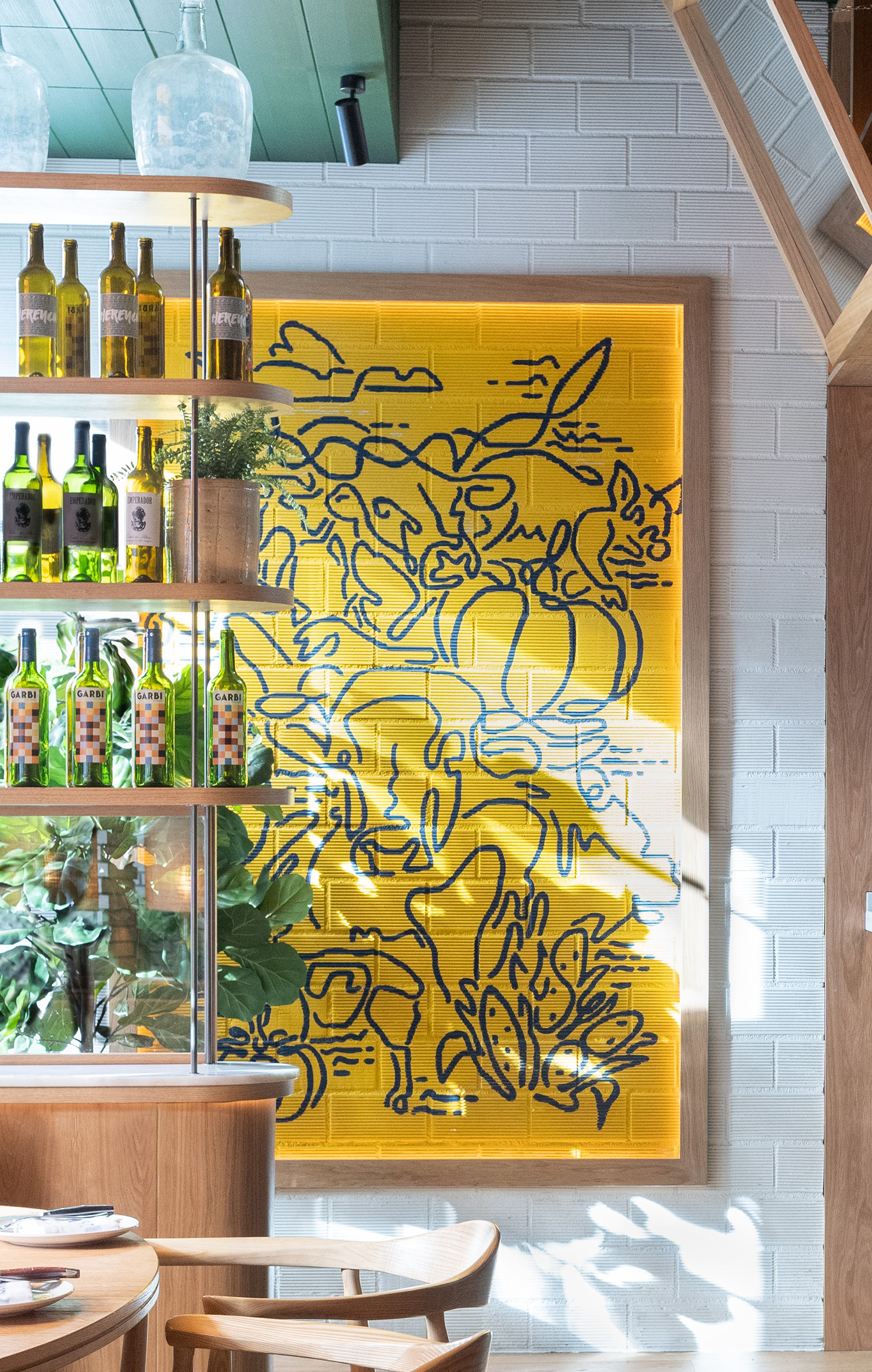 This idea and color accompany the development of Bobby’s branding design. Working with a very fresh palette, avoiding the classic colors related to American diners, using a playful, but contained, communicative tone, in order to refine the gourmet’s connotation and, previously, for the claim.