Concrete arch and gold details define Say No Mo, a beauty salon in Kyiv that Balbek Bureau has designed to avoid gender stereotypes. The ‘heart’ of the salon is a bar used for both beauty services and traditional cocktail receptions. The main task faced by Balbek Bureau from the very start of the design process was to break away from a traditional perception of a conventional beauty salon, and its gender distinction. 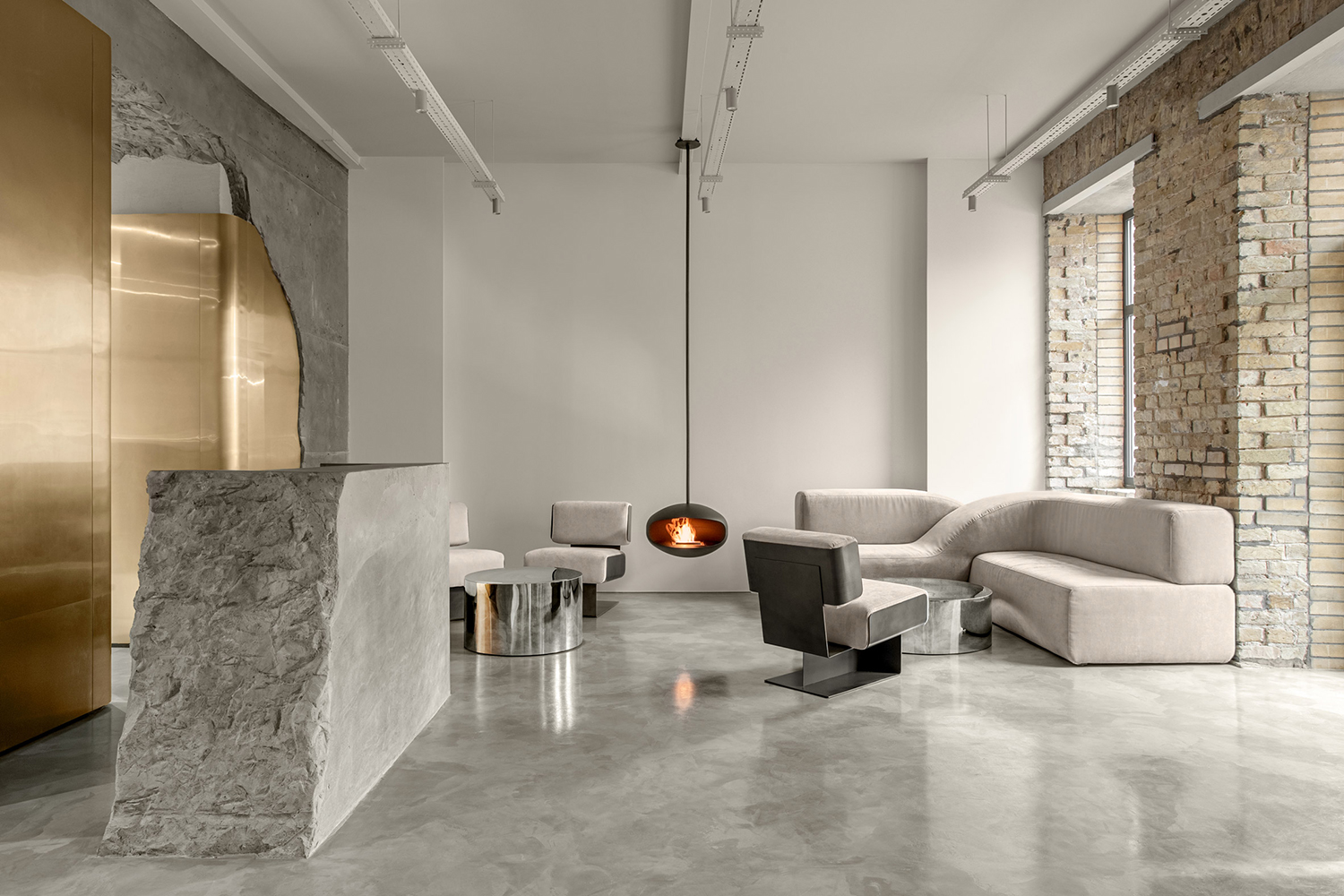 The owner of the establishment is Canadian. In her years of working in the beauty industry, she has learned how to make a client happy. This understanding became the basis of the interior solutions delivered by Balbek Bureau. To get on the same mental wave with the client is perhaps the most important aspect while working on a project. That is why the proposed concept took off instantaneously: first, in the hearts and minds, and half a year later – materializing on 36 Shota Rustavely Street in Kyiv. 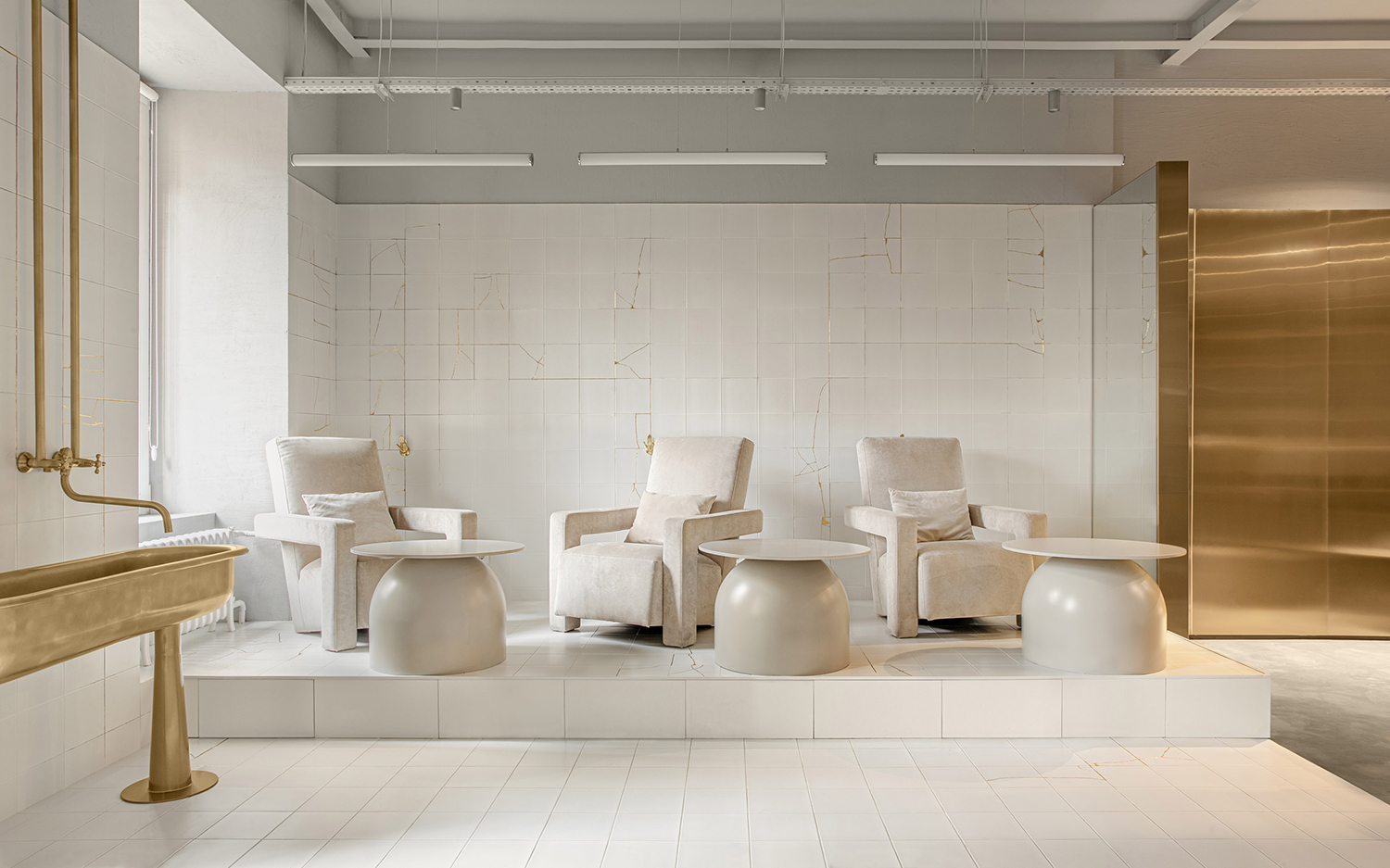 Say No Mo is a 200-sq. m, two-level premises in an old building in Kyiv. With the curved-walls geometry and without a single parallel wall, the place boasts 4-meter high ceilings and has a distinctive atmosphere. The ground level of the salon features several zones: reception, lounge, manicure/bar, and pedicure. The basement level contains a make-up zone, hair care, cosmetology, restroom, and facilities. 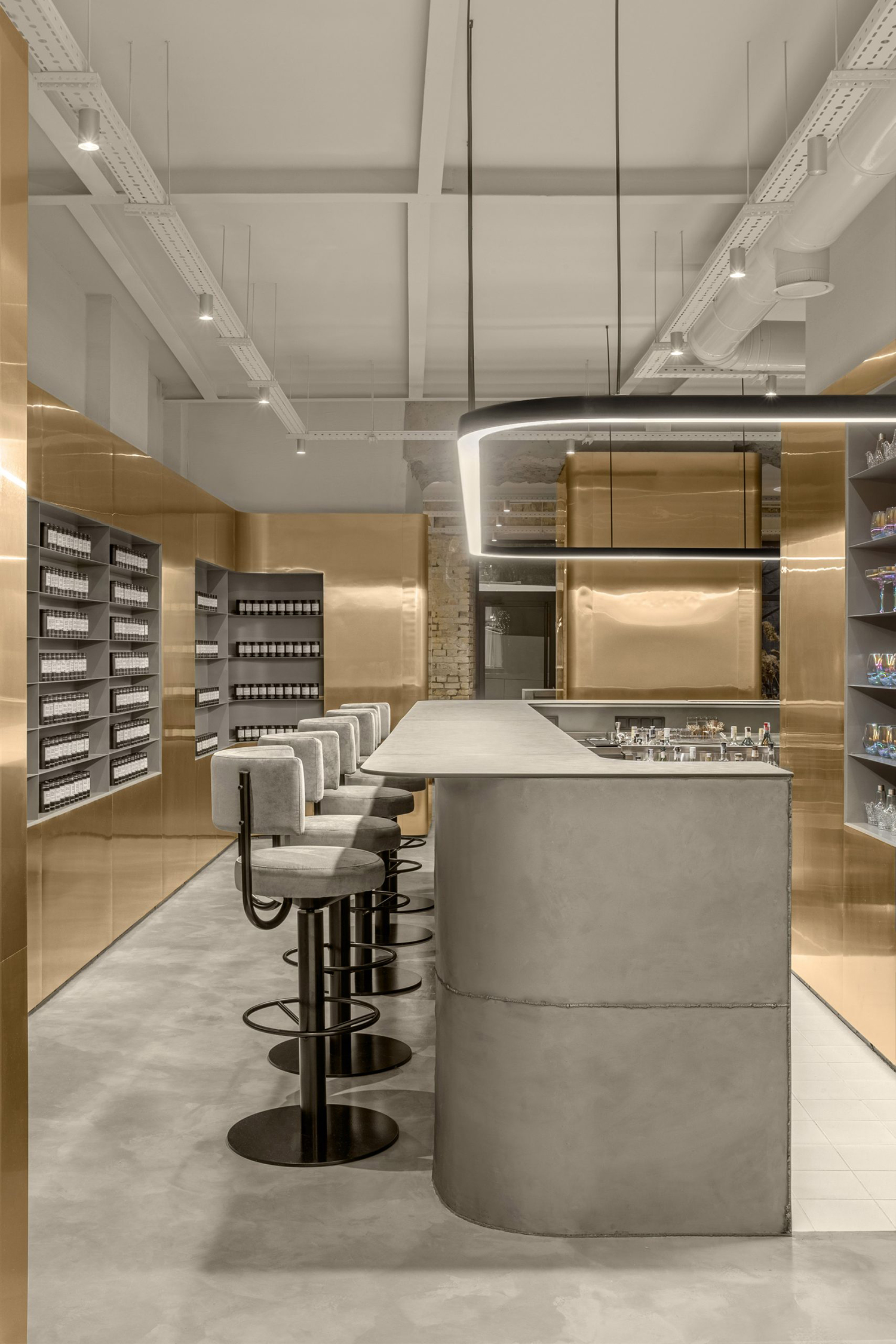 One of the main visual accents of the salon is located in the reception area and creates an instant wow-effect in visitors. The cast-in-situ concrete ‘broken’ arch serves as a metaphor for broken stereotypes in the beauty industry. The construction of this form was a multi-phased process; it took more than 4 months from the docking assembly to the final joining of shears and toning of the structure. The reception counter is also made of cast-in-situ concrete and visually resembles a stone block. However, the monolithic look does not impede its functionality – it has a desktop and plug-in connection spots to ensure a fully functional workspace. The reception zone has a lounge area with furniture groups and a fireplace that serves not only as a waiting area but also as a place to socialize during cocktail parties. 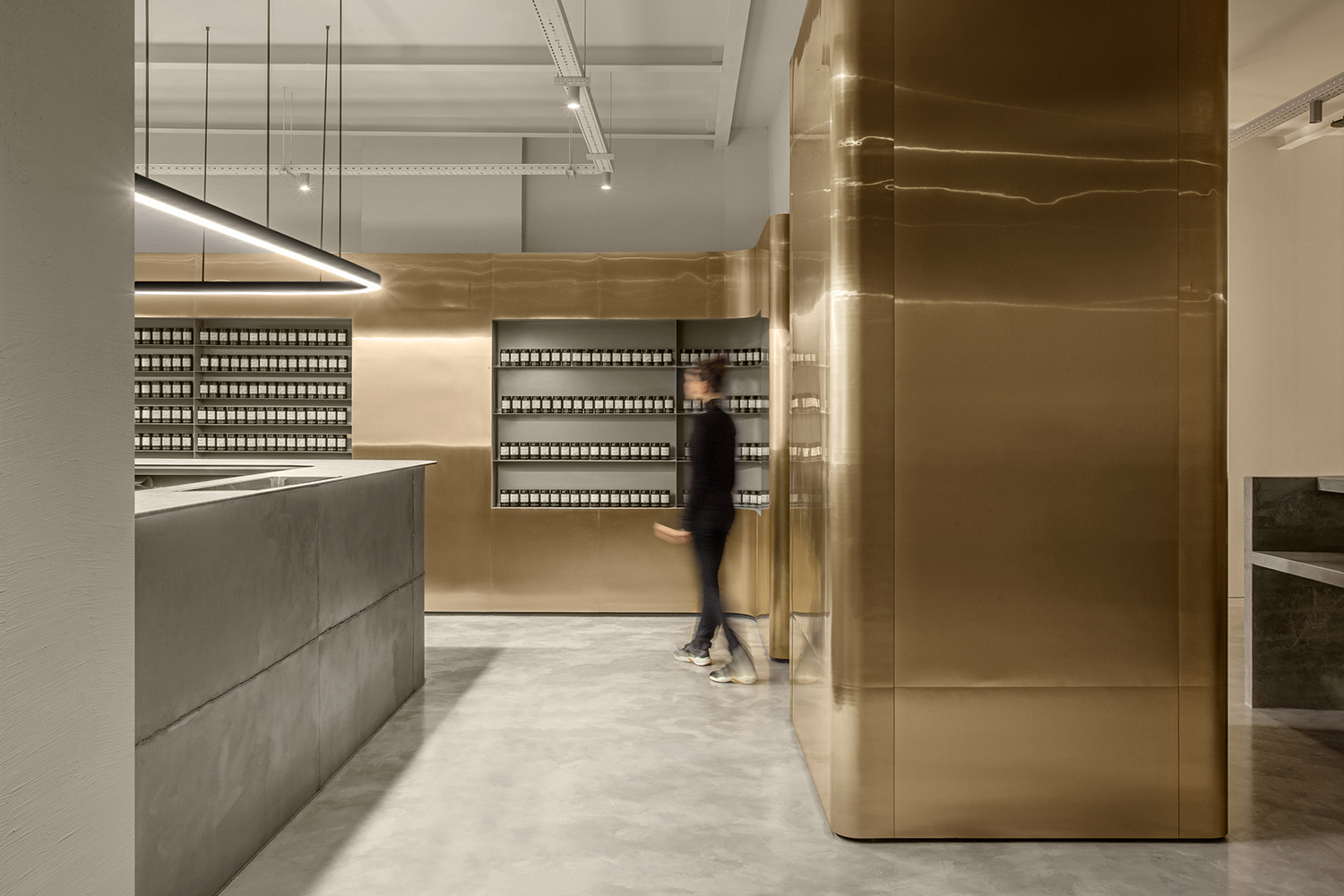 Another main element and a signature mark of the interior is a set of the rounded ‘golden’ panels. Their shape envelopes the walls and columns and visually joins 3 zones: the entrance to the salon, the bar, and the pedicure zone. The panels are used in retail operations, serve as bar shelves and partitions, and mask the unevenness of the original walls. Panels are made of polished stainless steel (0.5 mm thick) with titanium nitride coating. The bar counter is plated with black metal with crude welding seams made intentionally prominent. The top of the bar is made of a 12-mm thick composite material. 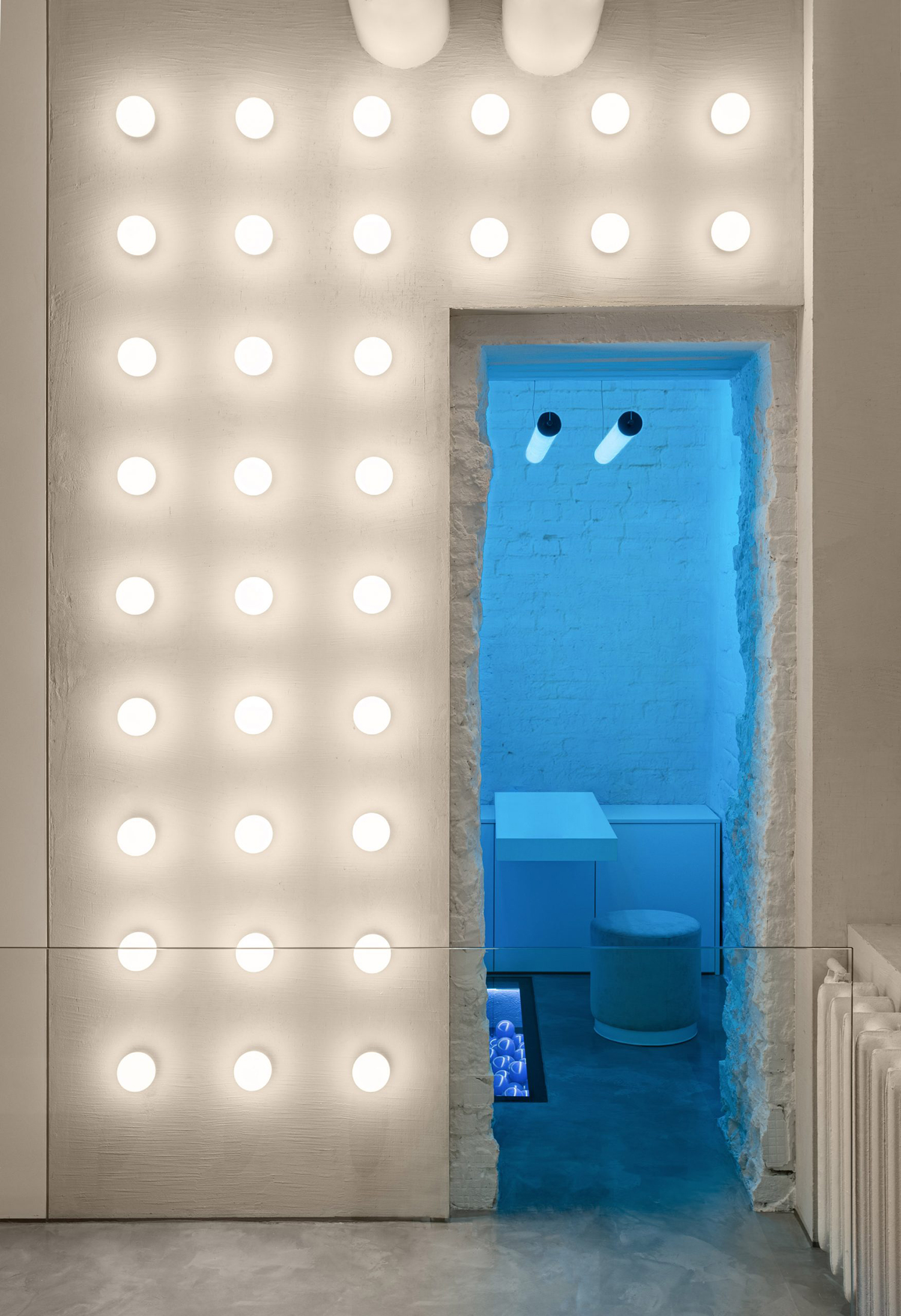 The pedicure zone is located on podiums the ergonomics design of which is a perfect fit for nail technicians. Podiums are equipped with integrated sliding drawers and washbasins for the use of the salon staff; during parties, they are covered with hollow coffee tables. In the middle of the zone, there is a free-standing washbasin that was assembled from two Soviet-era baby bathtubs. Overall, the pedicure zone is finished in light tones with contrasting golden accents, giving it a feeling of cleanness without a sterile look of an operating theatre. Designers managed to achieve the ‘Berlin of the 60s’ effect. 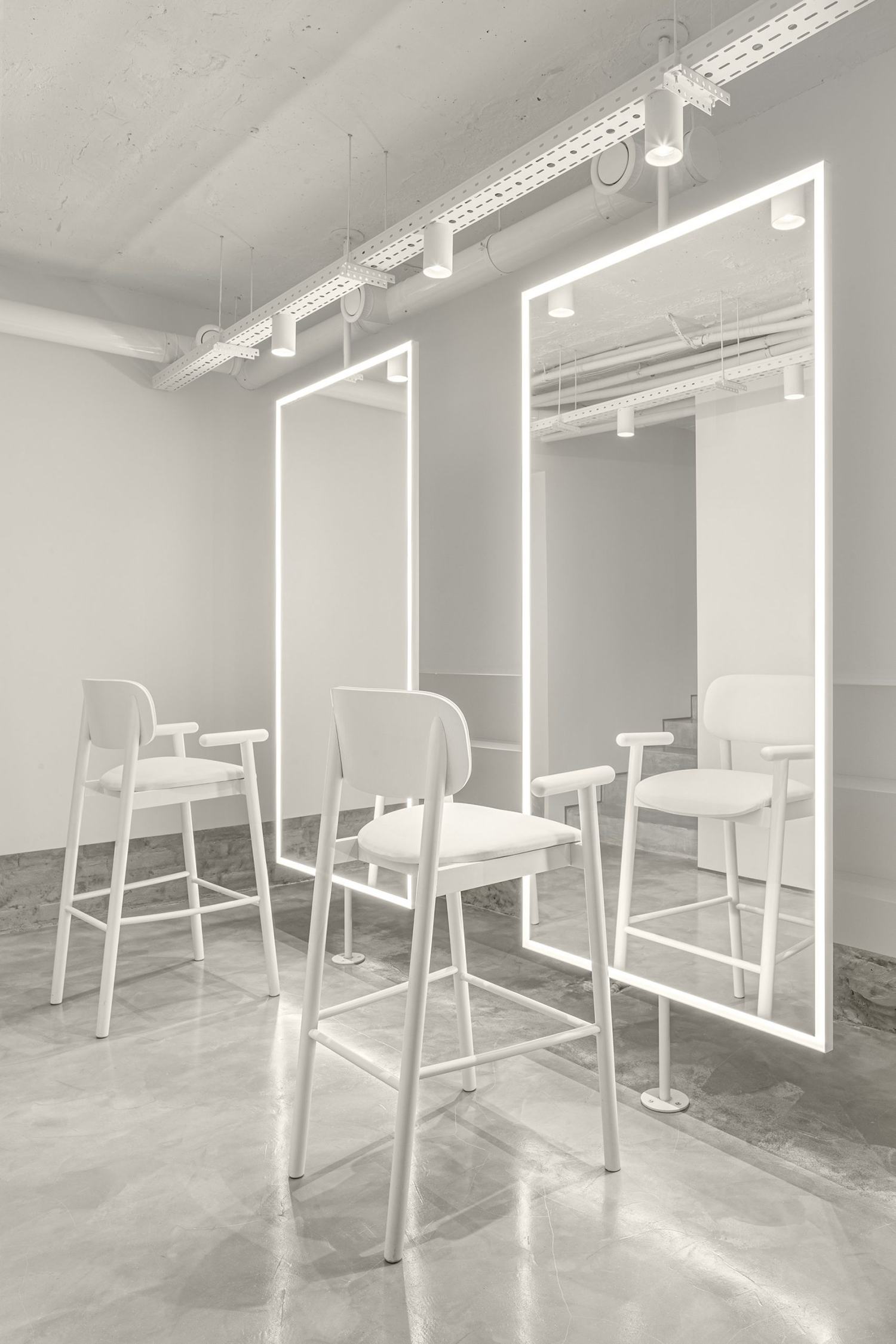 The passage that leads to the nail art zone has a hanging hammock chair, which has become a favorite Instagram spot of the salon visitors. A 2-meter deep water basin was discovered in the nail art room during the leveling of the concrete screed. Balbek Bureau’s team decided to keep this unique feature, filling it up with balls the color of the landing; a glass floor was assembled on top of the basin.

Salon’s ‘-1’ level is located on the basement floor. Given the lack of natural light, low ceiling height, and small square area of the premises, the entire floor has been finished in white, with the maximum use of mirrors, which visually made the space look light and airy.