URWERK has unveiled the EMC TimeHunter in its White ceramic version aka ‘Stormtrooper’. The EMC White Ceramic aka Stormtrooper was an easy nickname to choose, from Martin and Felix’s love of sci-fi and in particular, Star Wars. The universe that George Lucas built have heavily influenced the design of URWERK timepieces over the years.

The signature armour of the Stormtrooper was an instant icon ever since it blasted onto the scene in 1977. Designed for Lucas by Ralph McQuarrie, a conceptual artist who also worked on Battle Starship Galactica and E.T.  The Stormtrooper was designed to intimidate but also look super cool and super clean.

The EMC Stormtrooper evokes the same characteristics. The whole watch looks like it belongs in a sci-fi movie, and for this limited edition the white ceramic case set it apart from the previous models, indeed all previous URWERK. Gone is our trademark black look, as we embrace white for the first time! 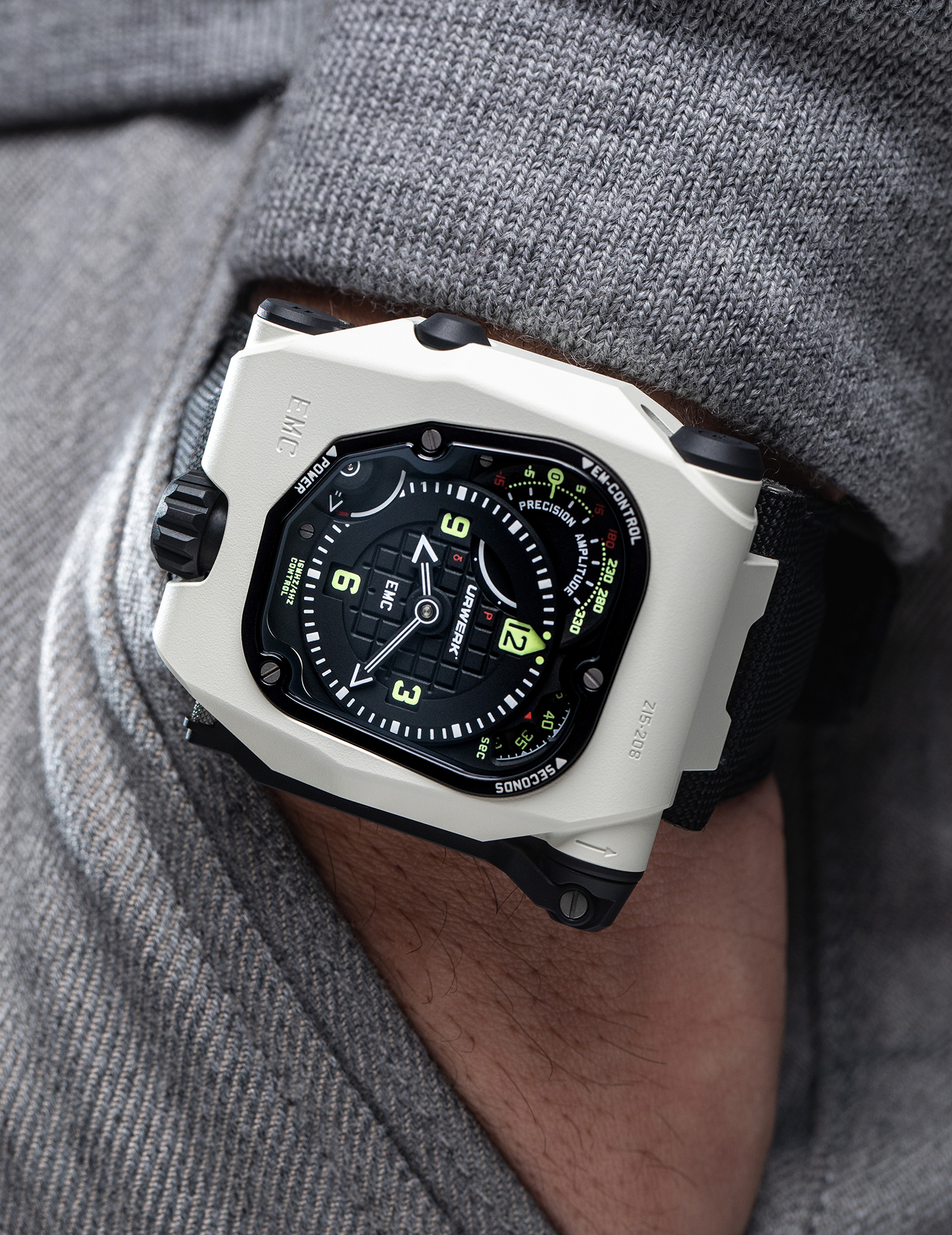 The EMC TimeHunter “Stormtrooper” belongs to the UR-Chronometry family, which encompasses URWERK watchmaking concepts dedicated to outstanding precision. They indeed offer the unique possibility of measuring and adjusting the rate of their movement.

An EMC TimeHunter is essentially a dual measuring instrument. Like a compass, a sextant, a machine tool, its appearance and even its surface all signal its nature. The EMC “Stromtrooper” is crafted from steel and its caseback from titanium. Its aesthetic is not round, square or cushion-like, nor indeed any of URWERK’s signature indefinable shapes. This hyper-technical “machine” hugs the contours of the ‘motor’ inside and submits to the constraints of its various organs. It is not symmetrical, regular, flat or curved, yet remains aesthetically pleasing and distinctive. EMC’s design obeys its function, transcending existing rules to create a unique personality.

Moreover, its stainless steel ‘hood’ is micro-beadblasted and then given a hard, matt ceramic lacquer-type treatment. As a result, the surface of the EMC TimeHunter “Stromtrooper” has a grainy finish reminiscent of military equipment. 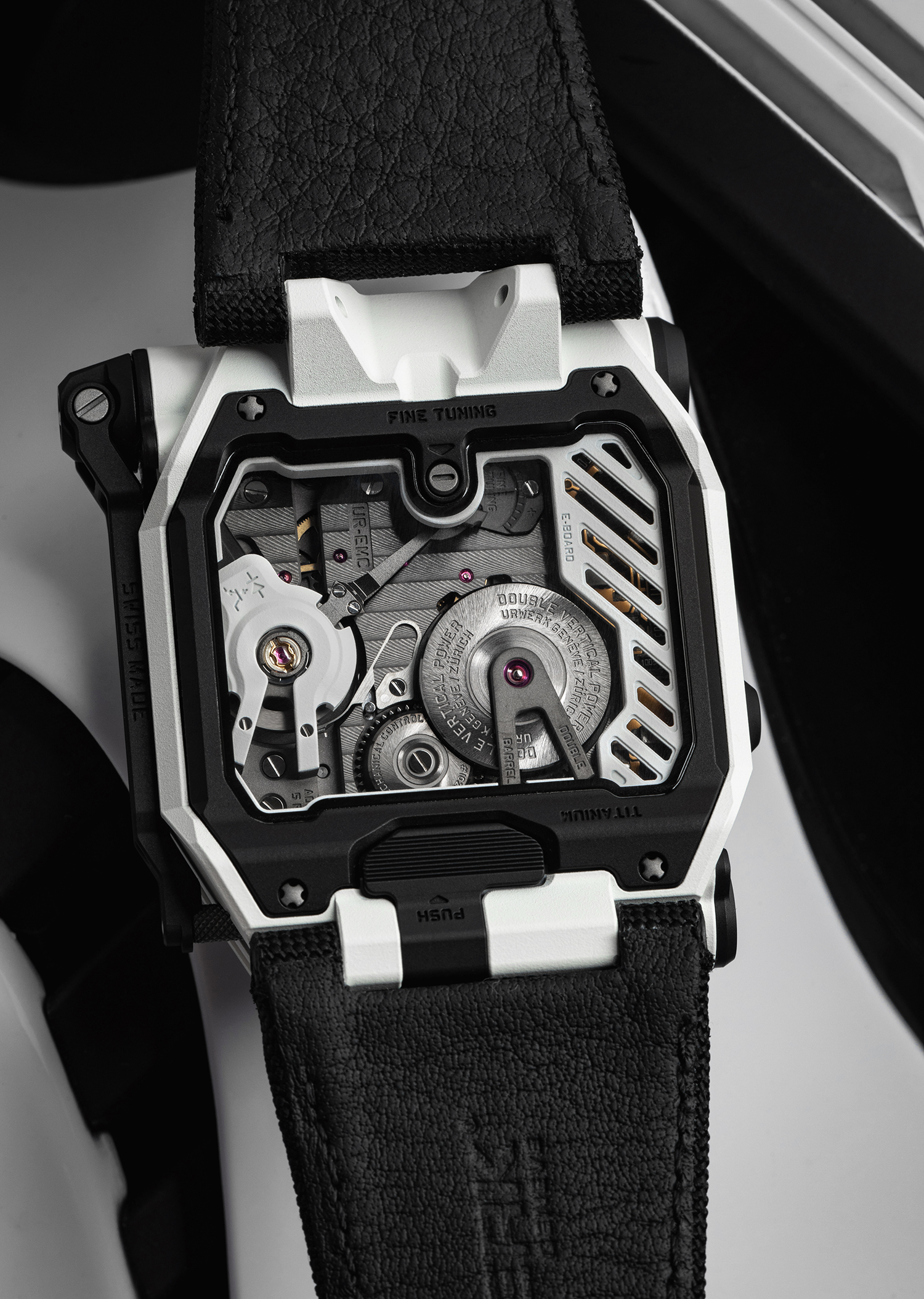 The same functionalism reigns supreme on the dial with its matt black surfaces. Each indication zone has its own clearly marked space. Each unit is painted with fluorescent green Super-LumiNova®, a neon-type colour frequently used by URWERK due to its perfect contrasts. In addition to the main dial with its chequered hand grenade pattern, which displays the hours and minutes, the EMC TimeHunter features a small disc-type seconds hand at 1 o’clock, graduated in five-second increments and located at 1 o’clock. It is complemented by a power-reserve indicator at 7 o’clock, which provides information on the state-of-wind of the hand-wound movement offering a maximum 80 hours of autonomy.

The indications linked to the chronometric (precision timekeeping) monitoring function are concentrated at 11 o’clock and indicated by the “EM Control” marking on the screw-down bezel. The rate accuracy is graduated from -15 to +15, using seconds as the measurement unit for the daily rate deviation. The amplitude ranges from 180 to 330, measured in degrees. 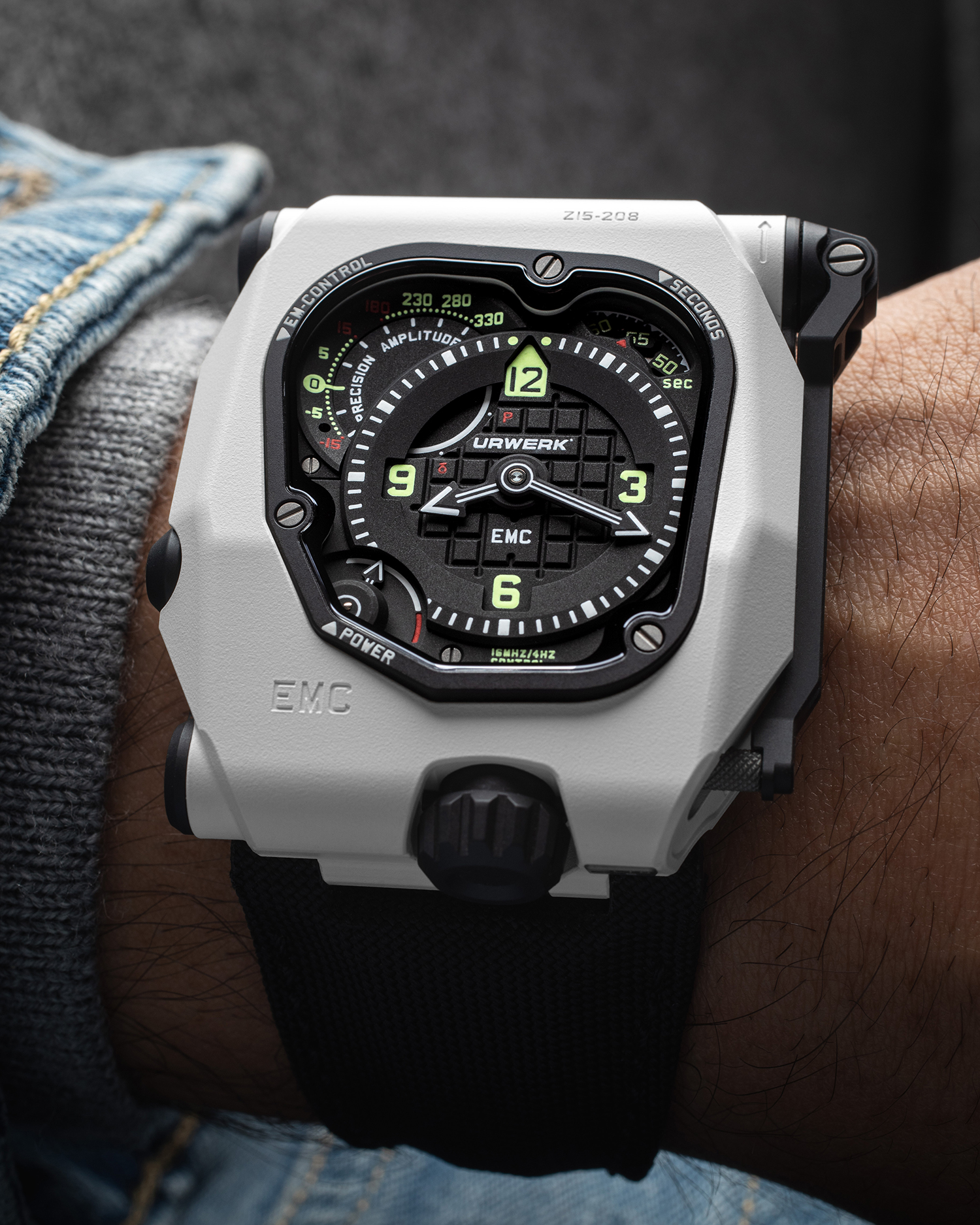 At the very heart of the EMC concept lies an electronic/mechanical system that makes each of these timepieces totally one-of-a-kind, bestriding two worlds. It is an entirely mechanical watch, optimised with the help of an electro-optical circuit. On the one hand, its hand-wound movement stems from the mind and hands of URWERK. Designed exclusively for the EMC collections, the UR-EMC2 calibre is entirely crafted, finished, assembled and adjusted by URWERK.

On the other hand, it incorporates an electronic module whose function is to measure the rate of the mechanical part. It has its own power source, separate from the rest of the movement. Positioned on the side of the case, a large retractable lever raises a dynamo which feeds the control micro-circuit. Thanks to its laser diode, it is able to collect two essential data relating to the movement. Pointing towards the balance, it reads its amplitude (an indicator of the movement’s state of health) and the rate deviation (which is an indicator of accuracy), while comparing them to an internal clock. The latter takes the form of a processor operating at a frequency of 16 MHz and serves as a reference oscillator, i.e. a benchmark. 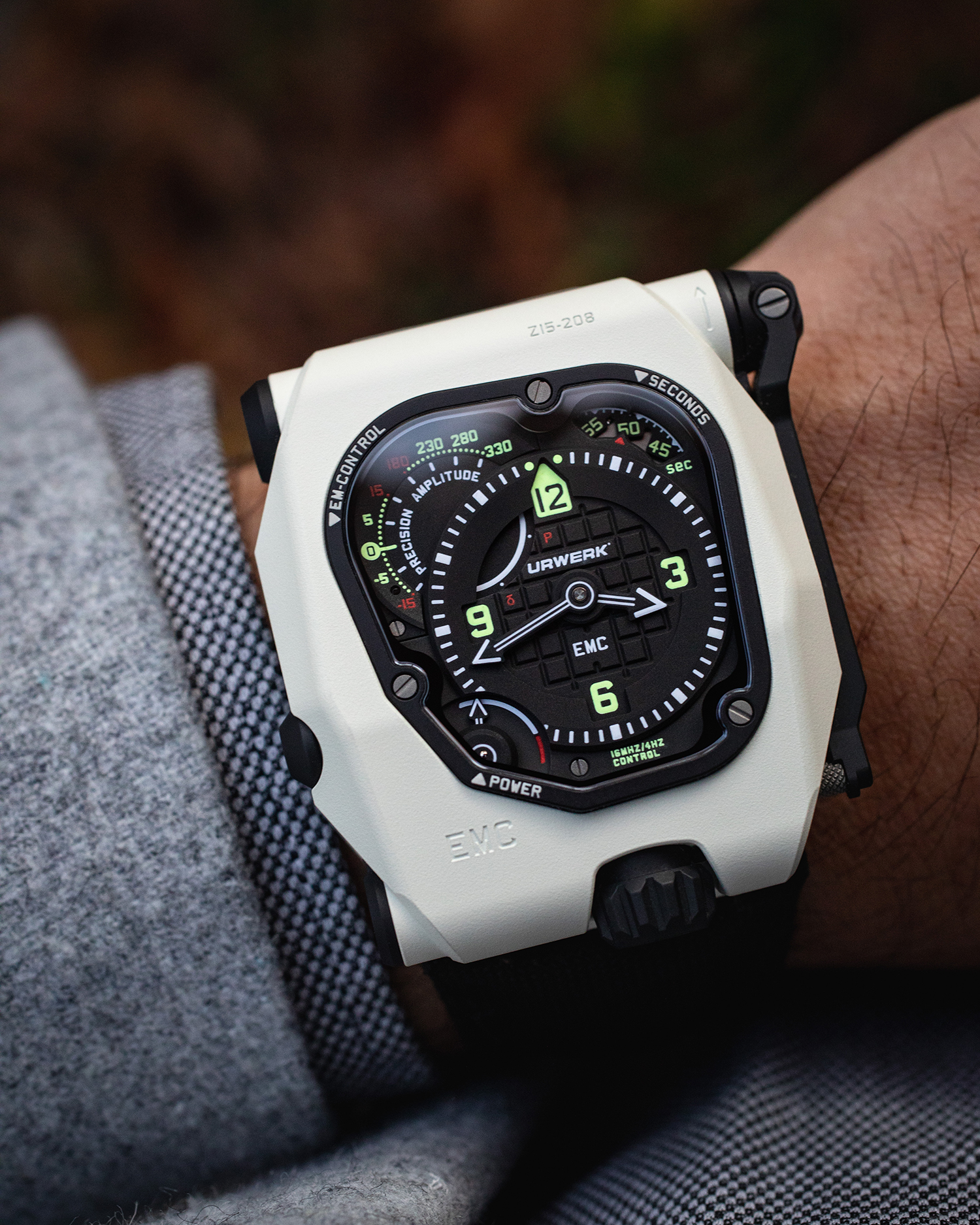 On one side, the ‘engine’; and on the other, the control unit. Yet these two entities are not sealed off from each other, quite the contrary. They are integrated, nested and URWERK has created a means of access to both that makes EMC TimeHunter the world’s only truly wearer-adjustable watch. A timing adjustment screw makes it possible to manually fine-tune the oscillation speed of the balance and thus to correct the variations in rate that inevitably appear over time and are intimately dependent on the use made of the watch by its wearer. This corrector is located on the back of the watch and is duly indicated by the engraving “Fine Tuning”. It manages the behaviour of the movement at its very heart, by modifying the length of the regulating balance-spring.

More than just timepieces for precision watchmaking fanatics, more than just interactive objects, more than hybrids combining the best of mechanical watchmaking with the possibilities afforded by microelectronics, EMC TimeHunter “Stromtrooper” watches are truly living timepieces. While they were admittedly born within the URWERK circle of horology and design geeks, the purely scientific approach gives rise above all else to truly inimitable watches. Ultra-legible, razor-sharp and hyper-urban, each one transcends its functionalities to enter the realm of pure style.