MOC Design Office combines different materials and textures on an overall black marble base to create a bold visual identity for Oscar Cinema in Zhengzhou, China. The white geometric forms are placed in the lobby space in an overlapping and interlocking pattern, some even twisting. The distinctive textures of Nero Marquina marble and black cross-grained aluminum panels spread across the three-dimensional space, giving the cinema hall a rich variation of paths and leading people into the unreal time. 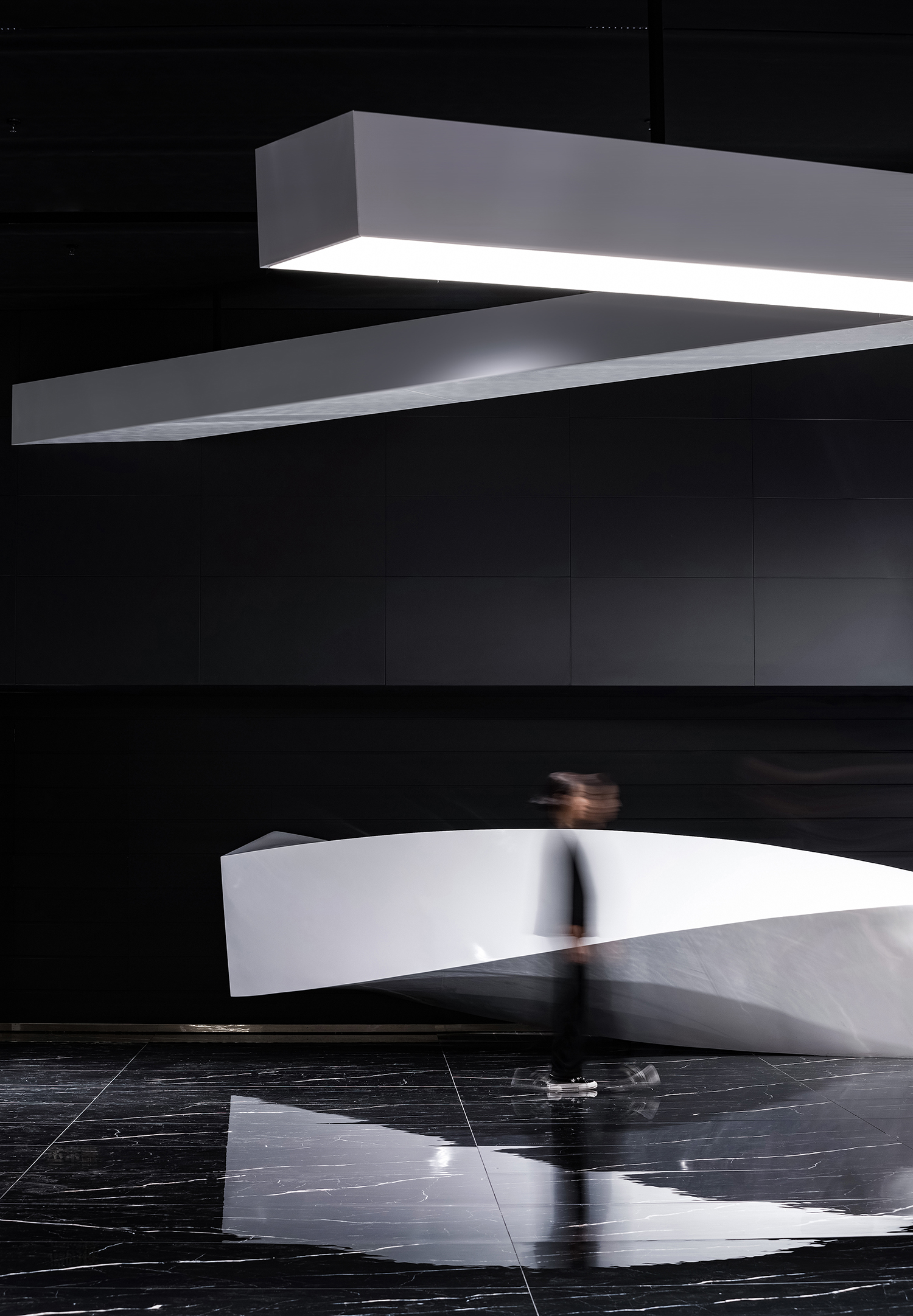 The aesthetic tension under the fusion of colors and forms cuts through the silent black space, allowing the frozen time to flow from the turning point. The creation of light determines the appearance of shadows, which emerge faintly under the combination of black and white.

Clear contrast is used to emphasize the focal point of the scenes in the area. The waiting area is decorated with a sequence of cube-shaped display cabinets, which adds mystery, fashion and futuristic qualities to the space as a whole. 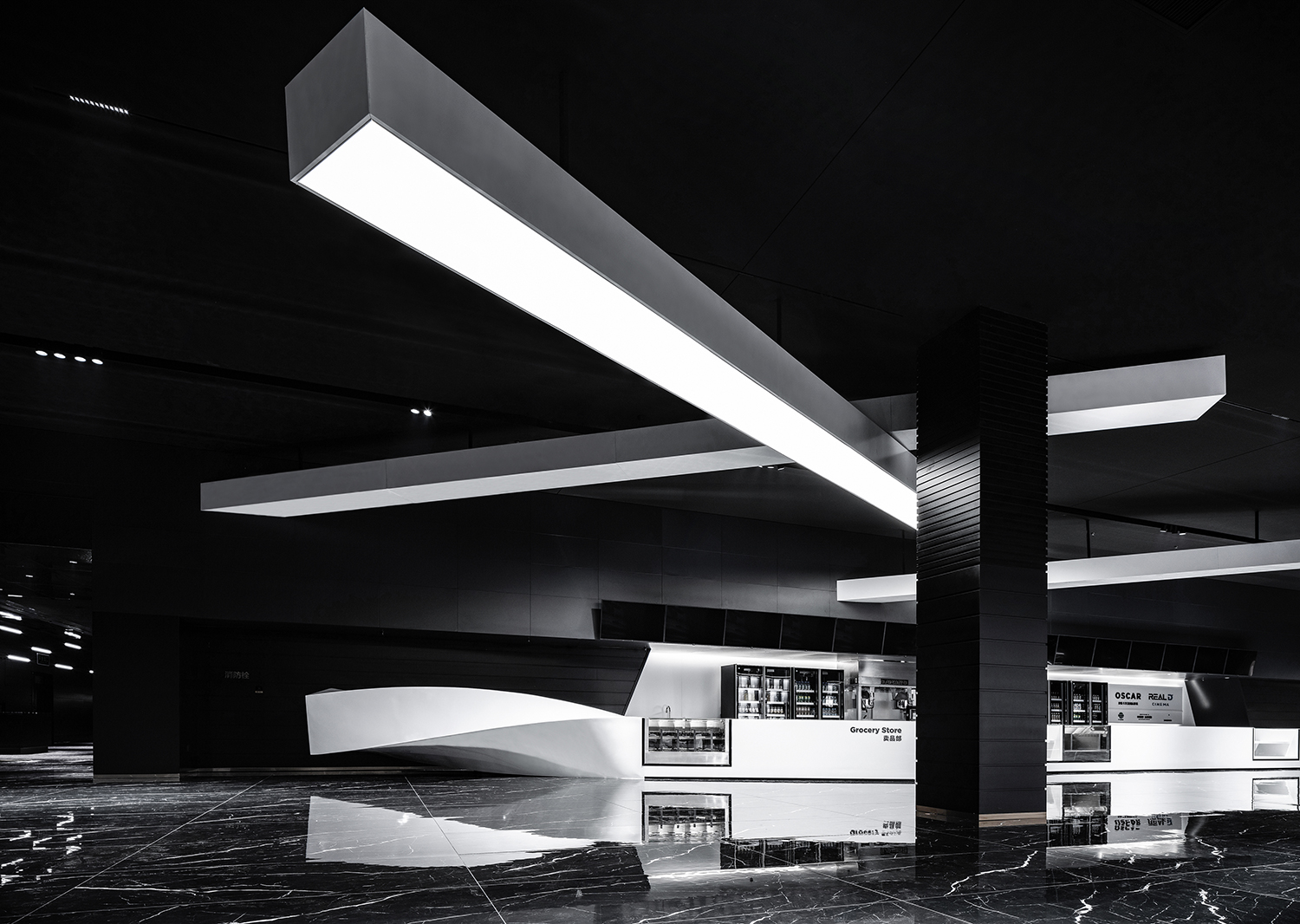 Into the main hallway, lights installed on both sides of the walls are like meteors. The ceiling made from black mirrors expands the space with the reflection, which appears to be a futuristic time tunnel in the dark background. The strong directional lines on the floor extend to the end, providing the viewers with a visually dynamic experience while guiding them along the way. 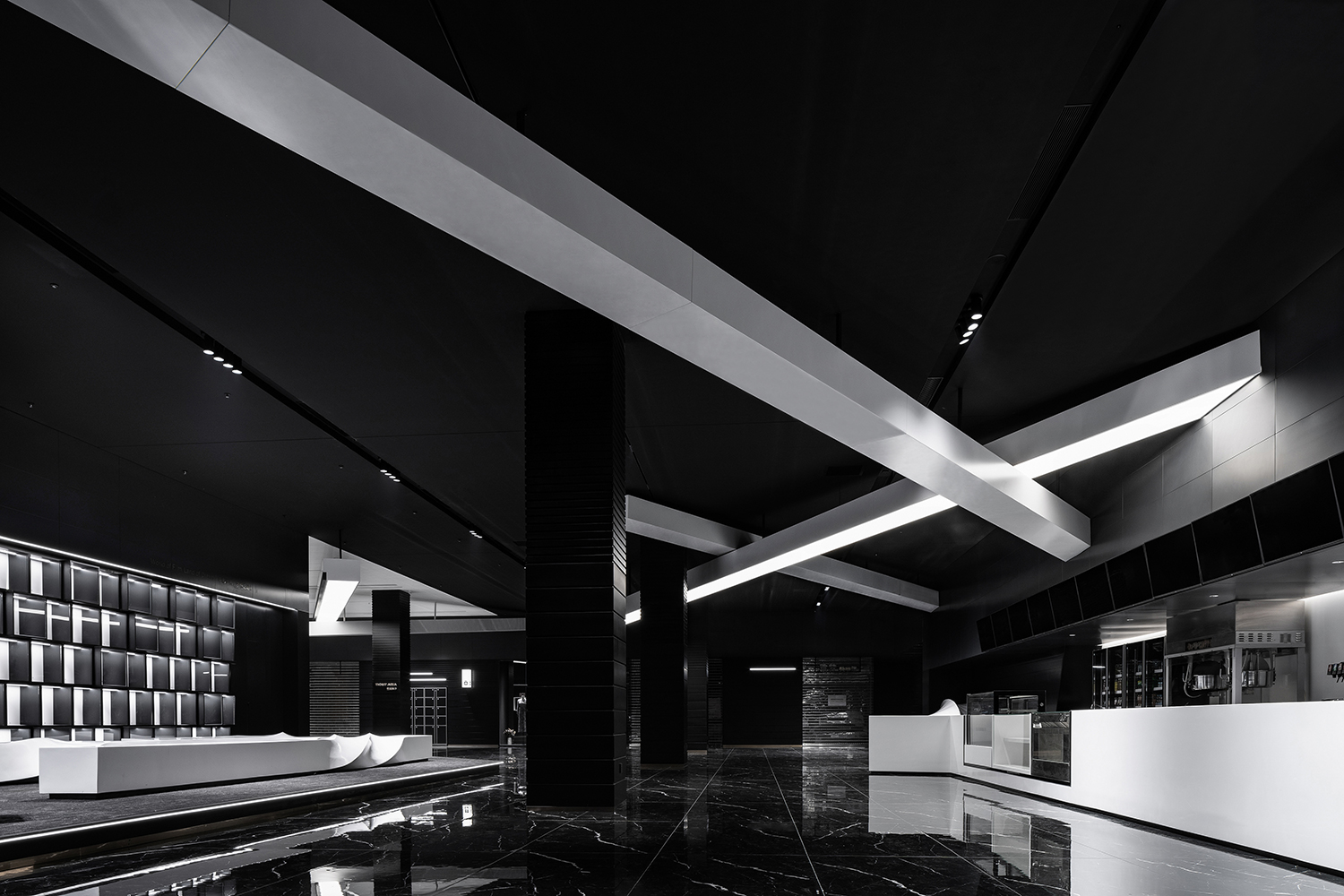 The geometric elements of the lobby are also combined in the hallway, which evolve in conjunction with the vertical spatial scale. In addition to its function of guiding the viewers to the entrance of the theater and directing the various functional spaces, the hallway also provides the transition of spatial style. 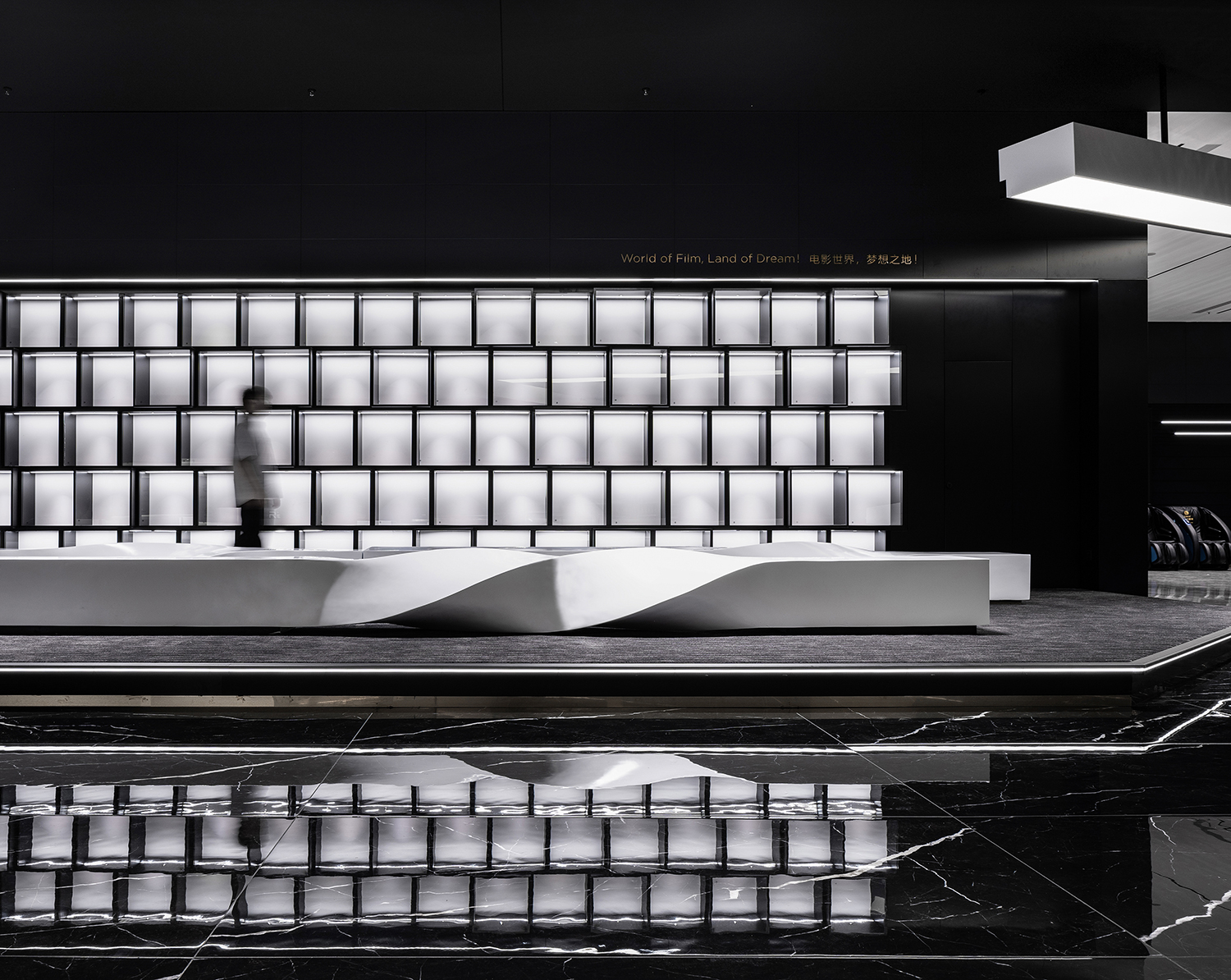 In order to create a cinema environment that blends the visual and aural senses, and to provide a fully immersive viewing effect, the interior of the theater hall has a complete ring in symmetrical shape running through three sides of the space, and lighting is used to strengthen the lines of the outer frame, resulting in a scene that combines modern technology and art. 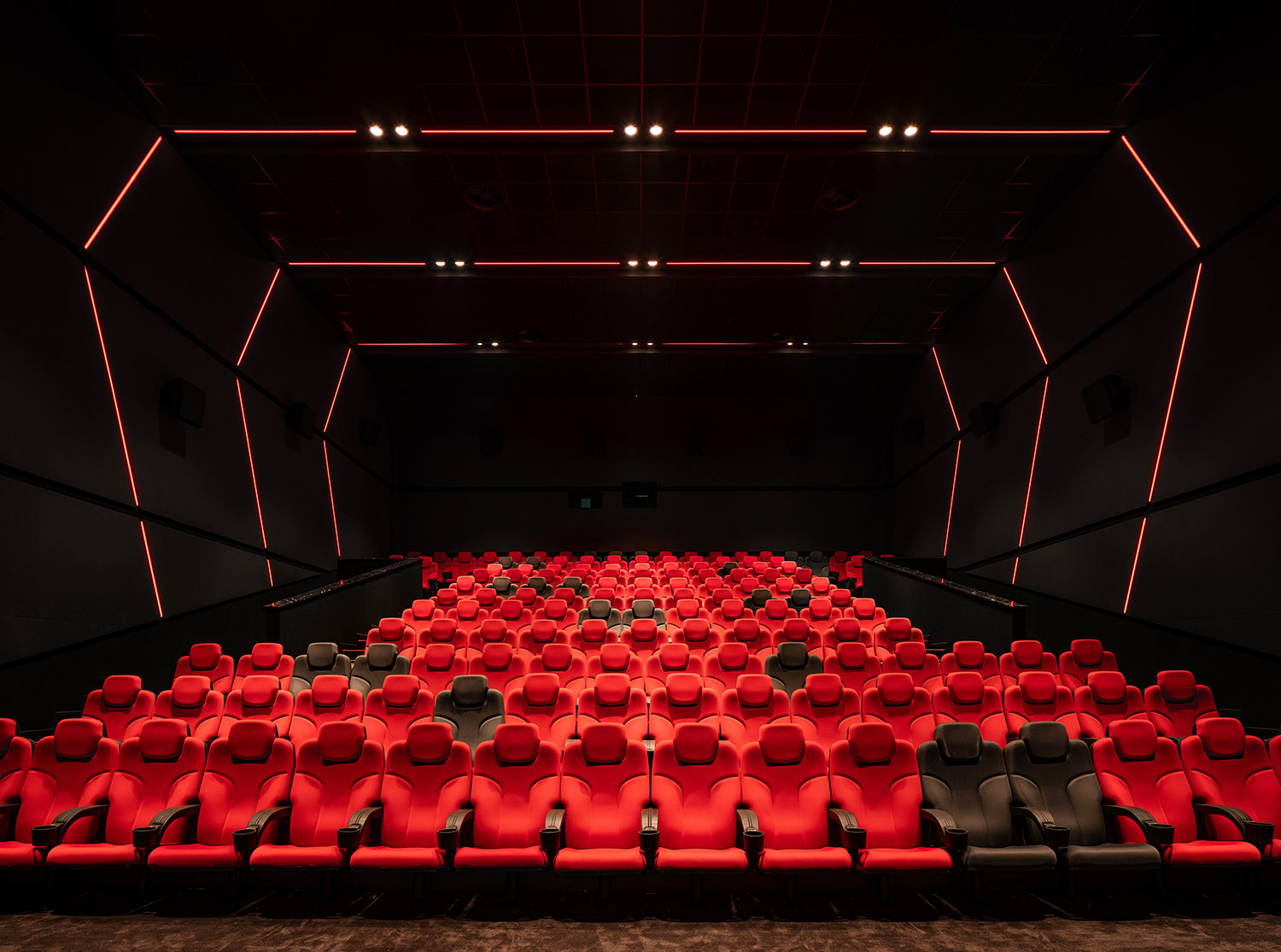 A variety of color themes highlights the qualities of the cinema hall, where one story after another plays out as it’s scheduled. It’s a place for the emotions that can’t be released in the real world. Views cry and laugh as the film story unfolds. The ultimate charm of cinema is to bring back the beauty of life and heal the broken heart.