Ukrainian practice YOD design has recently completed Samna, a restaurant of Middle Eastern cuisine in the author’s interpretation by famous Israel chef Meir Adoni. The venue is located in the historic part of Kyiv, next to Arsenalna square. The restaurant occupies the basement and the ground floor of the building that used to be a mansion erected in 1797 and called “Ypsilantis House.” An important Turkish statesman lived here at the beginning of the XIX century when he escaped to Kyiv after the failure of the rebellion he had participated in.

The curious fact is that this building went significantly into the ground since it was constructed, and the ground floor became the basement. The windows which overlooked some Kyiv street now make niches below the ground. 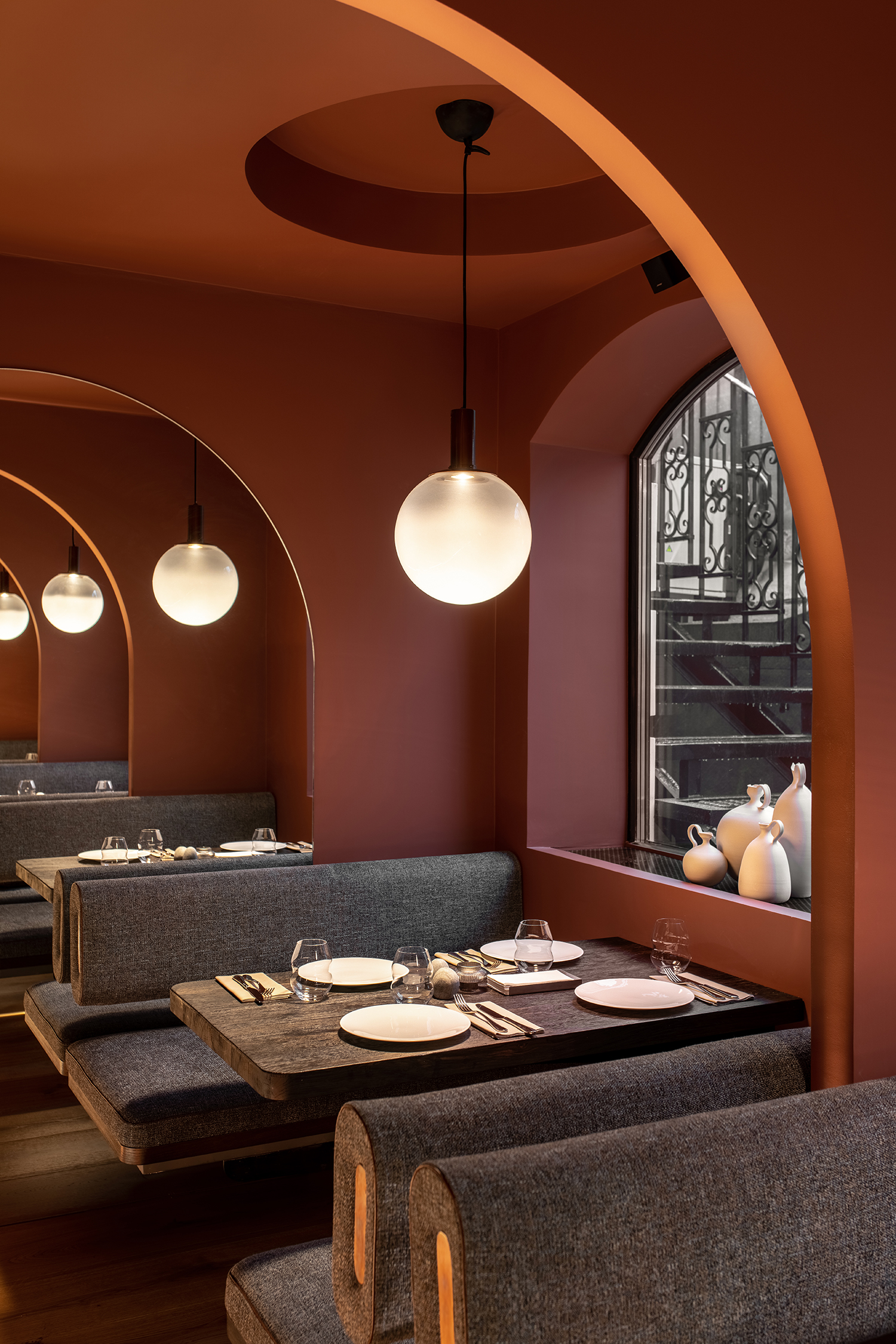 Solid brick walls and arc domes define the aesthetics of the venue. The designers just emphasized some authentic elements and created on their basis a new contemporary interior. They had to hide all engineering systems to manifest the unique character of the place. You can not see any wire or cable inside Samna’s halls.

The restaurant has 5 halls and about 120 seats. Guests start their journey in the hall with a welcome bar where aperitives are served, then they go to one of three main halls with set tables. After the meal, they could hang out in a hall with a copper bridge, a DJ on the balcony, and a bar mixology. It is a perfect place for communication and seeping into the vibrant atmosphere of Samna. 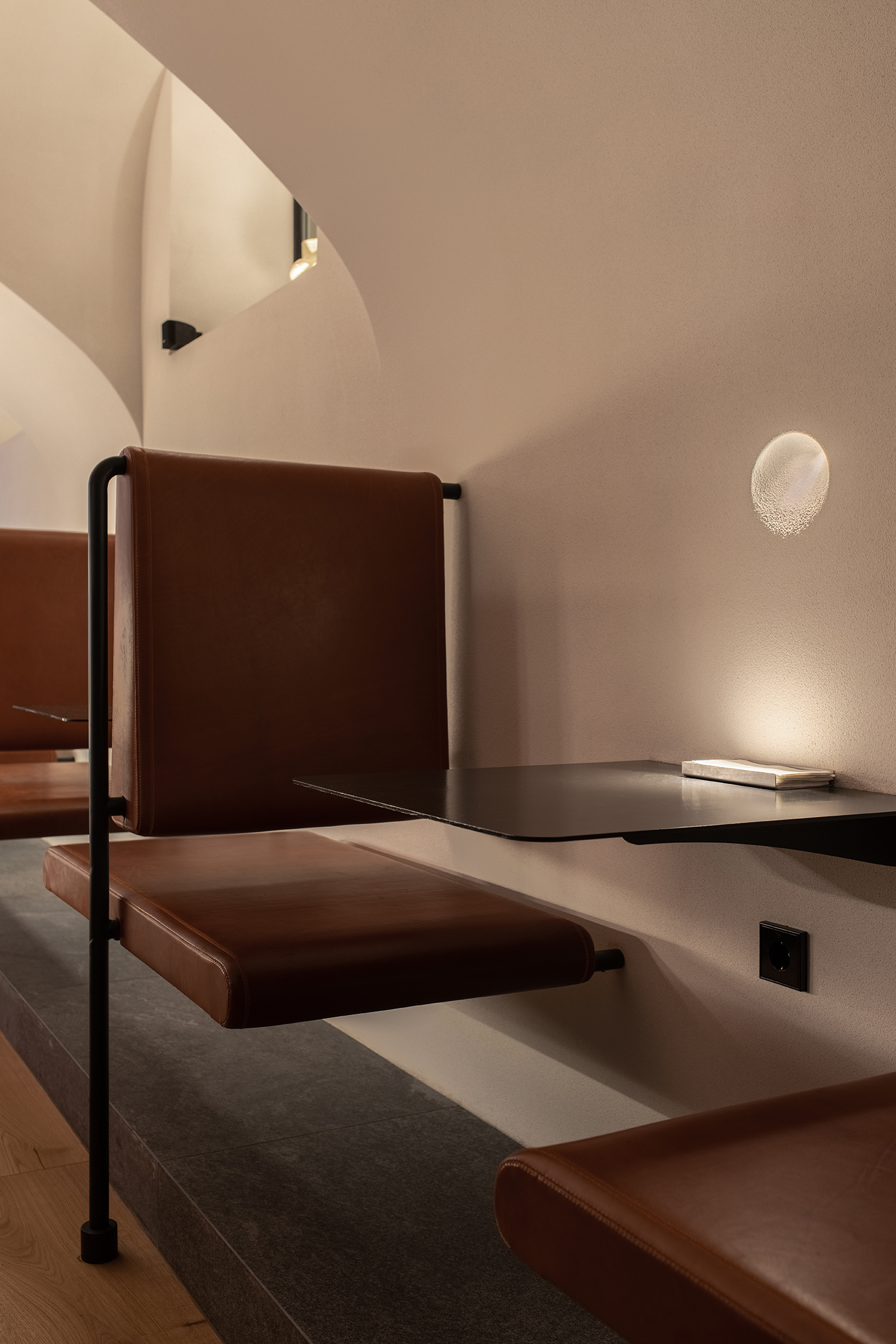 There is plenty of copper in the restaurant’s interior. It emphasizes the nobility of the place and works as an impressive contrast with laconic shapes of a bar island, console tables, and a shelf with glasses hanging above the counter on steel ropes.

The soft shade of copper is also present in the restaurant’s illumination. Spotlights’ streaks reflect from the copper plates hung under the ceiling and ray to the tables. Such a structure of light provides an effect of a rich and warm beam which enlightens the space most comfortably and never blinds in guests’ eyes. 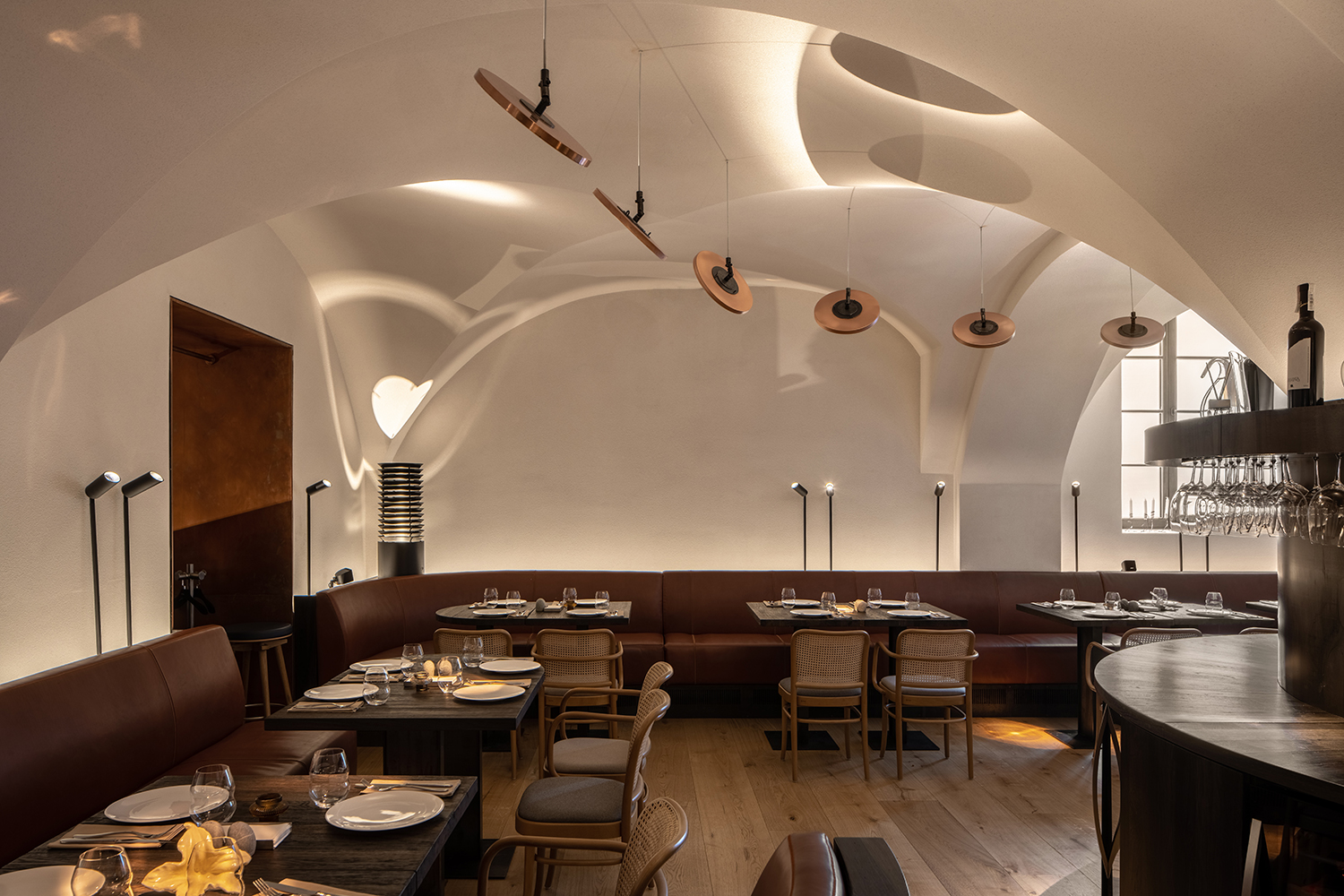 Besides copper in the interior, you can see solid oak, leather, and steel. Designers chose them as materials that were wildly common in when the “Ypsilantis House” was flourishing. Walls are partly daubed with plaster and partly kept with their original bold bricks.

One of the restaurant’s halls is devoted to vine. Glass cupboards in its perimeter symbolized terroirs, lands that have an impact on the character of vine. The image of the ground was printed on the glass facades of cupboards. In the top part, it becomes translucent, and we can see wine bottles that metaphorically grow from that ground. 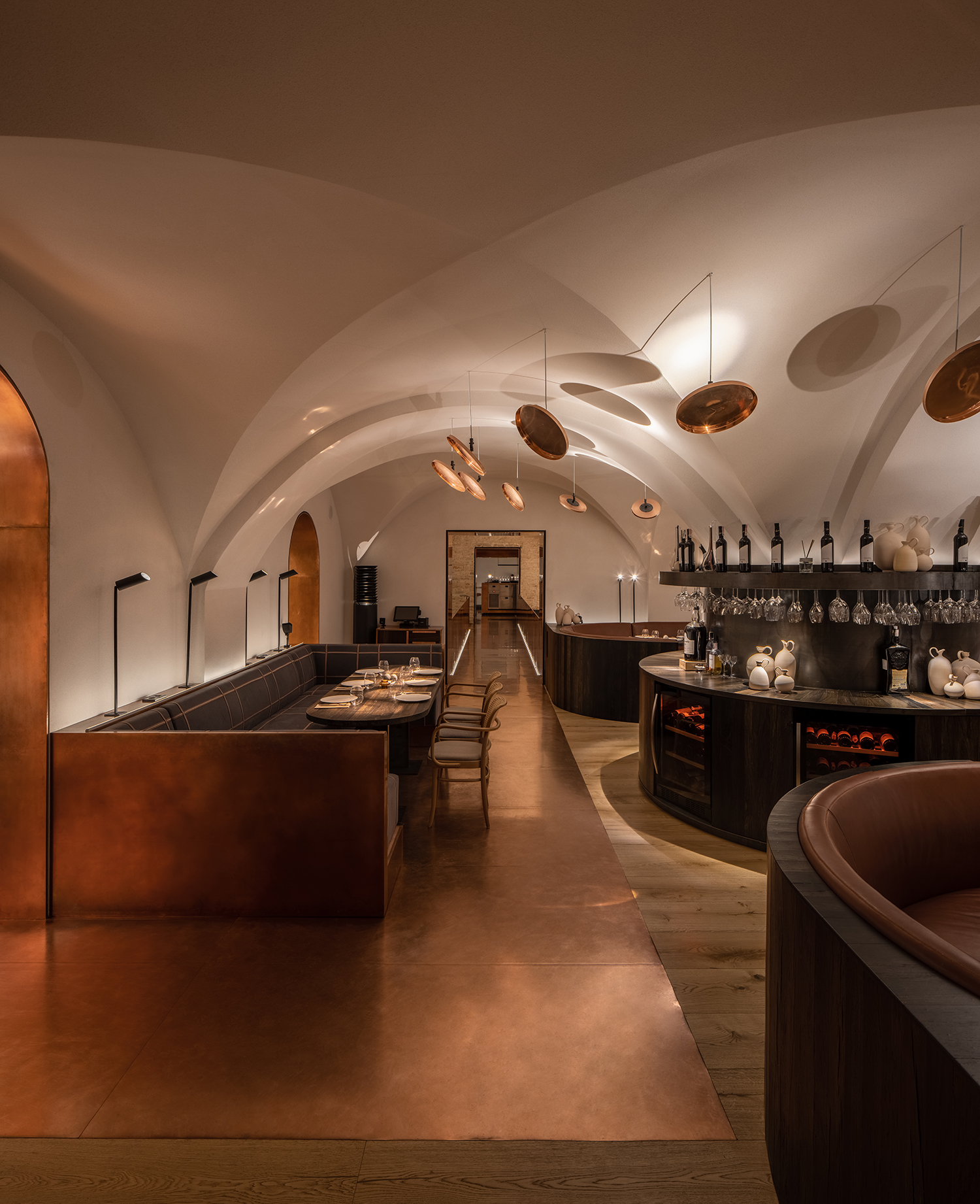 “Old buildings talk for themselves,” says co-founder of YOD Group Volodymyr Nepiyvoda. “They demand some respect and restraint from a designer. One of the challenges for us was arranging communication systems that are necessary for any modern restaurant. But none of them existed when the house was built, and that is why they would look foreign on those walls. We solved this problem in favour of authentic architecture and pure walls.” 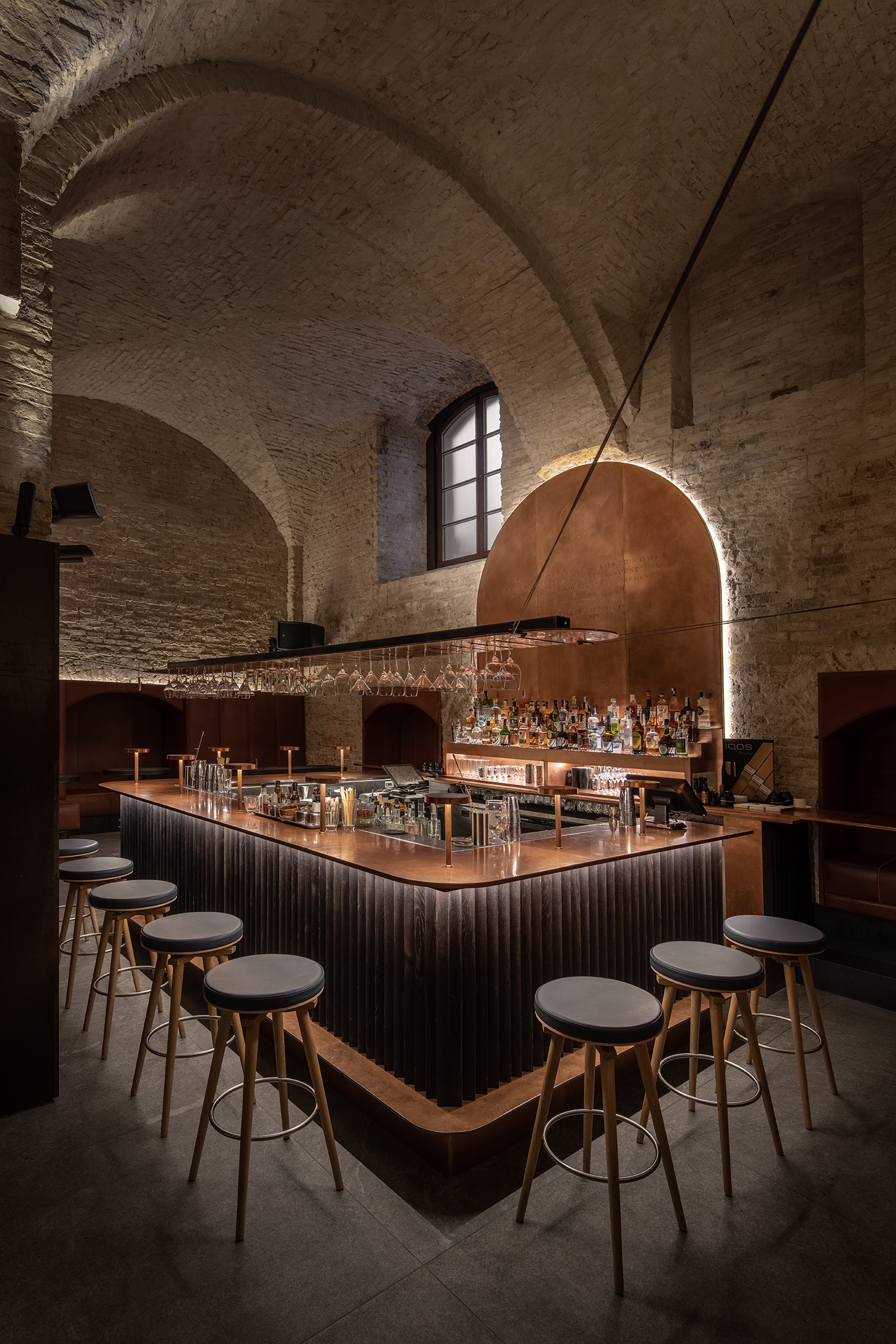