Green onyx lines the floors and walls of the new Forte Forte store in Rome by creative duo Giada Forte and Robert Vattilana. The boutique is located on Via Borgognona, a street in the heart of the Campo Marzio – the 4th rione, or district, of Rome – that was once full of artists. 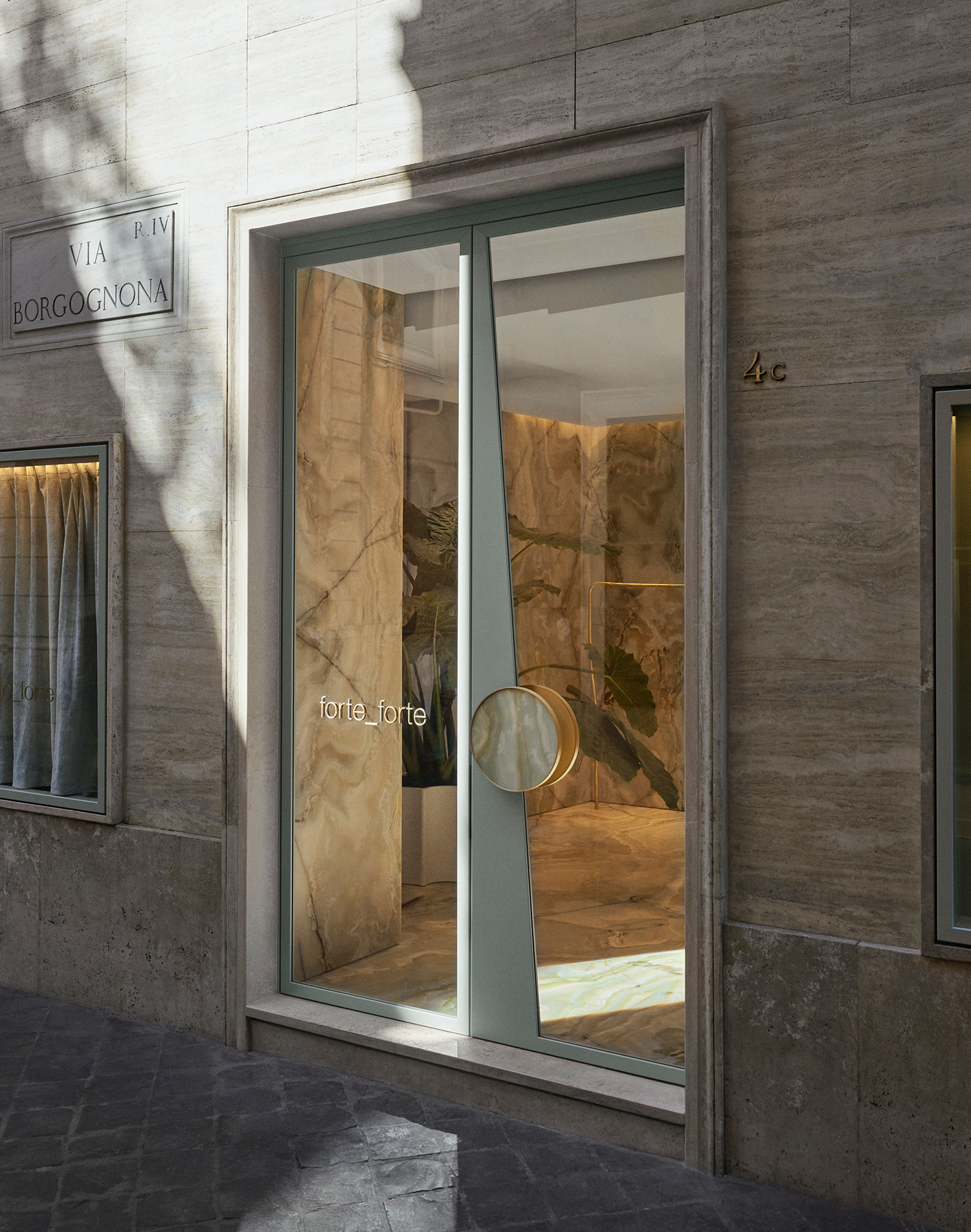 The boutique looks like a vibrant monolith of green onyx, a precious material with a unique design that contains a thousand-year history. The green onyx, which thanks to the particular mineral structure dematerializes in contact with the light in nuanced transparency. It is a stone that comes from Afghanistan, an area of extinct volcanoes, and whose history is at least as long as that of the city. 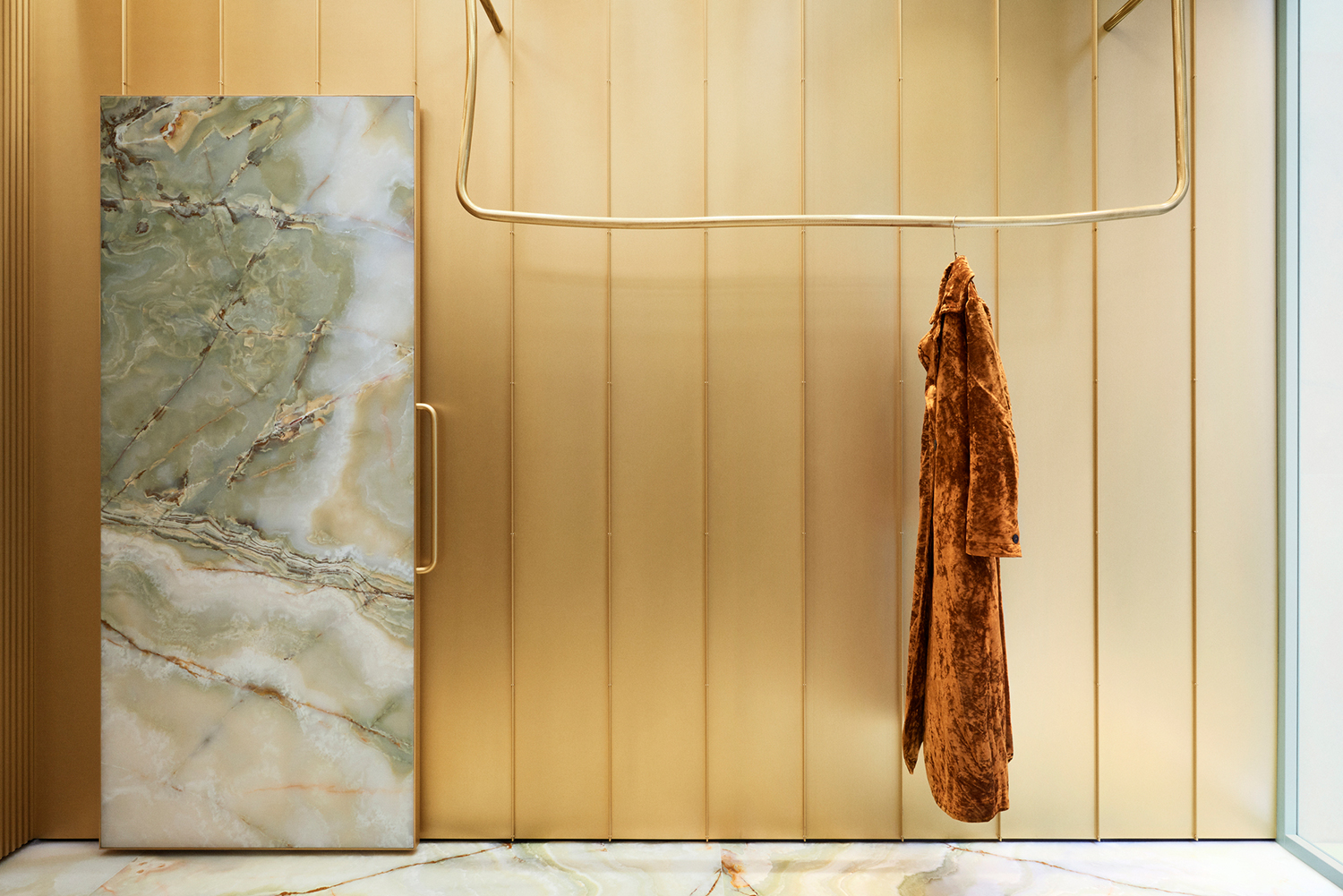 Treated in large symmetrical blocks and worked to obtain a matte surface, green onyx creates a total immersion in the shop: it drowns the entire space, from floors to walls. The entire perimeter of the scenic box is illuminated and marked by a cascade of light, while panels of polished brass folded in on themselves and anchored by brass stitching make up the back wall. In contrast, the ceilings are white in the initial part of the shop, with inclined and dynamic bands, while in the second they open in a geometric composition of luminous portholes. In such an affirmative space, the dressing rooms closed by brass hinged doors opened by portholes are a mysterious presence, which reveals feminine, boudoir–like interiors in sage-colored capitonné velvet. 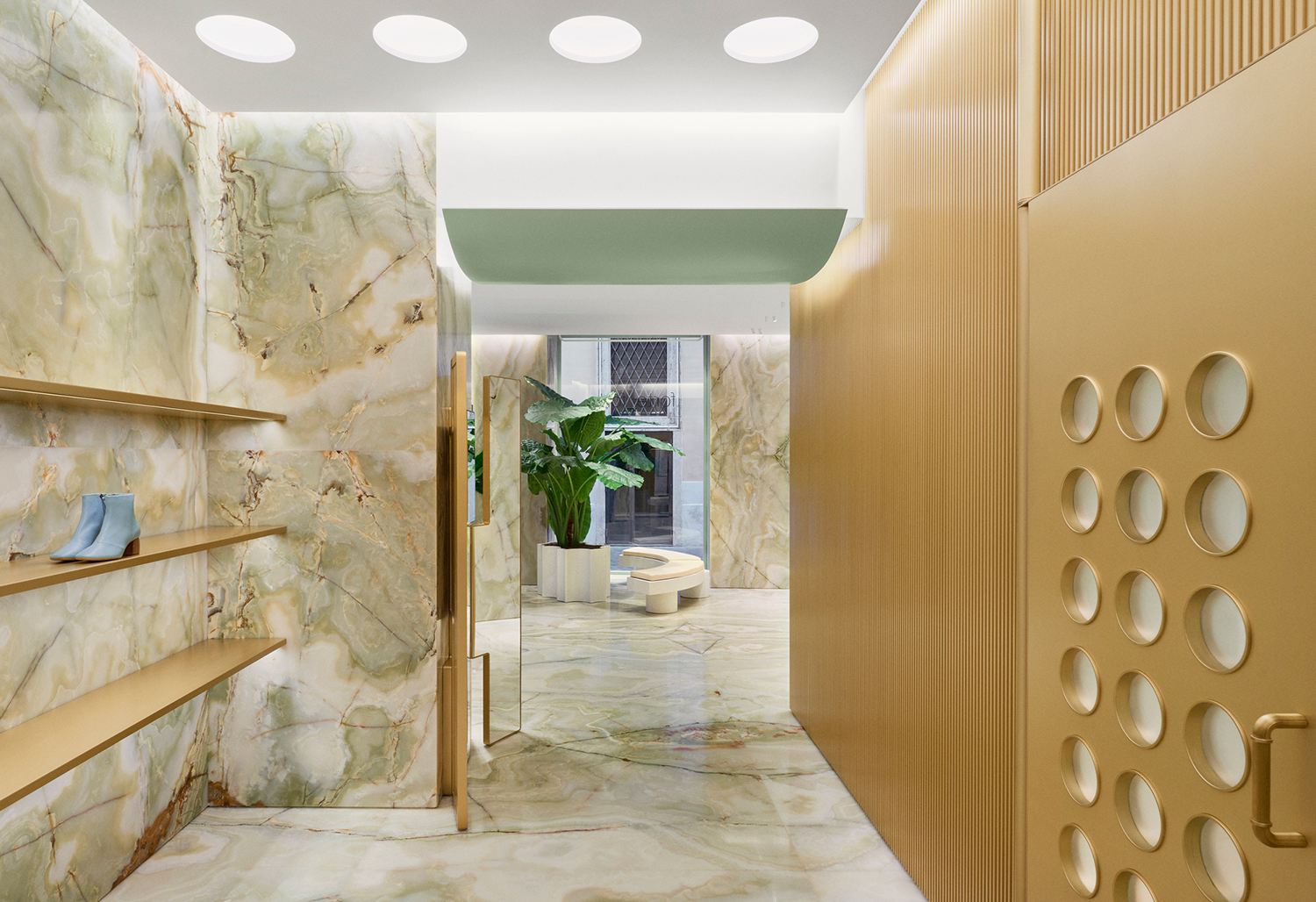 The Forte Forte spatial narrative is an ongoing path in which powerful and present materials and pure forms – now airy and impalpable, now solid – are molded on the unique characteristics of the place. meaning by locus, not so much, or not only, the immediate surroundings, as the genius loci itself, and with it the city. From the creative dialogue between Giada Forte and Robert Vattilana a language is born which, following a rhythm and a metric that is different each time and locations, becomes a lingo. the opening of the new roman boutique, at number 4c in Via Borgognona, in the heart of what was once the Campo Marzio, in a street full of character marks a new chapter and affirms a new idiom, made of extreme synthesis, of a desire for intimate permanence. a sense of gentle power, of timeless lightness, pervades the whole. 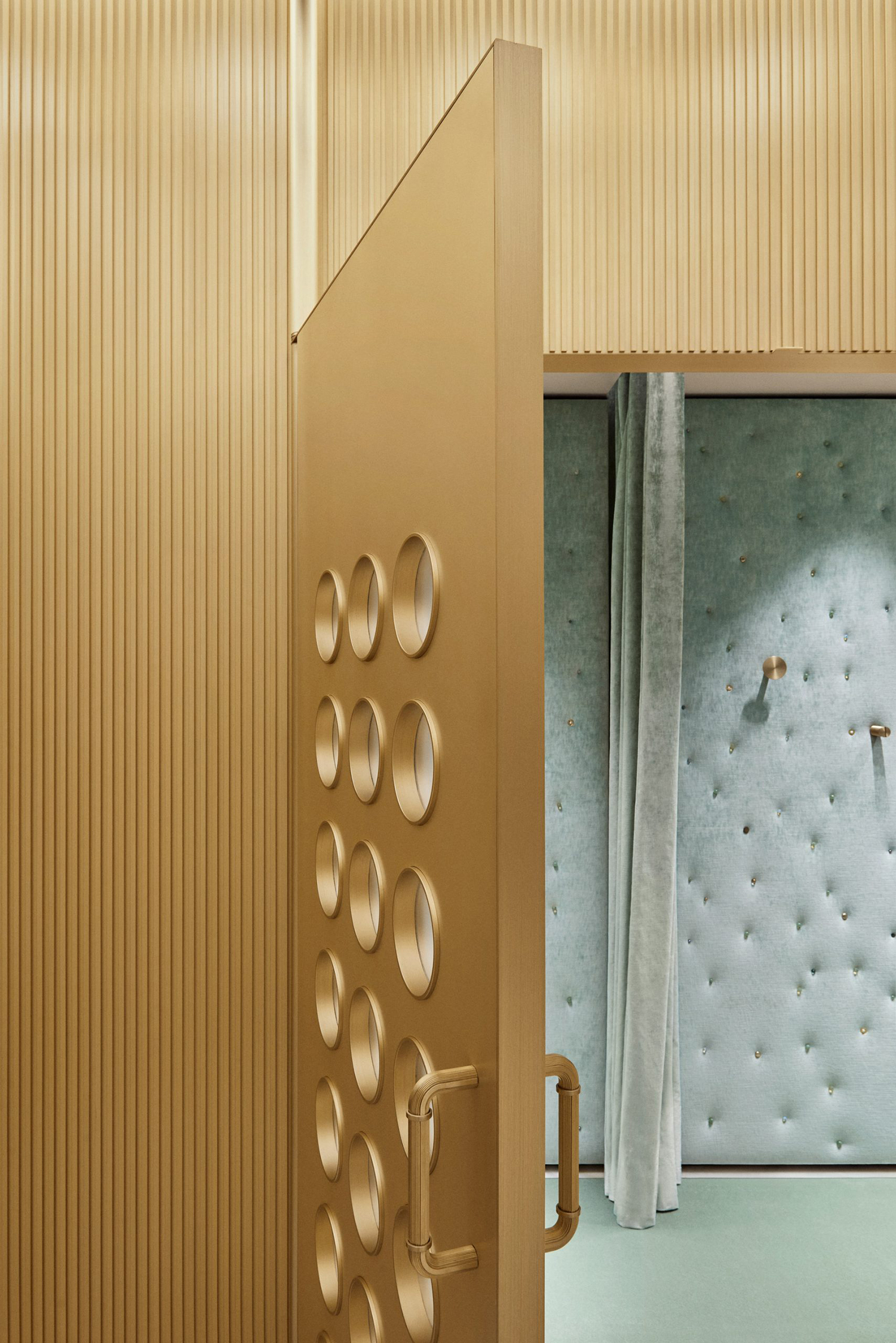 The challenging moment is about the concept itself which takes into consideration a complete custom-made and artisanal project located in a historic building under the protection of the city superintendence of fine arts. Working with the green onyx treated in large symmetrical blocks means designing the whole space counting every single millimeter. The great artisanal team made this project possible. During this period of world pandemic and lockdown, we managed to keep safety at first while timing plus budget was always under control. 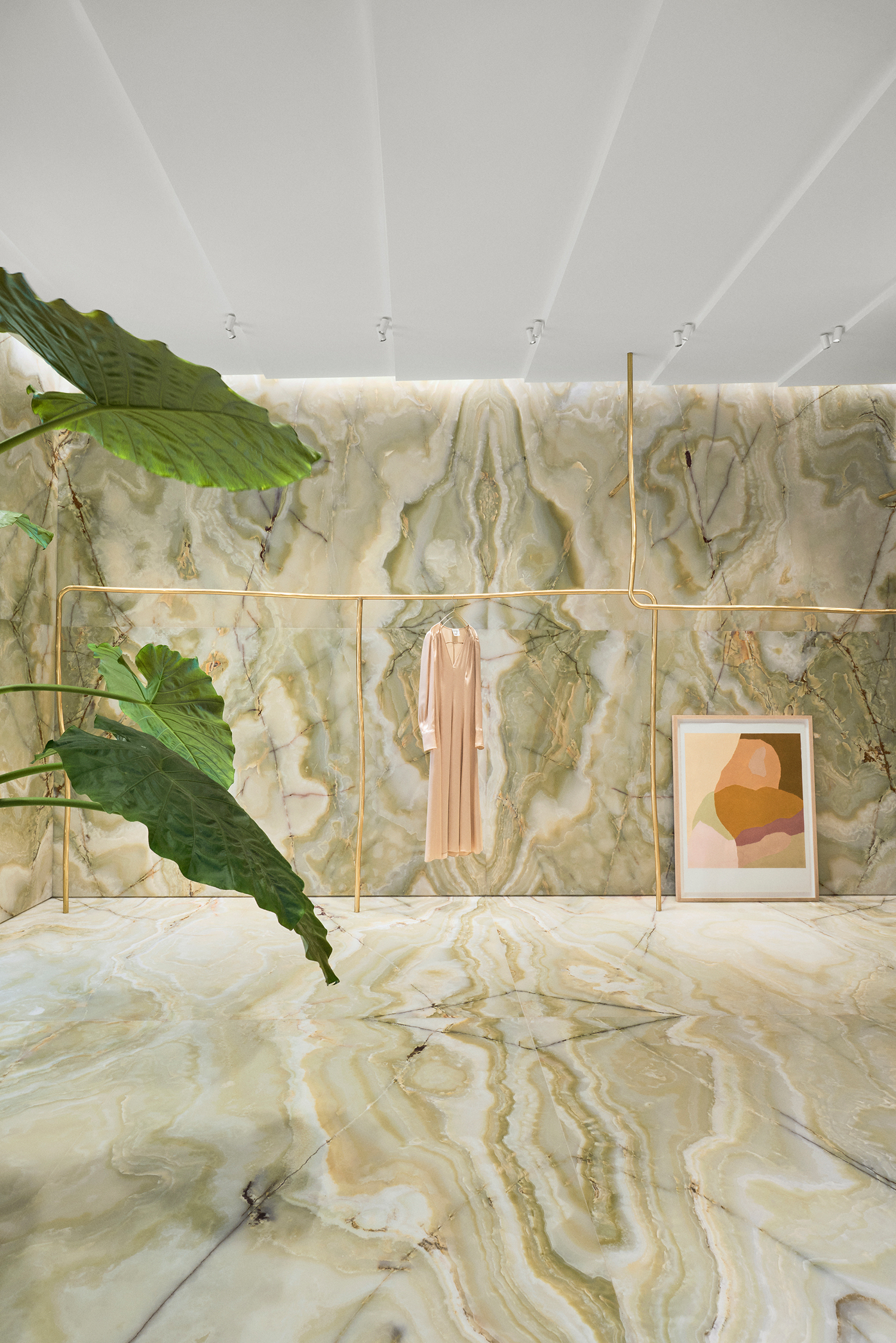