In conceiving this iconic fashion boutique based in Chengdu, China, Various Associates focused on how to truthfully express and reinterpret the unique local cultural context through design approaches. Taking “Don’t know, Don’t care” as the core brand values, (SO)What advocates that every female can find her own dressing style in the boutique, and represents the unrestrained and independent characters of contemporary females. After thorough considerations, the design team turned to the profound opera culture in Chengdu, as there is a popular folk saying that Shu Opera is the best in the world.

The project faces the northwest of Taikoo li across the street, with a steady stream of people passing the door. Without barriers at the front, the square double-height facade offers pedestrians a direct view to the store from a distance. The special geographical location forms a favorable spatial relationship for optimizing the view and interaction. 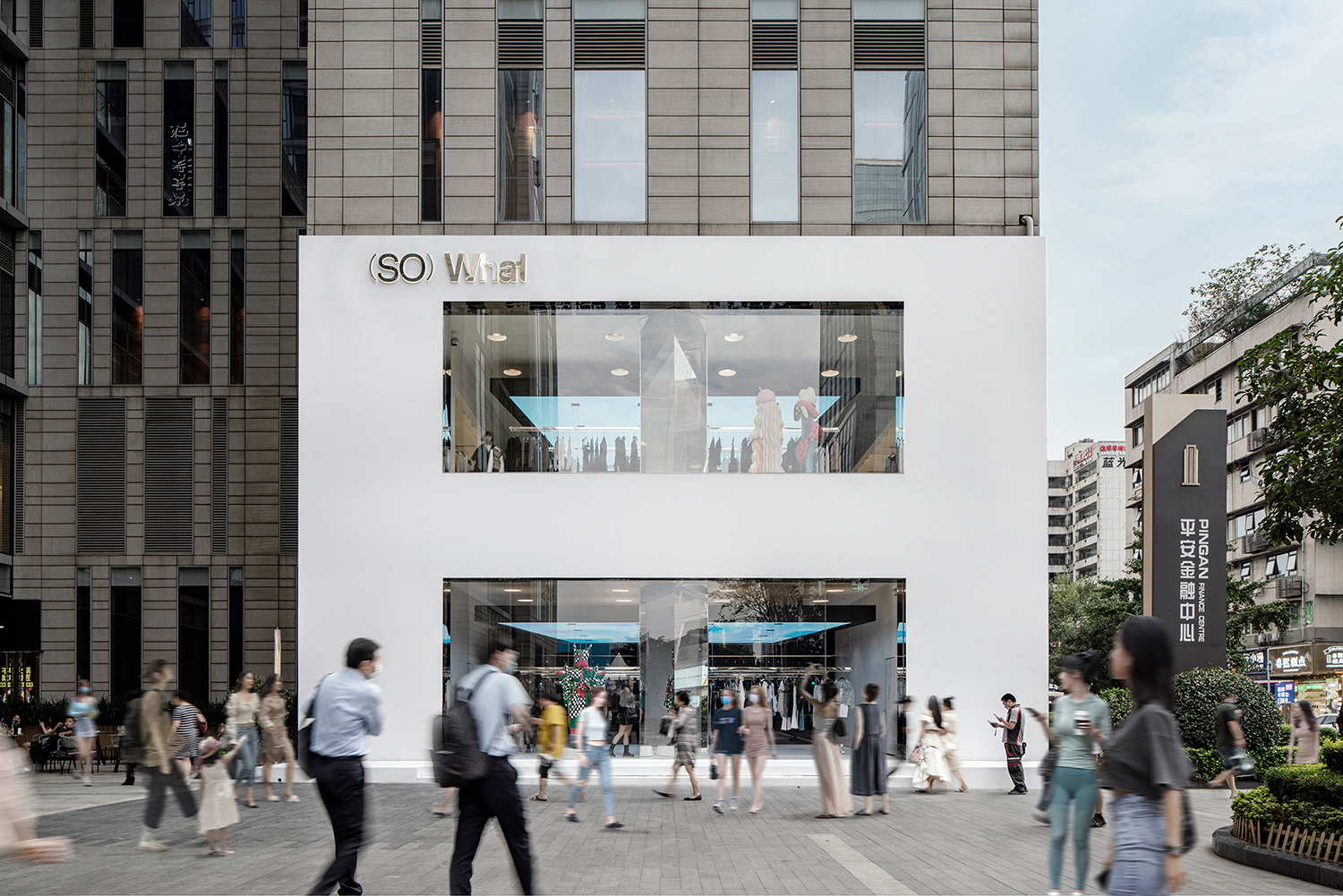 The focus of the facade design was to capture the attention of all passers-by at a glance. For this purpose, Various Associates removed the original enclosed facade to maximize the display surface. The team adopted pure, direct and dramatic design approaches, and brought in giant suspended rotating screens as the core of the design.

The suspended rotating laminate panel weighing over 7 tons was a great challenge yet breakthrough. In addition to suspending the structure in the lightest way under limited conditions, the designers worked to ensure the flexibility and multiple rotation possibilities for the giant screens. 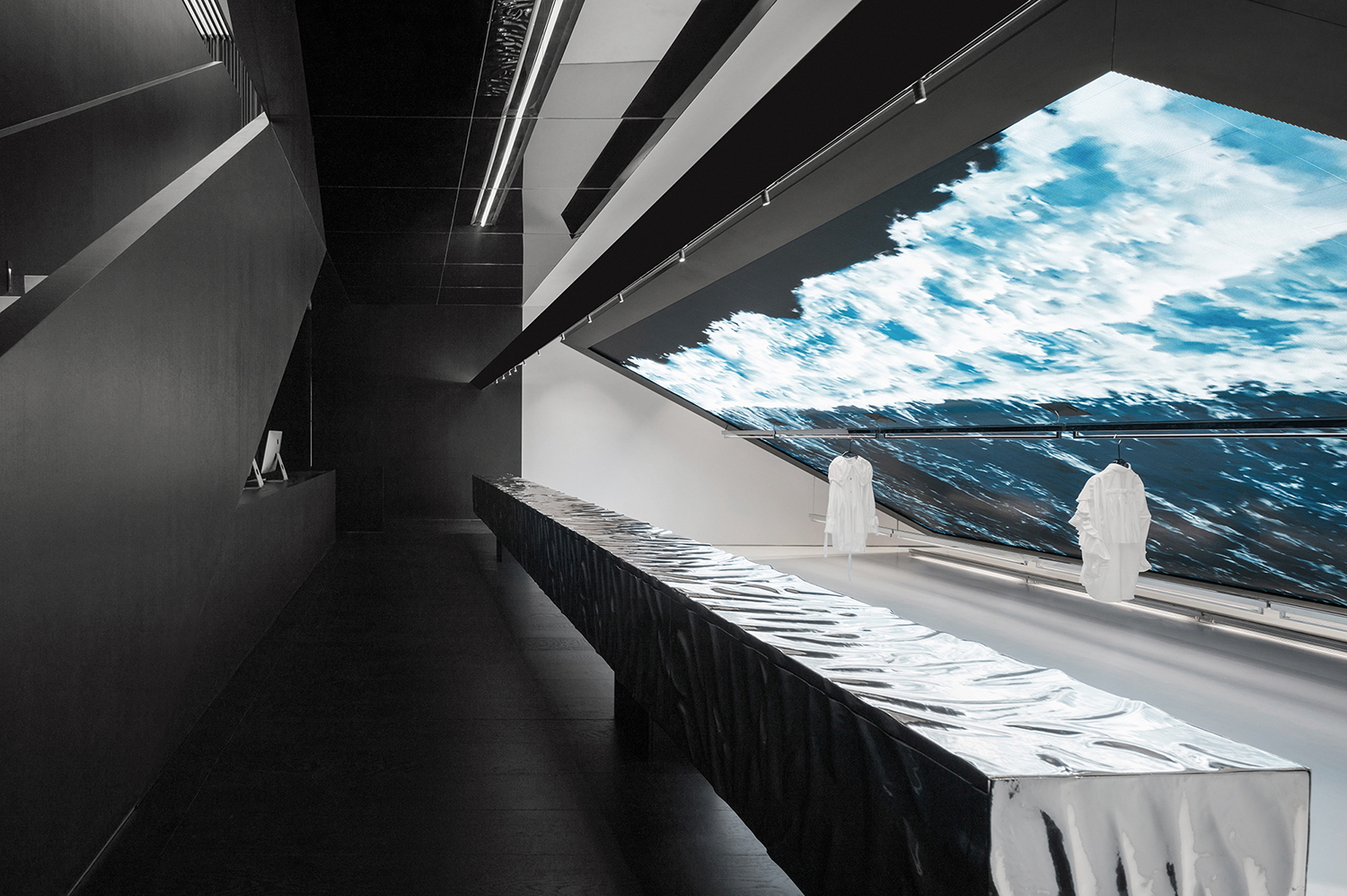 After communication and cooperation with multiple professional teams, Various Associates eventually realized a screen structure that can rotate 180 degrees horizontally and move vertically with electric control. The giant screens at different angles produce a boundless feeling in the limited interior space.

The giant rotating screen is like the stage background of a play that can change freely. Randomly-switched dynamic elements and multiple angles of inclination are combined, to create a distinctive intuitive experience in the space. 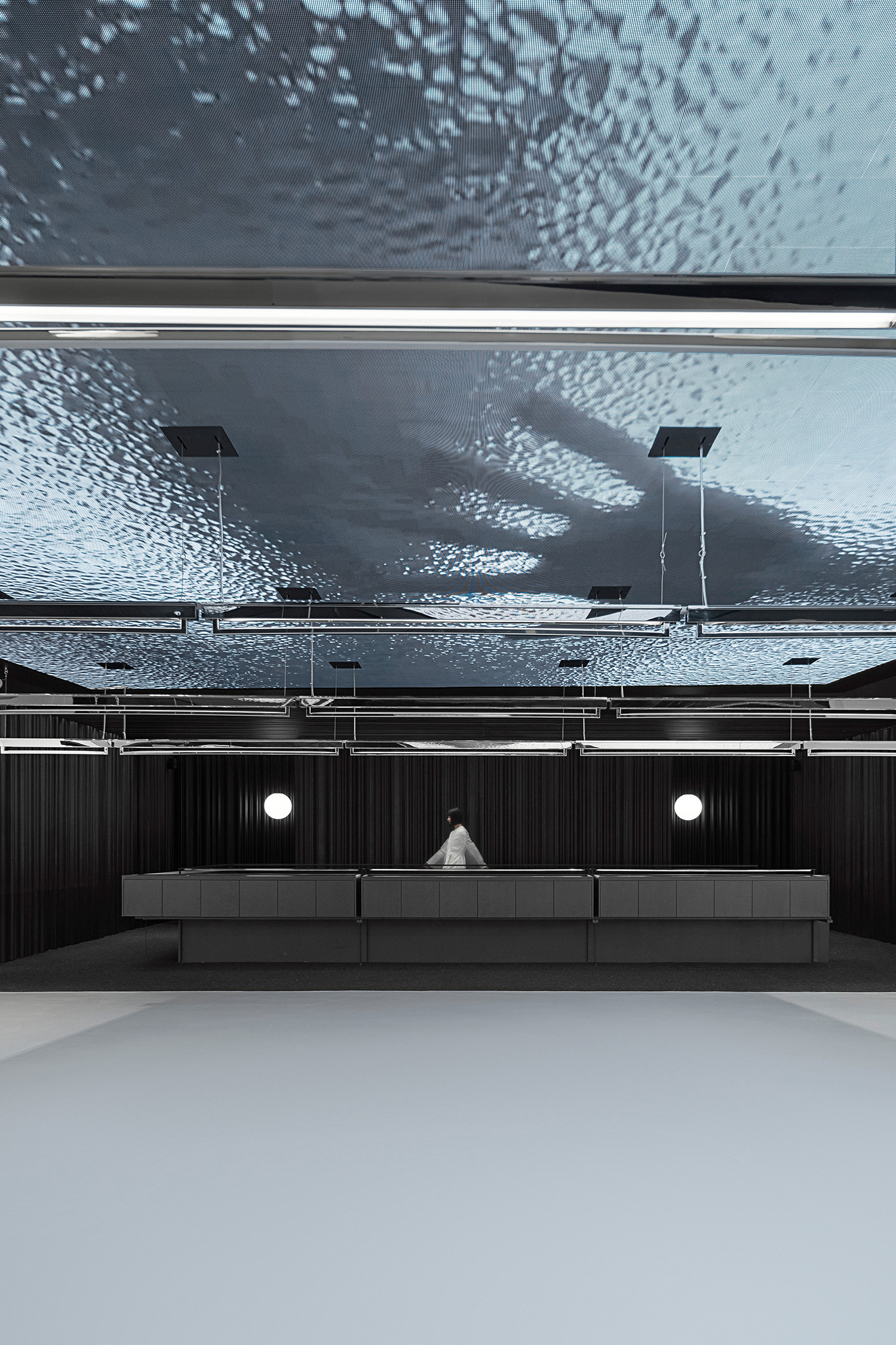 Suspended in the air, the giant variable screen, just like the stage background, can directly shift the scenes according to different spatial atmosphere and brand elements, and can convey changeable and magical dramatic effects in a modern manner.

Changing images on the large screen and music create an immersive experience, thus generating a stunning and fantastic atmosphere in the space.

Clothes hung on the stage sway gently as customers walk by, appearing more free and graceful. The light and colors on the display screen are reflected on the stainless-steel clothes rails, showing harmonious coexistence and interactions of different elements. 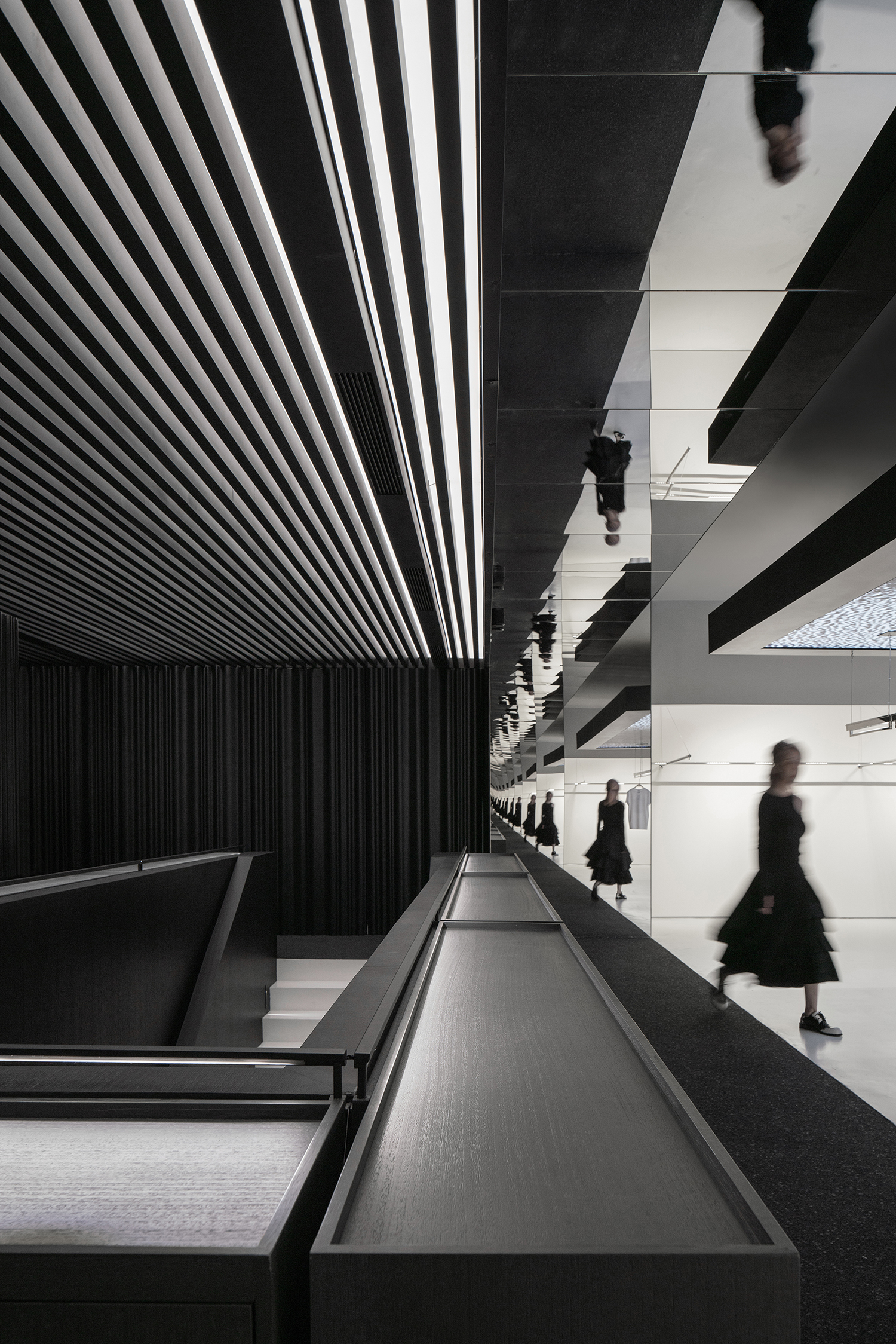 Various Associates believes that people are the most important part in the space, and hopes that customers are like protagonists on the stage. The difference is that everyone is performing their own stories, showing unique individual characteristics. The customers who are walking and selecting their favorites under the “stage background” are like the leading roles on the stage, displaying their distinct aesthetic taste and personalities. 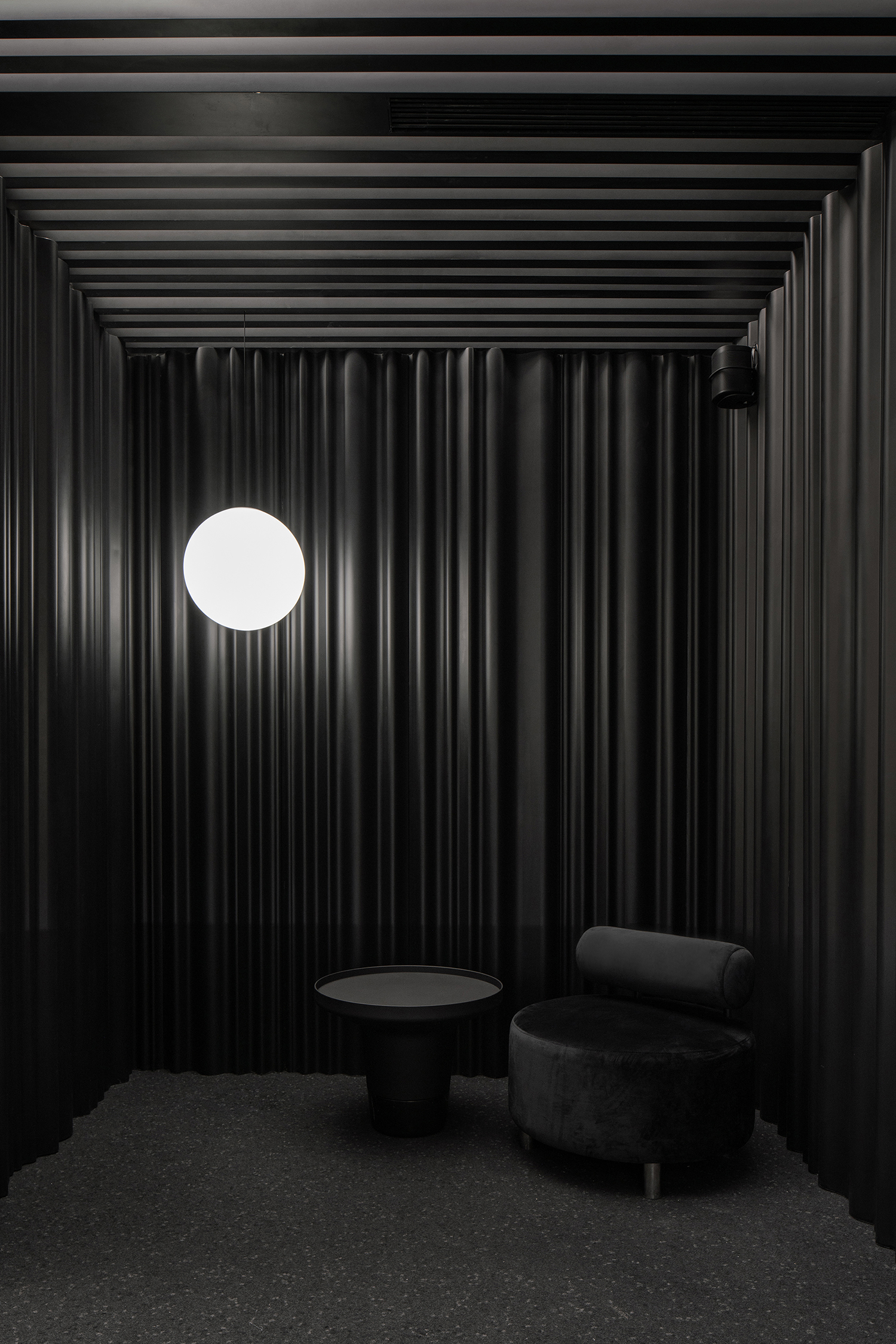 The unique structure and circulation of the main space enables diversified spatial functions to surround it, making it easy for flexible shift between different functions, such as brands’ products release conferences, cross-sector activities and fashion shows.

(SO)What upholds the unrestrained and independent character of contemporary females, which indicates the brand’s core values. In response, Various Associates created a cool, fashionable, and tasteful spatial atmosphere through the strong contrast of white and black hues and the giant variable screens, to interpret the brand’s original intention. 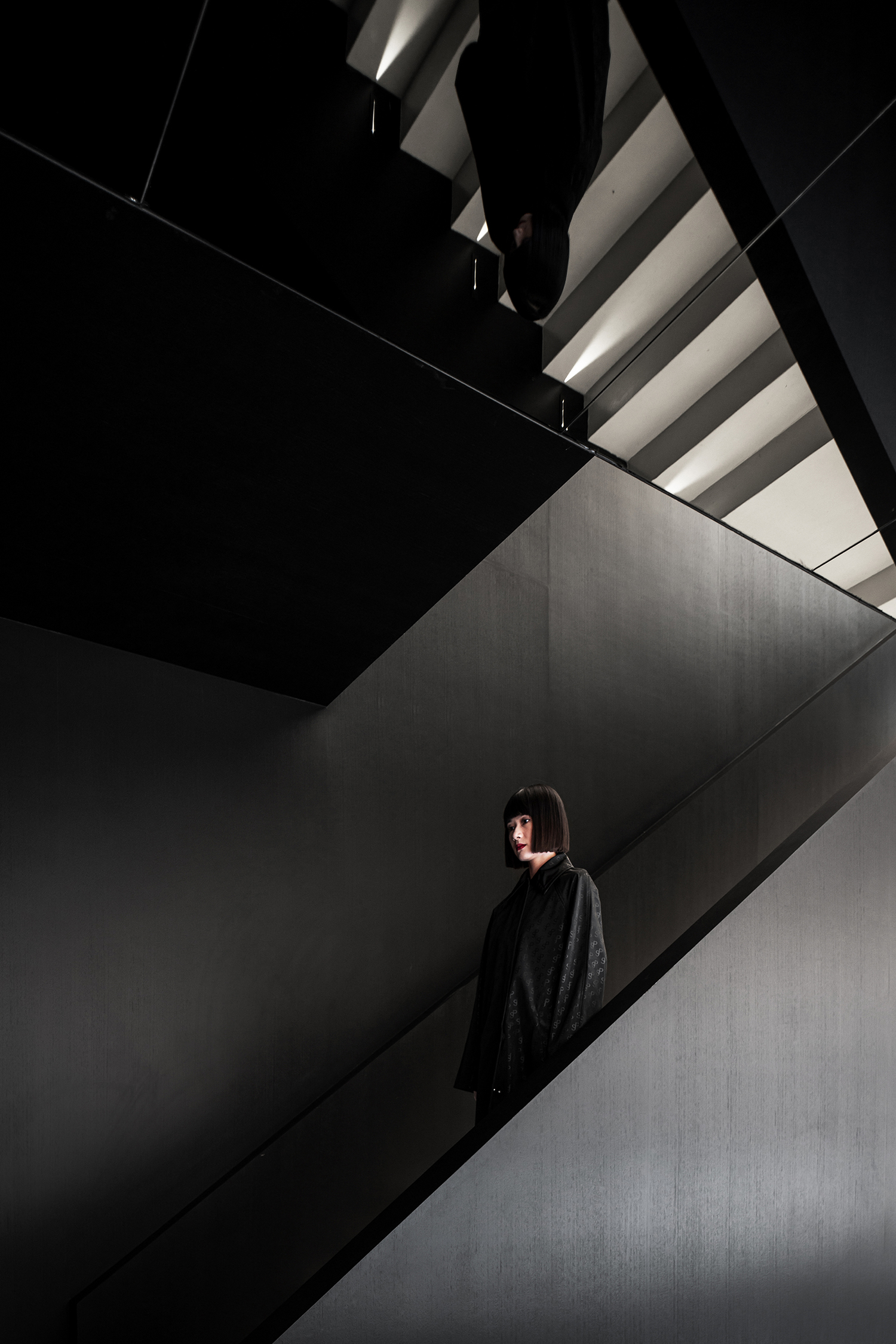 The pure, endless and multi-layer black is another highlight of the entire space in addition to the large screens. The black tone makes other colors exceptionally clear and vivid in the space.

Colored objects in the space are especially clear and bright. Conspicuous and dramatic visual effects are created as people wearing clothes with different colors walk in the space.

The long wrinkled accessory counter seems to float in the air, and naturally divides customers’ and service staff’s circulations. The mirrored lighting fixture above highlights the delicate accessories, whilst also reflecting the countertop and drawing customers’ sight line. All the details reveal subtle designs. 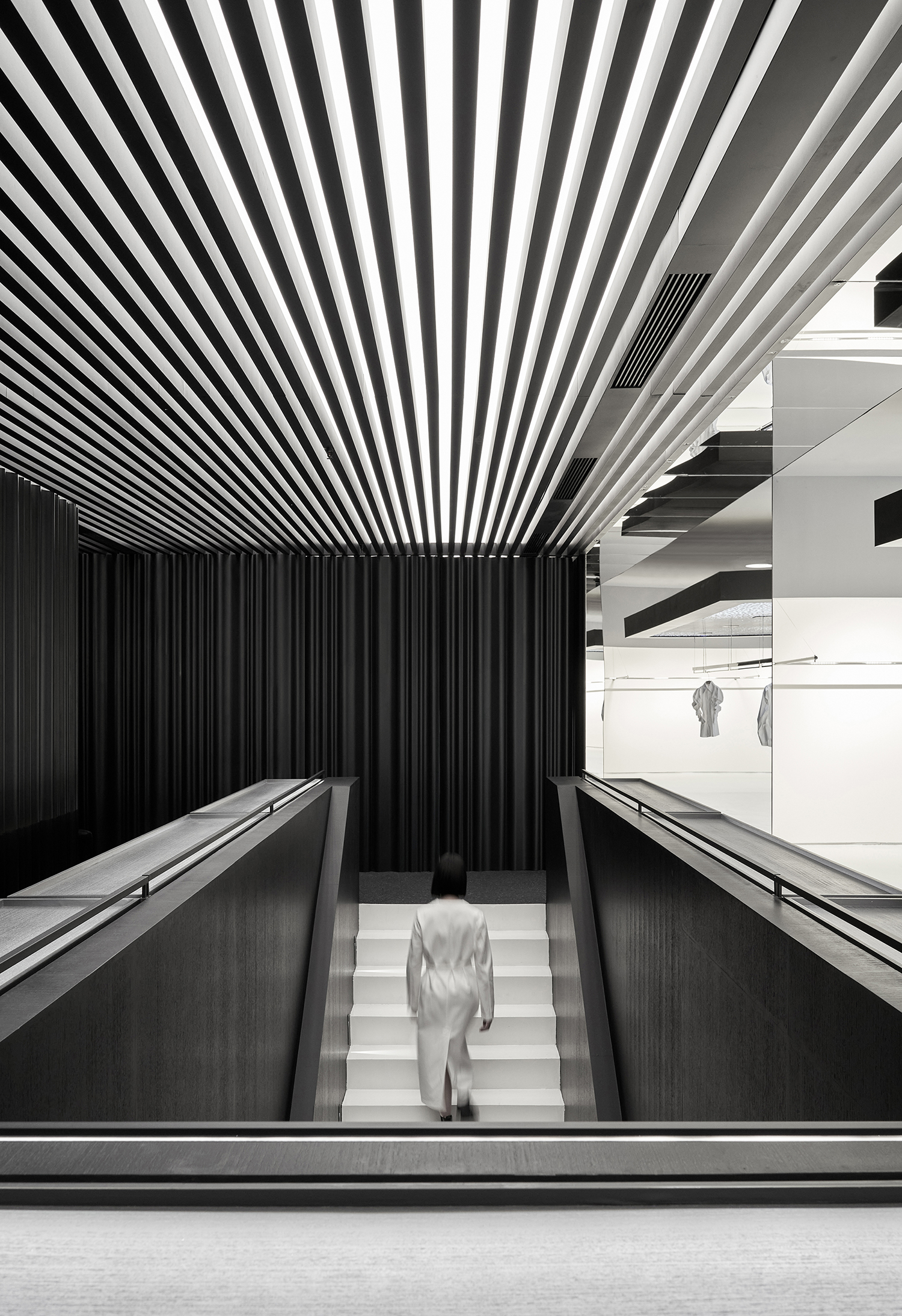 The silver area hidden in the black and white space switches between the virtual and the real as the sense of boundary vanishes. It interacts with any color brought in. The silver lamp on the ceiling brightens the whole space like a light beam from outer space.

The staircase leading upwards is dominated with black and white, and is characterized by a strong sense of layering and a dramatic contrast of brightness and darkness.

The cool lighting and strip structures on the ceiling reveal the perfect balance between function and atmosphere. The pure white light guides customers to go upstairs in the darkness. The layers and energy of light add noticable charm to the space. 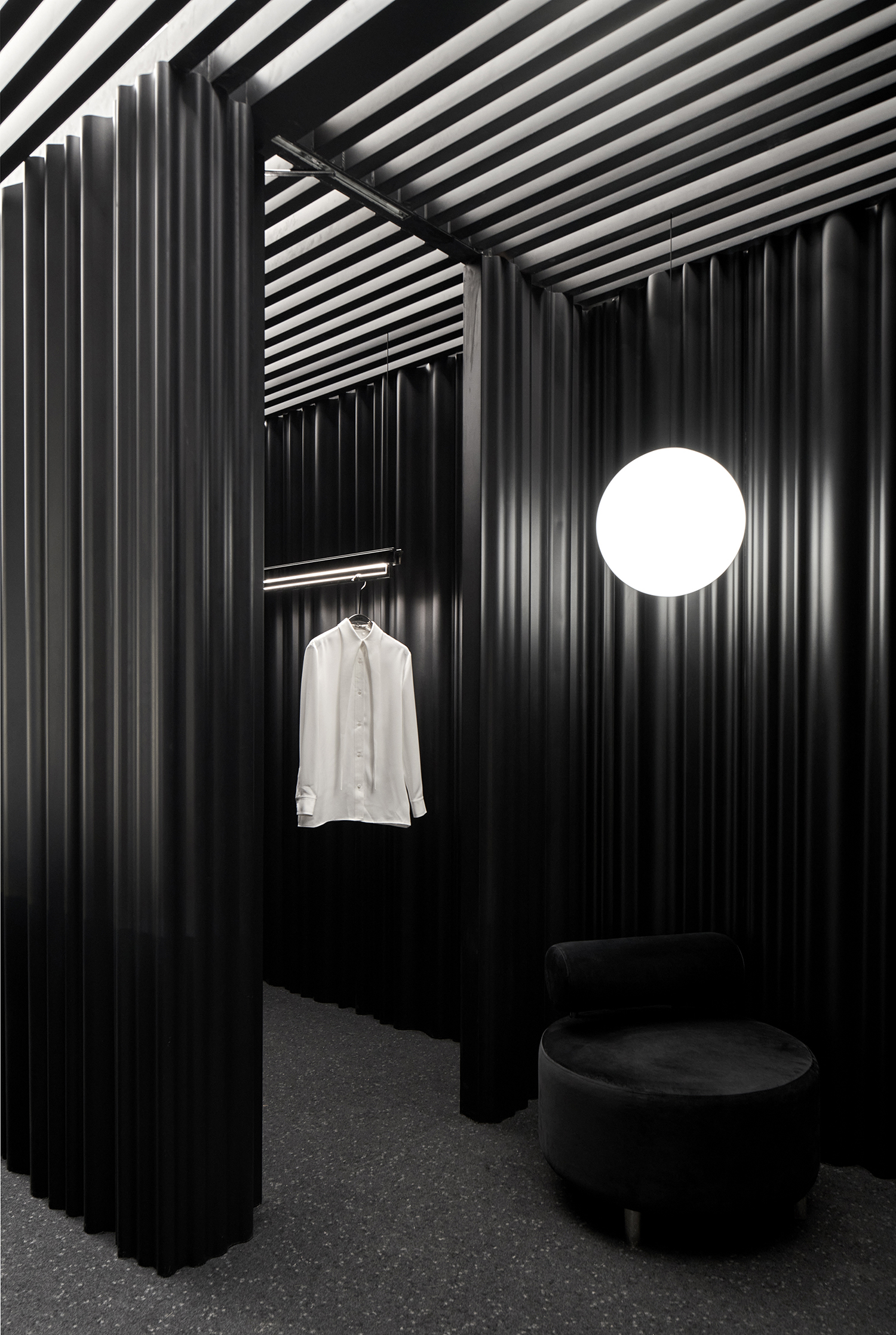 The second floor is a more pure and classy black spatial realm. The design follows the storyline of “Stage”, with the wavy black interior surfaces recalling stage curtains.

At the multi-functional accessory counter area, the wavy panels can be opened and closed freely like stage curtains, hence allowing the space to flexibly shift between different functions such as accessory display and storage.

Mirrored shelves are suspended in the black background with rich layers of light and shadows. The light shines on the black “waves”, creating gentle, changeable and exquisite visual effects. 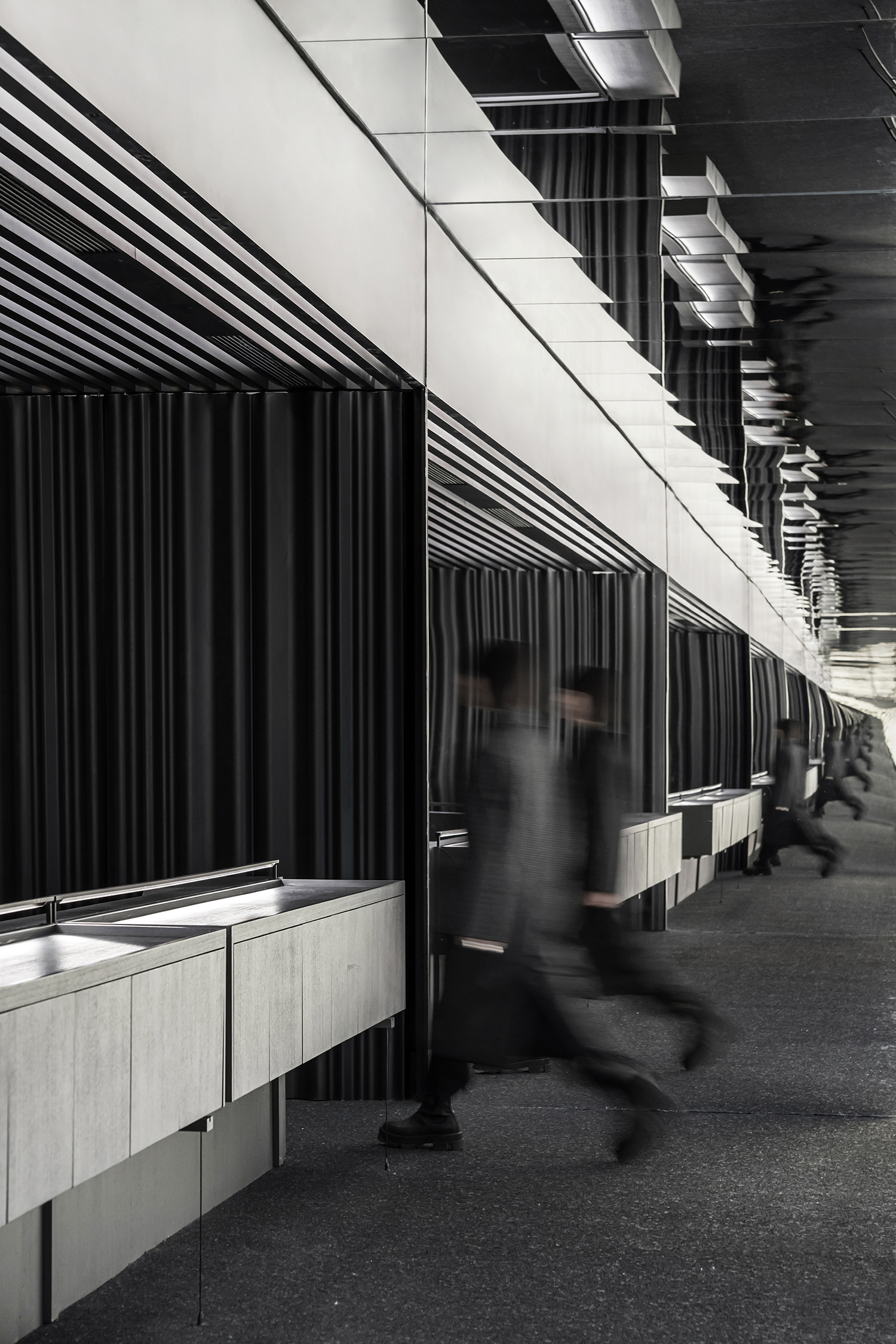 Spherical spotlights are like two parallel stars in the boundless universe, turning the space into a tranquil, calming, and mysterious wonderland.

In the corner next to the fitting room curtains, customers can sit on a soft dark gray velvet sofa and wait for their friend or partner to show their outfit.

The fitting rooms hidden behind curtains on two sides are more like preparation spaces poised for changing dress-ups. Every cycle of performing on the stage and preparing off the stage is an experience of playing different roles in a play.