Samuel Homfray built a locomotive that carried ten tons of iron, seventy men, and five wagons over nine miles in two hours in 1804. The machine was rejected because it was too heavy. But by the 1830s passenger railroads were springing up all over Britain and America.

The very first model locomotive was built in 1784 as a prototype for the first real locomotives, allowing the mechanical engineers to evaluate the workings of the machine.

In the 1840s, people, fascinated by the massive trains, built ‘carpet locomotives’, actual miniature engines that ran across the room, usually on carpet without track. The first ones were powered by steam engines and were called “Dribblers” and “Piddlers” because of the trail of water left behind. These small steam engines unfortunately had a nasty habit of exploding because they lacked safety valves. Steam engines, as a source of power for the small locomotives, were rapidly replaced by clockwork mechanisms until safety valves were installed.

In 1859, Emperor Napoleon III had a model train built for his son, Napoleon, at the Chateau de Saint Cloud. The track was laid in a figure 8 pattern with little houses and people along the track. The train was powered by a clockwork mechanism.

The Germans made the earliest models of iron and the very earliest were not mobile. The French used tin. The French models didn’t age well since paint doesn’t stick to tin very well. As trains became more prominent around the countryside, so did model trains. Toymakers started looking for better ways to power their models. Steam engines piddled and exploded. Clockwork engines had a limited range and no way to control them. Smaller steam engines were designed with catch basins for the water.

By the late 19th century, toy companies had developed ways to power the models with electricity. Early methods included a third rail between the usual two that would transmit the power to the locomotive. However, this required that the locomotive be made of metal to be able to conduct the power, causing weight problems. There were also safety issues. The next generation transferred the power through one of the two regular rails or through overhead lines. This tended to decrease the weight problem but did not eliminate the safety complications. 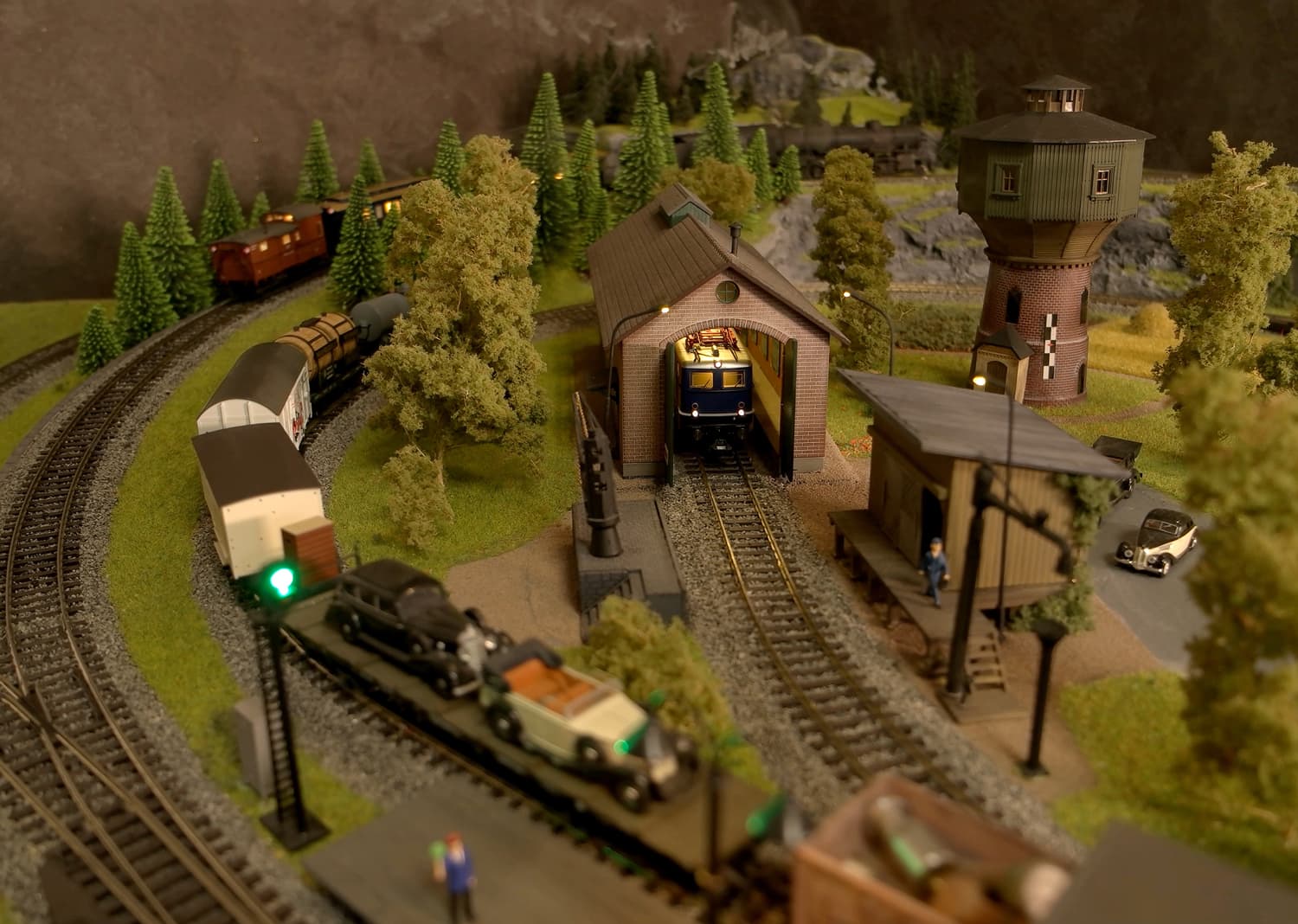 Expansion of Model Trains and Landscapes

As railroads spread across the continents, providing rapid transportation to people and cargo, the allure of trains and travel grew. Model trains became a favorite toy for men and boys. Females were, for the most part, excluded from this club.

The Golden Age of Model Railroading started in the 1920s. Clubs formed, renting space in large buildings where they built intricate little villages and farms, fields and forests, people, and dogs, and cats, and cows. Everyone in the club pitched in to buy or build part of the display. They were often built in modules which could be taken apart and carted home. Most of the club members were adult males, although there were a few women, and a lot of boys. In the 1950s, model railroads were the number one Christmas gift for boys.

Many companies contributed to the growth of the hobby. Baltimore Locomotive Works created the first model passenger cars. George Brown & Co., of Connecticut made the first self-propelled locomotive.

But the industry owed most of its expansion to a man named Joshua Lionel Cowen. Cowen started Lionel Trains, making his first electric models in 1899 and patenting them. The company started by selling train layouts to stores who would display the models in their windows. But adults and children wanted their own trains and soon Lionel was making trains for retail sales. Lionel has remained the biggest name in the hobby.

In 1934, the magazine, Model Railroader began publication. The magazine continues to this day, recording new technology and trends.

Model railroading was a natural offshoot of railroads. The railroads are not the same any more, although trips across country can be an interesting and relaxing form of vacation. For the most part, the cars carry cargo, to and from ports. Much of the romance of the trains has disappeared.

But in the model locomotives and passenger cars, the excitement still shines. And children of both sexes still are thrilled with a train set for Christmas.