Pure beauty in all shapes and surfaces – this is the philosophy behind Horacio Pagani’s latest creation. From this foundation is built a masterpiece with a perfect balance of attention to detail and technological advancement. The combination of Art and Science: a founding principle and cornerstone to the philosophy of Pagani. This creed comes from the genius of Leonardo da Vinci, who pursued perfection in form and function at every stage of the process, down to the most minute component of the design. All Pagani creations are born from this relentless chase of beauty and passion. The Pagani Huayra Roadster represents an unbridled artistic showcase, featuring the most dynamic technology; this is Horacio Pagani’s open-air tribute to the gods of wind. 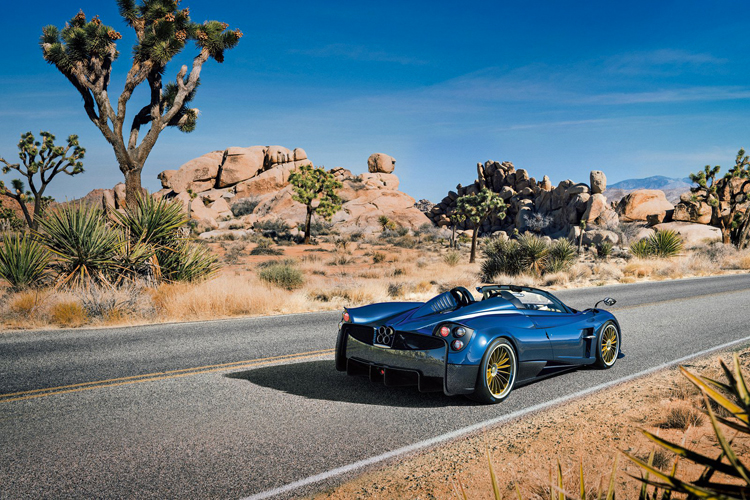 The Pagani Huayra Roadster door design followed in the tradition of the Mercedes-Benz models of the 1950’s, specifically the gullwing doors of the 300-SL, and its Roadster variant featuring conventional doors. The overall shape is smooth and immediate, where each line has a beginning and a definite end. Every last detail has been revised- every contour made more defined, every curve redrawn multiple times to arrive together in a cohesive, liquid form.

From the more aggressive and pronounced mouth of the car, framed by wider wheel arches, from the shape of the roll bars to the upgraded interior- every single element of the car has been scrutinized and redesigned. Every detail considered and developed with its own unique design language, in direct symmetry with aerodynamic requirements. 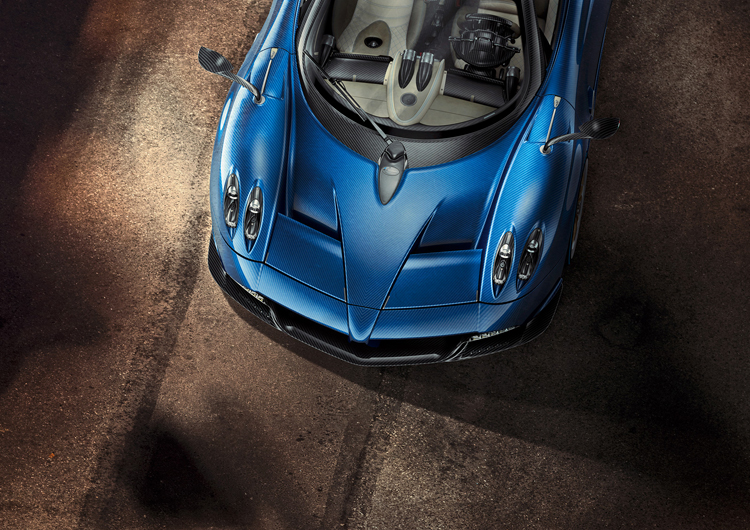 The bonnet has a fundamental function: an elegant vitrine containing both the technology and the art of the engine. By natural evolution, its design took on a life of its own, becoming a space with its own stylistic identity, itself worthy of being exhibited in an art gallery. Unlike most modern supercars, the Pagani Huayra Roadster is almost fully exposed, with nearly every mechanical part visible, every last piece proud to be revealed. Staying true to the Pagani philosophy of respecting every last detail in the design, every piece of the car given consideration and attention. Even the smallest screw is designed to be both beautiful and functional. 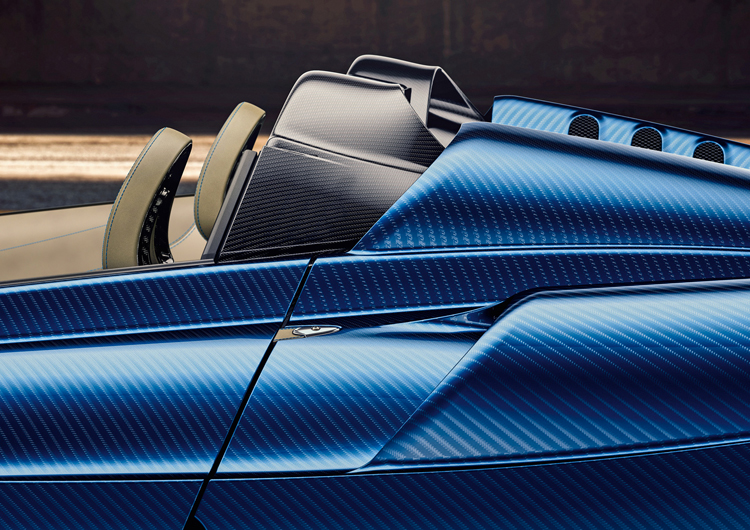 The Pagani Huayra Roadster is powered by the Mercedes-AMG M158 engine. The twelve-cylinder engine, built specifically for Pagani by Mercedes-AMG, has benefitted from the research and development done for the Huayra BC, delivering power of 764 HP at 6200 RPM, with a torque of over 1000 NM already available at 2400 RPM. 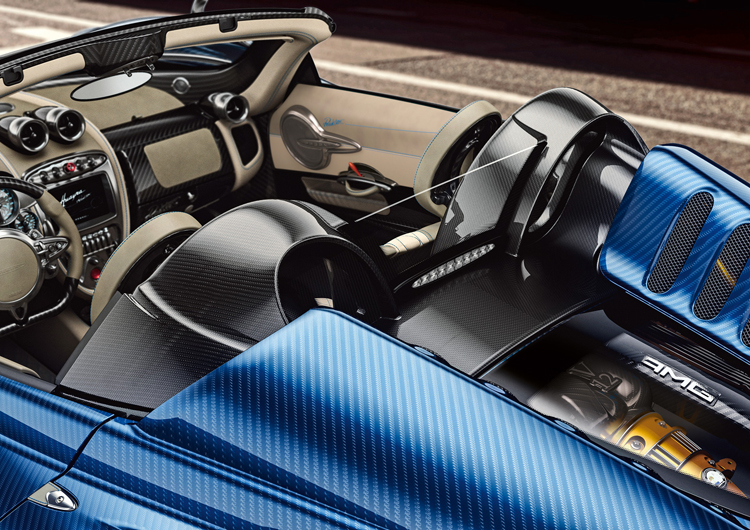 Equipped with the most cutting edge technology, the twin-turbo, 12 cylinder, narrow angled 60 degree engine with 5,980 cm3 has been developed to satisfy both the international homologation standards and the even more stringent Pagani internal standards, resulting in a driving experience both relaxed and electrifying. The turbines have been developed to provide an immediate throttle response without delay, providing the driver with full control of the vehicle. The dry sump lubrication allows for perfect engine response, even under the most extreme lateral acceleration conditions. 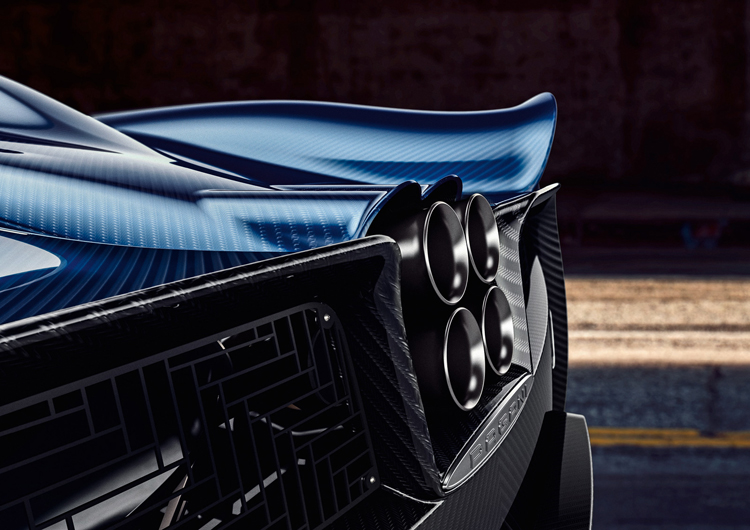 Pagani Huayra Roadster will be fitted with two types of roof. The first consists in a very light carbon hard top with a central glass element, very simple and quick to install. In this configuration it assumes the look of a coupe, with a glass roof that provides the passenger a unique brightness, protecting them from UV rays and also giving a sense of freedom typical of a Roadster even with the installed hard roof.

The second type of roof is a fabric and carbon cover that can be easily installed manually and can be stored inside of the supercar. The Soft Roof can be installed in a few simple steps and in case of rain. 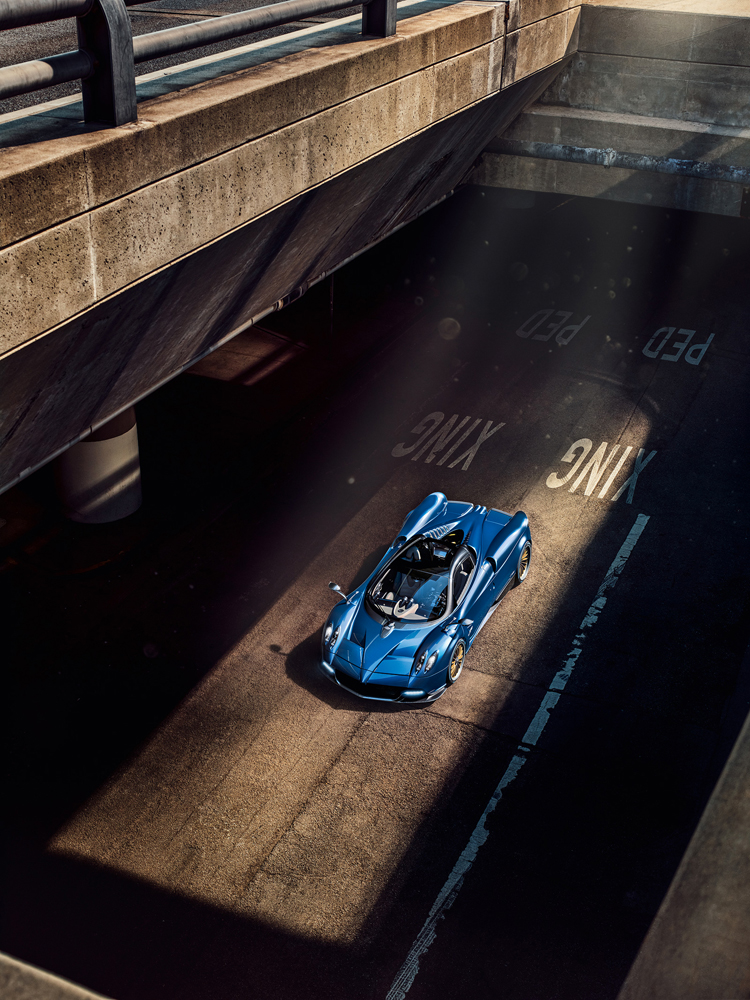 all images courtesy of Pagani