Making urban bicycle commuting a viable option for everyone, UrbanX is the quickest and easiest way to give bikes electric power. By replacing the bike’s front wheel with smart wheel technology, UrbanX converts any BMX, cruiser, hybrid, mountain, road and touring bike to an e-bike with a 30-mile range in 60 seconds, without the need of any skills or knowledge of the bike’s gearing. Flattening out hills, shortening distance and getting riders to their destination faster, UrbanX helps riders enjoy the fun and convenience of an e-bike while conserving energy.

“Over the last several years, we have seen a resurgence in cycling that is especially prevalent in urban spaces across the globe,” says Eric Chow, founder and CTO of UrbanX. “This urban transportation revolution, due mostly to common city problems such as congestion, pollution and parking woes, has inspired various electronic developments designed to make urban commuting more efficient and rider-friendly. UrbanX has taken these advances and created an economical solution that democratizes e-bike technology for all riders.”

The motors for the 240-watts UrbanX Eco and 350-watts UrbanX Booster allow the e-bikes to reach top speeds of 15 miles per hour and 20 miles per hour, respectively. The Direct Drive Mechanism utilizes 100 percent of the motor’s output to power the ride. Additionally, the patent-pending Sinus Algorithm Controlling System further increases efficiency by converting more of the electric energy stored in the battery to kinetic motor power, allowing for a longer riding range.

UrbanX’s revolutionary smart component comes into play with its Bluetooth connectivity and user-friendly Android and iOS app that allows riders to monitor riding status with features including battery life readouts, distance and speed tracking, a riding map and speed levels. Wheels can also be calibrated with the app for three levels of pedal assist including low, medium and high. 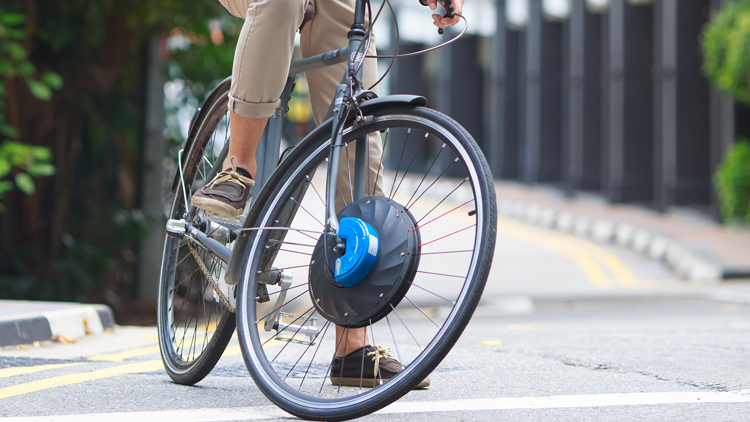 Finely crafted by industrial designer Aberdeen Gini, the smart wheel is made from aviation-standard aluminum to achieve maximum strength, supporting up to 300 pounds, while maintaining a light, 15-pound body. After spending seven years as a structural designer at leading, world-class bike and e-bike companies, Gini developed UrbanX to be front-driven for better weight distribution to prevent accidental wheelie starts that can be problematic with rear drive e-bikes. Powered by a 36-volt Panasonic Lithium Ion Battery, the device provides a pedal assisted range of up to 30 miles per charge. Backup batteries provide for an infinite range. With a built-in USB outlet, UrbanX’s battery also allows for charging electronics on the go.

Limited Early Bird Pricing for the UrbanX Eco starts at $299 USD while the UrbanX Booster starts at $399 USD. The smart wheels are expected to ship to backers in June/July 2017.

all images and video courtesy of UrbanX