To mark over a decade of relationship with South Korea, Rolls-Royce has  unveiled a ‘Bespoke Collection for Korea’ at the British Embassy in Seoul. The Bespoke Collection embraces the aesthetic heritage of South Korea with a contemporary flare true to the sophistication and dynamism of the country’s largest cities of Seoul and Busan, from which the cars take their inspiration.

The two tailor-made cars are as individual as the cities they represent: flying the flag for Seoul in national colours is the world’s foremost business sedan Rolls-Royce Ghost, whilst for the southeastern metropolis of Busan the canvas is the ultimate Grand Tourer Rolls-Royce Wraith, playing to the leisure-orientated lifestyle of the coastal city. 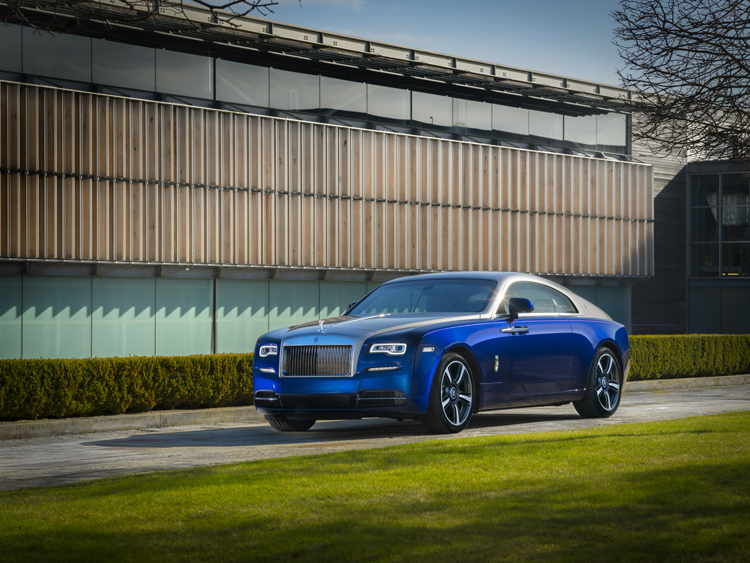 Representing the capital city, the Ghost wears white and black set off by red and blue design elements, a colour palette chosen with reverence to the traditional Korean colours that grace the country’s Taegukgi national flag. The exterior is Andalusian White, a bright white befitting the colour’s historical symbolism of purity and hope and aptly representing the element metal.

Above a twin coachline in Cobalto Blue and Mugello Red sits a hand-painted motif capturing the silhouette of the iconic Namsan Seoul Tower, the passionate red traditionally balancing the calm blue. In a subtle flourish, these colours also form pinstripes tracing the circumference of the wheel centres. 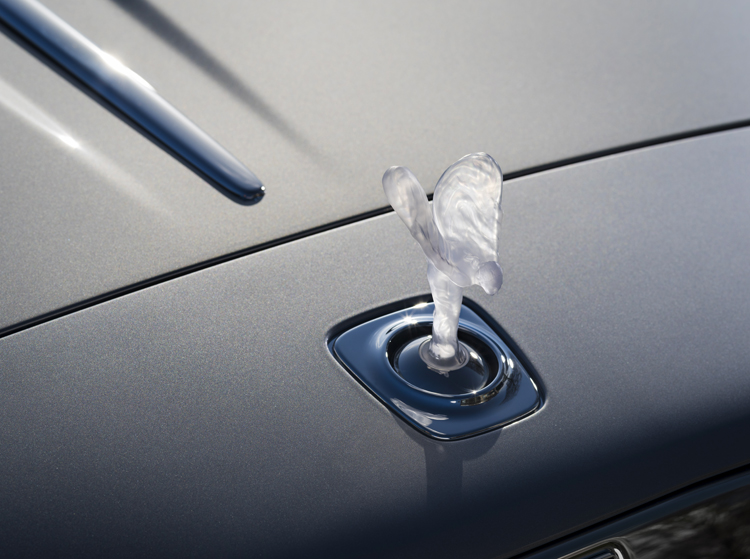 Inside, the effect is equally dignified. In a dark, brooding ‘Black tie with a twist’ theme, the contours of the Black leather are accentuated by contrasting Arctic White elements along with seat piping in the same Mugello Red and stitching in Cobalto Blue.

Beyond the threshold of the coach doors and Bespoke treadplates, sitting in the privacy of dark tinted rear windows, the patron and their guests enjoy a luxurious environment for either work or pleasure. 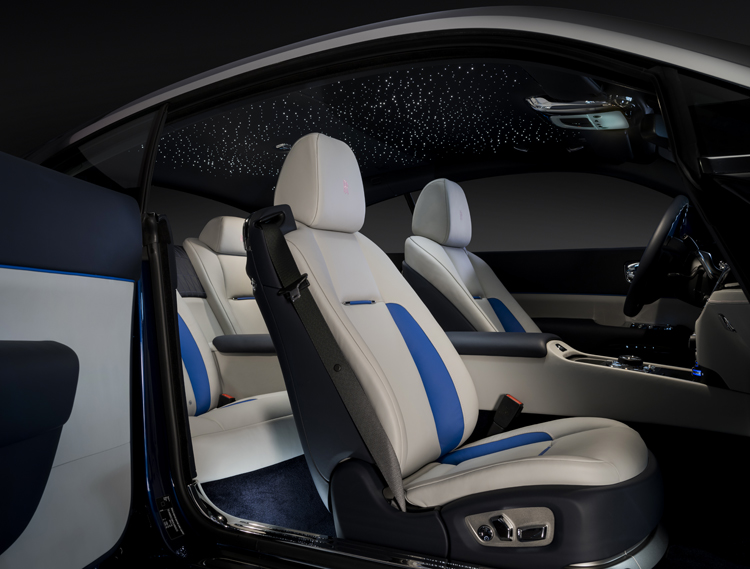 Massage seats with perforated leather for air ventilation ensure they will arrive relaxed and refreshed, pampered by sumptuous headrest cushions embroidered with ‘RR’ monograms and hallmark Rolls-Royce lambswool floormats, calmed by the Starlight Headliner, and entertained by the rear-seat theatre and Bespoke Audio system. The increasing number of Korean owners who wish to drive themselves will be met with a sleek Piano Black fascia inlayed in silver with the bespoke Seoul Tower motif, which is also found on the back of the rear seat picnic tables. 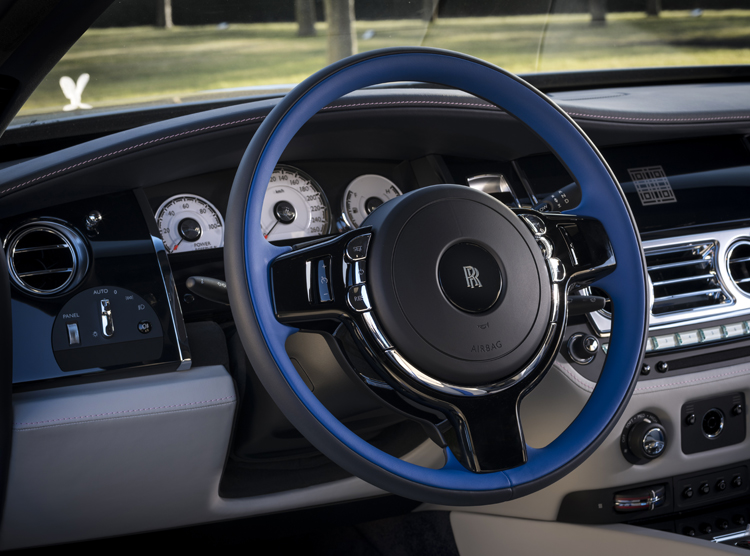 The coastal city of Busan, with its harbours, beaches and rocky coves feels like a world away from the bustle of Seoul. Likewise, the contrasting mood of the Busan Edition demonstrates the breadth of possibilities that Rolls-Royce Bespoke provides. Like the Seoul Ghost, the rear pillar motif created by the Goodwood design team for the Busan Wraith holds traditional and modern icons as its inspiration. 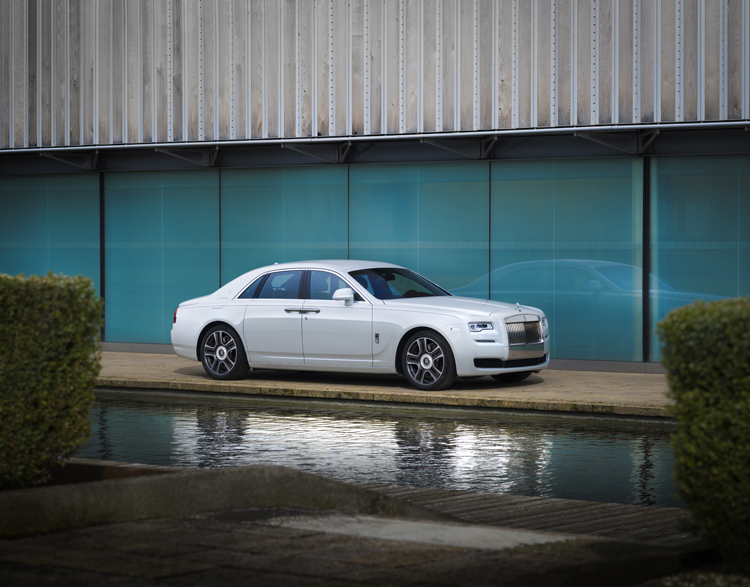 At the same time, it takes a more stylistic artistic direction that speaks of a complementary yet contrasting architectural theme: a geometrical pattern inspired by the delicate latticework seen in traditional Korean hanok screendoors and also reflected in the modern-day architecture of Busan – the lattice effect formed by the intersecting metal beams and glass panels of the skyscrapers of the city’s most sought-after residential area, Marine City in the Haeundae District. 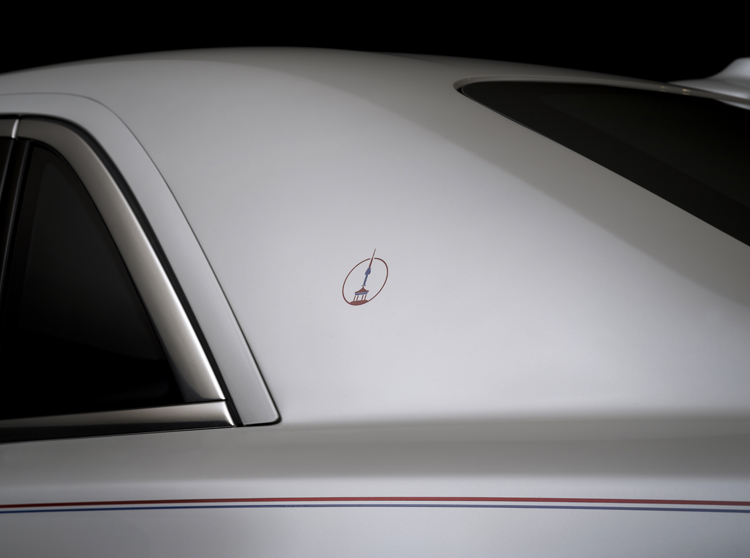 The exterior is a Royal Blue and Jubilee Silver two-tone, conjuring up the shimmer of the surrounding sea and the juxtaposed glass edifices that tower gleaming over the harbourfront. A single coachline in Blushing Pink darts across the shoulder line of the car and circles the blue wheel centres, drawing the eye to the contours of the vehicle just as the pink of the sky behind the mountain ranges at dusk ripples across the glass of the city’s buildings, or the warm hues of the night–time illuminations of the Gwangandaegyo suspension bridge dance in the waters of the bay. On the prow sits an illuminated Spirit of Ecstasy, adding further radiance. 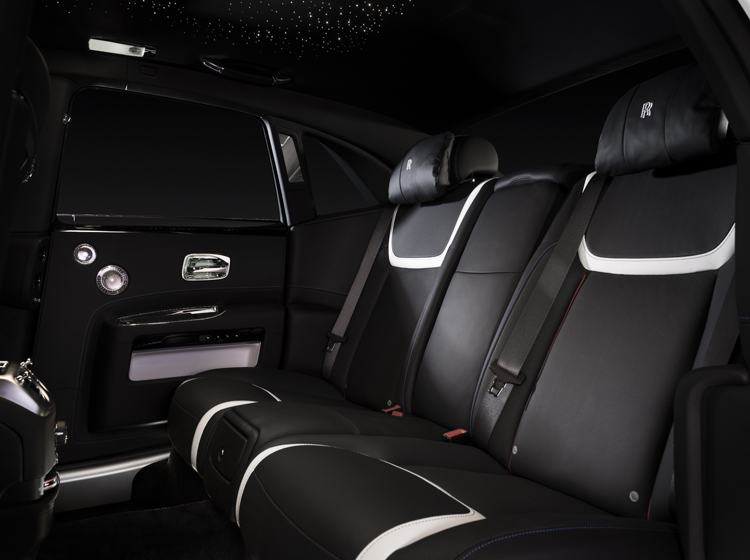 This lustrous theme continues inside, where seats bound in Selby Grey leather with Cobalto Blue accents are cocooned in a sea of Navy Blue, the Starlight Headliner glimmering above and Blushing Pink touches present in the stitching on the seats, instrument panel and ‘RR’ headrest monograms.

The architectural motif features as an inlay in the centre of the Piano Black fascia and is also incorporated as an abstract embroidery on the leather waterfall between the rear seats, creating a perfect environment to enjoy the 1300W, 18-channel Bespoke Audio system. 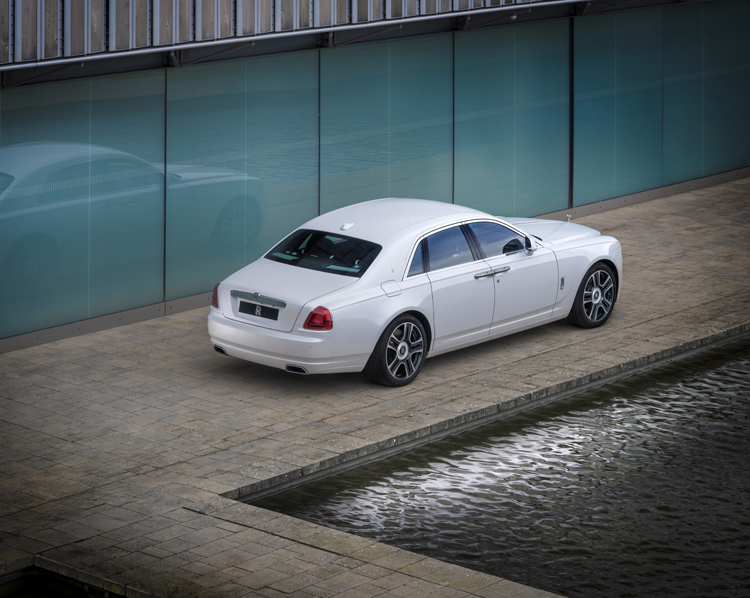