The heart of this project is not the frame or the engine, as one might expect, but rather the legendary ’70s/’80s Husqvarna tank, which makes the Honda FX650 Fusqvarna by Le Garage de Felix unusual.

As a nod to their craftsmanship, Le Garage de Felix has doctored the Husqvarna logo to feature an “f” instead of an “h” at the beginning of the branding, thus dubbing the motorcycle “Fusqvarna.” 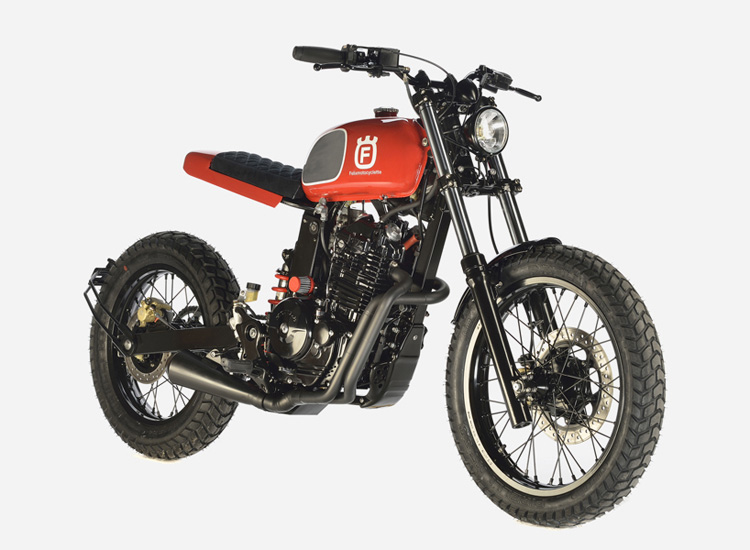 So they have given birth here to a Scrambler aimed at featuring this magnificent red and chrome tank. That’s why most of the parts on this bike are black, so as to better highlight the bright red of the tank / seat assembly. The only other touch of red is the rear shock spring, so as to visually enhance the mechanical part.

For the engine and chassis, Le Garage de Felix took a 2001 650 Honda FX as their base and stripped it of most of the elements that were not indispensable for the project, to just keep the essential. As is their habit, they took everything apart and reconditioned it component by component. Apart from just the air filter and jets, the engine is strictly original. 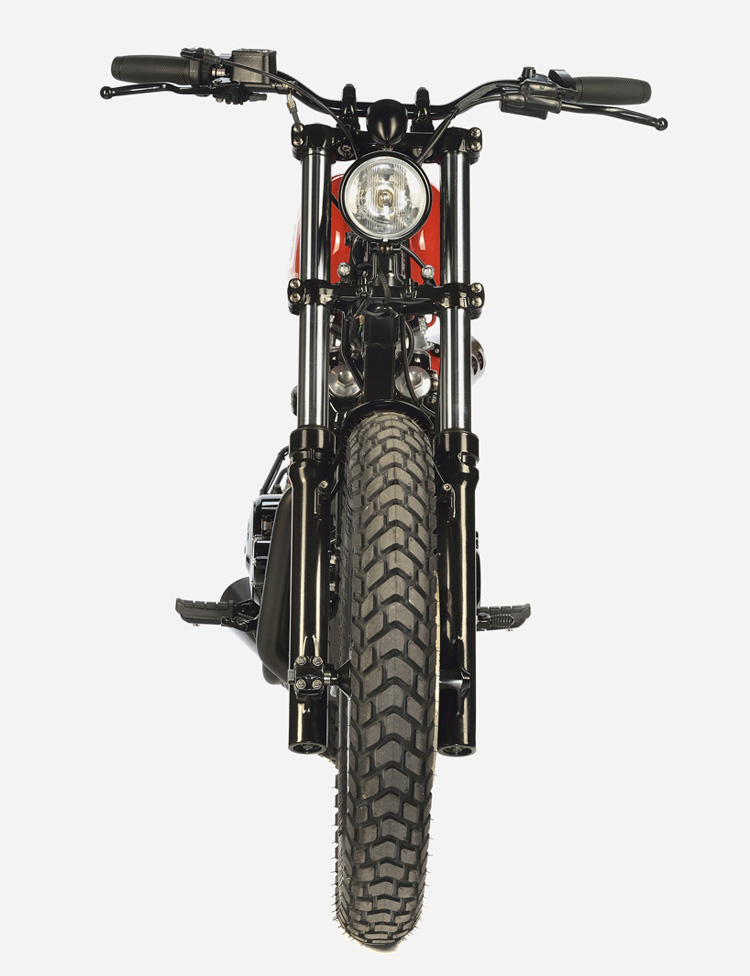 The rear subframe has quite simply been eliminated, limited to just a simple seat mount, which is what gives the bike all its character, giving the impression the seat and rider are suspended above the rear wheel. This seat, reduced to its simplest expression, is adorned with a covering of Alcantara with decorative stitching in a grid pattern. It’s mounted on a home-made aluminium shell, painted in the same red as the tank. 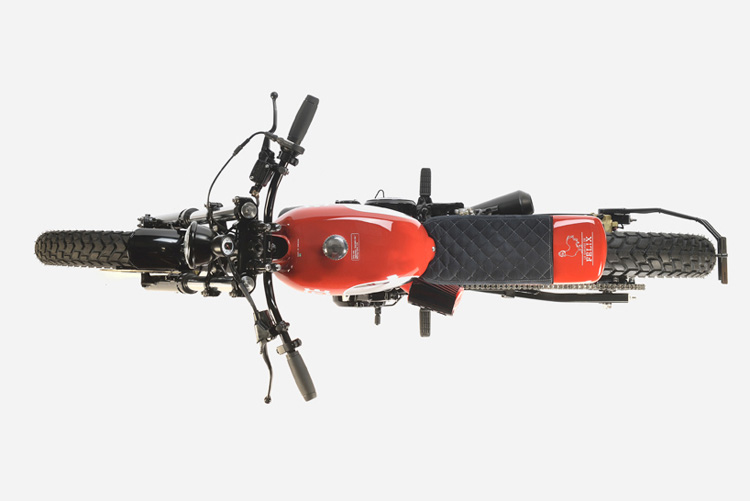 The riding position is limited to the essential, with no frills. The electrical side is entrusted to a number of Motogadget units. The design of the PIRELLI MT60 tyres adds just the right amount of aggressiveness to a beautifully effective black spoke/wheel combination.

The omnipresent black is of course found on the frame and engine, as it is on the superb Garage de Félix-made exhaust, which of course liberates that 650 cc 4-stroke engine. Since hearing is one of the five senses we always seek to stimulate in our creations, careful attention has been paid to how it sounds. 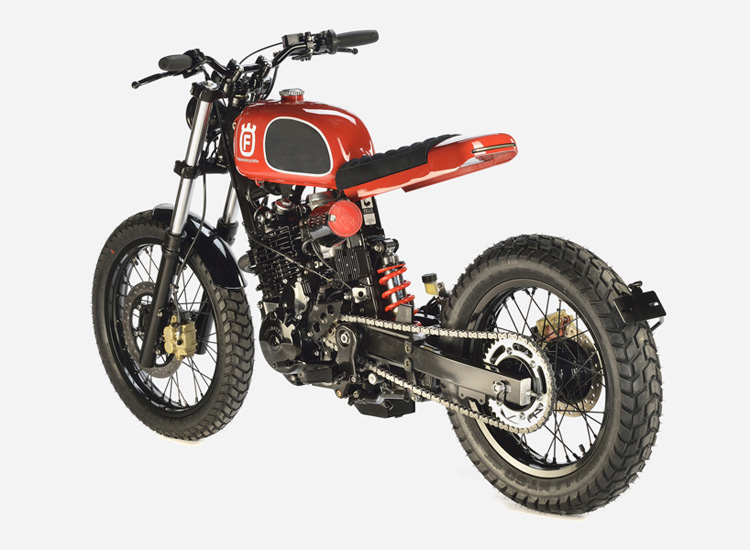 One detail that plays a part in decluttering the rear of the machine, while making it road-legal: the number plate bracket fixed to the rear wheel axle and running above the tyre, like a mini mudguard.

This Fusqvarna amazes by its extremely uncluttered look and this seat “hanging” in mid-air, but above all it succeeds in making the most of this red, white, and chrome tank, synonymous with the greatness of the Swedish machines in the ’70s and ’80s. 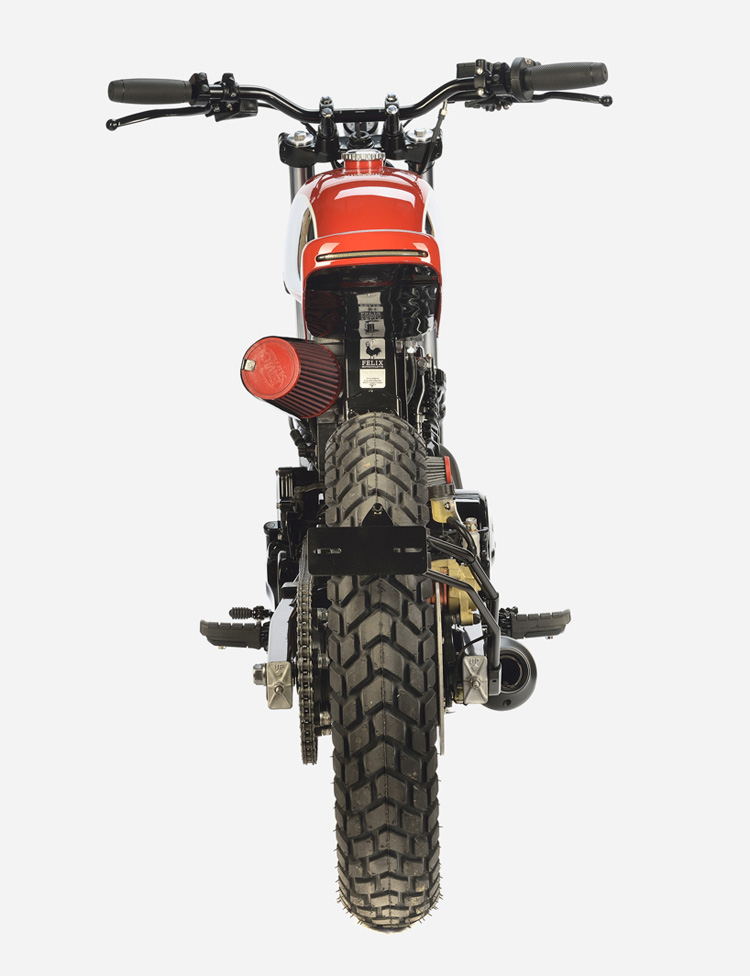