At this year’s Concours d’Elegance at Pebble Beach in California, Mercedes-Benz is once again set to present a highlight: the Vision Mercedes-Maybach 6 Cabriolet, a car which, with its sensual, emotionally appealing design and innovative technical concept solutions, defines the ultimate in luxury of the future. At the same time the two-seater model pays homage to the glorious “automotive haute couture” of hand-finished, exclusive cabriolets. The glamorous cabriolet reinterprets classic, emotional design principles in an extravagant way and combines intelligent beauty with classic, aesthetic proportions and a reduced, technoid appearance – a perfect embodiment of the design philosophy of Sensual Purity. 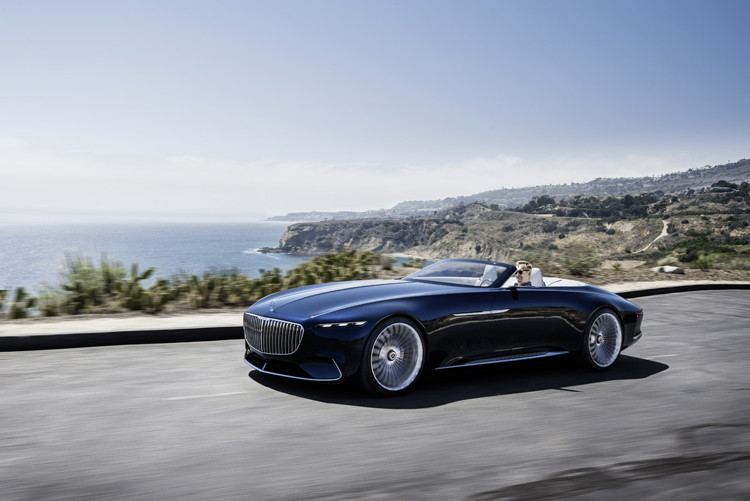 The Vision Mercedes-Maybach 6 Cabriolet is designed as an electric car. The drive system has an output of 550 kW (750 hp). The shallow underfloor battery allows a range of over 500 kilometres according to the NEDC (over 200 miles according to EPA).

The quick-charge function is also visionary: as a result of DC charging based on the CCS standard, the system allows a charging capacity of up to 350 kW. In just five minutes enough power can be charged to achieve an additional range of around 100 kilometres. 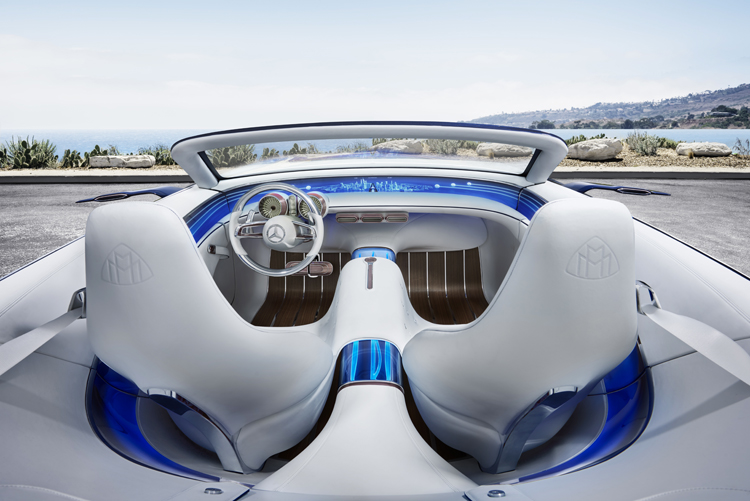 Measuring almost six metres in length, the Vision Mercedes-Maybach 6 Cabriolet incorporates the classic proportions of art deco design with its extremely long bonnet and puristic, flowing lines, and at the same time completely reinterprets these aesthetic principles. The curved basic body boasts a sporty, stretched design which is characterised by powerful structural elements in conjunction with the sharp feature line. This side feature line defines the upper vehicle body, from the radiator grille across the entire length of the vehicle through to the rear. 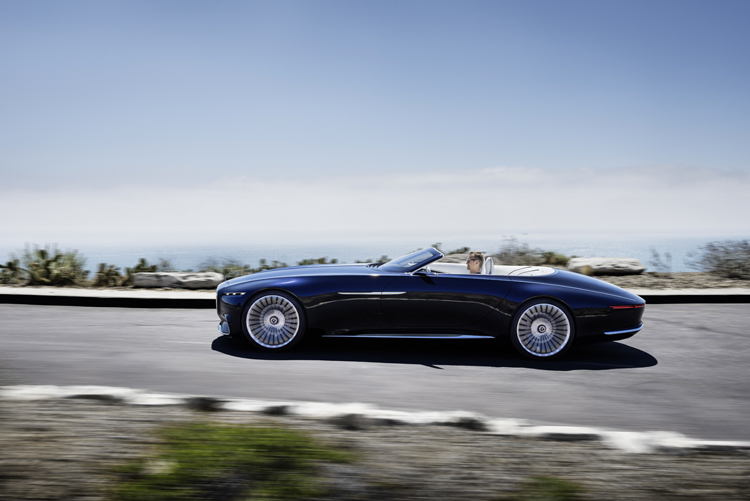 The strong contrast between the dark blue paintwork in “nautical blue metallic” and the chrome highlights increases the fascinating relationship between the clearly defined areas with organically shaped wings and the chrome trim elements, which sit at the top on the edge of the wing as well as in the middle on the boot lid, where they also incorporate the vertical brake lights. This benefits the interpretation of the Mercedes-Maybach radiator grille, which with its fine, vertical struts accentuates the front end. The grille was inspired by a pinstriped suit.

The newly designed 24-inch light-alloy wheels feature a centre lock. This is painted in rose gold and as such reflects the colour shade used on all electric vehicle studies from Mercedes-Benz. 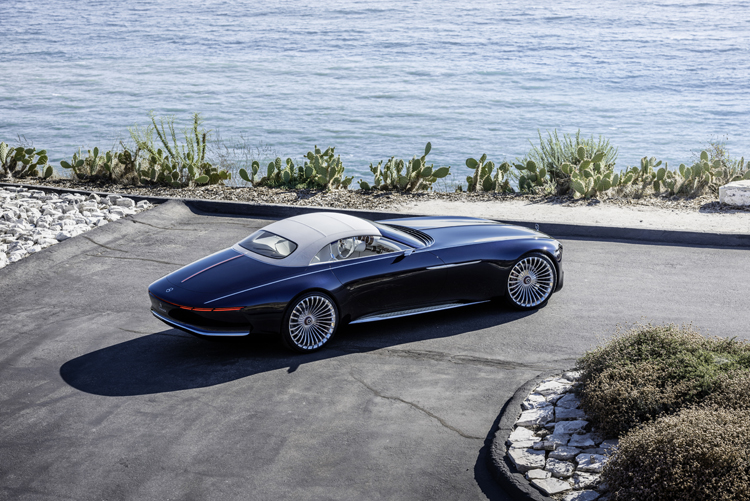 The extended, round “boat tail” format of the Vision Mercedes-Maybach 6 Cabriolet’s rear recalls a luxury yacht, and narrow tail lights which emphasise the width of the vehicle are integrated in its outer edges. Further distinctive features at the rear include the diffuser with aluminium frame and the air outlets behind the wheel arches. 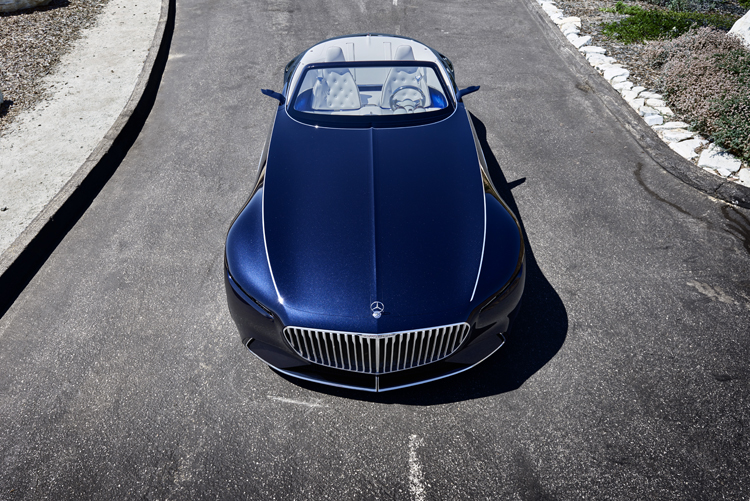 The transition between the vehicle rear, the area of the boot lid and the interior boasts a flowing design. Crystal white high-quality nappa leather creates an exciting contrast to the dark paint finish. The custom-made fabric top with interwoven rose gold threads has been perfectly coordinated with the look of the vehicle.

The formal flow of the areas from the rear into the interior gives rise to a typical yacht feeling. A light wing flows in a curve across the door trim and the centre tunnel into the seat landscape, creating a 360° open-air luxury lounge. 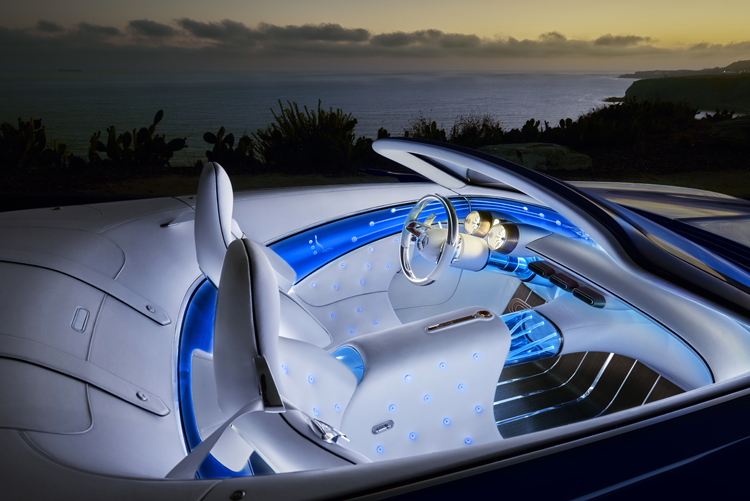 The new “inside out” spatial design adds a particularly special feature. The sitting surface forms a horizontal plane, transitions into the vertical plane of the doors and finally becomes the underside of the dashboard wing.

Above the 360° luxury lounge, the display strip links doors, dashboard and the rear area. All display elements are integrated into the continuous glass trim part. By way of contrast, classic round dials, such as the instrument cluster, are positioned prominently. The combination of digital displays with real needles is also totally on trend. By using “hyperanalogue” elements, the designers are responding to the need of people to experience analogue luxury in what is an increasingly digital world. As a classic borrowing from aviation, three air vents are positioned beneath the wing which appear to float like engines. 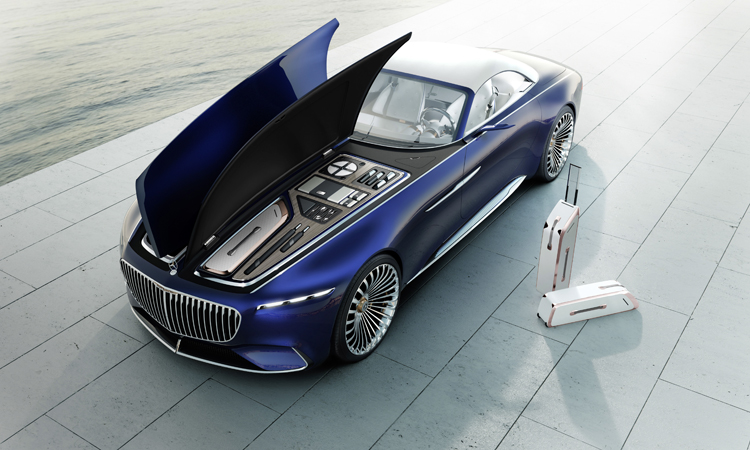 Another highlight comes courtesy of the floating, transparent centre tunnel, which visualises the drive system’s electrical energy flow for the passengers by means of blue fibre optics. The main driving functions as well as information relevant to the location (e.g. restaurant recommendations or information on points of interest) are shown on the windscreen via two head-up displays.

all images and video courtesy of Daimler Chrysler Ag