At this year’s Frankfurt International Motor Show, China’s Borgward has unveiled an ultra-luxury electric car, the Isabella concept. Unlike many other studies, the Borgward Isabella Concept is more than just a vision of a future vehicle concept. On the contrary, the main development goal for the reincarnation of the legendary Isabella from the 1950s was the creation of a characteristic design DNA that would serve as the future focus of the entire Borgward company.

The design idiom of the four-door, four-seat concept coupe is based on Borgward’s “Impressions of Flow” design principle, which will be valid for all vehicles in the future. The Borgward Isabella Concept impresses with its perfect dimensions (5.00 meters long, 1.40 meters high, and 1.92 meters wide) and the beauty of its flowing three-dimensional and sculptural shapes, which are smoothly connected to technical and functional elements such as the cooling air inlets and the aerodynamic components-without any aggressive undertone.

The Isabella Concept’s harmonious appearance, with its characteristic flowing transitions between the individual body sections, is enhanced by the “graphic tech fade” coloring. The graphic is based on Borgward’s diamond-shaped brand logo and is a futuristic interpretation of the two-tone paint job of the original Isabella models. The vehicle’s two tones, Zeitgeist Blue1 and Zeitgeist Blue2, fade out in the transition zones between the hood and the windshield, the windshield and the roof, and the rear window and the rear hatch with its distinctive diamond-shaped graphic. 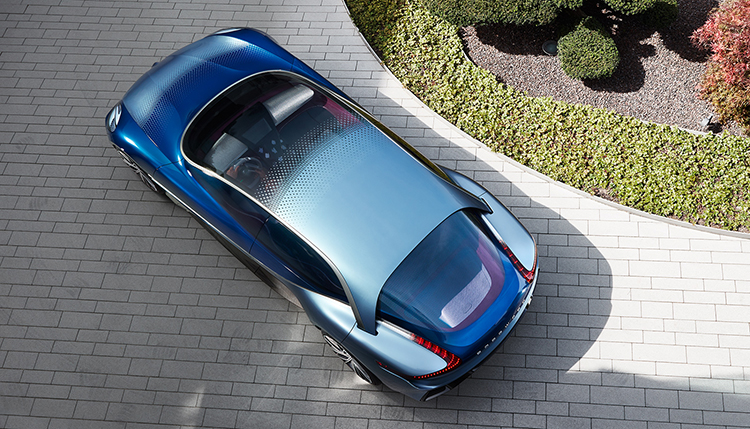 As an all-electric coupe, the Isabella Concept represents the future of Borgward. The company already decided during the conceptual phase to dispense with the Octagon radiator grille, which had been a classic feature of the BX models to date. Instead, it chose to create a striking new brand-specific look with a substantially accentuated diamond-shaped Borgward logo as its key element. As a result, the homogeneous and largely closed front section radiates progressiveness and appeal. The prominently positioned diamond-shaped Borgward logo is emphasized by the two futuristic headlights, whose contours and graphic elements also cite the diamond-shaped logo. The headlights view their automotive surroundings with a piercing gaze and at the same time form a harmonious connecting element between the fenders and the sporty flat hood of the electric motor.

The design of the lower front section fulfills the aerodynamic requirements for making the flow of air through and around the vehicle as efficient as possible. In cooperation with the aerodynamics experts, the designers integrated the cooling air inlets in such a way that they enable the air to flow through the wheel housings in order to effectively cool the brakes, for example. 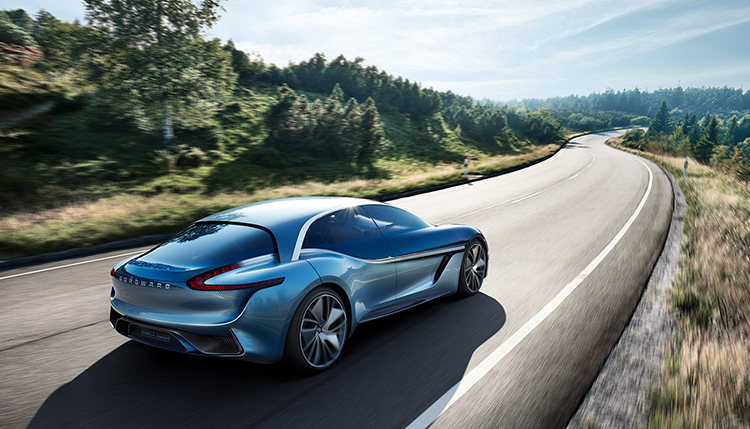 The vehicle is as sporty and elegant as a coupe and combines these features with the modern interpretation of a four-door sports sedan. This is enriched by a windshield that is strongly pulled forward in the style of a super sports car. As a result, the Isabella Concept proudly expresses its strong forward thrust even when it’s standing still. However, the real eyecatcher when viewed from the side is the future-oriented transformation of the classic Isabella’s swinging hips-a reminder of the early decade of Germany’s “economic miracle,” when unbridled optimism was the order of the day. This charming hip line is accentuated by an aluminum trim that visually extends the entire side view.

In the vehicle’s rear, the elegant curve merges smoothly into the seamlessly integrated slim tail-light bands. The design team headed by Anders Warming chose the modern lines of the Isabella for more reasons than just stylistic ones. They encompass technical features such as sensors for the driver assistance systems and the electronically operated flush-mounted door openers. 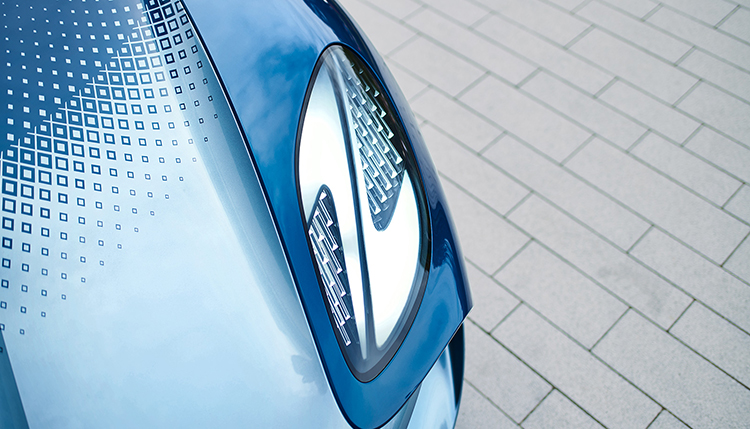 Behind the front wheels are two free-standing vertical spoilers that enable air to perfectly ventilate the wheel housings by being actively channeled through them, as well as flowing around the vehicle’s flanks. This is also where the lenses of the two optoelectronic side-view mirrors are integrated. They replace the conventional rear-view mirrors and also reduce wind resistance. There is also a flow of air through the two free-standing C-pillars, which additionally generate the downforce on the rear axle that is needed for maintaining driving stability.

Thanks to doors that open in opposite directions, front and rear-seat passengers can easily get in and out of the vehicle, especially because the highly stable Isabella body has no B-pillars. A clever swinging/sliding mechanism lets the doors slide forward and backward and provides an unobstructed view of the lounge-like interior. The dynamically sporty design of the Isabella Concept is also energy-efficient and is accentuated by large 21-inch wheels. 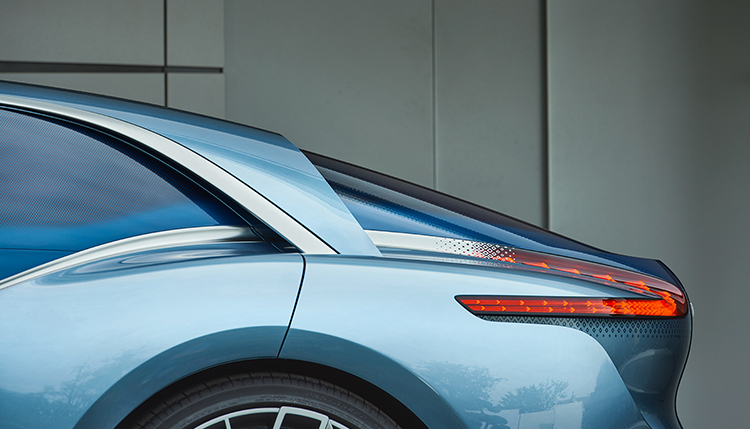 The automotive world is being thoroughly transformed, and it’s looking for ways to harmonize the digital universe with traditional aspects of individual mobility. This becomes especially clear in car interiors, which will change greatly in the future.

The main eyecatcher in the front section of the Borgward Isabella Concept’s interior is the futuristic Surfboard instrument panel. It seems to float freely in space and is only connected to the middle of the center console. In turn, the console, which is called the Scarf, serves as the central element that flows around the space separating the driver from the front passenger. The upper section contains a holographic display that can three-dimensionally depict a wide variety of services ranging from 3D navigation and reservation systems to vehicle menus. Under this display are the raised three-dimensional interaction surfaces that are operated by means of touchscreen technology. 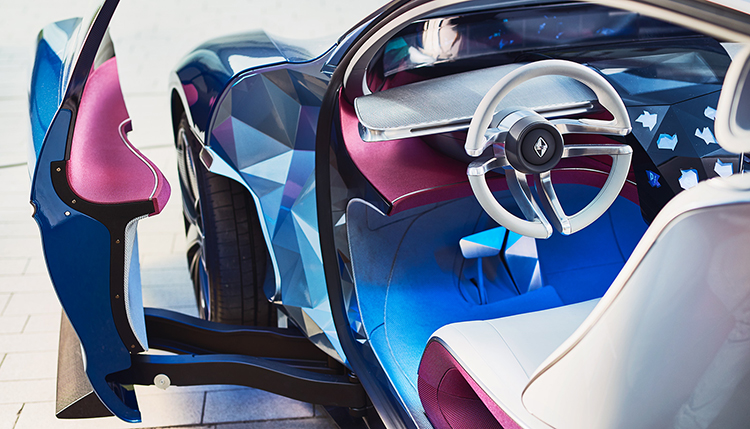 The display concept is augmented by a seamlessly integrated display that extends beneath the windshield across the entire width of the vehicle, links the two A-pillars with one another, and further enhances the interior’s spacious feel. The windshield is strongly pulled forward in the style of classic super sports cars. It also pushes this display far to the front, which makes it easier for the eyes to accommodate themselves when the driver switches back and forth between looking at the display and the road. In addition to a variety of infotainment content, the images from the side-mounted exterior cameras are shown at the extreme left and right of the display. This eliminates the need for a conventional rear-view mirror. 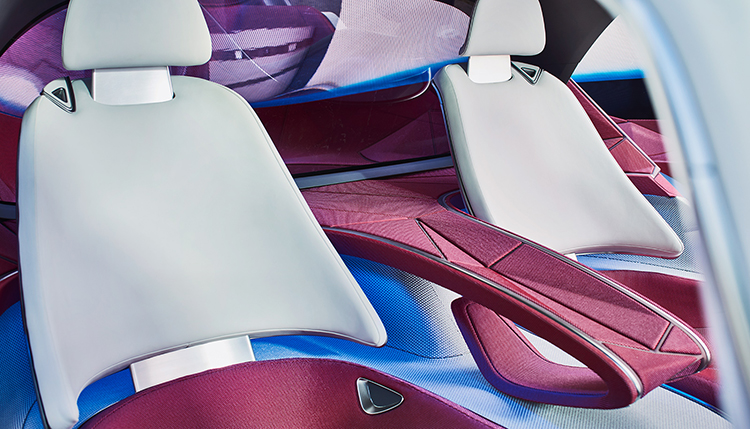 The puristic steering wheel is used exclusively for its original purpose and the designers have deliberately decided to dispense with the excessive number of switches, buttons, and rollers that have become common nowadays. As a result, the classic steering wheel forms a nice contrast to the triangulated avant-garde user interface of the Scarf.

The intricately shaped individual sculptured seats, which are a design statement in and of themselves, remind viewers of the free-swinging, high-quality seats in modern apartments and form an appealing contrast to the complex designs of the interior surfaces. 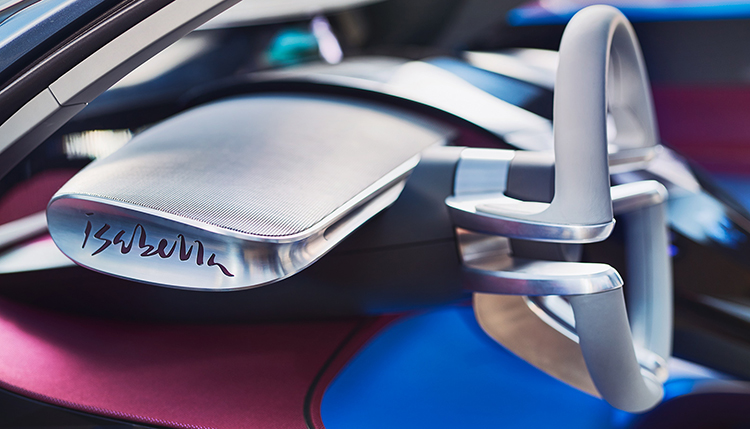 The eAWD electronic control and electric motors at both the front and the rear axle turn the Isabella Concept into an all-wheel-drive vehicle with a fully variable torque distribution system. The two permanent magnet synchronous motors with integrated converters have a combined output of 220 kW/300 hp, deliver a maximum torque of 450 Newton meters and unite, in line with the driver’s wishes, sporty performance and handling with the highest degree of efficiency. As a result, the vehicle accelerates from 0 to 62 mph in 4.5 seconds, and its thunderous forward thrust does not end until 155 mph is reached. 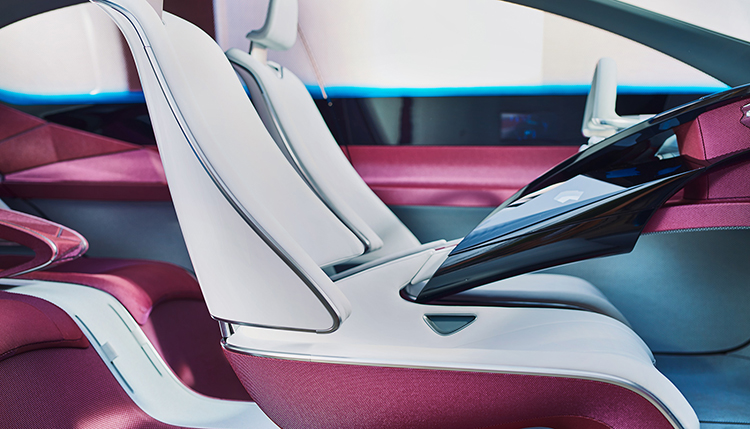 all images and video courtesy of Borgward