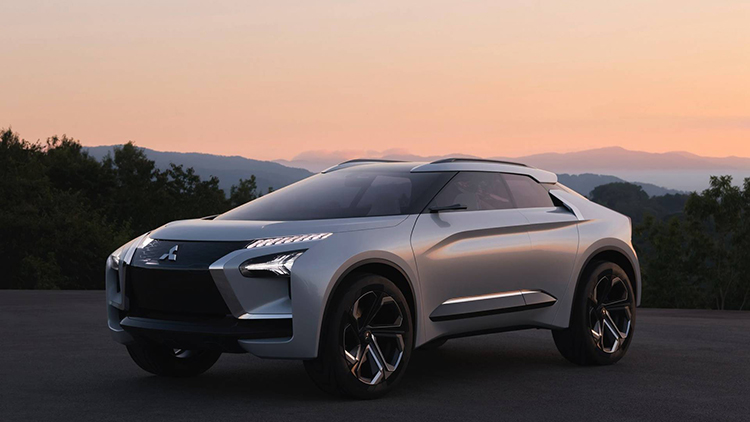 Mistubishi has a long and strong heritage. Think of “Mitsubishi Motors,” and proven off-road performance, along with superior 4WD control come to mind. Now, the banner of superior, high-performance 4WD control is carried forward by the Mitsubishi e-Evolution Concept. The design expresses the readiness to grip the ground with all four-wheels, and the agility of a high performance cross-country tourer. 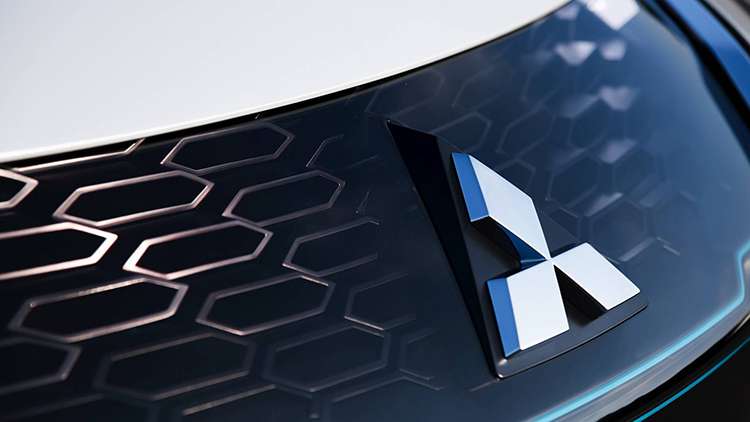 The front face design of the Mitsubishi e-Evolution Concept is a fresh take on Mistubishi’s archetypal Dynamic Shield design. The black grille is shielded under glass, a subtle hint that this car is a high performance electric vehicle. Protected under the glass, and accentuated by blue lines for emphasis, sit cameras and sensors. Large air intakes are located beneath the headlamps, ready to cool the electric brake calipers. Adding to the vehicle’s excellent aerodynamics, the drawn-in air passes jet tailfins on the C-pillars before exiting on either side of the rear bumper. 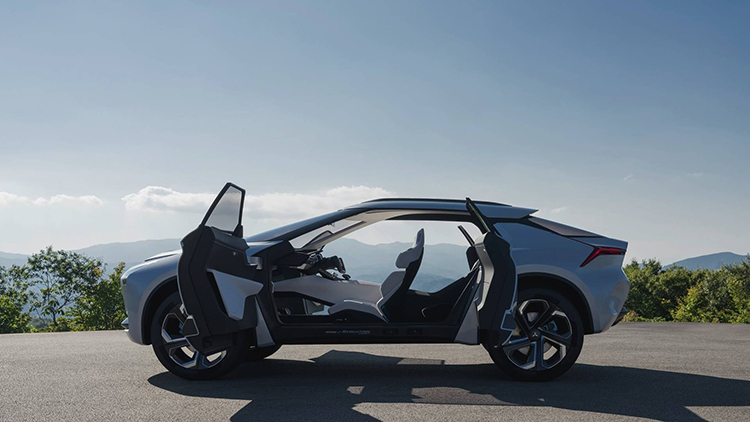 A sharply slanted front windshield and short overhangs give the Mitsubishi e-Evolution Concepta unique side profile that has not been possible before the arrival of electric propulsion. High ground clearance, short overhangs, strong shoulders, and narrow hips project nimbleness and agility. Muscular tires that protrude at the four corners communicate powerful 4WD torque. Bars running from front to rear along either side of the roof enhance the vehicle’s muscular attitude. 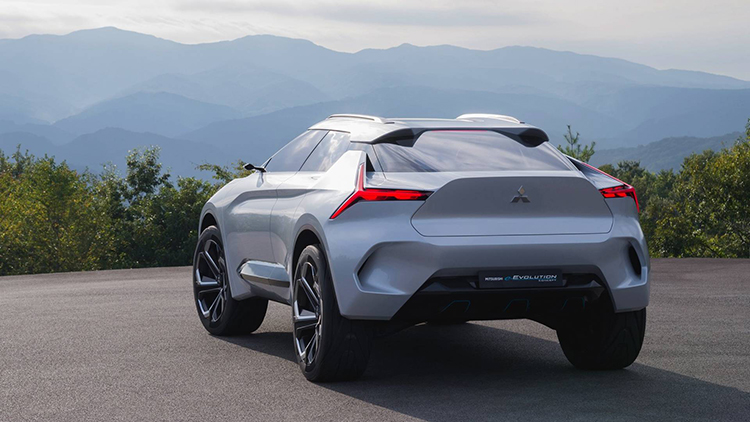 The large hexagon shape at the rear draws inspiration from the spare tire cover of the quintessential SUV, the legendary Mitsubishi Pajero, a hallmark of off-road driving, and one of the most iconic chapters of MMC’s heritage. 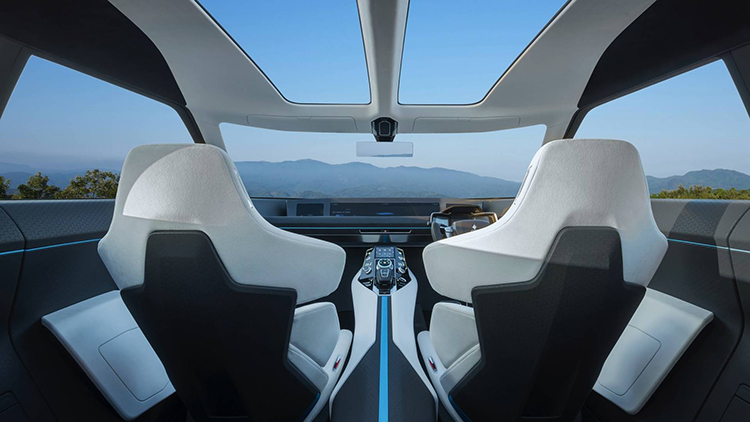 Inside, the cockpit of the is a technical prototype to illustrate the strategic direction of a renewed shows that its designers suddenly had the freedom to go beyond the traditional firewall. The Mitsubishi e-Evolution Concept is powered by three torqueful electric motors, and the absence of a big internal combustion engine under the hood gave designers the space to realize a radically novel cockpit. Its instrument panel appears to float in front of the driver. 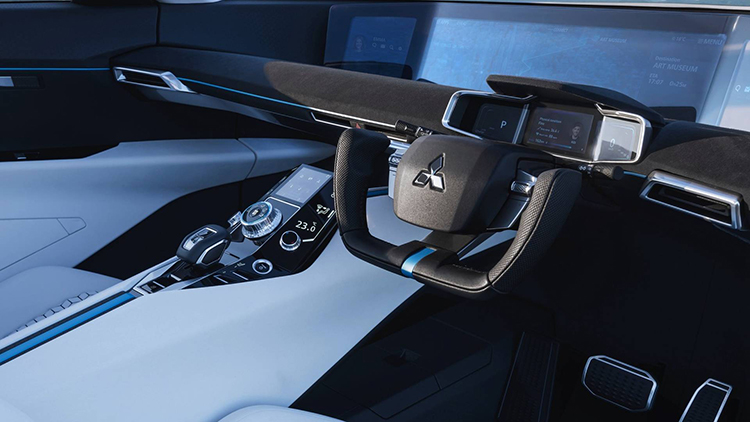 It is a Mitsubishi vehicle, and the instrument panel adopts brand’s trademark horizontal styling, with the focus on information above the axis and on operation below. Acting like a level in an electronic viewfinder, the horizontal instrument panel makes it easier to sense the state of the vehicle during driving – form follows function well down the road. 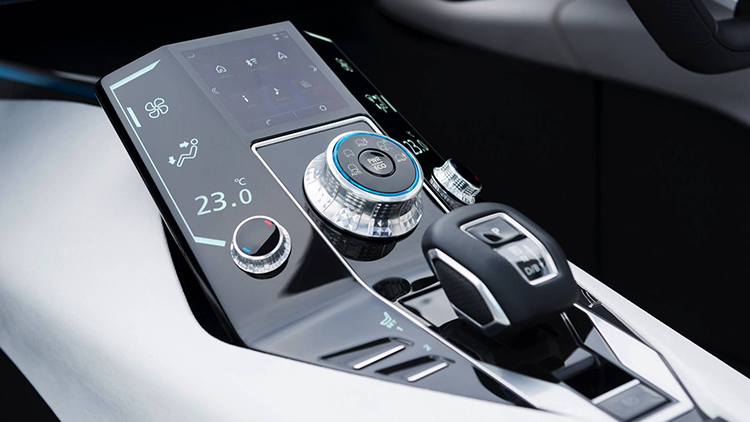 A large flat screen spans the full width of the dashboard. It displays outside conditions, navigation and coaching information. The large screen is flanked by two smaller screens, showing images from front and rear cameras. Full-glass windows provide near unobstructed 360-degree visibility, for a feeling more akin to a jet fighter than a car. 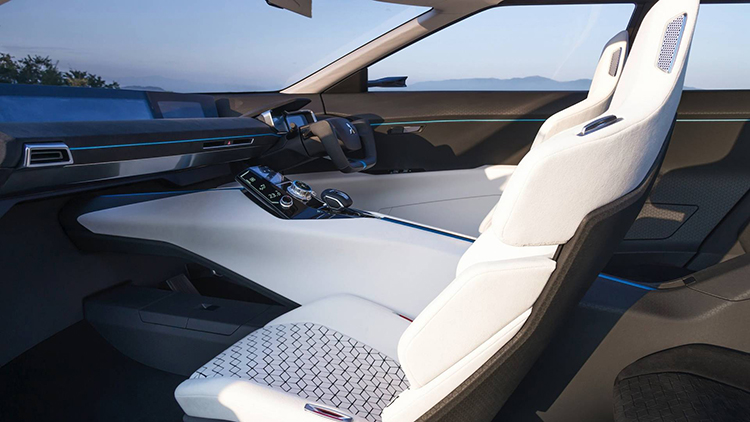 The brain of the Mitsubishi e-Evolution Concept is an Artificial Intelligence (AI) system that augments the driver’s capabilities. An array of sensors allows the AI system to instantly read changes in road and traffic conditions, as well as the driver’s intent. Seamlessly coordinating driver intent with vehicle performance, the system supports drivers of all abilities. By making it easier and safer to control the vehicle, the motoring experience is brought to a new level. A special coaching function allows the AI system to transfer knowledge to the driver, and to unobtrusively enhance the driving expertise. After building a picture of the driver’s skill level, the system constructs a training program that provides advice through voice dialogue and a large dashboard display. As a result, drivers of all abilities quickly experience a vehicle that behaves the way they want it, and soon they find themselves enjoying the driving experience to an even greater degree.

all images and video courtesy of Mitsubishi