Microsoft has unveiled a new Surface Hub 2 with a 50.5-inch greater than 4K display that rotates 90-degrees and is designed for collaborative working.

The Surface Hub 2 has been designed to help people work together and “get out of their seats, ideate, create and dynamically collaborate as a team, regardless of location”, Panos Panay, Microsoft’s Chief Product Officer, wrote in a blog post.

Unlike the original Surface Hub, which was released in 2015, the new device can be rotated, so users can work on the multi-touch display in either landscape or portrait mode. As the cameras, speakers and microphones are built into the device, they will pivot, too. Four Hubs can also be connected together in a move known as “Tiling”, creating one canvas for a PowerPoint presentation or video call, for example. 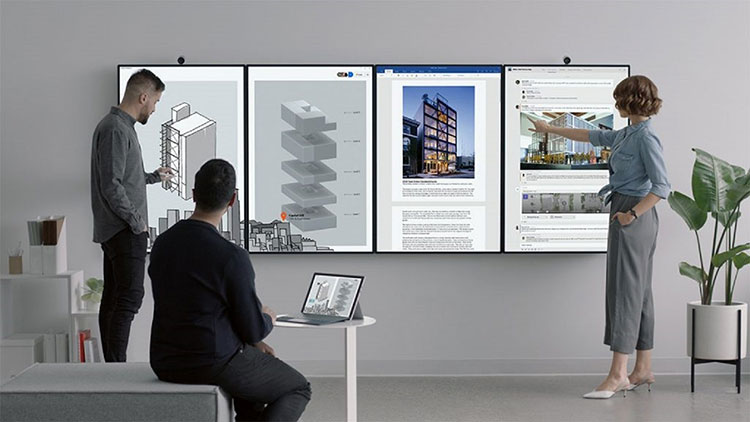 “Tiling is one of my favourite features on Surface Hub 2,” Panay wrote. “Seeing four of the beautiful Surface Hub 2s lined up together not only makes an undeniable visual impact, it can also have a profound impact on what groups can accomplish together, allowing users to display multiple pieces of content side by side. Imagine how much your team could get done being able to work simultaneously across Microsoft Whiteboard, PowerBI, PowerPoint and a full-view video call.” This will let people have “face-to-face” meetings from anywhere in the world, he added.

Microsoft has also teamed up with workplace experts Steelcase to give the Surface Hub 2 a system of rolling stands and easy-to-use mounts, making it easier to move the device around offices. Multiple people can then sign in to access their documents at the same time, allowing them to share ideas and work on one screen using the Surface pen or fingers.

The Surface Hub 2 will be available to buy in 2019, with prices released at a later date. The original Surface Hub was unveiled at Microsoft’s Windows 10 Devices Event three years ago and is available in a 55-inch version and an 84-inch model. It is currently being used by students at the Royal Academy of Music, in London, to compose music while video-calling their professor; while the University of Bristol (above) is using the device to further its biomedical and clinical sciences research.