At L.A. Auto Show, Porsche has unveiled the eighth generation of an icon, the new 2020 Porsche 911. Unmistakably committed to the Porsche design DNA, a much more muscular look, and an interior featuring a 10.9-inch touchscreen monitor, the new 911 is timeless – and modern. Intelligent control and chassis elements as well as innovative assistance systems combine the masterfully uncompromising dynamism that the classic rear-engine sportscar is famed for, with the demands of the digital world.

The next generation of flat-six turbocharged engines has been further developed and is more powerful than ever before, with 331 kW (450 PS) in the S models. The drive efficiency has been increased by way of an improved injection process and a new layout for the turbochargers and charge air cooling system. The power is delivered by a newly developed eight-speed dual-clutch transmission.

Additional highlights include the new assistance systems, including Porsche Wet mode to make driving on wet roads even safer, and Night Vision Assist with a thermal imaging camera, as well as comprehensive connectivity – which now also uses swarm intelligence. The 911’s features are rounded off by three exclusive digital offerings: the Porsche Road Trip app for extraordinary tours, the Porsche 360+ personal assistant, and the web-based Porsche Impact emissions calculator for neutralising your individual carbon footprint. 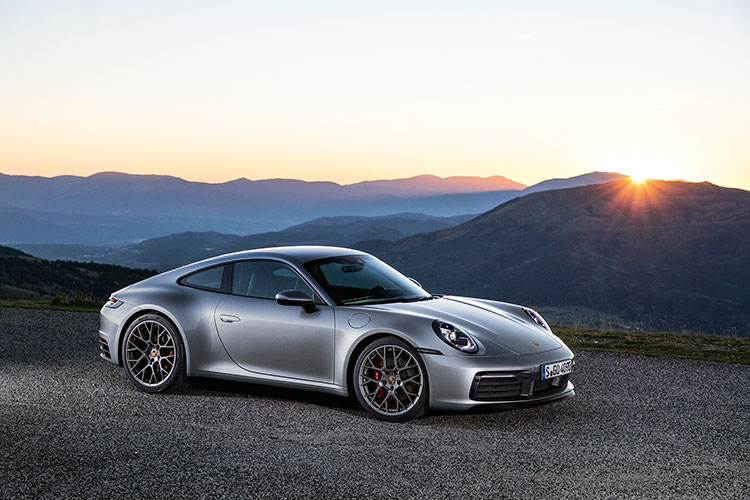 The turbocharged flat-six engine of the 911 Carrera S and 911 Carrera 4S now produces 331 kW (450 PS). This corresponds to an increase of 22 kW (30 PS) compared with the previous model. Both 911 models beat the four-second mark for acceleration from zero to 100 km/h: the rear-wheel-drive Coupé needs 3.7 seconds and the 911 Carrera 4S with all-wheel drive just 3.6 seconds. This makes both cars 0.4 seconds faster than the previous model in each case. This advantage is increased by a further 0.2 seconds with the optional Sport Chrono Package. The top speeds are now 308 km/h (911 Carrera S) and 306 km/h for the all-wheel-drive version. The fuel consumption (NEDC-correlated) of the 911 Carrera S is 8.9 l/100 km, while the 911 Carrera 4 S records this figure as 9.0 l/100 km. 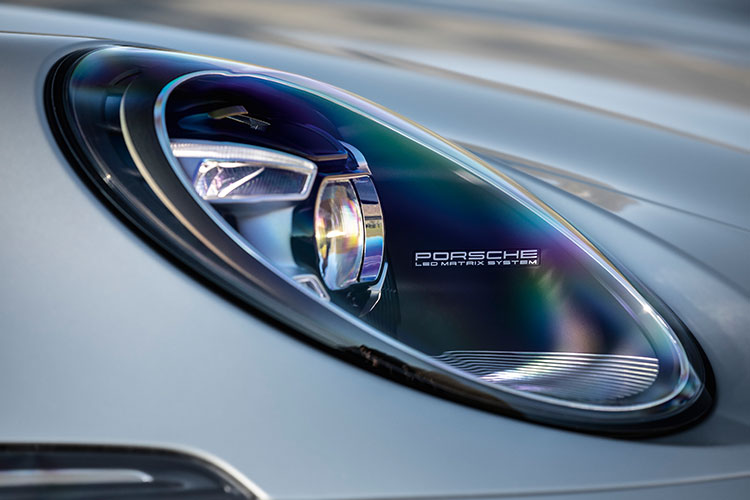 The exterior design is completely new and emphasizes the leap in performance for the 911 type 992. Significantly wider wheel housings arch over the 20-inch front wheels and 21-inch rear wheels. The rear end is now the same width across all models, highlighting the slimline centre section.

At the front, the body is 45 mm wider. Flush integration of the electrical pop-out handles in the doors emphasizes the tapered and smooth side contour. Between the new LED headlights, a bonnet with a pronounced recess evokes the design of the first 911 generations. The rear is dominated on all models by the significantly wider, variable-position rear spoiler and the seamless, elegant light bar. Apart from the front and rear sections, the entire outer skin is now made from aluminum.

The completely new interior is characterized by the clear and straight lines of the dashboard with recessed instruments. The 911 models from the 1970s provided the inspiration here. Alongside the central rev counter – typical for Porsche – two thin, frameless freeform displays supply information to the driver. 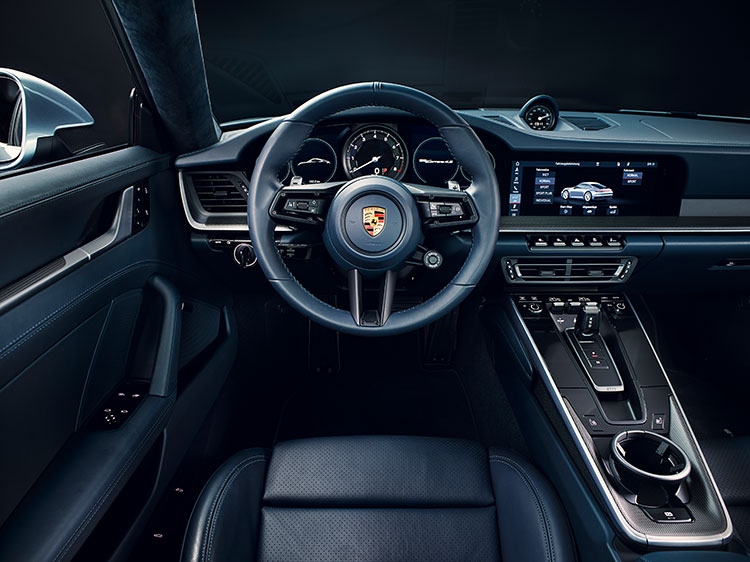 The centre screen of the PCM is now 10.9 inches and can be operated quickly and without distraction thanks to the new architecture. Located underneath this there is a compact switch unit with five buttons for direct access to important vehicle functions. In terms of digitalization, the 911 takes the next step into the future with permanent connectivity as well as new functions and services. The standard PCM features include online navigation based on swarm data as well as Porsche Connect Plus. 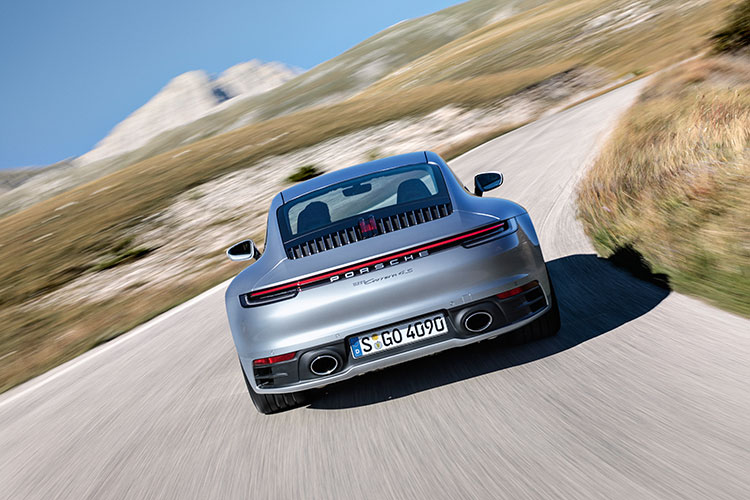 In a world first, Porsche has developed Wet mode, included as standard. This function detects water on the road, preconditions the control systems accordingly and warns the driver, who can then set up the vehicle for a particular emphasis on safety, by simply pushing a button or using the mode switch on the steering wheel (Sport Chrono Package). The warning and brake assist system, also fitted as standard, detects the risk of collisions with moving objects and initiates emergency braking if necessary.

Night Vision Assist with a thermal imaging camera is optionally available for the 911 for the first time. The adaptive cruise control option includes automatic distance control, stop-and-go function, reversible occupant protection and an innovative autonomous Emergency Assist function. The 2020 911 Carrera S will have a base price of $114,250 USD and the Carrera 4S will start at $121,650 USD, both including $1,050 USD delivery charge.