Sony has introduced an exciting new addition to its highly popular compact camera line-up with the launch of the world’s smallest and lightest premium compact camera, the RX0 II. Building upon the waterproof/dustproofii,shockproof, crushproof and ultra-compact qualities of the original RX0, the new model now offers internal 4K recording, an up to 180-degree and down to 90-degree tiltable LCD screen that even works underwater[ix],iiand new image stabilisation solutions for video recording. 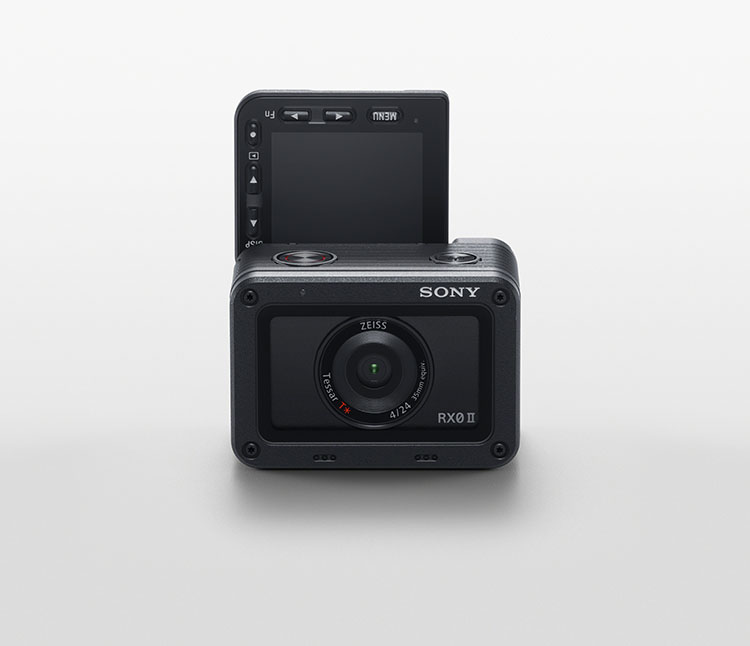 At the heart of the RX0 II sits a 1.0-type stacked 15.3-megapixeli Exmor RSTM CMOS image sensor and an advanced BIONZ XTM image processing engine that offer enhanced colour reproduction including beautiful skin tones. This power packed combination have been optimised to deliver lightning fast performance and exquisite image quality for both stills and movie shooting across a wide sensitivity range of ISO 80-12800. The ZEISS Tessar T 24mmiii F4.0 fixed wide-angle lens has a shortened minimum focussing distance of 20cm, making it perfect for selfies or table-top photos.

The RX0 II is truly a ‘worry-free’ camera that can be taken into places that no other camera can go. Measuring just 59mm x 40.5mm x 35mm and weighing just 132g, the RX0 II fitseasily into a pocket and is ready for whatever the elements can throw at it. It is waterproofii up to 10 metres deep, dustproofii, shockproofvii up to 2 metres and crushproofviii up to 200KG force. 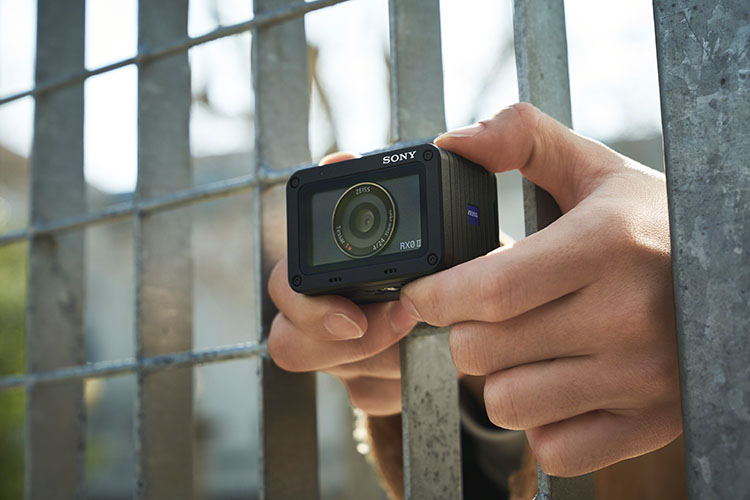 “The development goal of the original RX0 was to build a camera that enabled new forms of creative expression through its form factor and technical capabilities,” said Yann Salmon Legagneur, Director of Product Marketing, Digital Imaging at Sony Europe. “We have built upon this with the new RX0 II and added features and functionality that we believe make this an ideal camera for any type of travel and will perform equally well as a stills or video camera across a huge range of shooting and vlogging scenarios.” 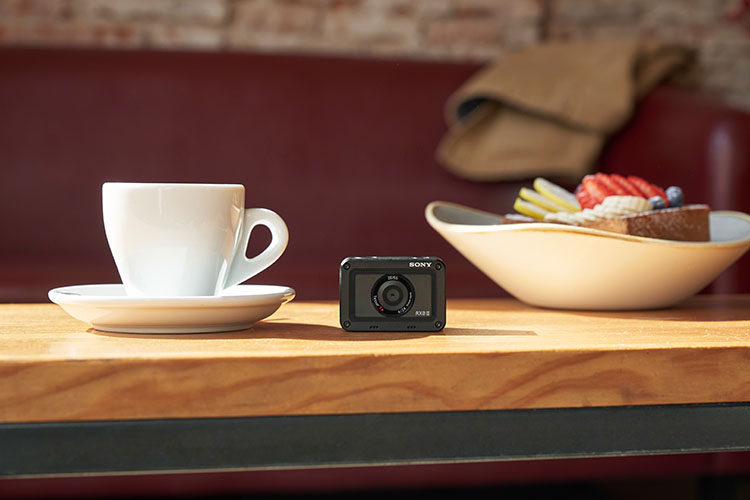 The RX0 II offers 4K 30p internal movie recordingiv with full pixel readout and no pixel binning to collect approximately 1.7 times the amount of data required for 4K video. This oversampling reduces the appearance of moiré and jaggies and delivers smooth, high quality 4K footage with exceptional detail and depth. Using the recently introduced Sony “Imaging EdgeTM”mobile applications, this footage can be transferred to a smartphone, edited and shared easily across social networks.

The RX0 II introduces in-body electronic stabilisation for steady footage, even when shot handheld. This can be enhanced even further when footage is exported to a smartphone or tablet running the ‘Movie Edit add-on’ application where the additional information captured during filming can be processed to produce a video with gimbal-like smoothness.

An additional new feature that can be accessed via Sony ‘Movie Edit add-on’ is ‘Intelligent Framing’ where the selected subject is kept in the centre of the frame and image distortion is corrected in a final edit. Depending on where the video will be shared, the required aspect ratio can then be selected. Additional movie features of the RX0 II include Super Slow Motion recording at up to 1000 fps, uncompressed 4K HDMI output and simultaneous proxy movie recording. Users can utilise Picture Profile, S-Log2 and Time Code / User Bit functions to ensure a final result that exactly matches their creative vision. 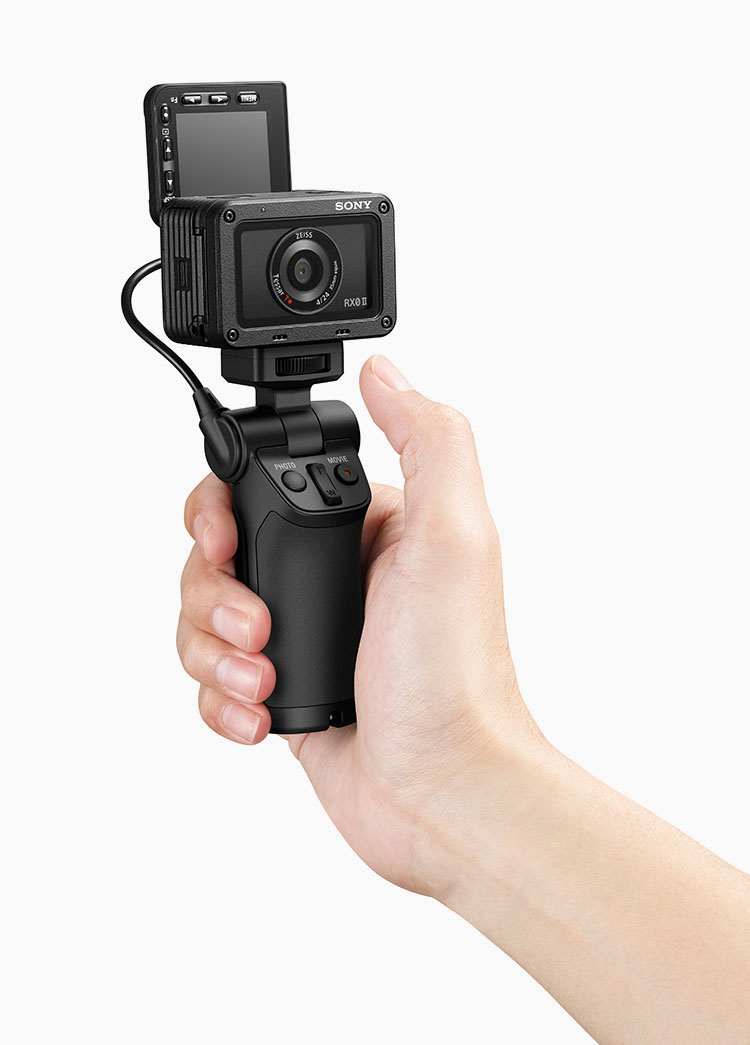 The versatility of the RX0 II means thatit offers a host of stills photography features in addition to its video capabilities. It boasts an Anti-distortion Shutter of up to 1/32000 sec. and can shoot at up to 16 fpsv to capture any fleeting moment of emotion that passes across the subject’s face. In an upgrade from the original RX0, colour reproduction has been enhanced to reproduce natural and vivid colours of human skin, and the optional ‘Soft Skin Effect’ can be applied to cover minor blemishes and wrinkles.Rating and Protect functions can be applied in camera and a grouped display of continuously shot images can be viewed on the camera.

Sony’s EyeAF, that is proving hugely popular with portrait photographers across the world, has been upgraded on the RX0 II. Thespeed, accuracy and operation of the EyeAF has been improved to make it even easier to capture a stunning portrait; a simple half press of the shutter button will lock-on to the eye of the subject. The focussed eye can be selected (left / right / auto) in the menu or assigned to a custom button, allowing the user to concentrate on composition. The camera can be set for interval shooting, the results of which can be edited with Sony’s “Imaging Edge”desktop application ‘viewer’ into stunning time-lapse videos. 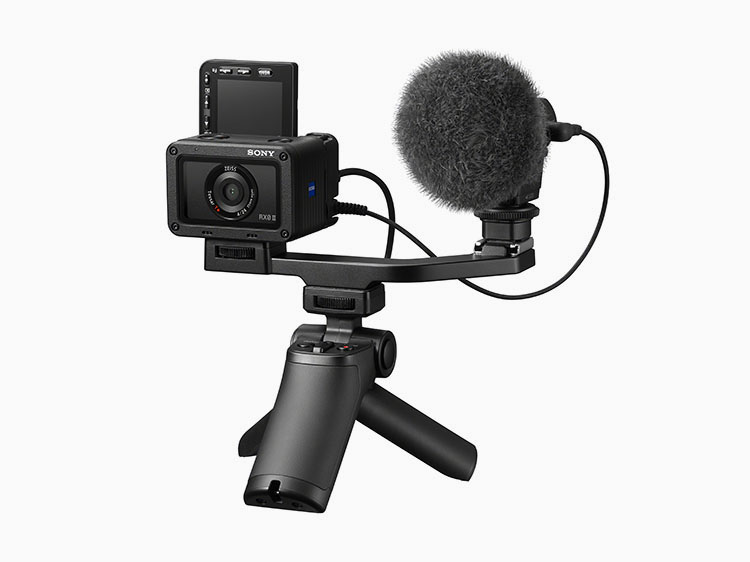 Upto 5 RX0 II camerascan be controlled wirelessly using Sony ‘Imaging Edge Mobile’ application and between 6 to 50 cameras will be able to be controlled via an access point (scheduled for Summer 2019.) The RX0 II is alsocompatible with the Camera Control Box CCB- WD1 which enables up to 100 cameras to be connected and controlled in a wired multi-camera setup. These multi-camera solutions unlock a whole new world of shooting opportunities and free video expression from any viewpoint that the user wishes to pursue. The RX0 II kit with the VCT-SGR1 Shooting Grip and bracket will ship in April, costs $700 USD, and will be sold at authorized retailers across North America.