Following the reveal of Ami One Concept in February 2019, Citroën is presenting its new 19_19 Concept, which expresses Citroën’s vision of ultra-comfort and extended mobility to escape from the cities.  19_19 Concept is a disruptive Citroën manifesto that rewrites the rulebook and illustrates a vision of mobility that is deliberately unconventional, futuristic looking and constraint-free. Boasting exceptional proportions for the automotive segment – and inspired by the worlds of aviation and interior design – 19_19 Concept is immediately recognizable through its pure and streamlined shapes, its skilfully worked technological details, and through the various ways in which it can be interpreted.

The cabin is suspended on a new suspension system with Progressive Hydraulic Cushions combined with smart active control. It features a unique layout influenced by the world of furniture with individual seats, each one expressing a different vision of comfort. 19_19 Concept is also innovative and futuristic through its autonomous driving technology. With the help of artificial intelligence, the concept car is equipped with a ‘Personal Assistant’ built into the dashboard that takes control of the vehicle during autonomous driving and interacts with passengers via an intuitive and proactive system that anticipates the needs of each occupant. 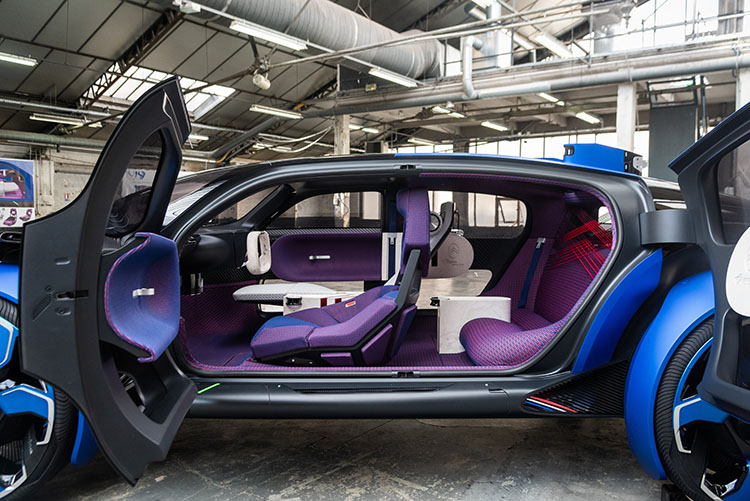 19_19 Concept reduces the carbon footprint of travel, heightens on-board comfort through the absence of noise and vibration, and proves that 100% electric drivetrains are suited to long journeys with a range of up to 497 miles (800km). Created to offer relaxed transportation, the concept car charges via induction technology where the infrastructure is in place, either when the car is moving or when it is stationary. 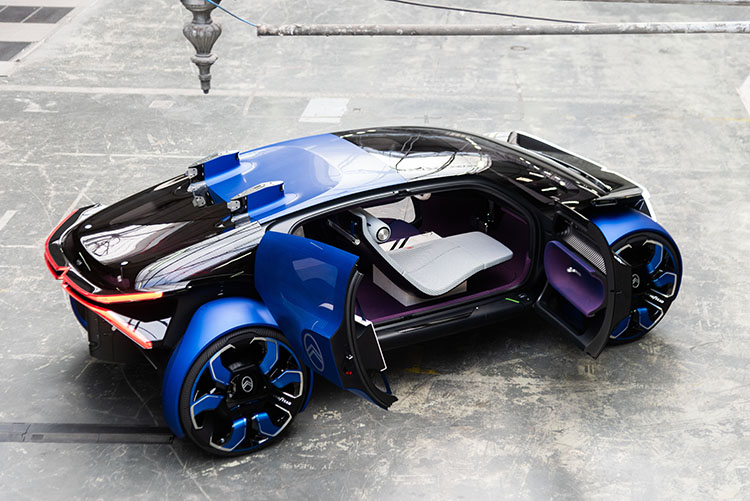 The side of the body features a black panel that blends into the front doors, which serves as a welcome interface for drivers approaching the vehicle. The car acts as a personal assistant, recognizing the driver, welcoming them and interacting with them through the black panel by displaying animated graphic messages, for example illustrating the locking and unlocking of the doors.

The glazed area at the front is grey-tinted so that passengers can see and be seen at mid-height. At the rear, blue micro-perforated trim safeguards the privacy of passengers, enabling them to see out whilst not being seen. The passenger experience in rows one and two are different, highlighted by two different colors – black at the front and blue at the rear. 19_19 Concept draws on the brand’s heritage with its vivid and deep ‘Rosalie Blue’ color, a nod to the record-breaking Petite Rosalie. The luminous and almost electric hue is anodized, unvarnished, technological and futuristic.

The wheels were designed and developed in partnership with Goodyear. The oversized 30-inch wheels, with a diameter of 930mm and fitted with 255/30 R 30 tyres, have an exceptional, revolutionary design. The wheel dimensions and designs are extraordinary – inspired by gear cogs – which feature at the heart of the Citroën logo. A wheel usually comprises a rim and a tyre, but the wheels on 19_19 Concept are hybrid. The Goodyear teams were set the challenge of creating seamless continuity between the rim and the tyre, plunging 19_19 Concept into a futuristic world beyond traditional automotive bounds and giving the impression of a vehicle moving forward on independent spheres.

In an additional hypnotic wheel design feature, the fixed-hub Citroën Origins logo remains horizontal even when the wheels are turning. This is another nod to the brand’s history, namely the famous swan that symbolized the floating engines integrated since the Rosalie models. The fixed-hub centenary logo strengthens the poised appearance of the vehicle. 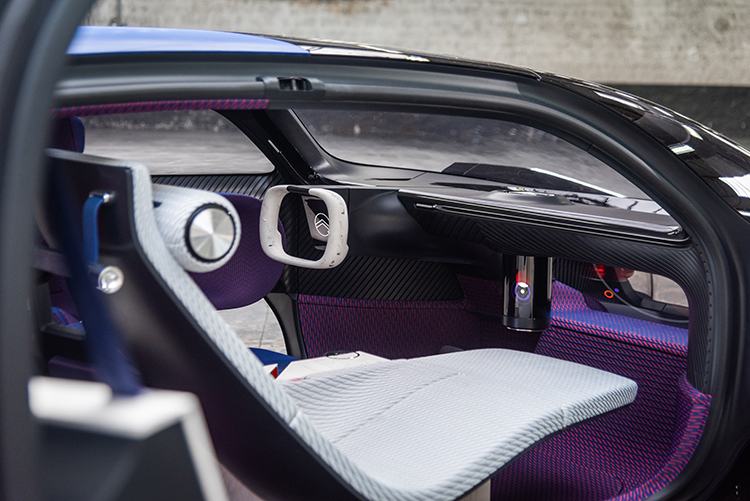 The dashboard on 19_19 Concept is pure and ultra-simplified, to showcase the steering wheel and the personal assistant function. The borderless glazed area under the dashboard can be transformed into a film projection screen for the pleasure and entertainment of the passengers. Smooth and flat, it faces the passengers and establishes continuity between the exterior and interior. It also features a fully transparent glazed area on its lower section so that there is a view of the exterior. The suspension and the road underneath the vehicle are both visible from the cabin, below the dashboard, giving occupants the impression of hovering over the road as in a helicopter. The crosswise cloth upholstery further heightens this impression as it features throughout the cabin, like a magic carpet. 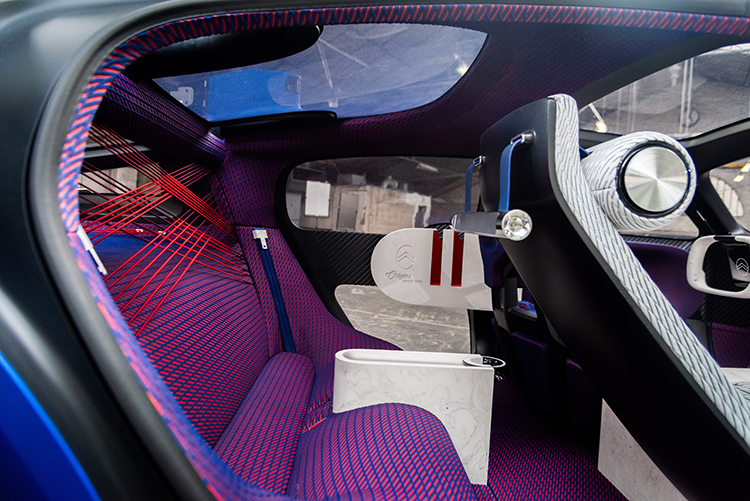 A true expression of the near future of the automobile, 19_19 Concept takes control in certain driving phases, including on motorways or in traffic jams. Drivers can let themselves be driven entirely by the vehicle in complete safety. The driver can take back control whenever they like, for example, to enjoy the at-the-wheel experience. They may be required to do so in certain more complex situations, such as in traffic through obstacle-filled city centers. 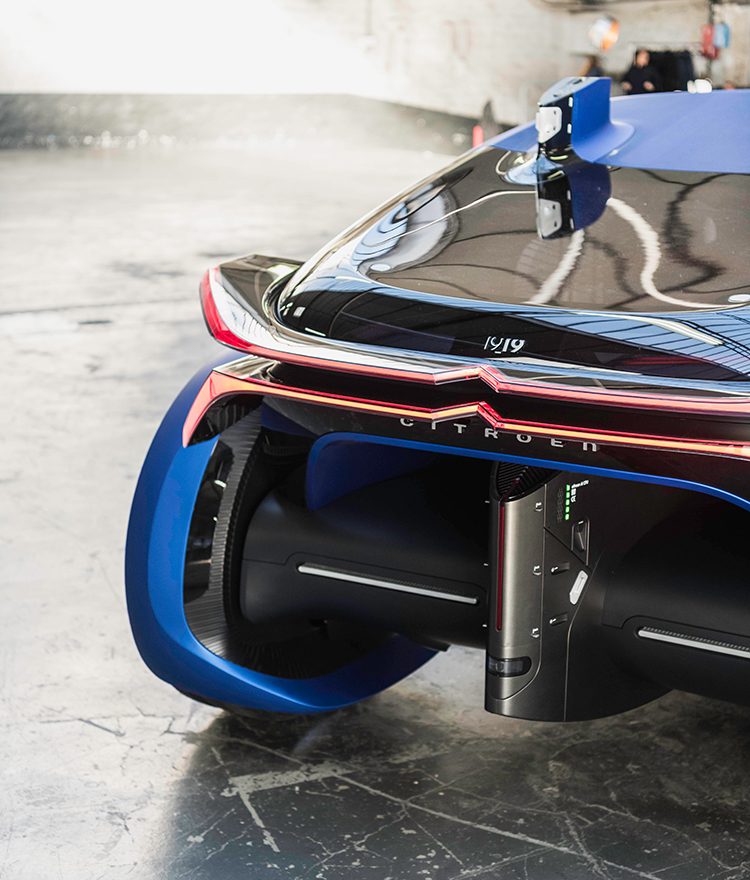 Futuristic yet realistic, 19_19 Concept is powered by an all-electric drivetrain fully consistent with Citroën’s strategy of energy transition. 19_19 is powerful, accelerating from 0 to 62mph (100km/h) in five seconds and reaching a top speed of 124mph (200km/h). Driven by 100kWh batteries, the 4WD drivetrain comprises two motors (one at the front, one at the rear) and develops torque of 800Nm and power of 340kW. The vehicle has a range of 497 miles (800km).