An extremely-rare 1939 Porsche Type 64 will soon be up for sale at RM Sotheby’s Monterey auction this Summer. Only three examples of the Type 64 were built between 1939 – 1940 for the Berlin-Rome endurance race, but due to World War II, were never fully realized.

A strive for technological advancement in motor car performance drove the motorsport industry in the 1920s and 1930s, resulting in some of the most iconic race cars of the period, which served as great sources of national pride. The advent of World War II saw Professor Ferdinand Porsche forced to shift focus to a car for the masses—the KdF-Wagen—however, he retained a vision to produce a lighter, faster version of the model that would showcase the nation’s technology and realize his sports car dreams. 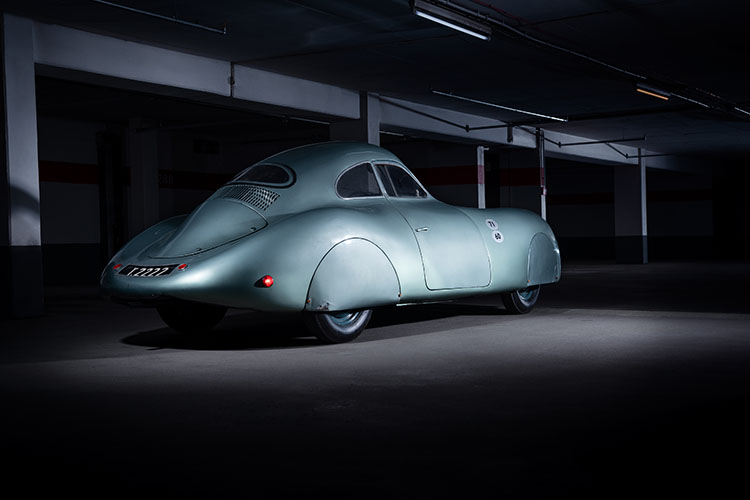 It was a road race that never took place that would give birth to the Type 64. The 1,500-kilometer Berlin-Rome race was set for September 1939 and would be used to promote Germany’s autobahn system as well as celebrate the launch of the KdF-Wagen production car. In preparation for the race, the government-owned Volkswagen commissioned three special long-distance racing versions of the KdF-Wagen, known internally to Porsche and his engineers as the Type 64. Designed by the same engineers who would go on to create the 356, the cars were built at Reutter Works across the street from Zuffenhausen over 1939-1940, with lightweight aluminum bodies and the wheels fully covered in removable alloy panels. 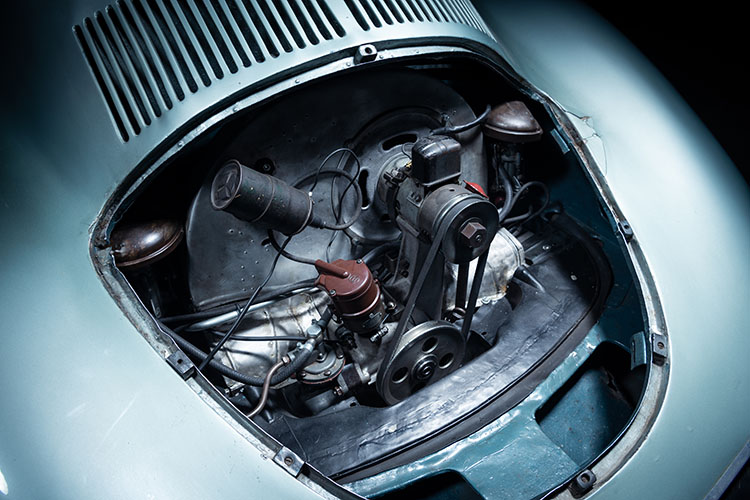 While the Type 64 shares the same drivetrain and suspension as the Type 1 Volkswagen, it is otherwise very different. The chassis and riveted alloy body utilize WWII aircraft technology, while the original air-cooled flat-four engine was tuned to 32 bhp. Just as the first of the three cars was finished, and weeks before the Berlin-Rome race was set to start, war was officially declared and government interest turned to military vehicles, with the first Type 64 becoming property of the German labor front. 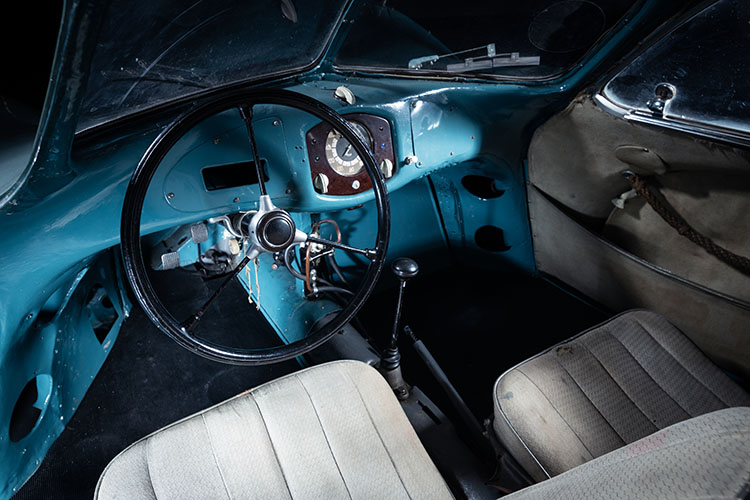 A young Ferry Porsche did not give up, and he moved forward with the two additional cars, which would serve as experimental test beds for Porsche as they developed their own production sports car, essentially making the Type 64 the missing link between Volkswagen and the Porsche 356. The second car was completed in December 1939 and the third, using the chassis of the first car, which had been damaged following an accident with the Managing Director of Volkswagen at the wheel, by June 1940. 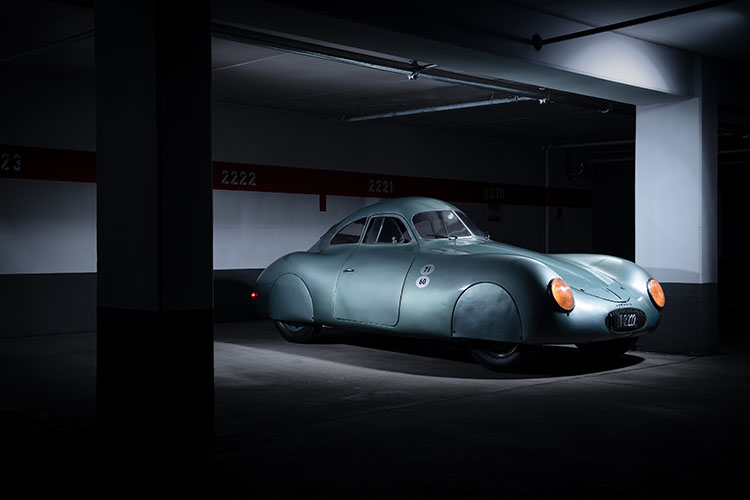 The third Type 64 was retained as a personal family car and driven extensively by Ferry and Ferdinand Porsche. When the company was forced to relocate headquarters to Gmünd, Austria from 1944-1948, it was kept alongside the second Type 64 at the family estate in the picturesque lakeside town of Zell-am-See. No. 3 was the only example to survive the war, and Ferry Porsche himself applied the raised letters spelling out “PORSCHE” on the nose of the car when he had in registered in Austria under the new company name in 1946. 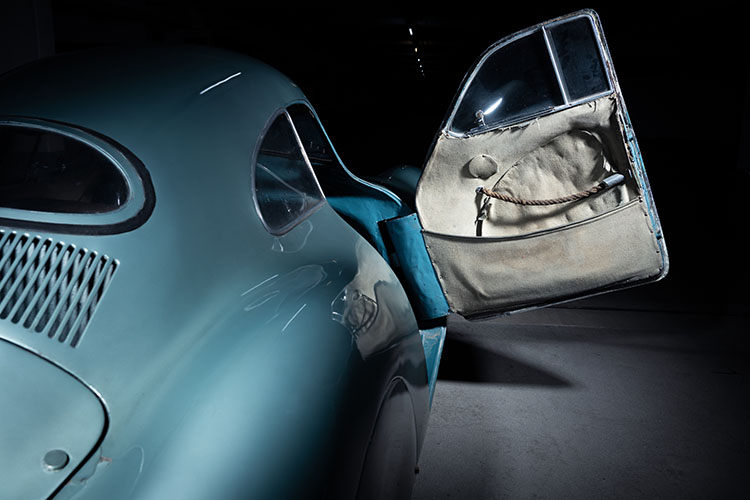 In 1947, restoration work was commissioned by Porsche and completed by a young Pinin Farina in Turin, Italy. Nearly one year later, Porsche demonstrated the Type 356 roadster, no. 1, on public roads in Innsbruck, with the Type 64 by its side. Austrian privateer driver Otto Mathé completed demo laps in the Type 64 and fell in love, buying it from Porsche the following year. He enjoyed a successful racing career with the car in the 1950s—the very first to do so in a Porsche product—and kept it for 46 years until his death in 1995.

In 1997, the Type 64 changed hands for just the second time in six decades and appeared at a handful of vintage racing events with its third owner, Dr. Thomas Gruber of Vienna, including Goodwood and the Austrian Ennstal Classic. Dr. Gruber is the author of the renowned Carrera RS book and one of the most respected Porsche specialists worldwide. 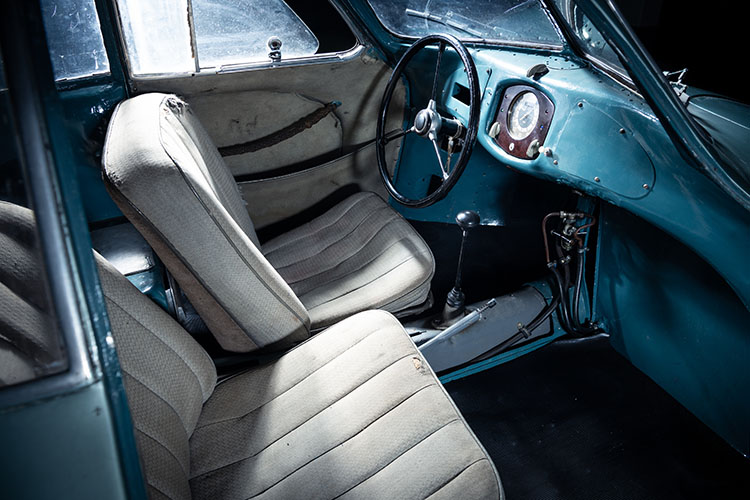 Delightfully patinated, the streamlined 1939 Porsche Type 64 is now offered in Monterey from the long-term care of just its fourth owner, who acquired the car more than a decade ago, and is accompanied by many original spare parts, as well as extensive period images and historic documentation. This is perhaps the most significant surviving piece of Porsche engineering and design history.