McLaren has revealed its unique interpretation of a modern Grand Tourer — a sleek, muscular vehicle designed for long distance, high-speed driving with room for luggage. Like all McLarens, the new GT has a carbon fiber structure that possesses exceptional strength and rigidity, while enabling unparalleled driving dynamics and lightest-in-class kerbweight. At 3,232lbs (DIN), the McLaren GT is more than 286lbs lighter than its closest core competitor and literally hundreds of pounds less than other cars in the segment. With 612bhp from its 4.0-liter, twin-turbocharged V8 engine, the power-to-weight ratio of the superlight new McLaren GT is a remarkable 399bhp-per-ton. 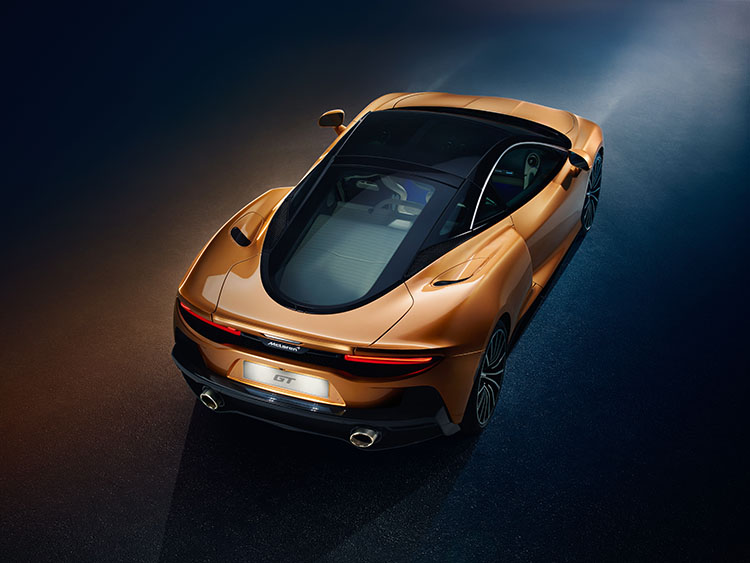 The bespoke MonoCell II-T monocoque – the T denoting ‘Touring’ – incorporates a carbon fiber rear upper structure that adds minimal weight but allows the creation of a 14.8 cubic feet luggage area below the front-hinged, full-length glazed tailgate. The tailgate has a soft-close function as standard and can be optioned as electrically powered. The low height of the engine and positioning of the exhaust system has allowed the volume, shape, and usability of the luggage bay to be optimized. A golf bag or two pairs of 185cm skis and boots, as well as luggage, can be carried with ease, while a further 5.3 cubic feet of storage at the front means the new McLaren GT can accommodate a total of 20.1 cubic feet. 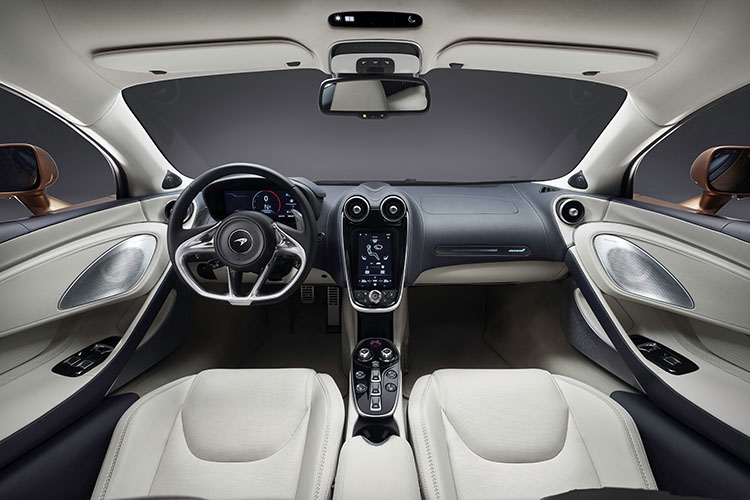 The interior is a cosseting space designed to delight on longer journeys, but with all the essentials for focused, high-performance driving; the seating position, location of controls and forward visibility are as important here as they are in any McLaren. The streamlined, electrically adjusted and heated seats, which are unique to the McLaren GT, have been engineered to meet the requirements of Grand Touring, being optimized for long-distance comfort, with the perfect amount of padding and shoulder and back support in combination with superb lateral control. 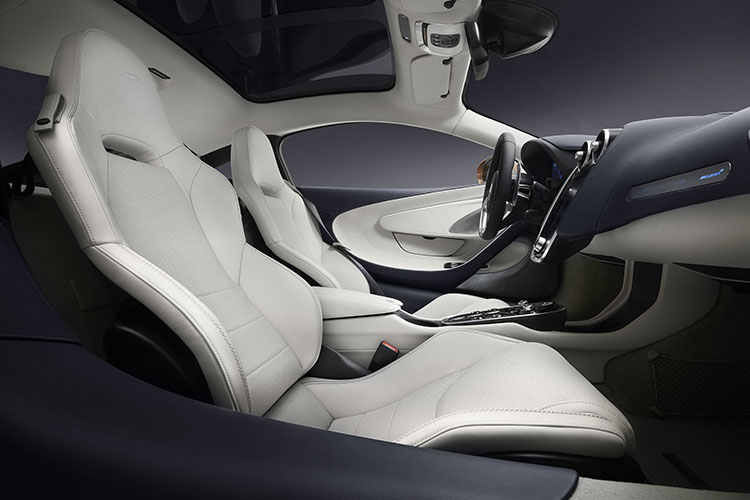 Technology and modern craftsmanship share equal prominence the new McLaren GT, with the finest high-quality materials complemented by features such as the most sophisticated McLaren infotainment system to date; hidden-until-lit ambient lighting and the option of an electrochromic glazed panel in lieu of the standard carbon fiber composite gloss black roof, darkening or lightening at the touch of a button. Machined and knurled aluminum switches and controls – including the steering wheel-mounted gearshift paddles – contrast with gloss black surrounds for the infotainment screen, window switches, gear-selection console, and air vent housings. A 12-speaker, Bowers & Wilkins premium audio system featuring carbon fiber sub-bass woofers and Kevlar mid-range drive units, is available. 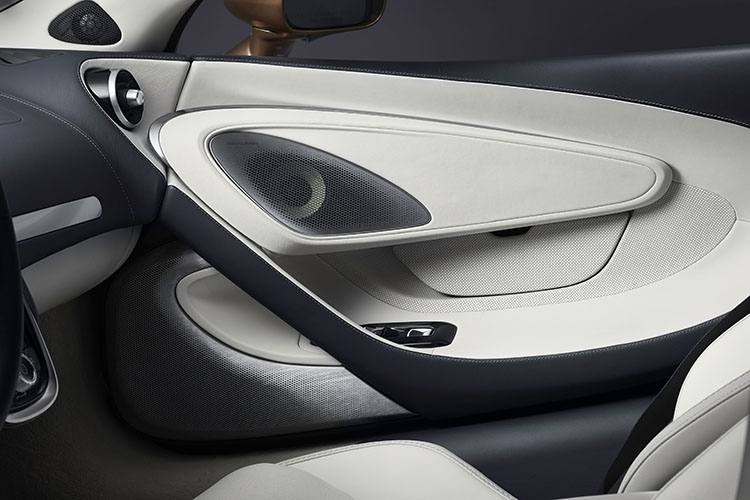 Creating a new type of McLaren – and the first true Grand Tourer from the brand – saw the McLaren design team embracing the visual history of Grand Touring cars while remaining true to the philosophies that underpin all McLaren design. The long, elegant exterior lines that are widely recognized as Grand Tourer design cues are executed in the new McLaren GT according to the aerodynamic principles that define every McLaren. The muscular rear fenders – another design trait commonplace in Grand Touring history – are an example of the form of every McLaren being true to its function, incorporating here the air intakes for the high-temperature radiators that cool the engine.

The width and stance of the new McLaren GT are emphasized at the front by the signature ‘hammerhead line’ that runs horizontally across the nose and draws the eye out to the sides of the vehicle. At the rear, an integrated fixed rear wing, large diffuser, and substantial exhaust tailpipes are reminders that this is a Grand Tourer with supercar performance. 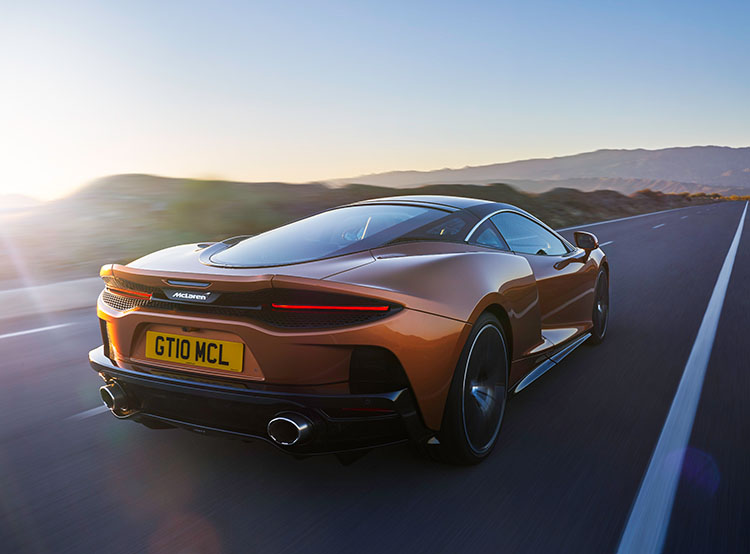 The source of that performance is a new, 612bhp PS 4.0-liter, twin-turbocharged engine, designated M840TE. Further expanding the family of McLaren V8 engines, it is bespoke to the new McLaren GT and has the immense power and torque and superior exhaust sound quality that are the hallmarks of a true Grand Tourer. The torque of 465lb ft is produced between 5,500rpm and 6,500rpm, with more than 95% of this available from 3,000rpm to 7,250rpm. The new engine is mated to a 7-speed SSG transmission to deliver linear, seamless and relentless acceleration.

The performance statistics speak for themselves: with a launch control function optimizing acceleration from a standing start, 0-60mph in 3.1 seconds, 0-124mph is dispatched in 9.0 seconds. The maximum speed of the McLaren GT is 203mph. The new McLaren GT is available to order now with a starting MSRP of $210,000 (USD) from McLaren retailers worldwide, with customer deliveries commencing towards the end of 2019.