‘The Most Famous Car in the World’ is heading to auction with RM Sotheby’s this Summer. One of three surviving examples of the iconic Aston Martin DB5 commissioned in period by EON Productions and fitted with MI6 Q Branch specifications, as showcased in 1964’s Goldfinger, will be sold during 2019 Monterey auction on 15 August.

Two near-identical cars were built and loaned to Eon Productions for filming, with each fulfilling various roles; one for stunt driving and chase sequences and therefore needing to be lightweight and fast, and the other for interior shots and close-ups, to be equipped with functional modifications created by Stears.

As Desmond Llewelyn’s legendary weapons-master Q would go on to explain to Sean Connery’s 007, the Snow Shadow Gray-painted DB5 was equipped with front and rear hydraulic over-rider rams on the bumpers, a Browning .30 caliber machine gun in each fender, wheel-hub mounted tire-slashers, a raising rear bullet-proof screen, an in-dash radar tracking scope, oil, caltrop and smoke screen dispensers, revolving license plates, and a passenger-seat ejection system. Although never used during the film, the car was also equipped with a telephone in the driver’s door to communicate with MI6 headquarters and a hidden compartment under the driver’s seat containing several weapons. 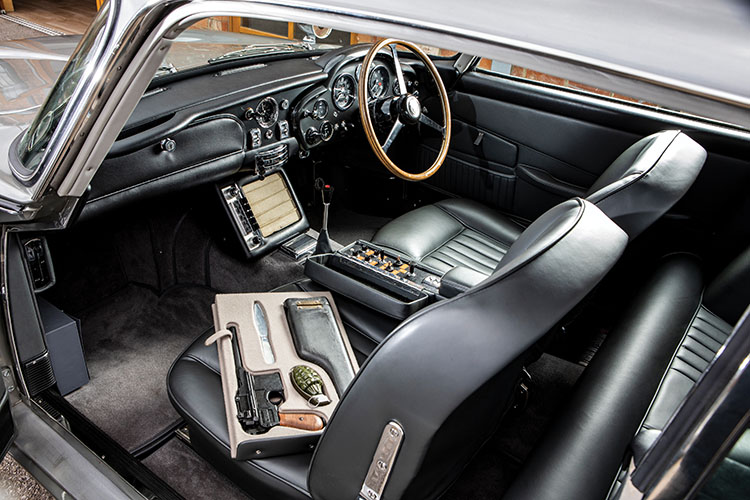 The smash success of Goldfinger was also a success for Aston Martin, which saw DB5 sales surge to fuel an unprecedented level of production. The producers at Eon also took notice of the enormous appeal and potential marketing opportunities. In preparation for Thunderball’s release, the company ordered two more DB5 saloons, receiving chassis nos. DB5/2008/R, the example on offer at RM Sotheby’s Monterey sale, and DB5/2017/R. The two cars were fitted with all of Stears’ Goldfinger modifications and were shipped to the United States for promotional duties for Thunderball. 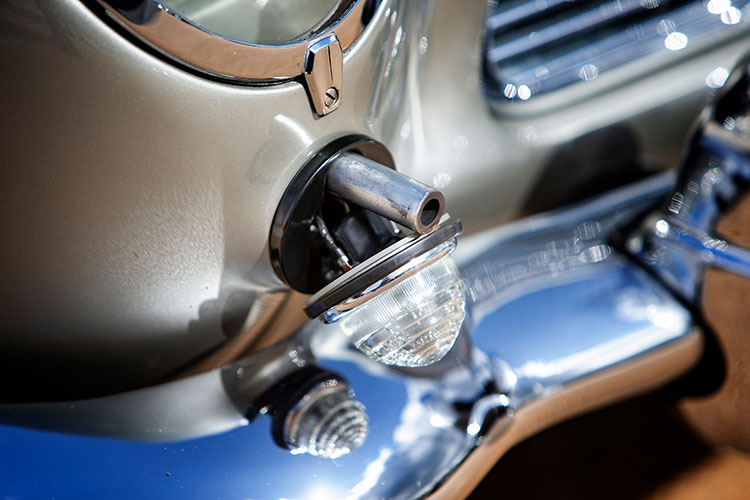 Reached through his son, Stephane Connery ahead of the sale, legendary actor Sean Connery, who originally portrayed James Bond on film in both Goldfinger and Thunderball said: “These DB5s are amazing – I remember the Furka Pass tire shredding as well as the promotional events with these cars – they have become increasingly iconic since Goldfinger and Thunderball, in fact I bought a very fine DB5 myself relatively recently.” 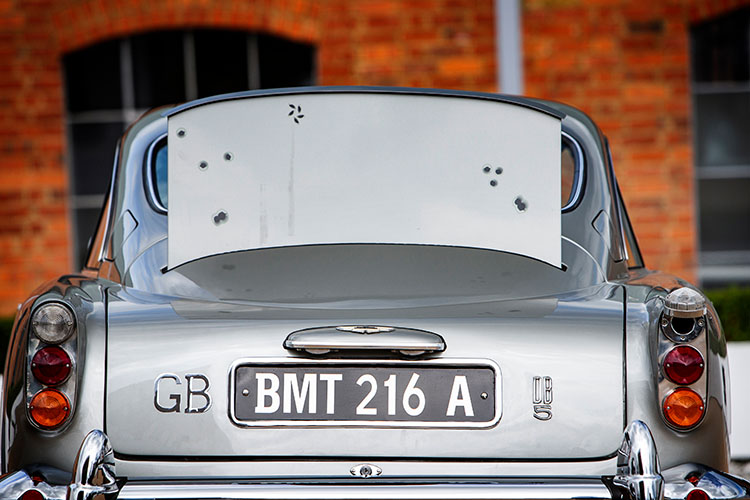 Following the tour, the two cars were no longer required as the next two Bond films debuted with different, more current automobiles in the hero roles and, accordingly, they were quietly offered for sale in 1969. The cars were soon purchased as a pair by well-known collector Anthony (now Lord) Bamford, whose British registration for chassis no. 2008/R remains on file. The Aston Martin build record lists Eon Productions as the original purchaser, with the important designation of being a “(Bond Car)” noted. 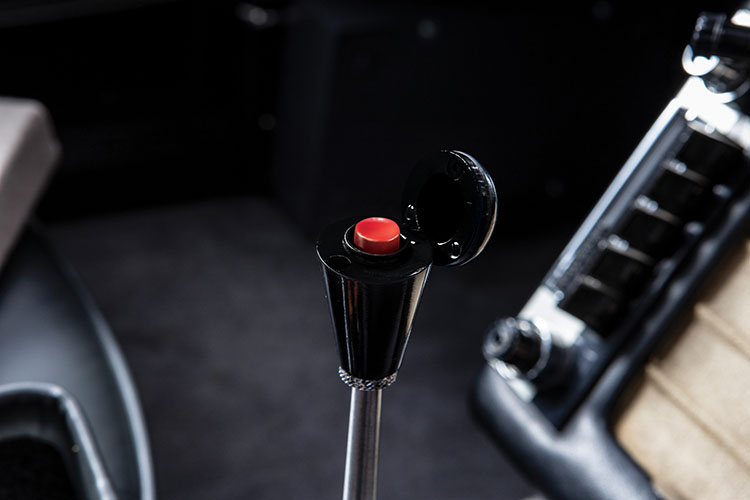 Bamford then sold DB5/2008/R to B.H. Atchley, the owner of the Smokey Mountain Car Museum in Pigeon Forge, Tennessee. The Aston Martin was featured as the museum’s centerpiece, remaining in a pristine state of display for 35 years, receiving regular start-ups for exercise. In 2006, RM Sotheby’s (previously RM Auctions) was privileged to offer this very Bond DB5 for public sale, in a largely unrestored state. 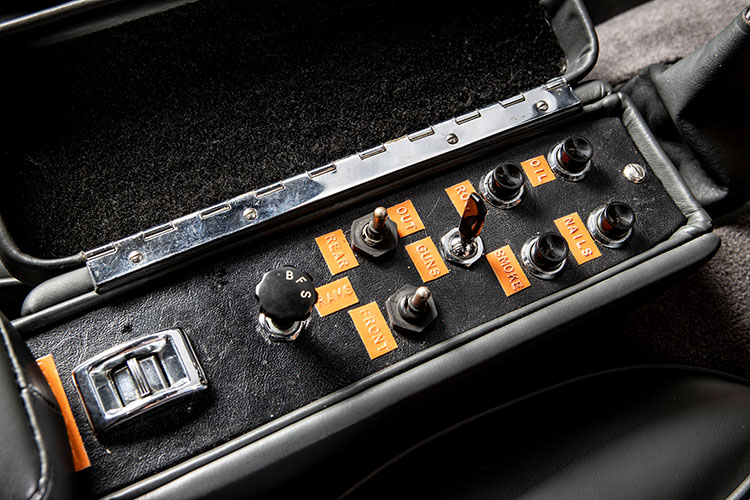 Since that time, a well-documented, no-expense-spared restoration by Switzerland’s esteemed Roos Engineering was completed. Roos Engineering is one of 13 specialist facilities whom Aston Martin have appointed as official Heritage Specialists. Not only were the chassis and body completely refinished to proper standards, but all thirteen of the John Stears-designed Bond modifications were properly refurbished to function as originally built. 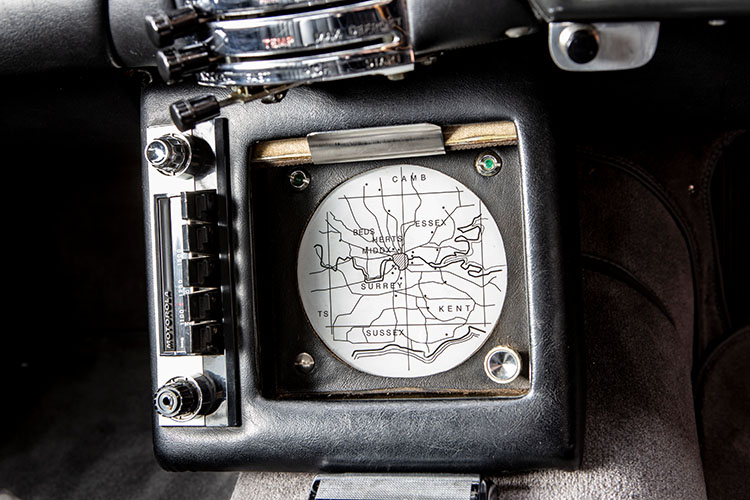 The first Stears-modified car has been lost since 1997, narrowing the number of surviving examples to just three. The car on offer is one of only two built from new with all Bond gadgetry, and chassis no. 2008/R stands apart with its extremely minimal chain of ownership, having had just three private owners over 50 years, including a 35-year period of museum exhibition. An incredibly rare and exciting example of what has been deemed “the most famous car in the world”, the DB5 offers a highly desirable acquisition for the serious marque collector…or secret agent (Est. $4,000,000 – $6,000,000). 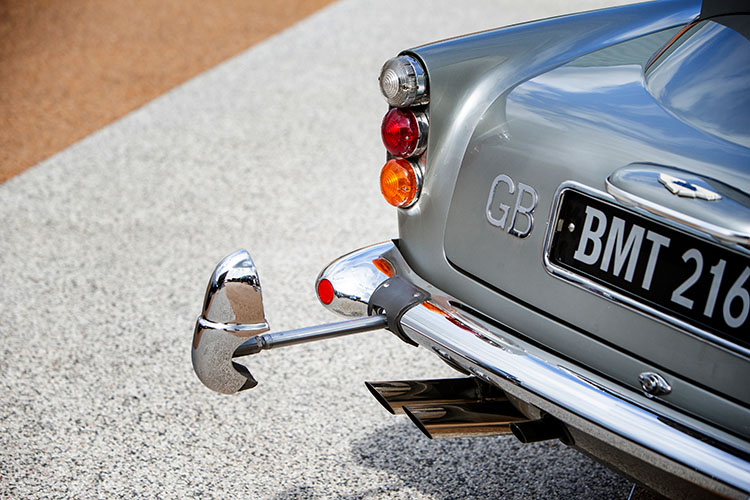 RM Sotheby’s will display the Bond DB5 in North America this summer, with July dates to be announced. The car leads ‘An Evening with Aston Martin’, a special third auction evening on 15 August during RM Sotheby’s flagship Monterey sale, featuring more than 30 of the world’s most sought-after road-going and track-ready Aston Martin sports cars from across the marque’s illustrious history. This year’s Monterey sale (15-17 August) will once again present more than 120 of the world’s most important motor cars in the ultimate collector car destination.