In the future, drivers will be able to choose whether they wish to be driven or do the driving themselves. With the BMW Vision M NEXT, the BMW Group is revealing its take on how driving pleasure might look in the future for those who enjoy taking the wheel themselves. It offers a foretaste of the BMW M brand’s electrified future by placing the focus squarely on the actively engaged driver. Intelligent technologies on board provide comprehensive yet carefully targeted assistance to turn them into the ultimate driver.

The emotion-stirring exterior design clearly announces the BMW Vision Vehicle’s performance potential, borrowing styling cues from both classic and contemporary BMW sports cars in the process. The BMW Vision M NEXT draws its inspiration from the iconic BMW Turbo and groundbreaking BMW i8 plug-in hybrid and adopts a future-focused interpretation of design elements such as the low-slung, wedge-shaped silhouette, gullwing doors and striking color scheme. 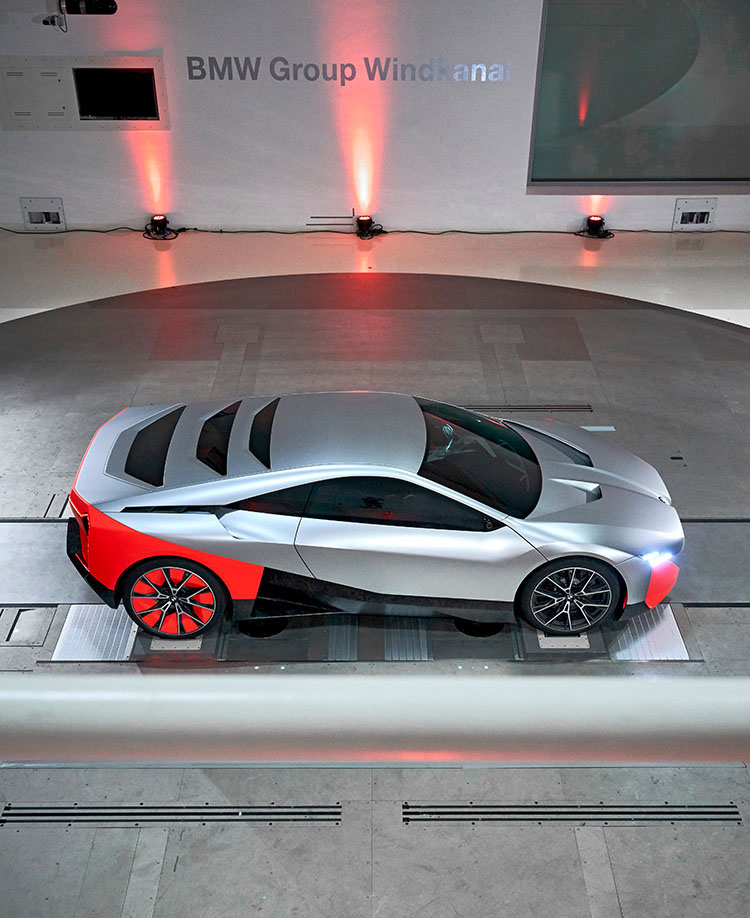 The unmistakable sports-car proportions are composed of surfaces characterized by clarity and pared-down styling. The front and rear ends are finished in the matt-neon shade Thrilling Orange, producing a vivid contrast against the exterior’s otherwise silk-matt Cast Silver metallic paintwork. This use of color blocking gives the Vision Vehicle an added air of modernity and emphasizes its inherent dynamism. 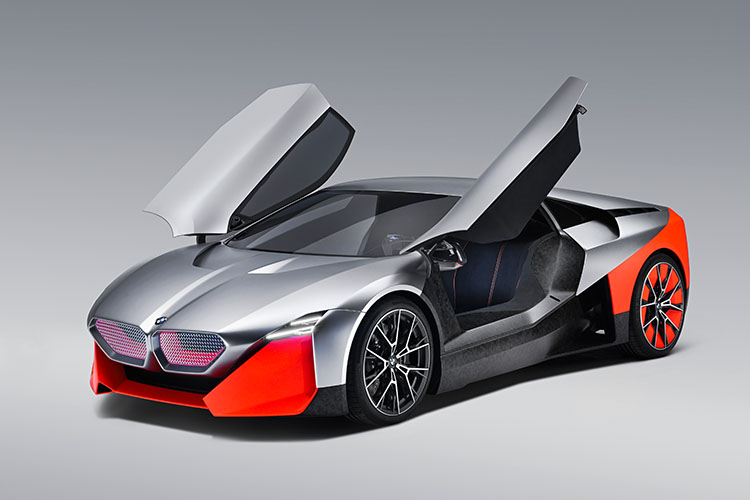 The actual driving experience in the BMW Vision M NEXT is every bit as captivating as its exterior looks. The Power PHEV drive system in offers the choice between electric all-wheel drive and pure rear-wheel drive, with either all-electric propulsion or the power of a turbocharged four-cylinder petrol engine. System output of 441 kW (600 hp) produces a top speed of 300 km/h (186 mph) and enables the BMW Vision M NEXT to sprint from 0 to 100 km/h (62 mph) in just three seconds. 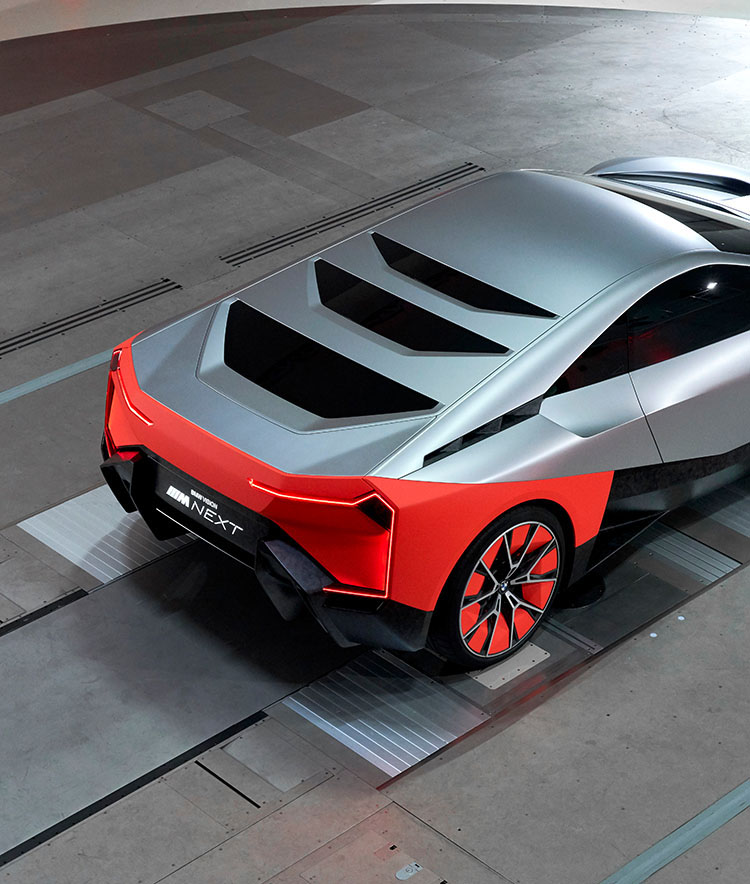 There is also a BOOST+ mode that puts extra power on tap at the push of a button. The maximum range when driving in all-electric mode is 100 km (62 miles) – more than enough to complete the majority of journeys purely on electric power. This means the BMW Vision M NEXT is a sports car that would also be suitable for use in city centres where zero-emissions zones may come into force in the future. 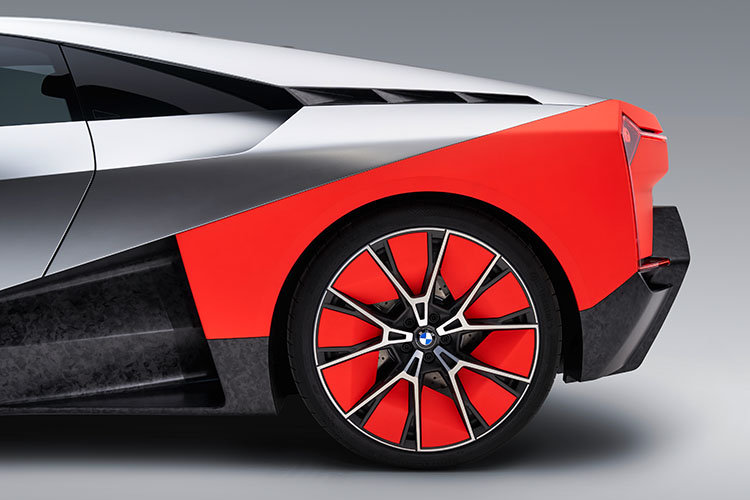 The expressive front-end design serves up a confident and modern interpretation of classic BMW icons. The signature BMW kidney grille is flanked on either side by triangular elements in Thrilling Orange, which serve to accentuate the air intakes at the sides and the integral headlights. These elements combine with the blade-shaped air intake below the kidney grille to create a cutting-edge racing aesthetic.

The soft outer curves of the kidney grille openings are reminiscent of a turbine’s air intake and give the front end added dynamic impact, while the color gradient used for the inside of the two kidney elements creates a sense of depth. The grille openings are each blanked off by a transparent layer with a laser-etched, illuminated pattern that seems to be floating inside – a highly sophisticated touch that gives added emphasis to this section of the car. 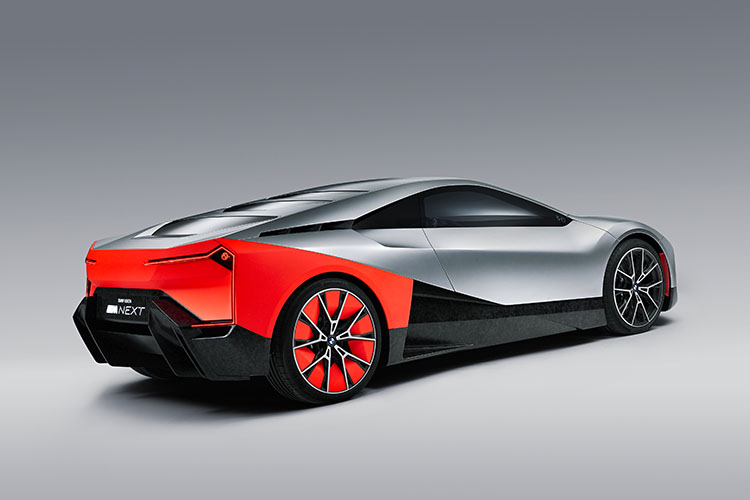 The BMW Vision M NEXT headlights are positioned on the outer edges of the front end, higher up than the kidney grille. Arranged one above the other rather than side by side, their constituent elements represent a highly distinctive interpretation of BMW’s classic four-eyed front end. The headlights hand a debut to Laser Wire lighting technology, whereby glass fibers coated with phosphorous are used to produce headlight elements with a new, super-slim and extremely precise form. All of which further underscores the Vision Vehicle’s future-focused character. 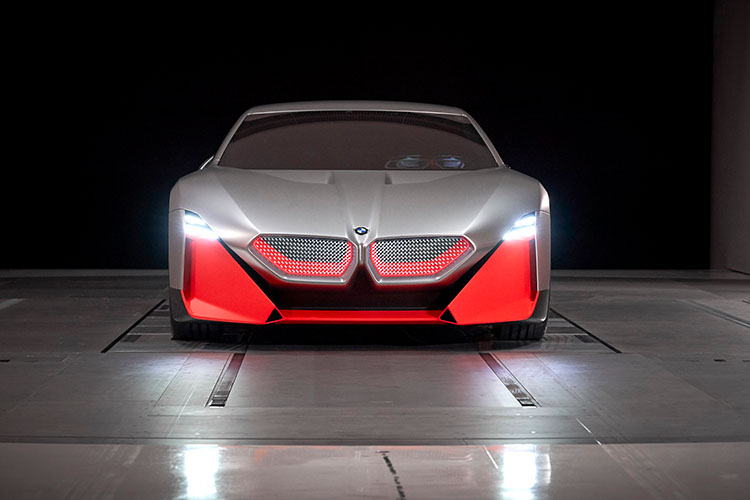 The low-slung, wedge-shaped sports-car silhouette of the BMW Vision M NEXT, the reward climb of its flank lines and the diagonal splash of contrasting orange color endow it with dramatic forward-surging intent, even when standing still. The black side skirts made from recycled carbon fiber make the car look even lower on the road. The sports-car silhouette frames a small number of crisp lines running along the clearly sculpted surfaces. 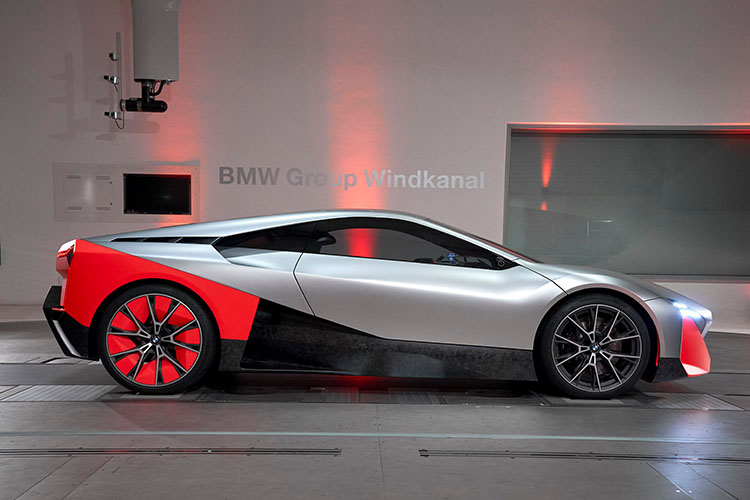 The lines of the powerfully contoured shoulders are also used to create the effect of the iconic Hofmeister kink, instead of incorporating it into the window graphic in the usual BMW fashion. The design is broken up by a gill-like aperture that narrows as it sweeps back from the window surface towards the tail, giving the car a more elongated appearance. A second look reveals another highlight in the form of the Air Flow. This opening located just in front of the rear wheels is designed to carefully channel the onrushing air towards the rear end in a way that further improves aerodynamics. 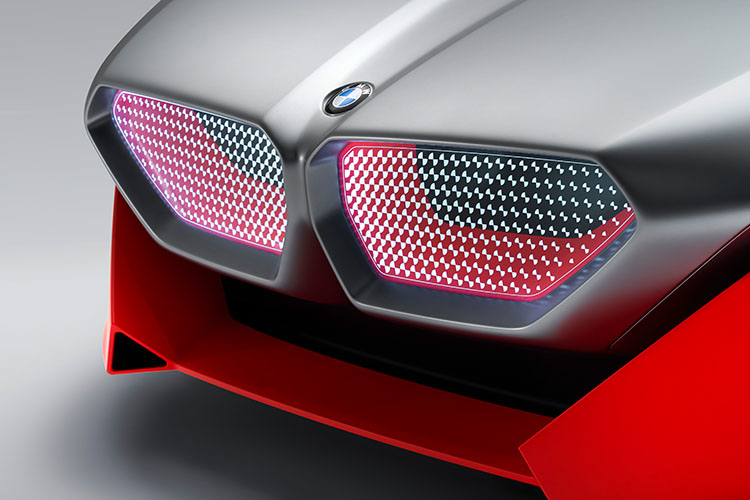 Precisely engineered gaps in the wheels’ intricate, three-dimensional multi-spoke design result in low weight, maximum rigidity and reduced drag and so optimize the transfer of power to the road. The spokes’ open, three-dimensional architecture maximizes cooling of the large brake discs at the front, while inserts optimize aero efficiency at the rear. The rear wheels on the BMW Vision M NEXT measure 22 inches in diameter, making them one inch larger than the front wheels (21 inches) and further emphasizing the car’s wedge-shaped appearance. 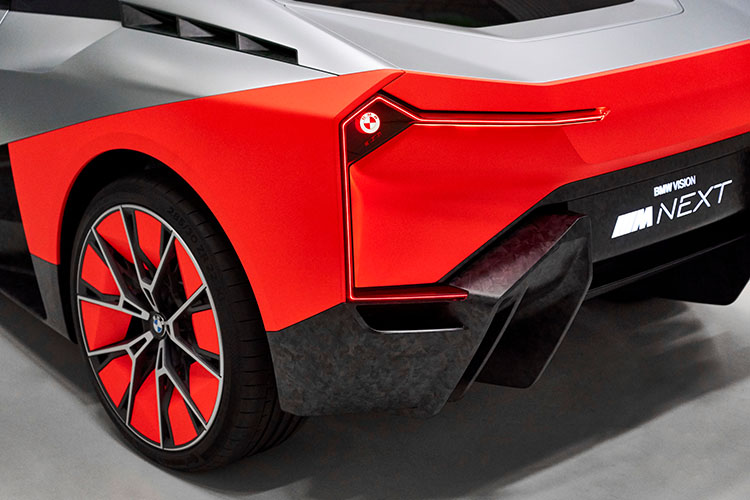 The broad, low-slung rear end makes a stylistic statement with its distinctly sporty tone. Its color scheme divides the car’s sculptural tail into two sections. The top section in Thrilling Orange creates a visual link between the colored areas of the flanks, further adding to the impression of width. The area below it is made from recycled carbon fiber and incorporates an aerodynamically optimized diffuser. The design of the rear window takes its cue from the BMW M1. The three-piece louvers are made from glass and emphasize the horizontal focus of the rear-end styling. 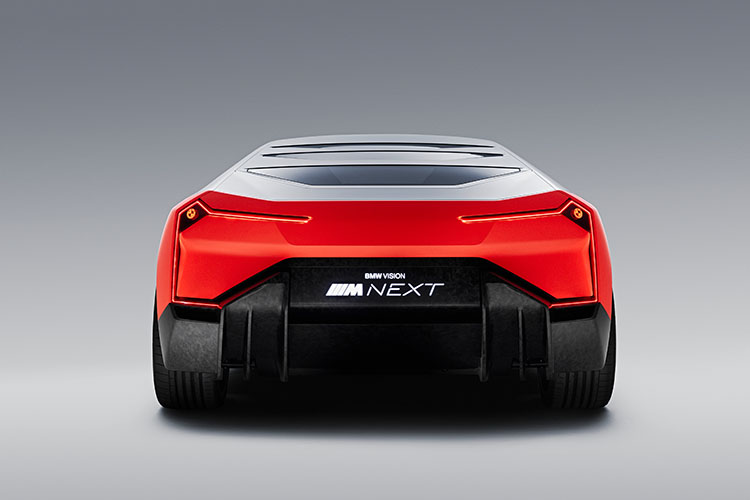 The rear lights feature the same Laser Wire technology used for the headlights. Their glass lenses frame the rear end in a sweeping flourish on either side, bringing its width and sporting presence to the fore. Inside each light unit, a single wafer-thin glass fiber produces an abstract ECG trace of a heartbeat fashioned with pin-sharp precision. The two-dimensional reinterpretation of the distinctive pair of BMW roundels from the BMW Turbo and BMW M1 – a gift to BMW aficionados – gives them the impression of floating in the rear lights’ transparent lenses. 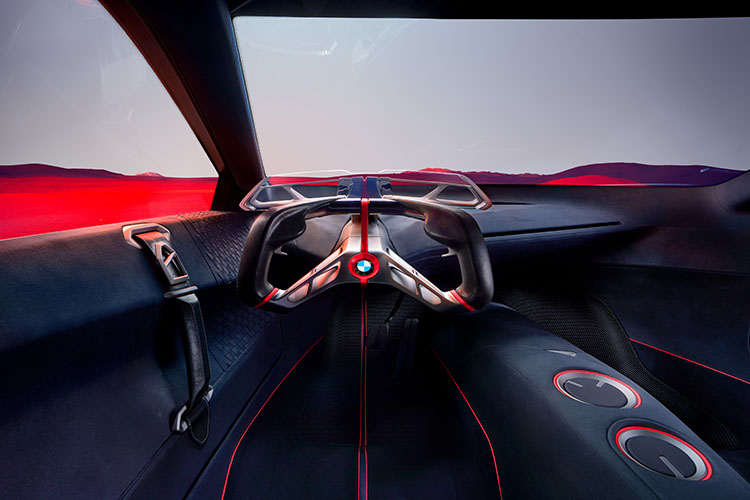 Facial recognition technology allows the car to unlock automatically as the driver approaches. Pressing the touch sensor on the gullwing doors prompts them to swing open, revealing a cabin that merges the driver and vehicle into one. The classy, minimalist interior revolves entirely around the actively engaged driver, both stylistically and technologically. The interior appears as if cut from a single mould, with functional elements such as the air vents integrated almost out of sight. Its geometry is deliberately restrained in nature so the driver can devote their attention entirely to the driving experience. The seat shells form part of a seat sculpture with a flowing design. They are upholstered in a foam material with shape memory properties that moulds itself to, cushions and supports the body to optimum effect. The head restraints seem to hover above both seat shells, increasing the sense of lightness. The extremely comfortable seating position immerses the driver in the driving experience. 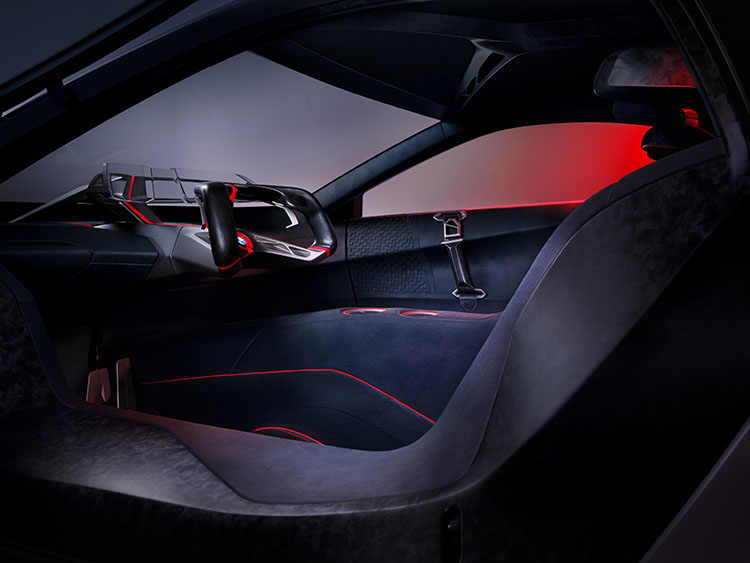 Taking pride of place in the interior, the BOOST Pod forms the interface between driver and vehicle. It brings together all the control options and information across three distinct visual tiers in the driver’s direct field of view. The first plane is formed by the horizontally arranged steering wheel featuring two small displays. Following this in the driver’s line of sight is a Curved Glass Display, a new addition whose transparent surface stretches around the steering wheel like a visor. The full-surface Augmented Reality Head-Up Display in the windscreen constitutes the third plane. Everything therefore happens directly in the driver’s line of sight. The driving settings can be modified on the steering wheel, while information such as revs, road speed, energy management, the driver’s heart rate and availability of BOOST+ mode is spread among a total of five clusters in the Curved Glass Display behind. BOOST+ mode can be engaged at the touch of a button to release extra power. The car alerts the driver when the ideal moment arrives to activate BOOST+.