Ferrari has unveiled the F8 Spider, the new generation drop-top sports car equipped with the most successful mid-rear-mounted V8 in history. The Ferrari F8 Spider was designed in parallel with the F8 Tributo berlinetta and features the Prancing Horse’s compact and efficient RHT (Retractable Hard Top) which influences the lines of a model that leads its category.

The F8 Spider is the latest addition to an exclusive and prestigious bloodline of open- top V8 cars begun with the 308 GTS in 1977. It is less extreme than the 488 Pista Spider, but sportier than the 488 Spider which it replaces in the range.

Consequently, the F8 Spider sets a new benchmark for the “en plein air” sports car in terms of usable performance and exceptional handling, providing an incredibly rewarding driving experience. In fact, it excels in merging handling dynamics with surprising in-car comfort. This Ferrari spider thus combines the characteristics of the most lauded 8-cylinder engine in history with unparalleled driving pleasure. 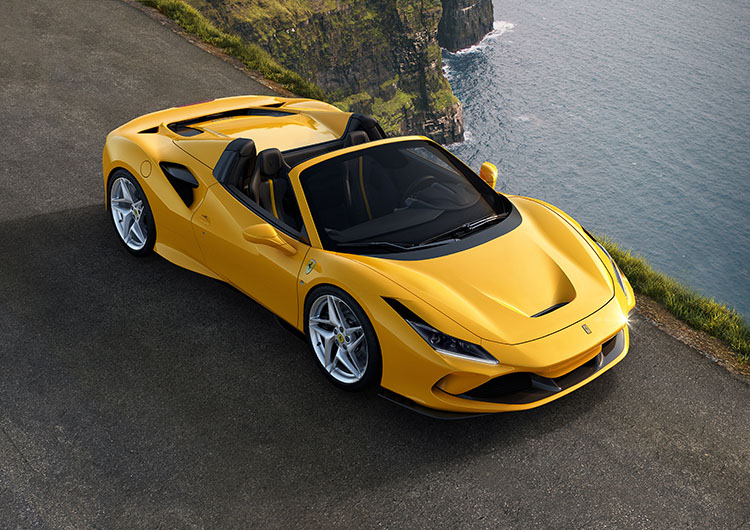 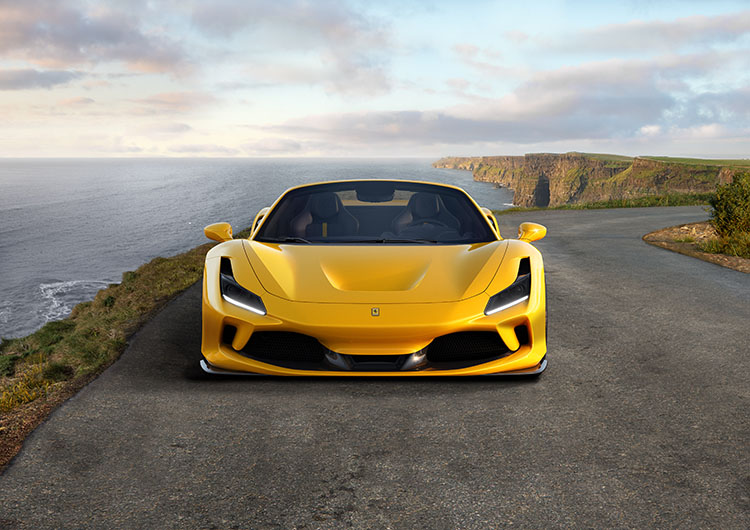 The key to the whole design was the shifting of the separation line between the car’s body and the roof from its conventional position at the belt-line (occupant shoulder level) to above the B-pillar. The top itself is thus more compact and two-dimensional, with the result that it can be divided into two parts and stowed on top of the engine. The RHT takes just 14 seconds to deploy or retract and can be closed or opened while the car is on the move up to 27 mph. 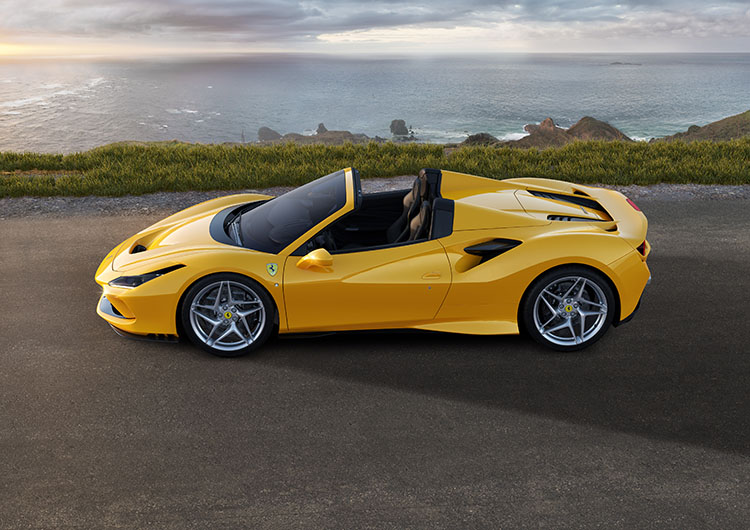 The front view of the car is characterised by the S-Duct around which the entire front end has been redesigned to highlight the extensive aerodynamic modifications made to this area of the car. The clearest example is new, more compact, horizontal LED headlights.

The rear spoiler has been entirely redesigned. It is now larger and wraps around the tail lights, visually lowering the car’s centre of gravity and allowing a return to the classic twin light cluster and body-coloured tail, another styling cue from the early 8-cylinder berlinettas like the very first in the legendary series, the 308 GTB. 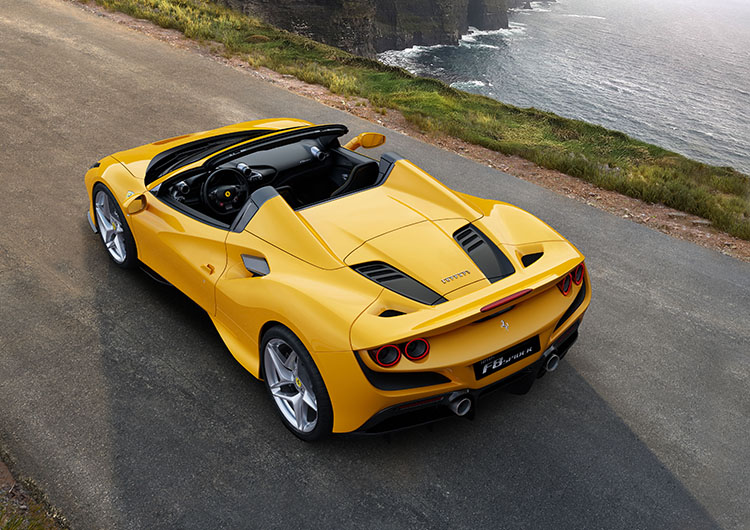 The treatment of the engine cover is one of the F8 Spider’s most distinctive characteristics. The manta-like look of the cover is created by a central spine that starts from the rear screen and disappears under the wing of the blown spoiler, following the air flows themselves.

The two wings that emerge from the central volume meld harmoniously with the bodywork, lending a sense of visual continuity from all angles. These wing elements are suspended creating an air vent below them which helps improve dissipation of the heat coming off the engine. The three sculpted strakes on the side elements of the engine cover also make their own contribution to this, in addition to referencing the iconic styling of the rear screen of the coupé version. The strakes are finished in black to reduce weight low and to lend a sense of visual clarity to the design. 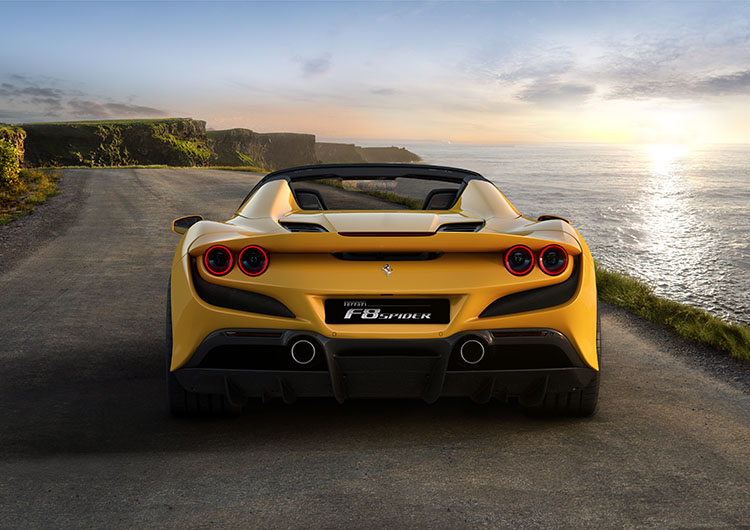 The crests that emerge from the prominent volumes of the tonneau cover fins flow sinuously rearwards and into the spoiler in an interpretation of the F1 “swan neck” (the pillars supporting the rear wings) which, in turn, enhances the already-powerfully sporty personality of the car.

The F8 Spider’s cockpit retains the classic, driver-oriented look typical of Ferrari’s mid- rear-engined berlinettas. A concept that creates a symbiotic relationship between driver and car, very much as happens in F1, with all controls mounted on the new generation steering wheel. The sporty seats are also new. 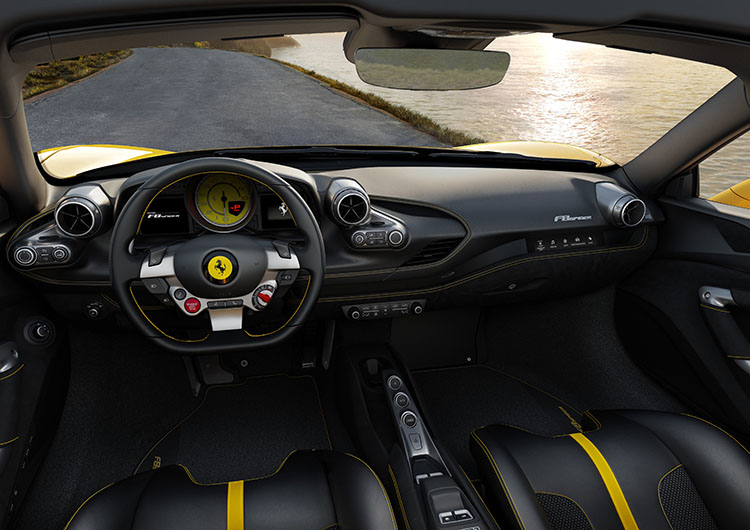 The dash incorporates an aluminium sail panel supporting the central satellite and continuing into the dash itself. Also to create a sense of visual lightness, a sliver of carbon fibre divides the upper and lower parts, streamlining the whole look. This section also incorporates the optional 7” touchscreen passenger-side display and the dash is completed by the classic instrument cluster with its central rev-counter. 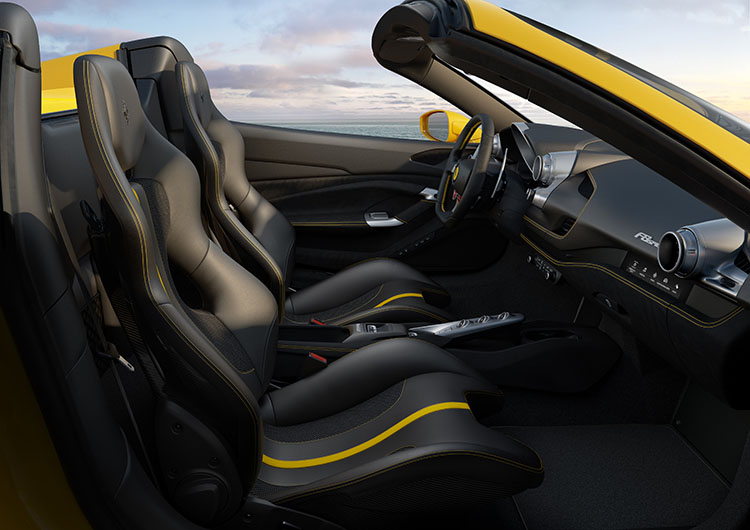 The tunnel is clearly separated from the dash and set beneath it, once again to enhance the sensation of lightness that the car’s interior exudes. It features a new bridge, a prominent sculptural creation that seems to float and thus further streamlines the cabin.

Pricing and availability have not yet been announced for the 2020 F8 Spider. We expect price further announcements closer to the model’s showroom arrival next year.