Back in 2019, Audi debuted the Q4 e-tron SUV, and now the German automaker has unveiled a concept of its Q4 Sportback e-tron which is scheduled to officially release in 2021. This gives potential Q4 customers the opportunity to start thinking about which version they prefer roughly a year before the first vehicles will be delivered: the versatility and robustness of the classic SUV or the dynamic elegance of the Coupé variant.

The two concept cars, which are already offering a clear look ahead at the top-of-the-range engine line-up of the coming series production model, also have the same drive technology. Two electric motors mobilize 225 kW of system output in the Q4 and Q4 Sportback e-tron concept. As is typical for Audi, the driving power is brought to the road with quattro all-wheel drive. Thanks to excellent traction, both versions of the Q4 accelerate from zero to 100 km/h (62.1 mph) in just 6.3 seconds. Top speed is restricted to 180 km/h (111.8 mph).

A large battery with a capacity of 82 kilowatt hours takes up almost the entire space in the underbody area between the axles. The range of over 450 kilometers (279.6 mi) sets the benchmark in its class. Versions with rear-wheel drive will offer a range of over 500 kilometers (310.7 mi) in accordance with WLTP. 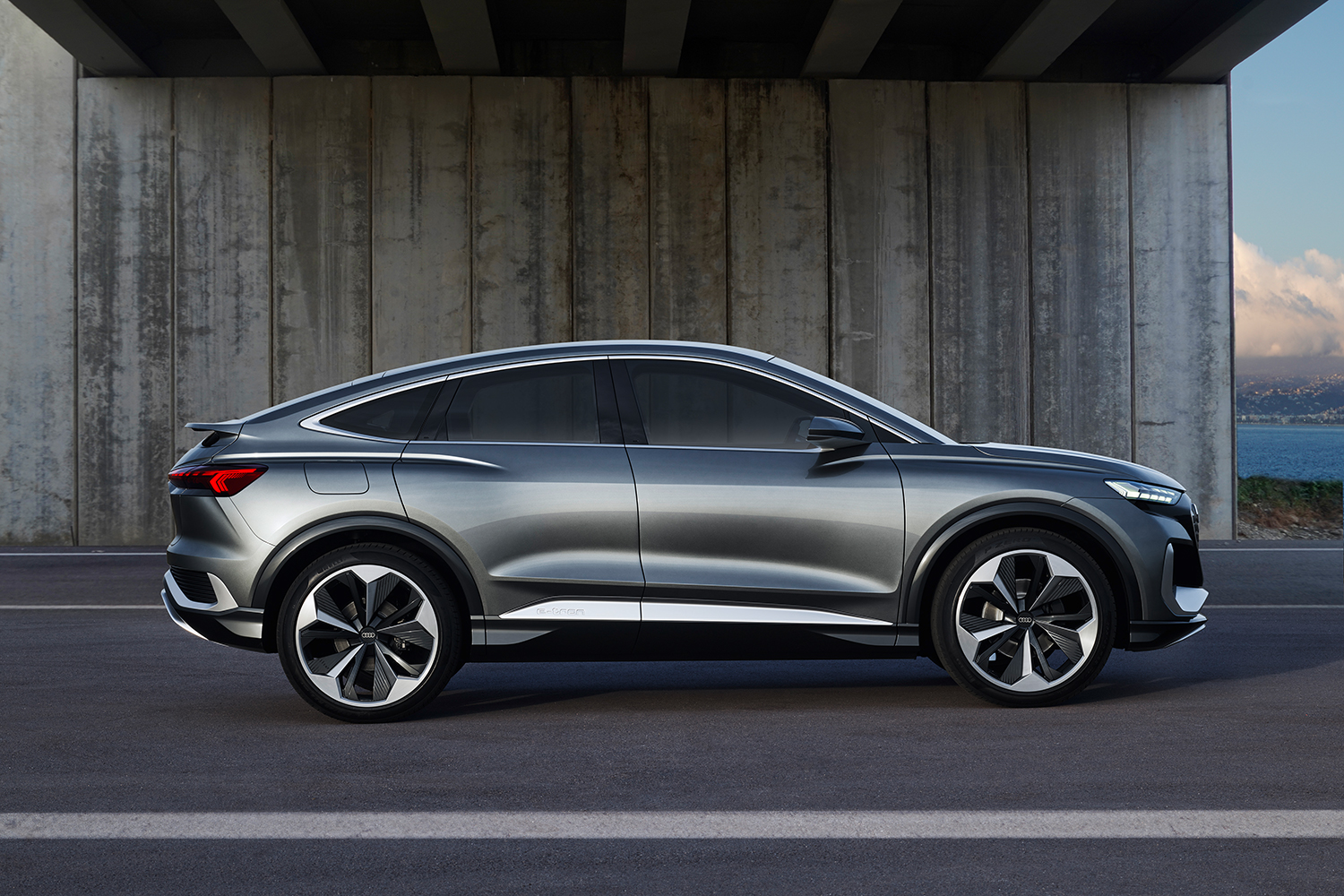 The silhouette of the Sportback slopes downward to the back in a subtle and dynamic curve. The roof line transitions into the significantly inclined D-pillars and ends in a horizontal spoiler at the level of the lower window edge. As a result, the future Audi Q4 Sportback appears much longer than its sister model, the Q4 e-tron concept.

With no transmission tunnel restricting the space, the interior of the Q4 Sportback e-tron concept offers unsuspected spaciousness and comfort, especially in terms of legroom at the front and even more in the rear. 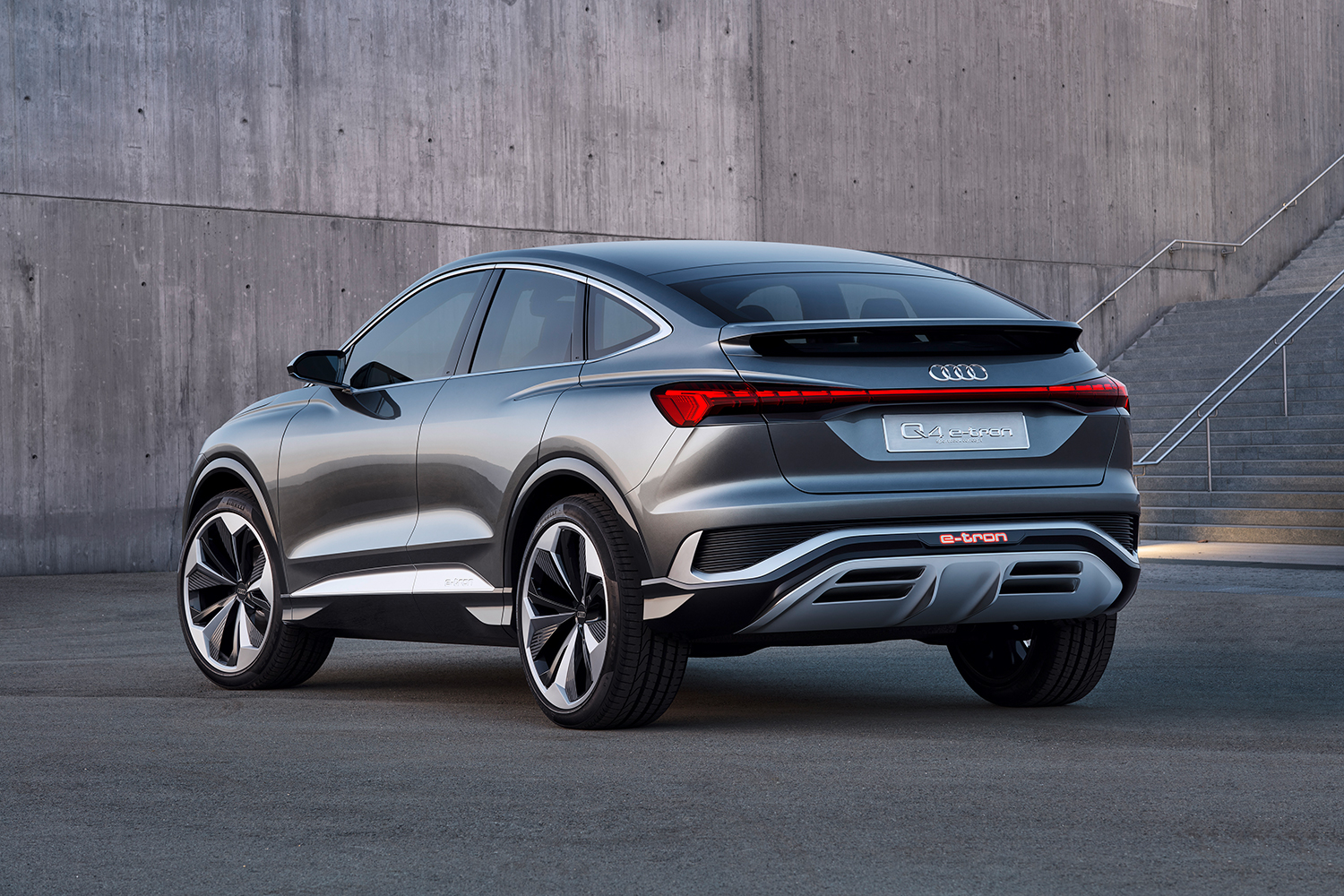 The color scheme emphasizes the sense of spaciousness. While light, warm colors dominate the upper section of the cabin, the dark carpet in the floor section provides a contrast. The headlining, the window pillars and the upper section of the door rail and dash panel are fitted with white and beige microfiber textiles. Sustainability is the top priority not only in terms of the electric drive in the Audi Q4 and Q4 Sportback:

The floor covering is made of recycled materials. Instead of chrome-plated metal decor frames, the surfaces are covered with a high-quality multi-layer paint finish. The painted frosted Plexiglas on the applications creates an intensive depth effect. 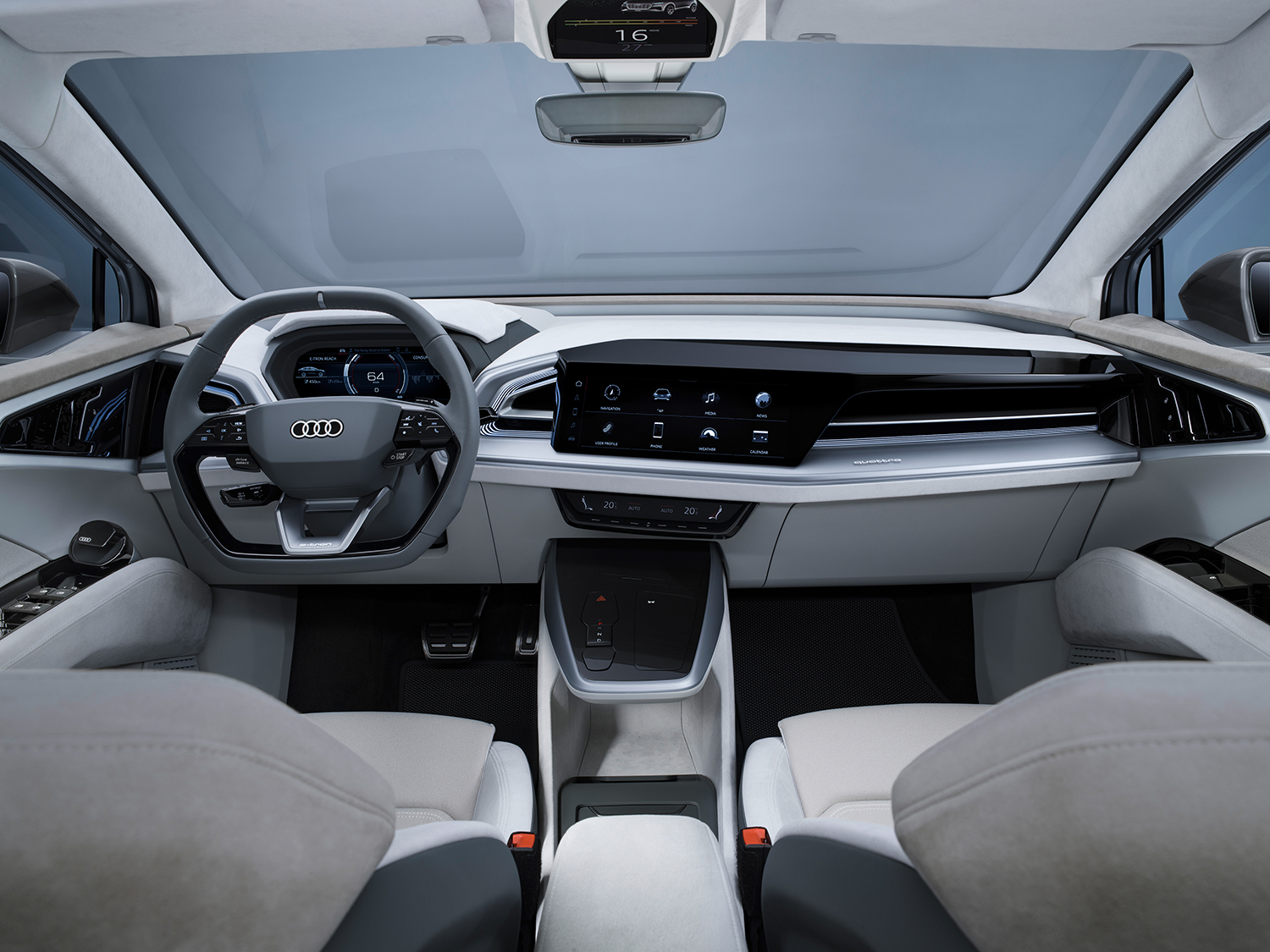 The display of the Audi virtual cockpit with the most important display elements for speed, charge level, and navigation is located behind the steering wheel. The large-format head-up display with an augmented reality function is a new feature. It can display important graphical information, such as directional arrows for turning, directly on the course of the road.

Take a look at the Audi Q4 Sportback e-tron in the video above, and expect more information to come closer to its official release in 2021.