Nissan has unveiled the high-anticipated all-new Nissan Ariya electric coupé crossover, marking a new chapter for Nissan electric vehicles. The Ariya – Nissan’s first all-electric coupé crossover– offers powerful acceleration and smooth, quiet operation, as well as an interior with a welcoming, luxurious lounge-like atmosphere. Its stress-free autonomous driving features, voice personal assistance and seamless connectivity heighten on-road confidence and provides a welcoming environment for the driver and passengers. And with an estimated range of up to 500 kilometers (310,69 miles), Ariya is the perfect partner for daily commutes and road trips alike.

The Nissan Ariya is heavily based on the similarly-named concept vehicle displayed at the 2019 Tokyo Motor Show and first hinted at with the IMx at the 2017 Tokyo Motor Show. It’s the first production model to represent Nissan’s new electrified brand identity, forging a path toward a new automotive era where electrification, optimized platform packaging and seamless vehicle AI technology will become standard. 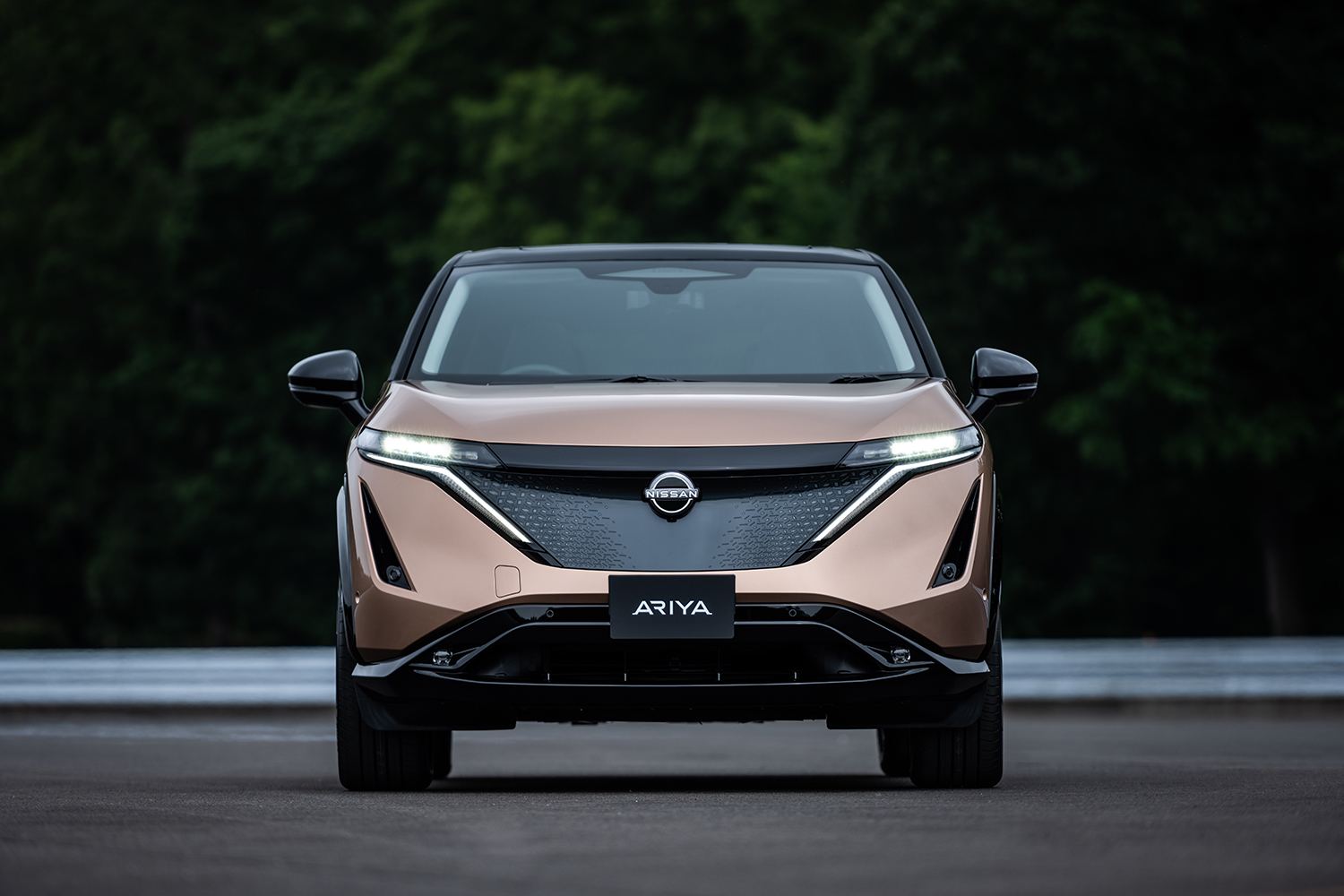 Embracing the Japanese term iki, which characterizes the Ariya’s chic, cutting-edge nature, the front of the vehicle appears seamless, elegant and fresh. It’s highlighted by a shield – a reimagined grille for the EV era. The shield, incorporating a 3-D, traditional Japanese kumiko pattern just under the smooth surface, protects sensing equipment used for ProPILOT functions and Intelligent Key detection without the aesthetics interrupting operation. 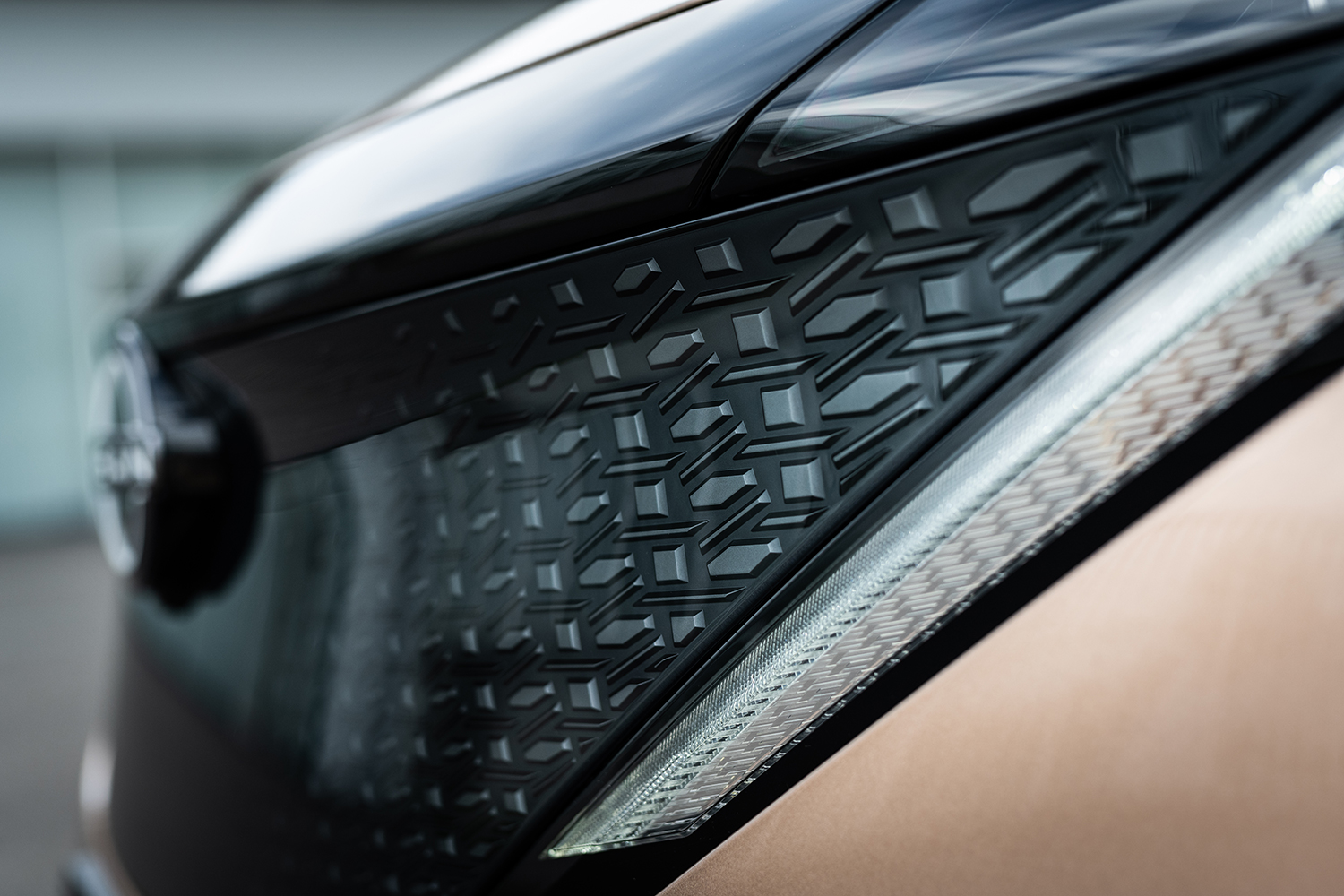 Nissan’s redesigned brand logo is prominently placed at the center of the aerodynamic shield, beaming with crisp definition from the 20 LEDs that compose it. The new brand logo represents Nissan’s passion and dedication towards innovation by challenging conventional approaches. In keeping both sun and bar design elements, the logo signals a respect for the company’s heritage while moving towards a future of mobility services and electrification. 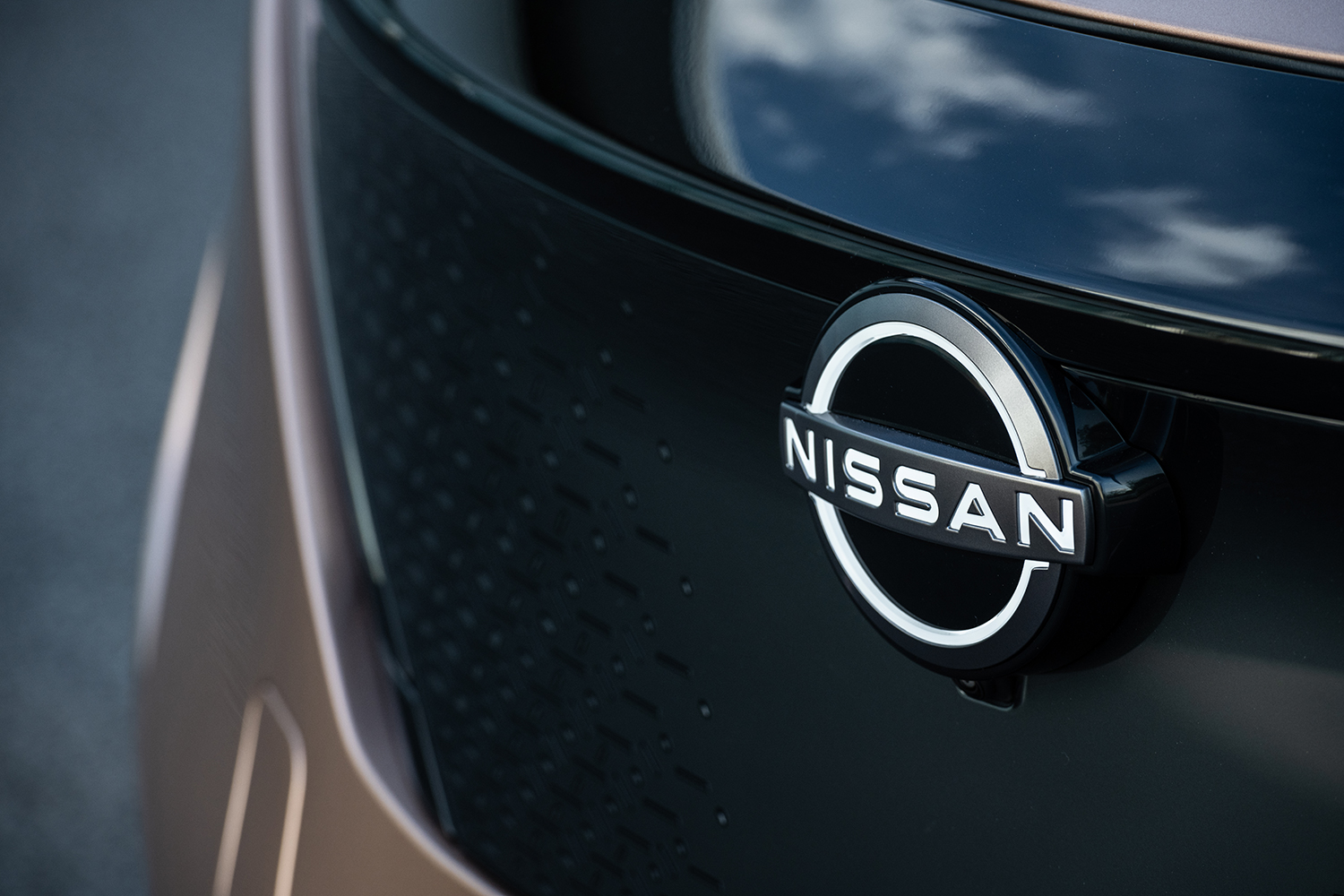 The lower section of the shield is bordered by subtle lighting that illuminates, along with the logo, when the Ariya is ready for operation. Thin LED headlamps, constructed with four 20-millimeter mini-projectors, are combined with sequential turn signals to reinvent Nissan’s signature V-motion design. 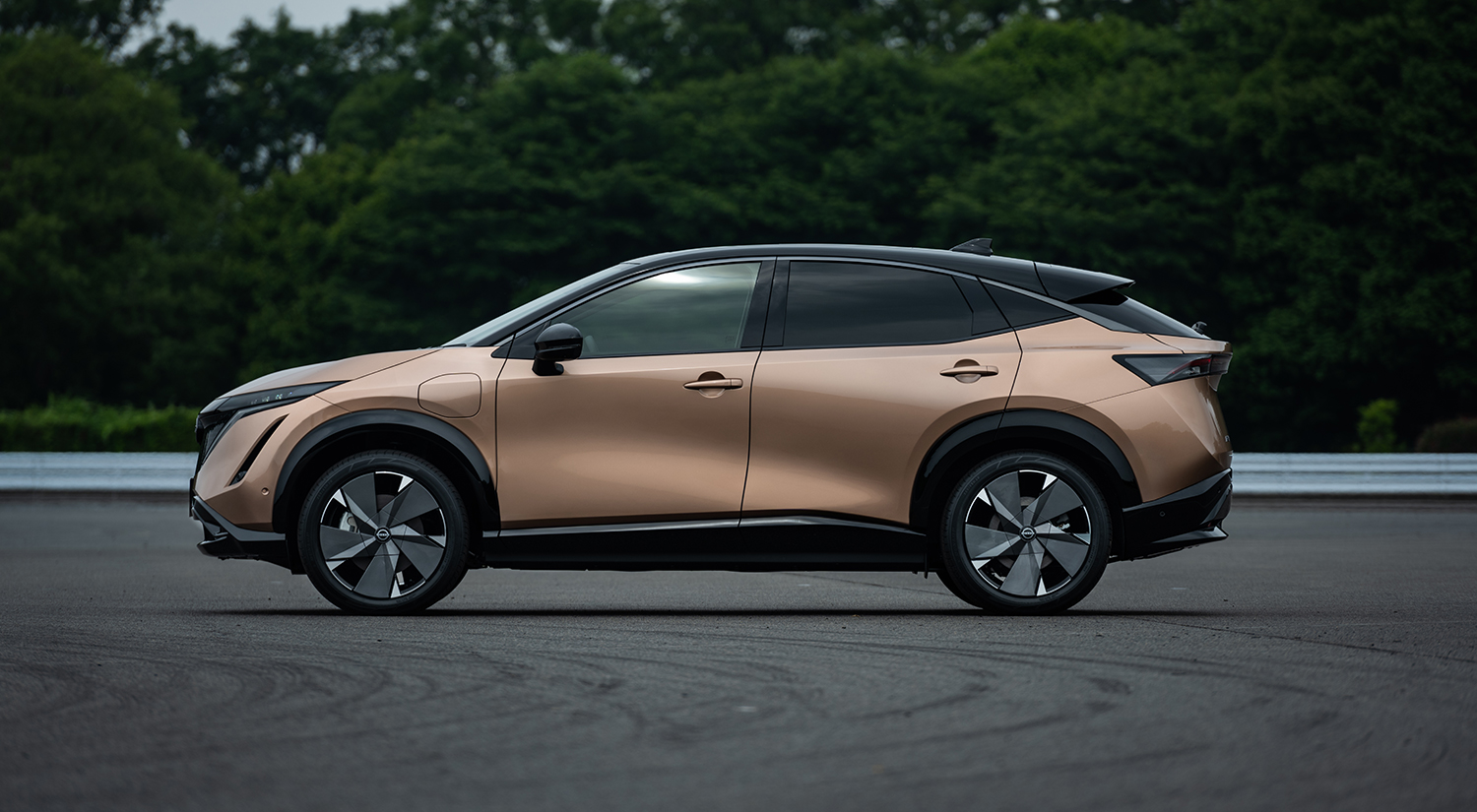 When viewed from the side, the Ariya seems to be constantly slicing the air thanks to a low, sleek roofline. Sporty, five-spoke, 19-inch aluminum wheels (20-inch wheels also available, depending on the grade) communicate the vehicle’s dynamic stance and sporty nature. A single, uninterrupted horizon line that stretches across the side profile, linking the front fascia and the rear, conveys linear movement, creating architectural beauty in tension and drama from every angle. 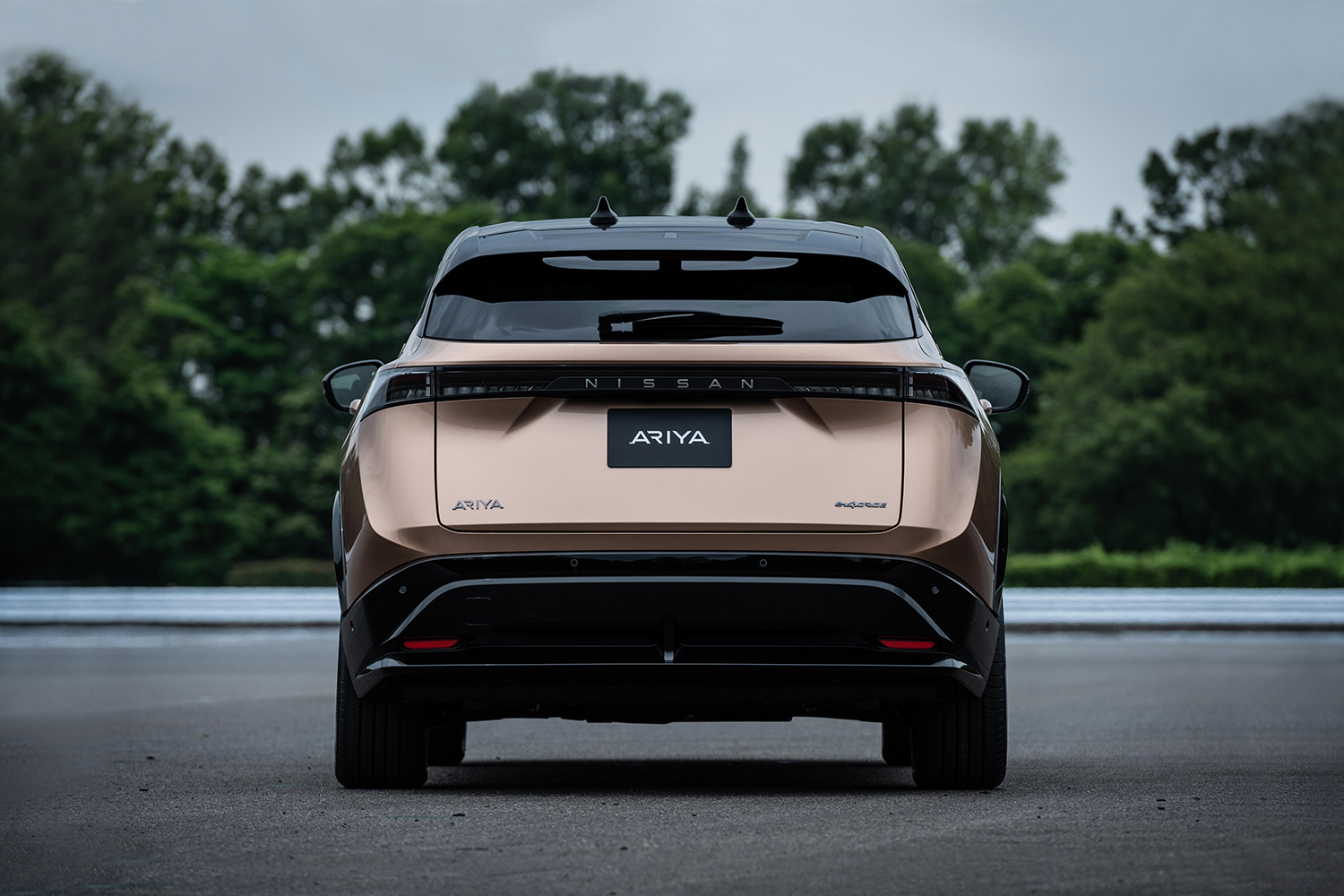 The rear of the Ariya is equally striking, characterized by a steeply raked C-pillar that blends flawlessly into the rear deck. The one-piece light blade, representing the rear combination lamps, has been engineered to give a blackout effect when parked, and a consistent red illumination when in use. Rear fender flares and a high-mounted rear wing signal the Ariya’s powerful EV capabilities. 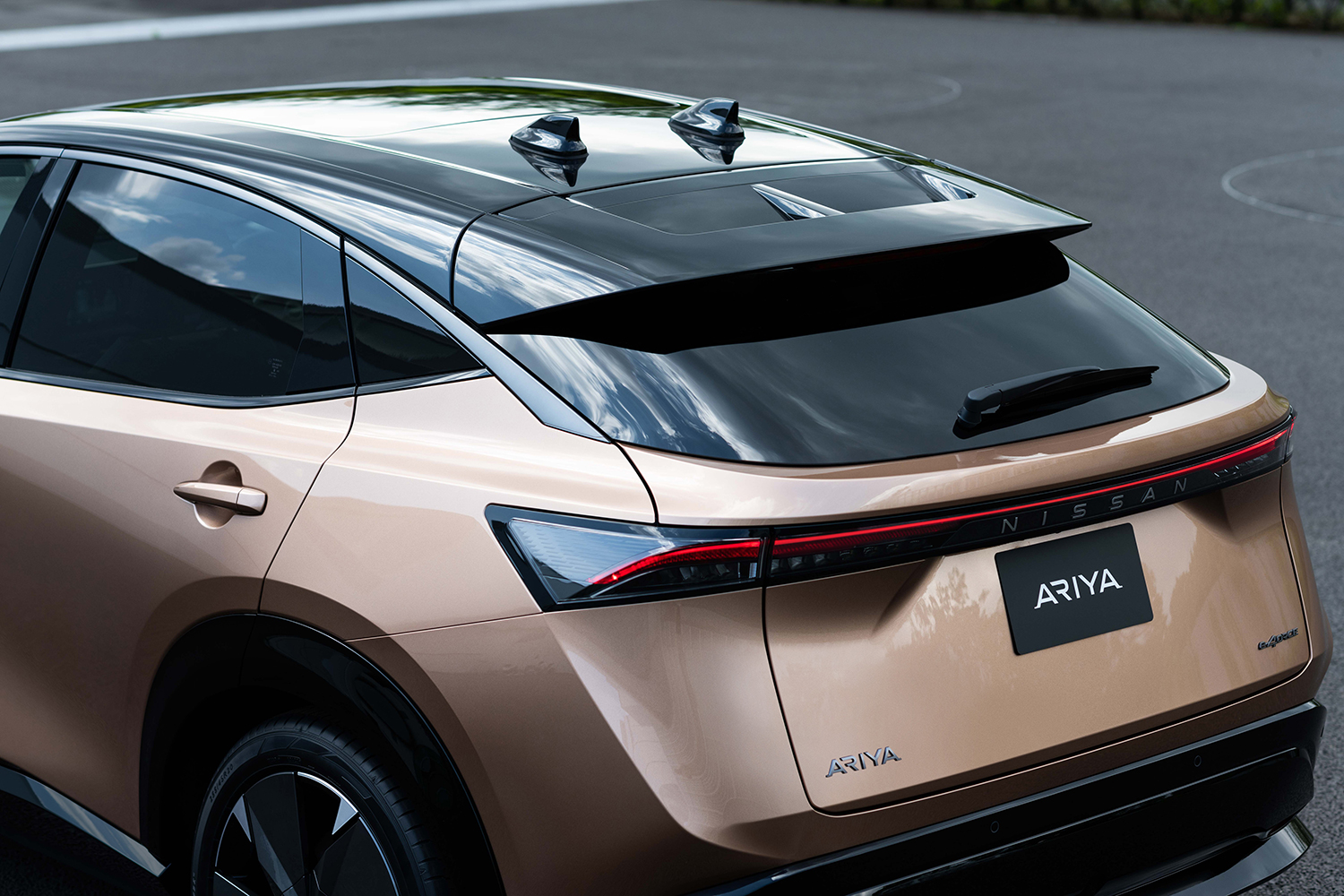 A newly-developed exterior two-tone Copper color package, Akatsuki, expresses the moment just before dawn, as the sun marks the beginning of a new day. The combination of copper with a black roof highlight the body’s flowing nature and movement of an EV while the copper tone itself references conductivity and the dawn of a new automotive era. 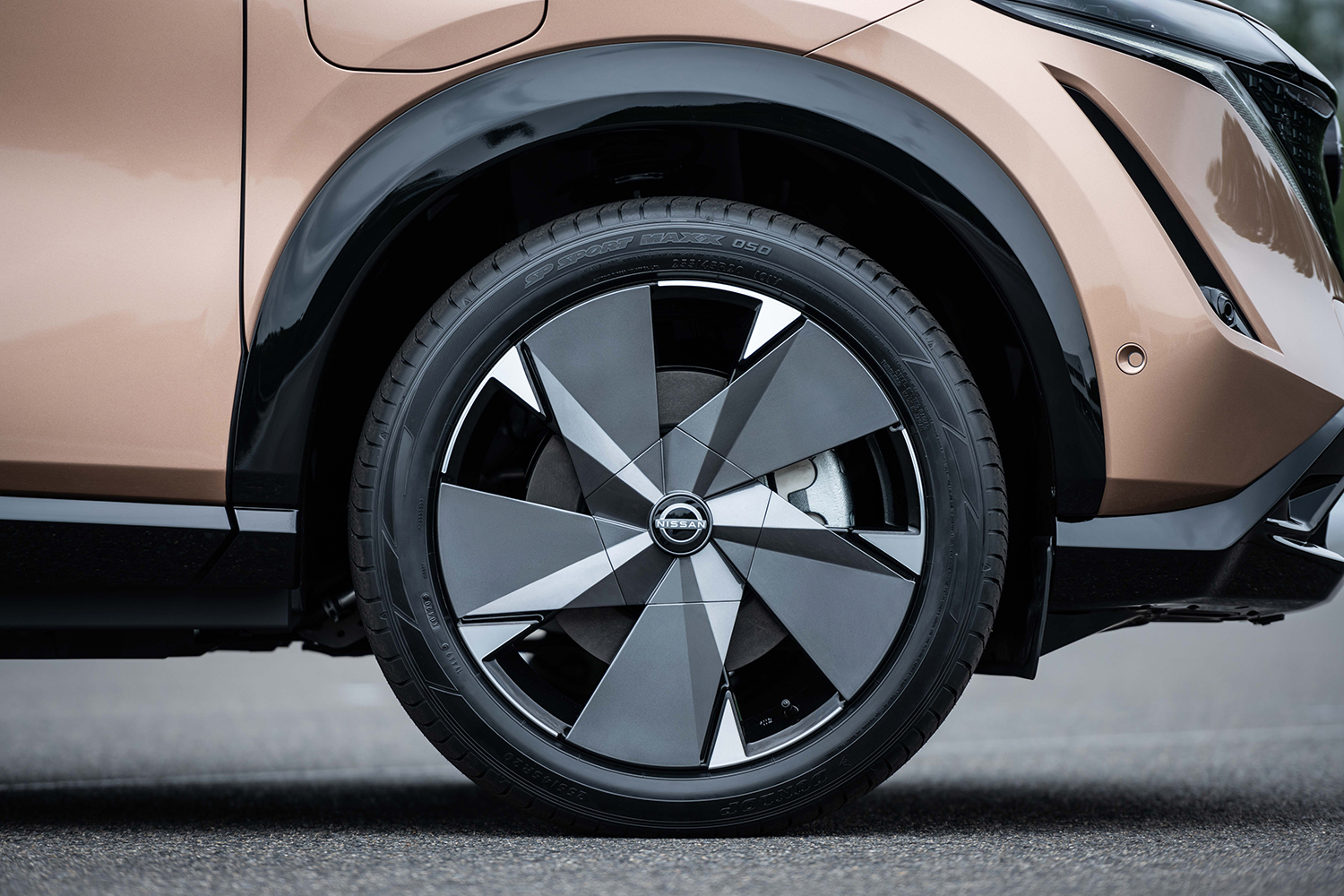 Defined by the Japanese term ma – referring to spatiotemporal openings – the cabin of the Ariya has been designed in the most efficient and comfortable way. The interior is more akin to a sleek cafe lounge on a starship, evoking performance and intrigue than to a traditional automotive cabin. The advantages provided by the company’s all-new EV platform have enabled the Ariya to offer one of the most spacious cabin in its class. 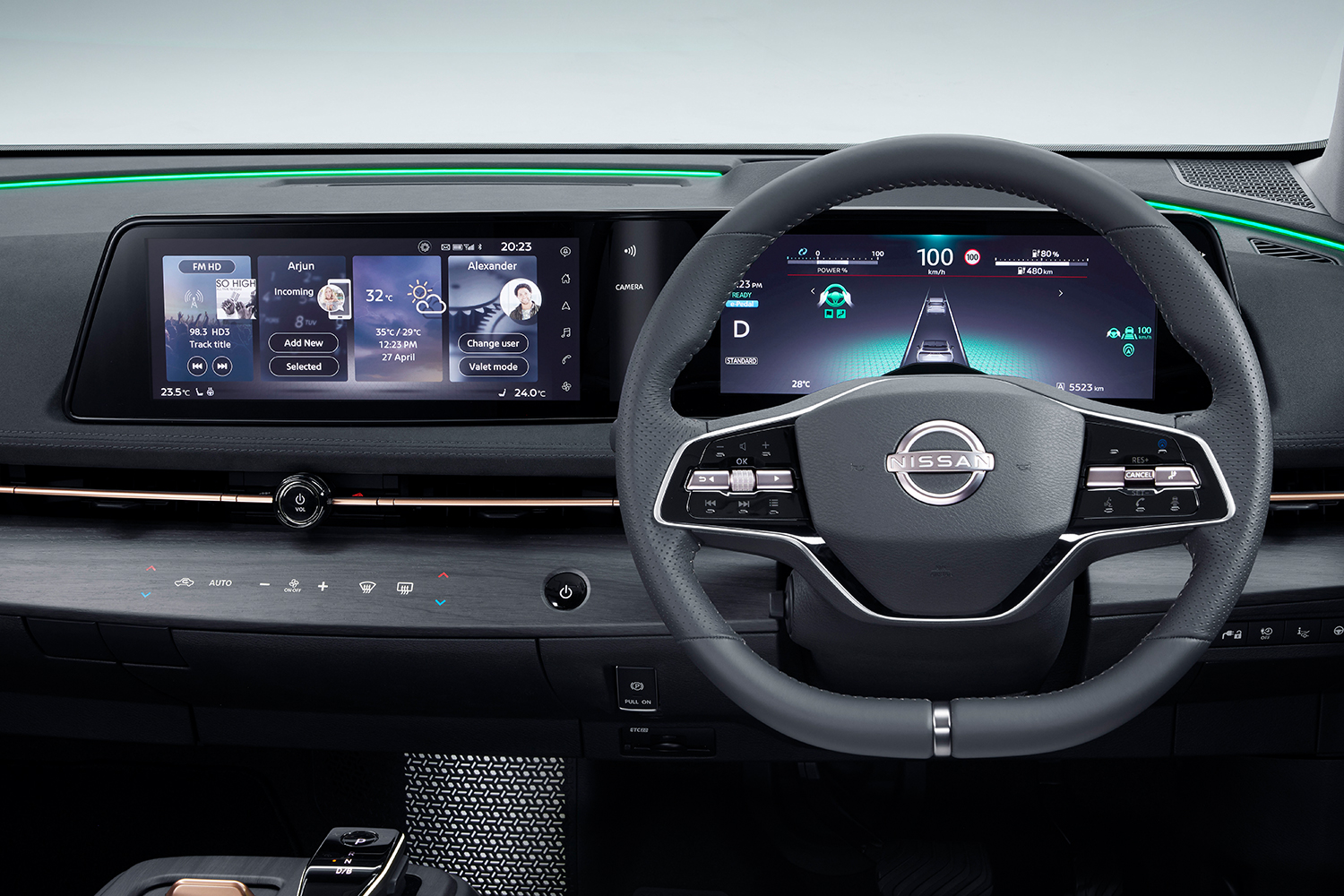 Front-seat occupants are treated to the Ariya’s minimalist dashboard, which blends seamlessly with the shape of the cabin, transitioning into the doors. It’s devoid of buttons and switches found in conventional vehicles. Primary climate control functions are integrated into the center dash in the form of capacitive haptic switches that offer the same feeling as mechanical switches by vibrating when touched. They only appear when the car is turned on, providing a technological yet luxury touch to the cockpit area. 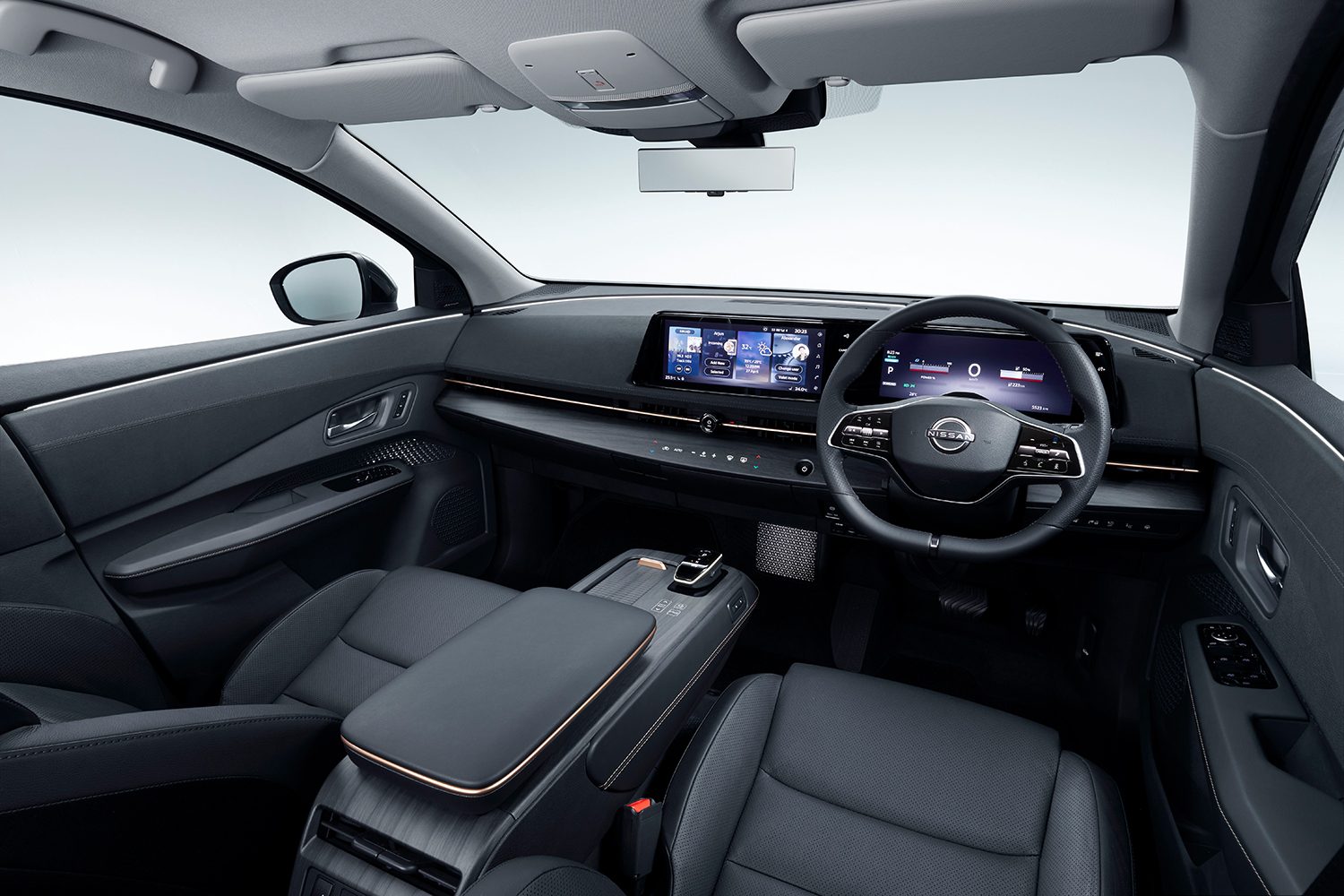 Nissan is empowering the Ariya with the newest version of the automaker’s advanced driver assistance system, ProPilot Assist 2.0. The original ProPilot was a Level 2 partially automated system, which allowed the vehicle to control speed, distance from other cars, and keeping the car in the intended lane with minimal input from the driver. Cameras detect lane markings at highway speeds, and then adaptive cruise control, lane-keep, and blind spot detection systems keep you in that lane until you deliberately change lanes. With the Ariya, ProPilot Assist is getting an active driver monitoring system to enable hands-free driving on highways.

The Ariya is scheduled to go on sale in Japan in mid-2021, followed by the US and Canada later in the year with a starting price of around $40,000.