Its smooth exterior doesn’t seem to like staying under indoor and outdoor car covers, instead preferring to be hit by the wind at high speeds, as its aerodynamic design suggests.

The Essenza SCV12 was created for exclusive track use, with engineering solutions derived from racing. The V12 engine is able to deliver over 830 hp, with a significant power uplift from the RAM effect at high speeds. The exhaust pipes were designed by Capristo to reduce the back pressure, improving performance and emphasizing the unique sound of the engine. The power is handled by a new X-trac sequential six-speed gearbox as a structural element within the chassis, combined with rear-wheel drive to ensure compactness, structural continuity, and greater torsional stiffness. 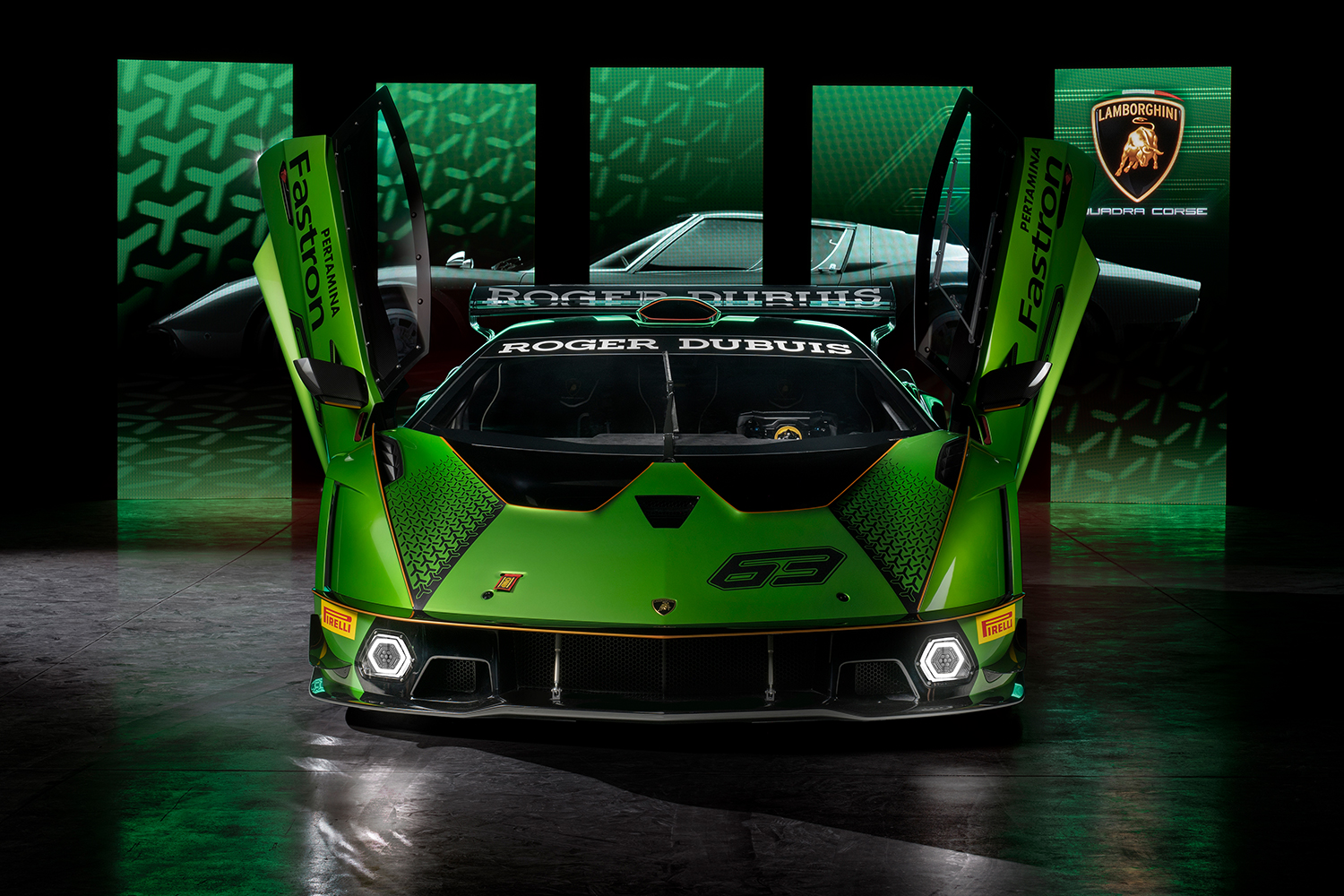 To ensure maximum agility and stability on even the most demanding tracks, kinematic solutions inspired by racing prototypes have been adopted, such as the push-rod rear suspension installed directly on the gearbox. The panorama is completed by specific slick Pirelli tires mounted on magnesium rims (19” front, 20” rear), which frame the brake discs and calipers developed by Brembo Motorsport. 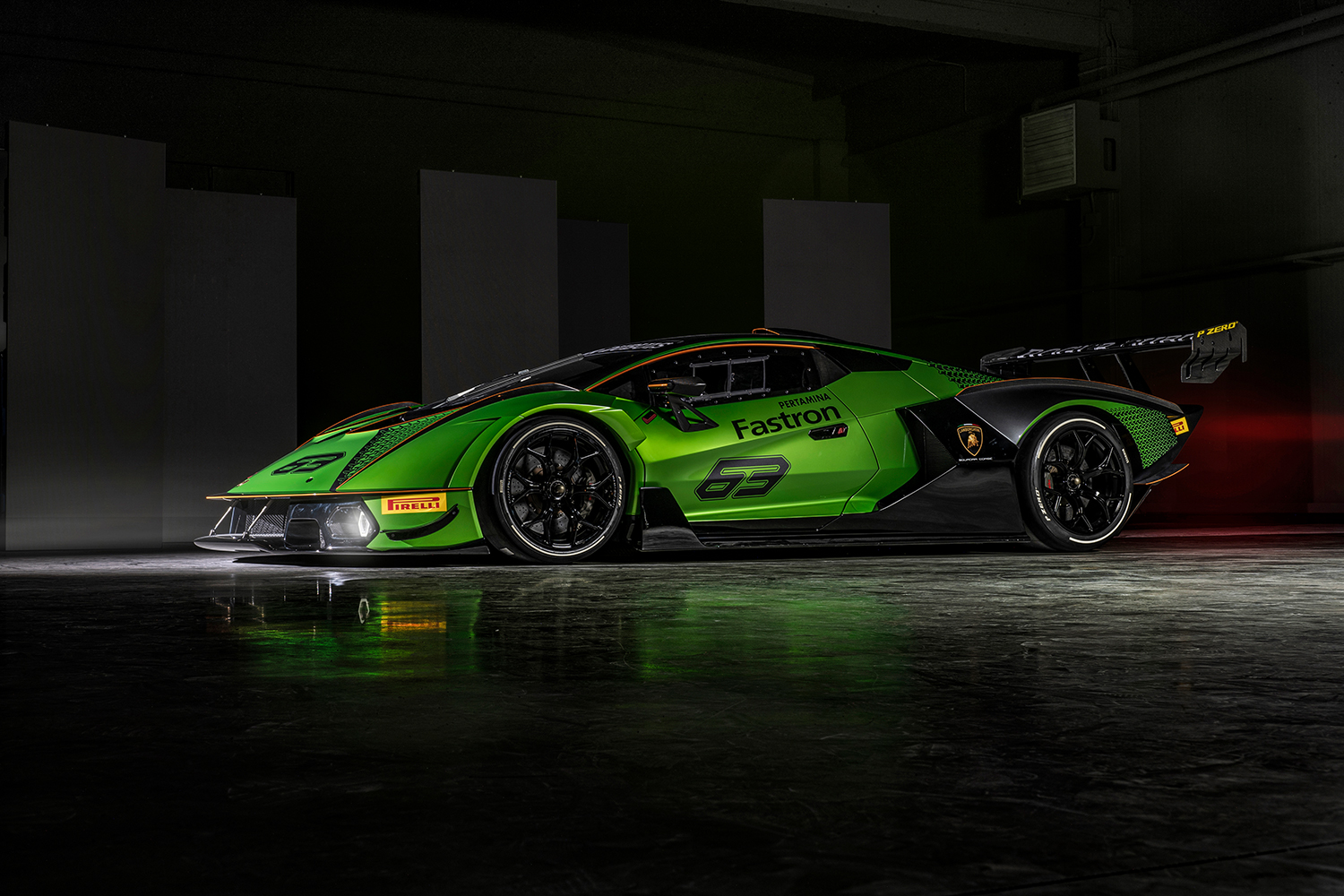 The aerodynamics benefit from Lamborghini Squadra Corse’s GT racing experience to ensure a level of efficiency and higher downforce levels than a GT3 car, with a value of 1,200 kg at 250 km/h.

The front hood has a double air intake with a central rib, typical of the Huracán racing cars, which separates the hot airflow coming from the radiator and conveys the cold air to the airscoop located on the roof. The front features a splitter and two lateral elements; on the sides, the flows for engine and gearbox cooling have been optimized through the use of vertical fins situated on the side sills. The aerodynamic package is completed by the large adjustable double-profile rear wing. 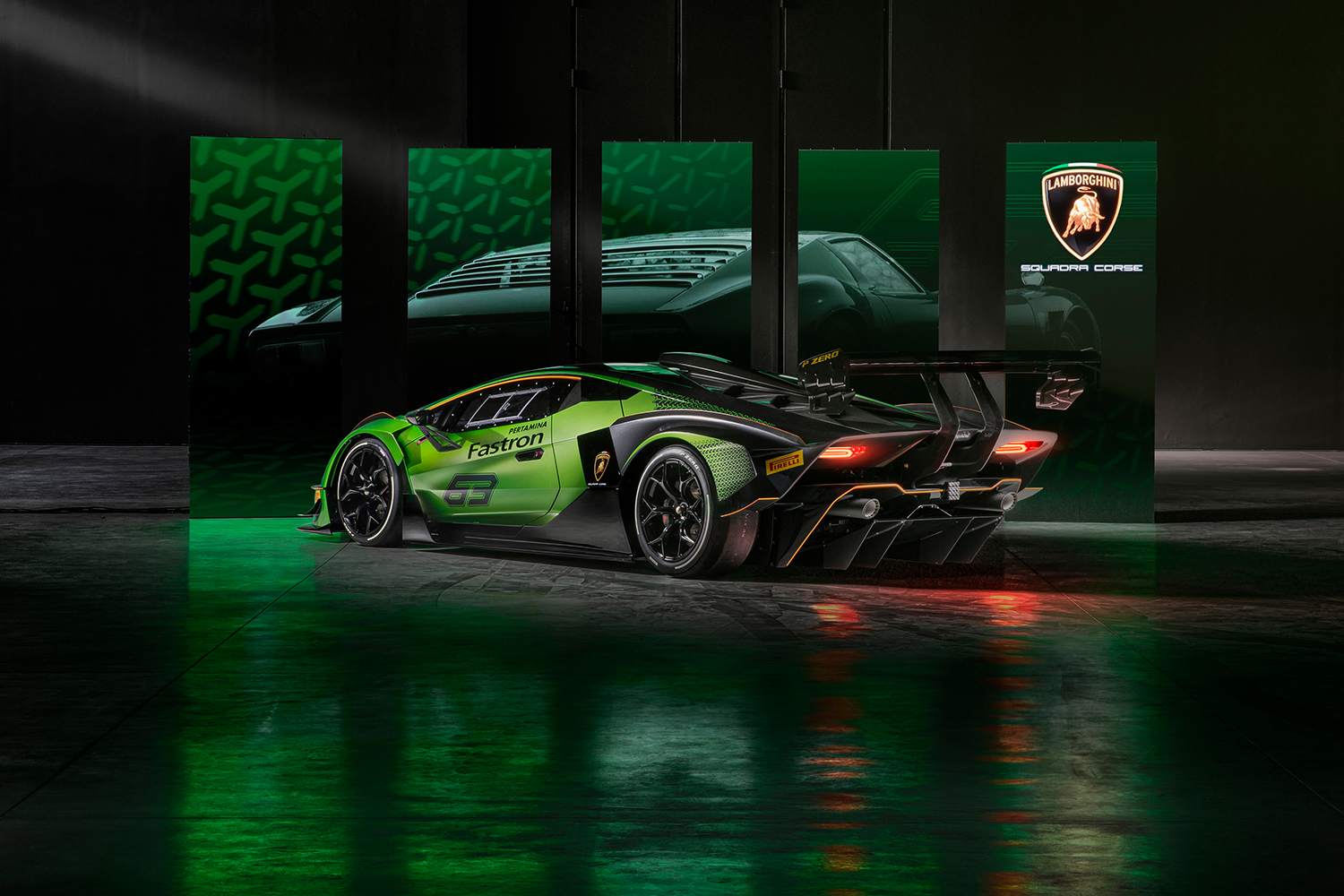 The design of the Essenza SCV12 is the result of the creative work by Lamborghini Centro Stile, which has designed all racing cars produced by Lamborghini since Squadra Corse was established. The essential nature of the car is underscored by the structure of the bodywork, formed by only three elements to enable quick replacement when necessary during pit stops. The exclusive Verde Silvans, Grigio Linx, Nero Aldebaran Gloss and Arancio California launch livery displays the trademark logos of long-standing Lamborghini Squadra Corse partners, Pertamina, Pirelli and Roger Dubuis. 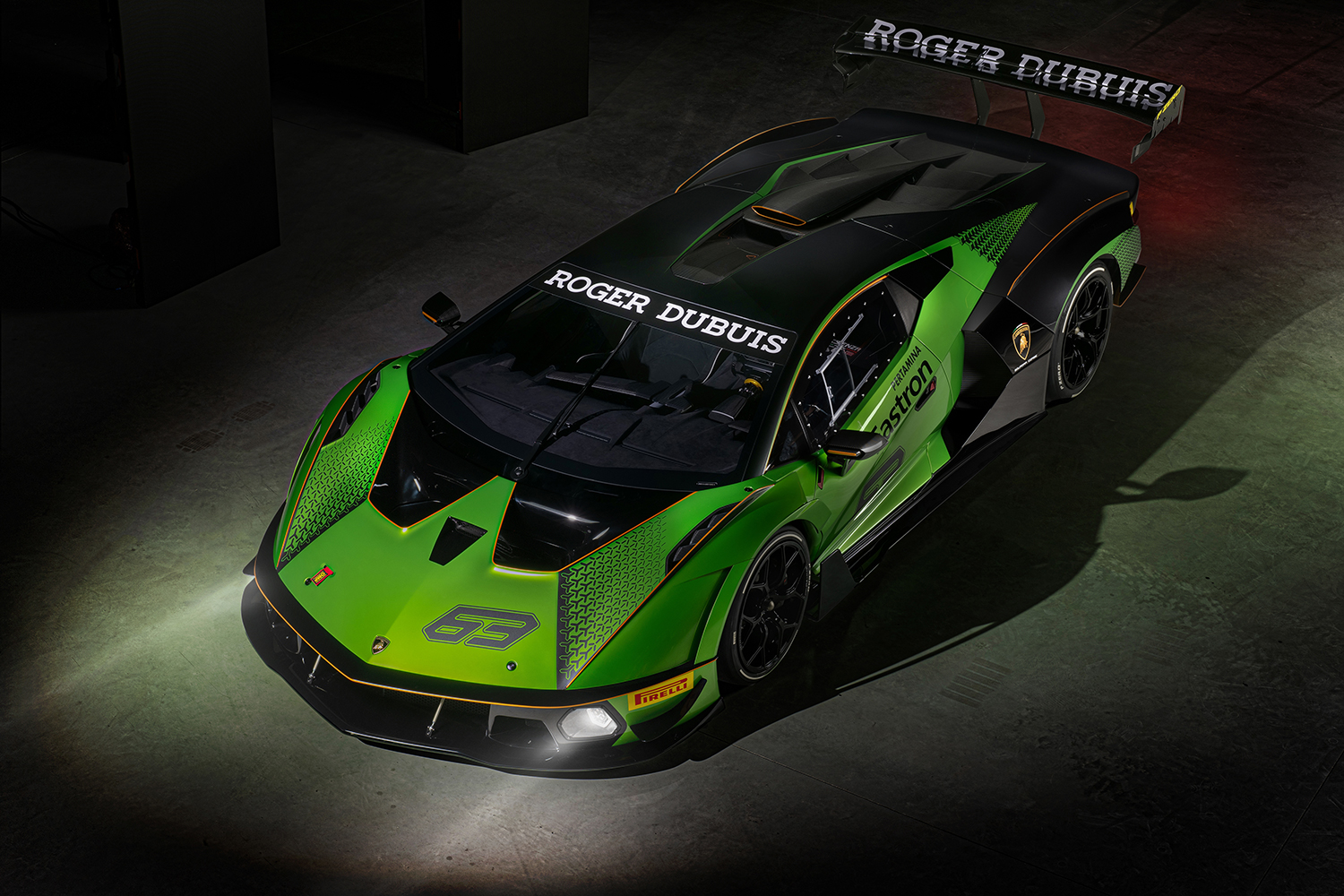 The sleek yet taut and dynamic lines combine the appeal of 1970s prototypes and elements typical of Lamborghini’s DNA, like the hexagonal geometry that characterizes the front headlights, and the roof airscoop and air vents that frame the steering wheel. There is also the unmistakable “Y”, the stylistic feature repeated on the livery and in the cockpit, where each element represents the best compromise between lightweight, functionality and design. In fact, the instrument panel and dashboard are supported by an asymmetrical carbon “Y”, a load-bearing and stylistic element that frames the cockpit, designed to put the driver at the center of an absolute driving experience.

The design of the multifunction steering wheel with display was inspired by F1 single-seater steering wheels to offer the best ergonomics and a perfect feel, without the driver needing remove their hands from the rim with its futuristic yet rational design. The specific FIA homologated OMP seat with carbon shell embraces the driver to ensure comfort, safety and stability. 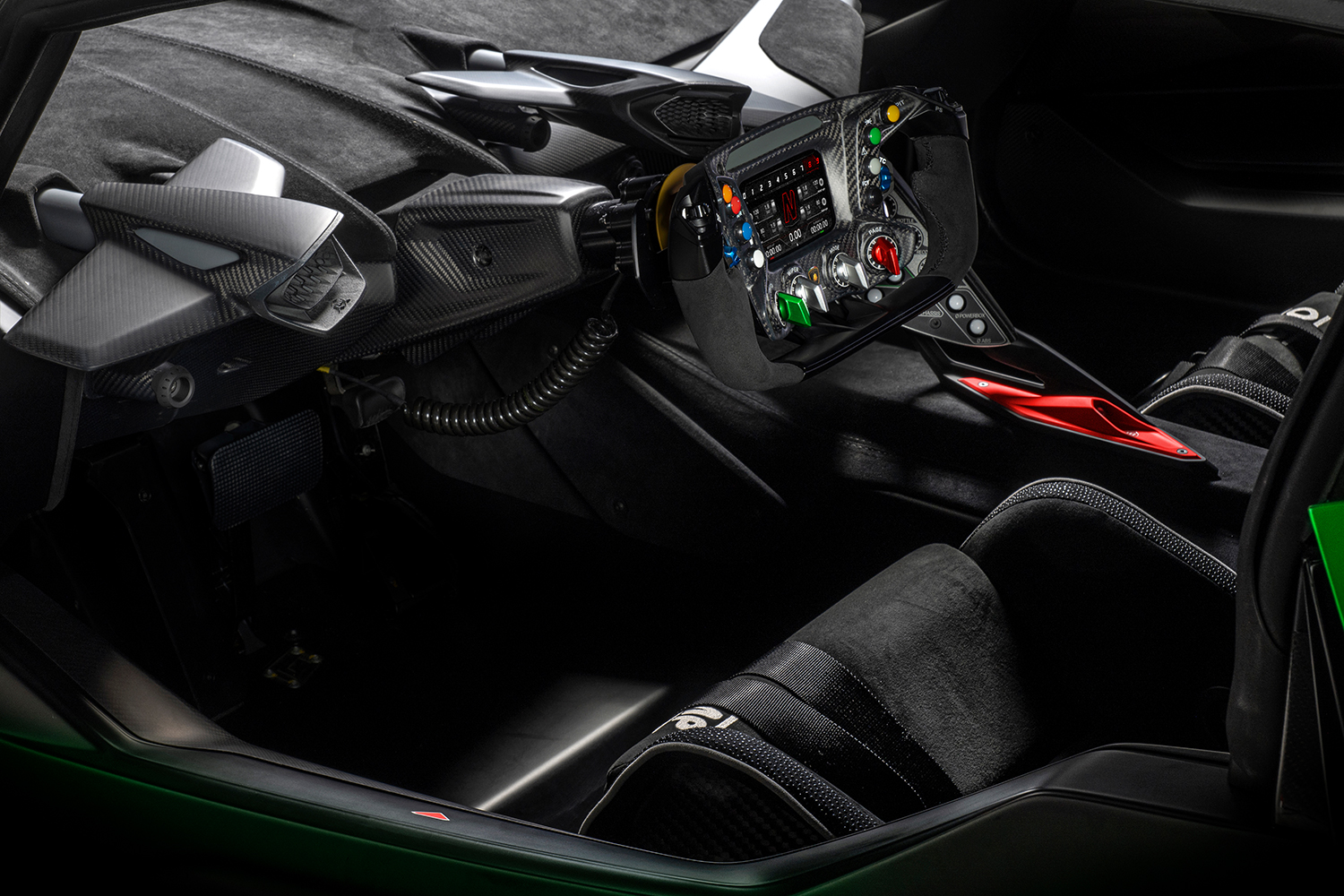 Essenza SCV12 customers will become part of an exclusive club that will give them access to special programs to drive their hypercar on the most prestigious circuits in the world. The program includes storage service in a new hangar built in Sant’Agata Bolognese for the Essenza SCV12 club. Each car will have a personalized garage and dedicated services, including webcams to allow customers to monitor their cars 24 hours a day using an app. The facility also houses the “Lamborghini Squadra Corse Drivers Lab” by Tecnobody to offer athletic training programs similar to those followed by the official Lamborghini racing drivers.

The track calendar will start in 2021 with “arrive and drive” events held at numerous FIA Grade 1 homologated circuits.