Bugatti has unveiled its fastest, most powerful, and lightest car to date — the Bolide. The experimental study of the Bugatti Bolide is a track-oriented hyper sports car featuring a W16 engine derived from series production as powertrain combined with a minimal body for maximum downforce. It therefore promises to offer the ultimate Bugatti performance kick.

At the same time, the Bugatti Bolide is the most extreme, uncompromising, fastest and lightest vehicle concept in the company’s recent history – with an incredible weight-to-power ratio of 0.67 kg per PS. This is made possible by the combination of the W16 engine with 1,850 PS and a vehicle weight of just 1,240 kilograms. The Bugatti Bolide achieves figures that are almost on par with Formula 1 while its top speed is well above 500 km/h (310 mph) – without compromising maximum handling and maximum agility. The Bolide takes 3:07.1 minutes to complete a lap of Le Mans and 5:23.1 minutes to get around the Nordschleife.

In order to achieve a dry weight of 1,240 kilograms, all the stops have been pulled out with regard to the materials and production processes used, both in terms of what is currently feasible and what will be possible in the future.

All the screw and fastening elements of the Bolide are made completely out of titanium. In addition, hollow, thin-walled functional components made of an aerospace titanium alloy are used in many places. These originate from a 3D printer and are extremely thin with wall thicknesses of up to 0.5 millimeters. However, they are still very stable with a tensile strength of 1,250 newtons per square millimeter. Hybrid components, such as the 0.5- meter-long auxiliary drive shaft, combine wound high-strength and ultra-stiff carbon fibers with 3D-printed titanium end fittings and can withstand a continuous operating temperature of up to 260 degrees Celsius. In this example, this reduces the weight by around half to 1.5 kilograms and, due to the reduction of the rotating masses, increases the revving ability of the engine at the same time. The forces acting on the front and rear wings are transferred by ultralight but very solid titanium elements. They weigh a mere 600 grams at the front and an astounding 325 grams at the rear. 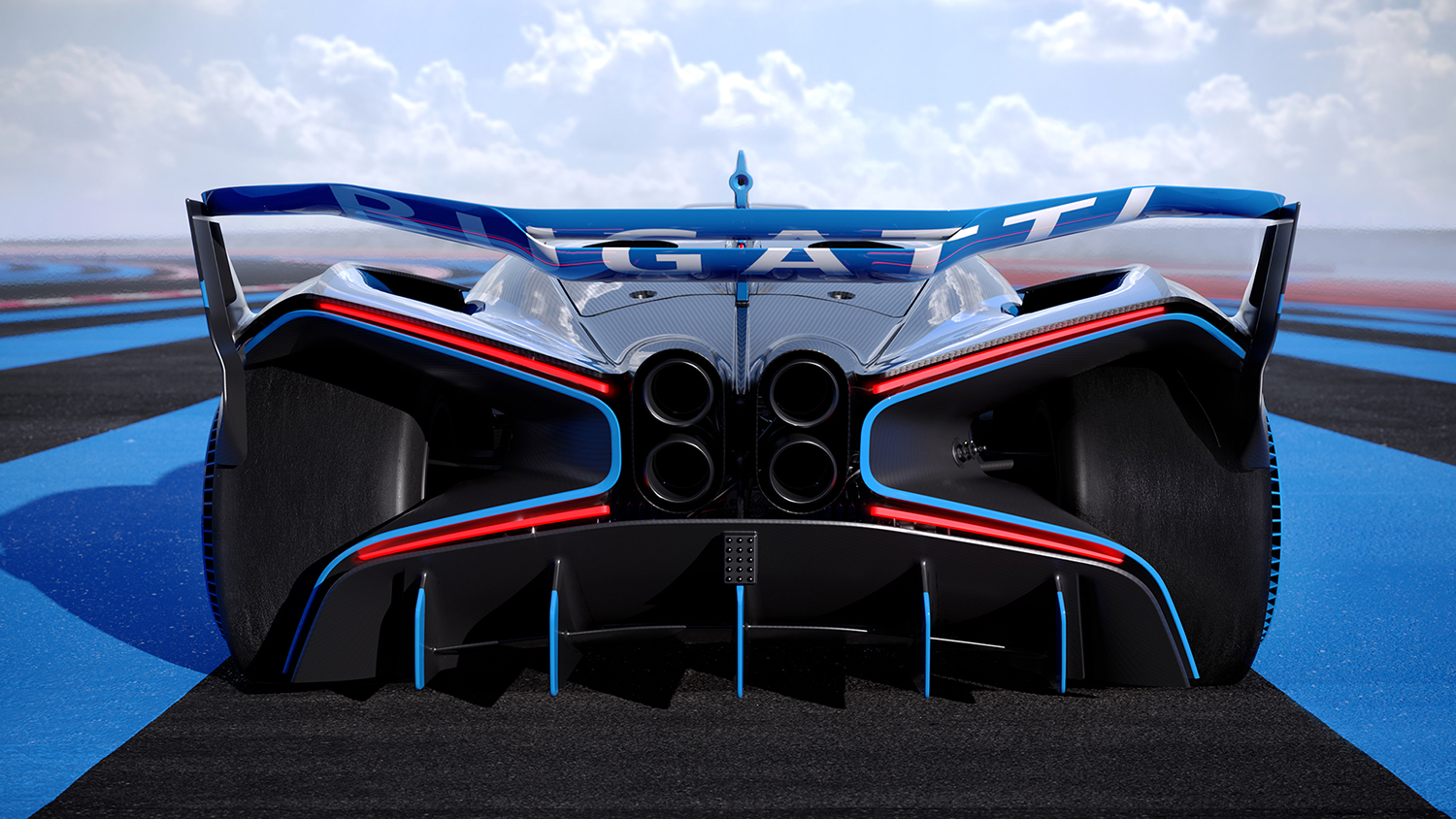 A worldwide innovation is the morphable outer skin of the intake scoop on the roof, which provides active airflow optimization. If the vehicle is driven at a slow speed, the surface of the scoop remains smooth. In contrast, a field of bubbles bulges out when driven at fast speeds. This reduces the aerodynamic drag of the scoop by 10 percent and ensures a 17 percent reduction in lift forces. In addition, the flow onto the rear wing is optimized. At 320 km/h (198 mph), the downforce is at 1,800 kilograms at the rear wing and 800 kilograms at the front wing. 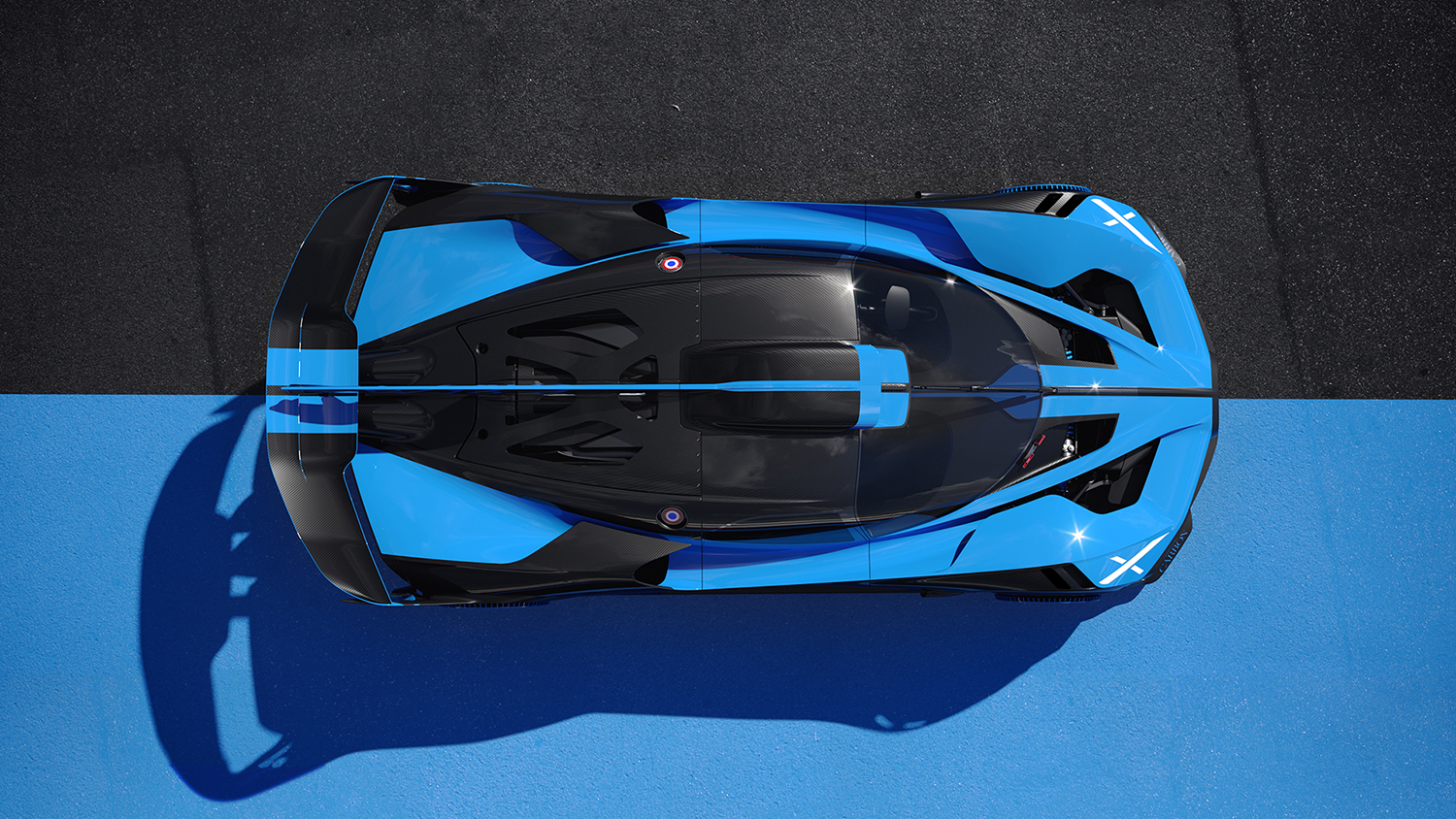 As in Formula 1, the Bolide decelerates with racing brakes with ceramic discs and coatings. The brake calipers weigh only 2.4 kilograms each. The front forged magnesium rims with central lock weigh 7.4 kilograms, while the ones at the rear weigh 8.4 kilograms – with a very wide tire size of 340 millimeters on the front axle and 400 millimeters on the rear axle (Chiron: 285 mm at the front and 355 mm at the rear). A compressed-air-driven jack system with four rams makes tire changing easier, a quick refueling system allows pressure refueling. 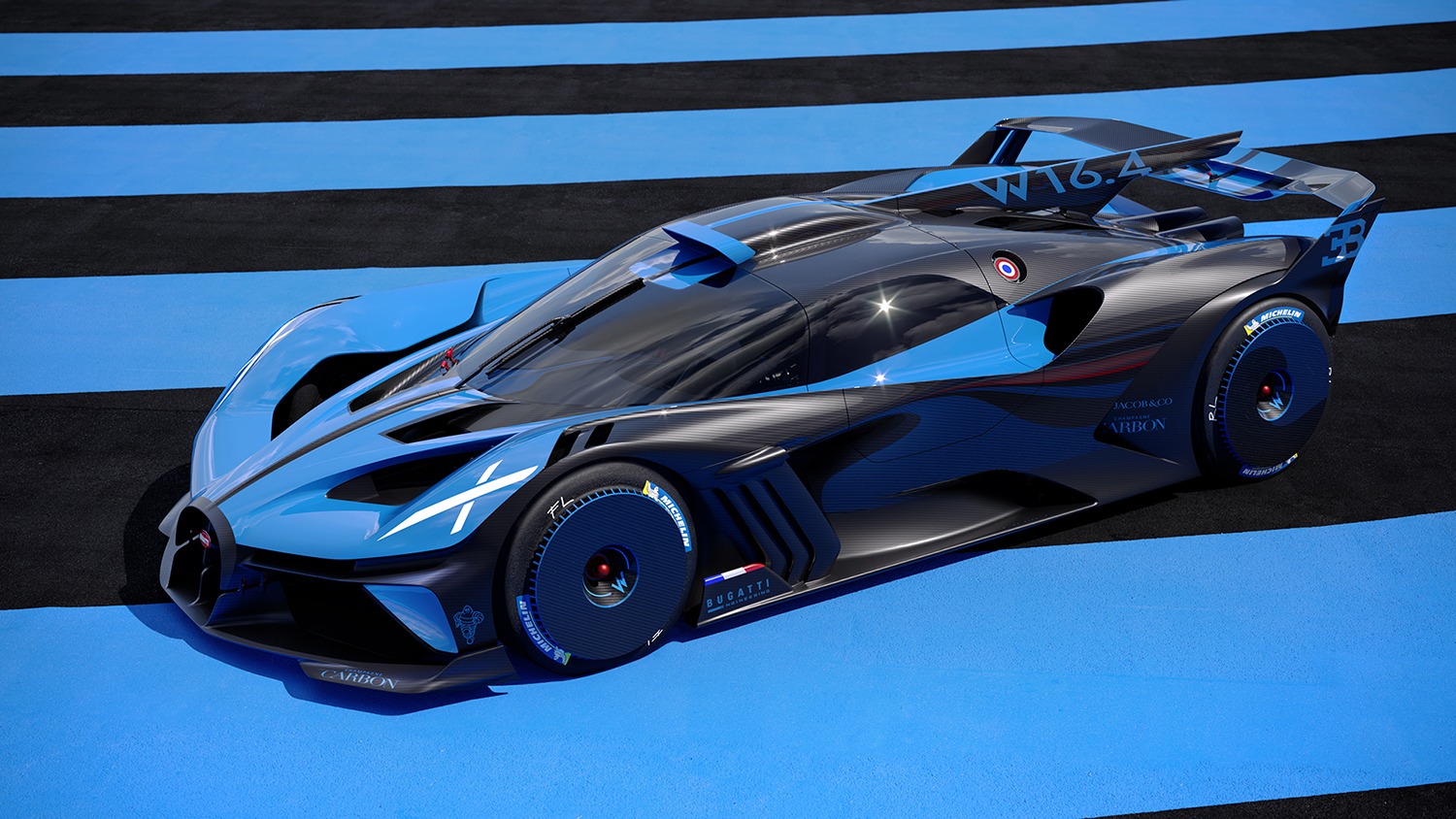 The Bugatti team developed a light monocoque made of carbon around the drive. The integral front end flanged to it is also made of high-strength carbon fibers, as are the fully aerodynamically effective underbody and the monocoque itself. The single-fiber tensile strength of the fibers used is 6,750 newtons per square millimeter, the single-fiber stiffness is 350,000 newtons per square millimeter. These represent figures that are only reached in the aerospace industry. The rear frame, designed as a welded steel assembly, offers a maximum tensile strength of 1,200 newtons per square millimeter, despite a wall thickness of only 1 millimeter – this is made possible by the use of high-strength stainless steel, which is otherwise only used in aviation. 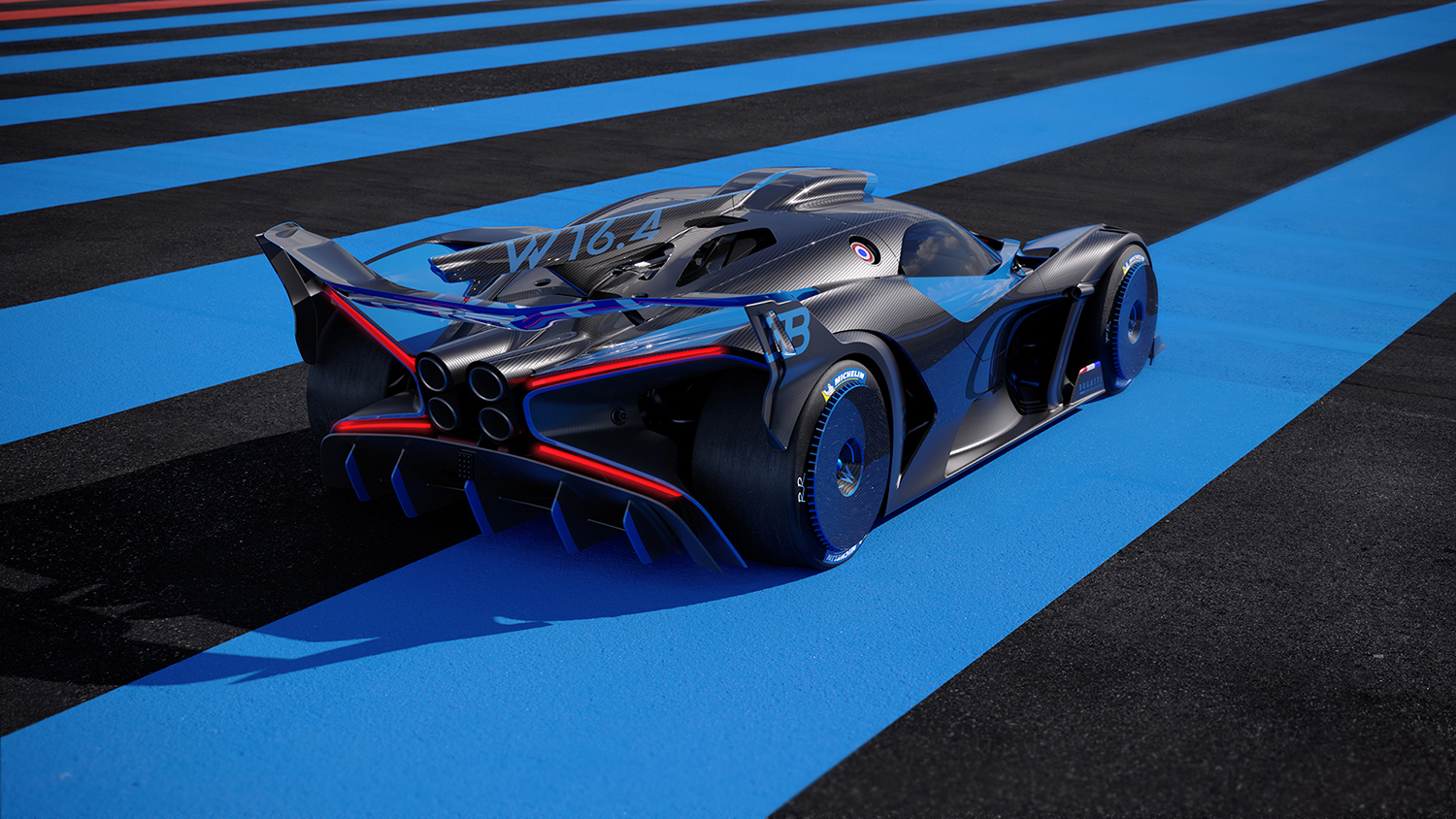 The experimental study of the Bugatti Bolide is also a very special project for Achim Anscheidt, Director of Design at Bugatti. The stylistic challenge was to transform the unyielding demands of aerodynamics and lightweight construction into an aesthetic that reflects the unique Bugatti DNA, but at the same time illustrates the ambition of an impressive weight-to-power ratio. The overall appearance is dominated by air ducts that are more reminiscent of aerodynamically sophisticated Formula 1 racing cars than classic sports cars. The seemingly filigree and half-open front end is a striking example of the combination of air duct expertise, lightweight construction requirements, and aesthetic dynamics. 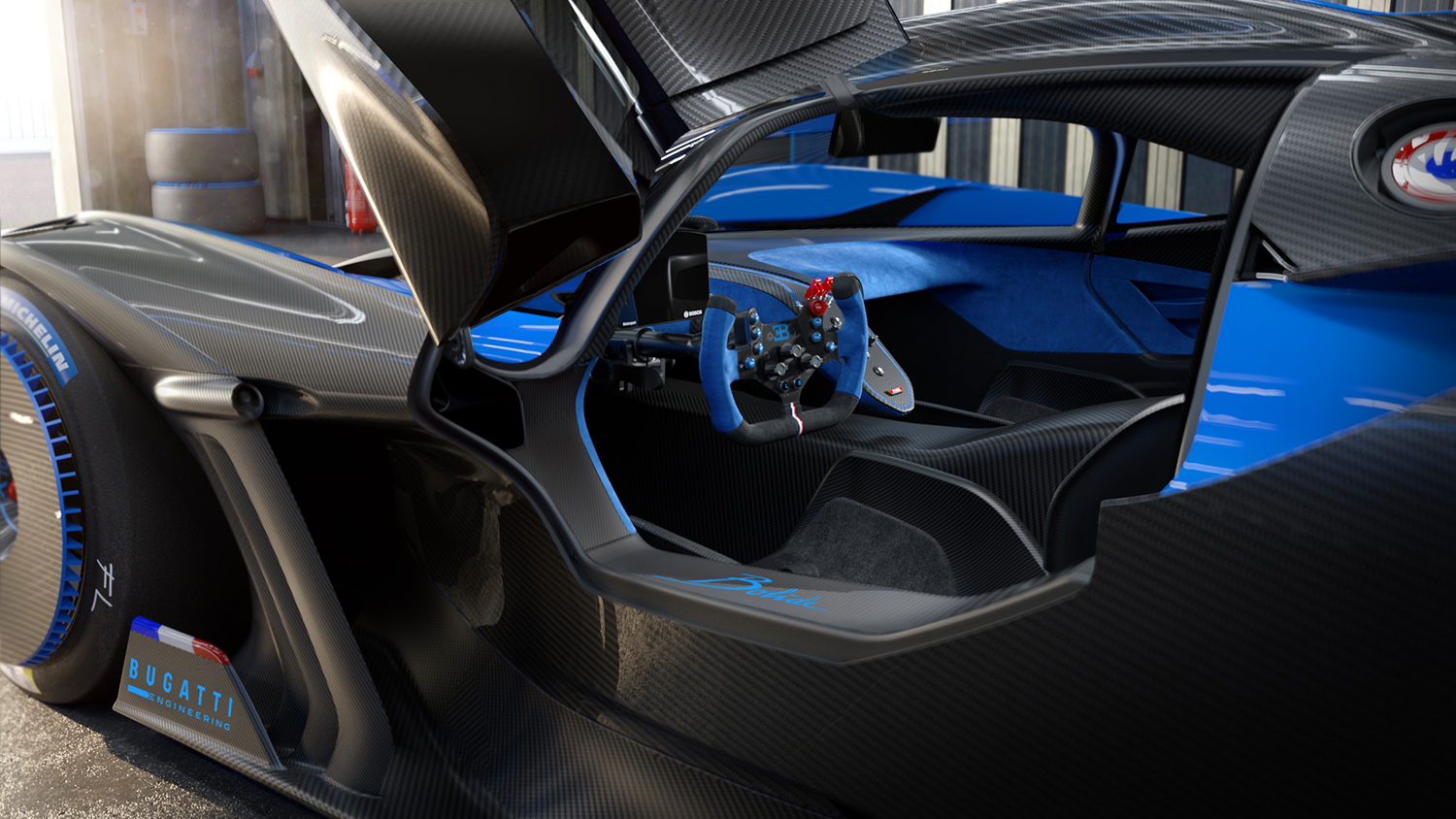 The dramatic effect of the overall proportions is made clear by the aerodynamically favorable overall height of only 995 millimeters. The driver’s ultra-sporty seating permits the low-slung shape of an automotive low-flying aircraft. It is therefore not surprising that the appearance of the Bugatti Bolide invokes the so-called X-planes of aviation history and shows a clear X signature from every perspective. It is indirectly reminiscent of the Bell X-1 jet aircraft which was flown by Captain Charles “Chuck” Yeager 1947, the first person to break the sound barrier at Mach 1.06. The Bugatti Bolide “X-periment” has the shape of an aerodynamically optimized, uncompromising racing car and offers ultra-sporty, superlative performance – with no hint of luxury. 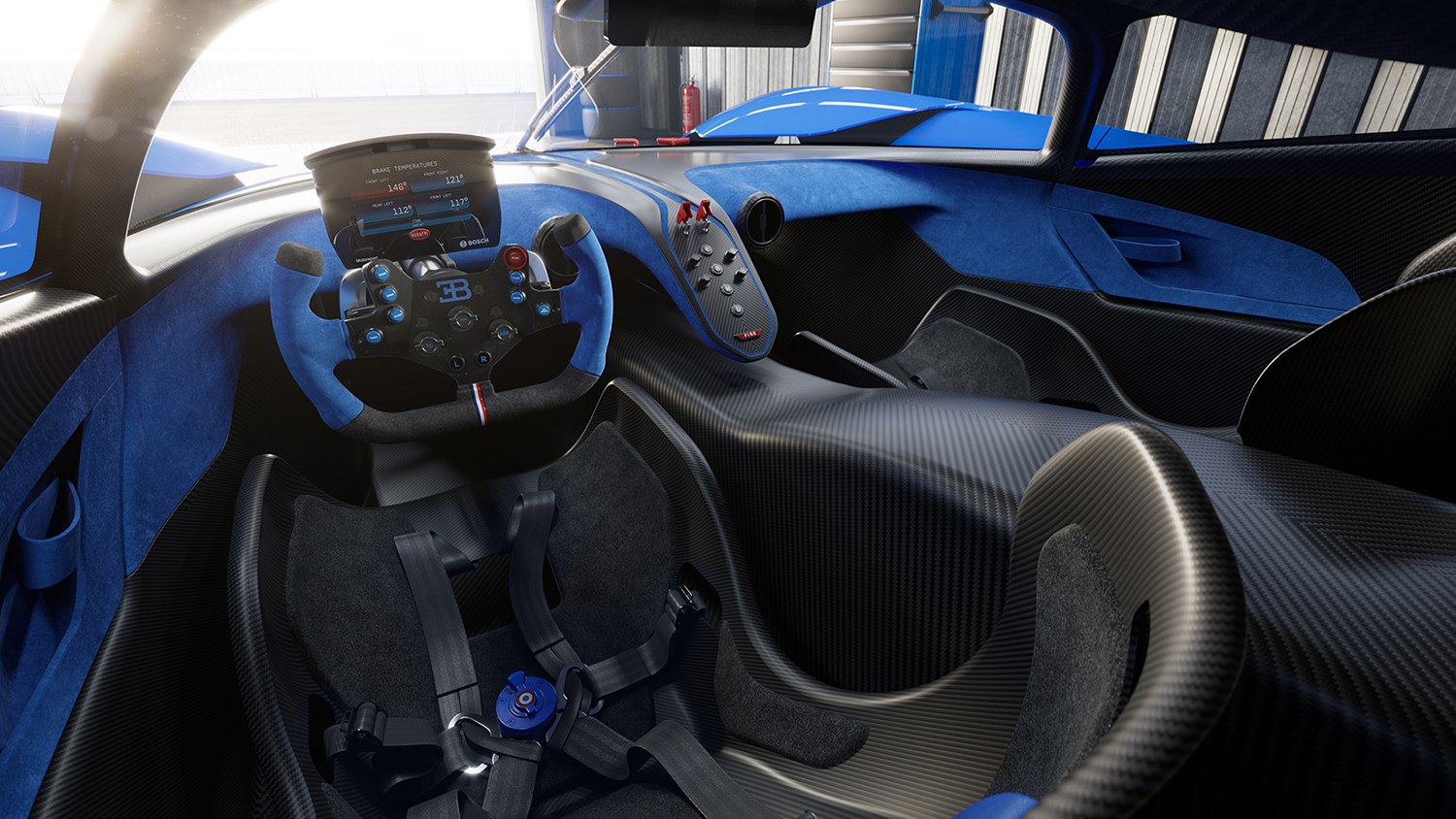 As with other Bugatti vehicles, the Bugatti design team also makes use of a color split in the Bolide. Compared with other models, the share of visible carbon parts is increased by up to 60 percent. Only around 40 percent of the surfaces are painted – in a re-interpretation of the historic French Racing Blue.

The Bugatti Bolide can be seen in further detail in the digital presentation above, while more information can be found out about the Bolide on Bugatti’s website.