Ferrari has taken the roof off of its SF90 Stradale to create the all-new Spider variant, which delivers all of the power in a much more visceral environment. As the Prancing Horse’s first production plug-in hybrid spider, the SF90 Spider sets new performance and innovation benchmarks not only for the marque’s range, but for the entire sports car sector.

The new convertible has the same extreme supercar specification and record-breaking performance as the SF90 Stradale yet also adds further driving pleasure and versatility to the mix, thanks to latest iteration of Ferrari’s signature retractable hard top architecture. This makes the SF90 Spider the ideal car for owners that demand the very pinnacle of Ferrari technology, but still want the thrill of open-top driving. 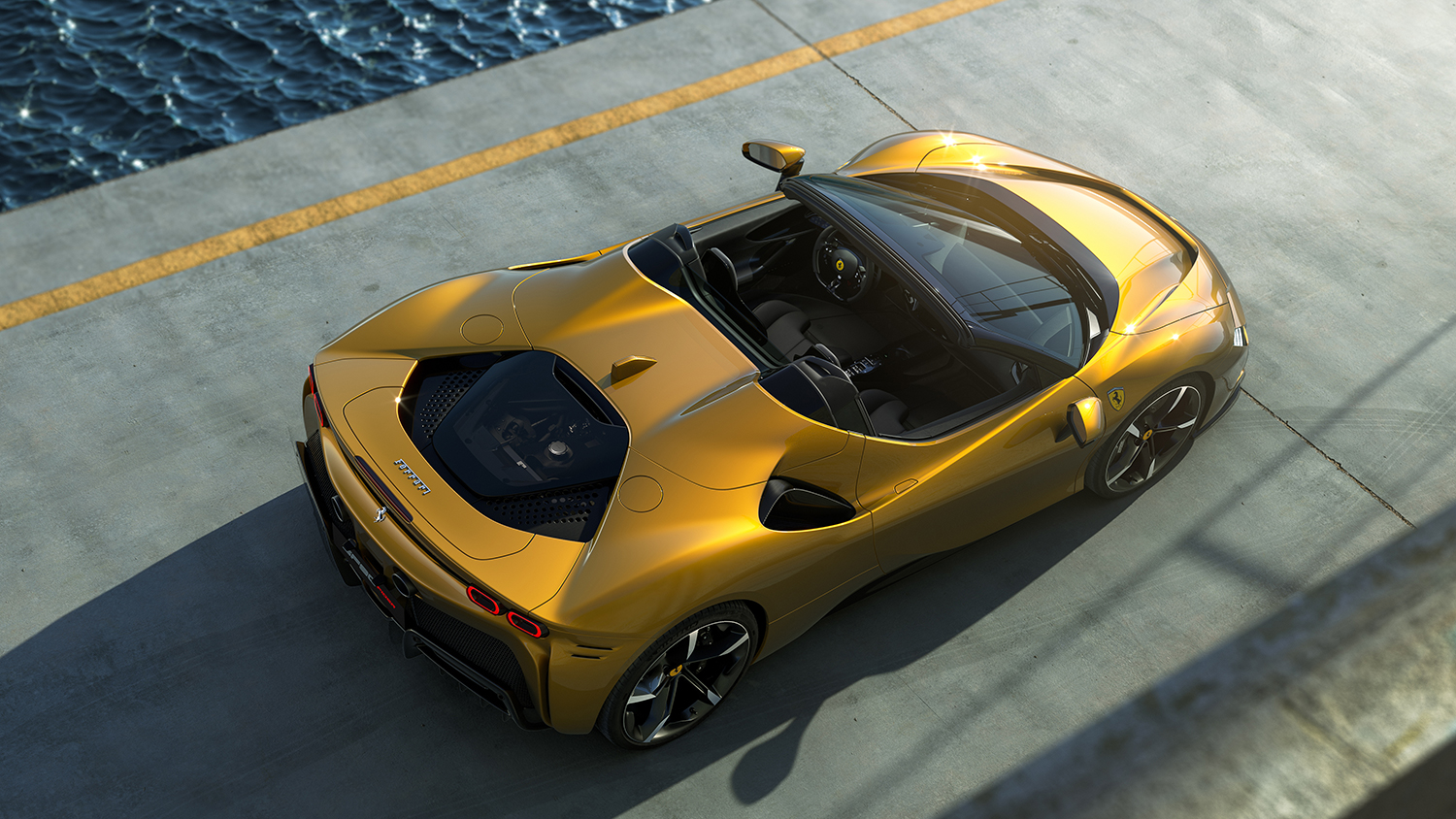 The retractable hard top (RHT) was again adopted because it guarantees optimal noise insulation and protection from the elements when raised, does not deform at high speeds and provides exceptional occupant space and comfort. The RHT is so compact, simple and light it can be actioned in just 14 seconds and can be deployed when the car is on the move. The key to the success of the Ferrari RHT, which premiered on the 458 Spider in 2011, and which has been constantly evolved in the intervening years, is that it takes up just 100 litres of space rather than the 150-200 litres required by a traditional system. The use of aluminium in its construction also means that it is around 40 kg lighter than a conventional retractable hard top. An adjustable electric rear window guarantees superb occupant comfort even at high speeds when the RHT is lowered. 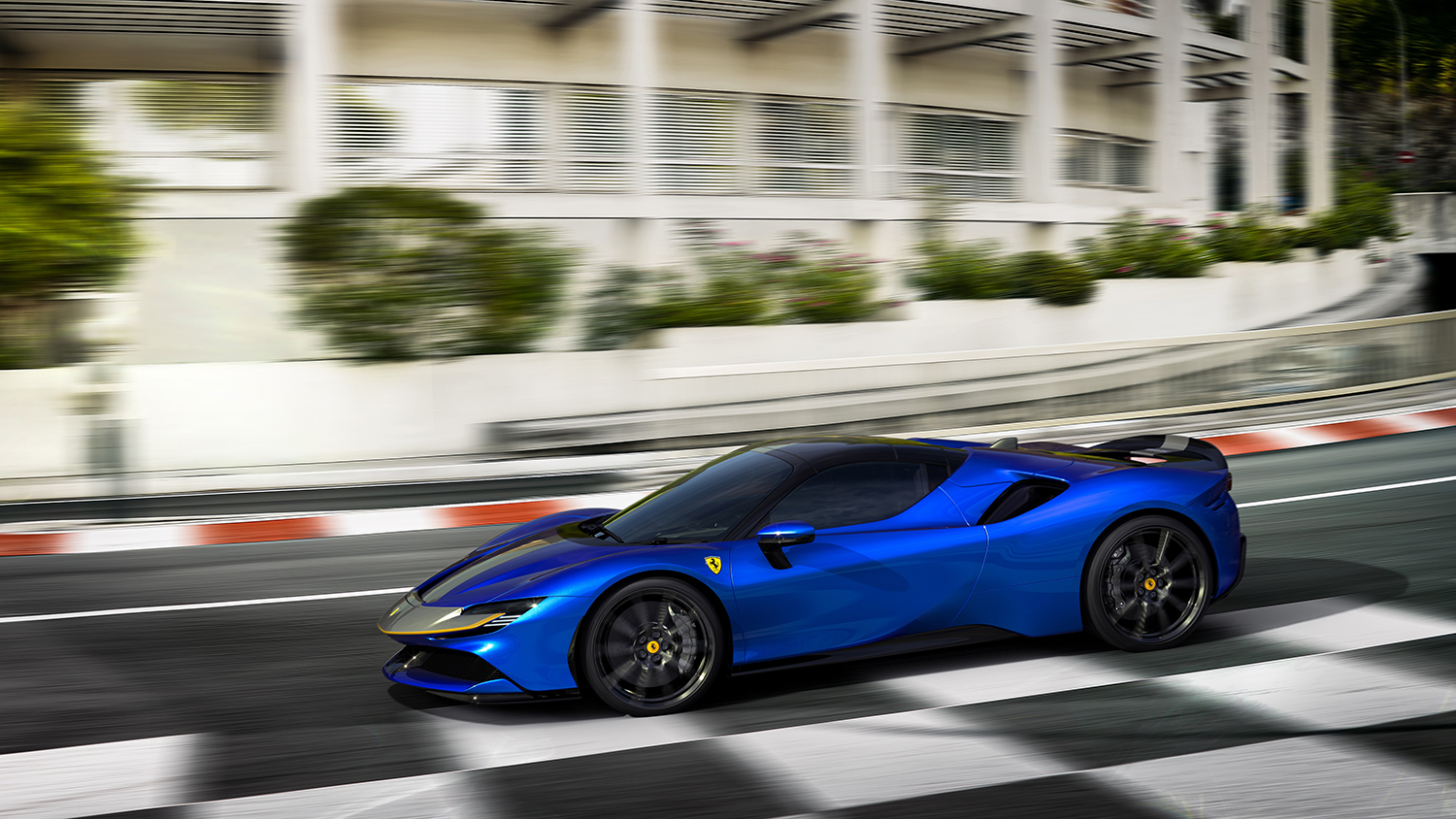 As is the case with the SF90 Stradale, the SF90 Spider is also available with an additional specification option for owners that want to push its track car vocation to the extreme. The Assetto Fiorano pack includes a list of exclusive upgrades that set it apart from the standard car, not least Multimatic shock absorbers derived from the Ferrari’s GT racing experience and optimised for track use. Others include the adoption of high performance materials (such as carbon-fibre and titanium) that have shaved 21 kg off the car’s weight, a carbon-fibre rear spoiler and road-homologated Michelin Pilot Sport Cup 2 tyres designed to improve track performance in the dry, thanks to a softer compound and fewer grooves. Lastly, the Assetto Fiorano offers an optional two-tone livery that further underscores the car’s racing vocation. 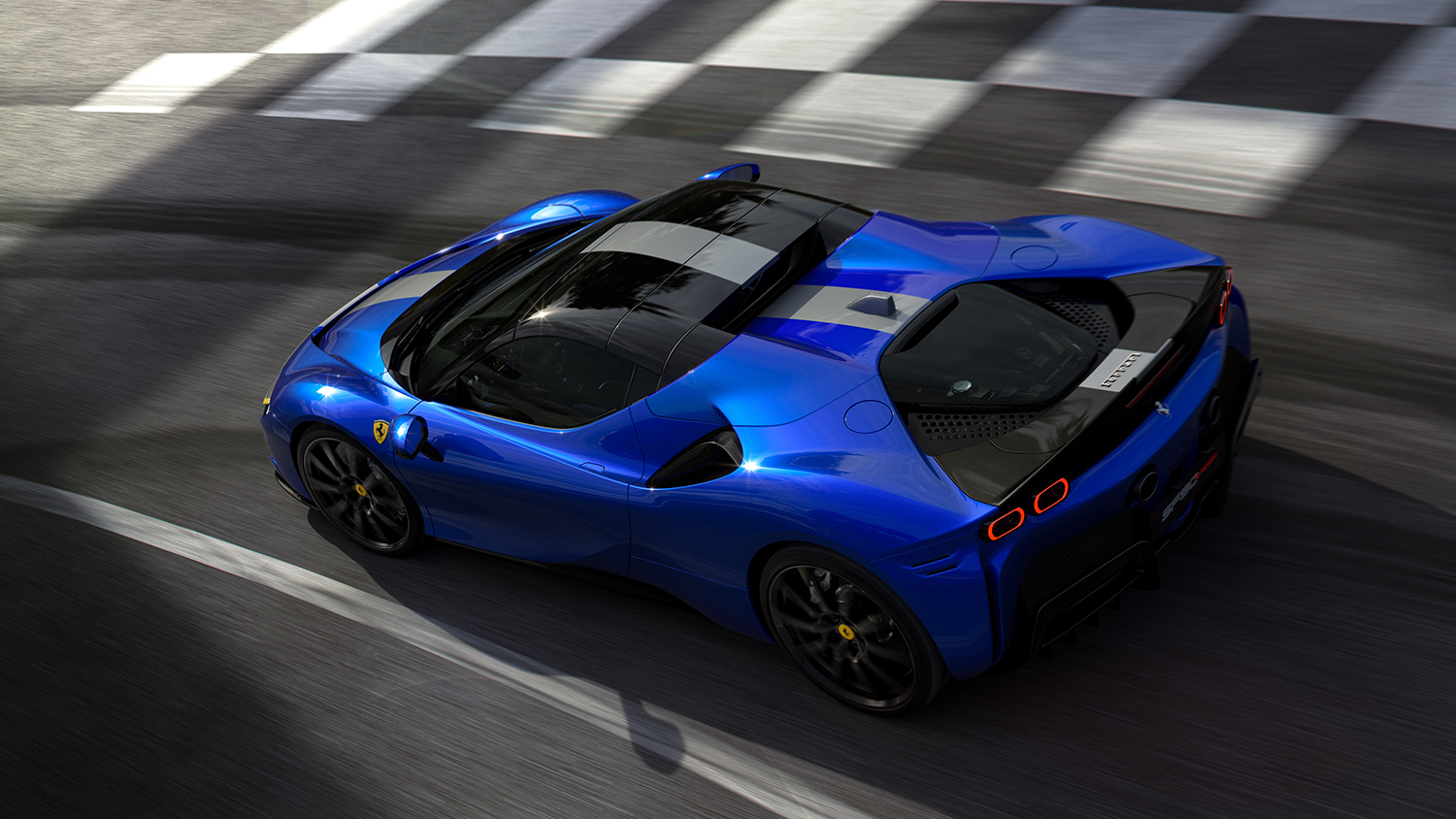 0-62 MPH is achieved in just 2.5 seconds and it will hit 124 MPH in 7 seconds, or 0.3 seconds slower than the fixed-roof SF90. The Spider will continue to hit its top speed of 211 MPH and will do so with ease thanks to a high-tech eight-speed dual-clutch automatic gearbox.

Furthermore, as this car is a PHEV it will also run exclusively on its electric motors if you so wish. For example, if you’re dawdling around a city, you’ll be provided with around 16 miles of range from its 7.9kWh batteries that will power the front wheels only, all while limiting speeds to 84 MPH. 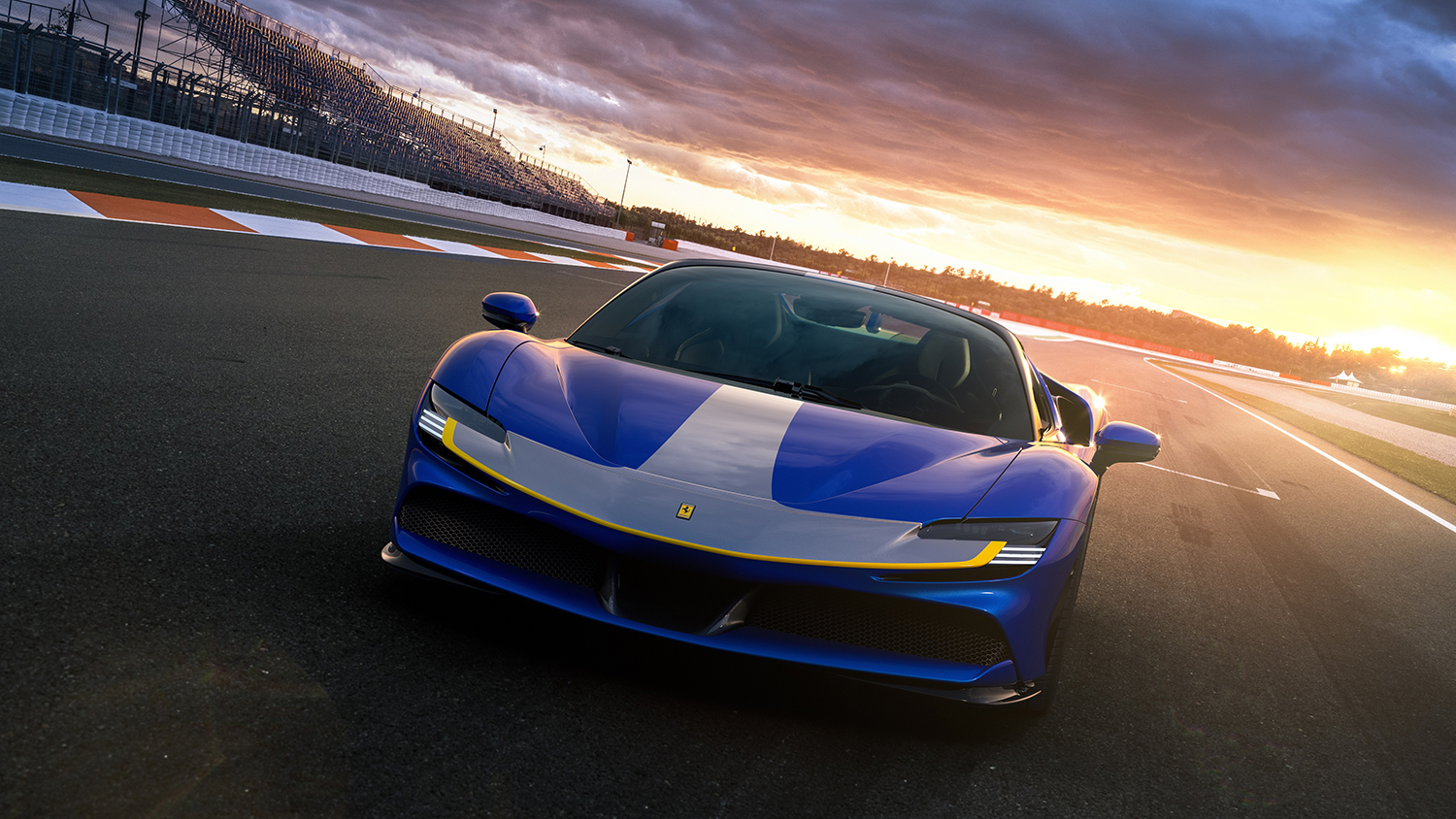 When the RHT is deployed, the sides, front and tail of the SF90 Spider have the same distinctive styling as the SF90Stradale. This is no small achievement given that the architecture incorporates stowage for the RHT, which is moved by a complex lever system, but also that it was vital to maintain the same chassis rigidity levels. This was achieved by re-sculpting the car’s surfaces so that the tonneau cover seamlessly integrates with the B-pillars of the coupé, preserving the original styling theme. Even the buttresses behind the passengers’ head rests, which are a signature of all Ferrari spiders, integrate harmoniously as if they were emerging from a structure beneath the car’s skin. 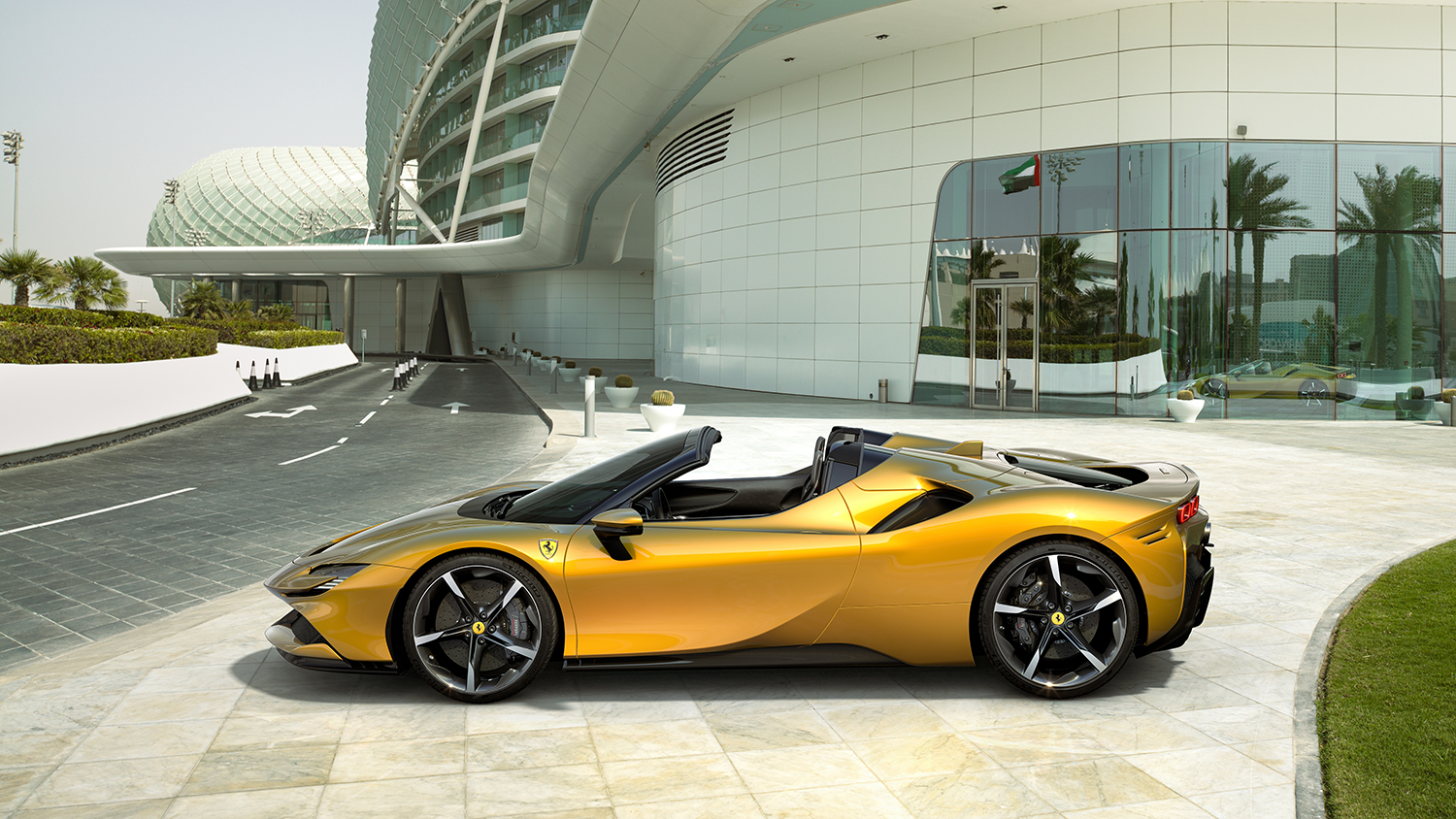 The result is that the proportions of the SF90 Stradale transfer easily to the SF90 Spider even when the RHT is stowed and without any formal concessions. This is even more surprising given that the engine is just as visible through the rear window despite the bulk of the roof. As the jewel in the car’s crown, the V8 is clearly visible both when the RHT is deployed and retracted. Seen from above, it is clear that the buttresses also line up with the seats, which improves rear visibility when the RHT is stowed, in addition to further underscoring the car’s two-seater configuration.

The greenhouse area and roof feature stylistic solutions from the coupé that reduce drag and underscore its fiery temperament without impacting on on-board comfort. The cockpit has been shifted forwards, the roof is 20 mm lower, the A-posts are more slender and the windscreen is more raked. 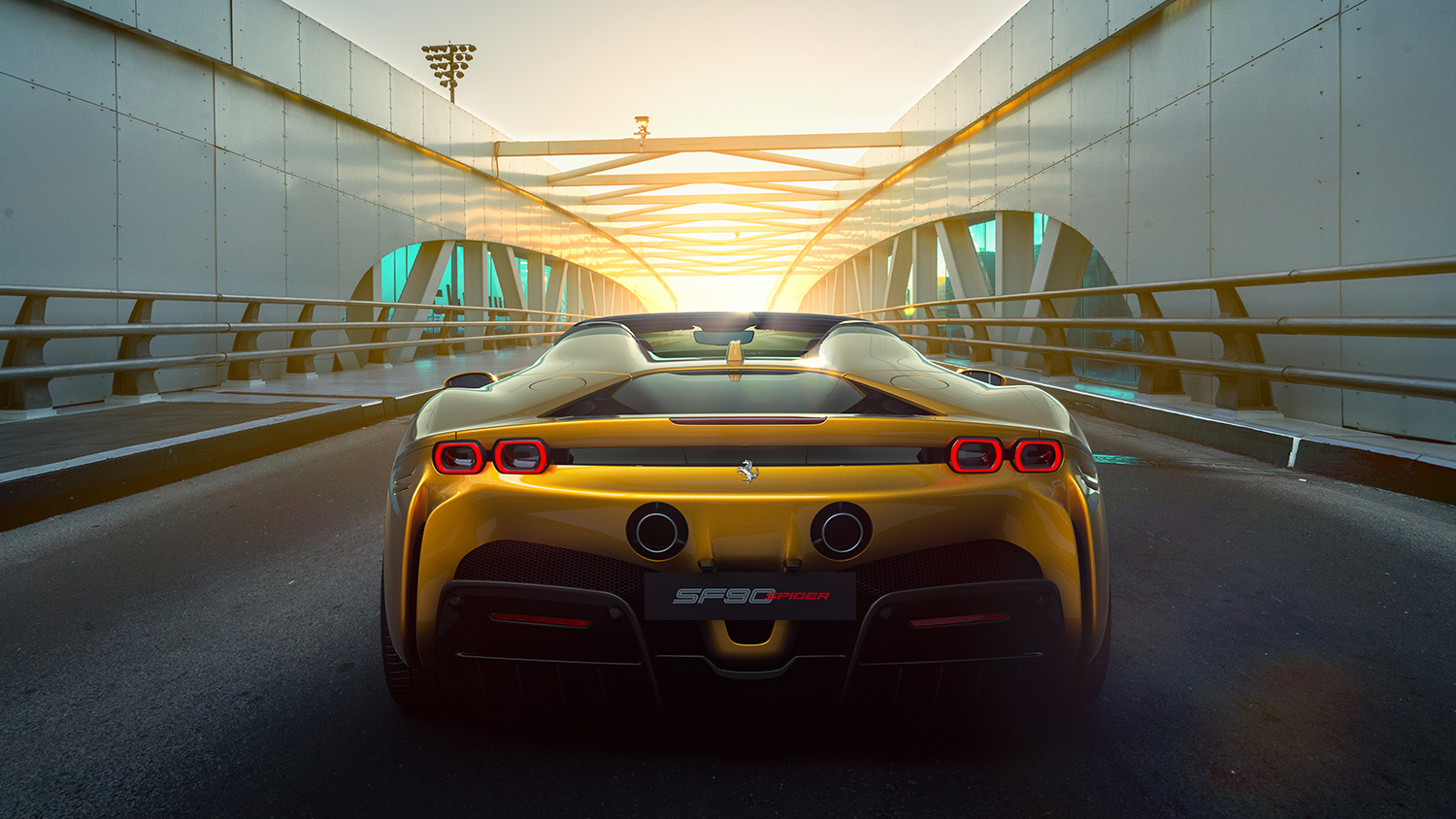 Aside from having the same silhouette as the SF90 Stradale, the SF90 Spider has a unique dynamic allure when its top is down: the absence of the roof seems to visually lower the car’s centre of gravity, an impression further strengthened by the difference in colour of the trim on the roll-hoops that give rise to the buttresses.

The front of the car is dominated by a very pronounced profile which underscores its extremely aggressive character. The three air intakes in this area cool the electric motors (front) and the internal combustion engine (sides). The SF90 Spider also uses matrix LED headlight technology to improve visibility in all driving conditions thanks to active beam control.

The rear of the car is dominated by high exhaust pipes, which are the result of optimisation of the exhaust line layout. Their competition car vibe has been cleverly exploited to underscore the SF90 Spider’s track-inspired personality. This effect is further enhanced by the low tail area. More elongated luminous rings create a more horizontal perception of the tail lights, which are a radical break from the iconic round shape normally used on Ferrari’s mid-rear-engined berlinettas. 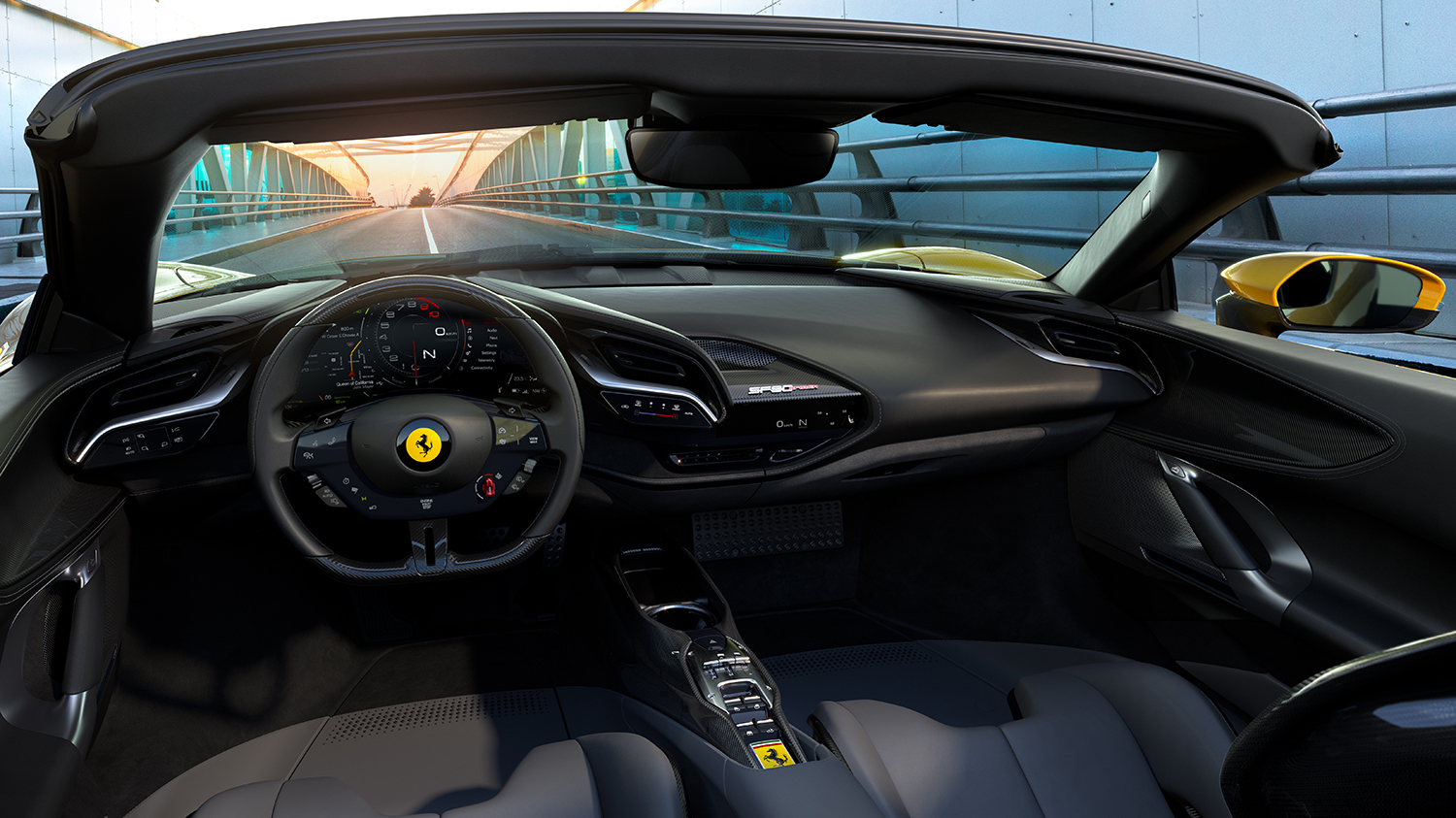 The look and feel of the cabin was driven in large part by the complete redesign of the HMI, which marked such a major leap forward on the SF90 Stradale. The instrumentation is now predominantly digital with all the screens going completely black when the car is not running, lending the cabin a very minimalist look. However, once the Engine Start button on the steering wheel is pushed, a “ceremony” of sorts begins that sees all the digital components in the driver cockpit gradually springing to life until the whole cockpit is aglow. 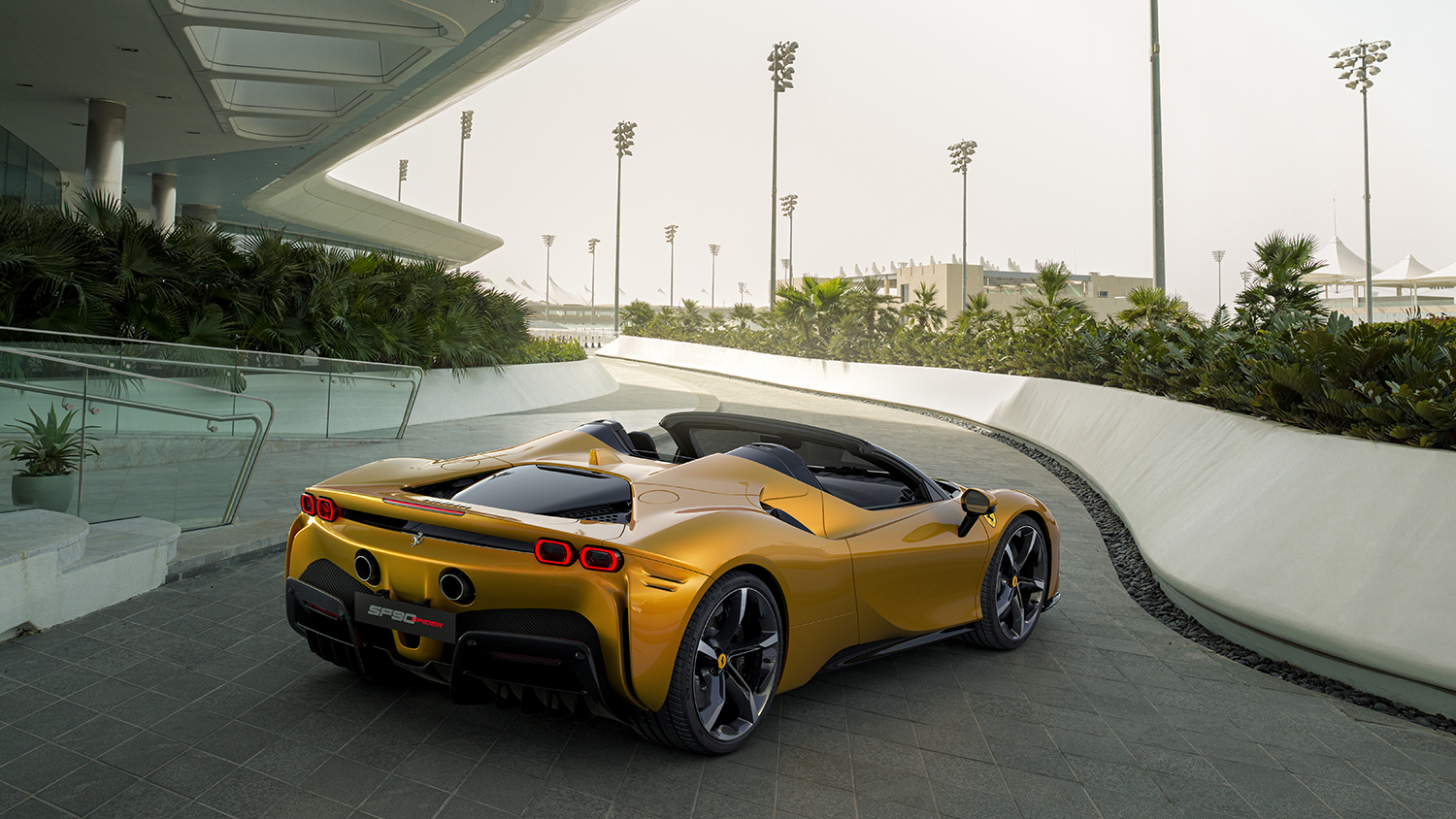 The central instrument cluster comprises a single 16” HD screen, which is curved towards the driver to make it easier to read and emphasise the wraparound cockpit effect. In the default screen, everything is dominated by a large circular rev counter, framed by the battery charge indicator. The navigation screen is on one side of the rev counter with the audio controls on the other. The screen’s large dimensions mean that there is huge flexibility in terms of personalising the displays, which are also very easy to navigate using the steering wheel controls. It is, for example, possible to select a full-screen version of the navigation map.

Thanks to the introduction of the head-up display, the main information can be projected onto the section of windscreen within the driver’s field of vision. This means less distraction in line with the “Eyes on the road, hands on the wheel” philosophy that has always driven the development of the HMI used on every Ferrari Formula 1 car and that has gradually been transferred to our road-going sports cars. 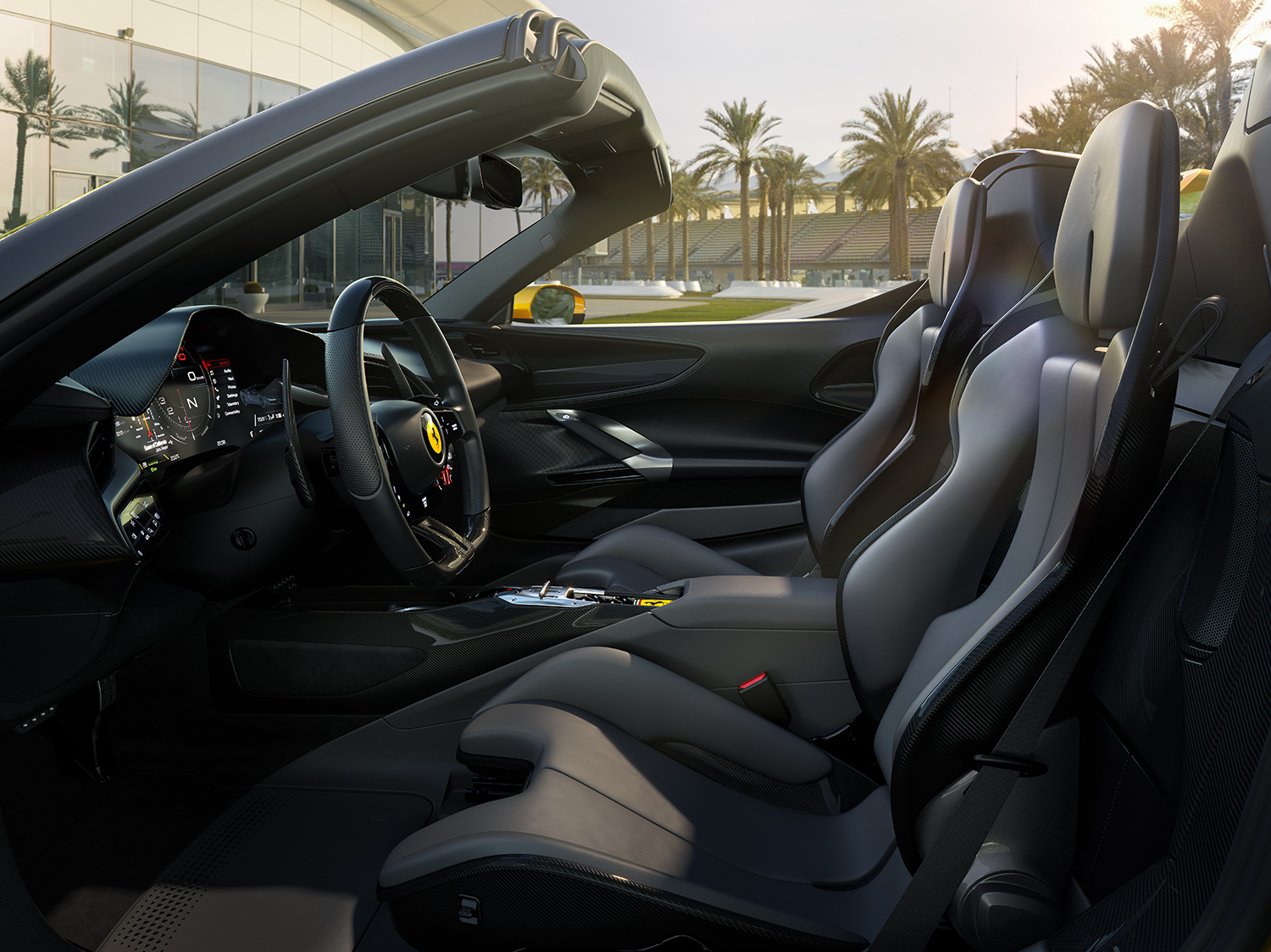 The SF90 Spider’s steering wheel completes that transfer process from the competition world and also ushers in a new era by introducing a series of touch commands that allow the driver to control virtually every aspect of the car without ever taking their hands off the wheel. The traditional controls include the now iconic Manettino, steering-wheel mounted headlight control, windscreen wipers, indicators. Of the new touch controls, the pad on the right-hand spoke allows the driver to navigate the central cluster screens, while voice and cruise controls are on the left-hand spoke. In the bottom left section of the central area, there are four buttons the driver uses to select the power unit mode.

The F1 bridge, a signature on the previous models, has now disappeared from the central tunnel and been replaced by a modern take on the gearshift gate, an iconic feature of Ferrari’s manual gearboxes. In the new gate, however, the gearshift grille is digital as befits an automatic transmission. At the bottom of the tunnel is the compartment for stowing the new ignition key, which is an exact replica of the Ferrari Prancing Horse badge found on the bonnet, adding an authentic finishing touch to the cabin’s styling. The key works in full keyless mode so that the driver can not only start the ignition but also open the doors without taking it out of their pocket.