Porsche has just unveiled its first 992-generation model of the world’s top-selling race car with its new 911 GT3 Cup. The new GT3 Cup carries the same 4.0-liter six-cylinder horizontally opposed engine but tuned to pump out 510 horsepower, 25 more than its predecessor. Aside from just pure power, the new engine also allows teams to use more sustainable synthetic fuels, paving the way for less carbon emissions in the future.

The new racer also gets a range of aerodynamic upgrades and increased mechanical grip. Using a wider 911 Turbo body, the new GT3 Cup has both a wider rear and front axle, and uses 12-inch rims up front and 13-inch rims at the rear to maximize both drivability and handling. 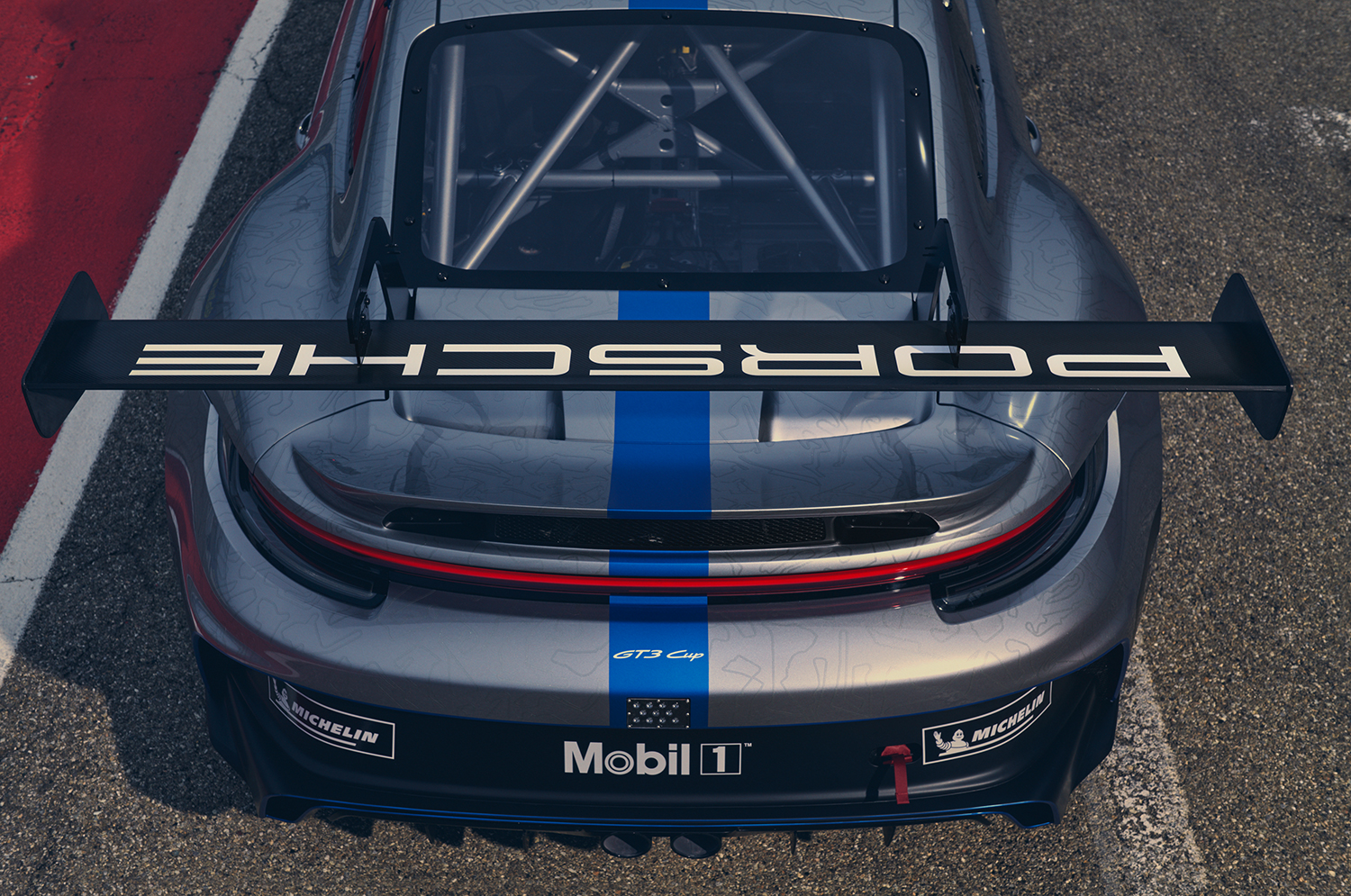 “We wanted to position the new 911 GT3 Cup even more as a professional racing car, while also making it more cost-effective for the teams to run,” explains Jan Feldmann, the new car’s project manager. “We were particularly successful in achieving this thanks to its striking appearance, the improved suspension and intelligent solutions for electrical details. The handling of the new 911 GT3 Cup is noticeably more precise and even more fun. With its improved performance and the optimised cockpit, it’s the best Cup car that Porsche has ever built.” 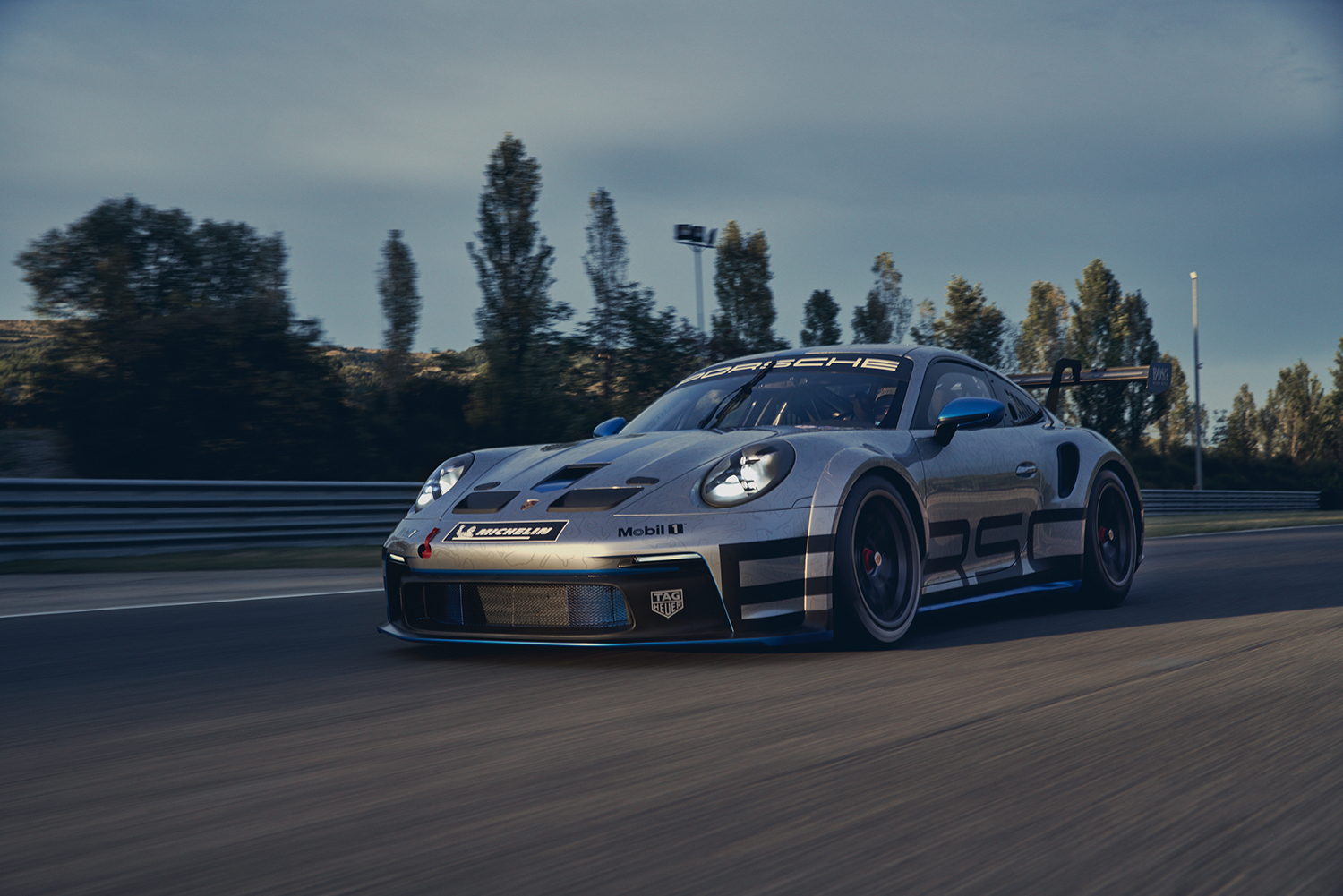 One of the most striking features of the new 911 GT3 Cup is its optimised aerodynamics and the overall more muscular appearance – it looks even more impressive at first glance. This is partly thanks to the wide turbo-spec lightweight body that is being used for the first time in the Cup car. Measuring a total of 1,902 millimetres in width, it exceeds the rear width of the previous model by 28 millimetres and is distinguished by its additional cooling air inlets in front of the wheels. Furthermore, the front axle of the 992 generation of the 911 is also significantly broader. Thanks to additional flared fenders, the new 911 GT3 Cup now measures as much as 1,920 millimetres at the front axle. This opens the door for a harmonious wheel-tyre combination with 12-inch wide rims on the front and 13-inch wheels at the rear axle. This is typical for GT racing and has a positive effect on the handling and driveability of the racing car. 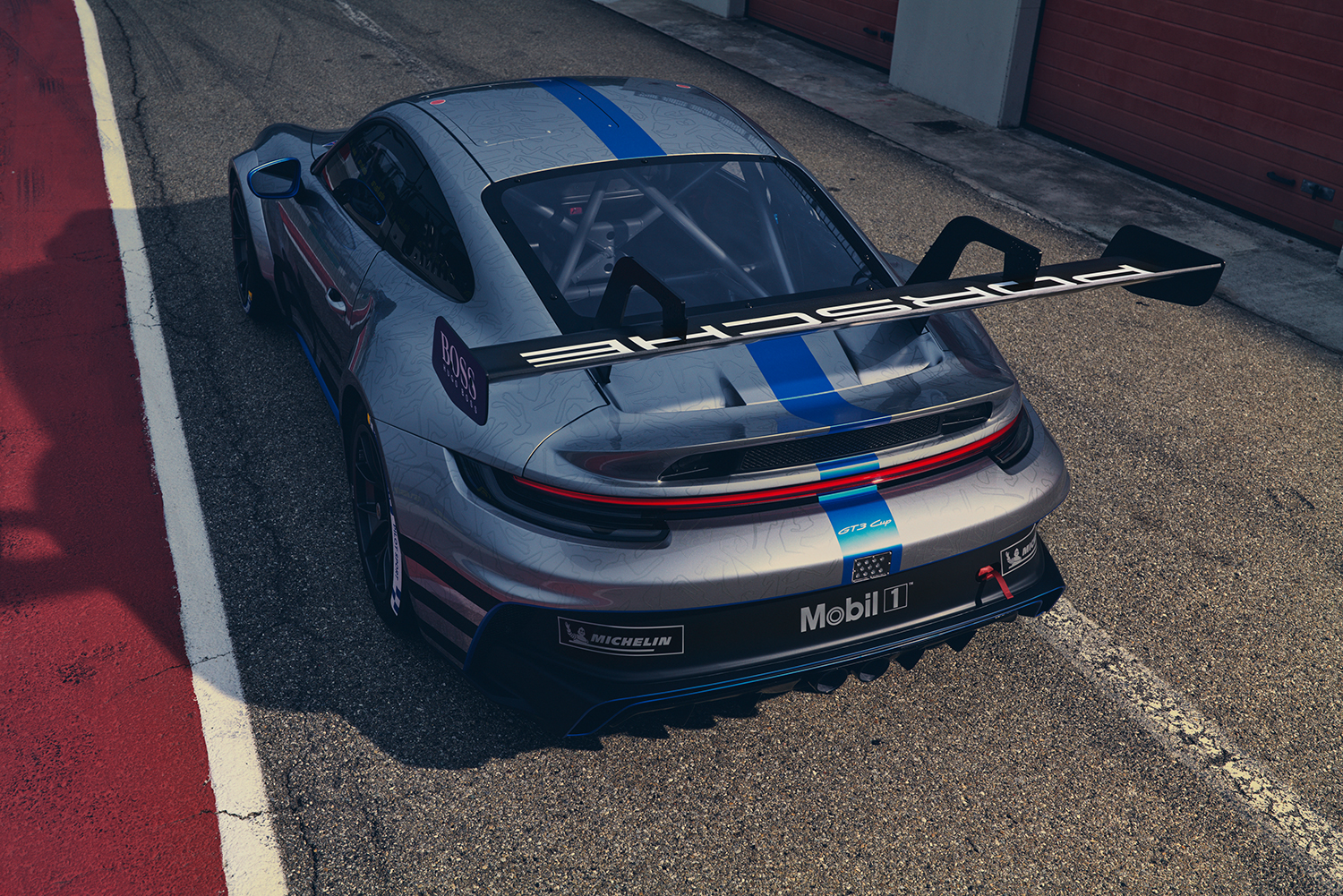 At the same time, the seventh generation of the Cup racer generates noticeably more aerodynamic downforce. This is thanks to the combination of the rear spoiler with the larger rear wing and front apron, which was specifically adapted to racing by means of a front lip spoiler and strategically-positioned separation edges. The eleven-stage adjustable rear wing with a ‘swan neck’ mounting ensures uninterrupted under-wing airflow. This improved aerodynamic efficiency also ensures more stable handling, especially in fast corners. 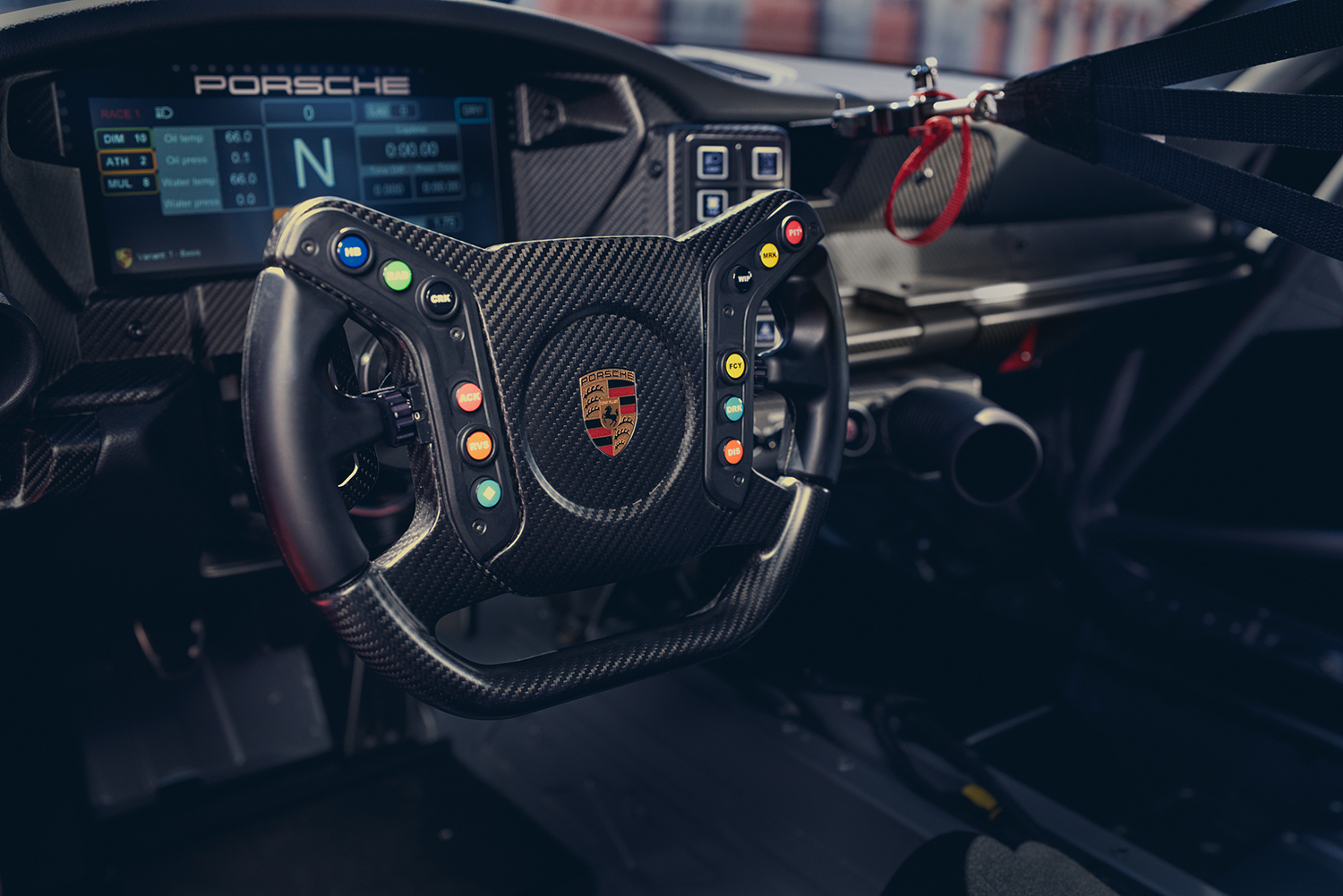 The redesigned, open-top, motorsport multifunction steering wheel made of carbon-fibre is yet another development adopted from the 911 GT3 R. Following drivers’ feedback, its illuminated buttons have been rearranged. The so-called Rubber Switch Panel (RSP) with its ten large buttons on the right is reminiscent of a control element in the Porsche 919 Hybrid. These buttons are easy to use, even in the heat of the race and are given designated central functions such as lighting and ventilation or to change tyre settings from dry to wet tyres. 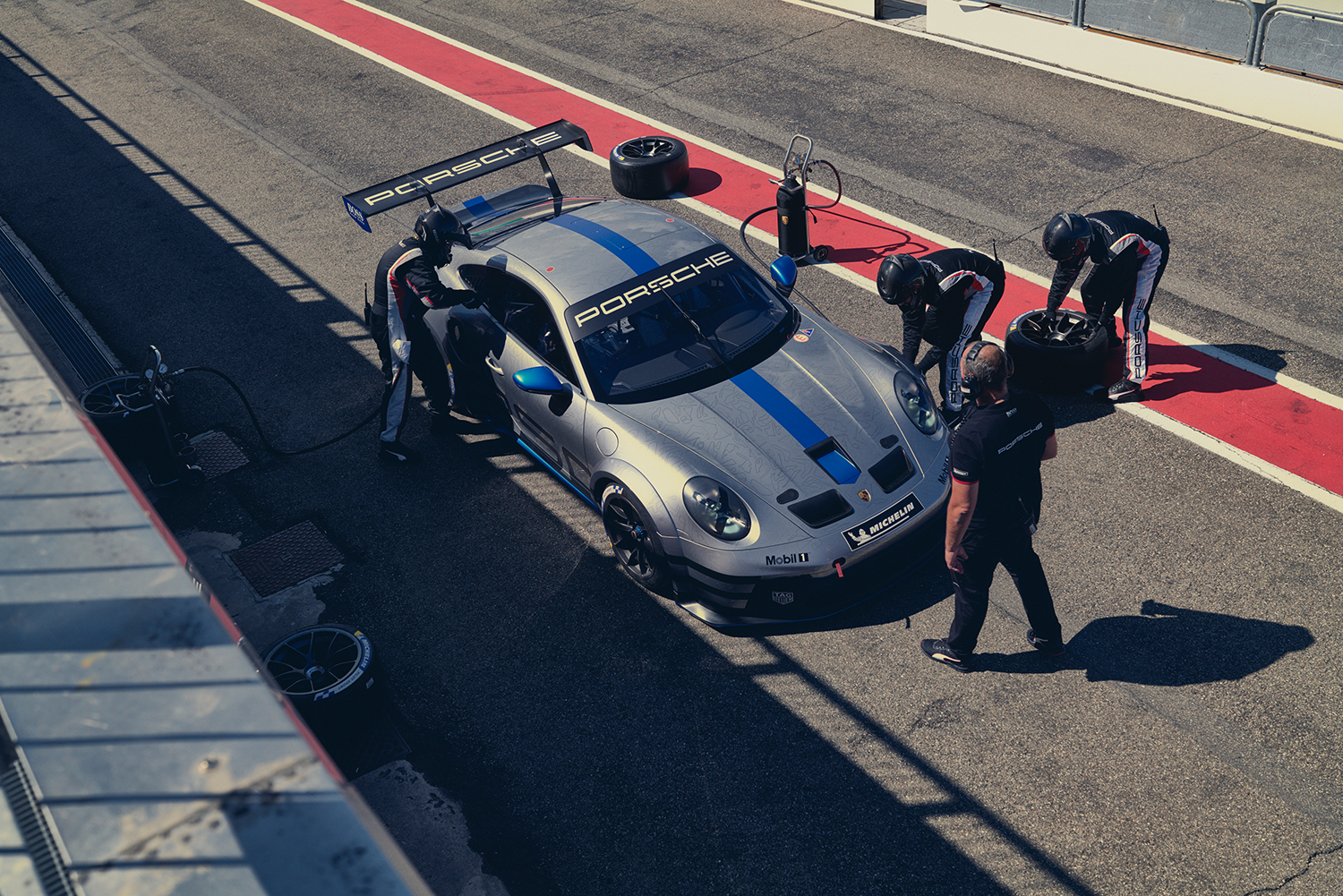 The designers have also revamped the centrally-positioned, 10.3-inch colour monitor. The screen prioritises the display of key data and information for the driver while racing. Displayed alongside the engine revs are water and oil temperatures, the gear currently engaged and error messages or information on important baseline settings, such as “wet” for racing in rain. After the readout of the data, the design of both the display and the computer monitors are aligned so that the driver and race engineer see the same information. This helps with analyses after each session.

Porsche will begin delivering the new 911 GT3 Cup to teams in February 2021, with the car scheduled to partake in the Porsche Mobil 1 Supercup and the national Porsche Carrera Cups in Germany, France, Asia and Benelux, and North America.