MINI has teamed up with British fashion icon Paul Smith to create a one-off model with an approach to reduction. Guided by the overarching theme of ‘Simplicity, Transparency, Sustainability’, the car showcases inspirational ideas for a more sustainable method of automotive design. As the name suggests, the process began by completely stripping down a three-door MINI Cooper SE and reducing it to its structural essence. Only those elements that the designer viewed as absolutely necessary were then defined, implemented and put in place – with sustainability taking a front seat. 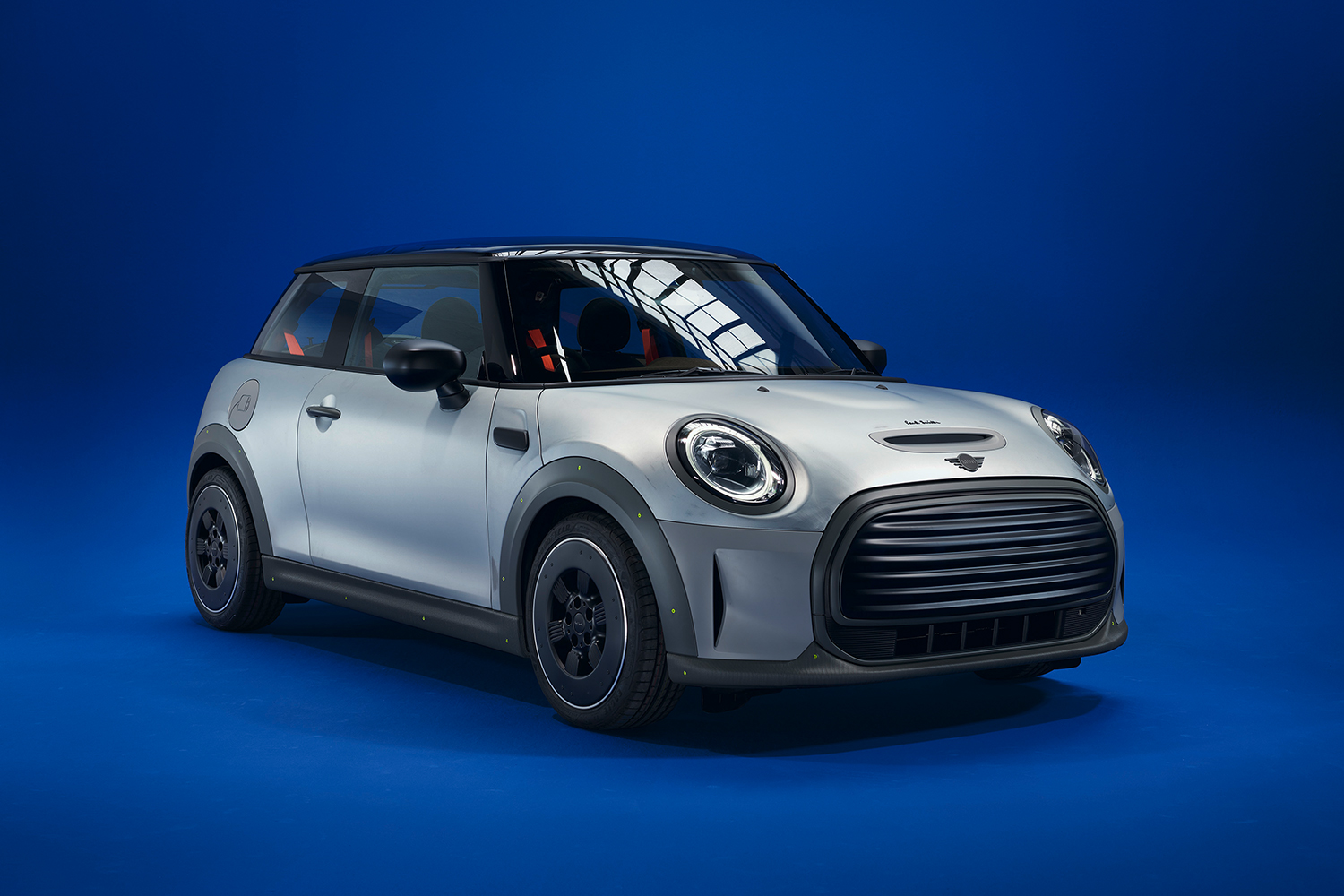 The jointly-led process applied the principle of maximum reduction to produce a minimalist, high-class design with a fresh and unconventional appeal. Numerous clever touches endow the exterior of the three-door MINI Cooper SE with a totally unique aesthetic. Raw materials are a very deliberate part of the exterior design. This meant the body was left in its unfinished state with no coloured paint applied, but instead just a thin film of transparent paint to protect against corrosion. Grinding marks from the factory have been consciously left intact on the galvanised steel panels to clearly identify the car as a functional object and robust companion for everyday life. This intentionally rough-hewn effect was also dubbed “the perfect imperfection” by Paul Smith. 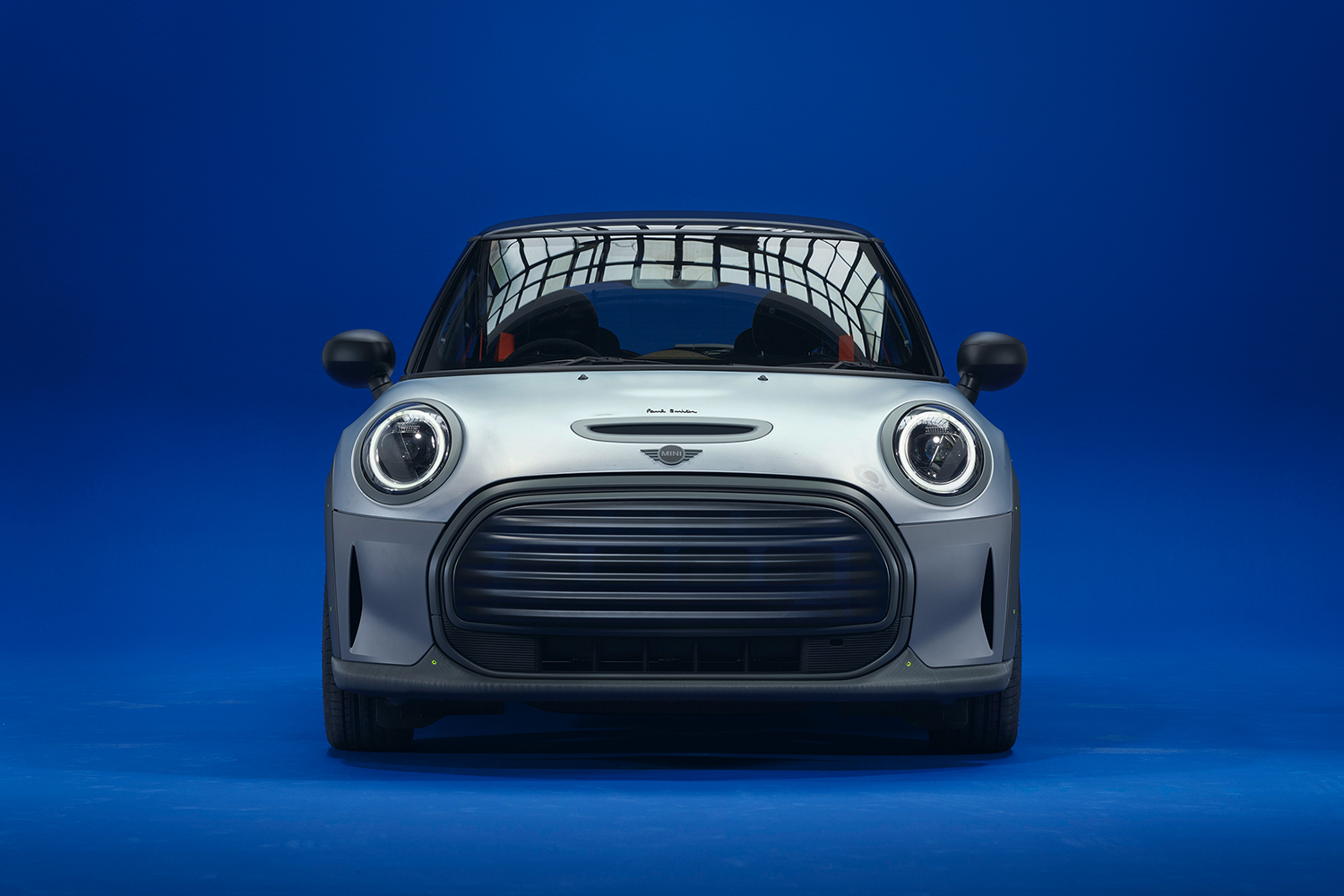 Sections of the familiar MINI black band are 3D-printed from recycled plastic and their basic material qualities have been left exposed, like the metal panels. Bicycle enthusiast Smith – who enjoys rolling up his sleeves occasionally and replacing or modifying individual parts of his road bikes himself – provided the inspiration for the visible screws in the add-on parts, which show how simple dismantling would be and how easily the vehicle could be reincorporated into the raw-material cycle at the end of its service life. The functional and distinctive front and rear apron inserts were likewise manufactured in a 3D printing process, which produced their striking texture. 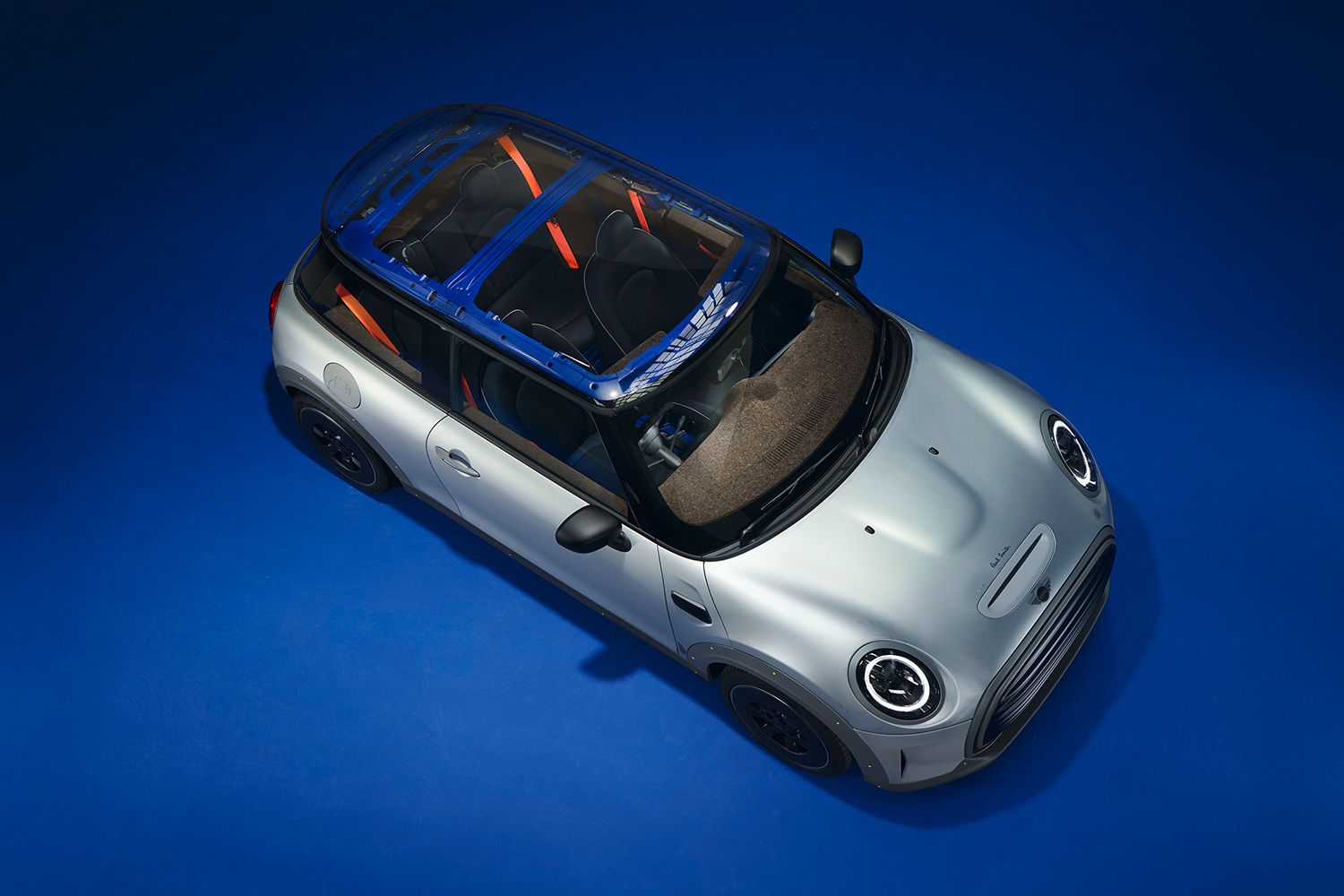 The blanked-off radiator grille of the MINI STRIP and its wheel covers help to reduce drag in hallmark electric car fashion, thereby increasing its theoretical range. The grille trim and aerodynamic covers on the wheels are made from recycled Perspex, saving both weight and resources. Recycled Perspex was also used for the large panoramic roof that allows curious eyes to view the largely bare structure of the bodyshell inside. 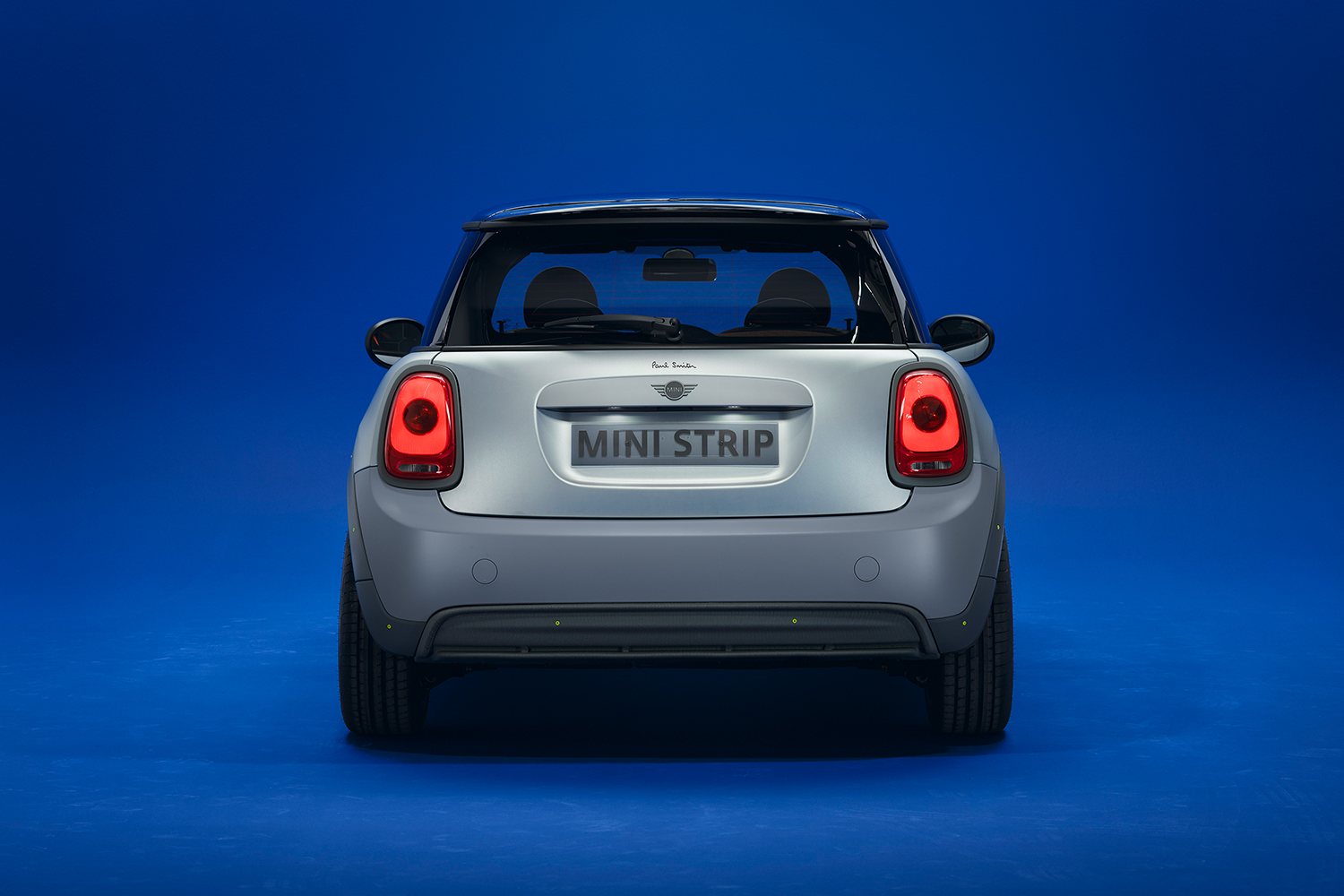 MINI calls it a ‘twinkle in the eye’, Paul Smith a ‘classic with a twist’ – both refer to unexpected details such as high-contrast colour accents that are only revealed through the designers’ work at second or third glance, betraying their fondness for details. The same is true of the MINI STRIP: Opening the doors reveals the signature Paul Smith stripes in a vivid composition of five colours. The charging flap adds a splash of neon green when opened, while the engraved drawing of an electric plug on the flap is Paul Smith’s own work. 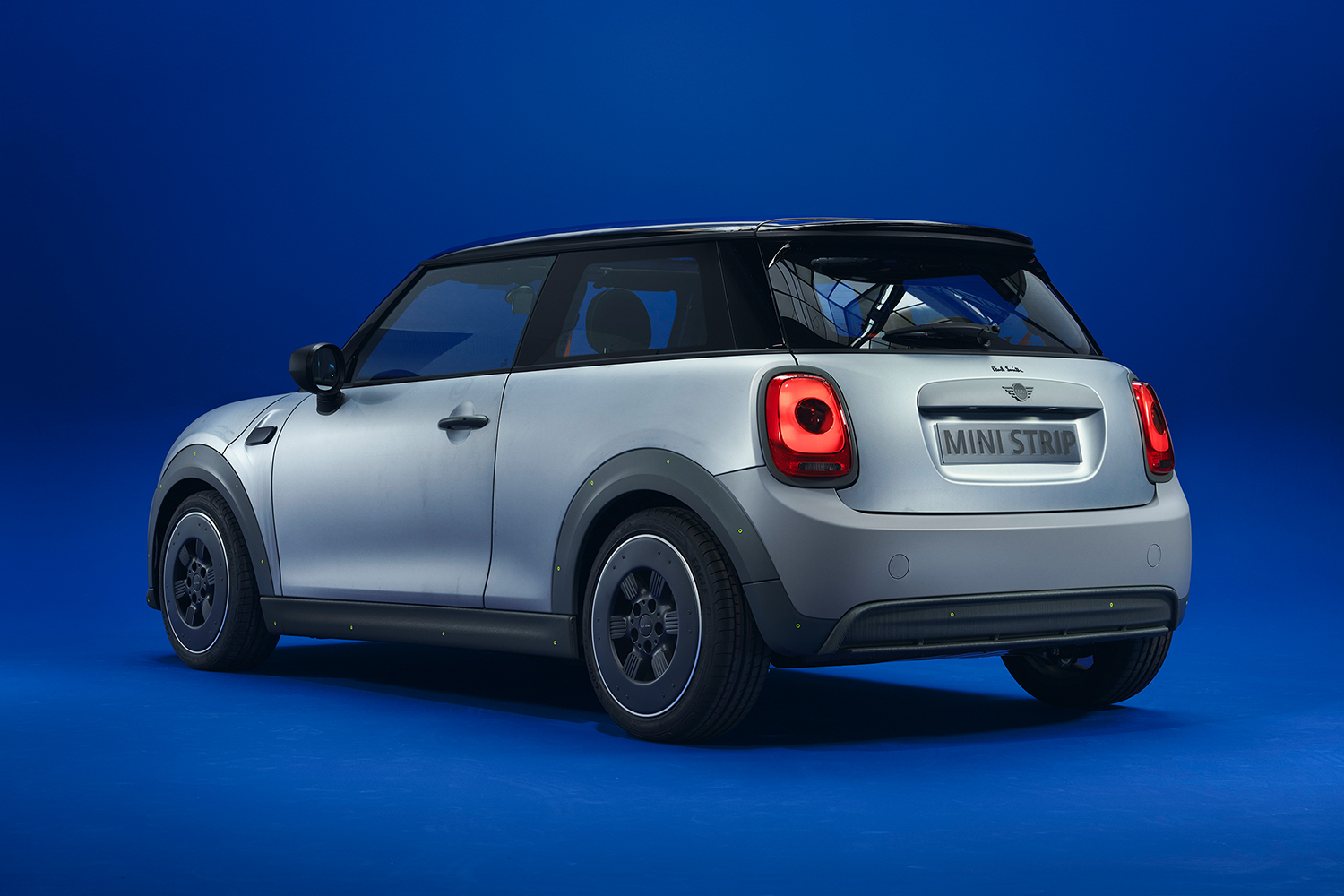 The MINI STRIP holds true to the motto of ‘Simplicity and Transparency’ on the inside, too, courtesy of some radical stripping-back. All trim parts have been purposefully omitted (with the exception of the dashboard, topper pad and parcel shelf), turning the bodyshell into the dominant visual feature of the cabin. It has been coloured blue at the explicit request of Paul Smith, producing a particularly eye-catching effect. The exposed basic material and intense blue tone give the interior an aesthetic appeal all of its own; it is bare yet feels “dressed” at the same time. 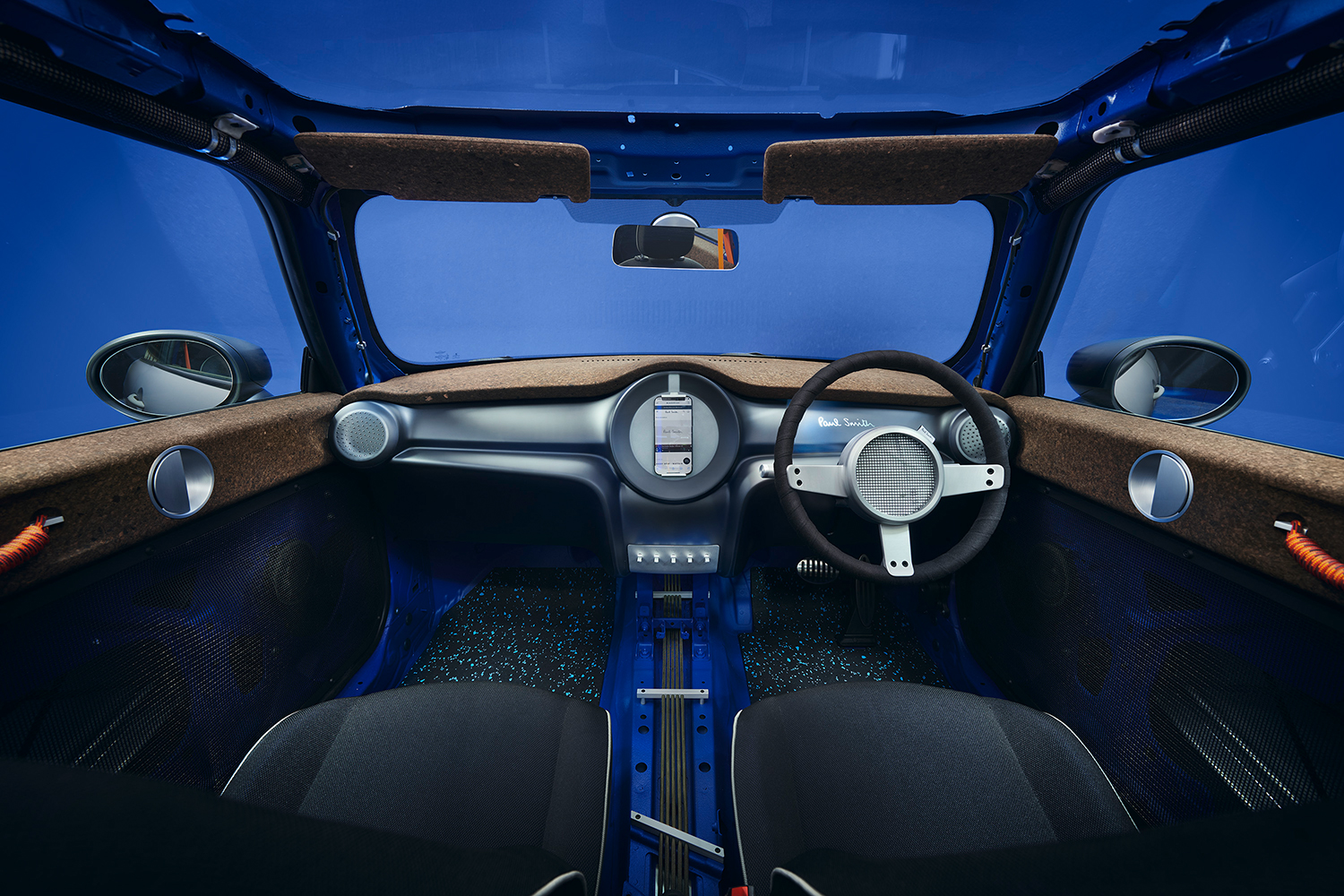 Instead of the usual multi-part design, the dashboard consists solely of a large, semi-transparent section with a smoked-glass finish. Taking its cue from MINI design’s traditional use of circular elements, the geometry has been greatly simplified with a far more graphical interpretation. There is no classical centre instrument, leaving the driver’s smartphone to take centre stage instead. It is placed where the centre display would normally be, connects automatically to the car and, in so doing, becomes the media control centre. The only physical controls in the interior are located lower down in the centre stack, where the toggle switches for the power windows and the start/stop function can be found. 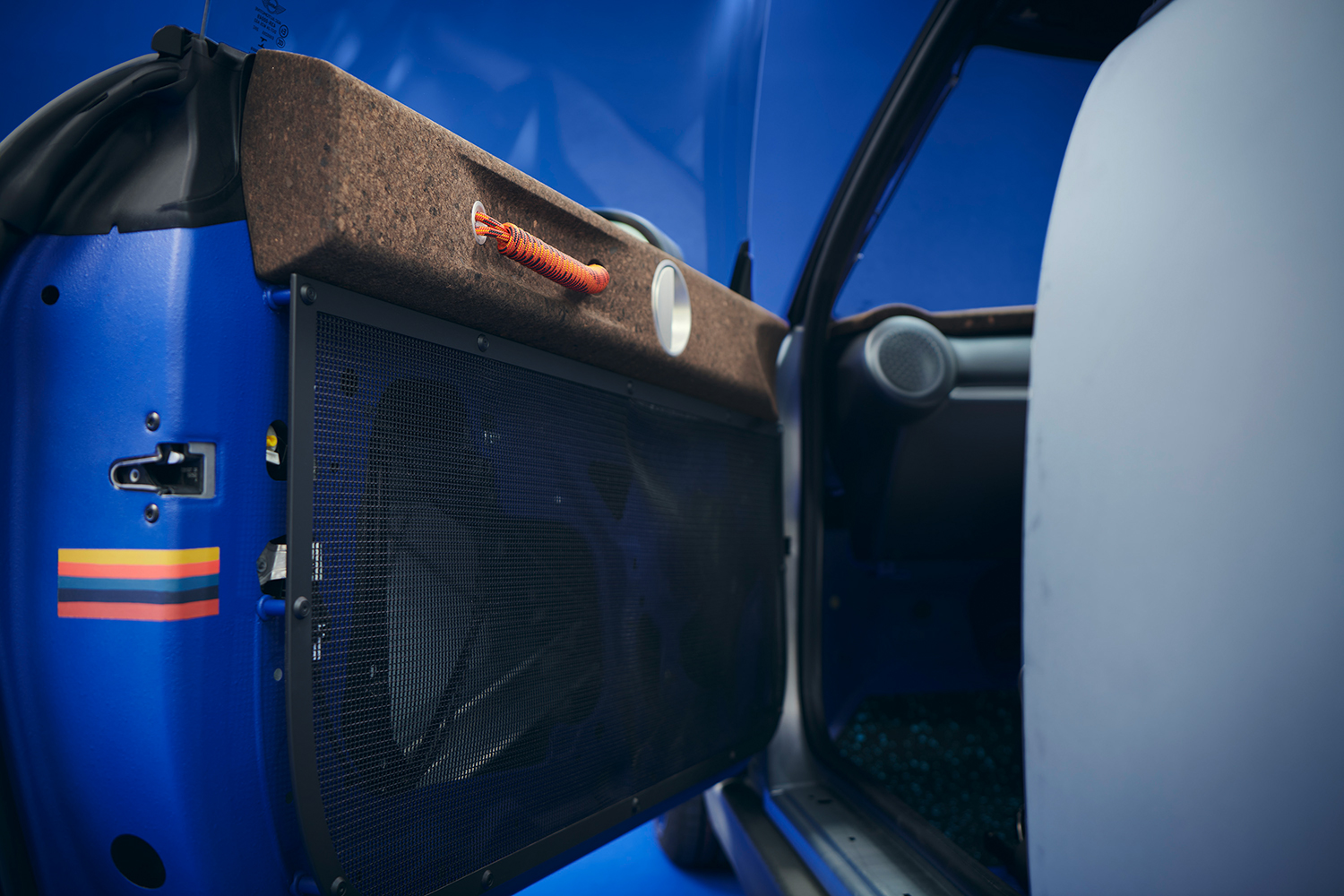 Alongside the minimalist geometric design inside the MINI STRIP, the use of recycled, environment-friendly materials also underpins the car’s sustainability credentials. The interior is completely free of both leather and chrome, with seats upholstered in a knitted fabric. The completely mono-material design for the seat coverings means they are fully recyclable, including the piping, allowing material circularity to be maintained. The floor mats are made from recycled rubber. Their terrazzo-like pattern is a by-product of the recycling and manufacturing process and positively showcases the multi-coloured constituent elements enjoying a second life as part of this material. 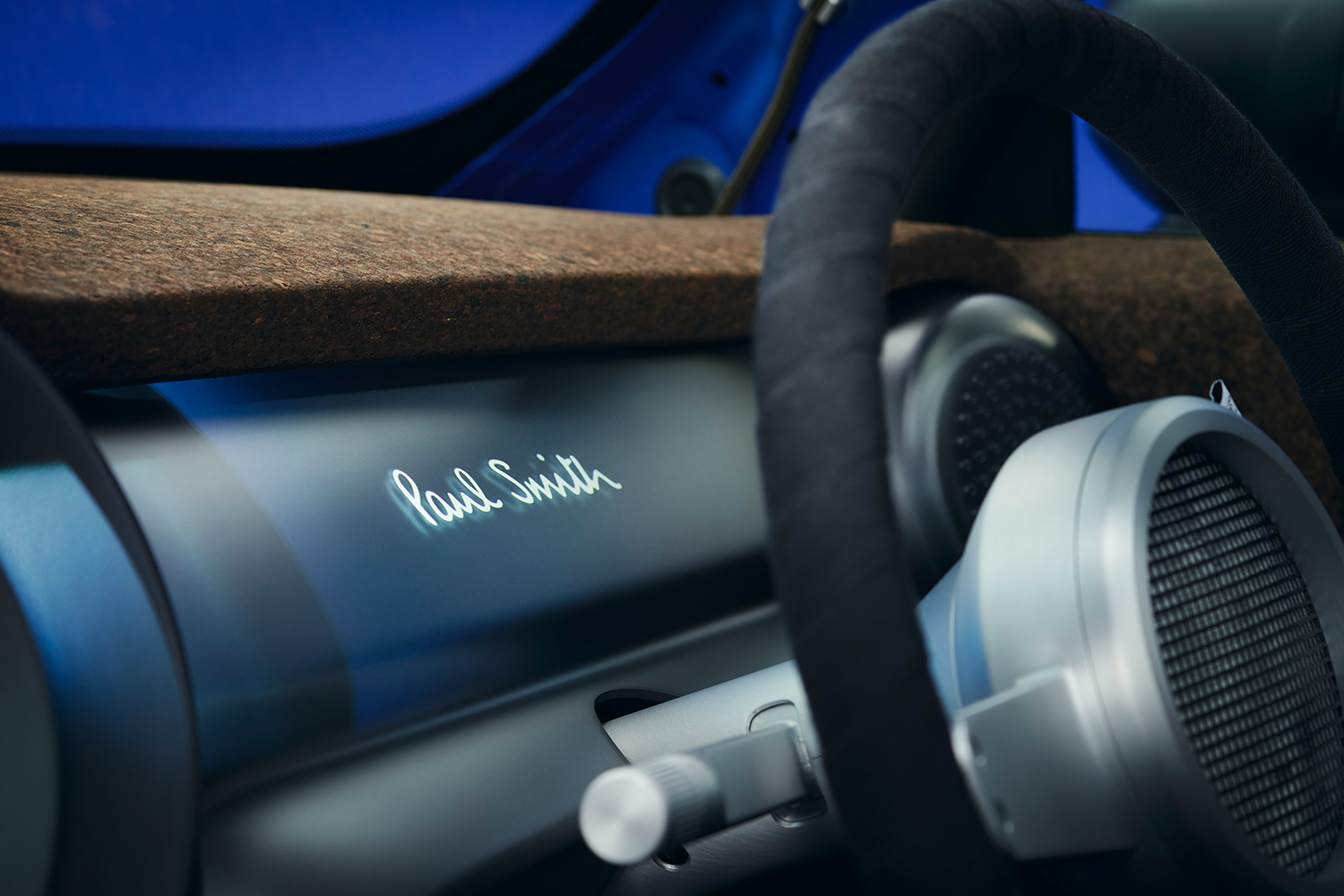 The dashboard topper pad, door shoulders and parcel shelf also display a highly simplified geometry and are made from recycled cork. The type of cork used here doesn’t contain any synthetic binding agents and is also fully recyclable. With its pleasing firmness combined with a soft feel, cork could provide a substitute for foamed plastics in future. Due to cork’s recyclability and its status as a renewable raw material that actually “fixes” carbon dioxide during its production, there is potential here for reducing greenhouse gases. Another positive side effect of knitted fabric and cork is that they are both open-pore materials that enhance interior acoustics.

The steering wheel, which is also a focal point of the interior, has been reduced to the most essential functions. Its rim has been wrapped in handlebar tape in true road bike style. Three aluminium spokes connect the rim to the steering wheel’s impact absorber, whose mesh covering makes it possible to see the airbag behind. As on the outside of the car, there are visible screws here showing how easy it would be to dismantle the steering wheel at a later date and reuse the aluminium. A small fabric Paul Smith label in the one o’clock position is one of the pointers to the collaboration that can be found in the interior. 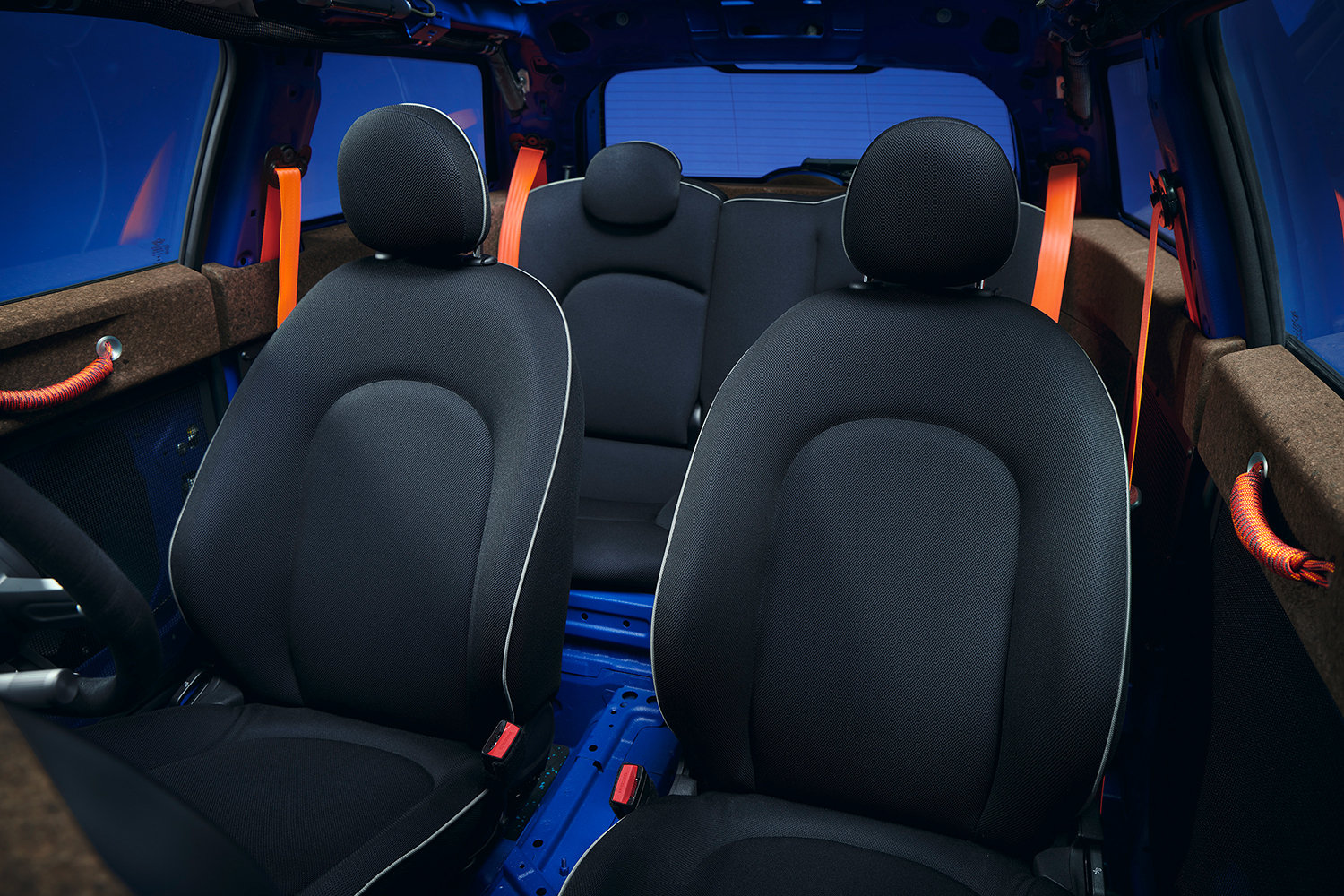 The door panels are made from the same mesh material that covers the airbag. The door structure can be clearly seen behind the mesh panels, which are held within a frame. The transparency of the knitted mesh changes according on the angle of view, adding a further dimension to the interior’s appearance. The pull handles in the door shoulders are made from wound climbing rope and, together with the matching seat belts, liven up the interior with their bright orange finish. Like the pull handles, the door openers in milled aluminium are housed in the cork door shoulders and provide a high-class finishing touch for the door area. As the eye wanders further up the door, it arrives at the exposed airbag unit in the roof pillar. This has the same effect as the visible cable routing in the interior, deliberately drawing attention to functions that are normally concealed during manufacture and employing them to aesthetically agreeable effect.